The search for the right vintage preamp.

Thought process can be fun, even when a bit foolish.

I’ve been using an Adcom GFP-565 preamp for three years in my main system, which I built around the notion of “what was cool and obscure in the late 80’s, 90’s and 00’s that I can afford.” But it has developed some problems and needs some time in the fixit pile. So, I'm aiming at post-70’s hi-fi boom, pre-HT dominance, when “stereo” was still a word.

1. Active gain—it needs enough output voltage to fully drive an incoming Buckeye NC-502MP amp, which has an input sensitivity of around 2.8 volts as I recall for single-ended inputs. I have old sources rated for hundreds of millivolts of output, and some that put out two full volts (all continuous and RMS). The Adcom amp meets its spec at 4 volts continuous RMS (with peak RMS at 10 volts), so that became a requirement.

2. EQ/processor loop. My PEQ is an external unit, and I use it with analog sources so computer EQ doesn’t fulfill the requirement. I don’t want to use a tape loop for this—it’s a pain having to use dubbing controls just for listening.

3. Inaudible quiescent hiss. I have to go on reputation for this—it’s never spec’d or even measured in most lab tests.

5. Respected phono input with low and adjustable loading. The Adcom’s phono input was spec’d at 100 pf, but my cartridge is reportedly happier with less than 200 pf of total capacitance, and I doubt my arm wiring and cables were low enough to achieve that with the Adcom. 50 pf in the preamp input would be better.

6. At least one tape loop. I have been running my ADC and DAC through a tape loop, but I never monitor so any record bus output I can Y off of will work for that. I have a dbx 400x for integrating various tape decks into that tape loop, and it provides full deck-to-deck dubbing (even though that isn’t a use case for me).

7. Balanced outputs if possible. What I ended up buying didn’t have them, but it was an optional add-on, so I might be able to implement it. I can deal without it.

8. Source inputs for computer, two CD players, tuner, turntable, plus whatever else I’m playing with. That’s at least 5 line-level inputs plus phono.

11. Quality construction—good components, discrete where possible for maintainability, such as 1% precision resistors, film caps, and so on.

The GFP-565 fits the theme well, but the source switches are unreliable and I was ready for something different. Also, it’s op-amp-based, Walt Jung’s design notwithstanding. An Apt Holman would be perfect, buts it’s a dozen years older. There are surprisingly few full-featured preamps from that later period, especially with upmarket pretensions. Onkyo and Kenwood offerings didn’t fit the theme (I own both in other systems).

I’ll report when the jury comes back.

Sounds like you found a nice piece of vintage gear. Give us a report when you have a change to sit down and enjoy your new B&K.

I also love vintage and have a mixed bag.
OP
R

So, the jury is back, and the verdict is favorable, but it took a lot of deliberation.

The Sonata series from B&K was intended to be their “audiophile” line, where they used components intended to impress those who look for other signs of quality than the emerging signal, which B&K already had under control. The MC-101 Sonata was their top-of-the-line preamp, basically the same as the Pro-10-MC Sonata but with (defeatable) tone controls.

The feature set would have met my needs a bit better with two tape loops, but then I have a recently acquired dbx 400x that I could put into the system to expand the record bus, so I could live with one tape loop. It has a defeatable processor loop, too, which I did require. The Pro-10-MC preamps I’ve seen lacked this feature. 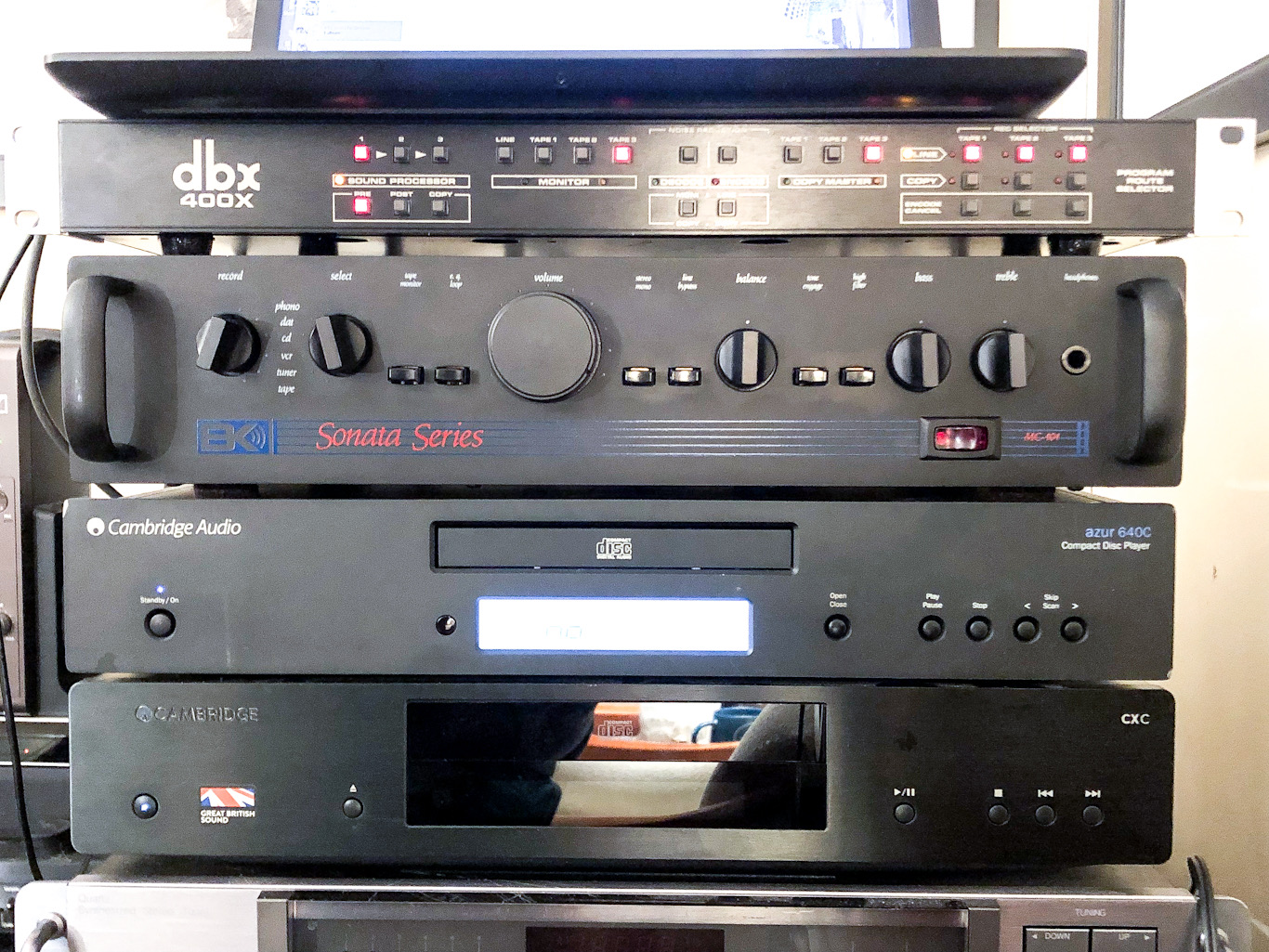 The power supply is divided between a separate box that houses a toroid transformer, connected to the preamp using a cable with a DIN connector. The transformer reportedly provides +/- 25 and +12 VAC, which is rectified, filtered, and regulated in the main enclosure. Caps here were Arcolytics, not exactly what I would call a high-end brand, but better I’m sure than later low-budget caps from Chinese suppliers. Most caps in the preamp’s signal chain were polyester film caps. 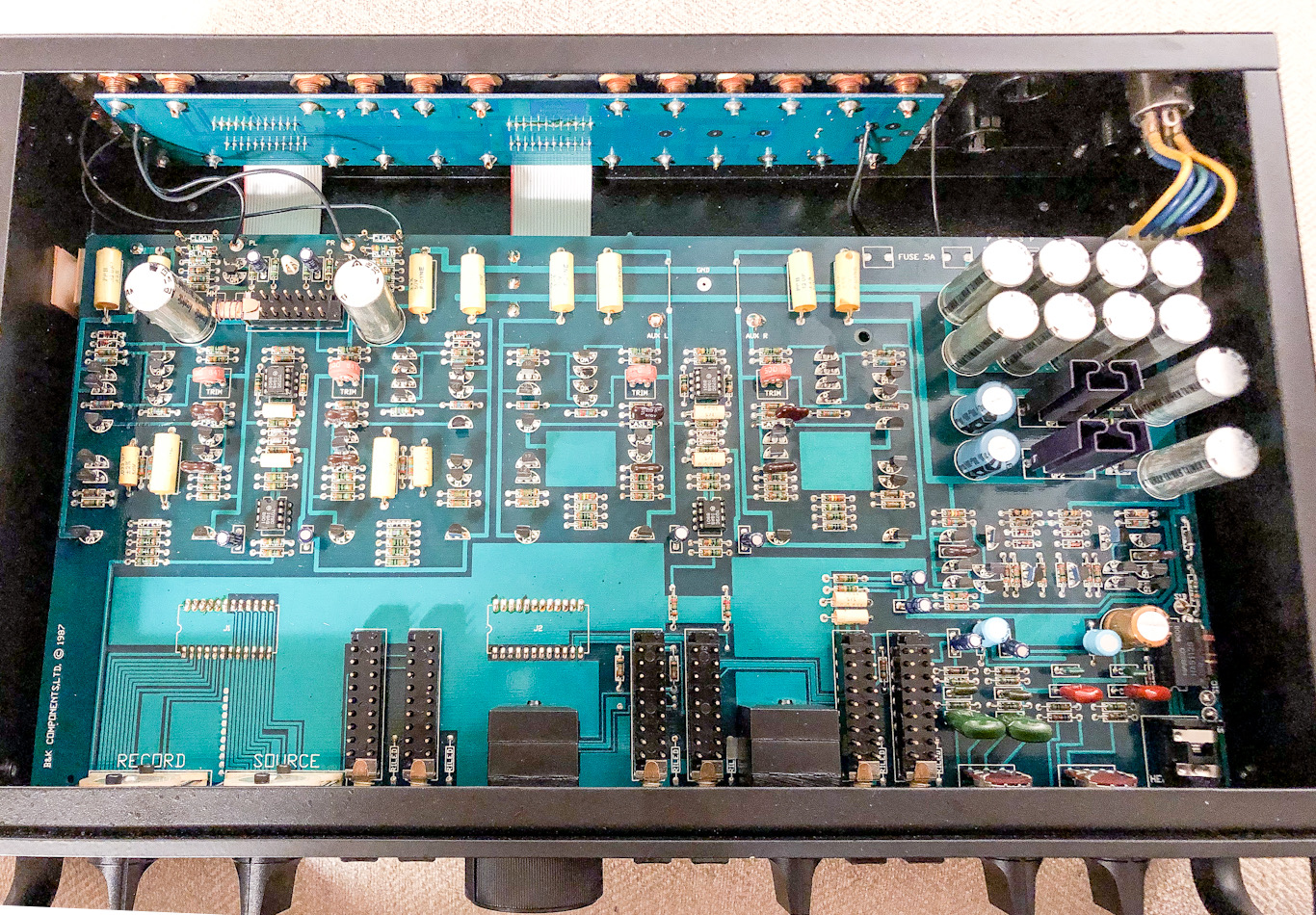 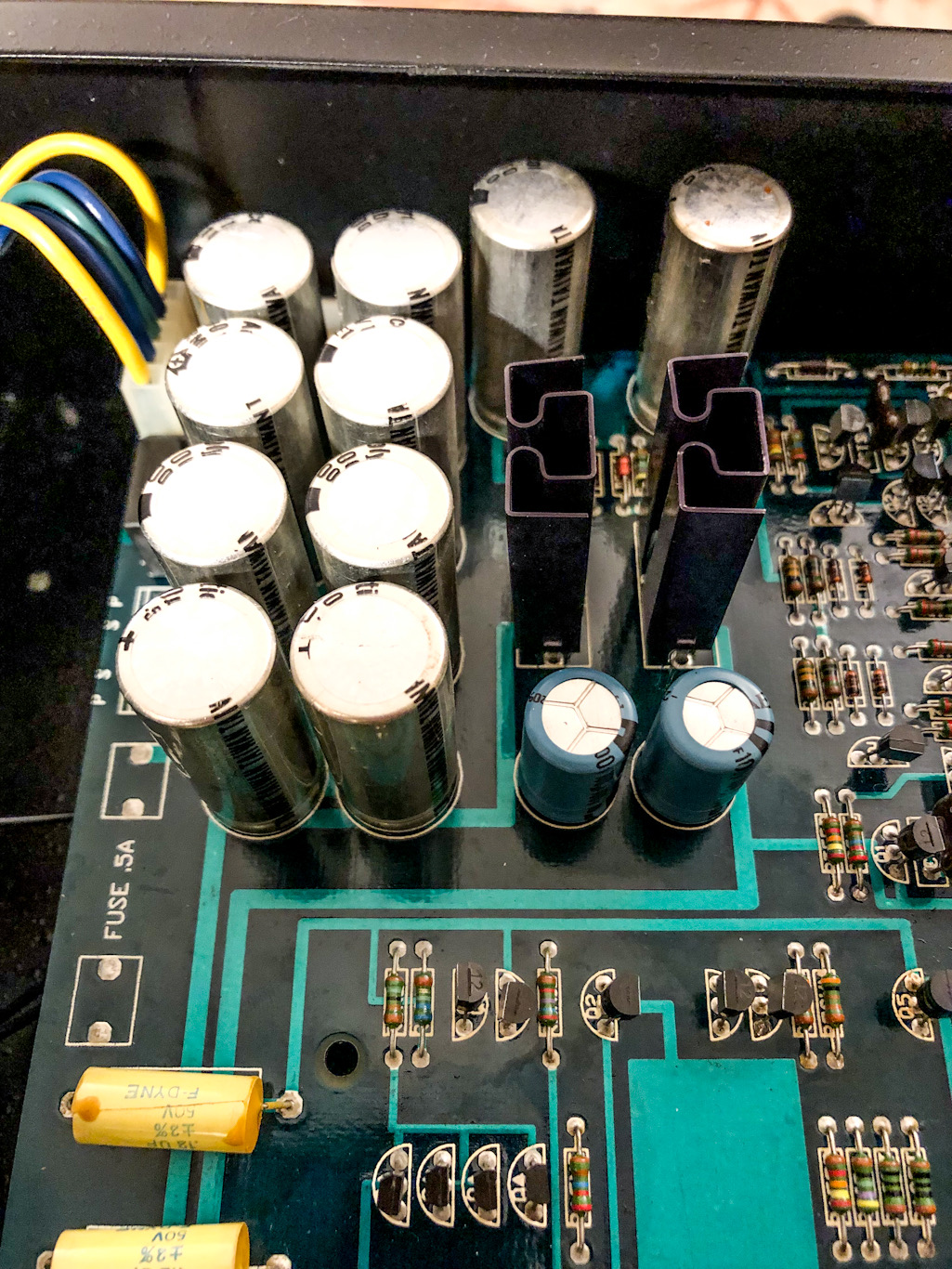 But I do see op-amps, so it’s not entirely discrete. The latest were dated 1990–right in the target zone for my theme.

EDIT: I read from @restorer-john that the Apt Holman used TL072 op-amps, and that's exactly what we find here, in the Motorola version.

The inside was spotless—too spotless. It had been serviced, which means the opportunity for error.

And sure enough, I found two. The plug panel connects to the main board using two ribbon cables. Pin 1 of the one in the middle carries the left channel of the Tape Monitor jack.

And there was no sound in that channel. I pulled off the header plug to check the pins, and Pin 1 was simply gone, apparently broken off. The seller wasn’t using the tape loop and didn’t note the issue from when he had bought it. At some point, I’ll find a new DIP header plug—maybe—but for now I made it work by drilling a hole in the plug, soldering the lead from an old capacitor onto the wire (which I separated from the ribbon) and poking it through the hole into the socket. Problem solved.

The other evidence was that the main output signal wires were reversed—for the outputs, right and left were reversed. Oops! That’s easy to live with—I just plugged the amps in backwards.

The source/record selectors are wonderfully easy to clean with DeOxit, unlike the slide switches used in the Adcom. 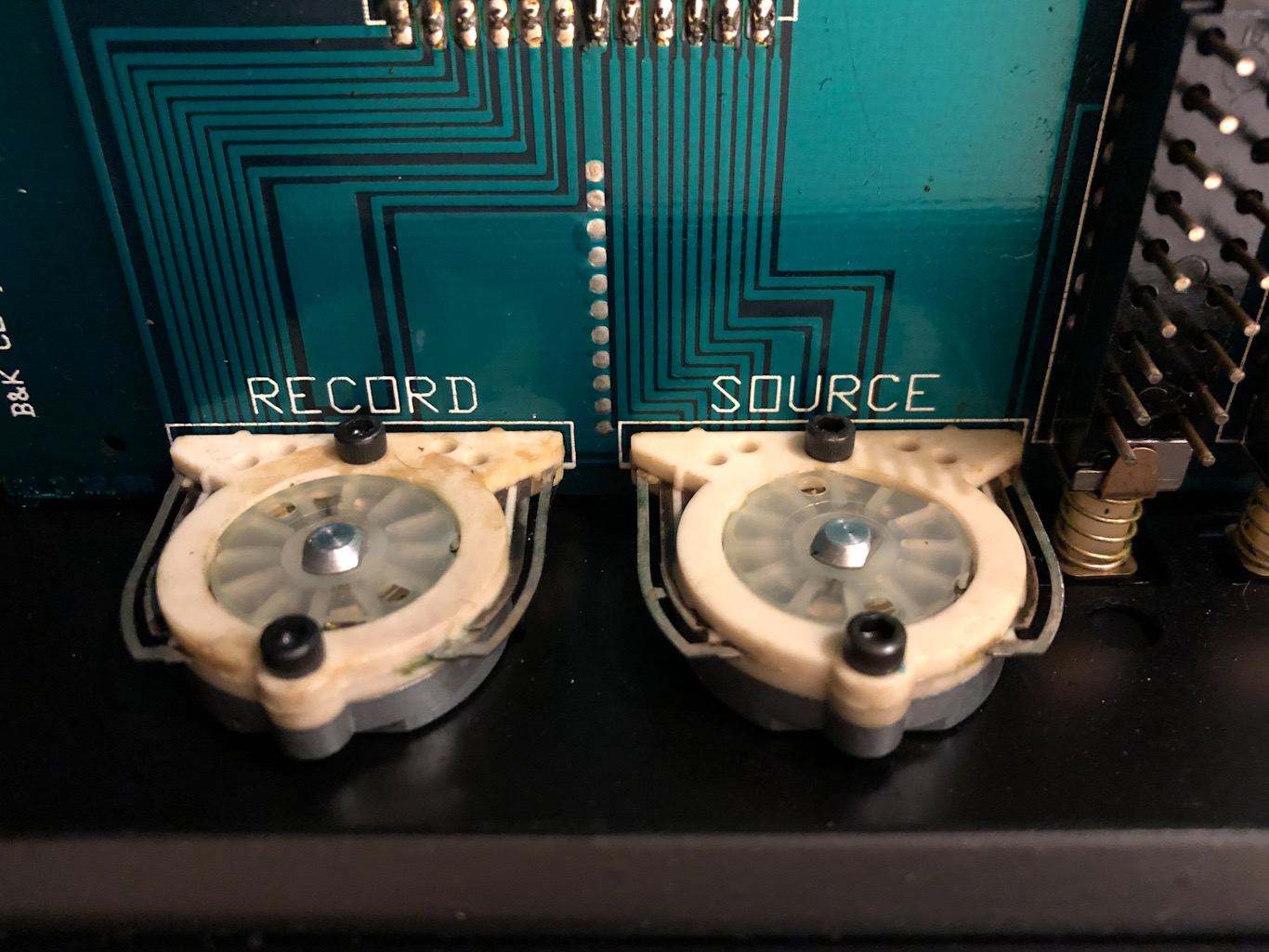 Balanced outputs were an option, but I’ve not seen an MC-101 with them. The Pro-10 balanced output device (which I’m sure is the same) had its own board, with male XLR sockets mounted In lieu of these blanks: 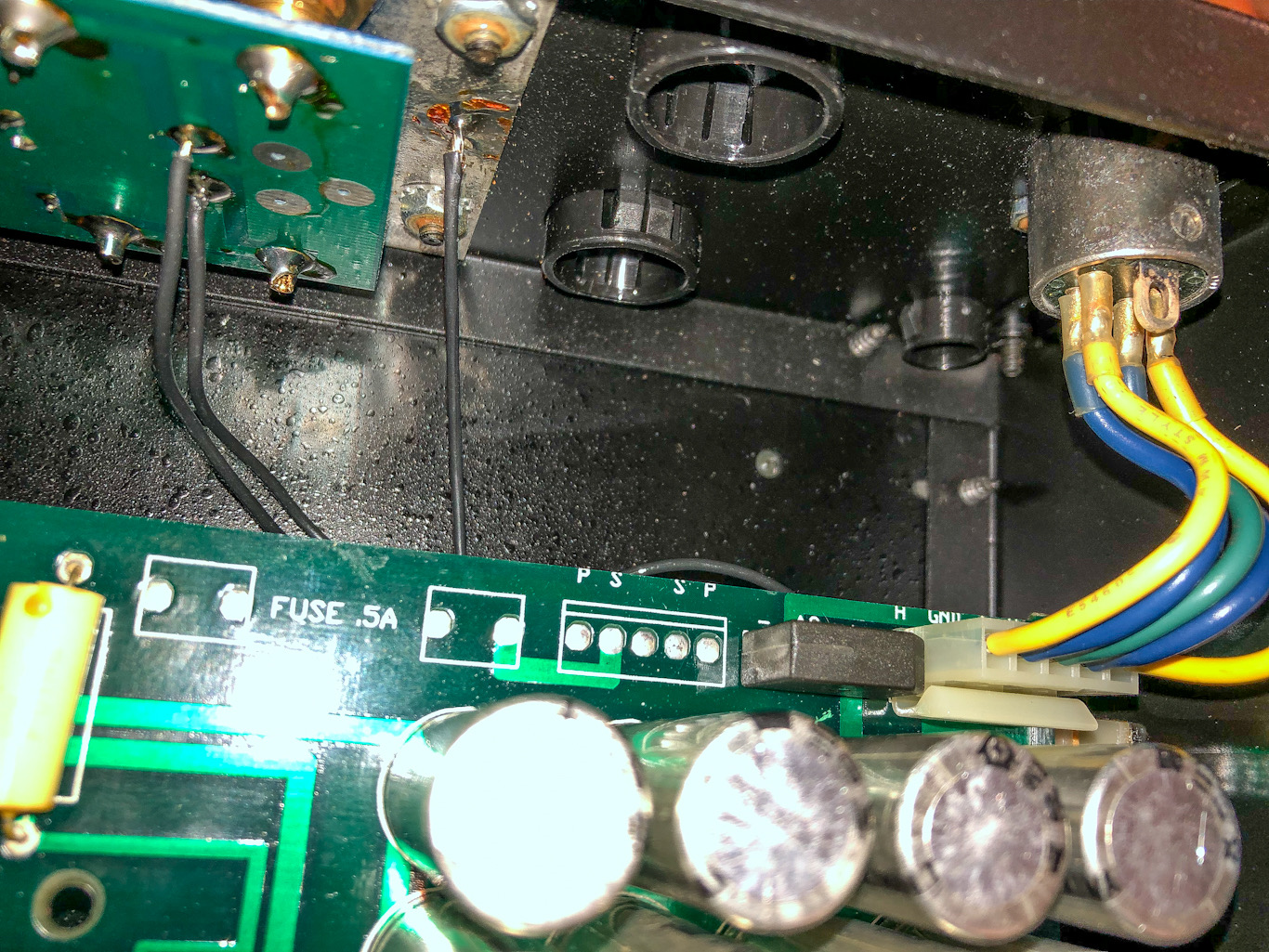 I’m thinking I’ll die of old age before finding the upgrade kit, so I’ll just use the RCA outputs and be happy.

The phono section was highly regarded, and the loading is adjustable using an inserted cap and resistor. It comes stock with no cap (base output capacitance is under 75 pF) and a 100K resistor, which provides about 47K of loading using the formula they provided in the manual. There is a slide switch for selecting between MM and MC cartridges. My AT440mla reportedly likes 200 pF and 39K of loading resistance, so I have something to play with. Comparing records to prior needledrops made using the Adcom preamp (275 pF and 47K) revealed a boomier, louder deep bass with the Adcom, but a more realistic timbre and more clarity (both probably related) with the B&K. The comparison was made difficult because the B&K phono preamp isn’t driving this cart to very high levels. It’s easily loud enough, but maybe 5-6 dB softer than the normalized needledrop through the DAC input by my estimation. 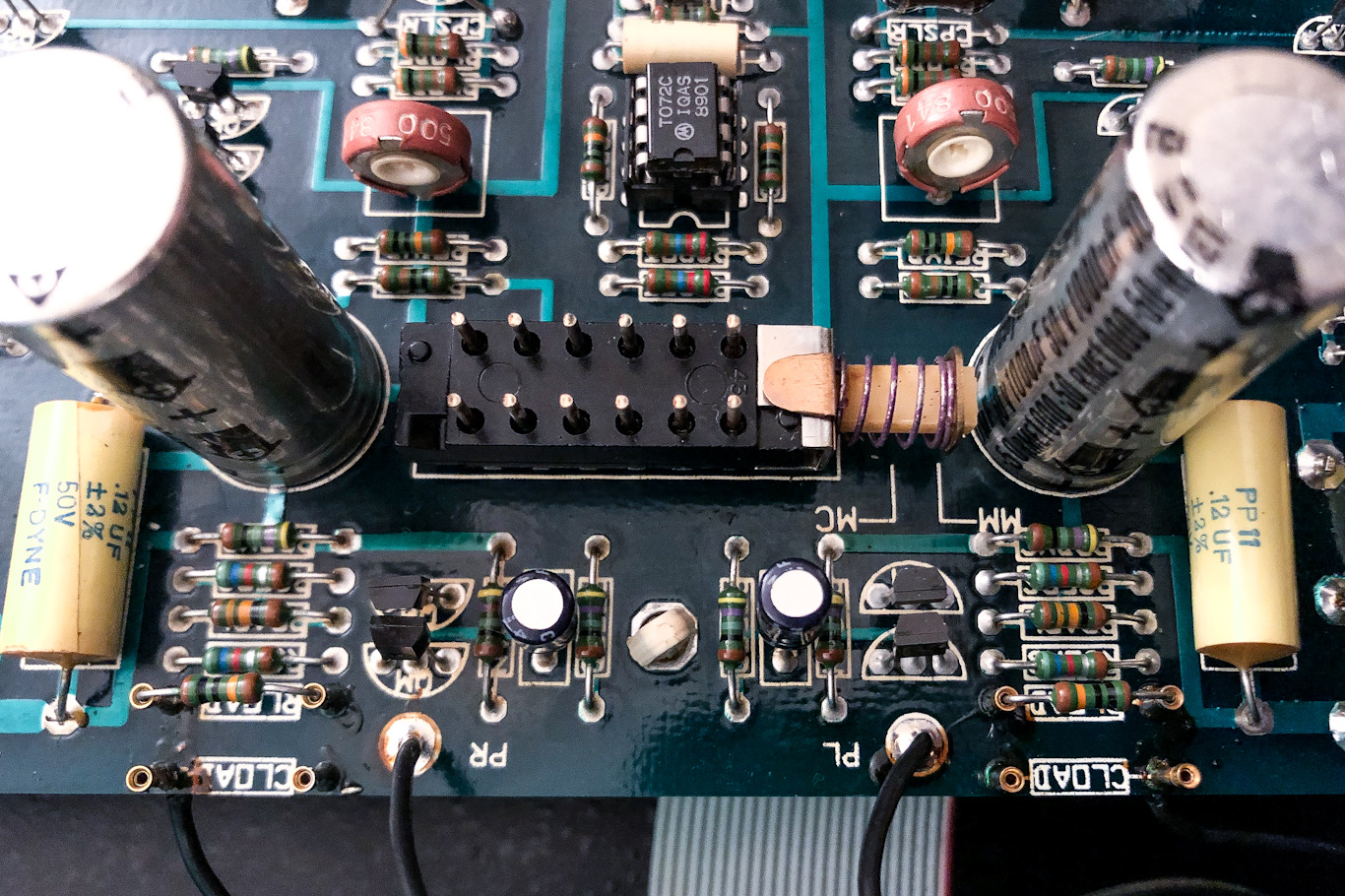 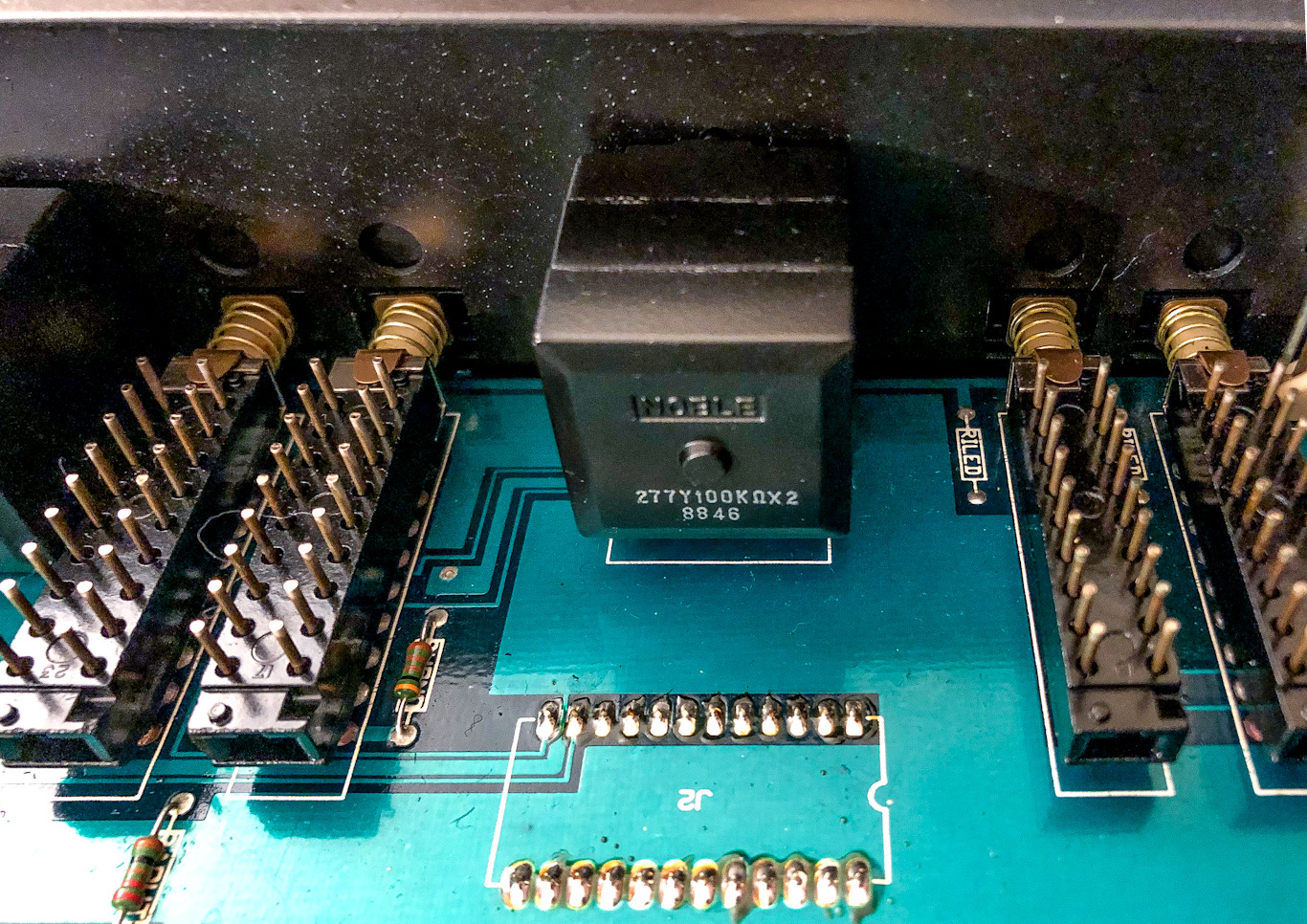 It has an abundance of inputs. I wired the tape loop to the dbx 400x. It supports three external processors, two noise reduction units, and three tape loops with full dubbing. The Nakamichi cassette deck is in the Tape 2 loop, and the Teac is in the Tape 3 loop. the Tape 1 output goes to my Benchmark ADC for recording analog stuff to the computer. I wired the output of Processor 1 to my JDS Labs Atom headphone amp. If I set the processor to come before the tape loops (“Pre”), the line in and tape playbacks go out the processor loop and I listen on headphones. If I set the process to post-process, the line in skips the output to the Atom and feeds the record bus outputs of the 400x. The Record selector switch on the preamp tells the dbx 400x what to listen to. If I want to hear a tape, I just need to press the Tape Monitor switch in the preamp.

Line inputs include Tape (separate from the Tape Monitor input side of the tape loop), Tuner, VCR ,CD, and DAT. I connected the computer-fed DAC (V90) to DAT, the CXC-fed DAC (E30) to VCR, the 640c to CD, and the Carver to Tuner. Plus the phono input, of course. That leaves a spare input for playing, plus two switchable line-level outputs from the remaining processor loops in the 400x.

If someone wants to use the stereo, I say “sure”, depending with confidence on the repulsive force of sheer complexity to defeat their attack.

The preamp also has a defeat switch for the line amp, for passive operation, limited to sources that output enough drive voltage. I doubt I’ll use that.

There is but one relay on the board (I seem to always have problems with relays in preamps), and it switches the line amp output between the main outputs and the internal headphone amp. The head amp seems decent enough—I haven’t yet detected a difference between it and the Atom, except that the Atom has more power.

At some point, I’ll throw my SSVM on it and measure its noise output. I’m my house, it’s quiet enough.

The sound seems transparent to me, and the specs are conservative. The op-amp’s worst distortion is in the top octave, and that’s what B&K reported, but distortion in the audible range is in the -90 dB vicinity according to the op-amp data sheet.

Nov 17, 2022
atmasphere
A
I
Integrated that can subjectively compete with Benchmark stack?
2 3