I’m working on an ADC device and I’d like to analyze the resulting PCM data. In toying around with power supplies, input buffer op amps and layout I’d like to start some objective analysis and my plan is to hopefully acquire a suitable signal generator and create a way to measure the results in the PCM data itself. I’m wondering if I can analyze THD (performance of different oscillators as well) in the resulting PCM without MATLAB and curious if there’s some other solution for that (on a Mac) as well.
Thanks in advance for any advice.

I was just about 100% sure that I had seen discussion on ultralow distortion oscillators somewhere on diyAudio, but couldn't find it in a hurry... but did find something on the EEVBlog forum instead. If you need a fixed 1 kHz generator, I think SOTA is -140 dBc or better... you can always run a low-distortion Wien bridge job through a bandpass after all, and opamps have gotten pretty good.

When it comes to FFT, I would give trusty REW a shot and see whether that meets your needs.
My audio 'blogalike' | Audio DAC and ADC History | Helpful Audio-Related Calculators
A

I expect that the least amount of work may be a good (enough) DAC, i.e. Topping E30, with a narrow single/dual stage bandpass filter (you will need to make a few). Perhaps a USB isolator, a linear supply and some well placed additional capacitors in the Topping can get you a few more db but without the tools to measure, you will never know. If you parallel the output of both channels (appropriately), that may lower the THD a bit more. 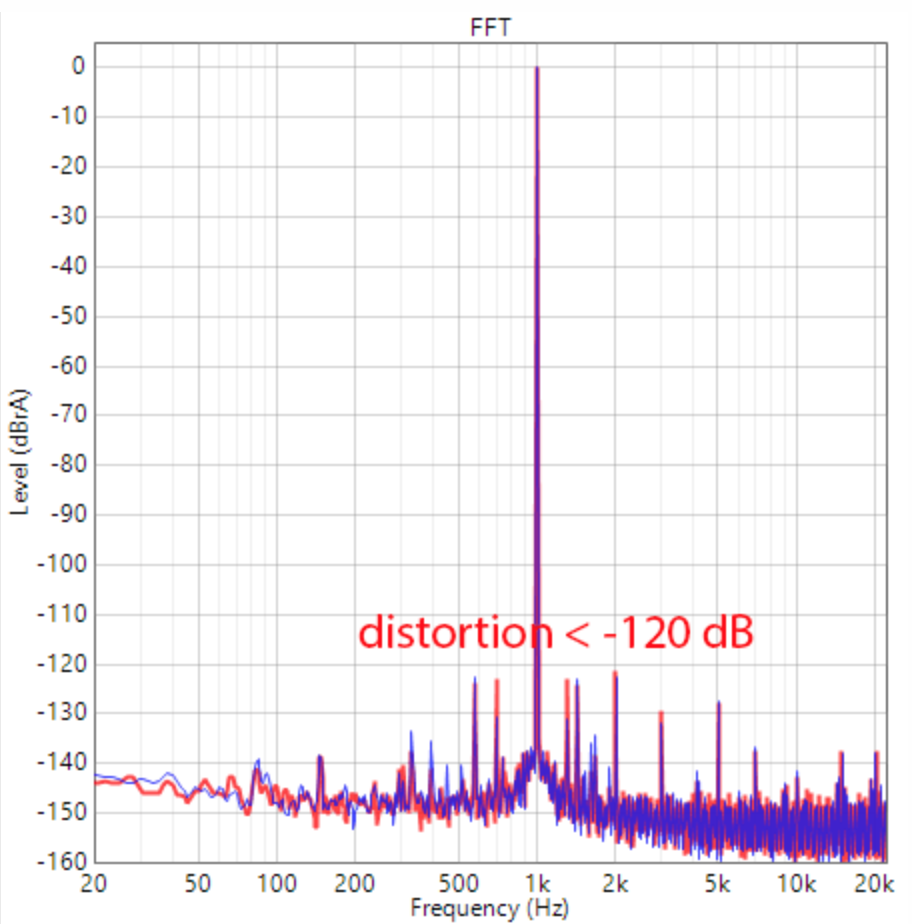 Depends what you mean with "low distortion".
This is probably best 1kHz oscillator available, so called Viktor oscillator. Beats even AP analog gen.
Home | ULD audio (wixsite.com)
Another really good performer:
EOSC10Kv3 - LT AN67 10kHz oscillator : new updated version ! - diyAudio
But you are limited to single frequencies. If ~120dB is sufficient for you, high quality DAC would allow measuring THD at different frequencies or other things like IMD, multitone and etc.
OP

Thanks for the responses!

I am confused by the role of a DAC for testing the ADC performance. I think my issue is an overall lack of understanding as to what gets baked into the PCM (or even DSD) data. Specifically jitter. If I understand correctly, the only way to correct this jitter would be to assume that the ADC attached a (very long) time stamp to every sample —this is obviously not possible. I think I once read that the MQA people claimed they could “correct” this if they knew what ADC was used at the studio or for the a digital master transfer. That sounded absolutely insane to me.

I have a pcb coming for the cirrus CS5361 and was mainly curious how the device would respond to different oscillators (mainly Abracon, some NDK and other far less expensive). Their CS5381 (same pinout) dev board has a crystal socket even (intended to be able to change sample rates, etc) that I thought would be fun to experiment with. However, clearly according to @amirm ADC tests the winners of the ADC world are utilizing more than a simple XO. Yet also, the Cirrus Logic engineers didn’t find this necessary to achieve the results in the data sheet with regard to SINAD or at least were unscrupulous enough to omit this haha.

By the time an (arguably) unstable clock has baked it’s poorly divided slices into PCM data even the most accurately clocked DAC is just going to properly distribute the slices and rewrite history, right? There is no contract between ADC and DAC — beyond that I still cannot figure out how DSD offers any advantage on the ADC side other than possibly introducing less jitter in the first place because it’s slightly less demanding on processing.

I have just recently seen “time smear” used on audiophile sites. Is this the marketing term for the history rewriting? I’m not asking if it’s audible…just trying to figure out what they’re referring to.

I’m going to download REW now thanks again!
A

There are many methods to alleviate the effects of jitter on a DAC clock. Obviously one method is just to provide a really good clock but a more reliable method is to inject fixed amounts of charge into an output based on a digital value. I e some AKM converters use a capacitive charge coupling method. The amount of charge injected is dependent on the digital value not the timing. A similar method can be done with resistors where the charge pulse timing is constant dependent on digital value of course but independent of the exact timing of the input clock. There is still some jitter dependence due to the exact timing of the charge injection, but as the value of the injection is independent of the exact clock timing the effects of jitter are significantly reduced.

You can with some gear lock the clocks together between ADC and DAC. Of course this will cover up any real jitter so this isn't a method to measure jitter if that is your specific concern. With free running clocks on both devices the result at the ADC is going to be combination of DAC jitter and ADC jitter. Free running crystal clocks are going to have less jitter than an AES/EBU or SPDIF linked DAC.

Honestly unless gear design is badly mangled I doubt jitter levels are anywhere close to mattering about sound quality.

In any case, you won't get less jitter in the ADC input that is coming from the DAC. So the DAC needs to be a low jitter, low distortion design. Most USB DACs have the output clocked by a free running clock at the output which is in general the cleanest way to do it.

I do think REW will do what testing you need. It might end up better to run it on two different computers one connected to the ADC and one to the DAC. There are fewer pitfalls to running both DAC and ADC from one computer on the Mac side of things.

Just looking at Amir's tests of DACs, those with the best jitter (and generally best everything) were the newest RME, Benchmark DAC3, Okto Research DAC 8 stereo, and the SMSL M400. I may be missing some others.
"The real purpose of the scientific method is to make sure Nature hasn't misled you into thinking you know something you don't actually know." Robert M. Pirsig
OP

I am only interested in the ADC side which I was hoping to measure SINAD with a very reliable and quiet analog signal generator. I guess my confusion (even more so now) is why a DAC keeps coming up. I must have missed something but I will read the thread again.

Scipy library has a really cool fft package and another I found with a GUI is wave pad.

EyPee said:
I am only interested in the ADC side which I was hoping to measure SINAD with a very reliable and quiet analog signal generator. I guess my confusion (even more so now) is why a DAC keeps coming up. I must have missed something but I will read the thread again.

Scipy library has a really cool fft package and another I found with a GUI is wave pad.
Click to expand...

I think DACs keep coming up because people are thinking a good high quality DAC is likely to provide cleaner source signals than most analog signal generators will manage. Certainly the best of them can provide signals so clean it is difficult for any ADC to measure their true limits. Since such things are available for $800 or a bit more, it is a simple painless way to generate your test signals.

I'm not up to date on what kind of analog signal generators you can get for around $800 these days. Maybe those are the better way to go.

As for using various pieces of software, at least try out REW (it is free) and is quite capable for measuring things these days. Send your ADC data to it and you can measure all sorts of things with very high precision which is only limited by the gear not the software. With a laptop running REW, and ADC and a signal generator you can measure pretty close to whatever you want. Wave Pad is a better editor, but it isn't as good as REW for testing.
"The real purpose of the scientific method is to make sure Nature hasn't misled you into thinking you know something you don't actually know." Robert M. Pirsig

EyPee said:
I guess my confusion (even more so now) is why a DAC keeps coming up.
Click to expand...

Got it! Thank you. I didn’t realize the DAC would be such a great signal generator. This makes a lot more sense now!
A

Don't forget what I wrote above. If you apply a narrow pass band filter after the DAC they take something already pretty good and make it a whole lot better.

Theres quite a bit of discussion on the topic in the howto: distortion measurements with REW thread at DIY audio

I think the numbers shown here are a pretty good indication of what a CS5361 is capable of (and the pitfalls of its big brother CS5381)... H2/H3/H5 at -110 dBc or so. The implementation to beat may be the trusty Asus Xonar D1. Not a bad little ADC at all, although with a practically obtainable dynamic range of about 111 dB(A) it has never been more than a good midrange part even at introduction 18 years ago. Not the greatest antialias filter of all time, but quite good when used at a minimum of 48 kHz. I think the CS4272 ADC part is much the same thing, and that codec is super common in audio interfaces (Focusrite alone must have used tons of them in Scarletts and whatnot, and don't forget the Behringer UMCxxxHD series).

I would not expect any major differences between different crystal oscillators... they should virtually all be plenty good enough for audio. The fun starts when you're using a PLL in clock generation, as a number of devices are. If you want to test jitter, best use something like 10 or 12 kHz for more revealing results.

Some DACs Amir has tested have in fact been wildly good... I'm talking 1 kHz distortion down at -130 dBc or so.
My audio 'blogalike' | Audio DAC and ADC History | Helpful Audio-Related Calculators
OP

Luckily the codec is a non issue for me as I’m just using i2s on a raspberry pi (pi as slave) and only at 96k. Oddly enough the CS4272 is what I remember finding inside of my (sadly) dead focusrite solo.

At one point on some other forum someone posted the inside of an RME ADI series which I believe was using a PLL in this way.

I’ve noticed as well that these usb-powered interfaces are probably never going to achieve even the CS5361 specs. Probably a better question for diyaudio but my suspicion is that I can’t get these numbers without a better supply and the op amps they specified in their application notes.

Thanks again for all of your help!
You must log in or register to reply here.

B
Questions for the Knowledgeable - APx555, Analog Filtering, and Test Signals

RME Babyface Silver Edition Measurements and Review (after 10 years of use :)