well, it only took a year, but here we are

so that said, the upstairs tv didnt get much love. so i ripped out a polk audio surround system and went searching. i realized i wanted a dedicated 2ch system for the upstairs, i wanted full range, so i wasn't totally set on any bookshelf style, and the bass needed to come out of something larger than a 6".

i pined over troels designs, and althought his stuff is amazing, it's expensive, maybe one day. the uluwatu was near top of the list, but the build looked a touch more complex than i wanted and felt you could get something similar with just a larger driver. the apollos and helix MTMs honestly probably would have been built if there wasn't a back order on parts at the time i was considering, but again, still wanted something with a large driver incorporated. and then i stumbled upon the tarkus, boom, lets go

i was then so inspired by the top most build on paul's tarkus page, and the wife liked it too, so i was sold 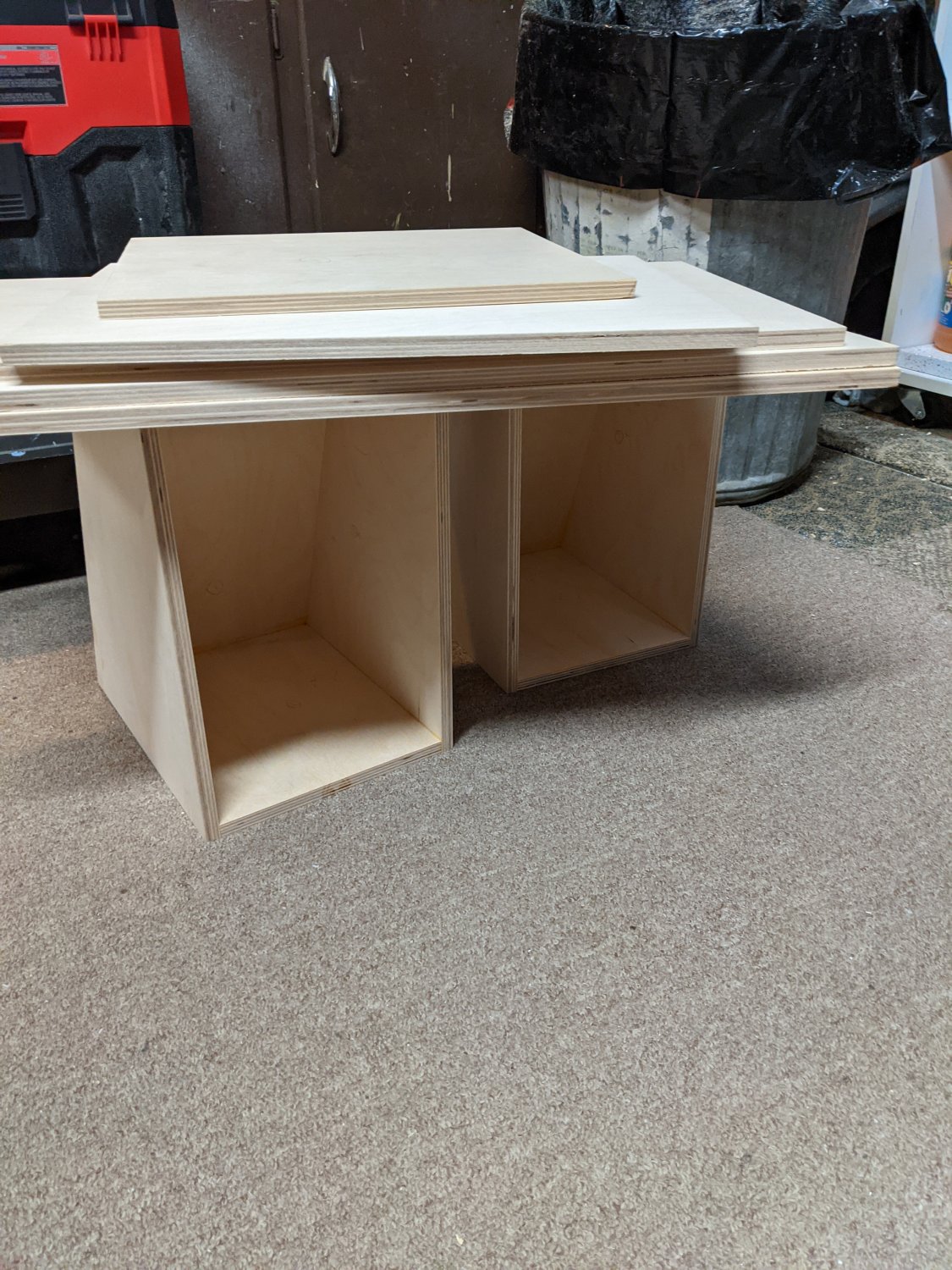 braces for the upper array, 3/4" dowel 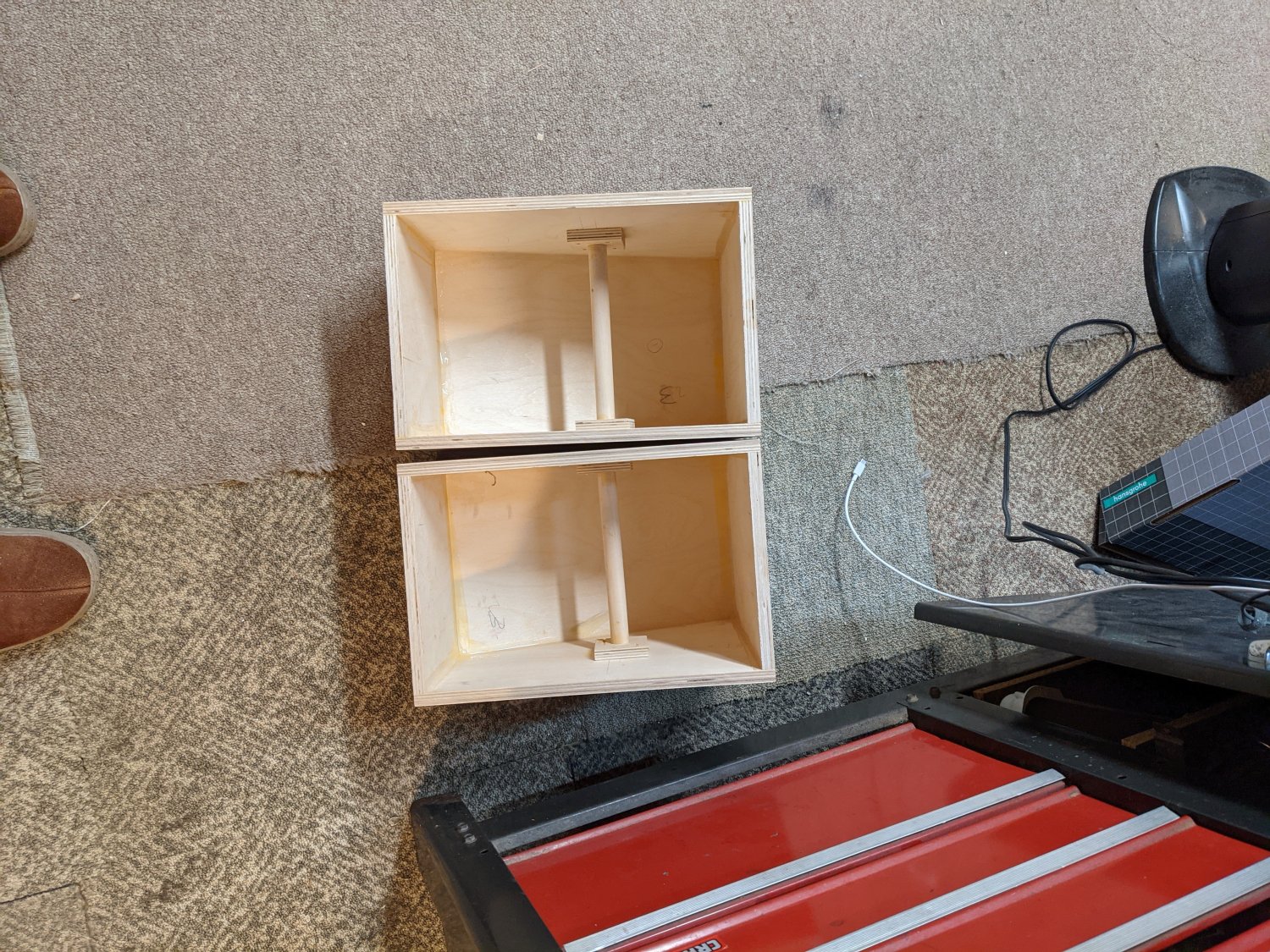 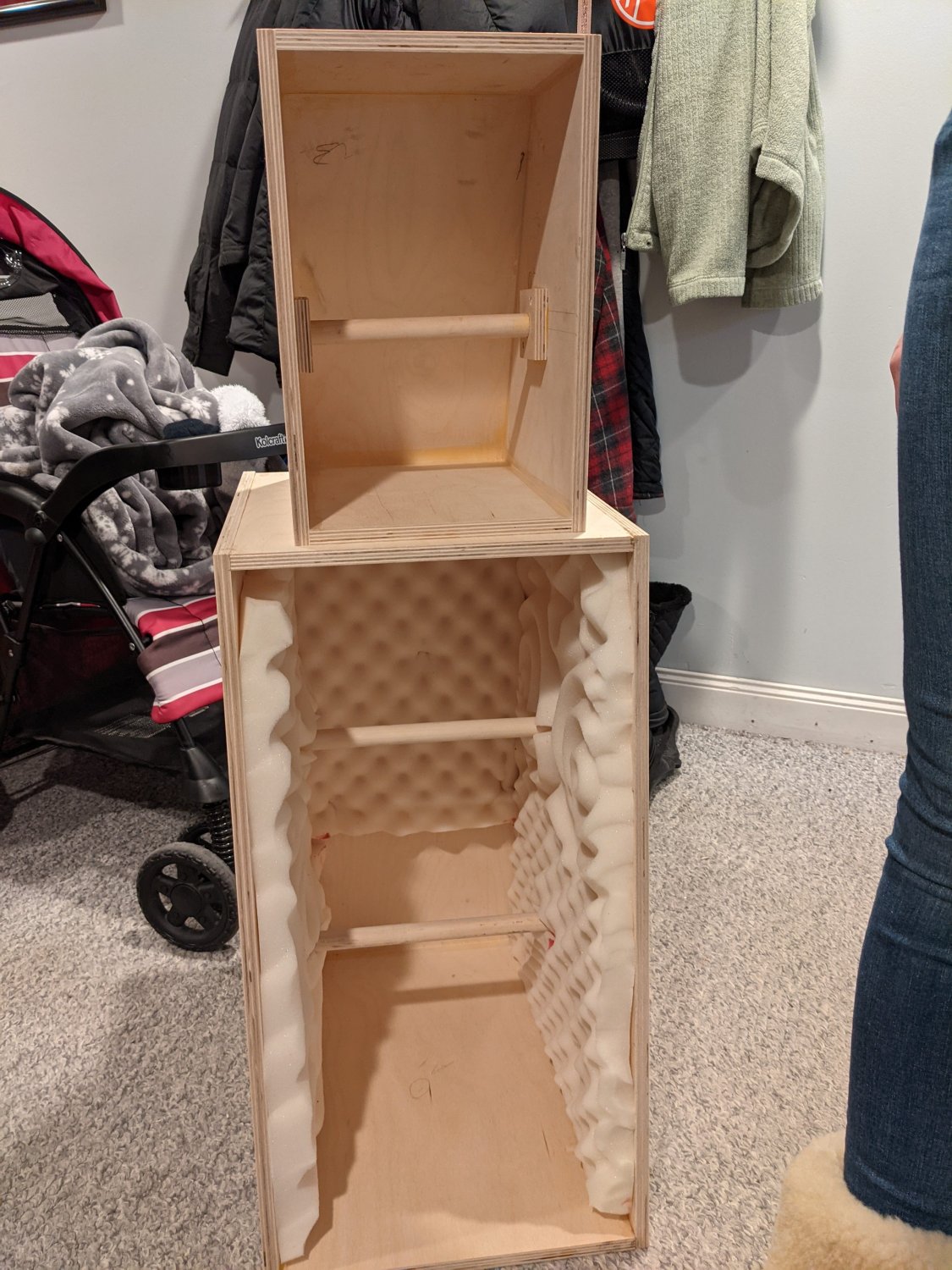 got this idea from another thread on attaching the port, basically we took and routed out the port dimension into a block of wood, glued the wood to the backwall, and used E6000 adhesive to glue the port in the hole 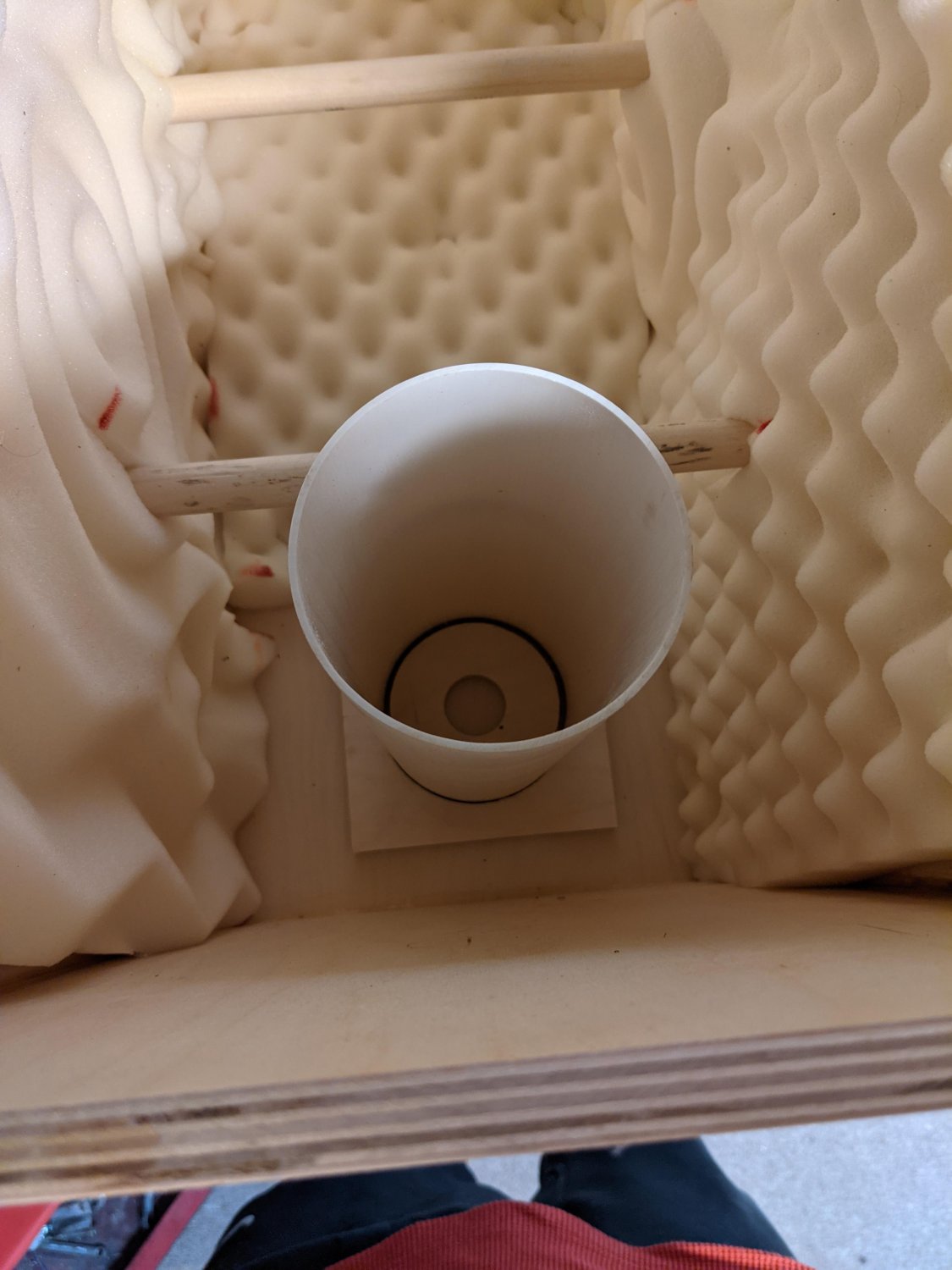 then just flush routed and put a round over on it, came out nice 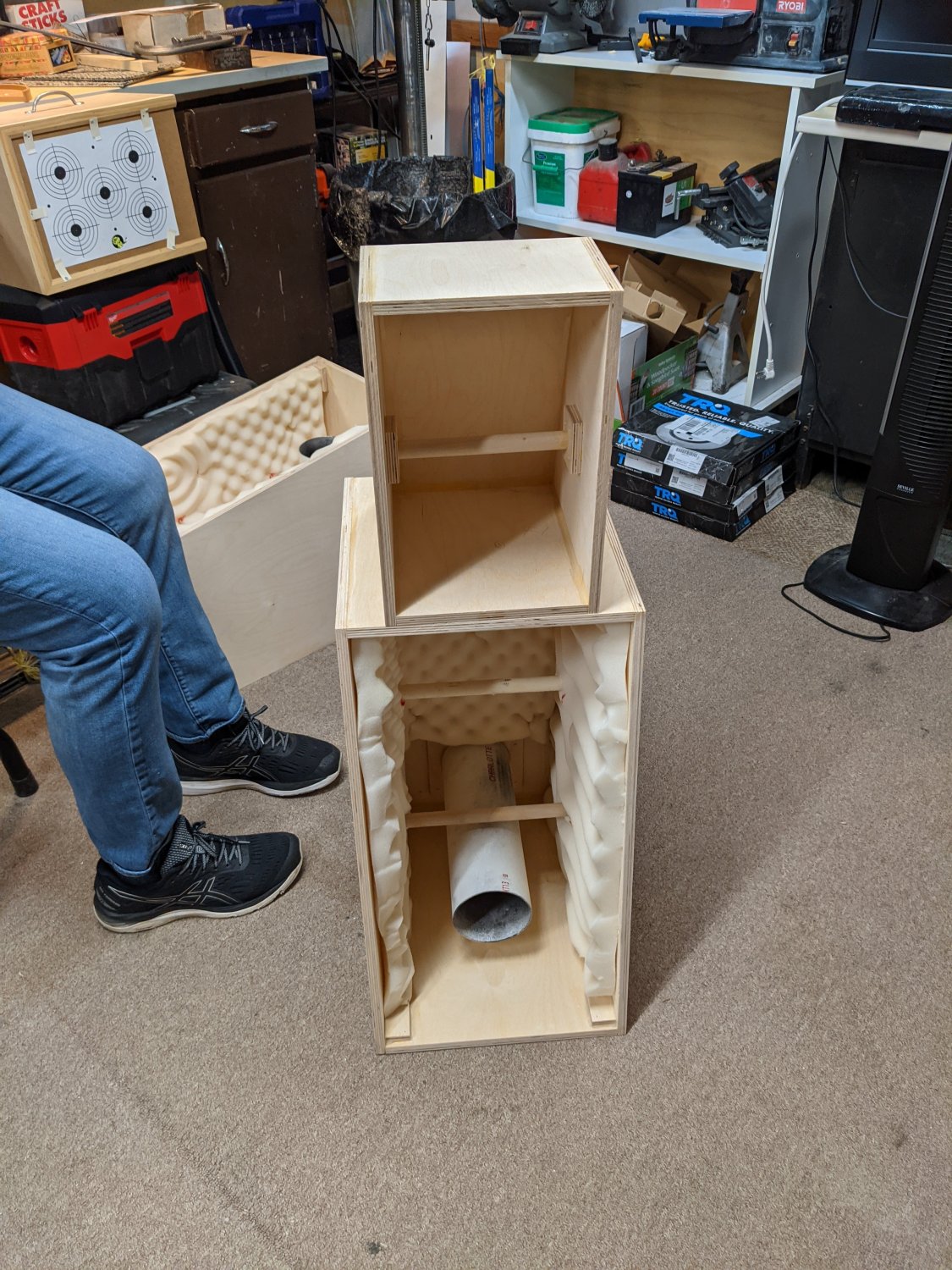 some crossover love, went with the zister resistors (also had some rpi heatsinks i put on them) and audyn q4 caps as a slight bump 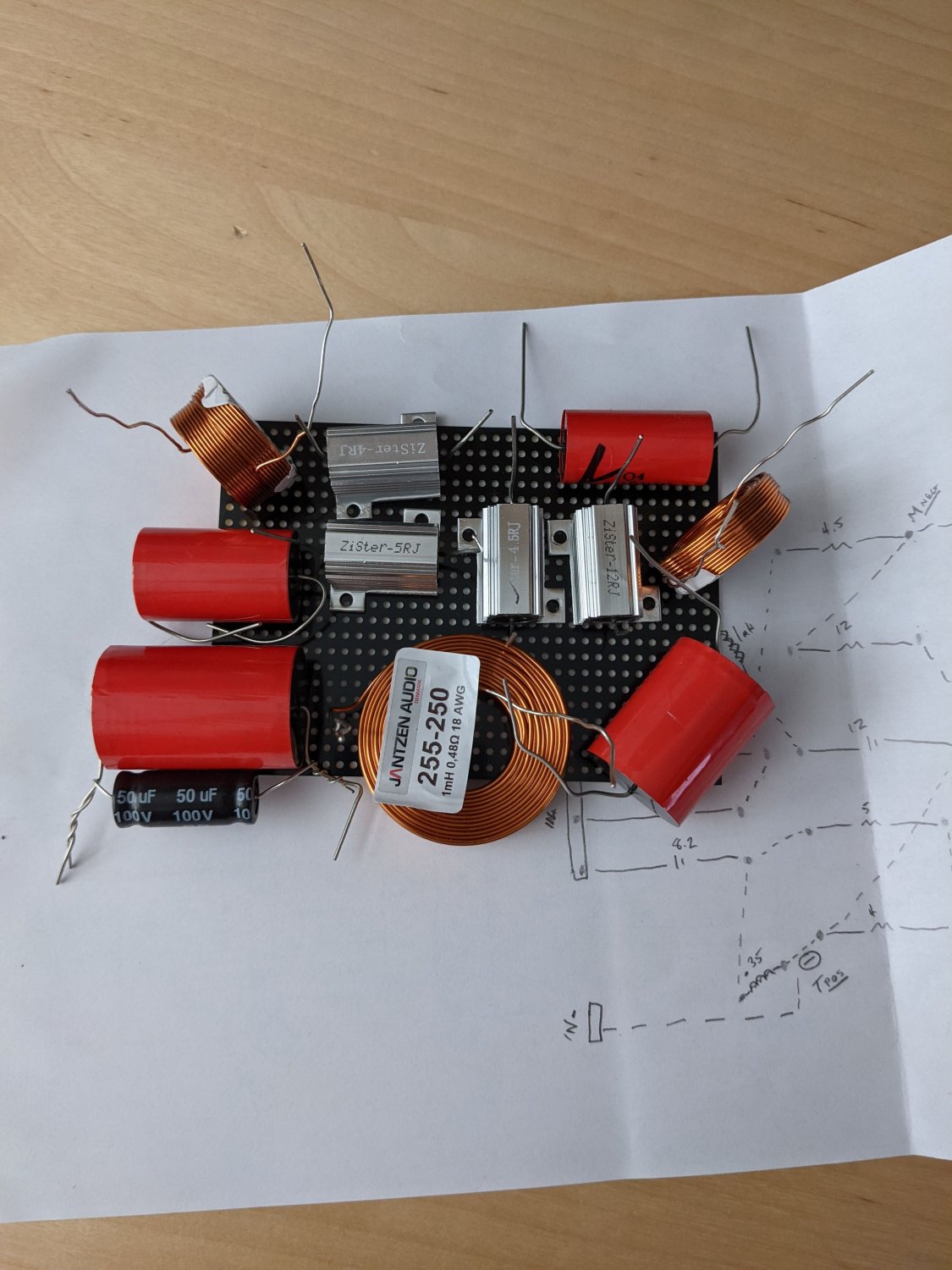 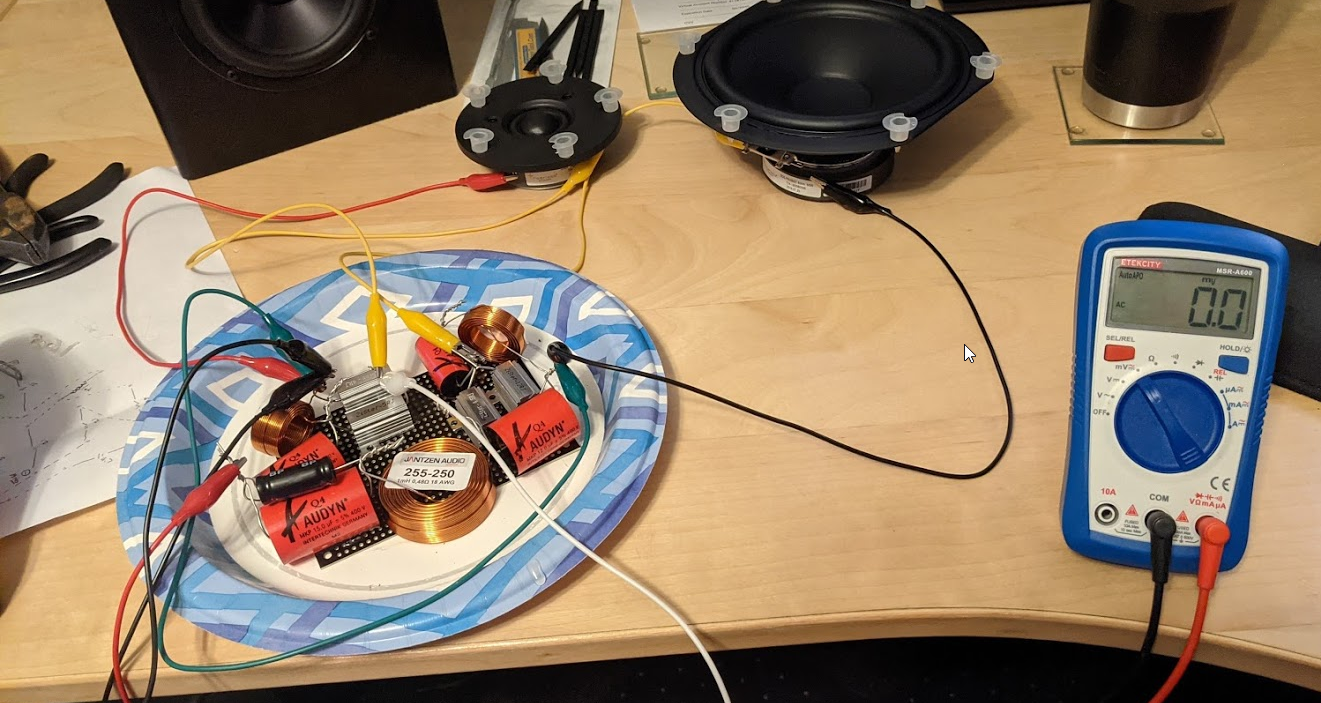 faces on, time for the finish 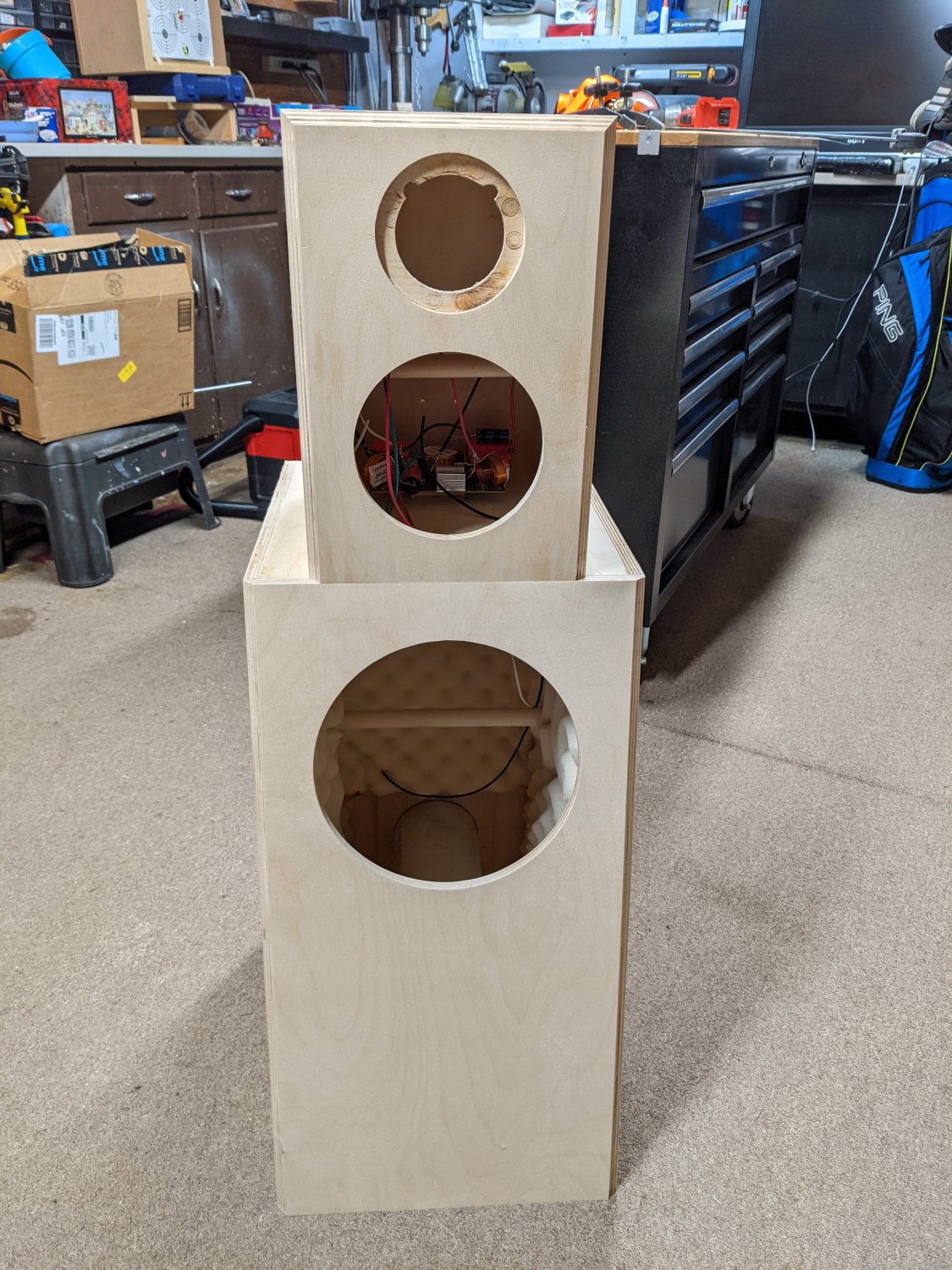 so we modeled it after the 'sunburst' build from the tarkus page, bolland83 i believe is the user name on parts-express

he did his with mdf, so adding the faux grain wasn't needed

baltic birch can be a blotchy wood, so we went with aniline dye (keda kit from amazon) and went with their straight brown. i believe we did 1/16th teaspoon per 1oz (bought these little 1/32 teaspoon scoops from amazon), mixed with water, sprayed with a HF HVLP Purple Gun

makeshift spray booth with a popup tent and 0.31mil plastic from amazon 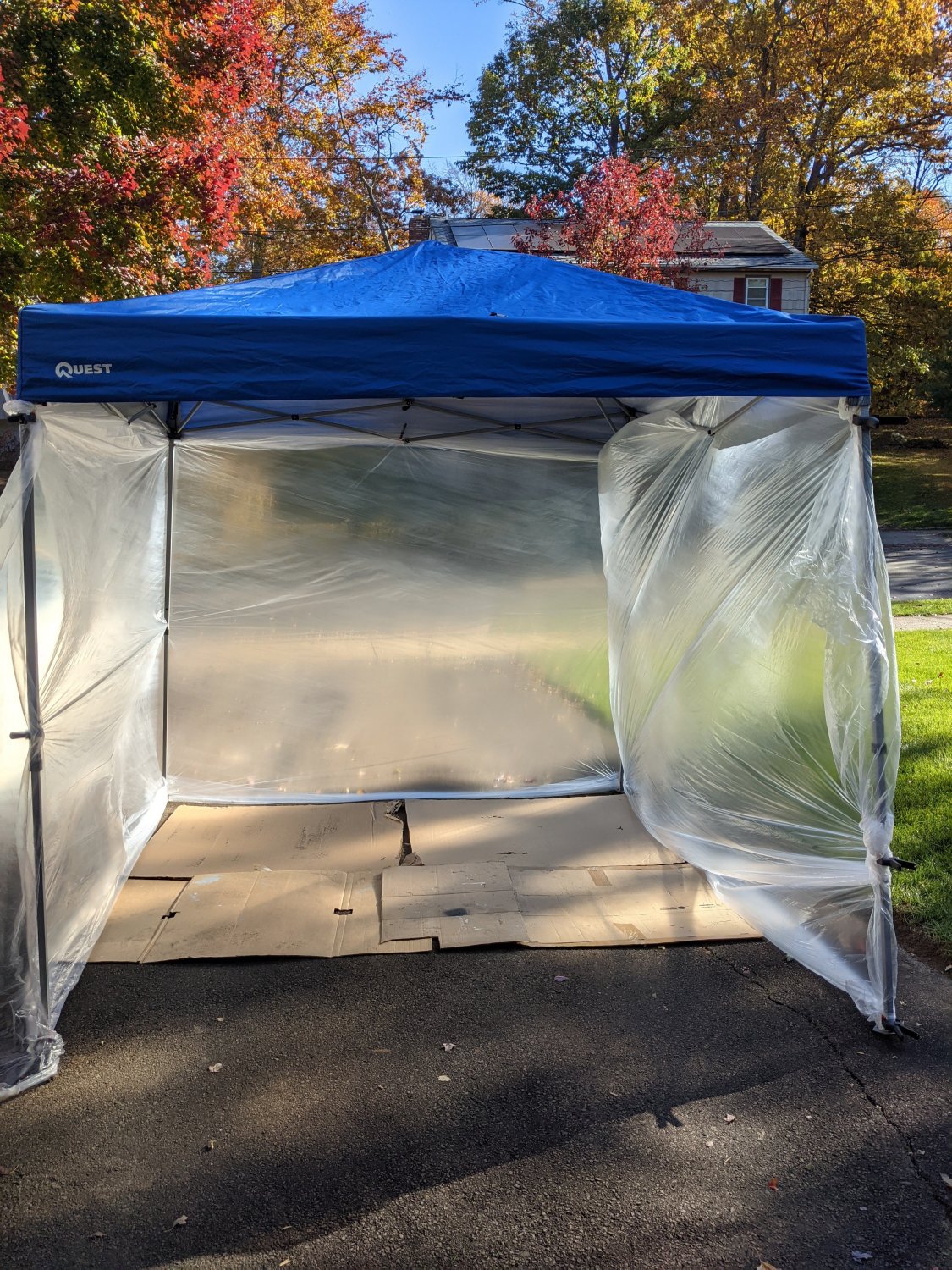 also had some scrap wood lying around, bought some lazy susan things, and made little spinny platforms 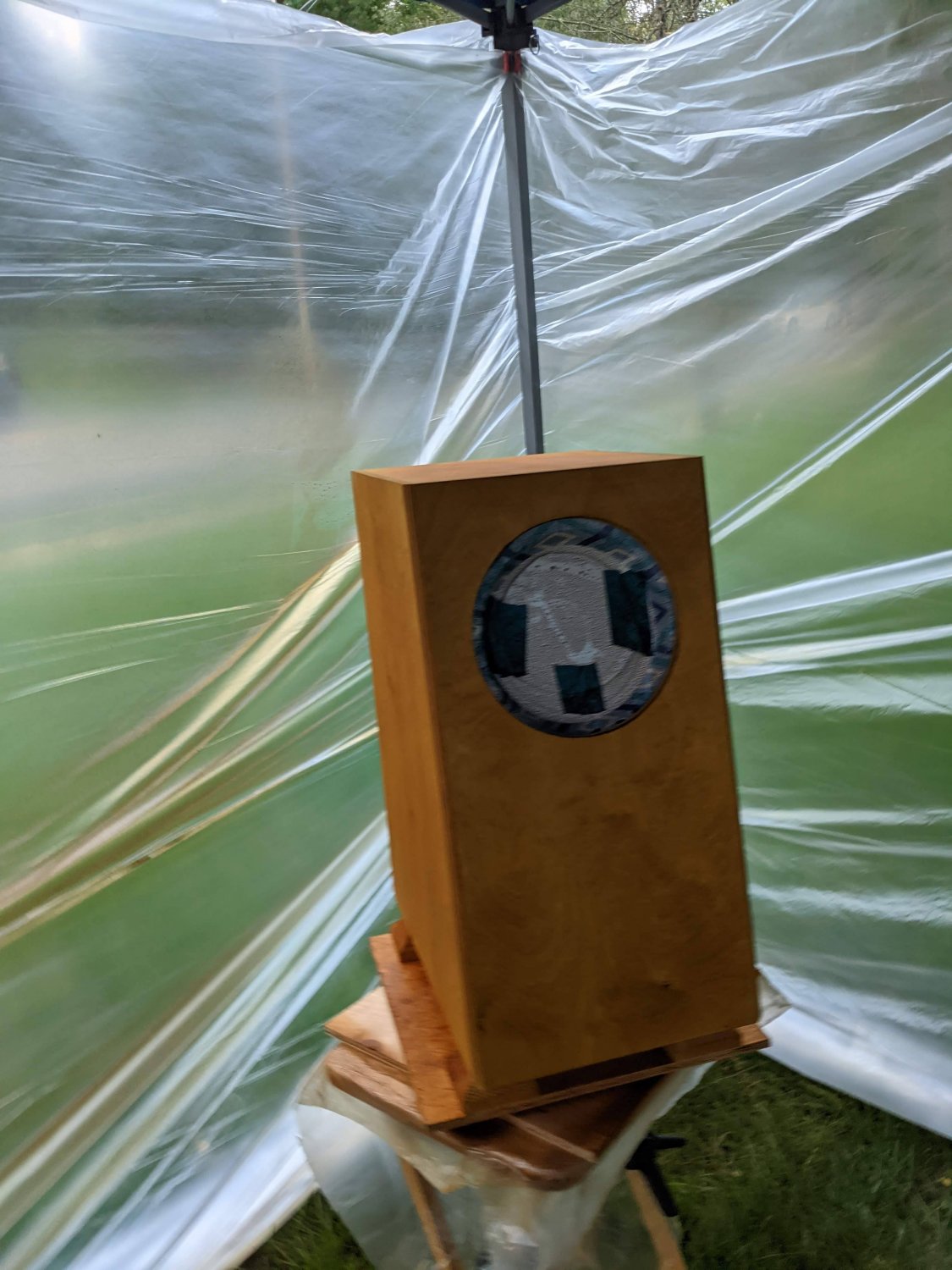 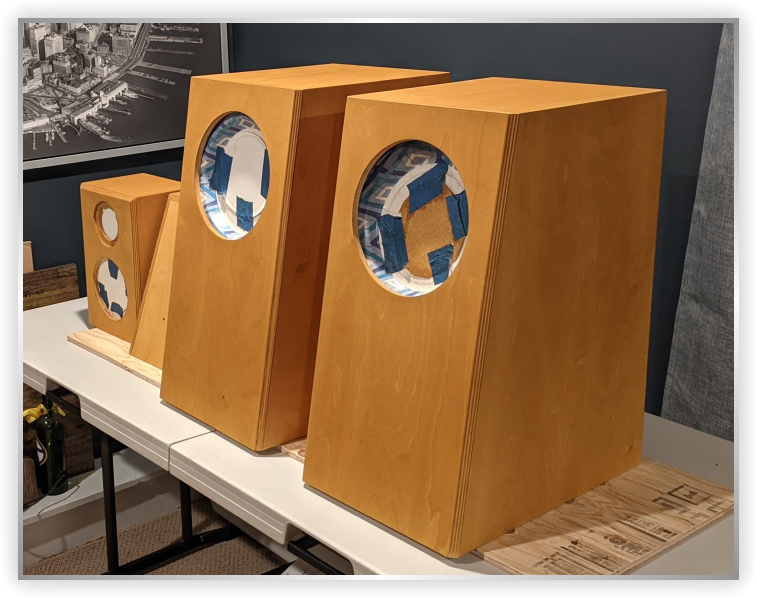 on to the sunburst.

grabbed a 2oz ceramcoat black acrylic paint from hobby lobby for like 2 bucks, watered it down 50/50, and ran it through the crappiest harbor freight airbrush they sell for like 10 bucks, and it worked awesome!!

however, what wasn't awesome was my technique, yikes! needless to say this was done on the backs of the speakers which were then later filled in to all black. i thought i could 'blend' it in directly, but it looked like crap 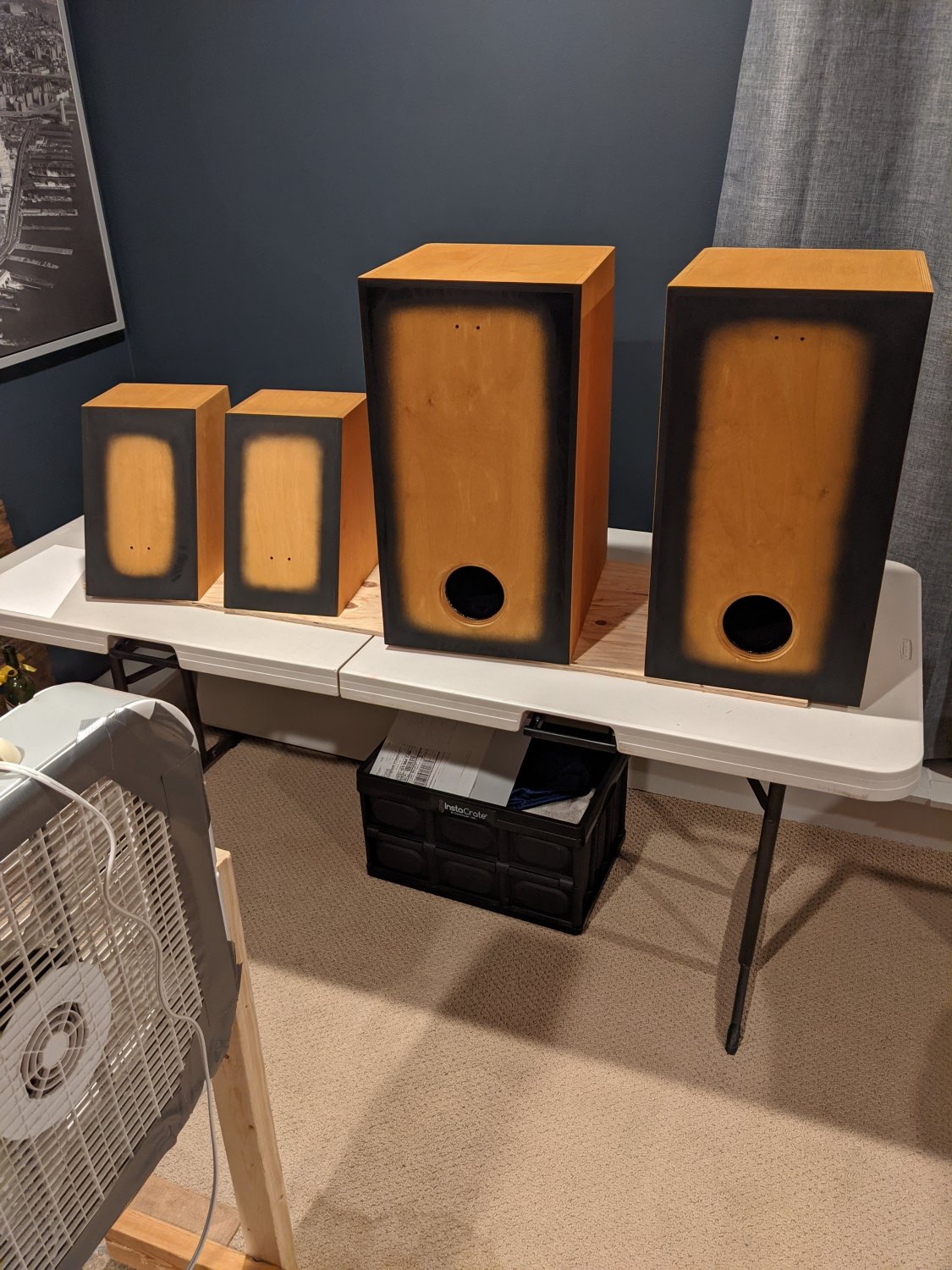 however, after some practice, i got the technique down, they key was to spray INWARD to the wood from the outside which gave the affect i wanted 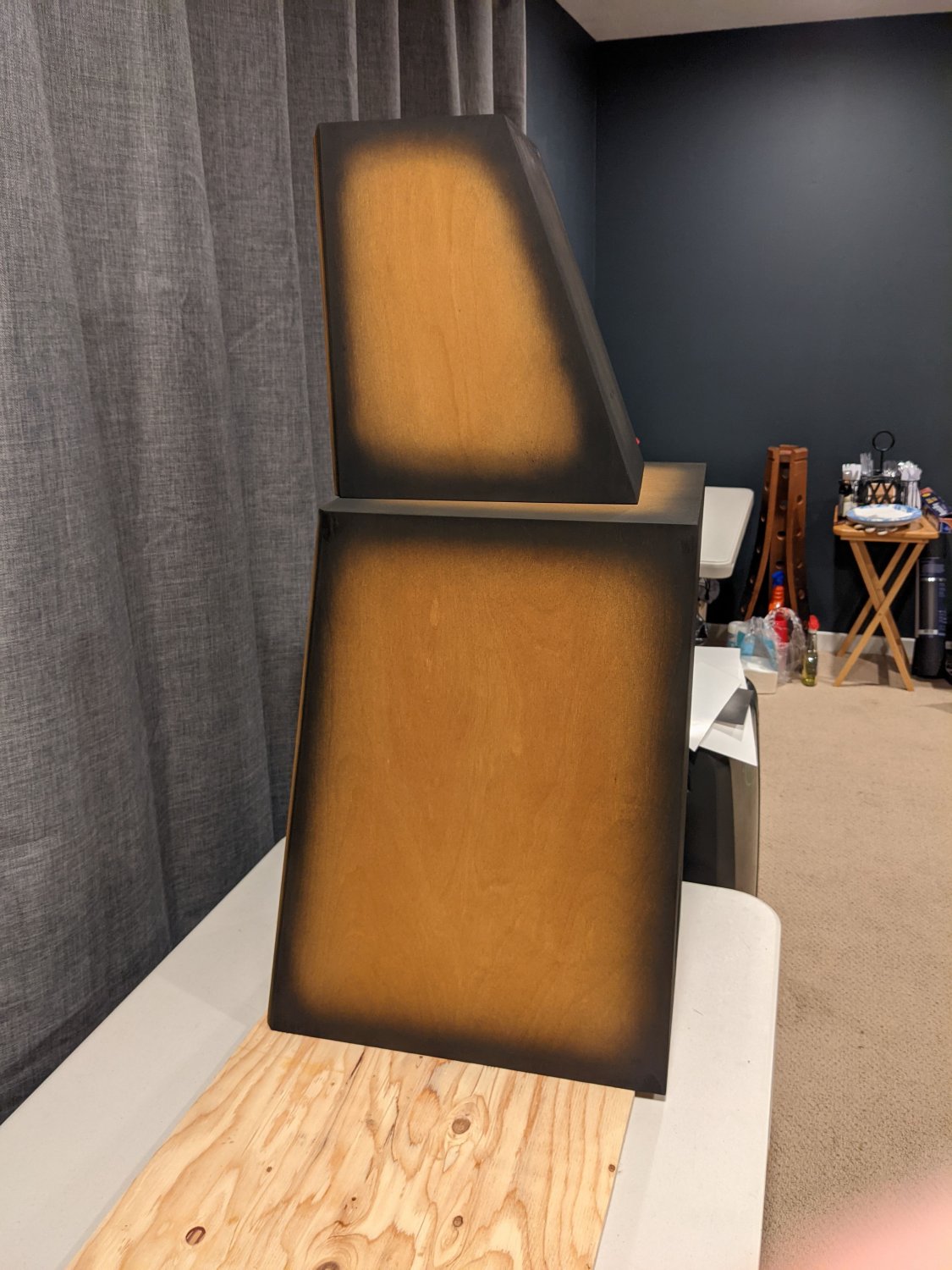 little plate trick. cut out the middles of the plate so your hand can go through them, tape to the back of the speaker hole. then, cut another plate to cover the hole 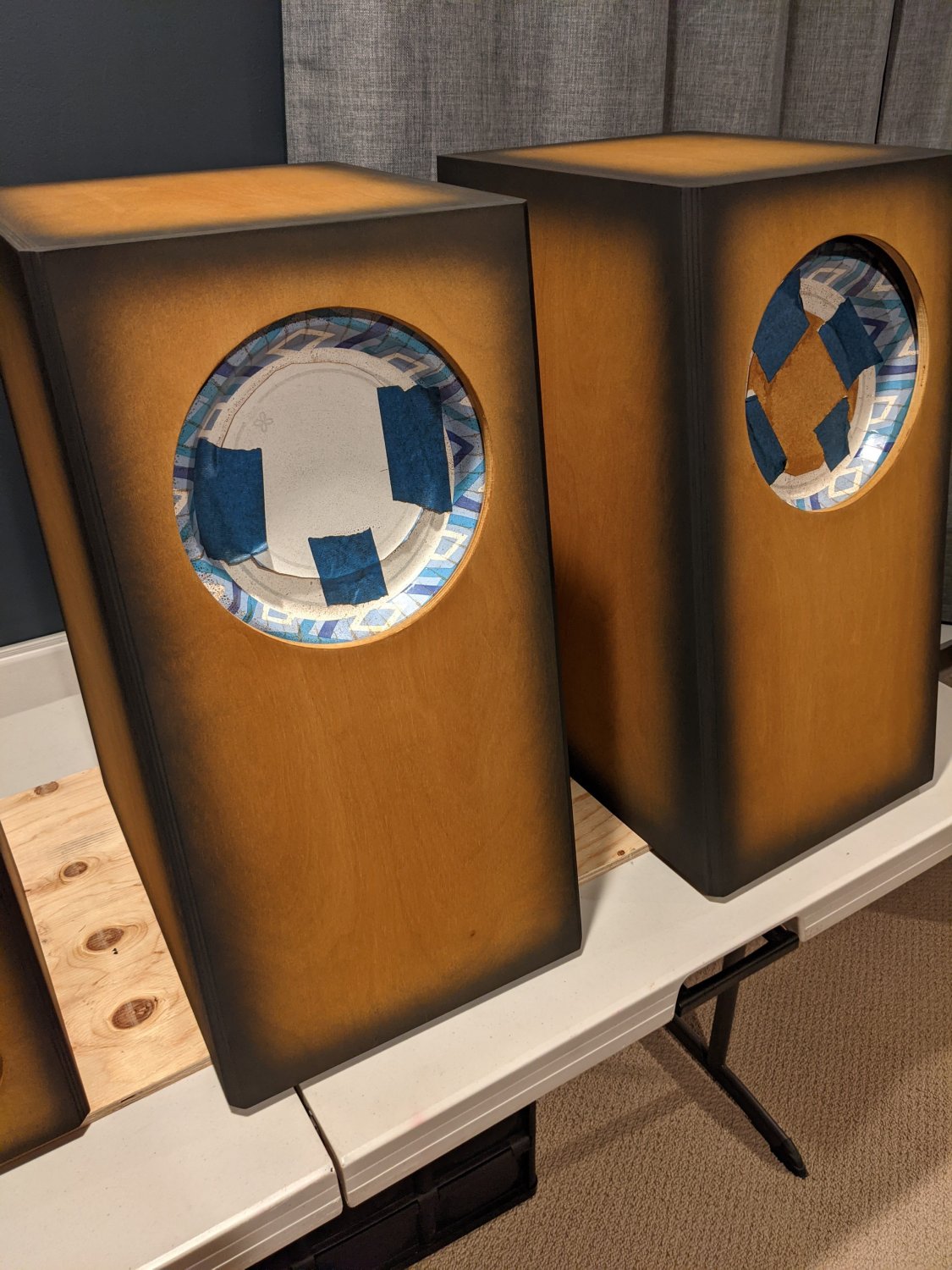 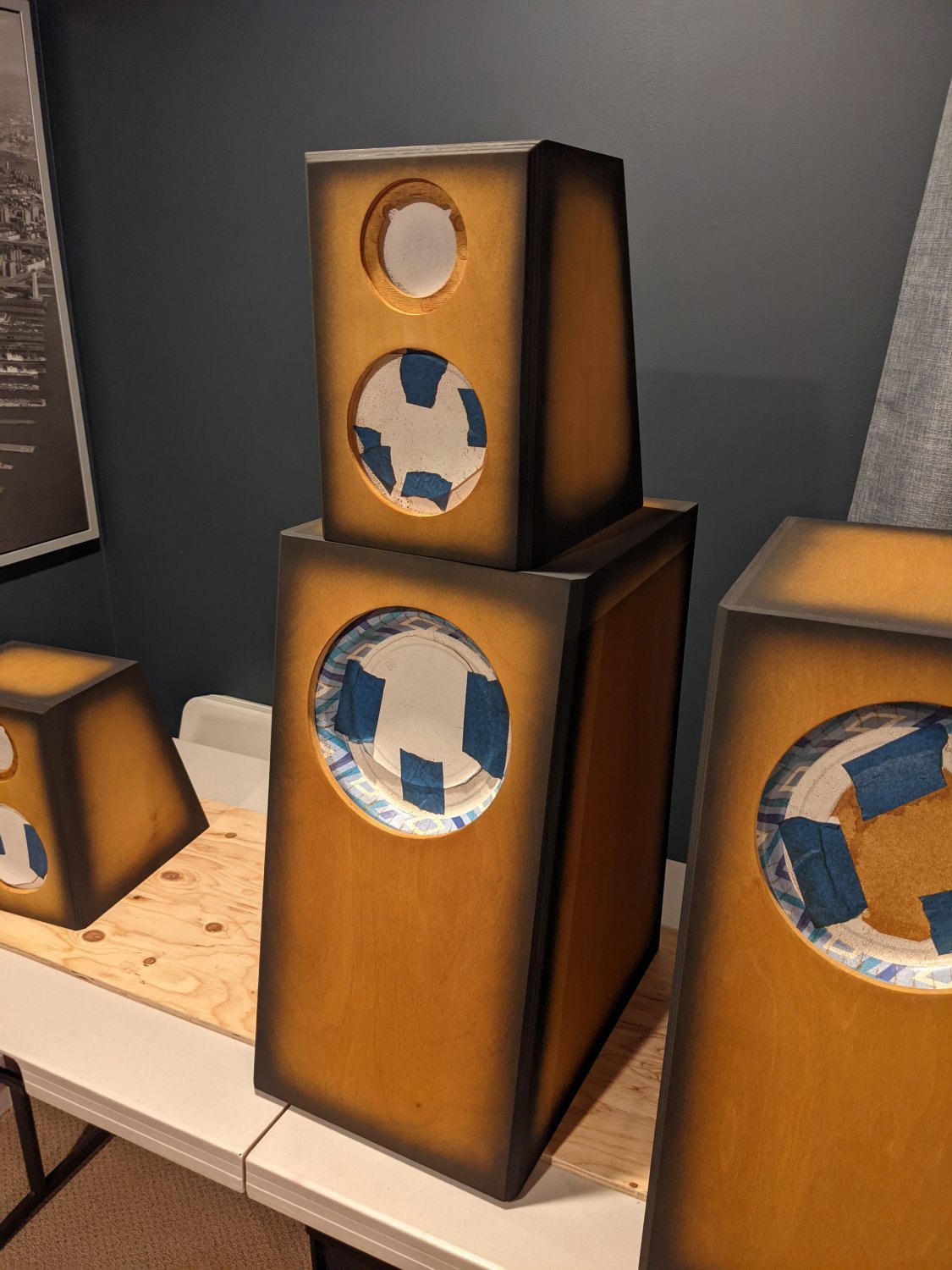 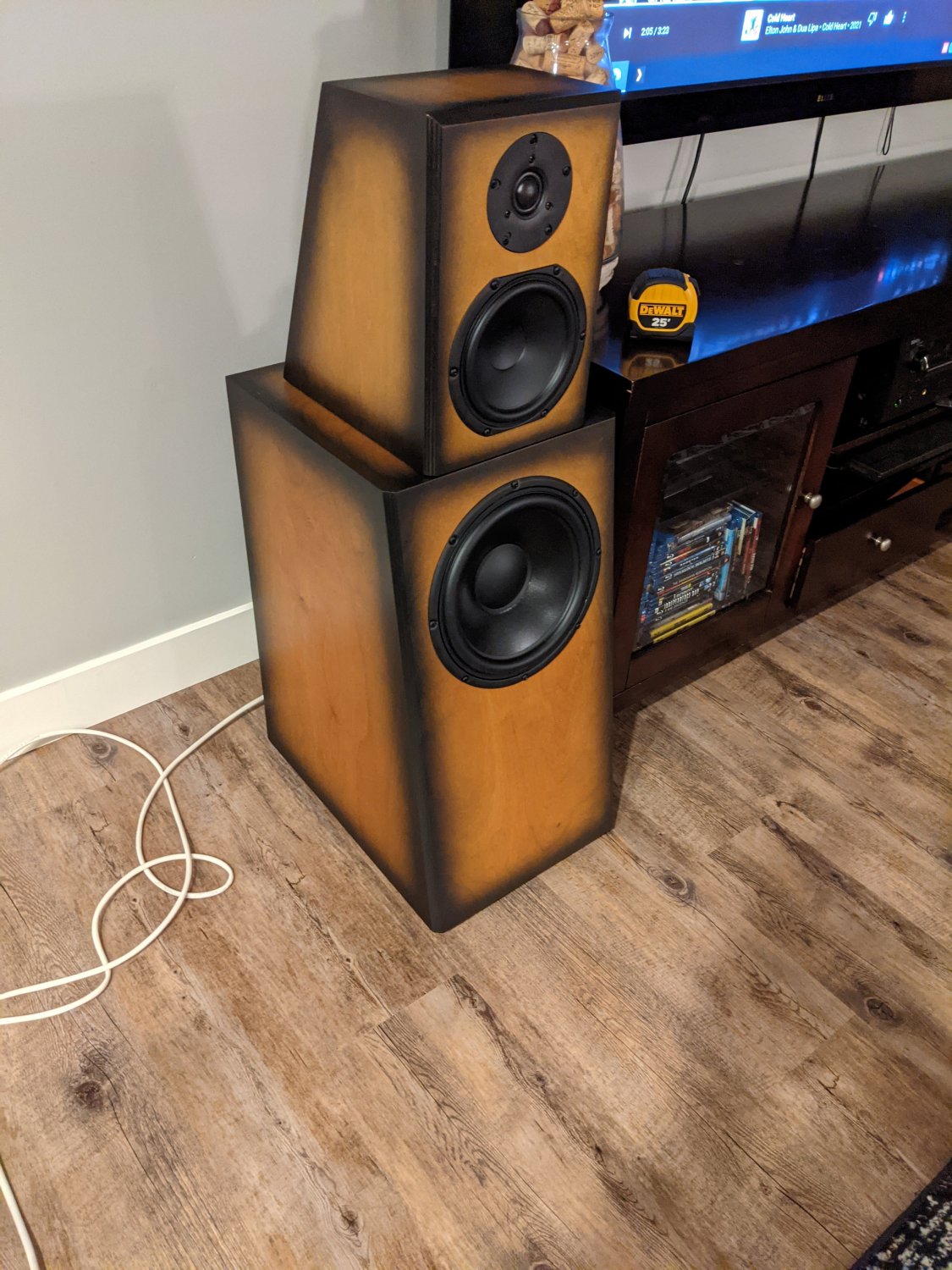 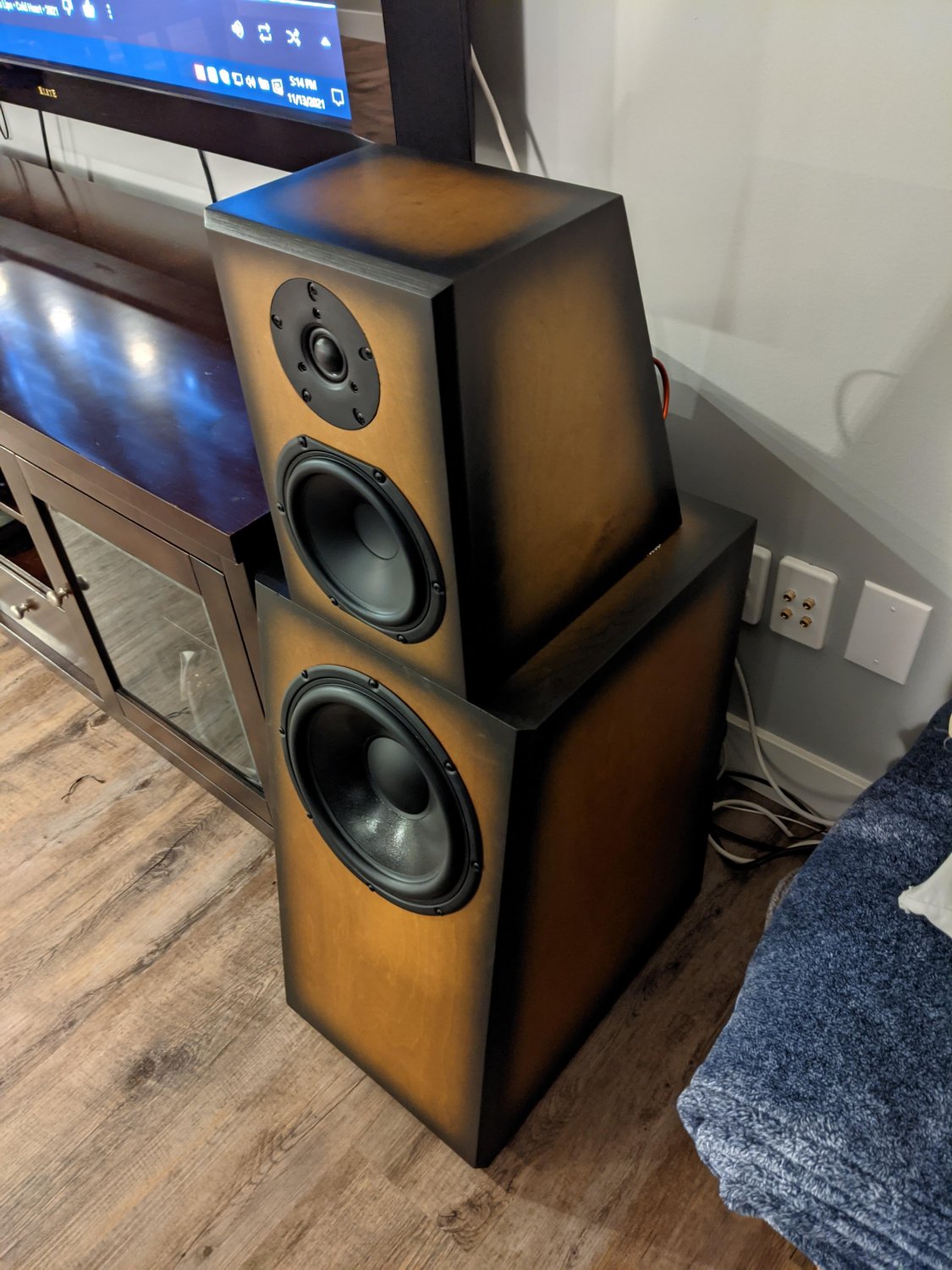 voila, they sound incredible, thanks to paul for his beautiful design, and bolland83 for his inspiration for the burst look 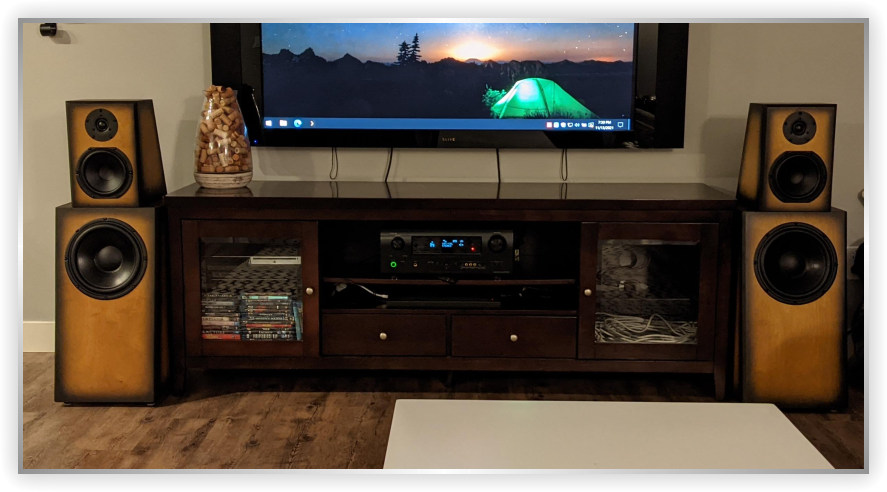 final thoughts: they really do sound utterly amazing, the imaging is unbelievable, the depth, everything is so clear. grinning from ear to ear

the AVR is going away, i have a Topping E30 (that i actually already hooked up to the AVR last night) and a DIY L20.5 amp

the amp blew on my first power up, and took out my power supply with it, so i'm in the process of doing a full rebuild of the L20.5 amp with true toshiba transistors, replacing all caps, and a few other resistors. should be done shortly

thanks all for having a look!

And there's me thinking you were going to build one of these. 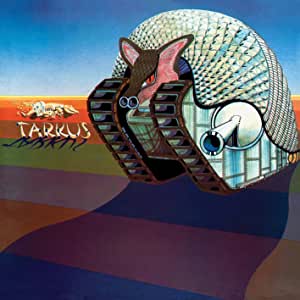 Nice finishing skills! I always thought that design was very well done. Carmody really got a lot of output capability at a low cost with that design.
Discussions about products that are not developed with objective methods, or the people who make them, are never productive. Let's celebrate artistry in music, technical excellence in reproduction and ignore the rest.
OP
D

sergeauckland said:
And there's me thinking you were going to build one of these.


617 said:
Nice finishing skills! I always thought that design was very well done. Carmody really got a lot of output capability at a low cost with that design.
Click to expand...

much appreciated, many thanks to lots of youtubers!

and yeah, carmody knocked it out of the park on this one, i think the BOM for just the speaker parts was a touch over 330
Last edited: Nov 17, 2021

sergeauckland said:
And there's me thinking you were going to build one of these.
Click to expand...

That's what got me here, it triggered a memory cell, I wanted to see if anyone had said anything. Thanks.
2022 CE

Looks nice, but I do wonder about directivity with such a large midrange crossing at 2 kHz to an almost waveguide-less tweeter. I particularly like the two box style, but prefered the colour before edge darkening, personally.
Suckless music player: https://git.sr.ht/~q3cpma/mus
A

These look awesome. I've always wanted to do a P.C. build.

How do they compare to the Fusion-8's?

datrumole said:
haha, it's on his page, i'd never heard of it!
Click to expand...

One of Emerson Lake & Palmer's best. I particularly like the Steven Wilson remix in multich. Was definitely what caught my eye! Nice work!
OP
D

AudioAaron said:
These look awesome. I've always wanted to do a P.C. build.

How do they compare to the Fusion-8's?
Click to expand...

the fusions are a different breed all together, i dont think a fair comparison due to the lack of bass

the fusions give you everything they've got, and then some; in the range they excel in. there is literally no topping them out. i have 250w available to throw at them, i'm sure i use about 50% of it, and they laugh at me. however, they simply do not have the depth the tarkus has, and for obvious reaons

for home theater, i just would never give up a high efficiency speaker and round out the bottom with big drivers, so to me, the fusion (and like designs) will always be in my HT. its funny, it never seems loud enough. i realized, it's distortion that causes that 'harshness' that loud feels like. when you have something that doesnt distort, loud doesn't 'hurt' if that makes sense

for a more pure 2ch, i really wanted something of a single source, i wanted the full range from a single speaker. i know there are plenty of schools of thought about having the bass separate so you can find the sweet spot in the room etc etc...but there just is something about two sources of sound, period, that gives off it's own sound. is it always in the best room placement, nope, but it has it's own distinct sound signature all in it's own right that my HT cannot replicate in the same way

so i think they are perfect for what they achieve, and by no means would i not consider the tarkus as an LR for a theater, i just haven't put them through the ringer just yet
J

Any FR measurement/results in your room? They deserve a purifi
OP
D

jae said:
Any FR measurement/results in your room? They deserve a purifi
Click to expand...

nothing yet, plan to get that done some time this weekend

i'd love a purifi, but plan on building another really well measured amp, the L20.5
OP
D

q3cpma said:
Looks nice, but I do wonder about directivity with such a large midrange crossing at 2 kHz to an almost waveguide-less tweeter. I particularly like the two box style, but prefered the colour before edge darkening, personally.
Click to expand...

you'd have to take up the design with paul carmody, a very well respected DIY speaker designer: https://sites.google.com/site/undefinition/floorstanding-speakers/tarkus

as for the aesthetics, fair enough, everyone likes what they like
OP
D

hey all, finally got around to doing some measurements

run off my denon in direct mode, so no EQ

look pretty consistent. both were measured in the same location in the room at 1m (var smoothing)

here is them in the normal locations at MLP, again no EQ, using MMM at about ~4m (13.5ft) (var smoothing)

note the massive drop off of the tweeter, i guess at that distance it runs out of steam quick?

here are the left speakers overlaid from 1m and 4m to illustrate the tweeter fall off, bumped up the dB offset to illustrate a bit better

i'm an idiot, spent the last two days pulling my hair out with this tweeter dip, no matter of EQ could get rid of it

then it dawned on me, the dac has some filters...grrr, sure enough, i was on 'slow roll off', went to sharp and voila...back to normal

some updated plots. still a drop in the high frequencies in MLP, but i can assume that to be expected over the distance

1m, no idea how to read phase stuff yet

4m MLP, MMM RTA measurement, overlaid the 1m. looks to be about a 3db variation 11/12kish 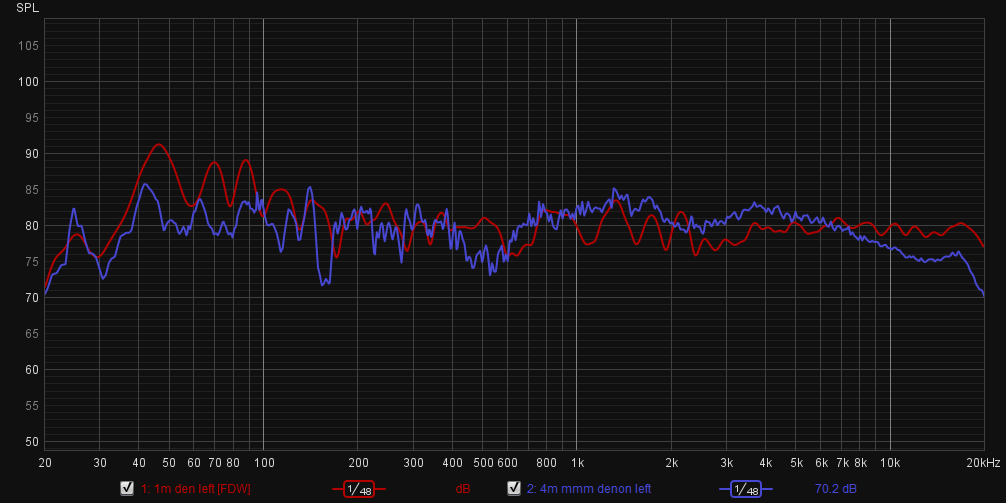 P
Making use of some old cabinets (DIY build)