The Tri-Band Wireless Audio Adapter is the newest Wireless transmitter from SVS, for those who would like to place their subwoofers (or Speakers) in the optimal location in their room but do not want to extend long meters of cables. It's 200$ USD per Transmitter and Reciever but SVS support has disclosed with me that they've started to sell them individually as well.

The previous iteration, the Soundpath Wireless Audio Adapter was quite successful and measured decently by Amir here. However, according to other users, it's not great in areas with HEAVY interference, which was also disclosed by SVS as well.

I live in an apartment in a gigantic building with possibly tens of thousands of devices using WiFi, so i was very hesitant to use such products. However, with the release of the Tri-Band version I felt much more confident and I took the plunge!

Once installed, it auto-switches between the 2.4 GHz, 5.2 GHz, and 5.8 GHz wireless bands for uninterrupted audio signal transfer. (Allegedly) Impervious to interference from Bluetooth, Wi-Fi routers, wireless security systems, cameras, and other wireless devices.

However there is no Free luncheon, this device introduces ~19.25 ms of delay (advertised and confirmed by measurements), compared to the 14ms of delay for the previous iteration.

What's in the Box? 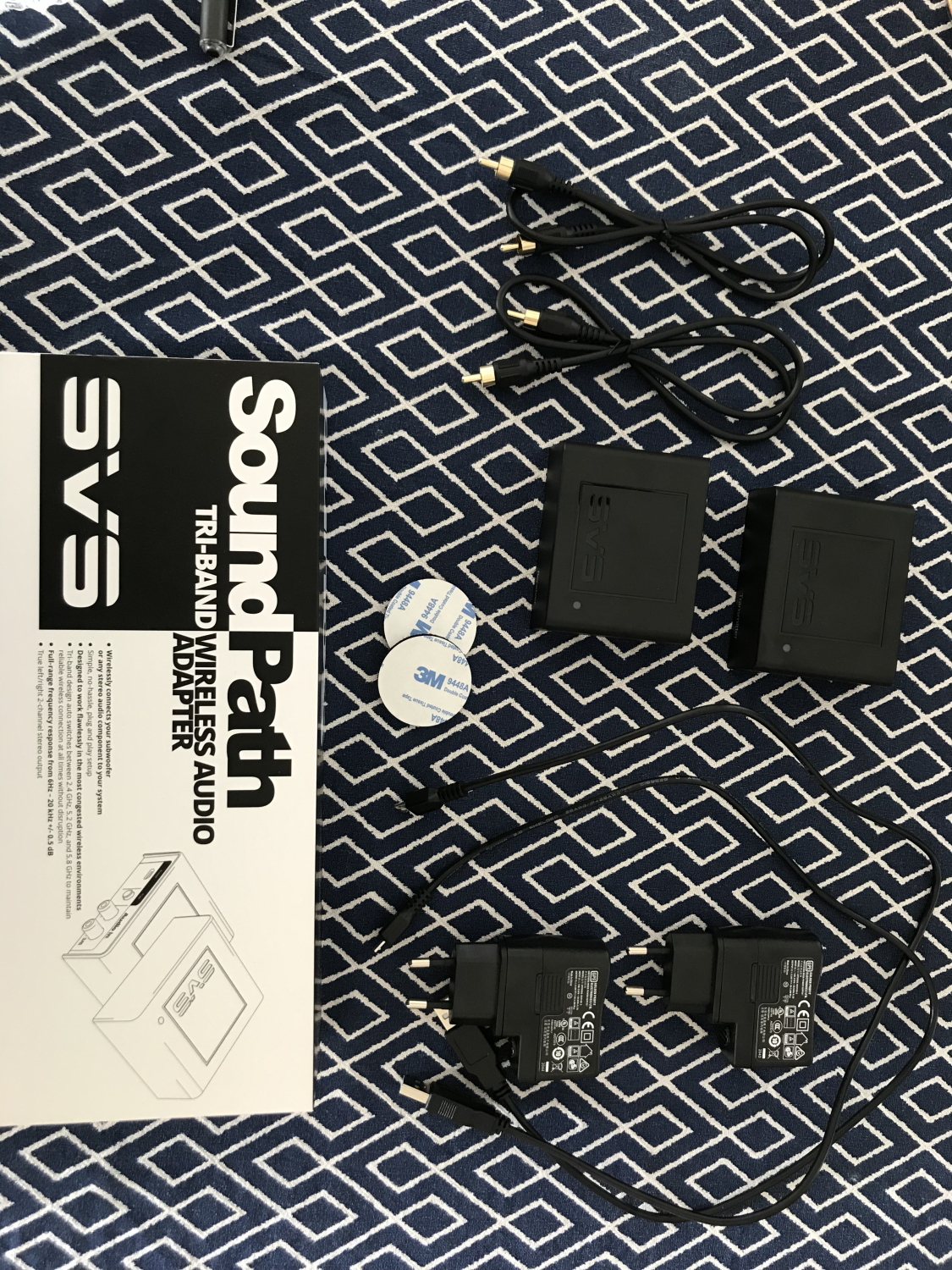 One transmitter and one receiver

It's pretty much plug and play as the transmitter and the receiver are paired before they're delivered to you, as soon as the two devices are powered the link is established.

To measure the performance I used equipment (DAC and ADC) that I own and has been measured on by Amir for reference, this is not perfect, but i have enough resolution to clear out the entire CD format (~96dB SINAD), the MiniDSP was also used to voltage/volume match the two inputs. 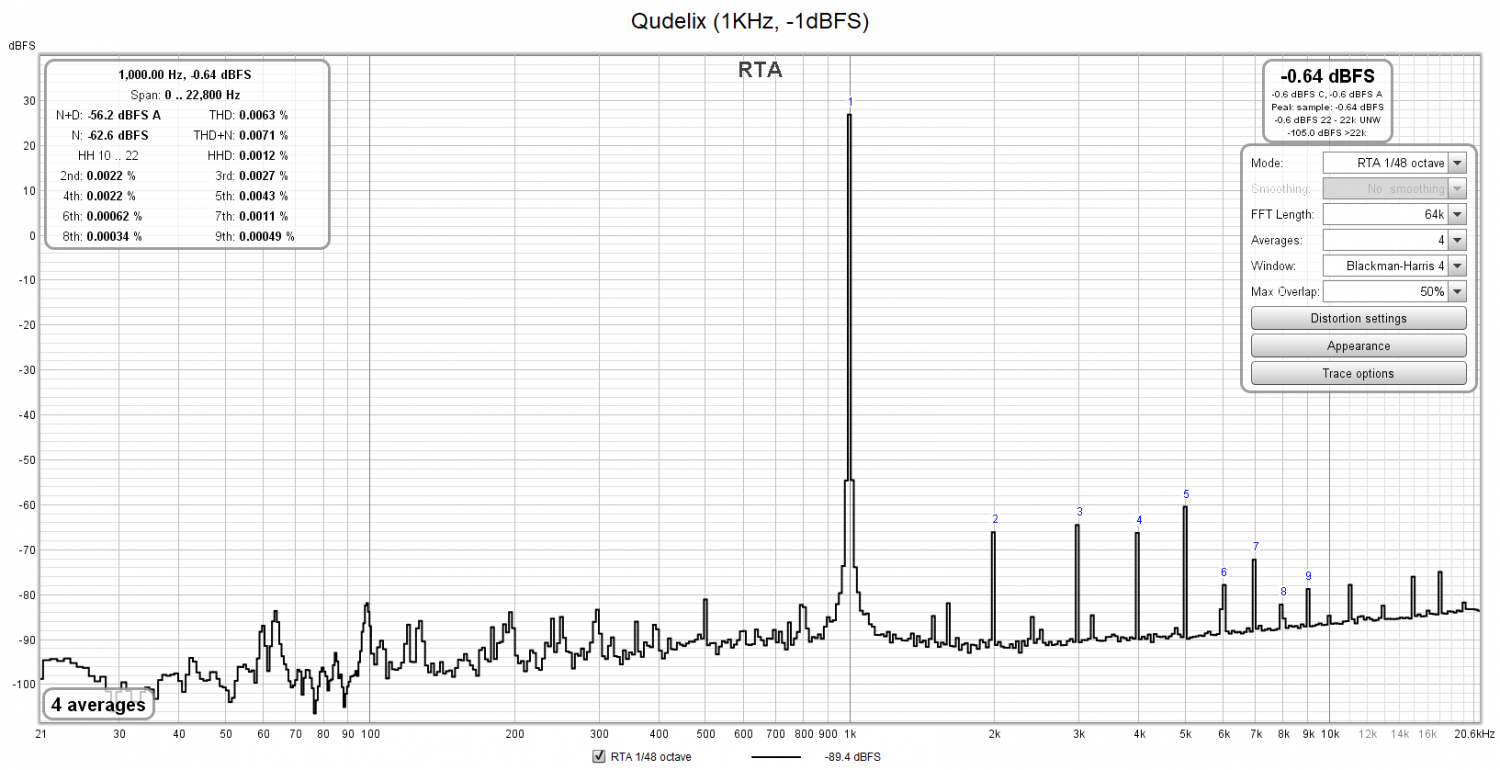 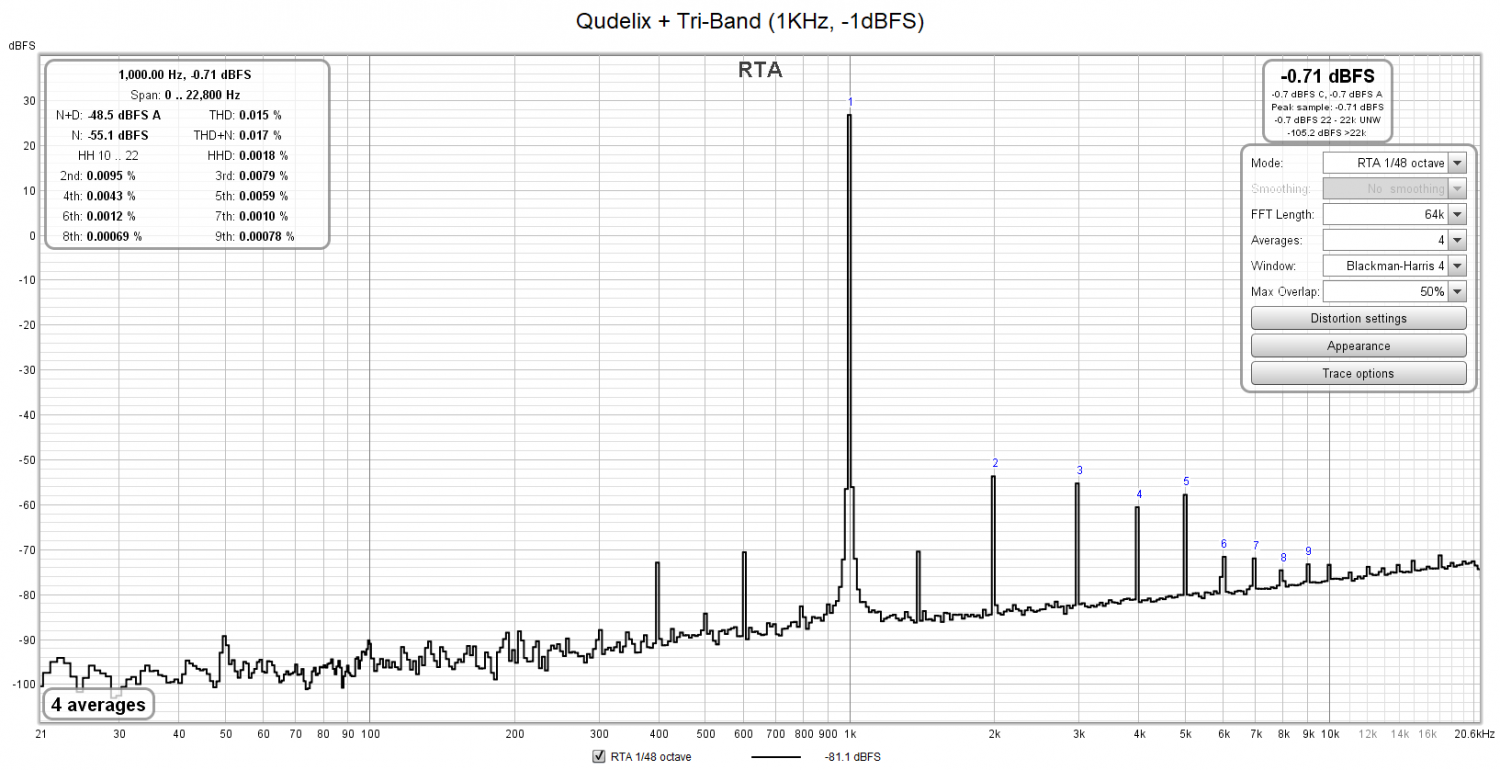 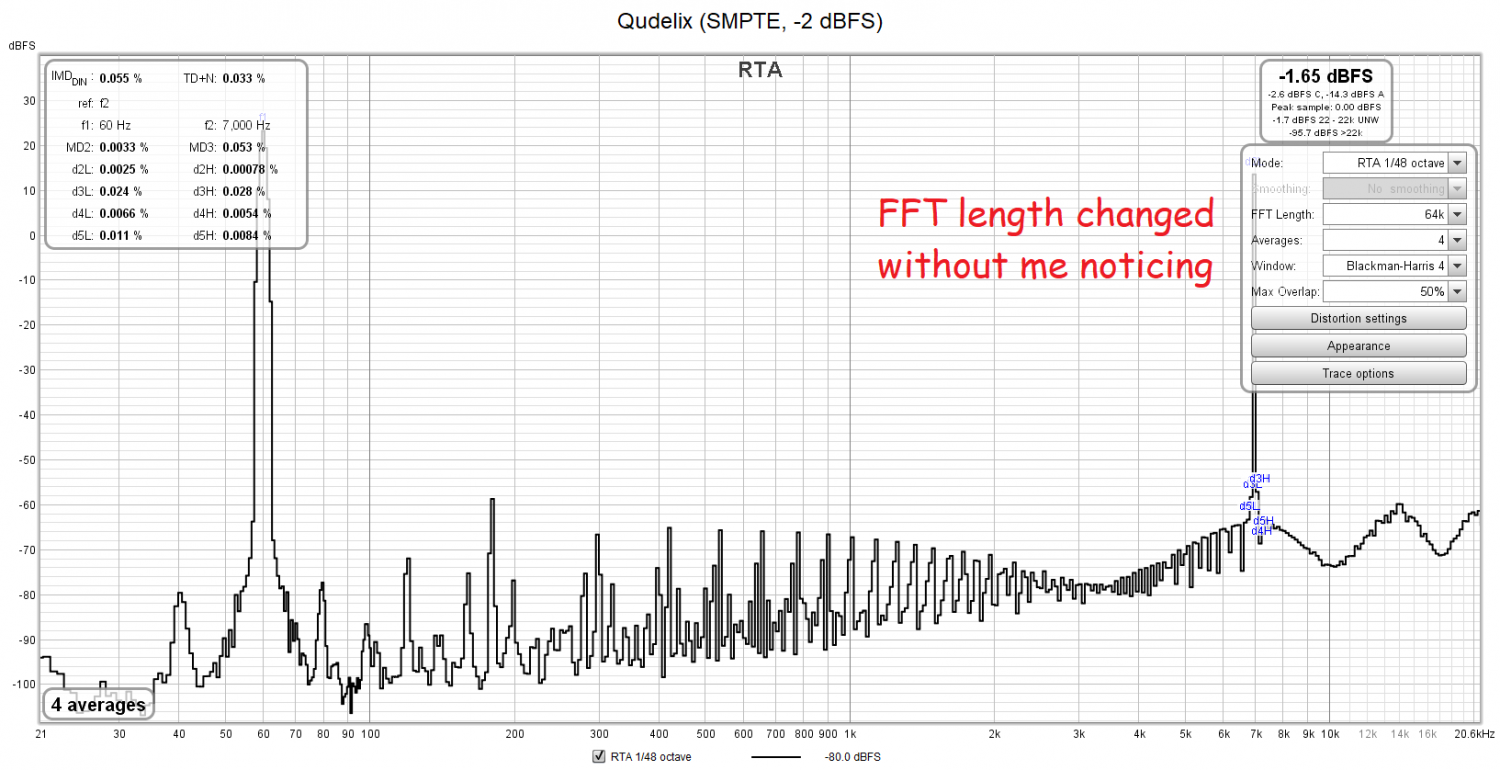 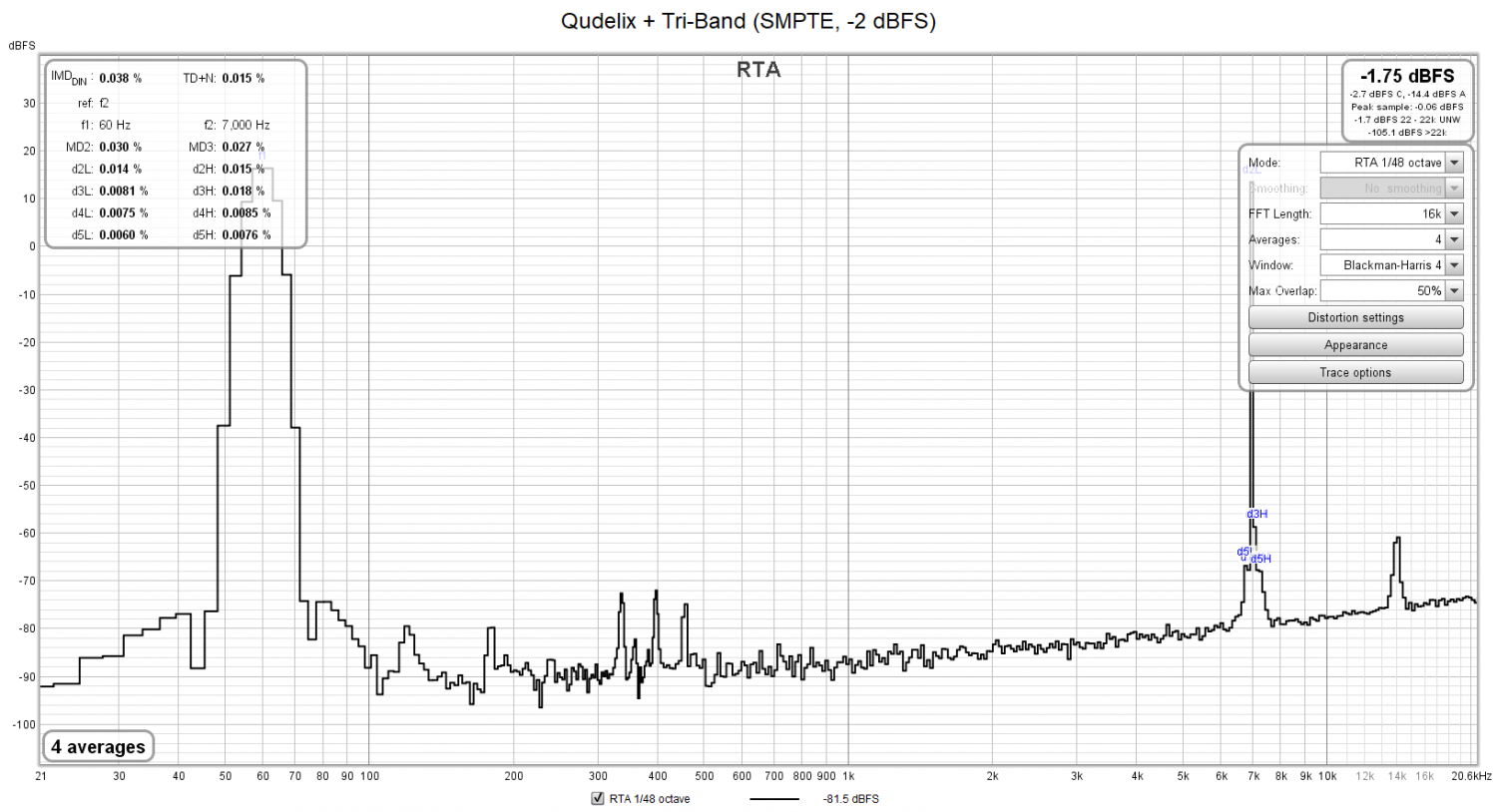 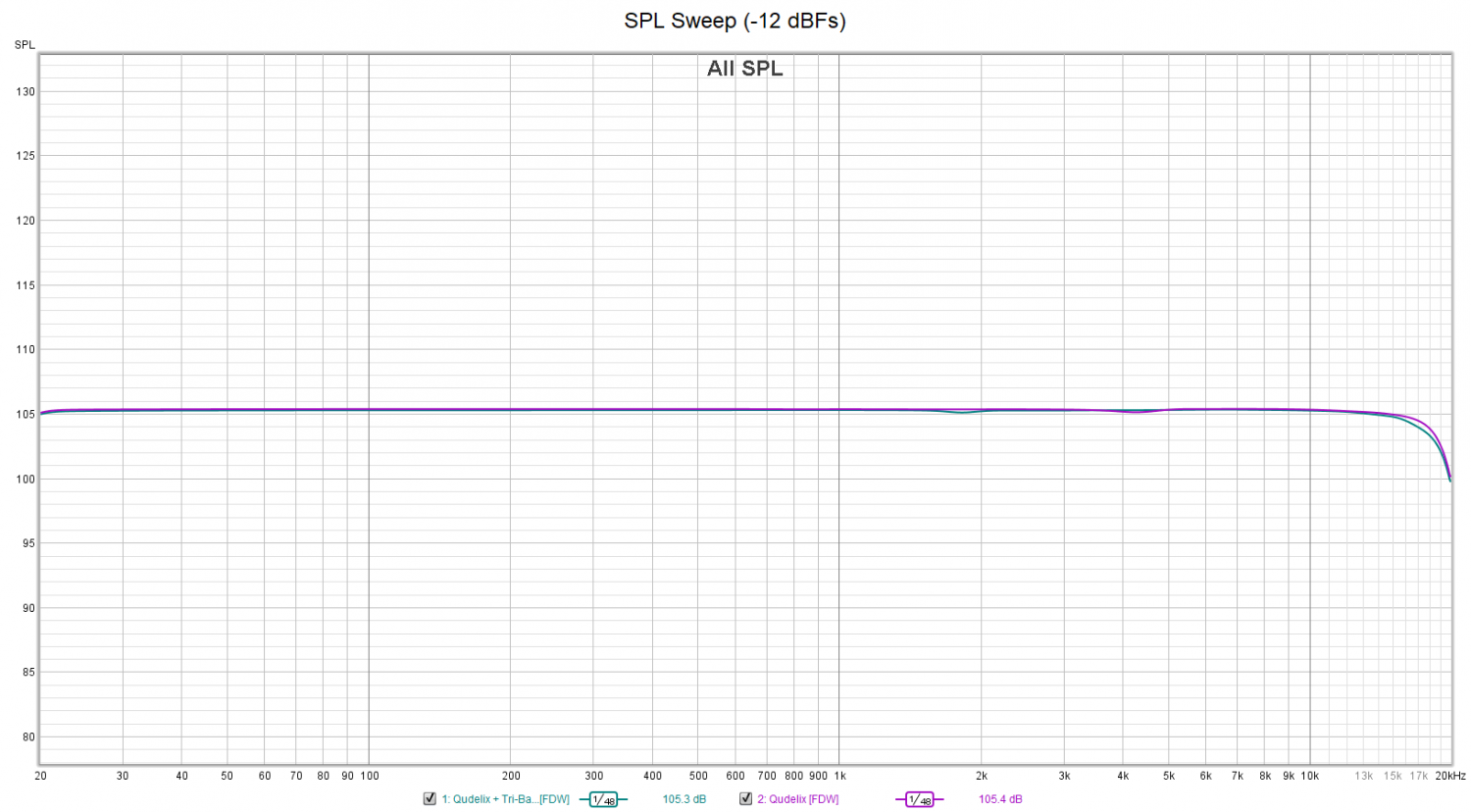 True. I measured the latency by using the 'Tri-Band free output as the Reference output and selecting 'loopback as acoustic timing reference' in REW 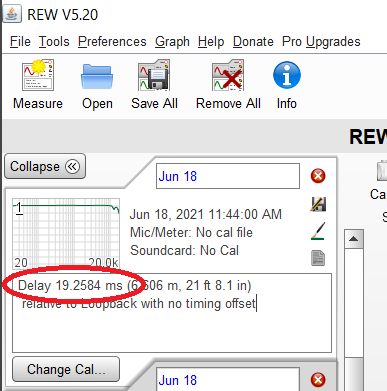 True. I wouldn't lose sleep over the tiny difference in high frequency roll-off in the SPL sweep.

True. I'm infact getting 75 dB SINAD which is utterly and completely transparent for subwoofer use.

Probably. I'm limited by the MiniDSP in that regard, but it shows ~6 dB higher noise than the Qudelix on its own. Which checks out. You're free to interpret this however you want.

Claim #5: The Tri-Band is quite impervious to Wifi interference

True. Playback has been fairly smooth and uninterrupted (even at full bandwidth), my subwoofers are not turning on in the middle night and causing mini explosotions. Considering that my apartement is wifi hell, that's pretty good.

Seems like a quite well engineered product, I would recommend it to anyone struggling with subwoofer placement because they don't want to extend cables, even in very dense apartment complexes and intense Wifi interference.
Last edited: Jun 18, 2021

Thanks for measuring this.
It seems quite expensive for what it does, even if it does it quite well.

It would be interesting to find out how it compares to the dual band Dynasty WSA-5TR-V2 with a claimed latency of <17ms, goes for less than half the price and according to Dynasty Proaudio has the same internals as the KEF KW1.
I have yet to see any problem, however complicated, which, when you looked at it in the right way, did not become still more complicated.
OP
A

Zoomer said:
Thanks for measuring this.
It seems quite expensive for what it does, even if it does it quite well.
Click to expand...

this is a more expensive option for people experiencing wifi interference.

the less expensive model is 120$ I think.

I have a pair of these tri-band links too, and ran them through my QA402. These were done with a 256k FFT, 96 kHz sample rate, Hann window, and 4 averages. I found the best loopback SNR at a -6 dbV output and "6" full scale input.

Summary: My measurements agree with @abdo123 except for SNR. Maybe that's pilot error on my side? I'm still pretty new working with the QA402. 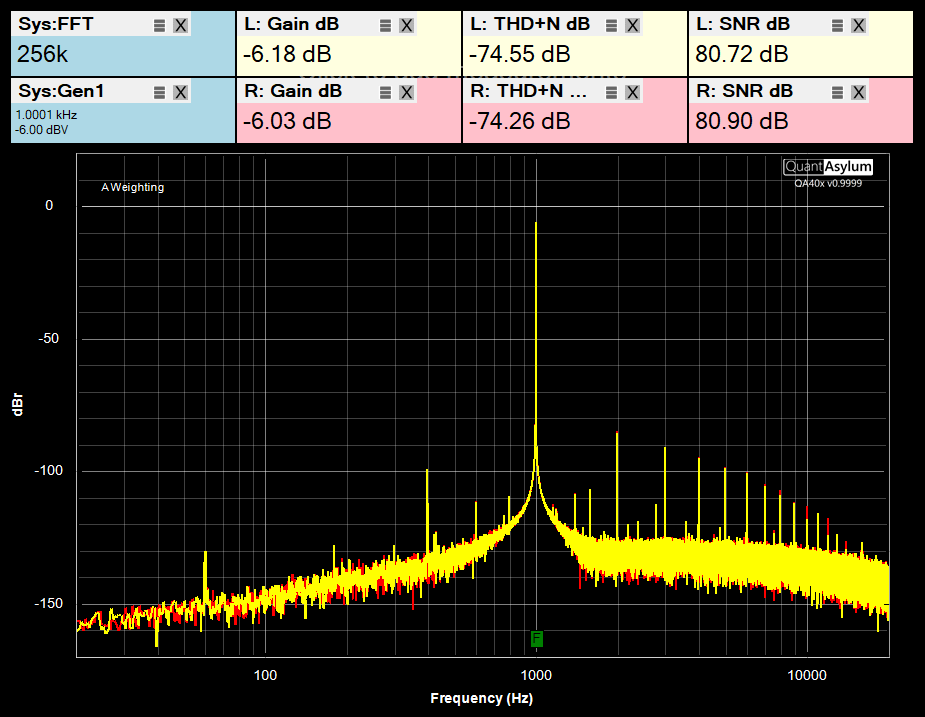 Here the right channel is in loopback so you can see the DUT vs signal. So my max SNR sensitivity is about 99 dB, but the device is a good 20 dB under that. 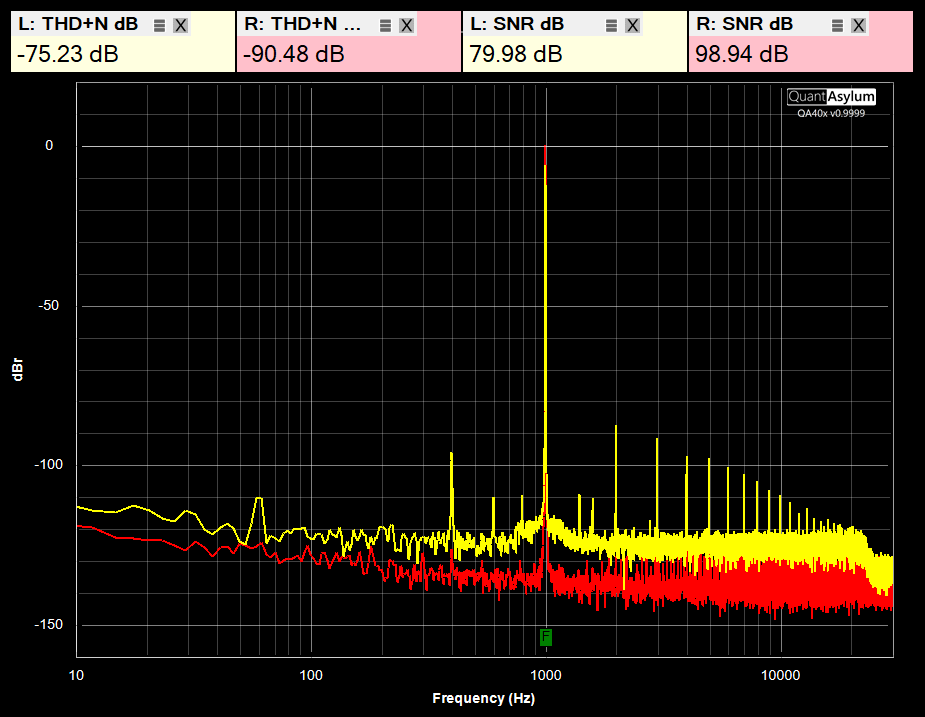 The frequency response looks very good 10 Hz to 20 kHz. It does fall like a rock after 20 kHz. 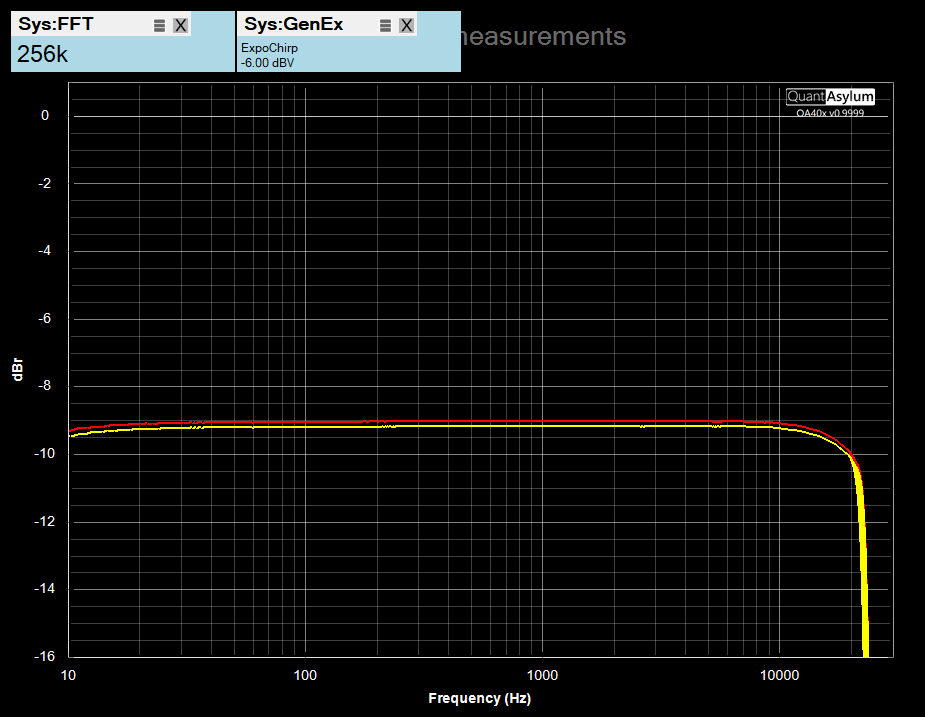 Finally, for delay I used the left channel DUT and right channel loopback, then set the cursors on the same peak. The "DX" measurement is 19.25 msec. 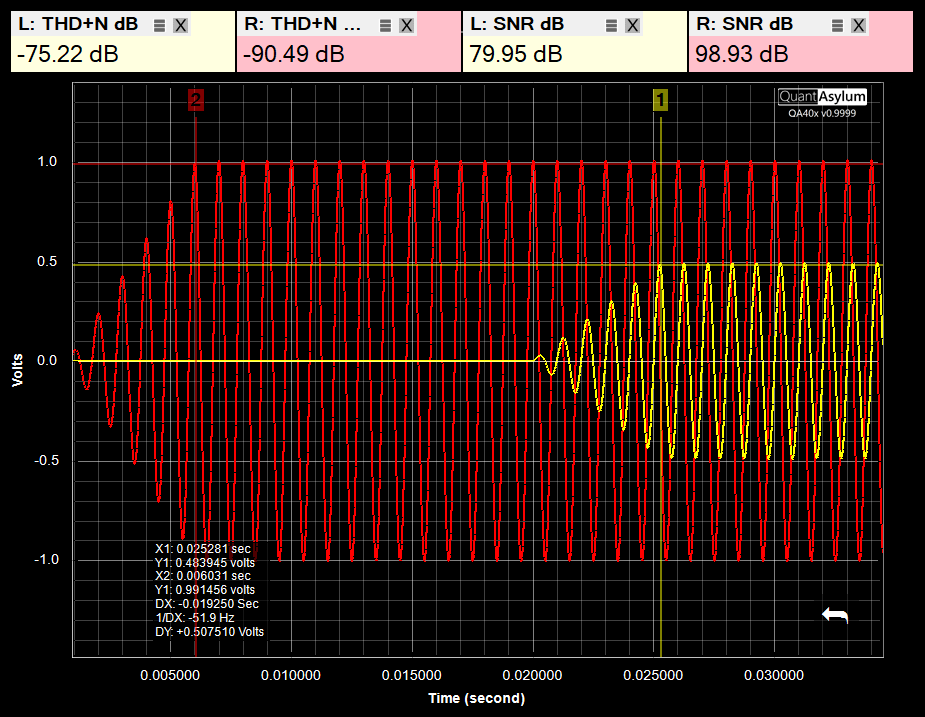