Willem said:
I am using a single B&W PV1d subwoofer (main speakers are Quad 2805 electrostats driven by a refurbished 2x140 watt Quad 606-2).audacity temp mail origin My original impression was one of disappointment as the sound was overripe and woolly, not to say boomy. Reducing the crossover frequency and subwoofer level both helped, but only if done to such and extent that there was little point in having the subwoofer at all. So I started reading and began to surmise that I was suffering from room modes, and perhaps all the more audibly because as dipoles the electrostats elicit far fewer room modes. My solution was to get a DSpeaker Antimode 8033 dsp room eq unit for the subwoofer. The result was quite amazing, with now virtually perfect integration with the ultra clean Quads. Next step will be a second PV1d, for even cleaner/tighter/faster bass. I am sure the difference will be very audible, and over a wider area. I recently did do an REW measurement and it was clear that there is still quite bit of room for improvement beyond what the Antimode 8033 can achieve. The extra sub will also give another 400 watts of amplifier power, and in the frequency range where I probably neeed it most.
Click to expand...

fsos said:
Is it kosher to use an RCA splitter?
Click to expand...

Yes, no prob - the source impedance is typically two orders of magnitude lower than the load impedance, so no issue.
"To try to judge the real from the false will always be hard. In this fast-growing art of 'high fidelity' the quackery will bear a solid gilt edge that will fool many people" - Paul W Klipsch, 1953
W

DSpeaker recommend a Y cable for the Antimode Cinema that I have. See the online manual.

Willem said:
DSpeaker recommend a Y cable for the Antimode Cinema that I have. See the online manual.
Click to expand...

Yes. A RCA splitter and an Y cable are the same thing from an electrical point of view.
"To try to judge the real from the false will always be hard. In this fast-growing art of 'high fidelity' the quackery will bear a solid gilt edge that will fool many people" - Paul W Klipsch, 1953

The problem I had when doing my research is that many articles these days are concerned with multi-sub setups as most people have given up on single subwoofer use. Also 5.1 and 7.1 H.T. articles are of little use to a 2-channel listener in my opinion, it's not 2.1 after all.

I strongly agree with the quote you made far above, I've tried corner and off center locations with no luck.

What convinced me on getting away from room boundaries and other topics was this Dennis Foley video:

This article by Barry Ober............... almost everything you ever wanted to know about subwoofers

And a reoccurring diagram (because I'm a visual person).

So here I am enjoying the fruits of my labor. 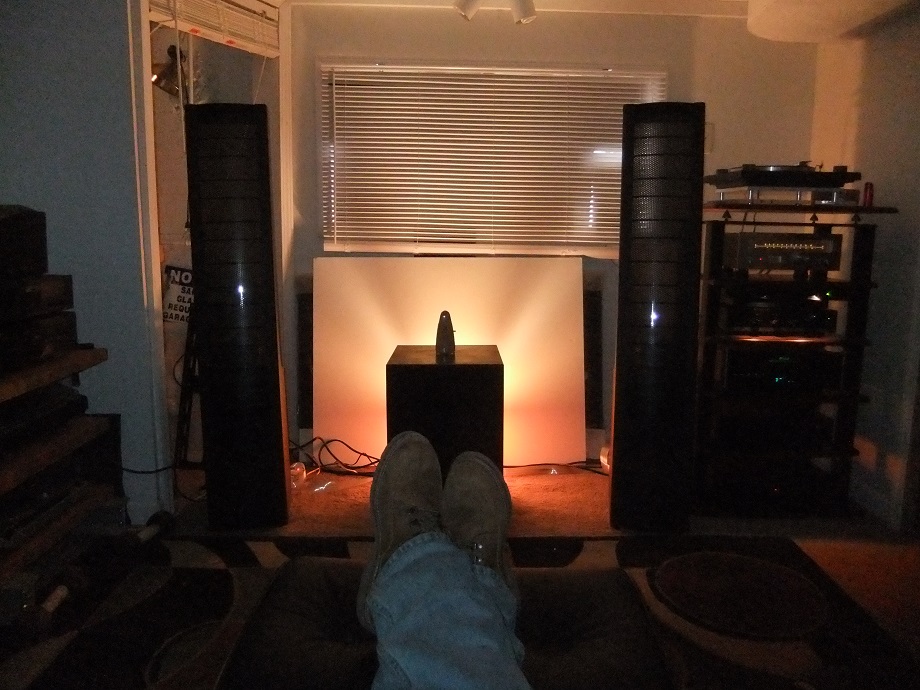 Sub is connected via low level IC's (inverted) from second set of outputs on the preamplifier.

NOTE-1: I do not claim this setup slays any possible room mode issues, only that from a single seating position they are not an item of concern.

NOTE-2: The listening position is NOT nearfield, it is proportional for this small room, however it is nearfield for the subwoofer as I'm in the pressure zone of long wavelengths. It's working, that's all I know.

NOTE-3: Please read the Barry Ober paper (warning, it's long), is he right about the analyzers and charts many depend on? How would you know when your bass is 360 degrees out of phase?
Last edited: Mar 16, 2020

amirm said:
It is from the original AES paper by Welti that started it all: http://www.aes.org/e-lib/browse.cfm?elib=11355
How Many Subwoofers are Enough
Todd Welti
Harman International Industries, Inc.
Click to expand...

Yep, let's put this in context, it's a different problem to solve for a single sweet-spot.

From an intuitive standpoint, putting a large number of subwoofers at different locations in a room might seem likely to excite room modes in a more 'balanced' manner, as compared to a single subwoofer. This idea has particular appeal where there is not a single listening location, but rather a listening area
Click to expand...

I see many nice curves - below around 120hz. But how do we blend them sweetly with the mains, so that we do not get a rather big suck-out?
I try to do what Geddes describe, which is to let the mains run down as far as possible, creating a low-order downward slope and then cross the subwoofers above this slope. An example could be F3 at 60-70hz on the mains and subwoofers crossed between 90-110hz - depending on what fits the best in a given situation.
This should add 2 more sources of bass in the critical region around 40-110hz and also let them blend better - leaving only bumps to dampen, since suck-outs are something to avoid.
I found that getting the mains to blend well with the subs - really helps improving the overall sound. How do you do it?

[Note: This article was published in the May/June 2012 issue of Widescreen Review Magazine]

Do you remember the scene in the movie Stargate where Daniel Jackson decodes the symbols that allow them to open the Stargate to travel to distant galaxies? And how once the gate opens, it generates such realistic reverberations that the coffee cup falls off the table next to the scientist with a pencil in his mouth? That is what this article is about. How to get superb bass performance in your home theater/music listening room and the science that unlocks it.
Click to expand...

It vibrates the THX cinema. 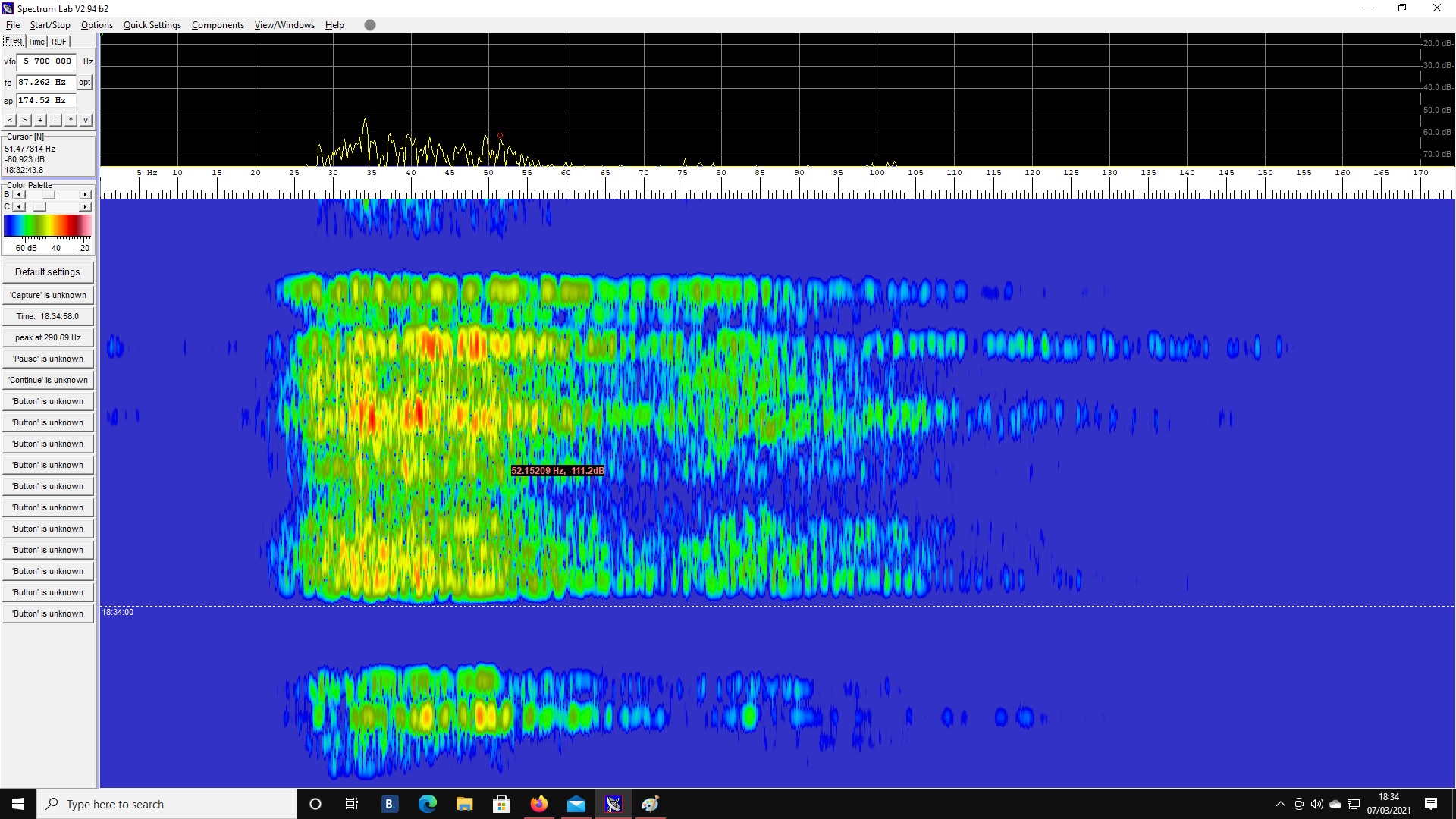 What you see in the film, is make-believe actors that are acting to no bass sound no vibrations all that we see is stuff filmed and then film edited then sound designers editors coming up with new sound effects, and then mixers mixing blending it all-together for a final mix. The lows ain't gonna shake the home would take lots, lots of subs so it is just wasted power. A real earthquake would unleash tremendous tactile energy that would damage the home depending the magnitude and time duration of the Quake that is felt for miles. Not even Earthquake in 70mm six-track Sensurround I doubt did damage to the local ABC screen 1, Bournemouth in late Dec 1974 though to almost mid 1975 the months that it played for, you'd think it would damage the walls and ceiling..


Maybe a sub/s that has the back of the box open and attached to the wall and then sealed all around so the bass wave can also travel directly into the wall and only way find out play a sine wave to see if it does some vibration and checking the watts or volts on the multi-meter to see how much is being used and checking that the sub attach to the wall isn't producing any resonate rattle buzzing noises which is gonna be hard to achieve as the buzzing rattle sounds wouldn't be part of the soundtrack those sort of noises are placed on the soundtrack of the LCRS to give us the liaison that it is.

Some bass waves can get trapped in corners and builds up it doubles in dB and why not use that with some sort something made to push that bass wave aimed towards the seating. Oh yeah bass shakers can be used and can use less power than the sub and the bass shakers vibrate and again the bass shaker should produce any resonate buzzing rattling noises other than producing the soundtrack vibration.

stargate dtshdma the LFE.1 has been unnecessarily boasted +10dB this is why I can't stand bluray 4k format they fake the levels by boasting it near field mixes. Also the rubbish bluray has missing sound where it fades from the past scene to present day, makes bluray unwatchable so got go with Theatrical Laserdisc AC-3. 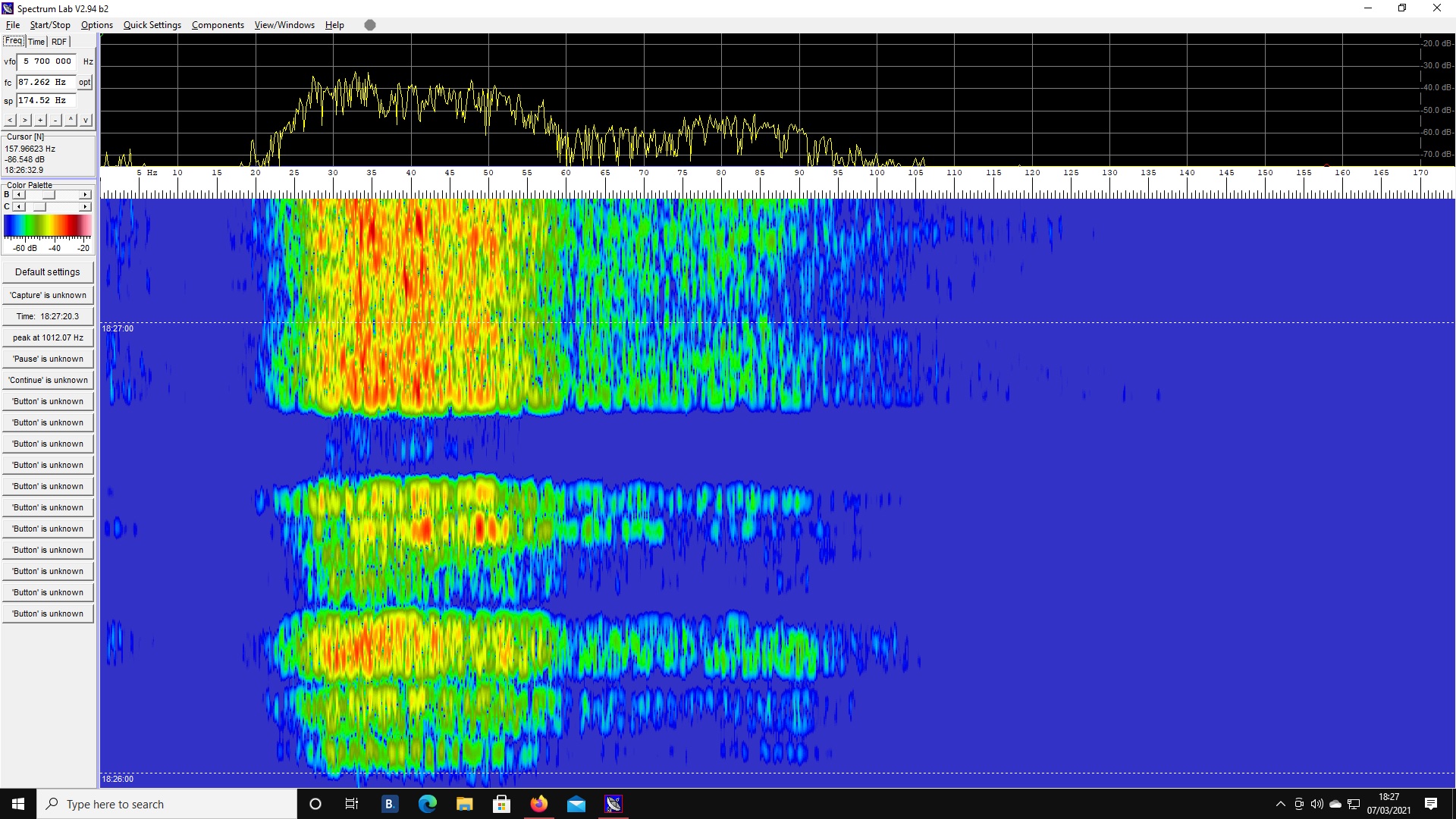 It's really about translating the frequency of the LFE.1 as well as it is important to translate the LCRS into the room so the LFE.1 a narrow part of the frequency range with wavelengths so long and stuffing all that in the room.
I can use a direct amplifier reading via the Lucasfilm Ltd THX Sound System and using the audio mixer I can patch in x6 Behringer ECM8000 microphones and look at two waterfalls at the same time to sort of THX/TAP align it. 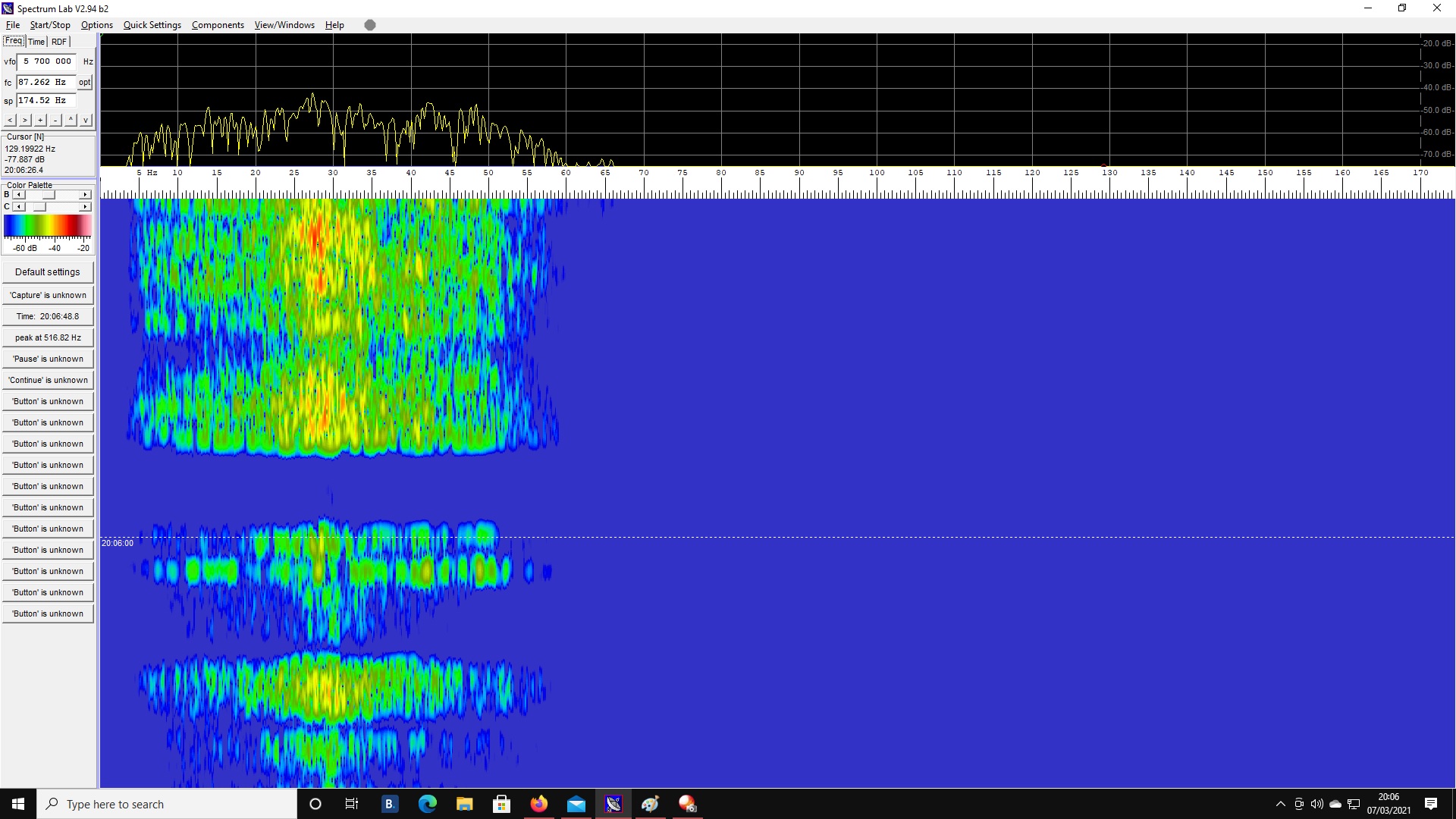 Playing the scene in the lab with the stargate over and over. Extending the LFE down lower - waterfall monitored on the Lucasfilm Ltd THX Sound System.

Digital_Thor said:
I try to do what Geddes describe, which is to let the mains run down as far as possible, creating a low-order downward slope and then cross the subwoofers above this slope. An example could be F3 at 60-70hz on the mains and subwoofers crossed between 90-110hz - depending on what fits the best in a given situation.
This should add 2 more sources of bass in the critical region around 40-110hz and also let them blend better - leaving only bumps to dampen, since suck-outs are something to avoid.
I found that getting the mains to blend well with the subs - really helps improving the overall sound. How do you do it?
Click to expand...

Yeah this is also what I do. Mains running full range and then subs having a much larger overlap with the mains (depending on the location - one is front and center and it tapers at ~180hz and one is directly behind and I have it taper off at ~80hz).

I guess the main question I have with this approach is if it truly is the best thing for the mains?
Would all the low frequency info cause significant distortion when the mains try and reproduce it?

My potential solution (which I actually don't know if it truly fixes the issue / helps) is to run my speakers full range yet plug the ports and let the speakers naturally 'roll off', but I don't know if that would be adequate and prevent my speakers from trying to reproduce the 20-60hz which they simply cannot do with any true fidelity.

Does anyone have thoughts on this?

red is amplifier direct THX amp return . green is JBL subs in the room mic placed middle seat front row , and blue microphones inside JBL subs left/right of the front . so three graphs with few trade-offs like 40Hz dip i can fell that in with other JBL subs at back of room and one middle behind the oled .

i , not bothered to adjust the off-sets to see which frequency is closest nearest to the amp direct frequency response as that is the original . 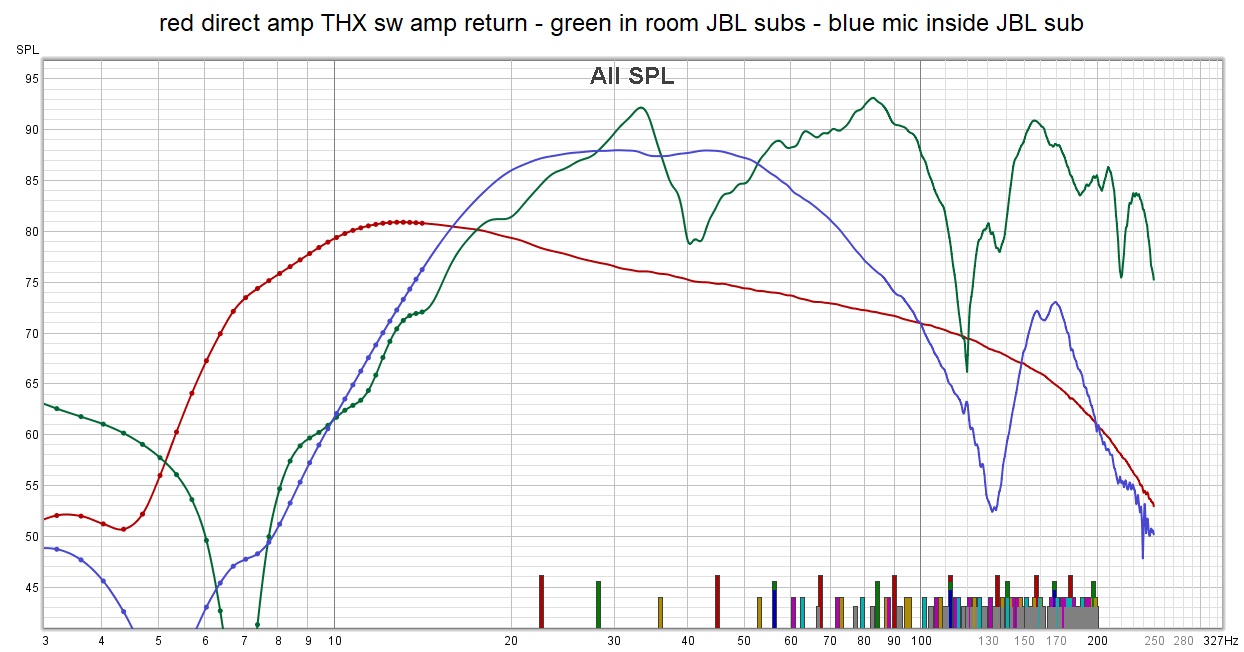