This is a review and detailed measurements of the Stax SRM-Xh which powers ("energizes") the Stax Pro electrostatic headphones. It was kindly purchased used by a member and drop shipped to me. I don't know what it originally cost but I see them going for $300 or so on ebay right now. The unit I received did not come with a power supply so I used my 12 volt lab bench.

I must say, the Xh seems down right cheap and utilitarian compared to my SRM-313 next to it: 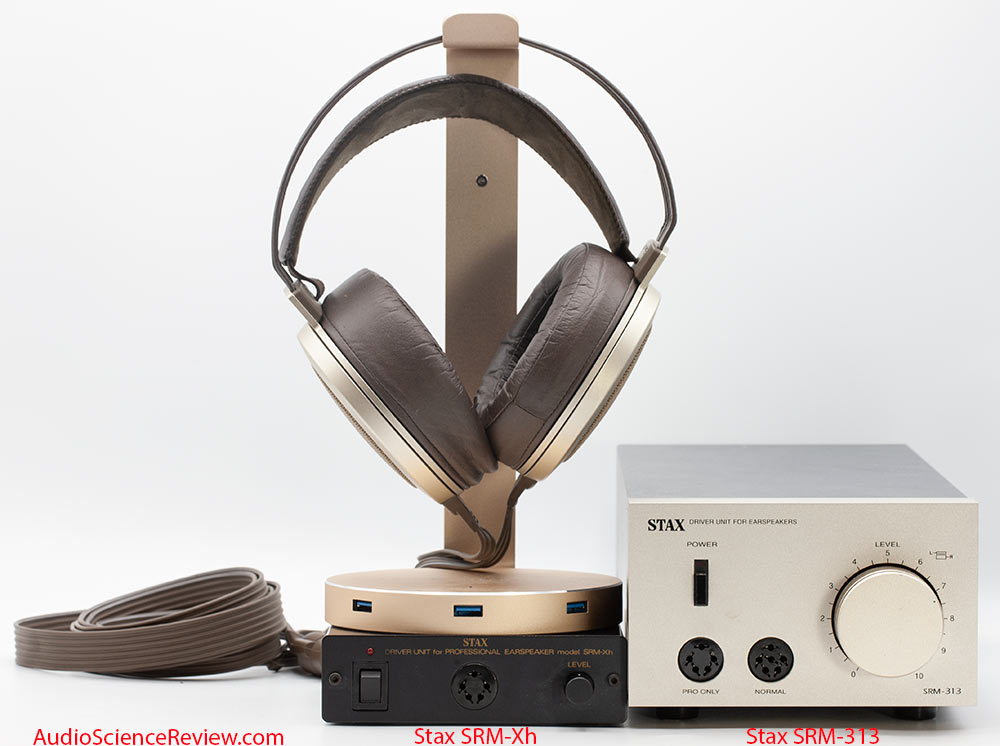 While mine has the nested dual volume controls, the Xh lacks that which did not allow me to compensate for the channel balance in my measurements.

As I noted, no power supply to power the unit. I went to make a connector for its 12 volt jack, only to realize that it uses reverse polarity of the shield being positive. This should have been outlawed many years ago!

In the picture you see my SR-007MK1 Stax headphone. It is an old fellow and its headband is not as tight as it used to be so please don't pay super attention to the frequency response measurement. Purpose here is to compare the amps.

Stax SRM-Xh Measurements
I adjusted both units to deliver 94 dBSPL with 1 volt input and measured the frequency response of the SR-007: 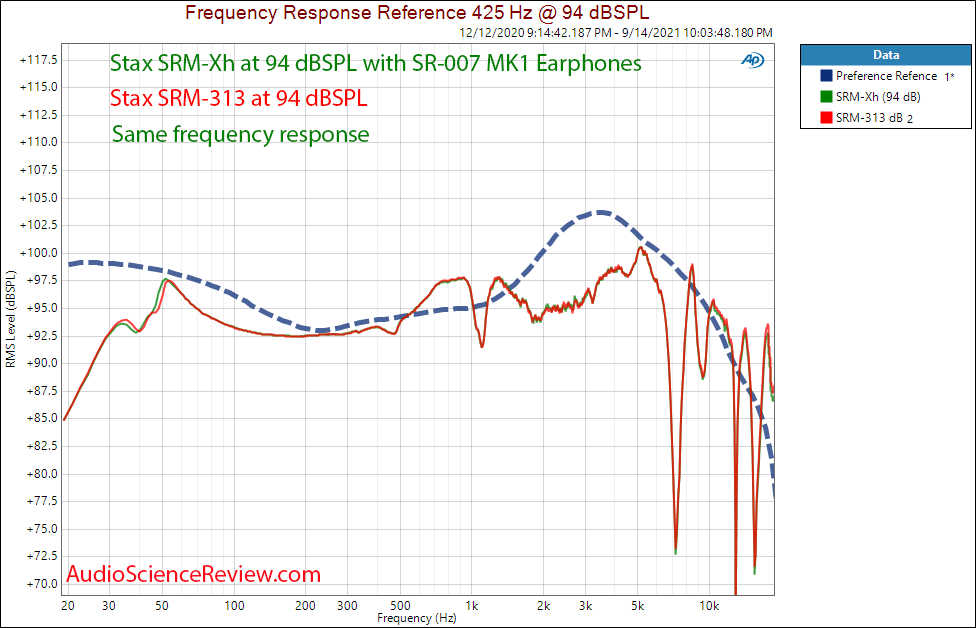 Basically there is no difference in frequency response which is good. I later performed a more accurate stepped response and that showed the tiniest drop in high frequencies compared to SRM-313 which you can also see in the above graph with green peaking through.

What is notable is the lower distortion of the Xh in bass frequencies even though it has a worse spec than SRM-313: 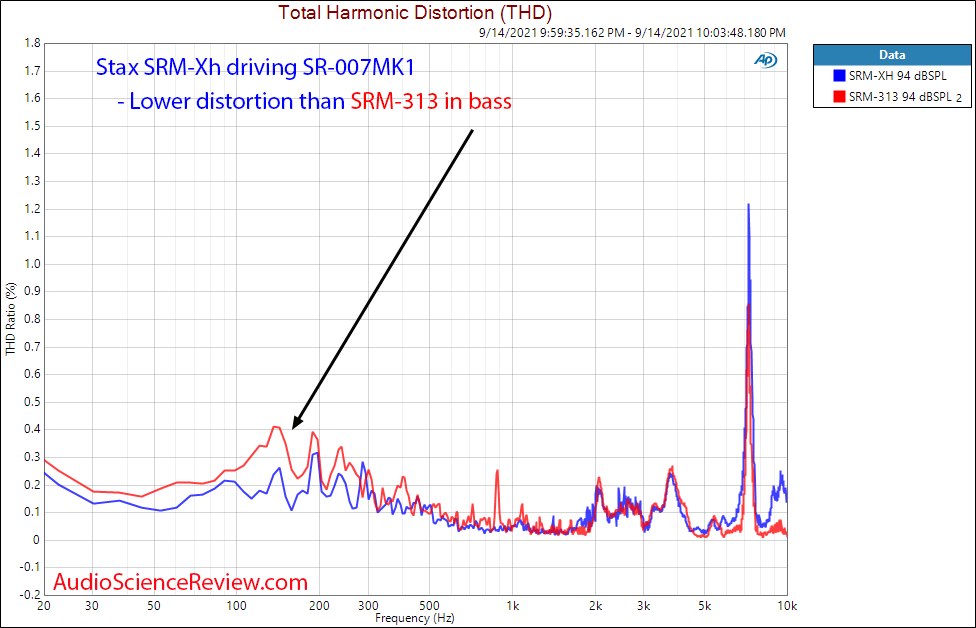 One of my key complaints about Stax setup is lack of volume so I wanted to see where each one clipped. So I ran a traditional stepped sweep measuring THD+N versus measured level at 400 Hz: 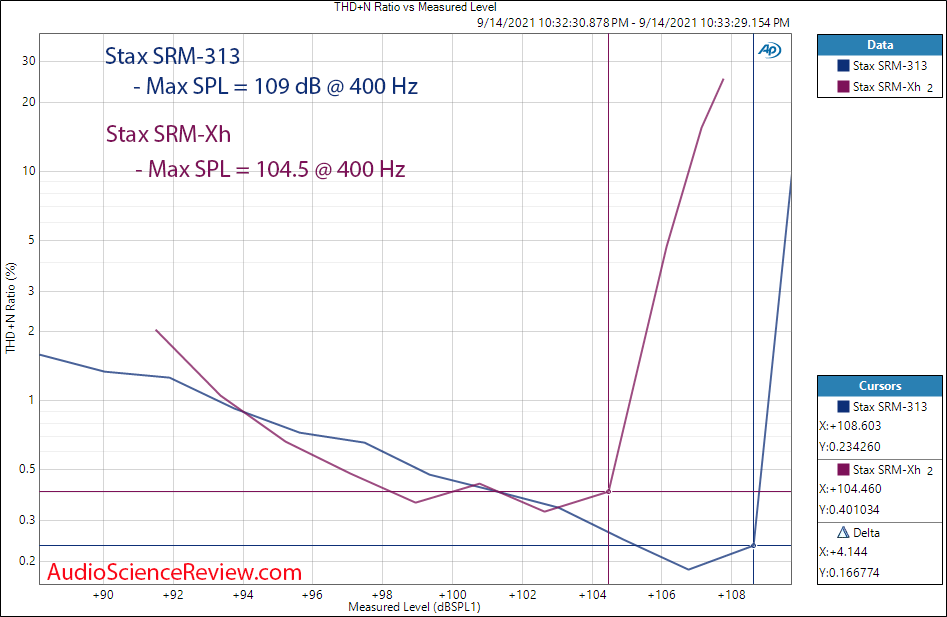 We can clearly see that the SRM-313 pulls ahead of SRM-Xh delivering about 4 dB more acoustic power. At lower levels though as we saw in our previous test, the SRM-Xh does product less distortion. BTW, I could easily hear the clipping with the tone completely changing at that point so what you see, is what you get subjectively.

Specs show the max output of the SRM-Xh as 280 volts and the SRM-311 at 350 volts. Someone can do the math but seems consistent with me getting more output from the latter.

Stax SRM-Xh Listening Tests
I drove the Xh using my RME ADI-2 DAC V2 as the source at 0 dB. At lower volumes the sound was nice and I could not detect an issue. Turn up the volume past 12:00 o'clock though and peaks would get static. Drive it more and sound would just fall apart.

For comparison I then switched to SRM-313 and I could get a bit more volume before it too started to crackle. It is interesting that loudness which is a human perception requires tons more power as that 4 dB advantage was not that apparent. Still, I take this as even the max volume here, I found the overall loudness to be lacking.

SRM-Xh Teardown
I took a quick look inside in the process of verifying the polarity of the input voltage: 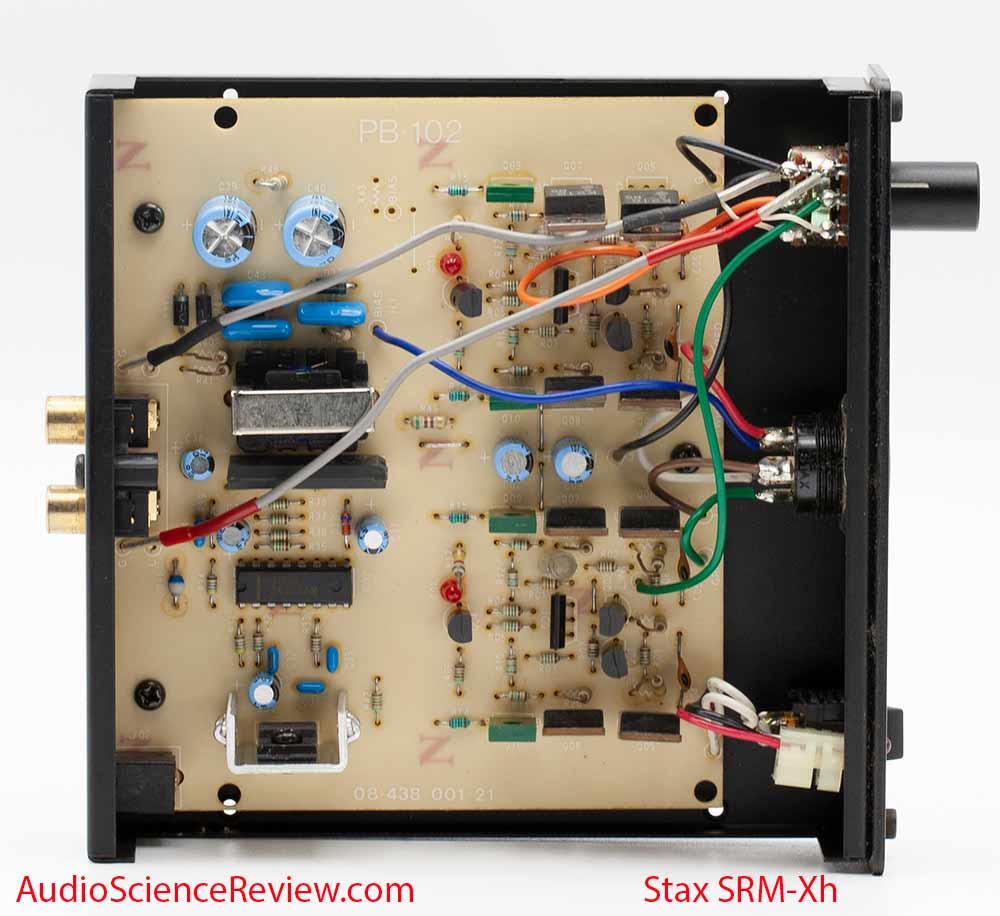 Conclusions
I imagine the SRM-Xh is much cheaper than my SRM-311. If so, it seems to serve that purpose of providing a much more economical amplification solution to drive the Stax headphones. Personally I like to see much better drive capability than just making things smaller and cheaper. Anyway, there is not much of a reference for me to judge the unit as good buy or not. You have the data; you decide.

amirm said:
loudness which is a human perception requires tons more power as that 4 dB advantage was not that apparent
Click to expand...

I am thinking about buying a NAD m28 power amp and reading your comment I thought: does it really make sense to add this external amp to my Denon x6500 AVR, as the gain in loudness will roughly be the same 4 dB? How would you decide whether you need these extra 4 dBs or not? Thanks!
a guy in [a recurring] search for the perfect AVR, floorstanding speakers, subs & over-ear headphones
OP

There will be some but not nearly as much as one would hope. Most of the loudness comes in the first few watts. After that, every doubling requires so much more power.
Amir
Founder, Audio Science Review
Founder, Madrona Digital
Contributing Editor, Widescreen Review Magazine
Click for My Technical Background
My YouTube Channel

Vovgan said:
I am thinking about buying a NAD m28 power amp and reading your comment I thought: does it really make sense to add this external amp to my Denon x6500 AVR, as the gain in loudness will roughly be the same 4 dB? How would you decide whether you need these extra 4 dBs or not? Thanks!
Click to expand...

There may be more advantages than just 4dB increase in output (e.g., lower noise floor or distortion).
R

I’m thinking, is “many ears ago” a typo or a deliberate pun?
OP

riffmaker said:
I’m thinking, is “many ears ago” a typo or a deliberate pun?
Click to expand...

That build looks very basic to me.
Amplifier SINAD list

Ata said:
Yes, there is not much in those Stax amps for what they ask in terms of price, and performance is lacking. As a Stax owner I wish Topping or SMSL would make an amp to "rule them all" as they do with DACs and headamps for non-stats. I would jump on it right away.
Click to expand...

There are high end offerings from other brands, but the prices...

Matias said:
There are high end offerings from other brands, but the prices...

Interesting as Xh is truly the worst of the Stax energizers/amps and has not enough power to power a lambda properly, which is visible in the SPL.

You should try a KGSSHV amp or the KGSSHV-Carbon amp, the difference is night and day compared to any of the Stax amps, which are all inadequate to drive the SR-007s. Add some bass EQ and all the Stax amps completely fall apart at anything above background music levels, while the KGSSHV designs don't struggle with this at all.

I hope you can soon do a STAX SRD7 pro (not SB Version) connected to something like a topping A90 XLR out. I’m getting more power and subjectively better transparency from such a set up than all other solutions I have ever tried. Including some big hot expensive amps.
D

milosz said:
You should try a KGSSHV amp or the KGSSHV-Carbon amp, the difference is night and day compared to any of the Stax amps, which are all inadequate to drive the SR-007s. Add some bass EQ and all the Stax amps completely fall apart at anything above background music levels, while the KGSSHV designs don't struggle with this at all.
Click to expand...

It's not that severe. I own a Carbon and SRM727II. Bought the carbon because 727 was distorting with closed port 007 at high volume with massive bass EQ, Carbon solved that for me. Short of that use-case, I don't think Earspeakers scale with amps

Great to see Stax reviews! Are you going to review your Stax headphones or some other models? Really interested to see those, since I own Stax L300 Limited and just love the 'airy' Stax sound compared to any other headphones out there.

I have a SRD-7Mk2 which has both a Pro and older Standard outputs, I've only ever used the Pro output with my SR-L700 ear speakers, connected to a 27KG Crown Studio Reference II, power amp, it is complete overkill for driving the L700's.
I have the power amps volume pots set to about 10 o'clock and control the main volume from a 32 bit DAC, It does sound exceptionally good, has a sort of open speaker like sound, with a very natural tone to vocals and instruments.
I do wish a company like Topping or SMSL would make a modern copy of the SRD-7Mk2 or SRD-Pro using similar sized construction (essentially a passive dual transformer box, one per channel, the active section being only the 580V bias supply, which is a voltage multiplier) with excellent low distortion transformers and a flat frequency response, they could then be connected to the current compact desktop power amplifiers being released like the Hypex, Purify or even SMSL DA9 / Sabaj A20 for a very reasonable outlay.
And yes would like to see a SRD-7Mk2 or SRD-7Pro Tested by Amirm.
1

Is there a particular reason the amp itself is not measured but just the amp-headphone combined?

PeteL said:
Is there a particular reason the amp itself is not measured but just the amp-headphone combined?
Click to expand...