This is a review and detailed measurements of the SMSL HO200 balanced headphone amplifier. It was sent to me by the company and costs US $399.

I like the feel of the mechanical switches on the HO200: 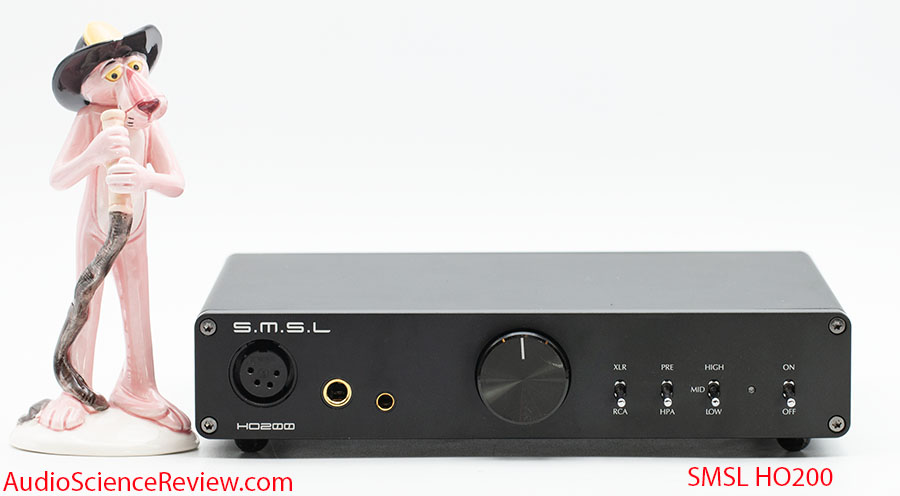 Notice the USB input for changing firmware that handles protection circuit duty. Nice new trend in this regard.

I focused my testing on the headphone output. I trust he pre-amp outputs are just the same but with higher impedance so should have identical performance.

SMSL HO200 Measurements
With balanced headphone amplifiers, I always start with XLR input and balanced output. Here, I ran into some issues in that regard with my measurements not matching what is published and some variability and sensitivity to cabling. In one case one channel had more distortion which then went away as I changed XLR cables and such. After some testing, I realized that best performance is achieved with unbalanced output, not balanced! This forced me to test a number of variations. So let's start with the best case which is 1/4 HP Out: 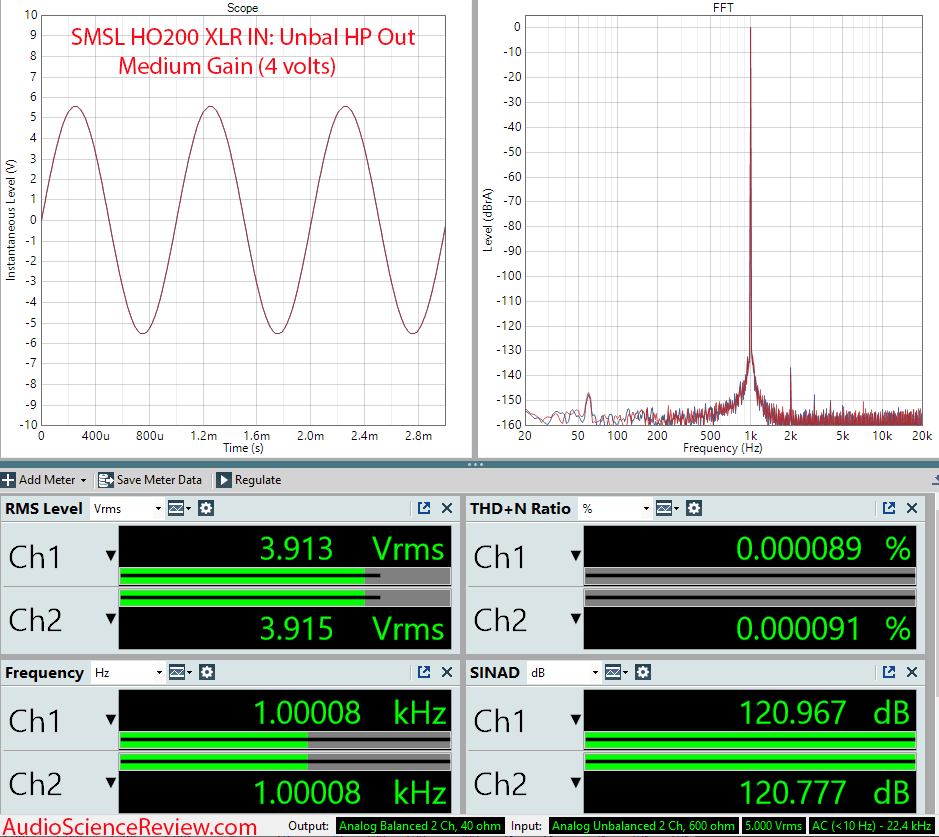 This level of noise+distortion lands HO200 neck and neck with the best of the best: 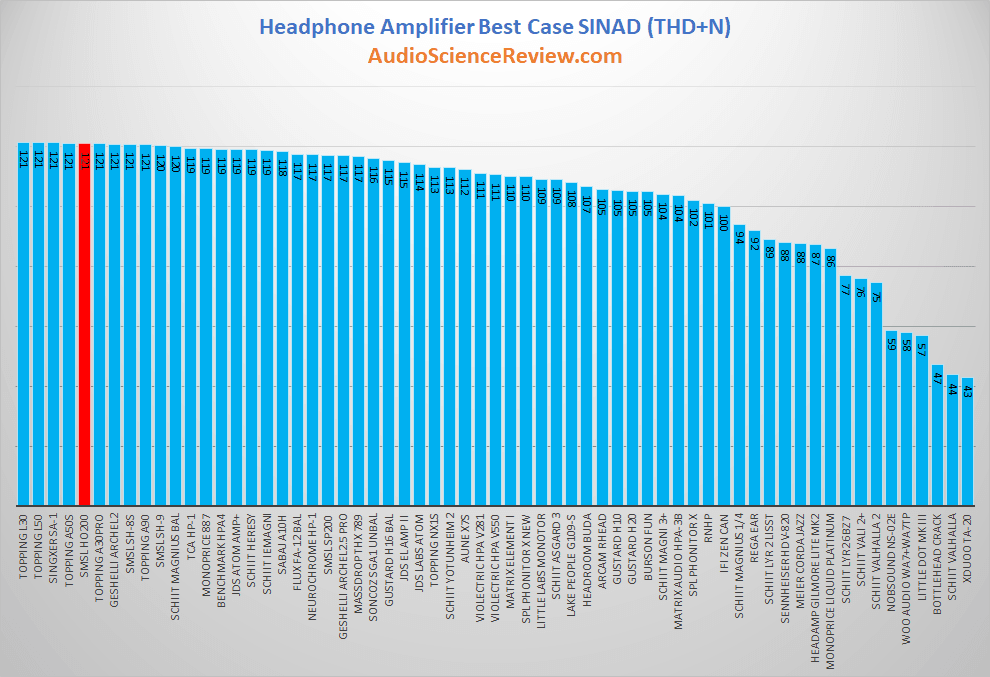 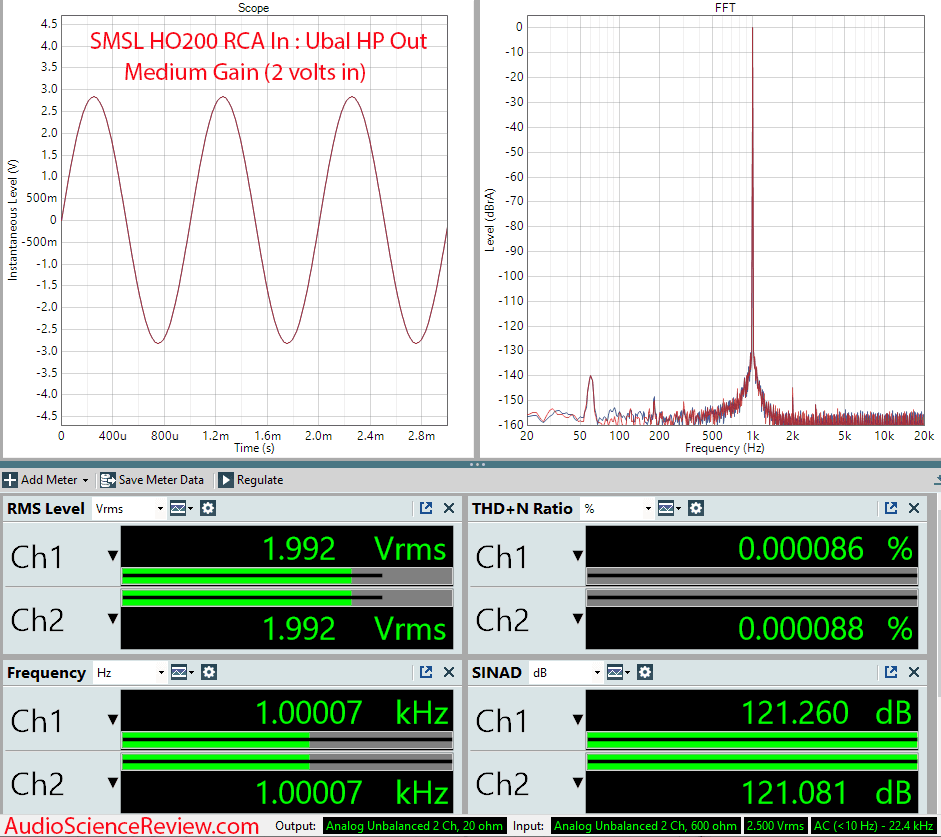 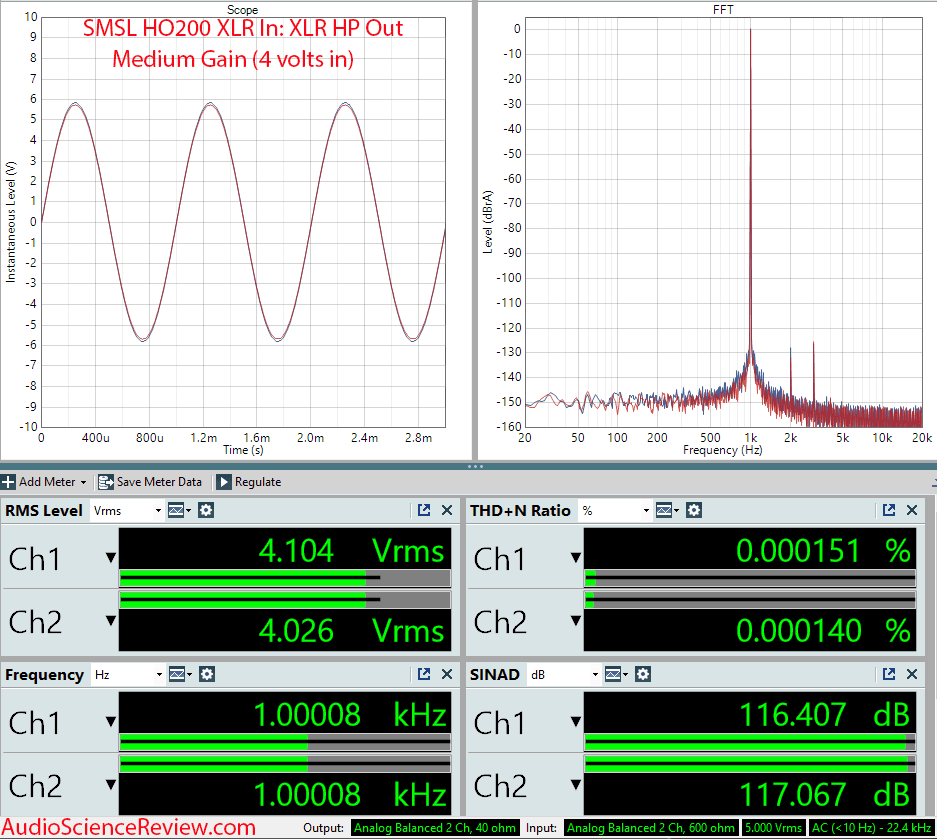 But if we switch to RCA input, we get back up there: 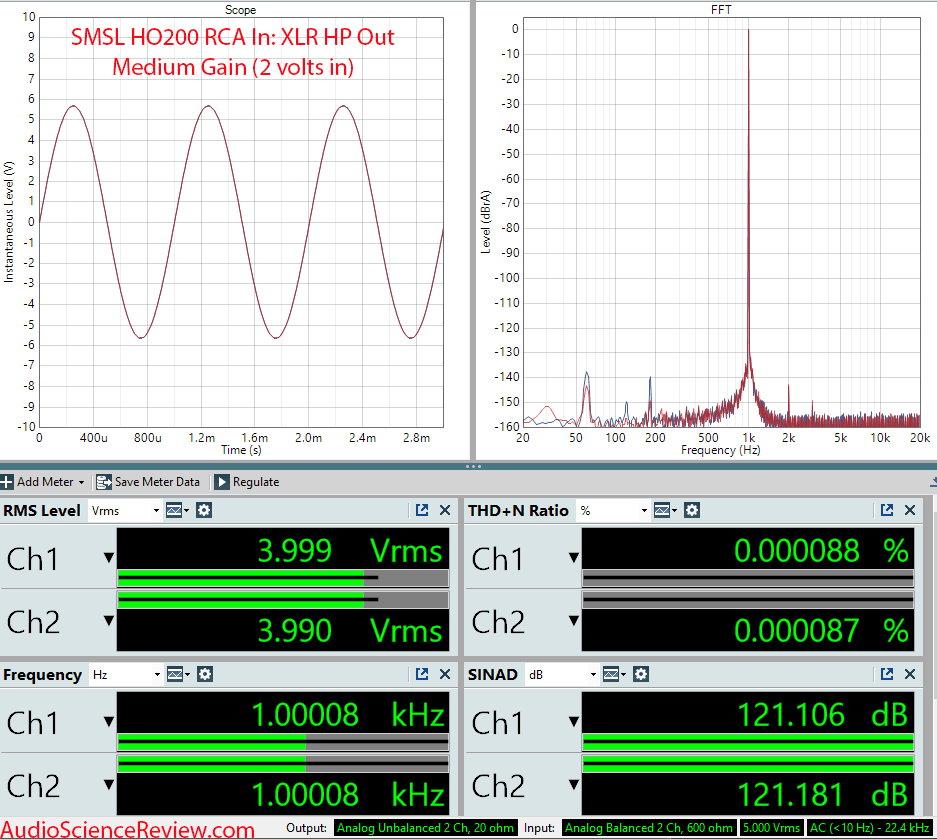 The issue seems to be gain management. With XLR Input, I had to dial back the volume know whereas with RCA, I would have it at maximum. Normally I expect balanced input and unbalanced inputs to produce the same output with 4 and 2 volts input respectively. I don't like having RCA with the best performance because as you see in the last graph, it lets in mains noise. Best performance should have been XLR input to Balanced output.

Note that we are talking about inaudible differences either way but for the battle to land on top of rankings, this makes a difference.

You can see the same drop in performance in our SNR tests with XLR output:

And the same with 50 mv output but with less difference:

Using the better of the two, HO200 again lands shoulder to shoulder with the best there is:

Frequency response test is usually uneventful but such was not so here. The amplifier went into protection as I swept below 12 Hz: 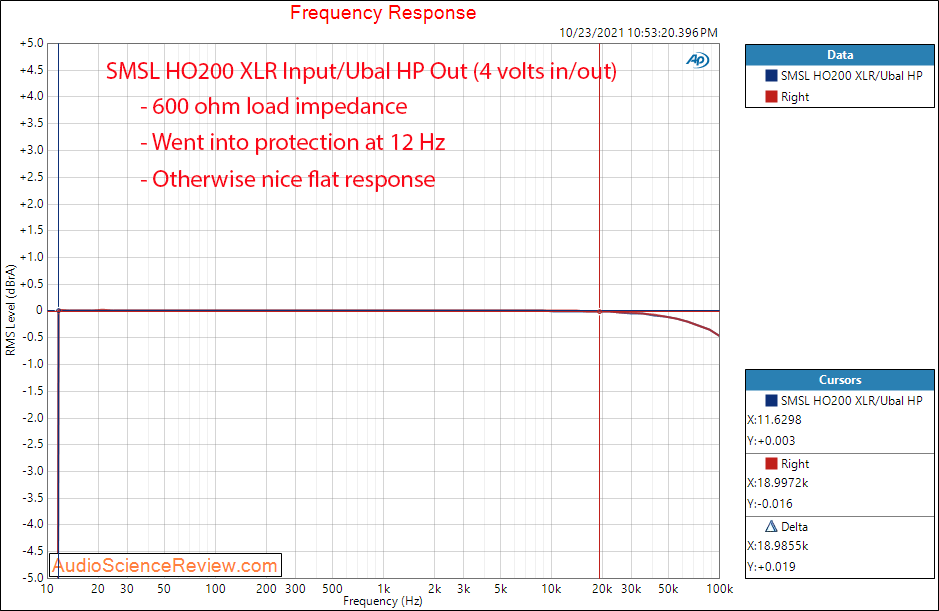 While content with < 20 Hz may be rare, they do exist and I hope SMSL investigates and provides a firmware update for this.

Power vs distortion+noise is the most important test here so let's start with 300 ohm load: 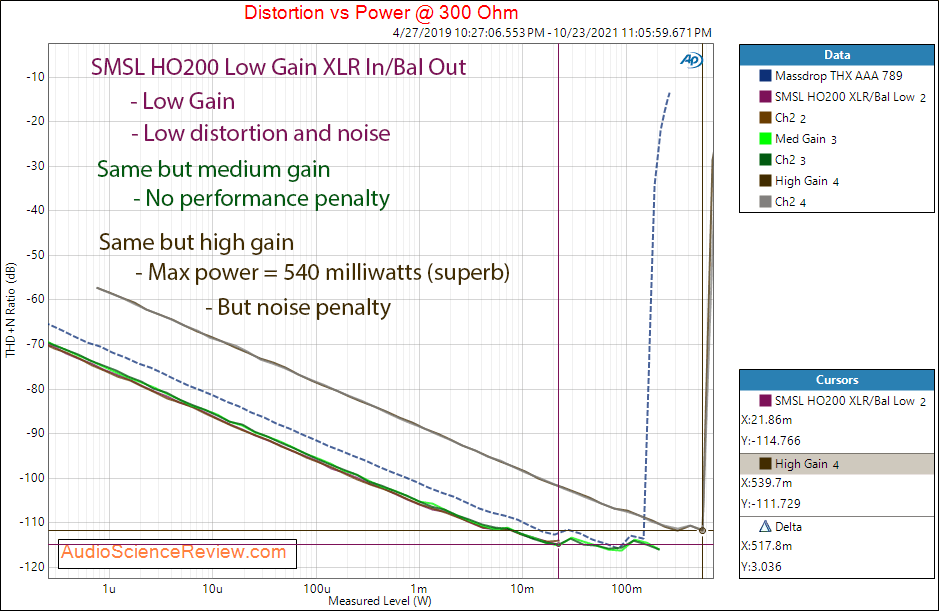 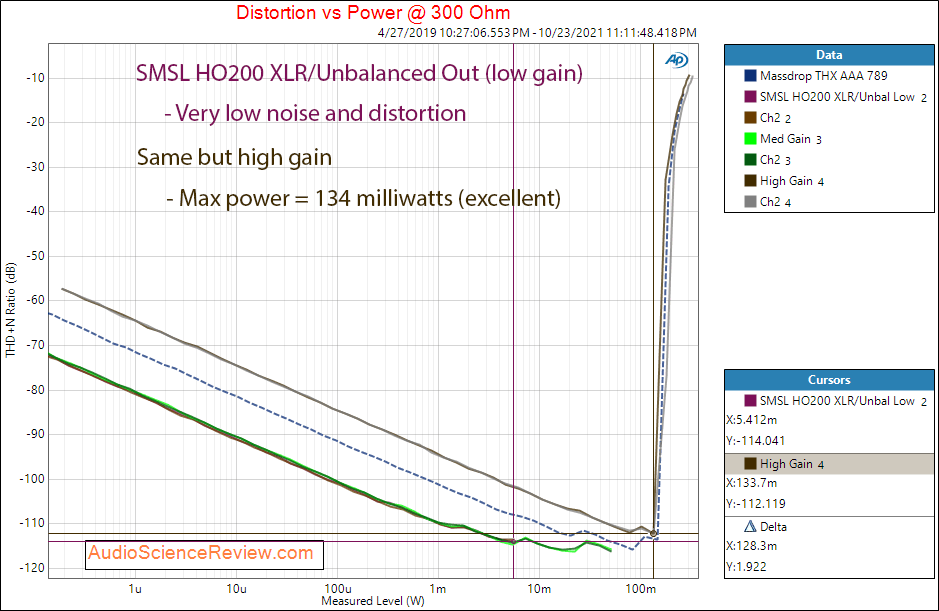 Once again we see the superiority of the unbalanced mode in lower noise but as usual, you get more power with balanced output. Same happened with 32 ohm load: 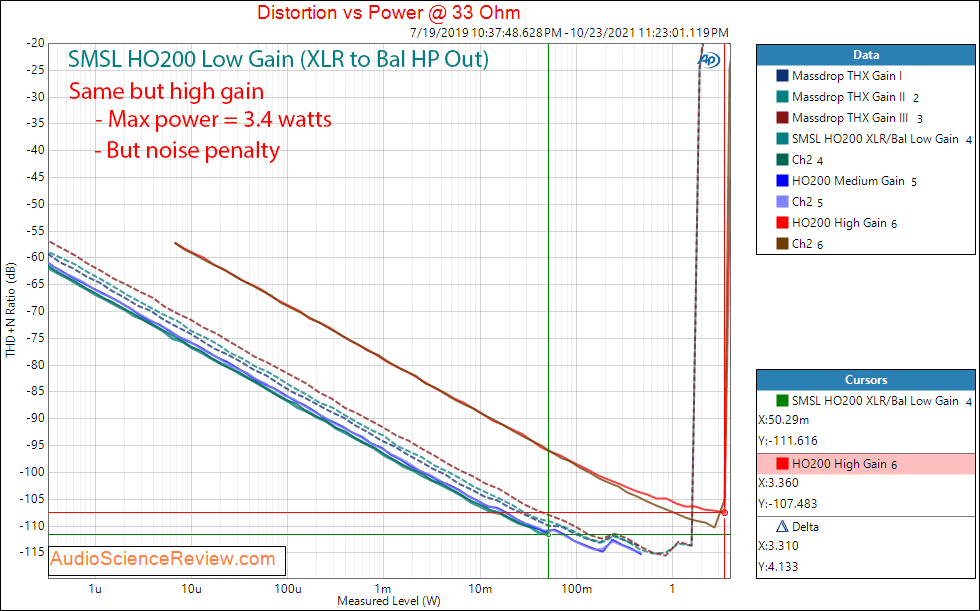 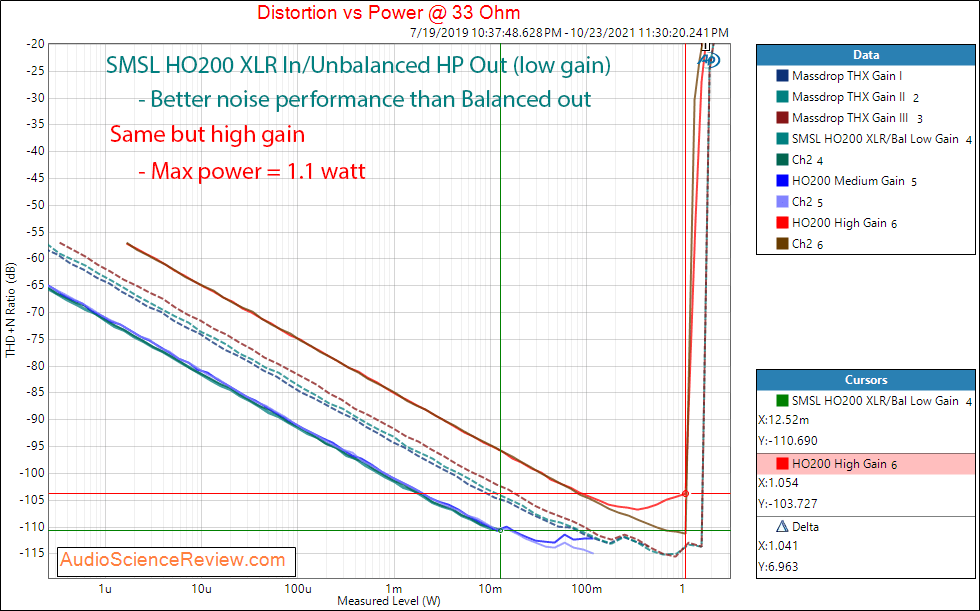 Sweeping full set of loads, we see that RCA mode just clips but the balanced output goes into protection at lower impedances: 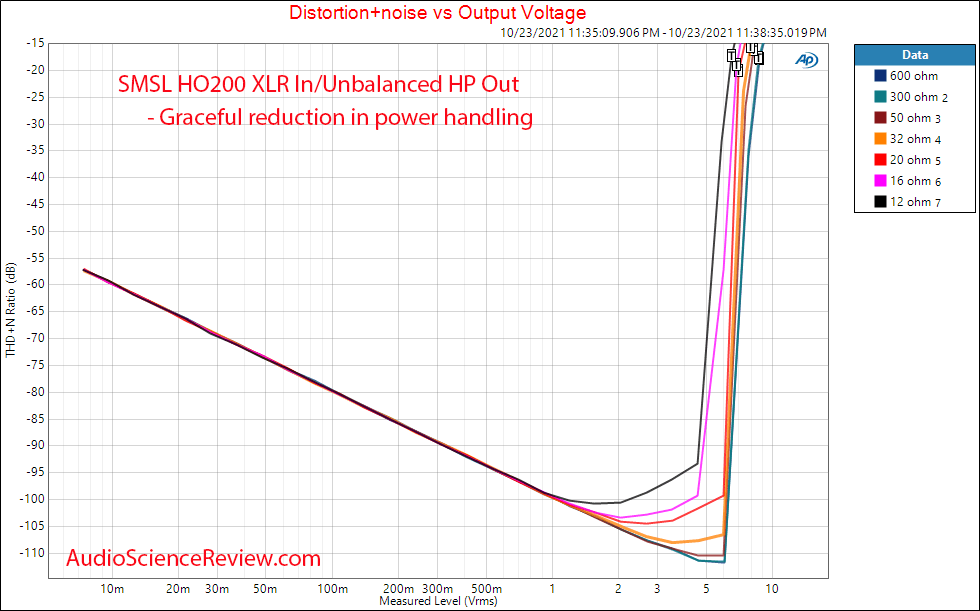 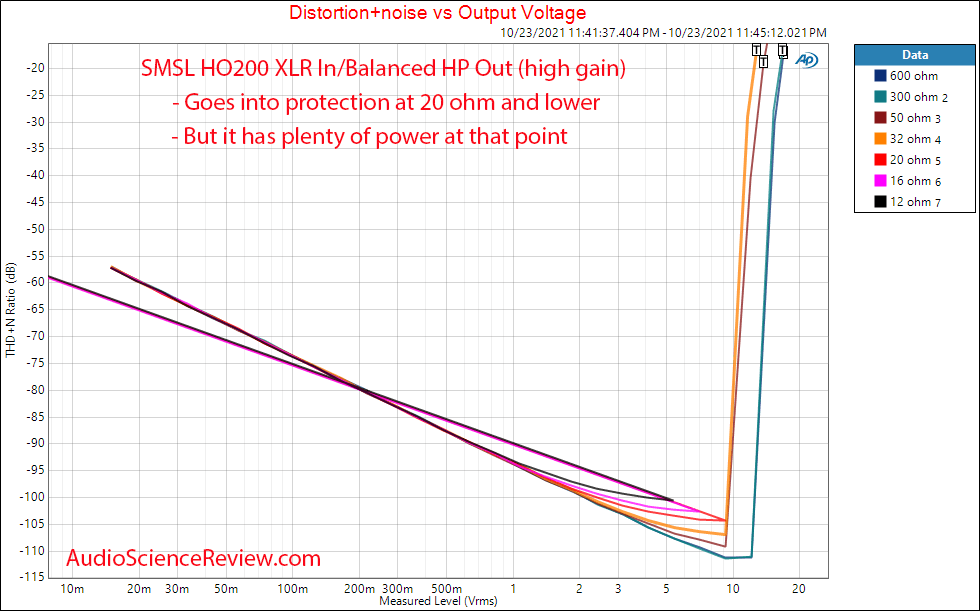 Note however that at the onset of protection, you still have a ton of power so I would not take this as a negative. Balanced output has higher gain so gets pushed harder and hence the pull back.

Channel balance was good but as you usual, your mileage will vary: 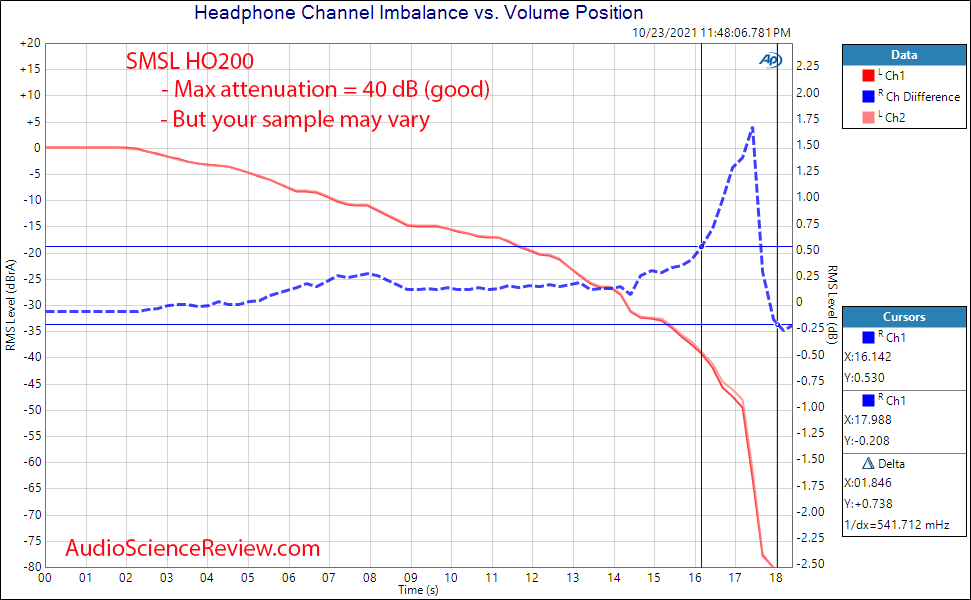 Listening Tests
I did not get a chance to listen to the HO200. I expect it to perform superbly. There is a lightning storm going on and we just lost power (running on generator) so I want to get this out quickly.

Conclusions
The HO200 is a powerful headphone amplifier with very low noise and distortion. There is however something slightly odd about its design when it comes to balanced I/O. It is not enough to have any audible consequences as sum of distortion+noise is below threshold of hearing. But when it comes to competing with top of the class, I like to see this not be there. As well as the protection against playing sub 12 Hz content.

flipflop said:
@amirm @Lero The protection kicks in at 11.6 Hz. The text on the graph is wrong
Click to expand...

Ah, another day, another box that does pretty much the same thing as other boxes in the price range and if you plug headphones in there you won't notice the difference. But it has a few quirks so now stuff like that differentiates these amps.

At this point I'm more and more interested in long-term impressions and experiences since reliability, BQ etc. are going to become more important as more of the gear measures as clean.

Amir's cursor is at 19khz, which is probably what you're seeing. I also got confused as I wasn't sure at first which of the two lines above 20k were the plot, but ofc the cursor doesn't make curves unless Amir gave it some home made wine
EqualizerAPO → Topping EX5 → HiFiMan HE6se
Topping EX5 → Hypex FA123 → Jim Holtz's Bordeaux

IMO headless is the best rating a headphone amp with no PEQ functionality can attain.
http://hometheaterhifi.com/author/jay-haider/
B

Are the outputs on the back just pass through, or are they changed with the front controls?
Sawdust is man glitter

What's the difference of this panther and golf one?
OP

Madjalapeno said:
Are the outputs on the back just pass through, or are they changed with the front controls?
Click to expand...

xema said:
What's the difference of this panther and golf one?
Click to expand...

xema said:
What's the difference of this panther and golf one?
Click to expand...

What is the panther holding BTW?

It looks like a snake...
Last edited: Oct 25, 2021
Ricky Roma: I subscribe to the law of contrary public opinion... If everyone thinks one thing, then I say, bet the other way...
OP

This is decent though
M

amirm said:
I focused my testing on the headphone output. I trust he pre-amp outputs are just the same but with higher impedance so should have identical performance.
Click to expand...

I appreciate what you do and hate to ask you to do extra things, but spot checks on preamp outputs for these amplifiers seems like a good idea, especially when a device exhibits odd behavior in other ways like this one does. The 'desktop preamp' is certainly a marketed use case for these kind of amps. Maybe just make it a simple dashboard for preamp to verify performance....your review depth has certainly expanded over time, and you've had some noteworthy findings as you've done so.
S

Budgeter said:
Having a poll is really great. I would love to have it included in every future review. Perhaps, a durability/reliability poll (e.g. die after X months, channel imbalance, etc.) or some sort is better since just saying good-bad is not that meaningful.
Click to expand...

It would really be cool if we could have a ratings page where you choose your piece of gear and rate it on some of this stuff - you rate how satisfied you are with BQ, usability/ergonomics, you mark whether there is audible channel imbalance, whether there was a malfunction at some point.

Build up a database. Then one could actually quantify unit to unit variation of the same model and statistically compare different products on various things. It's not perfect since it depends on the honesty of people doing the marking - that they 1) actually own the product and 2) are responding honestly. Even with those (and some more) limitations, it would be really interesting to have.
You must log in or register to reply here.