I am working on an DIY-CD-player, that is mostly salvaged from an old Sony CDP + adding a modern DAC.
The casing will be custom milled and has a motorized top lid that utilizes the electronics of the original tray.
So far so good.
But I want the design simple and not many buttons.
Thus I would like to combine the existing "Stop" and "Eject" buttons to one button without altering the original circuit
besides probably replacing original tactile switches for "Stop" and "Eject"
I assume there is at least one electrical relay needed that mimicks the short push of the original tactile switches.

It would be sufficient to trigger "Eject" by having the combined button pushed for a longer time, maybe two seconds.

I am an absolute noob in electronics and not good in logical thinking (but I know how to solder, even SMD).

So how do I make this delay?
I would like to use"outdated" hardwired electronics for this, as simple as possible.
Shouldn´t be a capacitor and a diode in series be sufficient?
While pressing the button for "Stop" for a longer time, the capacitor loads, the diode drains it after the
treshold voltage is reached, driving a circuit that powers the electrical relay for Eject...
But I guess this would only work once, after starting up, as the capacitor will not be drained completely...?
Any advice would be very much appreciated...
Thanks, Herbert

The buttons on the Sony are most likely multiplexed so maybe pressing 2 buttons at the same time may not work.
Perhaps first try to see if the tray button works when keeping the stop button pressed.

My idea would be to have the button trigger a one-shot multivibrator (set for 0.5 sec or so) and have that operate a 4066 switch connected to the stop switch and via an RC delay a second one-shot via a 4066 (or 4016) operating the eject button.
People have a tendency to overestimate their hearing capabilities.
Use your ears to listen to music not as an analyzer.
OP
H

Hi soldertude!
Never came into my mind that Stop might also trigger Eject by default, but unfortunately not, not in this player , just checked it some minutes ago.
Yes, the signals are multiplexed and also used for driving the VFD-Display, see the schematics.
I assume the one-shot multivibrator resets itself when Eject is not triggered so that pushing Stop several times does not
culminate into triggering Eject?
I assume a 4066 has several outputs, as well as the multivibrator, so the circuitry needs only two IC´s plus the parts defining the delay?
All the best,
Herbert 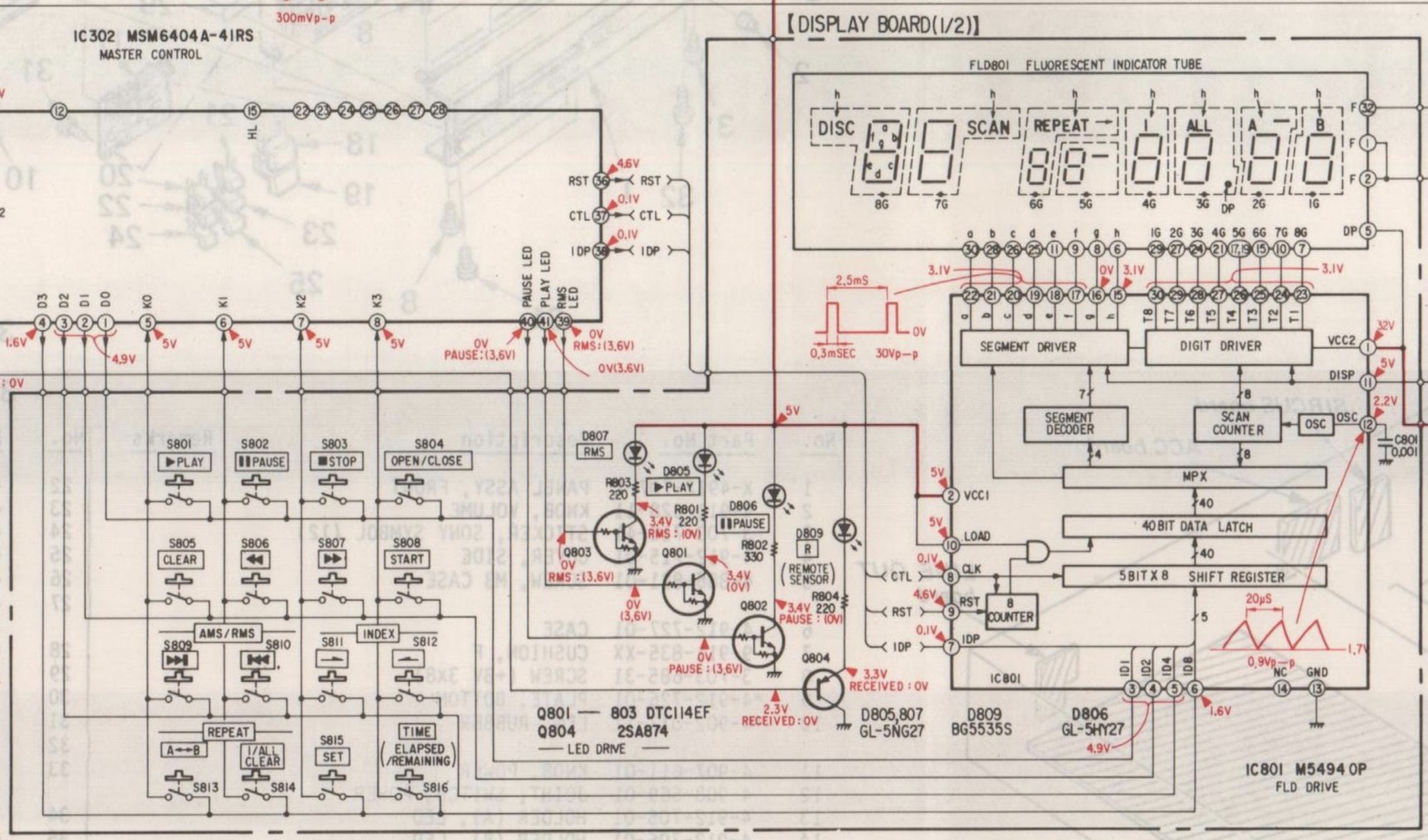 So when holding the stop button pressed you can operate the open/close and the tray opens/closes ?

You can use a single 74HC132 (quad Schmitt nand gate) that can create the needed signals from one switch.
It is easy to create monostable and timer circuits with one IC and a few RC.

If needed I can design the logic.
People have a tendency to overestimate their hearing capabilities.
Use your ears to listen to music not as an analyzer.
OP
H

So when holding the stop button pressed you can operate the open/close and the tray opens/closes ?
Click to expand...
This is what I want to achieve, this does not work with the original circutry.

If needed I can design the logic.
Click to expand...
This would be extremely nice, as I am extremely bad at this. 5V is correct

Thanks a lot, Herbert 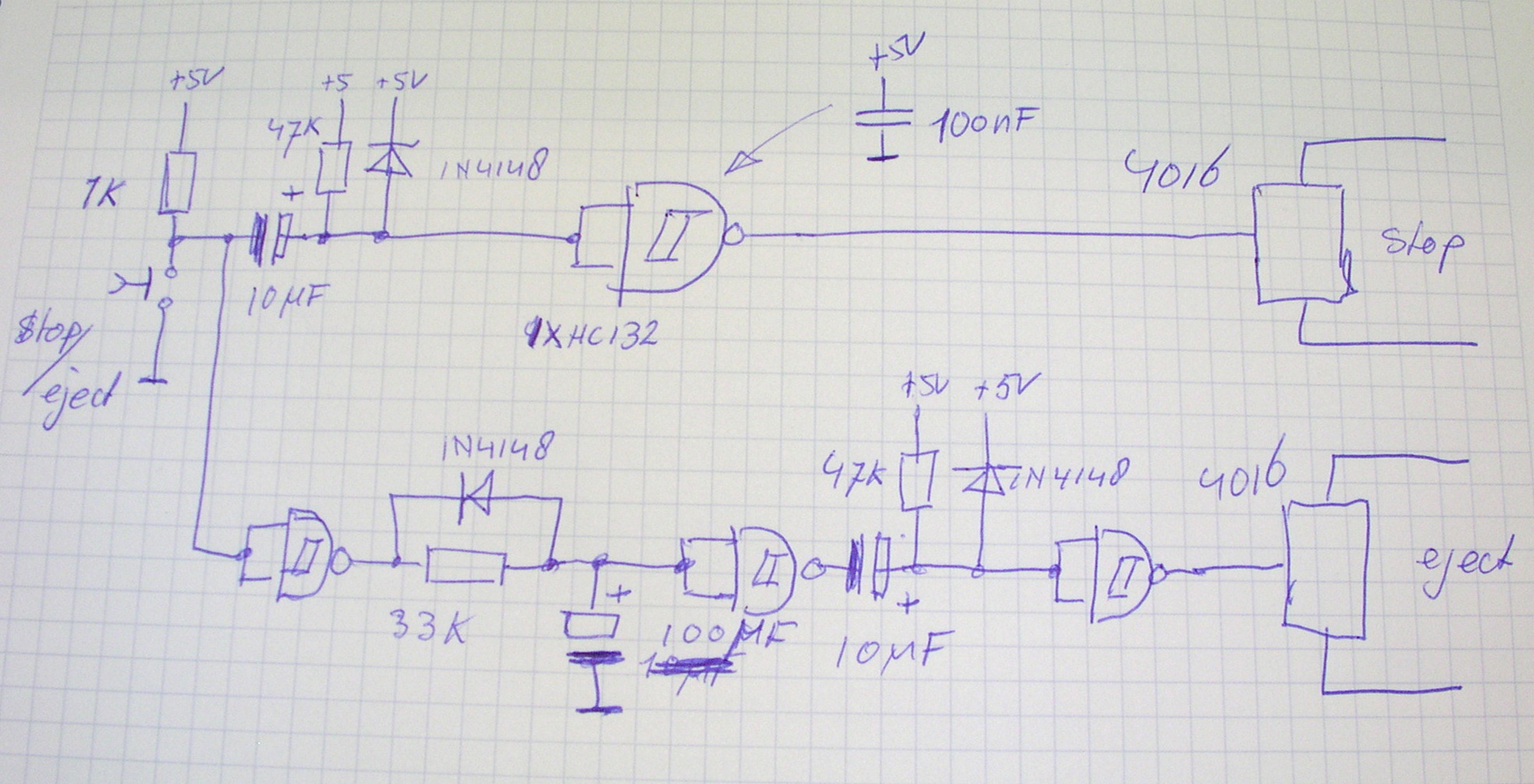 74HC132 and HEF4016 needed.
For the unused 4016 connect the control pin to ground and the corresponding input pins.
For different timing you can adjust resistors and or capacitors.
The 74HC132 needs 100nF directly across the power pins (14 and 7)
The same for HEF4016.
People have a tendency to overestimate their hearing capabilities.
Use your ears to listen to music not as an analyzer.
OP
H

Cool, thanks a lot! How long is the delay in this configuration?
And STOP and EJECT are not triggered permanently by the 4016,
just for a short time, i.e. half a second, like the original tactile switch would to?
100nF fpr the power pins is for decoupling between +5V and GND?
All the best,
Herbert

Herbert said:
Cool, thanks a lot! How long is the delay in this configuration?
Click to expand...
about 2 to 3 seconds. Vary the 33k resistor for different timing.

Herbert said:
100nF for the power pins is for decoupling between +5V and GND?
Click to expand...
Yes
People have a tendency to overestimate their hearing capabilities.
Use your ears to listen to music not as an analyzer.
OP
H

Hartelijk dank solderdude! In the german HiFi-Forum, people did not answer the same question for weeks,
besides one throwing in small pieces of "information" to make a noob even feel more dumb,
claiming things like "why should I make a drawing for you for free?"
Here, it took three an a half hours to get a drawing I can now work/solder on without even begging...
Very cool! Hope I can give a little bit back at some point.
You must log in or register to reply here.
Share: Facebook Google+ Reddit Pinterest Tumblr WhatsApp Email Link