Show us your home theatre setup

"Effortless" wall of bass. When my two 15" subs get here from Florida, they will replace all of those.
Last edited: Dec 1, 2022

Todd k said:
I’m lucky that I live alone because no sane woman would let me take over the living room like this. 75” Sony drops down out of ceiling for watching tv. Room actually sounds pretty good with a cathedral ceiling and a catwalk with pickets for the bridge above.
Click to expand...

delta76 said:
So I joined a few Facebook groups about home theatre, and you can guess, most of the setup there are Klipsch. Klipsch is the most popular setup, and it is not even close.
So I wonder, while the majority of ASR are probably into Hifi/stereo setup alone, there must be a significant portion of you guys and gals are into Home Theatre. Show us your setup
Click to expand...

@delta76
Mine is still heavily on being in the, “a work in progress” side of things.
and… not Klipsch.

and… it’s in a 100 year old house with 11’ ceilings. So there is pretty much one dual purpose room available.
And the puppy is generally running wild in it.

Me first (And apologies for the mess…
Click to expand...

metoo (regarding a mess). 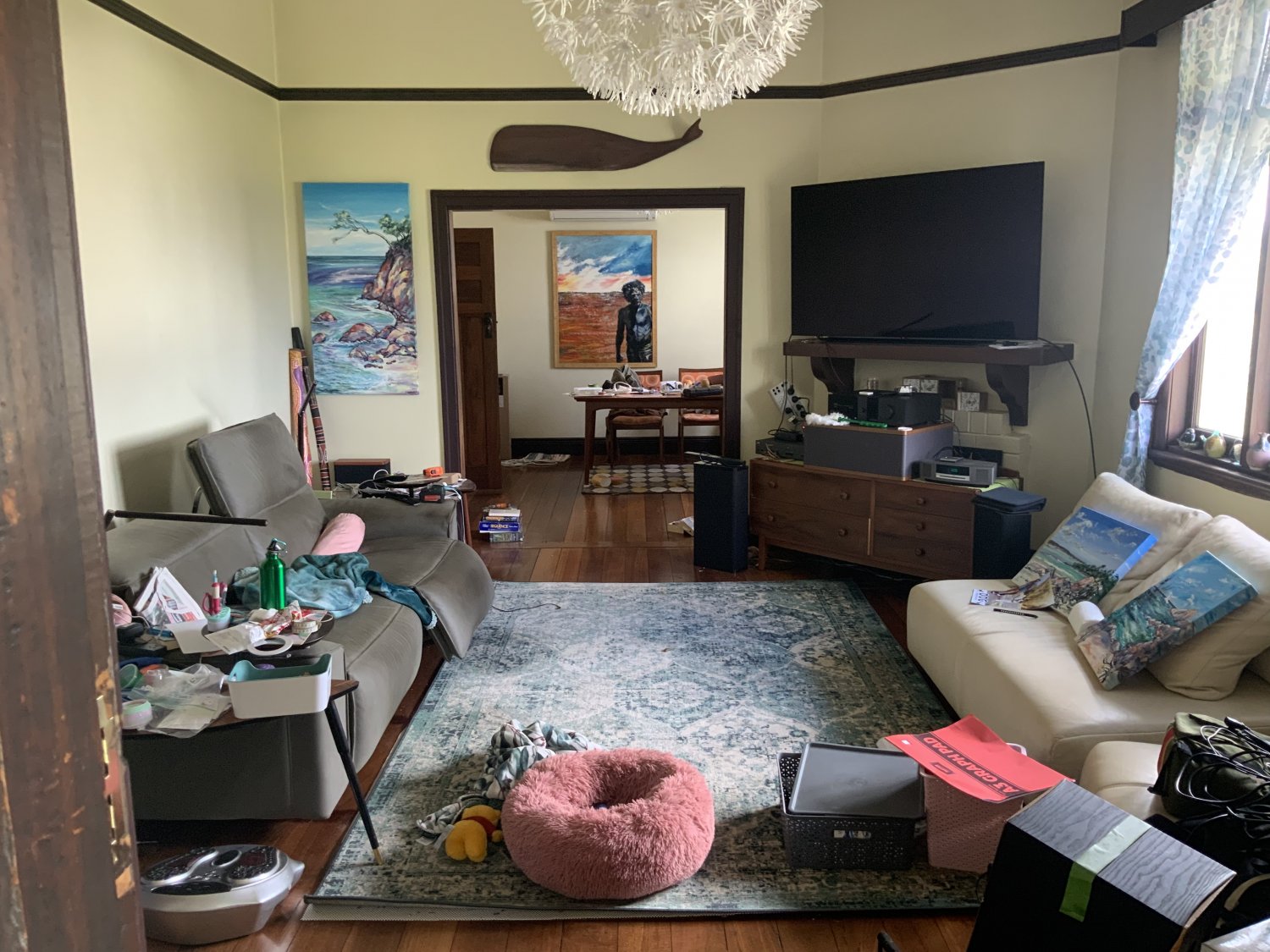 I have an existing 2 channel, so the goal was to integrate the 5.1 in with that.
I had purchased a used center channel shipped to @Amir, and it was tested and reported on ASR.
Erin had also tested my front speakers last year.
In both those threads a few people added PEQ settings to acheuve a smoother FR… so I need to poke those into the AVR, and also the DAC for when I use that.

Also purchased 2 pair of used surrounds for the set up.
(it is my first HT attempt)

Current the 2-channel “back bone” is in another house.
So I am using the surrounds as both LF/RF and LR RR (rear surrounds) with the LS speaker visible near the didgeridoos.

The TV will jump off the hearth to live in front of the window, as further mentioned below.

delta76 said:
I did minimal room treatment because it's the living room and even having a sound absorbing curtain is not approved by my wife. Still a significant improvement over the tv speakers, but I could do better.
Click to expand...

I did make that wooden whale to use as a coat rack, and it was supposed to have hooks for coats and be near the front door. However the Mrs hijacked into main lounge room as she said, “It looks nice, i though it was going to look like s___”...

We sort of agreed on a table in front of the main window with a TV lift so we can look out during the day and at night the TV can raise up.
That is a work in progres with the saws, sanders, etc.

The Mrs talked about the room having an ocean theme, and also making some curtains or macrame hangings.
I asked about having some manta rays on the macrame, and was met with a few questions, flowed by that would be great.
They would be layed up from veneer or maybe fibreglass on a mould that is the curved shape of a manta ray.
Obviously I want them as a diffuse scattering devices, by they will identify as artistic elements.

The second scheme is to have some a roughly 4’ x 4‘ square cloud absorbers that also have some down lights or upwards lighting.
And I will stuff the surrounds in that I am using for atmos, along with absorber around the perimeter into those. Maybe ~14 square feet for each of the two panels as 6” rockwool.

I may try some corner absorbers hidden in a bookshelf... later…

2-Channel side (eventually it’ll be in the picture):

I‘ll likely run the cables under the floor with Nuetrik chassis connectors on the TV side on the floor and have them come out behind the sofa the same way.
(After the floor is sanded and refinished… they are under the USG at the moment.)

Most of the AVRs do the calibration deal and mine is no exception and has a mic.
It sounds pretty good so far, it just took me a while to figure out that a ARC comes in through the output, like Pinocchio going backwards out of the donkey house.

@delta76 I think I have a thread on it. In any case, if you (or anyone) has sage advice… then I am all ears.

Some of those systems and rooms, in the thread, look very well done.
Last edited: Dec 1, 2022

Yes, they really effortlessly do their job along with the sealed Tyler acoustic sub with the 2 acoustic elegance 15” drivers.

I was hoping that someone who see’s the pic of my room could maybe give me a tip on the room in terms of diffusion. Sarumbear where are you? I think I have some space under both ends under the bridge and the large wall over my ex fireplace which I turned into an equipment rack area (accessed on the rear by a door, very convenient) no need for a fireplace in the lowcountry. Too hot an too smelly.

Ehh, I wonder when I will show off my home theater ...
B

I was into projectors early: had a "dream vision " 800 x 600 pj when that resolution was tops. Worked up to a 1080p benQ which was very good.. But nothing approached the 85 inch LG OLED C model and I don't need a darkened room and screen. current other kit:
x3500 avr, BMR monitor fronts, def tech 2000 center, def tech 1000 surrounds and def tech 1000 sw. Probably need to upgrade the sw at some point.

Sorry, no pic, that ain't going to happen. But here's a diagram of my very ad hoc HT setup ... 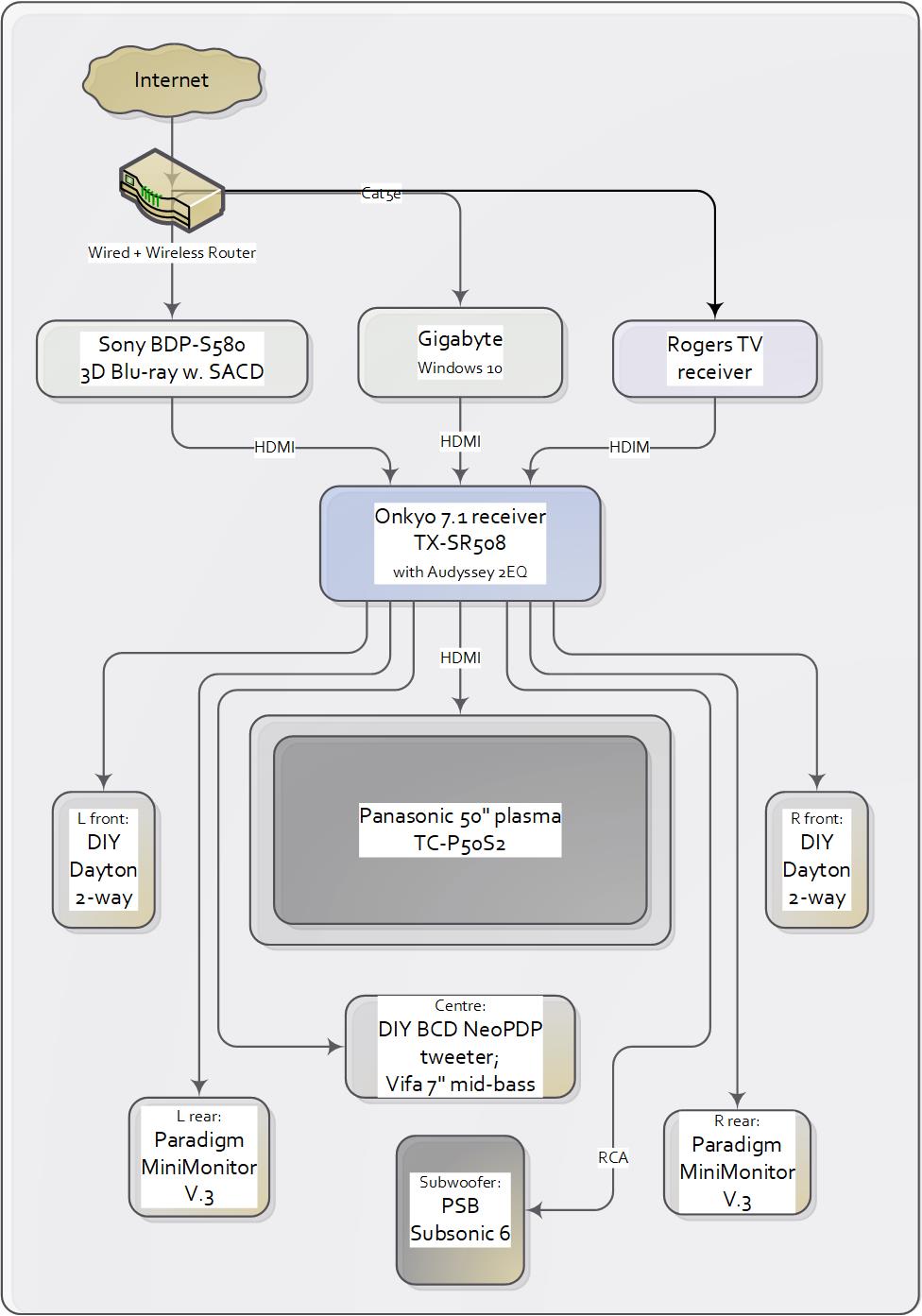 I plan to move the rear height speakers forward to just behind the ceiling beam.

That's my semi-theater In the sense that the sound is stereo (2,1 with subs).

During the day, the picture is not too bright, but we watch movies in the evening and the image quality is enough, we are happy that we changed 65'' TV to a projector (LG HF65LS), ~100'' the picture is much more engaging: 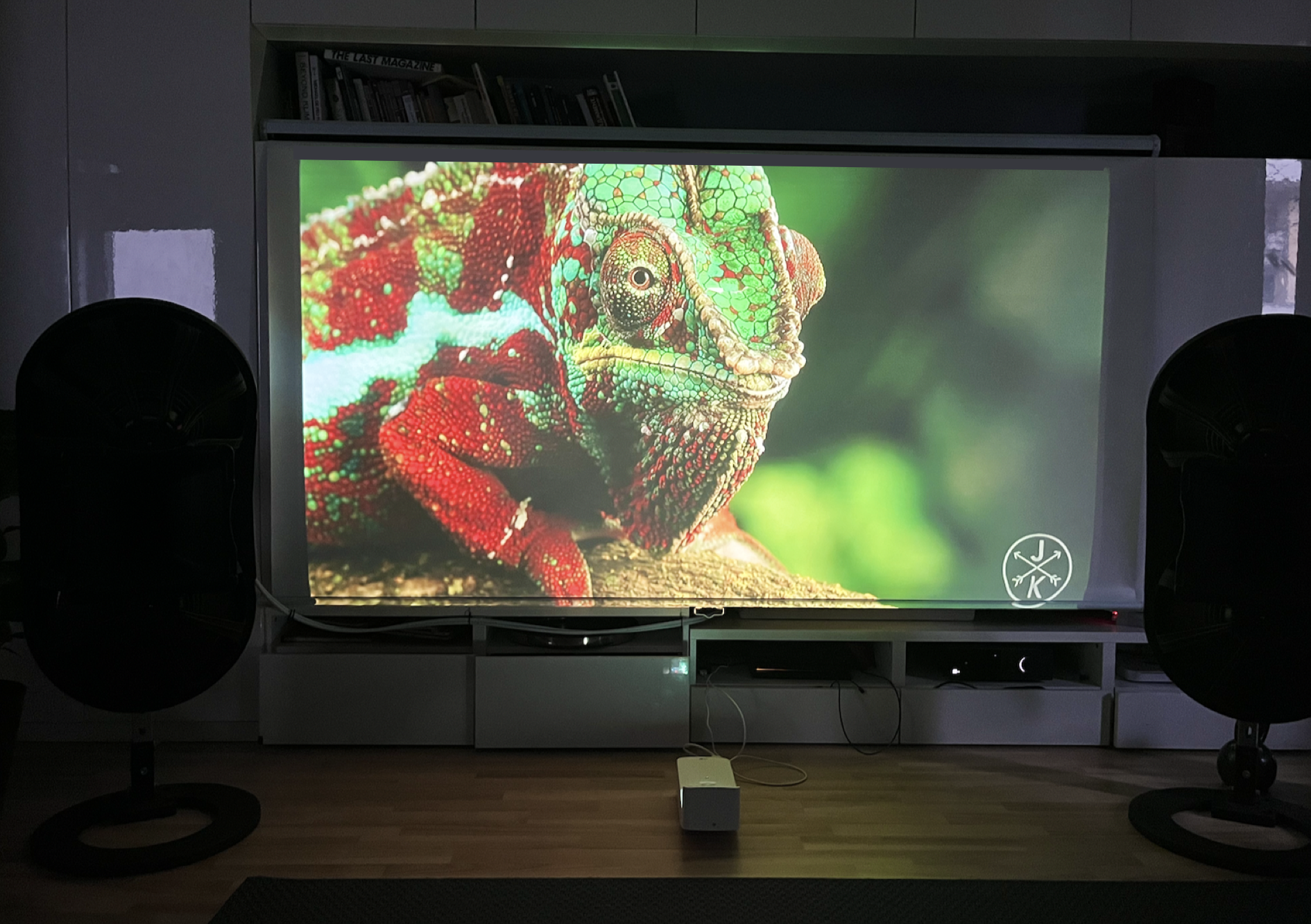 For me music is #1, but movies (and PS for my wife) also with pleasure. During the day without the screen, it looks something like this. Subwoofers are at the wardrobe under the ceiling. Lyngdorf TDAI-1120 amp. DIY speakers. 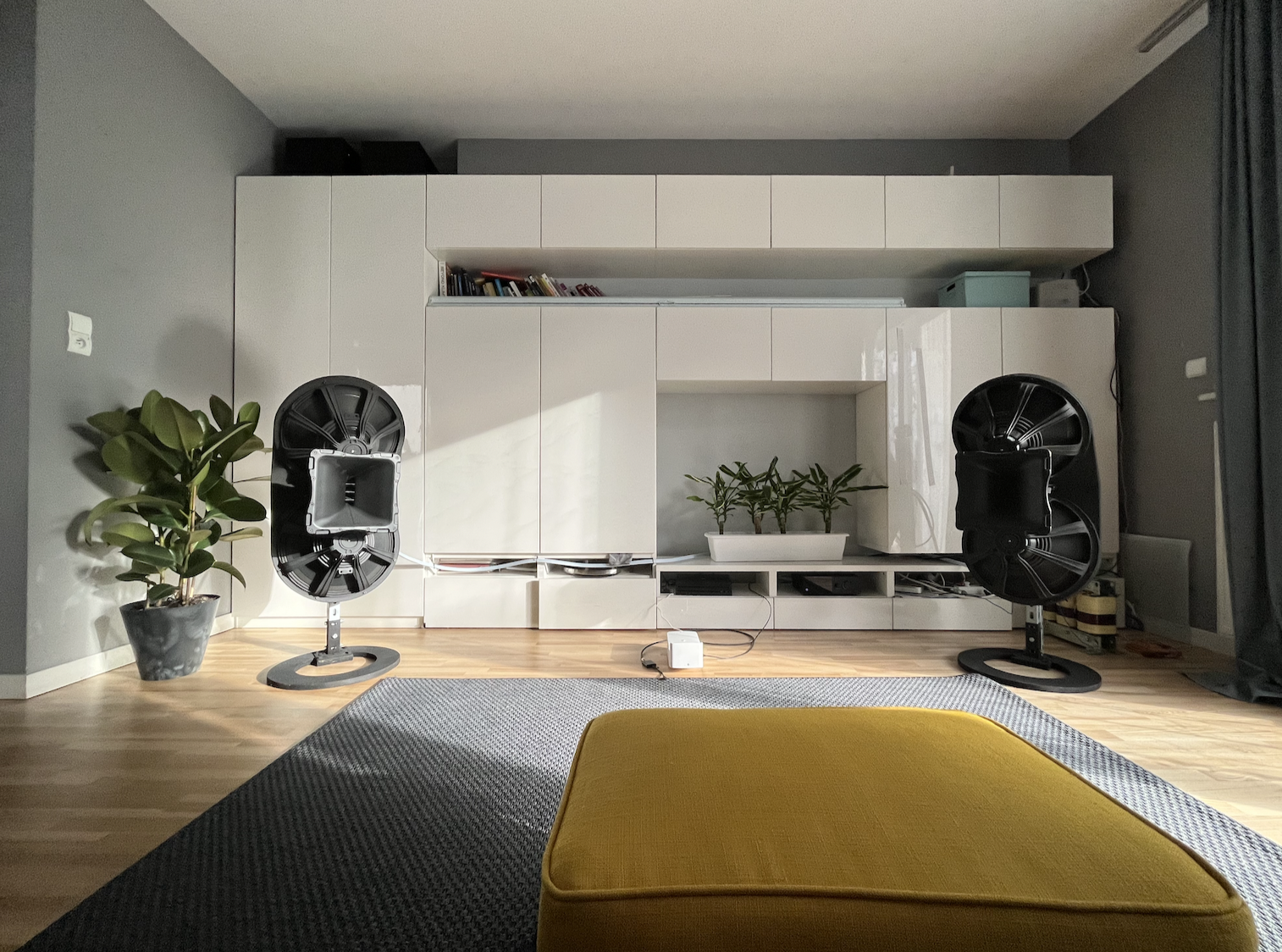 Arguably there are probably more people getting 5.1 systems than 2 channel?
(Dunno, but sorta guessing)

olegtern said:
That's my semi-theater In the sense that the sound is stereo (2,1 with subs).

During the day, the picture is not too bright, but we watch movies in the evening and the image quality is enough, we are happy that we changed 65'' TV to a projector (LG HF65LS), ~100'' the picture is much more engaging:

For me music is #1, but movies (and PS for my wife) also with pleasure. During the day without the screen, it looks something like this. Subwoofers are at the wardrobe under the ceiling. Lyngdorf TDAI-1120 amp. DIY speakers.

I think it's love-or-hate kind of design. I find it cool, luckily my wife approves too. Some of my friends show it to their wives to make them less critical of their more conservative toys

olegtern said:
I think it's love-or-hate kind of design. I find it cool, luckily my wife approves too. Some of my friends show it to their wives to make them less critical of their more conservative toys
Click to expand...

Well I love it. Those speakers scream look at me!

I beefed up the low end with two Monoprice Monolith 15 v2 subwoofers. Loving it.

Puddingbuks said:
I beefed up the low end with two Monoprice Monolith 15 v2 subwoofers. Loving it.
Click to expand...

I love the Khruangbin, their music is extremely simple, the are always in my “background” music playlists. Some if their music videos are funny, impossible not to crack at the perennial straight face of Donald Johnson, I don’t know how he can do that.
You must log in or register to reply here.

MTM vs Bookshelf for Center Channel
2