This is a review and detailed measurements of the Rockville RPA16 "Professional" power amplifier. It was kindly purchased new by a member and drop shipped to me. It costs US $390.

The amp has a "peak" spec of 10,000 watts! No, there is no typo in there. It weights 40 pounds/18 KG so it does have some meat to it. You can probably see the bolt that holds the power transformer on top left. So no switching power supply at least. Back panel shows nice sub out option:

The fan is variable speed and is mostly quiet at idle. But even under modest power it spools up as temps climb, making a slightly whining sound: 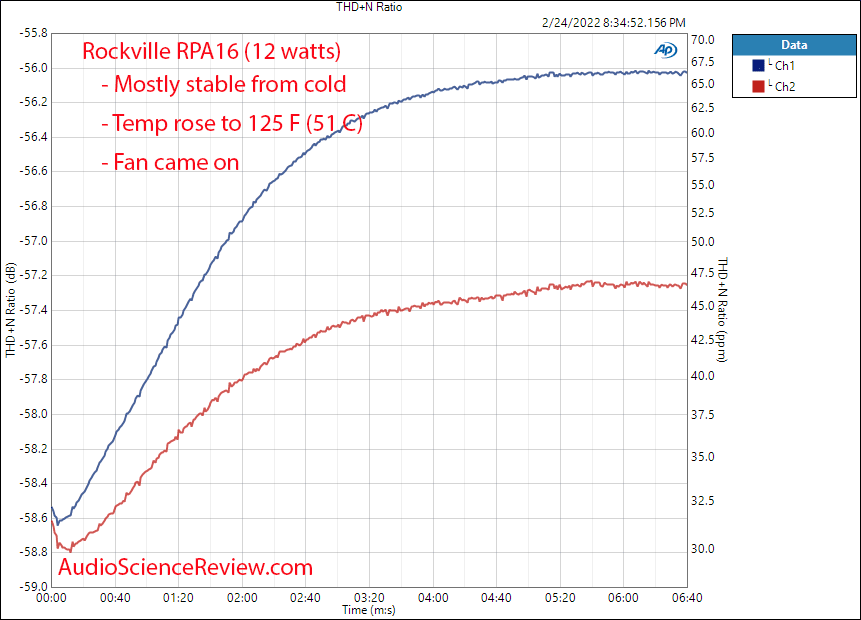 The front controls are analog actually but notched, making it harder to select an exact value. They are out of sync with each other so one notch is not the same as the other. The displayed amount is also off by a couple of dB (27 dB shown above was actually 29 dB). There is a built-in limiter and clipping light.

Rockville RPA16 Measurements
Let's jump right in with our dashboard: 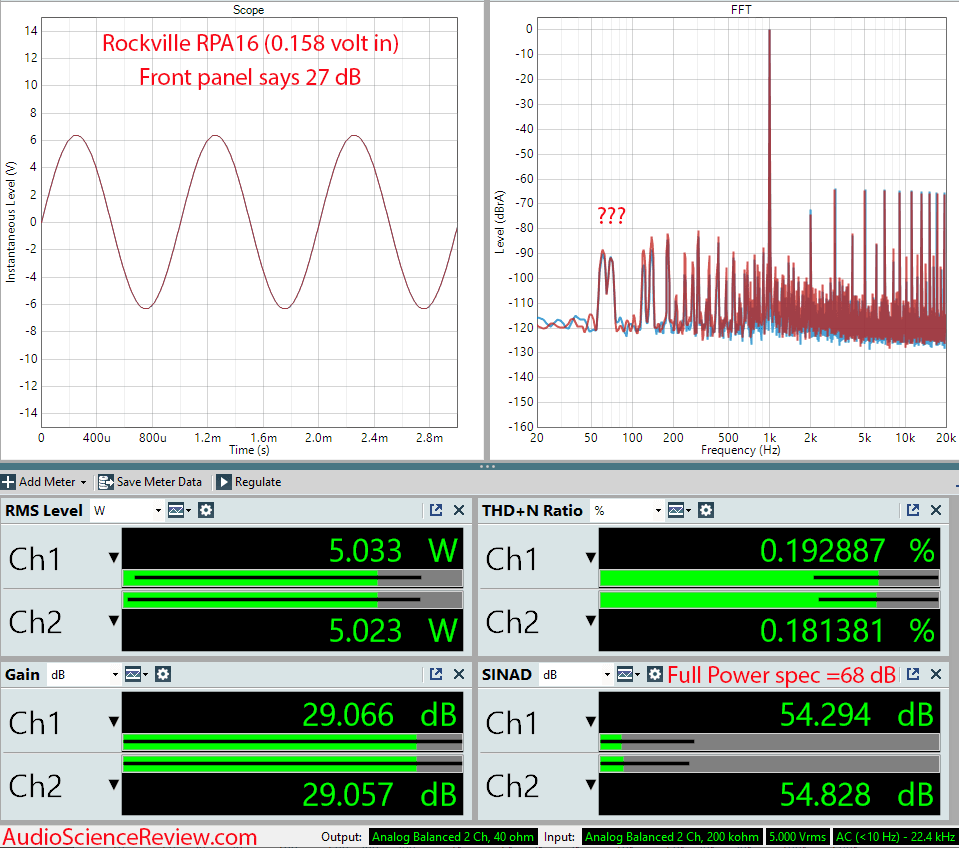 That is very odd set of spikes in low frequencies. We have the mains 60 Hz noise but also 70 Hz. At this power level though, spray of distortion at -62 dB sets SINAD though, causing it to rank as one of the worse tested:

Signal to noise ratio is poor at 5 watts, likely due to that power supply noise. But there is so much power that when you push it, the ratio is not bad: 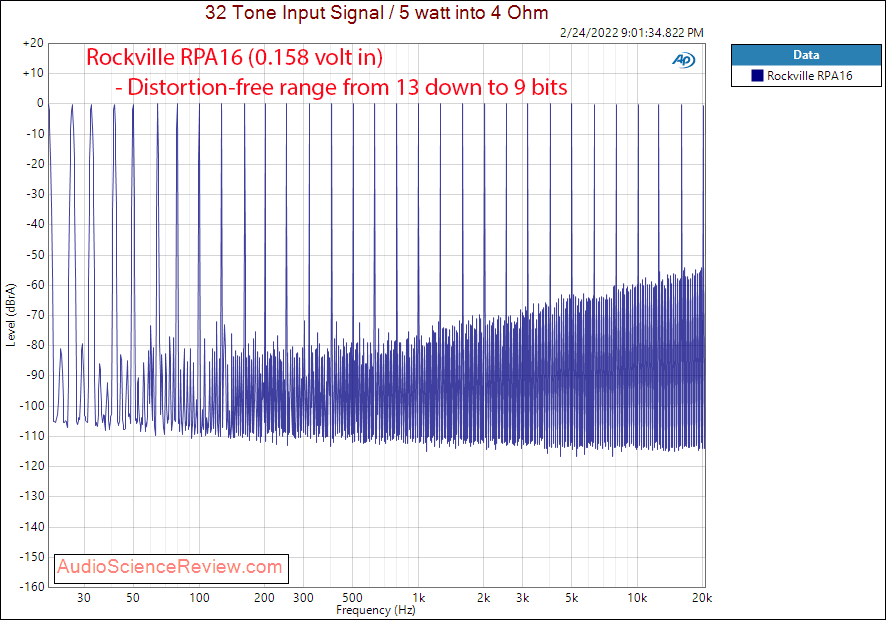 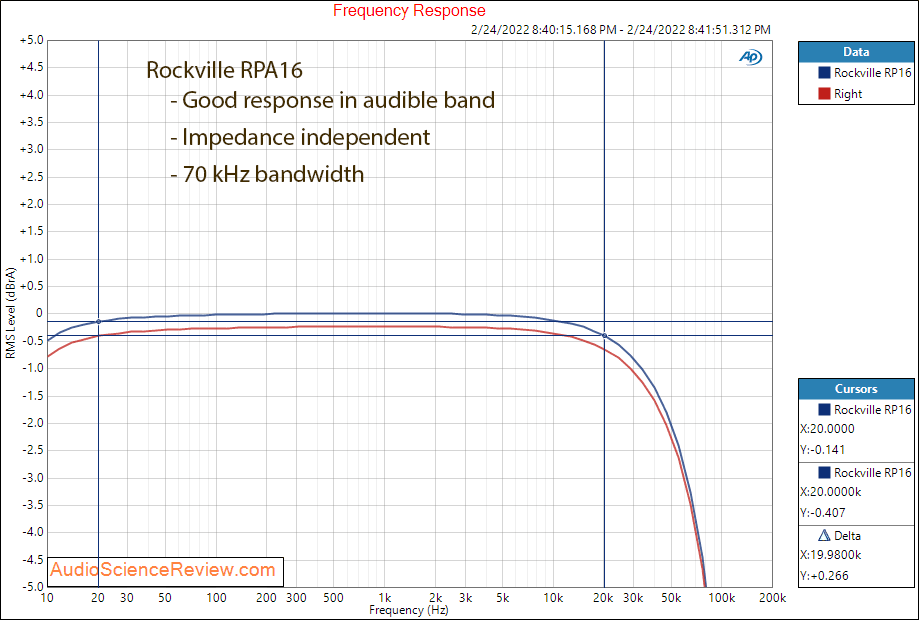 You have a choice of two roll offs for sub output. Strangely both boost the gain as well: 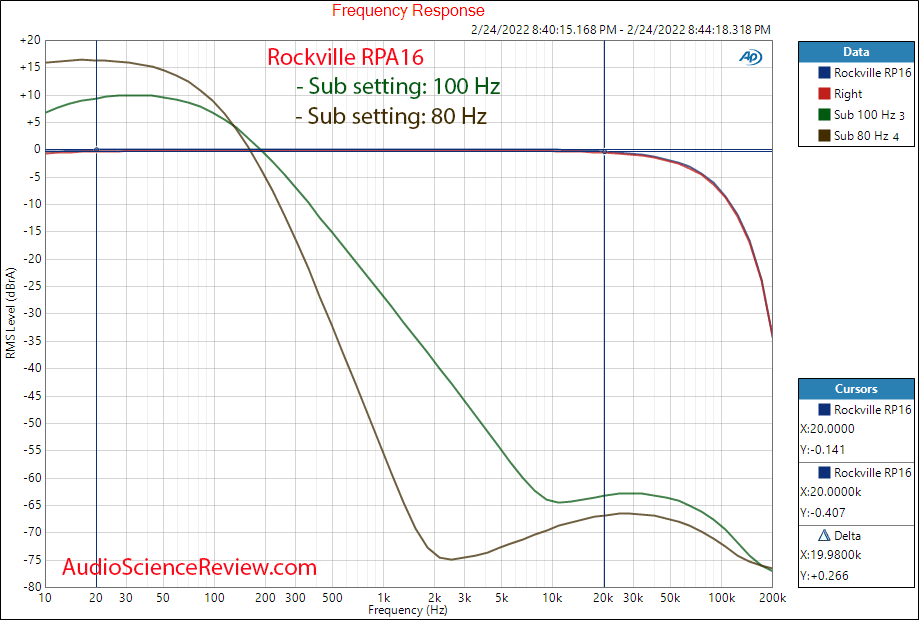 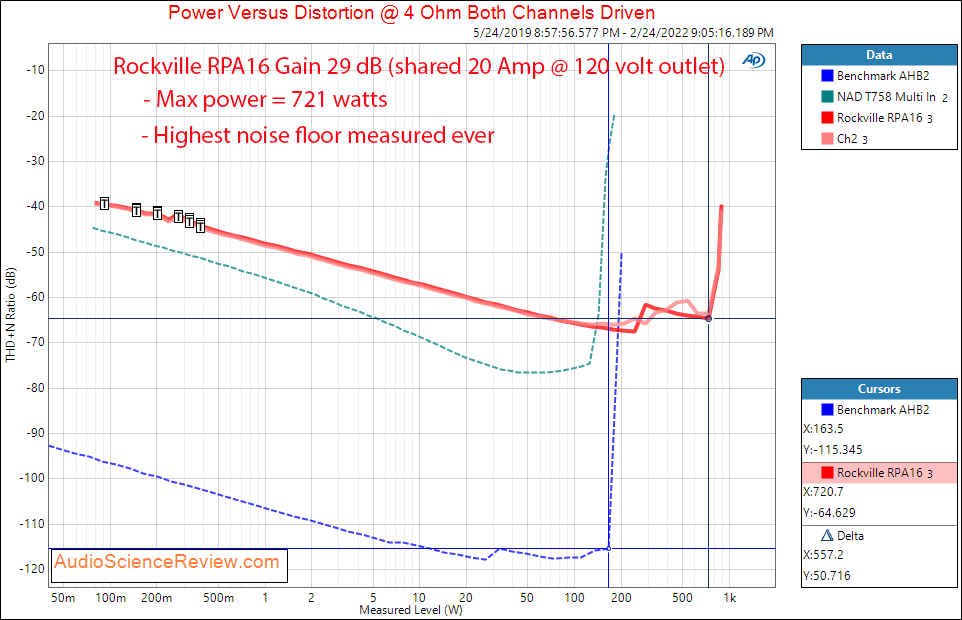 Naturally we don't get there but this is one powerful amplifier, generating nearly 1500 watts with both channels combined.

Letting distortion go up and with shorter term signal we get even more of it:

I don't think we have measured this much power before, have we?

Even at 8 ohm you have a ton of power: 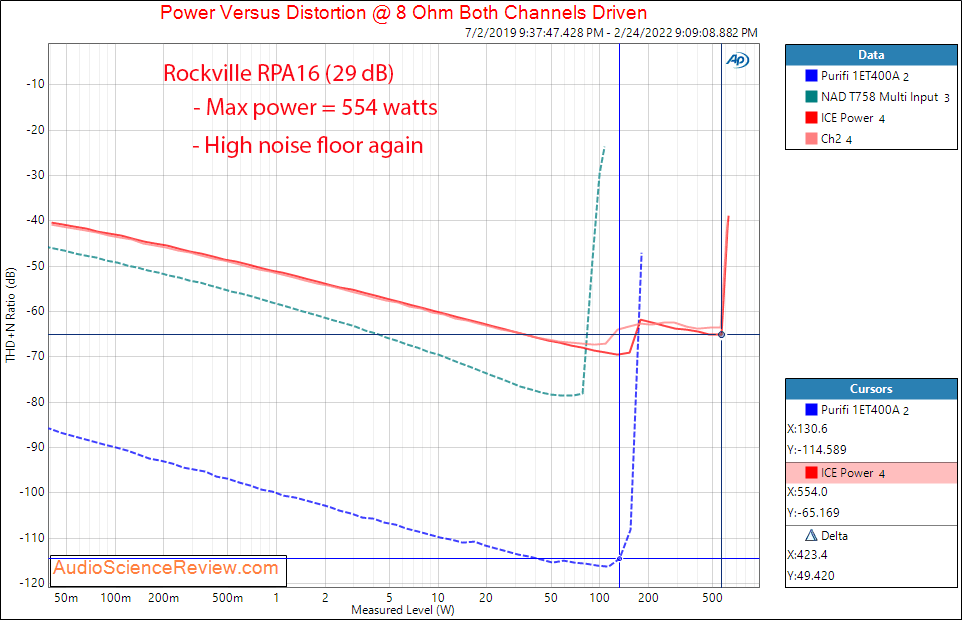 As noted though, noise floor is high, again, I think the worst measured. Distortion actually doesn't set in until 100+ watts.

Checking for frequency vs power and distortion we see orderly response: 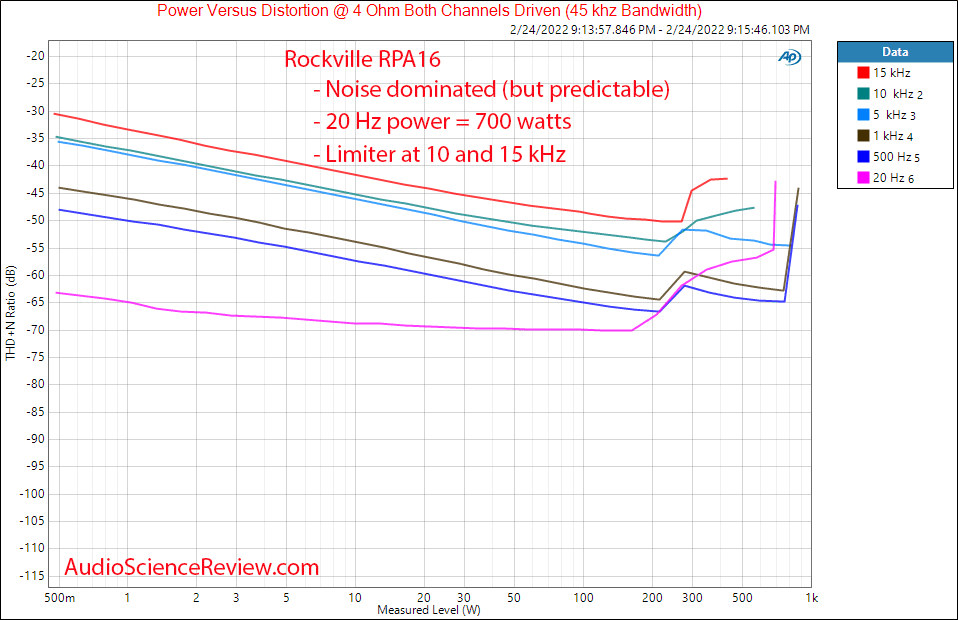 If you are using it for sub, you want to use the above number, rather than the 1 kHz power tests shown earlier. Fortunately this is still a ton of power considering dual channels are driven.

Finally, I ran a wideband spectrum test to confirm the design is not switching: 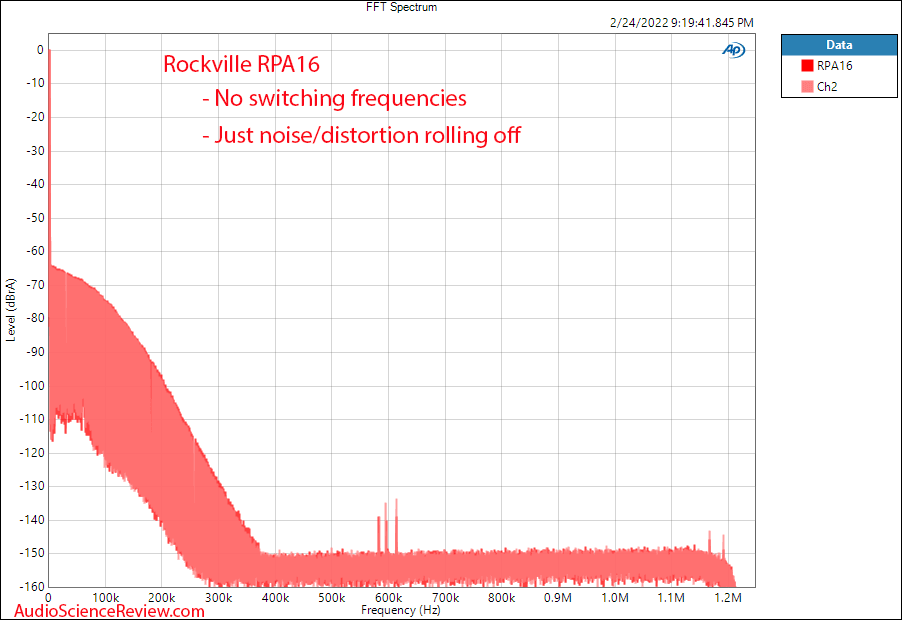 And it is not. There is also good filtering to push the noise levels down so low above a few hundred kilohertz.

Conclusions
This is an interesting take on a pro amplifier to go with non-switching design. This makes the amp extremely heavy compared to competition yet, the price is maintained and absurdly low. Copious amount of power is available if you can tolerate some fan noise.

Due to high level of noise I can't recommend the Rockville RPA16. But you are welcome to choose otherwise based on other factors.

Acceptable or preferred to be used with passive subwoofer?

I wouldn't use it as a HiFi amp, but as a stage amp it's probably just fine.
"The gullibility of audiophiles is what astonishes me the most, even after all these years. How is it possible, how did it ever happen, that they trust fairy-tale purveyors and mystic gurus more than reliable sources of scientific information? "Peter Aczel" Molon_Labe ! My Audio System

Perfect amp for a strip club. Lots of power for lotsa, lotsa bass oomph, and such an environment isn't low noise anyway.
R

Wow, that is a great amp for certain use cases.
$390?
Sticking with Crown for "pro meets hifi" but this inexpensive thing has a couple of watts to spare.
"The room response must be averaged to recognize trends in the summation of direct and reflected signals at the microphone. The resulting curves must not be taken as a 1:1 representation of what is heard as loudness at different frequencies. The room response gives a picture of the steady state SPL, where sound generation and sound dissipation in the room have reached their equilibrium." -Linkwitz

Rockville is the Harbor Freight of audio.
just like Pizza Hut is a restaurant.
.
Never give up

Thanks for the test Amir! That was interesting!


rammster said:
Acceptable or preferred to be used with passive subwoofer?
Click to expand...

Maybe, but how much do the fans sound?
Amir:
"The fan is variable speed and is mostly quiet at idle. But even under modest power it spools up as temps climb, making a slightly whining sound:"

Perfect as a party amp. Bring it out and use it at outdoor parties for example. Together with the party PA speakers.

Thats to much for a household outlet in Germany. Its 16A max.

As Weird Al sang to a Nirvana ditty: We're so loud and / incoherent / Boy, this oughta / bug your parents

Any serious speaker suggestions? Some big Realistic models from the 70s?
M

amirm said:
I don't think we have measured this much power before, have we?
Click to expand...

This is a review and detailed measurements of the Hypex NC2K based amplifier from Apollon. The unit was kindly purchased new by a member and drop shipped to me for testing. The NC2K has different options and starts at 1.990,00€ or US $2,342 as of this writing. The version I have has the...

With no CE mark and fixed (labelled) 120VAC they do not plan to export it to EU either.
Designer of Silver 5L
BSc, MSc (EE, Imperial College, London), MA (acoustics, Surrey University, UK)
Equipment list on About

How loud is loud, how to measure it? Is THX calibration bad for your health?
What smartphone OS do you use for the purpose of photography?
X

This is a review and detailed measurements of the Hypex NC2K based amplifier from Apollon. The unit was kindly purchased new by a member and drop shipped to me for testing. The NC2K has different options and starts at 1.990,00€ or US $2,342 as of this writing. The version I have has the...

Its peak power is over 1kW more.
Click to expand...

But only into one channel. The peak power is still tested with both channels running here, I think.
J

A fun experiment would be to take the top cover off and loosen the bolt holding the toroidal transformer(looks like it uses one). Give it a slight rotation and see if the noise levels improve.

I have used that trick on several amps/devices and it can make a difference.

That is a lot of power per dollar. It certainly is keeping that promise. I am sure it suits the priorities of a lot of people and applications. I wouldn't use it in my home though.

Dzhaughn said:
As Weird Al sang to a Nirvana ditty: We're so loud and / incoherent / Boy, this oughta / bug your parents

Any serious speaker suggestions? Some big Realistic models from the 70s?
Click to expand...

Cerwin-Vega or Klipsch from the 80’s. Rock that frat house!

I can't keep up with the panthers; does this dancing (jogging?) panther mean suitable for use only when under the influence?
P

Bombadil said:
I can't keep up with the panthers; does this dancing (jogging?) panther mean suitable for use only when under the influence.
Click to expand...

I'd say it's definitely a panther with a lot of "energy".
T

Most of the subwoofer freq. range THD seems low enough and tons of power. Seems like this would make a killer sub amp for an extraordinarily low price.
S

Speaking of Crown, has anyone measured the K1 or K2?
You must log in or register to reply here.