This is a review and detailed measurements of NanoPi NEO2 tiny single board computer acting as an audio streamer. It was purchased and drop shipped to me by a kind member. It costs just US $19.99 although for some reason it is listed for $60 to $75 on Amazon.

The NanoPi NEO2 is one of the many variations of the Raspberry Pi single board computer. It gets its tiny size from elimination of the HDMI video output and some of the ports: 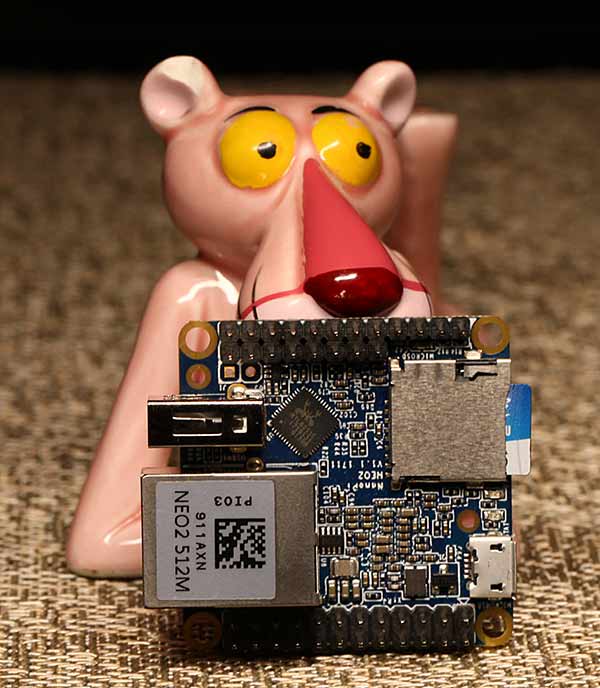 It is so tiny that I had to keep smacking the pink panther to keep it from eating it!

The low cost and small size is courtesy of Chinese implementations of ARM SoC (system on a chip) which you can see on the back: 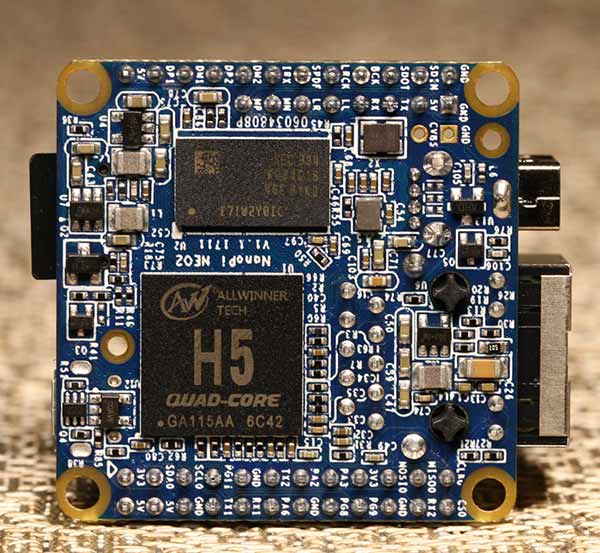 The "Allwinner H5" is the Soc sporting quad-core ARM processors. The NanoPi NEO2 has just enough peripherals for a "headless" (no display) audio streamer: gigabit ethernet port and one USB to connect to your DAC.

This is a blank slate: the board doesn't do anything by itself. You need to install software on it including the OS. I opted for "DietPi" Linux distribution because it supports the NEO2 and has a Roon Bridge install. The process of installing the OS and getting it online is complicated by the fact that there is no display to reconfigure the unit once it boots. So you better get everything setup beforehand on the image you are going to install on the microSD card.

I downloaded the DietPi image from their website. It installed and ran fine but I could not access the device because it defaults to 192.X.X.X IP addresses and my home network is 10.0.0.X. There is a config file to change that but it is only read once which threw me off. After some trial and error, and a bunch of cursing, I got dietpi to boot up and get on the network. I thought I was done only to realize that you need to first login to it using SSH after which it, it runs through insane amount of activity and updates. Many ugly messages and DOS-like menus are presented which you must access using the keyboard (use the tab key to jump to next option). It reminded me of computing back in late 1970s.

After 15 to 20 minutes, I thought I was done, only to realize that I had to now install Roon Bridge. Crawled through more ugly menus to select that and install it. Having no confidence at this point, I was pleasantly surprised to see the device show up in Roon list of servers. No only that, I could hot-plug a DAC and it would show up instantly as a new networked DAC in Roon's Audio settings.

If you don't have computer/networking experience, you should not attempt any of this. But if you are there, then the final outcome is worth it in that you get a tiny little streamer that in my testing almost worked flawlessly. The first time I connected it to my Topping DX3 Pro and played a file, I got some static during first five seconds of playback but could not replicate it after that. I streamed high bit rate files such as DSD256 (using DoP or DSP or PCM) and it all worked excellently.

What this means that for $20 and a bit of effort you can add network streaming to any DAC. A neat combination would be to include this with Khadas Tone Board. You would have a killer streaming DAC for just $120 plus case and power supply. While idling the NEO2 draws about 0.25 amps but peaked at nearly 500 milliamps. I connect it to my USB 2.0 port and it seemed to boot and run which is more than I can say for regular Pi boards.

Note that the Allwinner H5 runs pretty warm. The CPU utility clocked it at over 60 degree C during the OS update. While Audio use is much less taxing, I could barely touch the H5 during audio playback. I recommend getting a heatsink for it if you are going to put it in a box.

Streamer Audio Measurements
My ability to test audio streams is highly limited due to the fact that my analyzer software can't control them. But we can run enough tests to get confidence in the device performance starting with our Dashboard. I connected the Gustard DAC-X26 to NEO2 which is one of the best tested DACs to date. This is the Gustard first being driven by Windows/USB direct: 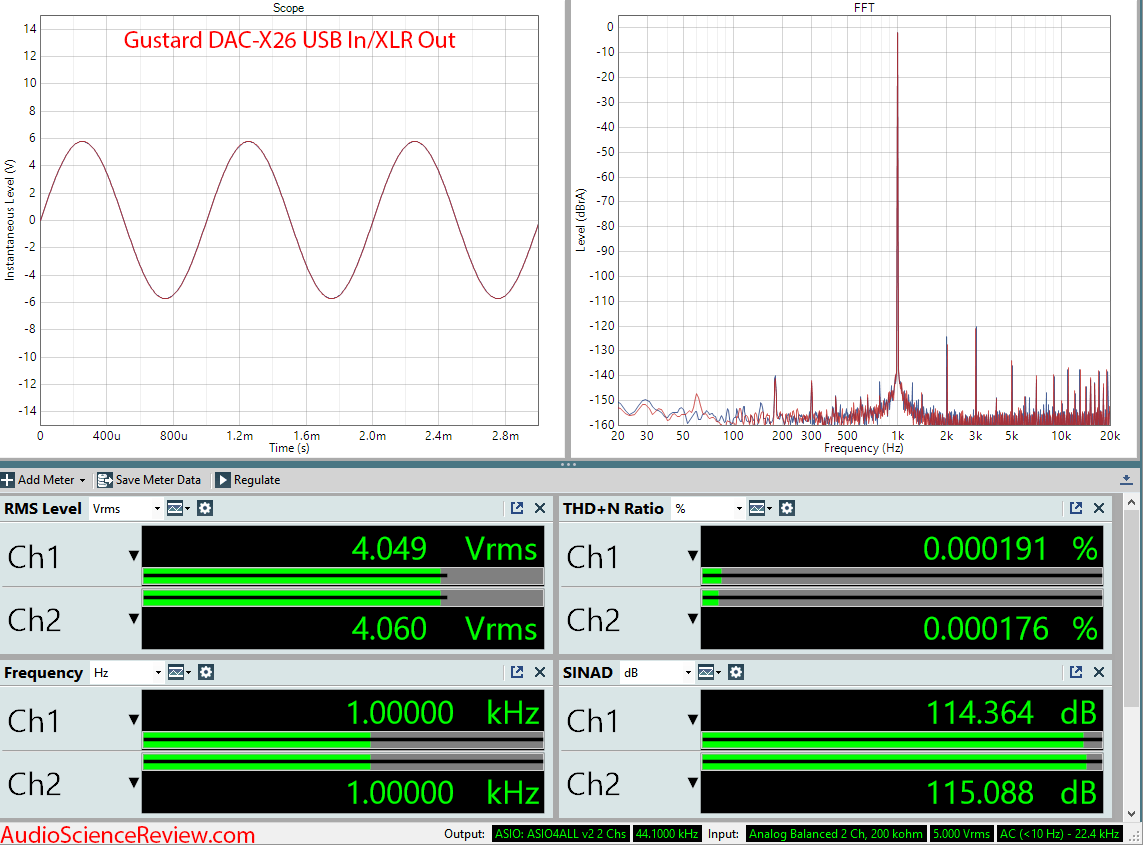 And here is Roon driving it: 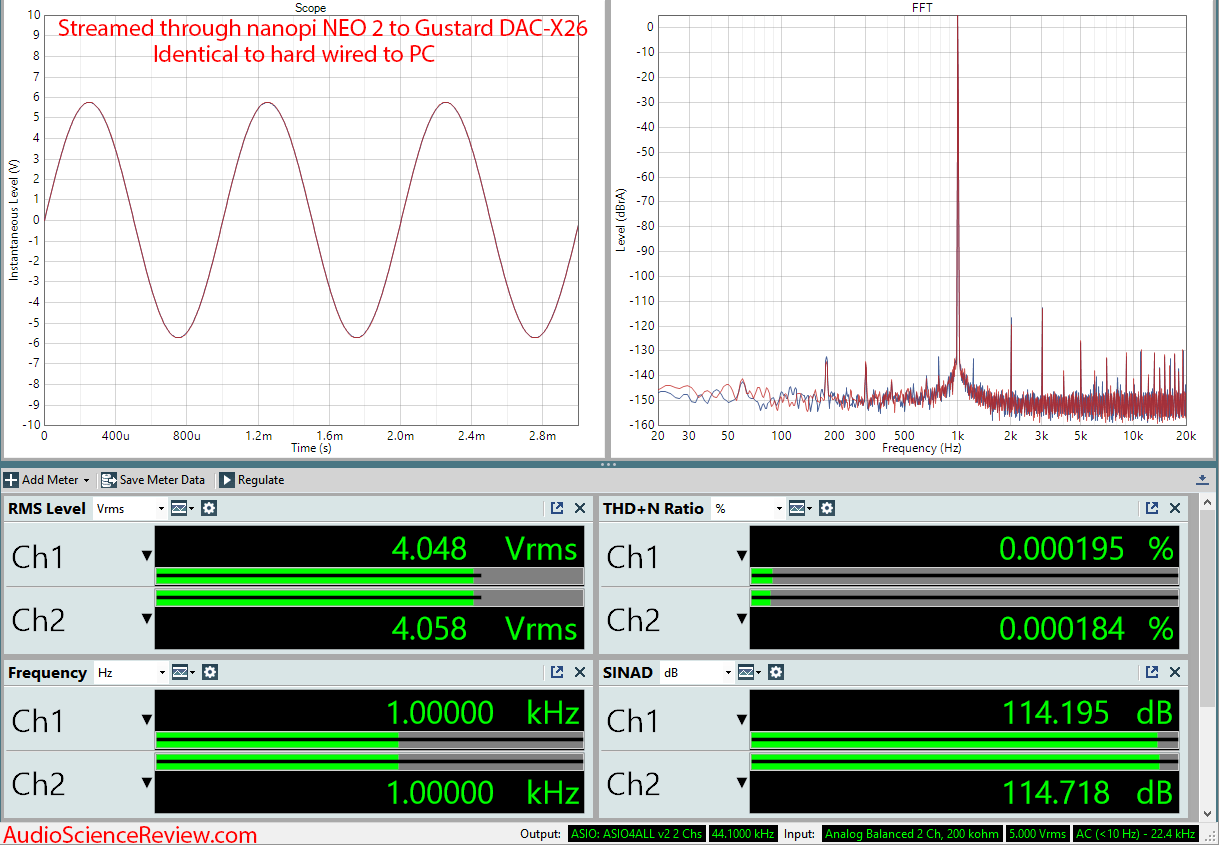 The tiny variations are just run to run error. We are getting identical performance down to -114 dB (well beyond our hearing dynamic range).

The next test was that of jitter: 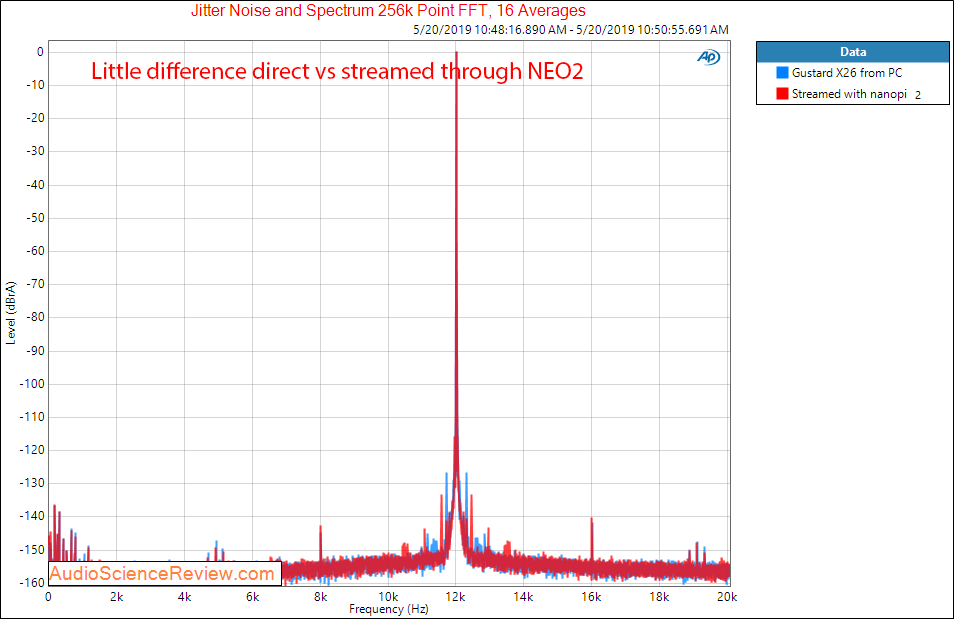 The noise floor of the DAC-X26 is very low so exposes very low level jitter/spurious tones. Worst case one being driven direct is at whopping -128 dB. With NEO2, it actually improved a bit to -134 dB (tones hugging our main 12 kHz signal).

Conclusions
The naonPi NEO2 is tiny little computer that can be turned into a turnkey audio streamer for US $20. The software installation process is ugly (which someone would make an image that is ready to go with Roon), but once past that hurdle, it works transparently with software such as Roon player. If you are a DIY person, this is a gift from heaven given the smaller form factor and lower power requirement.

The level of integration, cost and power consumption is beyond imagination just 10 years ago. What a great era we live in as far as technology.

I am happy to recommend the end result of using nanoPi NEO2 as an audio streamer. But not the installation process.

If you guys donated more money, my pink panthers would not be so hungry as to attempt to eat products under review! Please donate generously so that I can get them more Kobe Beef which is the only think they seem to want to eat these days (they have sensitive stomachs):

Sounds great. Do you know if it works with multichannel DACs? To be more precise - can you choose a 7.1 config in Roon?

Thanks Amir. Amazing performance and versatility. Just checking the site shows a WiFi version with A7 chip, which comes in for 29 dollars, including case.
https://www.friendlyarm.com/index.php?route=product/product&product_id=248
R

Thanks Amir... I use this kind of things since years. Never mind if it is not power off, the electric cost is marginal. BTW I use cheaper cards from Orange Pi with H2+ or H3 ARM processor: lower consumption and temp. There is more than 1000 cards "SBC" for single board computer on the market...

It is interesting to see an article on the subject on this website, maybe some people will try. Anyway, with a NAS somewhere it is possible to have an excellent "player" for ultra-low cost.

Olli said:
Sounds great. Do you know if it works with multichannel DACs? To be more precise - can you choose a 7.1 config in Roon?
Click to expand...
I have to find a multichannel DAC to test with. The bulk of what I have is stereo DACs.
Amir
Founder, Audio Science Review
Founder, Madrona Digital
Contributing Editor, Widescreen Review Magazine
Click for My Technical Background
Master List of Audio Reviews
N

heh, i got a NEO2 kit to use as a wifi analyzer late last year (had to add my own wifi adapter).

the kit includes the NEO2, a tiny aluminum case with thermal pad (wish the KTB guys could offer something like this), a tiny HAT OLED display (three input buttons) ram, hardware, tool, usb cable. i bought direct from friendlyarm.com and got the 1gb kit...with china post shipping, it was delivered for $54.

What a great era we live in as far as technology.

nuxv said:
heh, i got a NEO2 kit to use as a wifi analyzer late last year (had to add my own wifi adapter).
Click to expand...
Oh those tiny little micro pi computers are so damn cute!

Amir's (pink) cat coughed up a Pi-ball!
Don
"After silence, that which best expresses the inexpressible, is music" - Aldous Huxley
D

Will piCorePlayer run on this? Googling, but haven't hit an answer yet...

There is no display on this so no sense in running any player on it.
Amir
Founder, Audio Science Review
Founder, Madrona Digital
Contributing Editor, Widescreen Review Magazine
Click for My Technical Background
Master List of Audio Reviews
D

piCorePlayer can run a touch display if you install JiveLite, but JiveLite is not installed by default. I run both my RPi/piCorePlayer systems headless.
S

Daverz said:
Will piCorePlayer run on this? Googling, but haven't hit an answer yet...
Click to expand...
You'd need to modify PiCorePlayer to get it to boot. Despite the name the NanoPi boards aren't compatible with the RaspberryPi as the Broadcom and Allwinner chips have significant differences. This thread should give you some pointers if you want to try it.

vkvedam said:
Amir, thinking of getting one to use with D50, would it work?
Click to expand...
Yes.
Hey, check my blog!

It's also got spdif on one of the pins, and i2s, but these will be more work to get working than the USB. I'd be interested to know if it has the same usb glitch issues that the RaspberryPi has when using BruteFIR.
B

Buildroot is a very good choice (instead of piCore) if you want a minimalist Linux just for audio.
I use it on NanoPi NEO and NEO2. Here are my config files for building system images: https://github.com/bz31/NanoPi_NEO-NEO2_Buildroot
And the zipped OS images to download: https://github.com/bz31/NanoPi_NEO-NEO2_Buildroot/wiki
R

Daverz said:
Will piCorePlayer run on this? Googling, but haven't hit an answer yet...
Click to expand...
I've understood PiCore Player is only for Raspberry Pi.

It's possible to install Squezelite (the audio player) on H3 ARM processors (did not test H5) and even Jivelite, to have a screen.

I use PicorePlayer with plenty of Rasp at home. I print the frame for the official LCD, the Rasp is behind, on the back. I use SPDIF output. 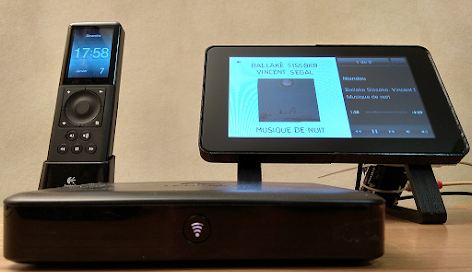 For the bedroom I have this nice little cardboard box:


In the kitchen we have a FrankeinBox:

The LMS server is installed on an Orange Pi One, faster than a Pi...

To manage the players with on Android smartphone I use on Android an app names "Squeezer".


Ok ok, I stop here, I build plenty of things with Arduino and SBC...

Cost is very low and it's possible to build cool things, and most important, learn!.

amirm said:
I have to find a multichannel DAC to test with. The bulk of what I have is stereo DACs.
Click to expand...
It would be really great if you could find out. From what I have seen so far, there is no cheap streaming Roon endpoint available - the cheapest one I could find (And I am using) is the Sonore MicroRendu. I've also tried CCA - again no MCH support, neither with a regular Rasberry Pi running Diet Pi.
You must log in or register to reply here.
Share: Facebook Google+ Reddit Pinterest Tumblr WhatsApp Email Link