This is a review, detailed measurements and comparison of Apple's USB-C adapter to the current and last version of Google Pixel headphone adapters. The Apple adapter costs just $9 including one day shipping for free. The Google dongle costs $12.

Not that any of these are large by any stretch but Apple's is also the smallest of the three: 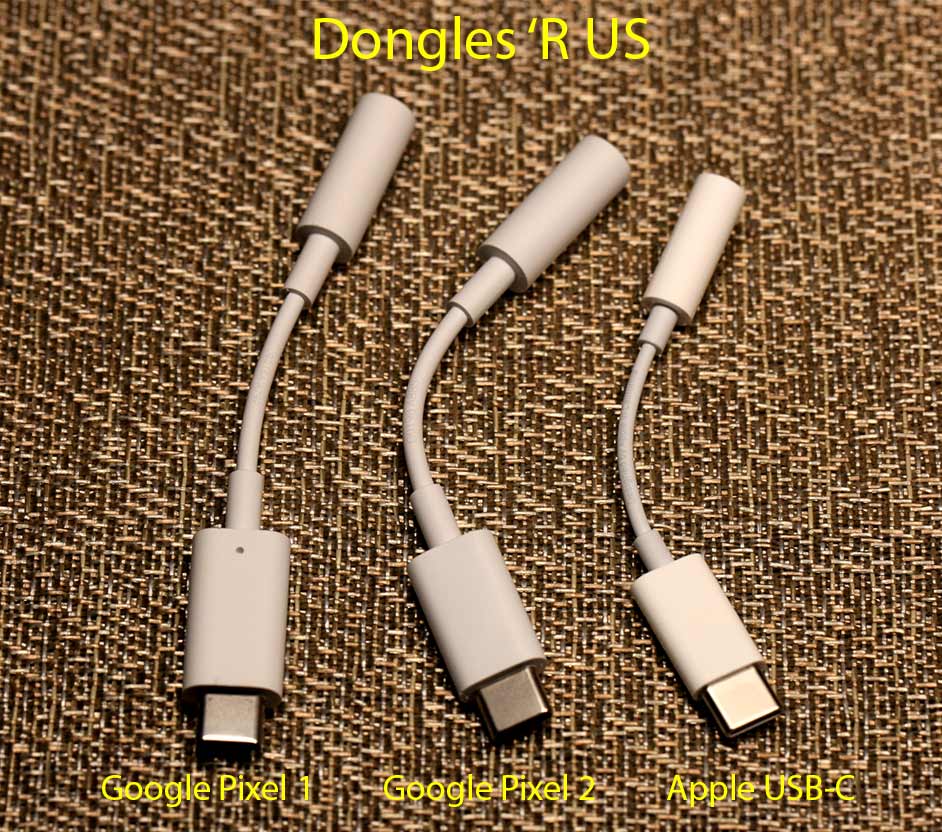 Oddly there is no apple logo or markings on the device. The others don't have it either but I thought Apple would insist on that.

All three adapters work in Windows with the appropriate adapter and that is how I tested them, allowing my analyzer to fully control and quantify their performance. 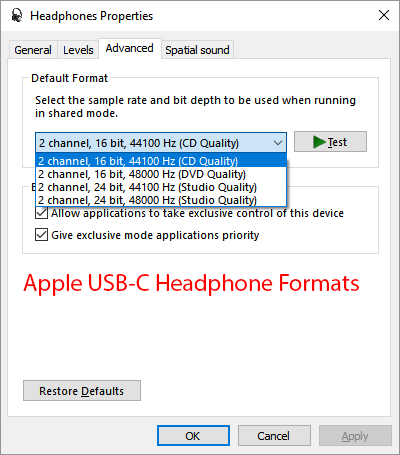 So very similar to Google Pixel V2 and better than V1 which only supported 48 kHz.

Note that volume control in Windows is active at all times even if you use WASAPI exclusive mode!

Not much else to talk about than getting into measurements.

Measurements
As always, let's start with our dashboard view at maximum volume: 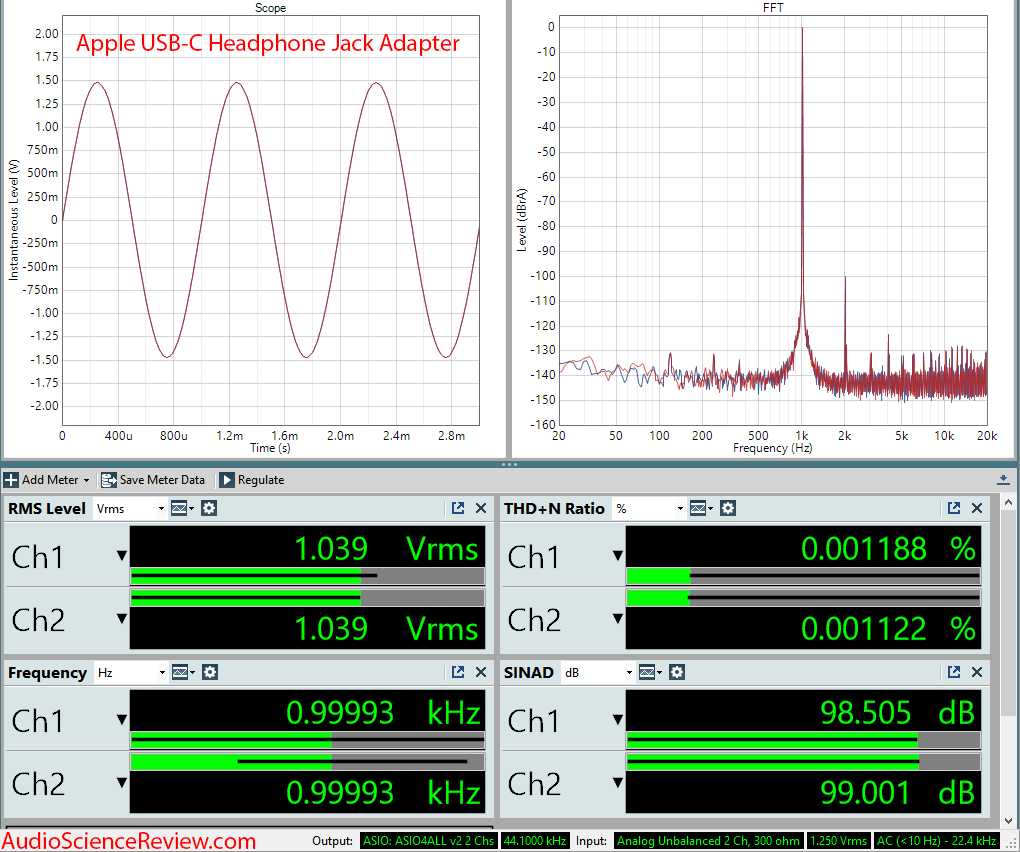 Oh wow! That is good. Very good for a dongle. Here is how the SINAD compares: 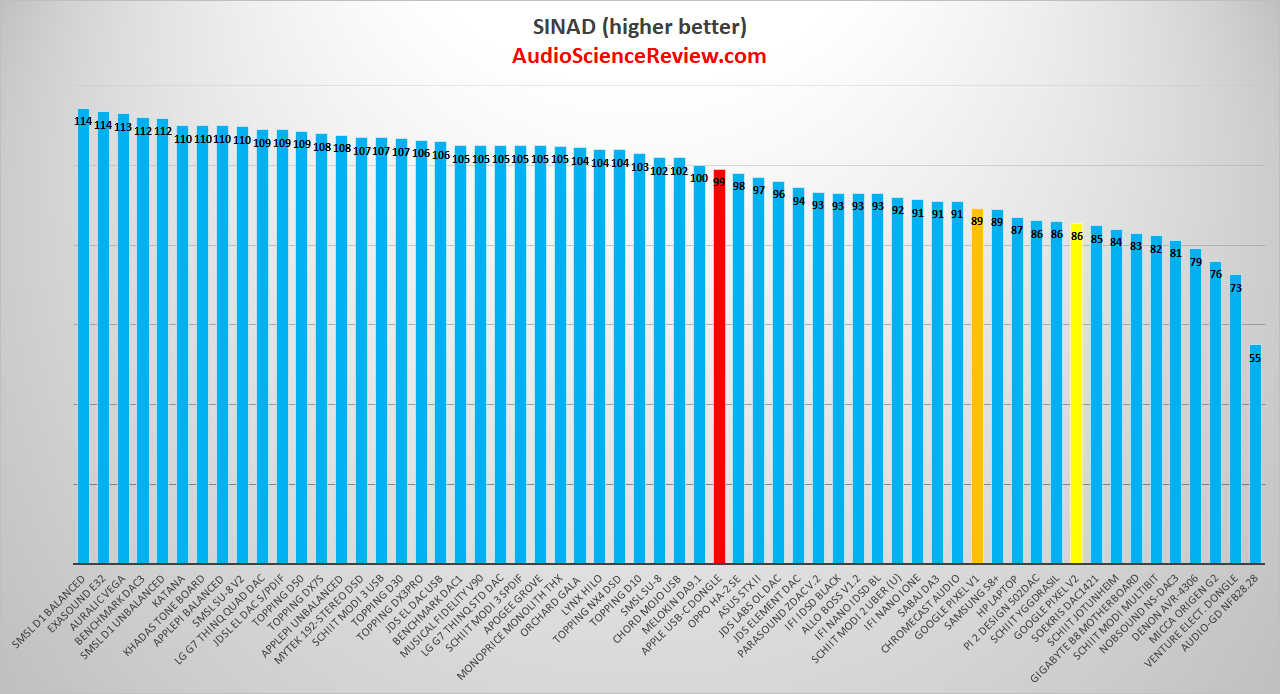 As you see, it leaves both Google dongles in the dust. Mind you, built-in DAC in LG G7 ThinQ is much better still so Android fans don't need to kill themselves. Clearly someone cared about audio performance here in design of Apple dongle. 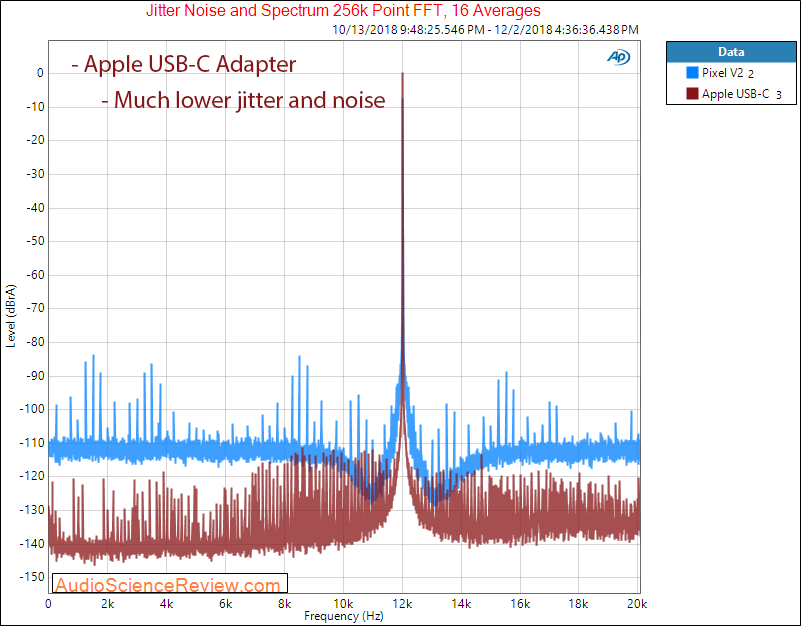 Seeing how this is a semi-serious DAC performance, I thought I run some adult tests on it like Linearity:

Most excellent again for something that is tinier than your fingernails! 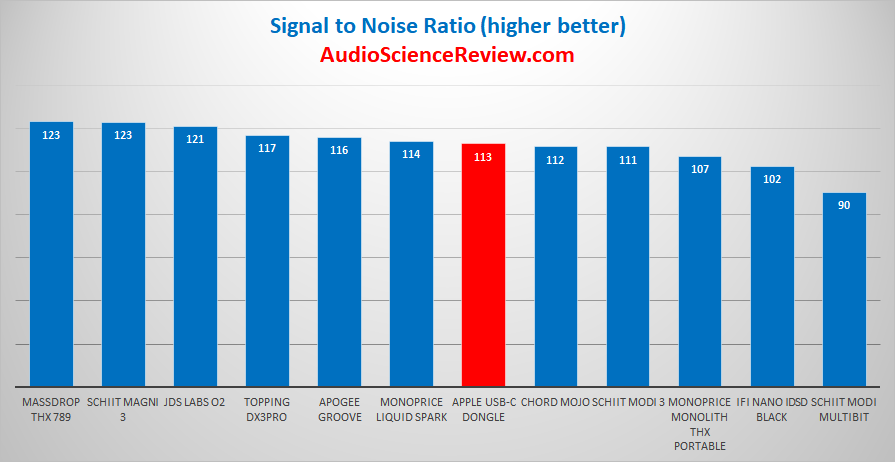 The most important metric for these is how much power they have. There was some criticism of my Google Pixel measurements so I decided to remeasure them and refine the graphs and setting. While Google Pixel V2 repeated its past performance, the V1 produced less power. I don't know what is up with that. But here is the data anyway: 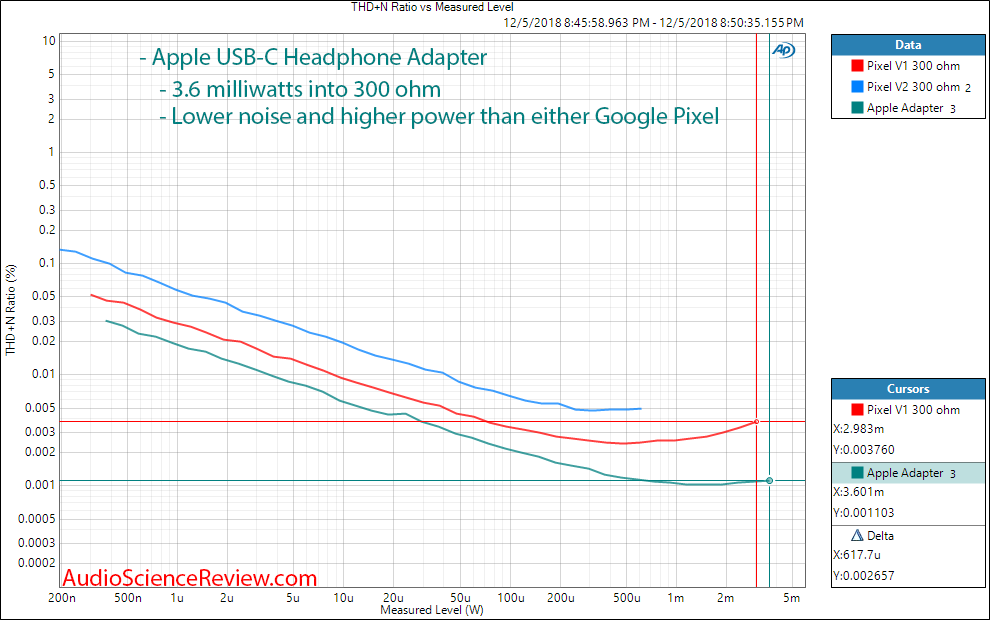 The Apple USB-C headphone dongle betters both in noise. It then proceeds to produce much more power than Google Pixel V2 and a bit more than V1.

Here are the results for much more stressful 33 ohm load: 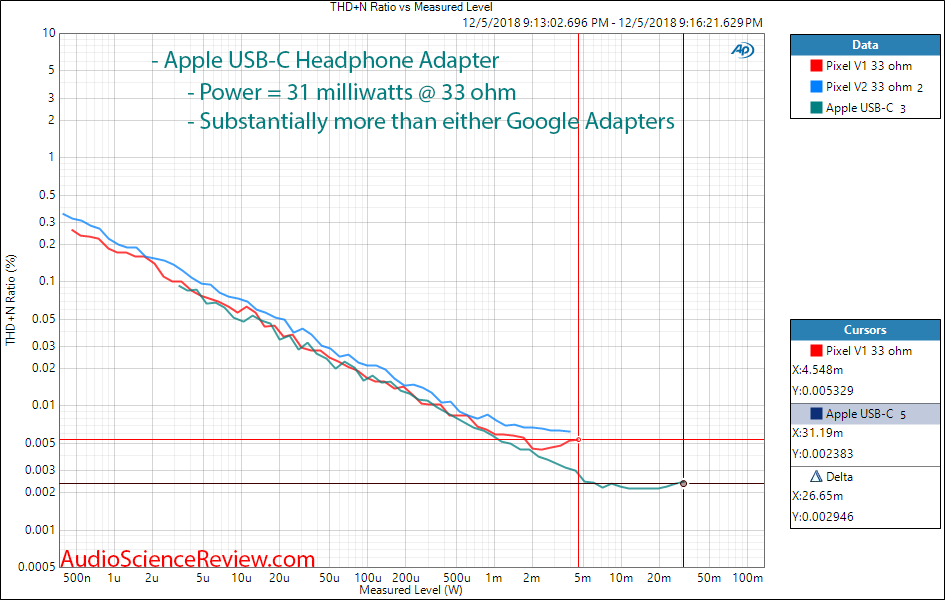 Here the noise performance is similar but the Apple Dongle has a commanding lead over both Google dongles with respect to power.

Putting these in a graph we get this (sorted by 300 ohm power): 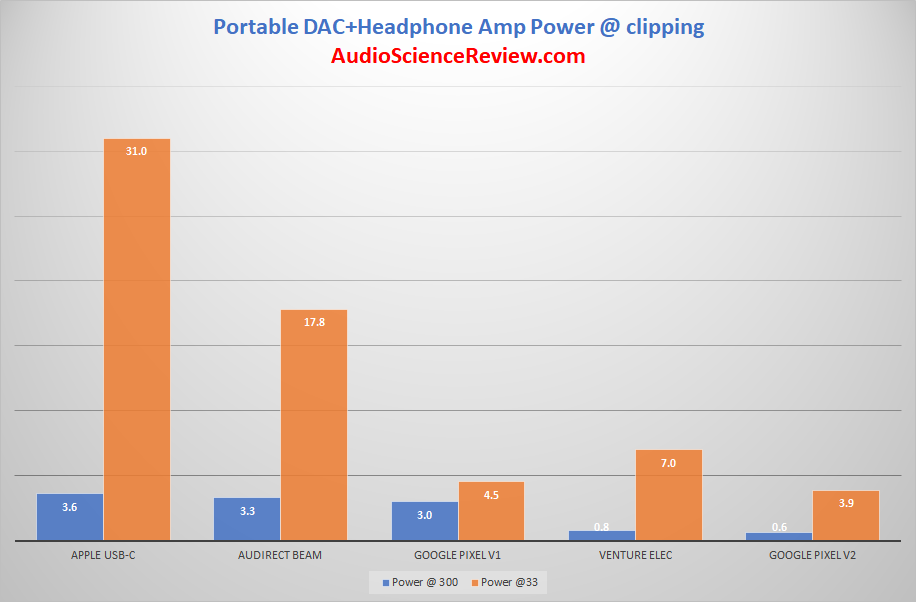 As we see, the Apple USB-C adapter even beats the small thumb drive sized Audirect Beam!

At 0.9 ohm, the Apple USB-C dongle has near ideal output impedance whereas Google V2 is far higher at 7.6 ohm.

Listening Tests
I started my listening tests with my AKG K92 headphones. Here, there was ample power with excellent fidelity when using the Apple headphone adapter. Hard to imagine this much oomph coming out of such a tiny thing. The extra power was very audible as compared to Google V1 and V2. I am listening to the Apple dongle as I am typing this, having to keep the Windows volume control at just 18 out of 100 on my headphone electronic music.

Switching to high-impedance 300 ohm Sennheiser HD-650 nearly killed performance. The sound was OK but bass is week and dynamic range just not there. Here my reference is more powerful desktop and battery operated portables.

Finally I tested the Hifiman HE-400i. This wasn't nearly as loud and dynamic as AKG K92 but still quite good!

Bottom line: if you have a lower impedance headphone or an efficient one, there is no reason to apologize for using the Apple headphone adapter.

Conclusions
It is time for us Android users to crawl under a rock. Apple showed us that a bit more thought and engineering put in a dirt cheap and small audio product can produce respectable performance. The objective performance gap with Google dongles especially with their regression to version 2 is vast. This is both on objective front and subjective listening tests.

Note that my testing is all on Windows. I attempted to test on my Samsung S8+ and got odd results. Using both Google dongles, all they did was route the not so good sound of the internal DAC through the dongle (???). With Apple dongle I got music but level was very low. So if you plan to use the Apple dongle on an Android phone, you should do some compatibility testing.

FYI I have two other dongles to test in the future. For now, I can recommend the Apple USB-C headphone adapter. For many people it may replace the portable thumb drive dac+amps.

Now please forgive me as I go drown out my sorrows as an ex-Microsoft guy having to recommend an Apple product....

Good to see the Apple dongle works on Windows, since it doesn't seem to work properly on Android phones I expected the worst

Very laudable performance for such a tiny thing!

amirm said:
The Apple adapter costs just $9 including one day shipping for free
Click to expand...

What other toys do you sell at Dongles 'R US?

amirm said:
Now please forgive me as I go drown out my sorrows as an ex-Microsoft guy having to recommend an Apple product....
Click to expand...

He had to didn't he
K

This really has me wondering how various iPods hold up.

So who's gonna hack one of these things and turn it into a giant killing USB D/A converter just for fun??
Ricky Roma: I subscribe to the law of contrary public opinion... If everyone thinks one thing, then I say, bet the other way...

restorer-john said:
So who's gonna hack one of these things and turn it into a giant killing USB D/A converter just for fun??
Click to expand...

Maybe you could, just for the fun of it

plancktheplank said:
What other toys do you sell at Dongles 'R US?
Click to expand...


amirm said:
*snip*…jumper cable, I have three versions I am offering for sale:
1. The yellow one you see in the picture. You can buy them for 10 cents on ebay but because I will be selling them, the price is $10.

2. A 99% oxygen-free cable with hand forged alligator clips. I will be offering these for $399.

3. The ultimate version made out of free-radical-free insulation, cryogenically treated, electron aligned conductors. It is built by nude virgins on a remote island so it does not come cheap. For ASR members, I am offering this at a special price of $9999. …*snip*
Click to expand...

This review further confirms the idea I tried to convey to users here a lot of times in the past --- laptop / phones / dongles today are so good that you don't even need a DAC/amp. This is especially true if you're using Apple's products (iPhone, Macbook Pro). In measurements those $1000 DACs may perform better, but your ear is not good enough to tell the difference in a blind test.

Cool to see this kind of performance in such a small form factor.

Have you tried it on Android with an different app? I have no experience myself, but I hear the USB Audio Player Pro, is excellent for using external DAC's.
V

Good question, and I would agree about USB Audio Player Pro. It is solid and detects DACs flawlessly. I'm not clear what those dongles are supposed to do, is there a chip inside? Would USB Audio Player Pro detect them as a DAC? Audio is supposed to be better over USB but how much better? Would there be a significant benefit over the 3.5 mm jack output? I do think the DAC in my Sony Xperia phone is decent, good enough in fact that I'm not using my Dragonfly Black much anymore, as my typical headphones don't need a lot of power.

yue said:
If amir is interested I can send my 2004 iPod over.

In general iPod is very noisy — the hard disk spins quite often and is very annoying. they measures super well among products of its era (I have measurements but I am not going to post it) but I am not a fan of it. In the end it is technology of more than a decade ago.
Click to expand...

Maybe he can test a Zune from the same era, if he can find one. 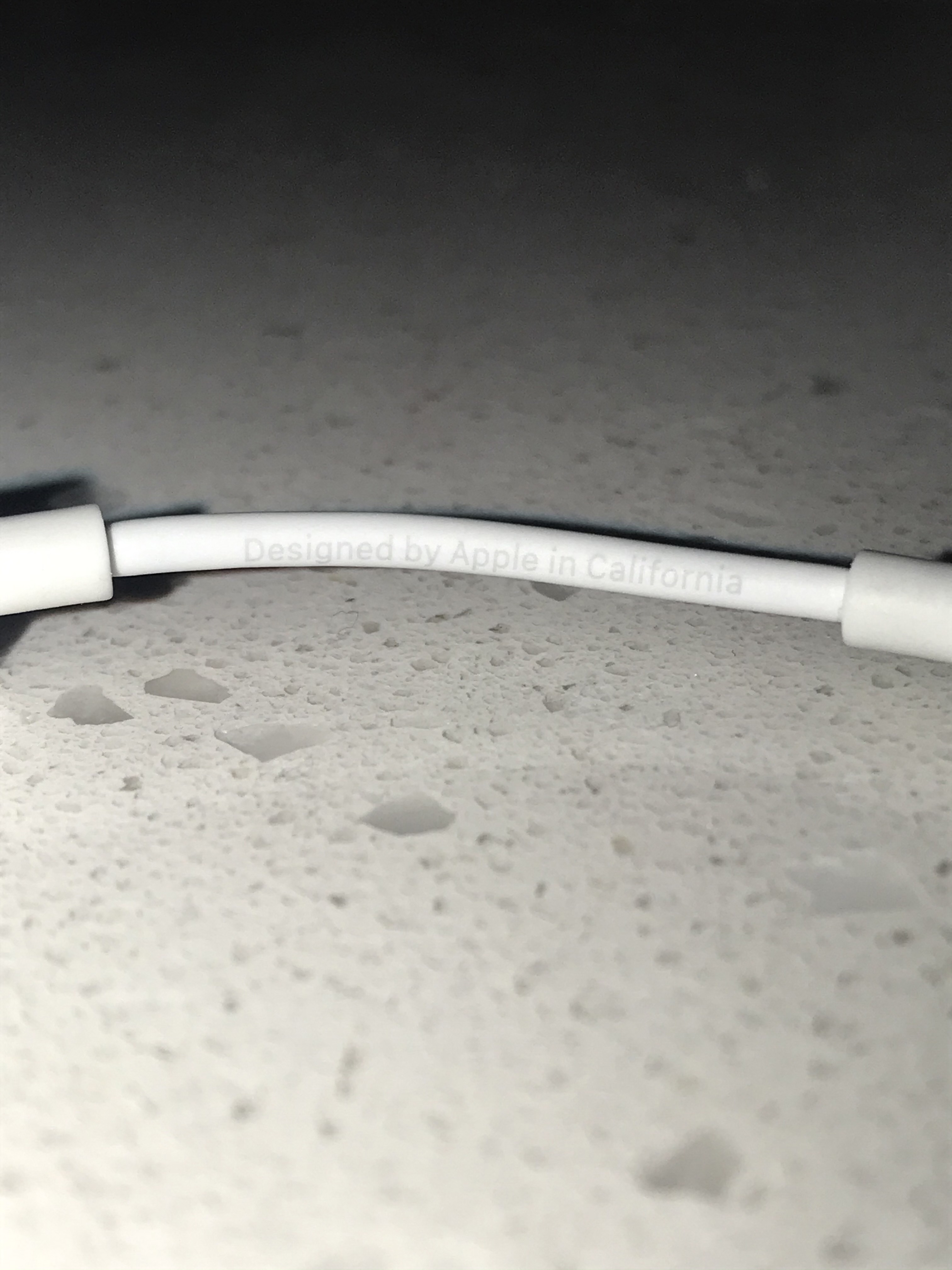 Did you need to illuminate it with UV or use some special polarizing sunglasses to see it?
Ricky Roma: I subscribe to the law of contrary public opinion... If everyone thinks one thing, then I say, bet the other way...

restorer-john said:
Did you need to illuminate it with UV or use some special polarizing sunglasses to see it?
Click to expand...

jaynyc said:
It might be interesting to compare both of Apple’s $9 dongles.... this review is USB-C to 3.5mm (from a Windows PC), there’s also Lightning to 3.5mm (from a recent iPhone)
Click to expand...

B
DACs that have data+power over USB-C to devices e.g. iPad

Cheapest DAC with USB input (and maybe volume control VIA a remote) worth buying?