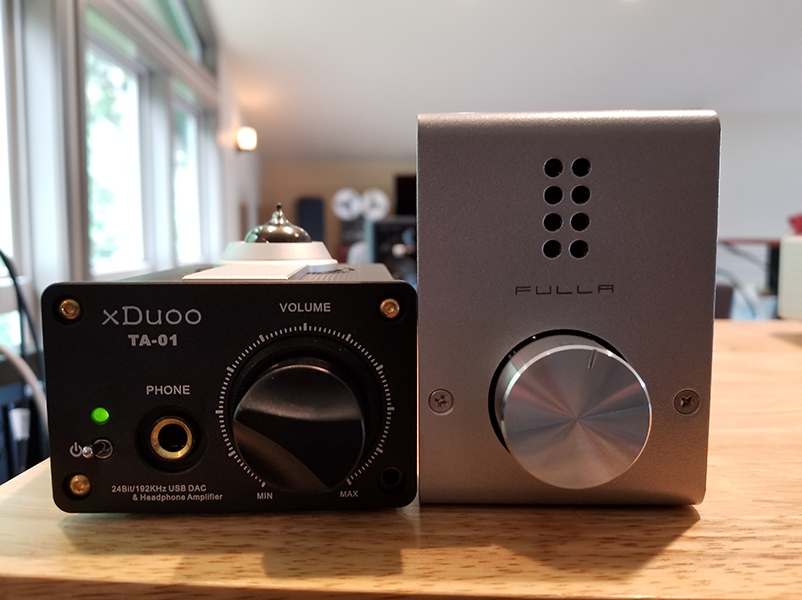 The XDuoo TA-01 retails for USD $160 on Amazon including Prime shipping. The Schiit Fulla is $99 from Schiit direct (not sold elsewhere) and you have to add shipping to it. So prices are not identical but close.

The XDuoo as you see in the above picture, resembles an aircraft instrument or something. It definitely has nice design cues. The volume is hefty and feels nice with that big knob. Toggle switch and power indicators are nicely in the front. It comes with an external switching power supply. It can act as both a DAC+headphone amp combo or with analog input, as just a headphone amp.

The Schiit Fulla design language is similar to other Schiit products. I find their style too plain and industrial but in this instance, I think there is some cuteness with that large knob. The knob itself feels plasticy and not as weight as XDuoo. But not too bad. What is bad though is all the awful little markings substituting for actual labels. Funny that a Chinese company puts nice labels on their product in English but an American company chooses to use symbols! Everyone in the world understands the few English words used in Audio so please use them Schiit. No reason for scratching one's head wondering what a 3.5 mm socket is output or input. With no less than three of them on the Schiit Fulla, it can and does make my grumpy!

On the plus side, the Schiit functionality and robust enclosure seems like good value at $99.

Both DACs were plug-and-play under Windows 10 Creators Edition which was nice. I used Roon media player for DAC/USB related tests, and the line in for pre-amp testing.

Let's get into measurements and see how they did. As usual, if you are not familiar with what these graphs are, refer to my tutorial on understanding audio measurements: https://www.audiosciencereview.com/forum/index.php?threads/understanding-audio-measurements.2351/

Measurements
Let's start with a simple test of frequency response. This is performed using the analog input. First up is the XDuoo TA-01: 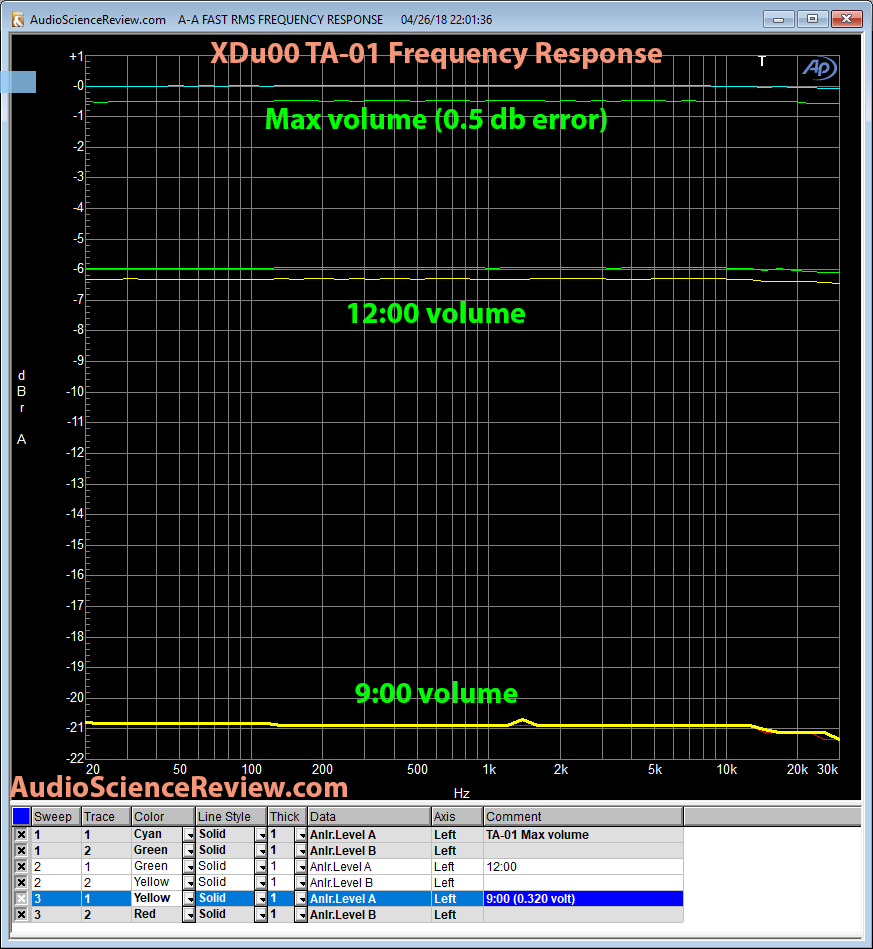 Overall frequency response is fine. But oddly channel imbalance is bad at full volume but gets better at lower volumes! Since most of us will listen at lower than max volume anyway, this is a good thing I guess. But better would be full matching regardless of level.

This is how the Schiit Fulla V2 does: 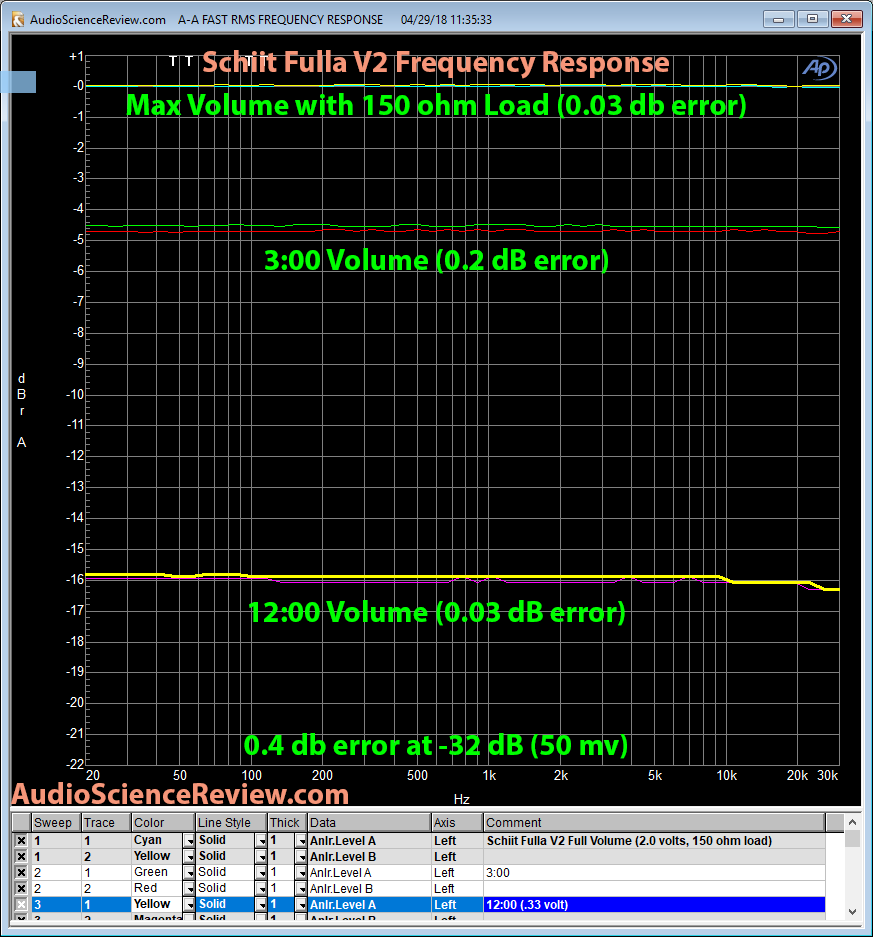 Matching here is pretty good and only deviates at very low volumes.

Let's examine the DAC portion and see how they do on jitter and noise: 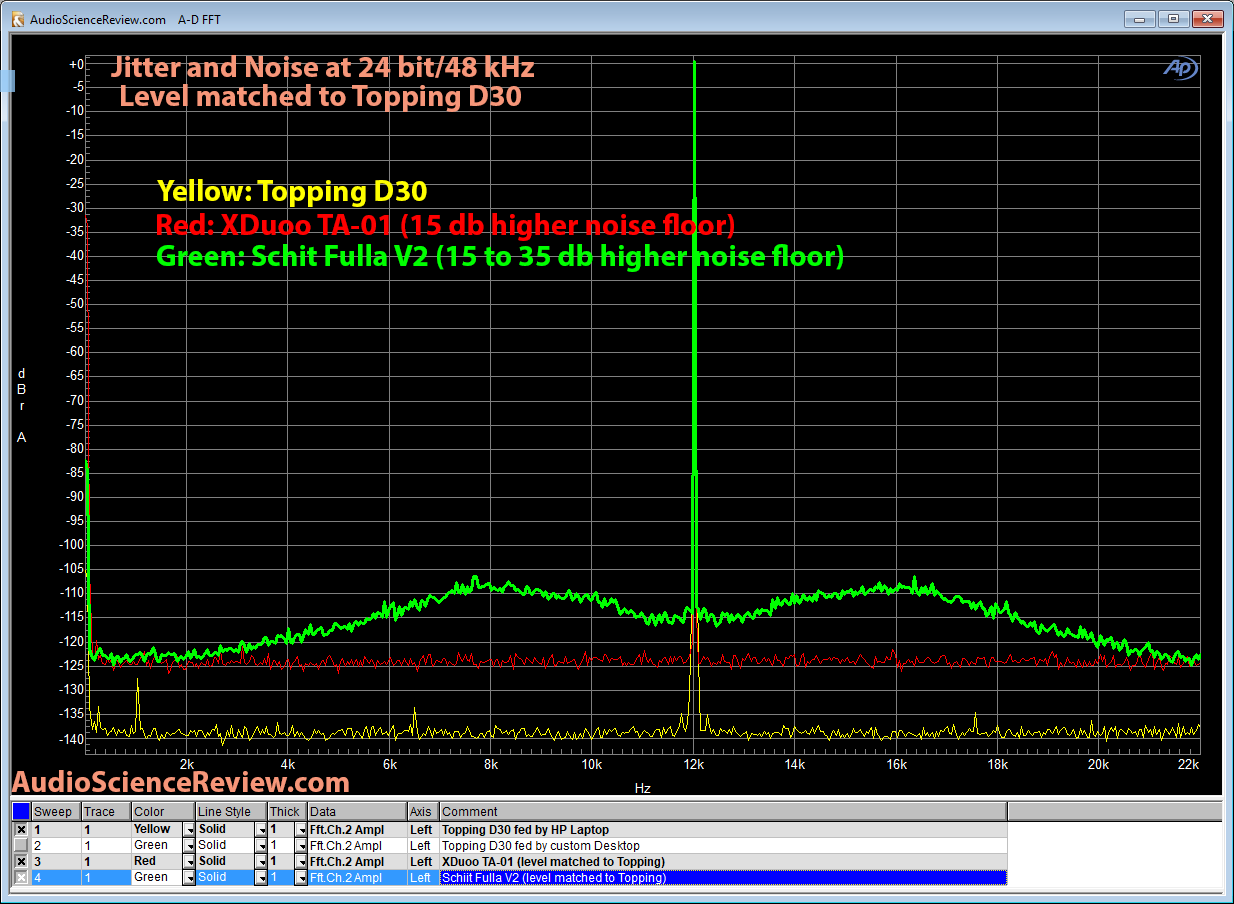 We see substantially higher noise floor than our reference Topping D30. I kind of expected this from the XDuoo but seeing how the Schiit Fulla V2 lose to it on noise is surprising. OK, maybe not surprising given how Schiit products have done on my bench but still, a solid-state device should do better than a tube on noise.

How is linearity? Let's look:

They are essentially neck and neck until about 15-16 bits. After that, the Schiit deviates more radically although neither is very good at the extreme.

Let's see how they do with a very low amplitude -90 dB sine wave: 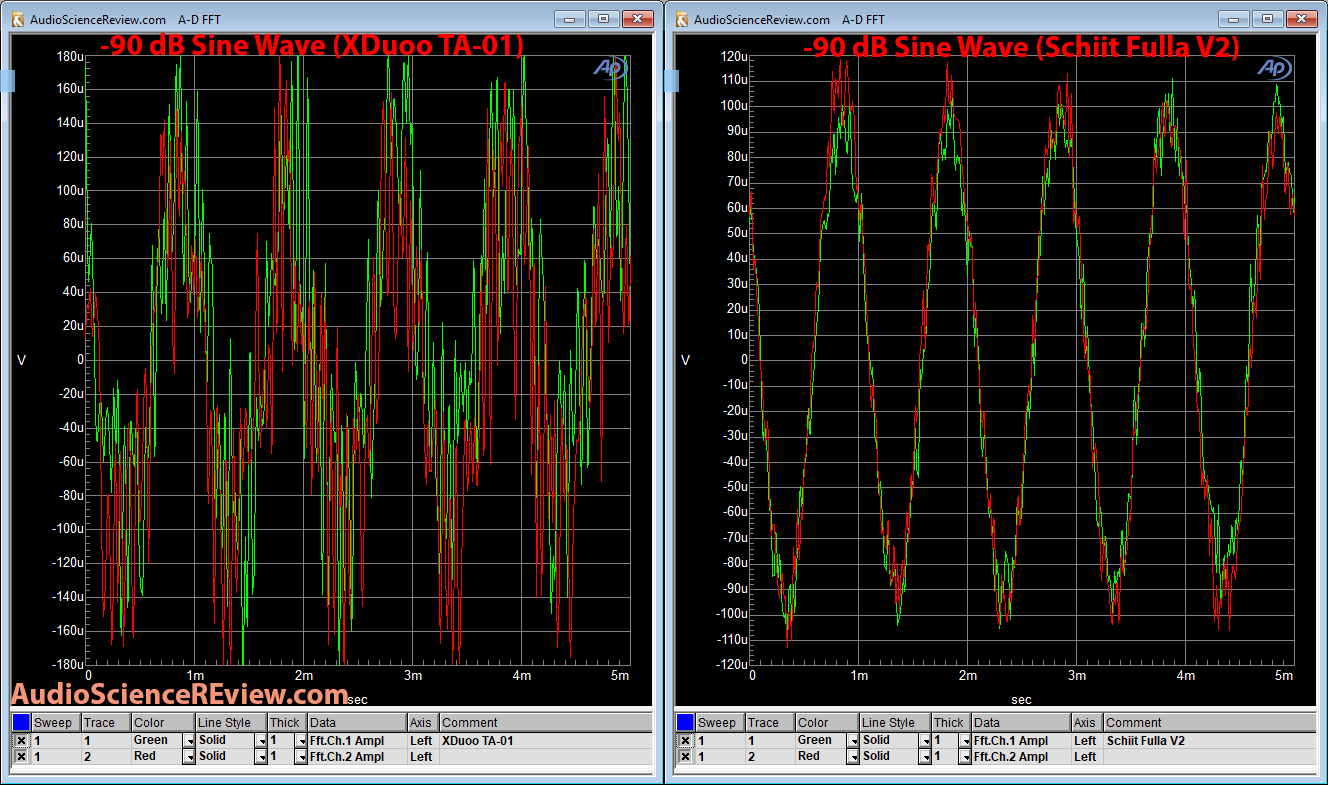 We see that the XDuoo TA-01 is saddled with tons of noise as compared to Schiit Fulla V2 which does pretty well here.

Let's dig into distortion profile using a 1 kHz tone that itself is filtered: 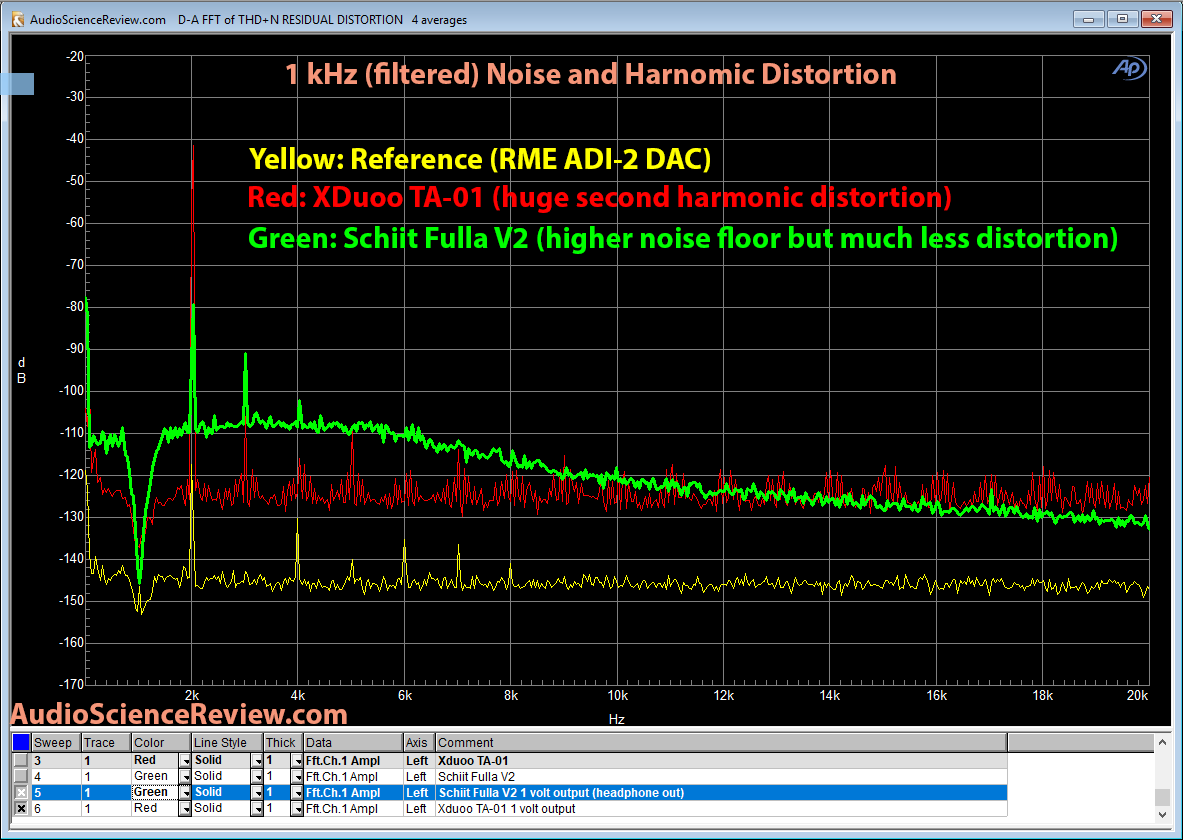 We see the classically talked about distortion with tube amps of lots of second harmonic distortion relative to higher order ones. At -45 dB that is quite high though. With other test conditions, it was as high as -30 dB!

While quite unfair, I have shown the RME ADI-2 DAC at the bottom in yellow. The second order harmonic there is almost 80 dB better than XDuoo TA-01! It is 40 dB better than Schiit Fulla 2 too.

Let's dig into the headphone output performance. First up is the output impedance: 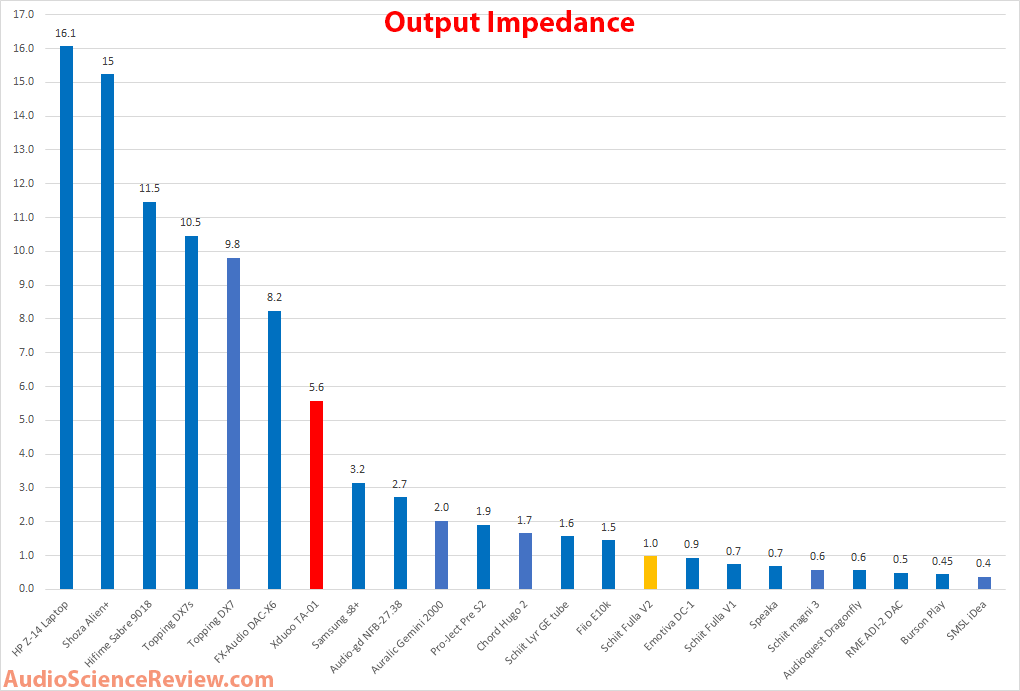 Schiit Full V2 does well with 1.0 ohm output impedance. The XDuoo TA-01 though falls behind with 5.6 ohm. 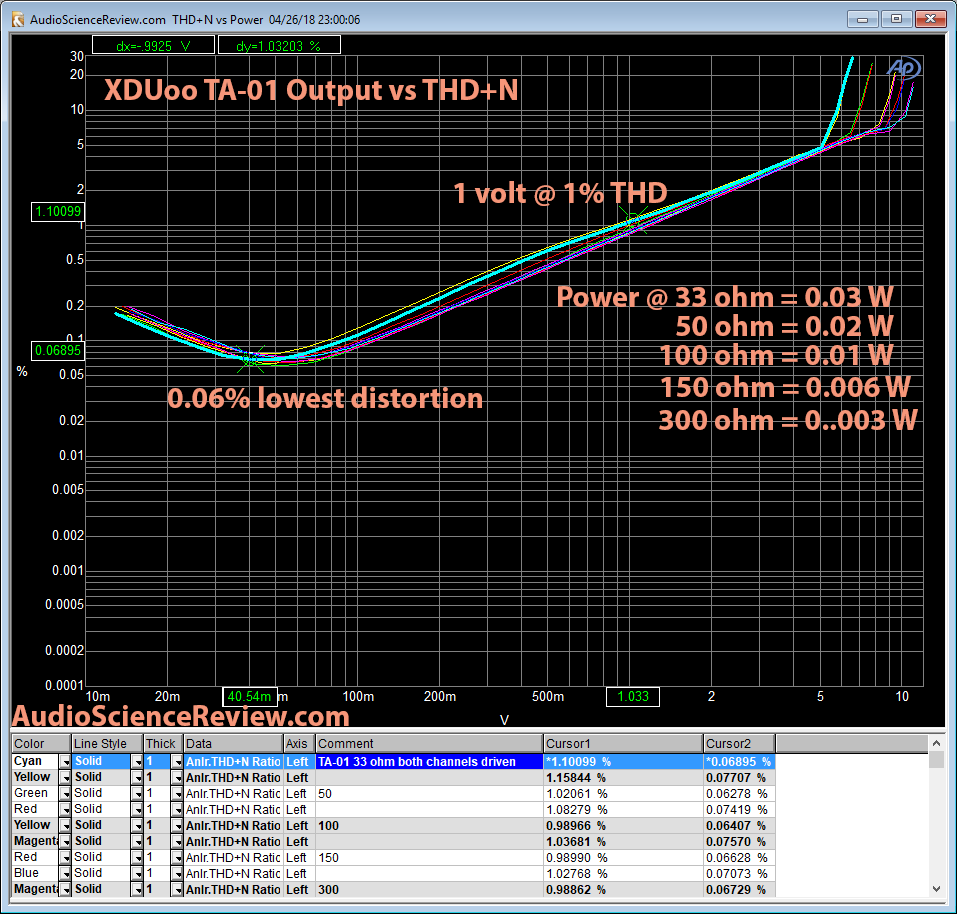 This remarkably consistent distortion profiles. Unfortunately levels are sky high, rising well into single digit THD+N percentages. Lowest level is around 0.06% which is not far off from published spec (these are both channels driven by the way).

Let's look at how Schiit Fulla V2 does: 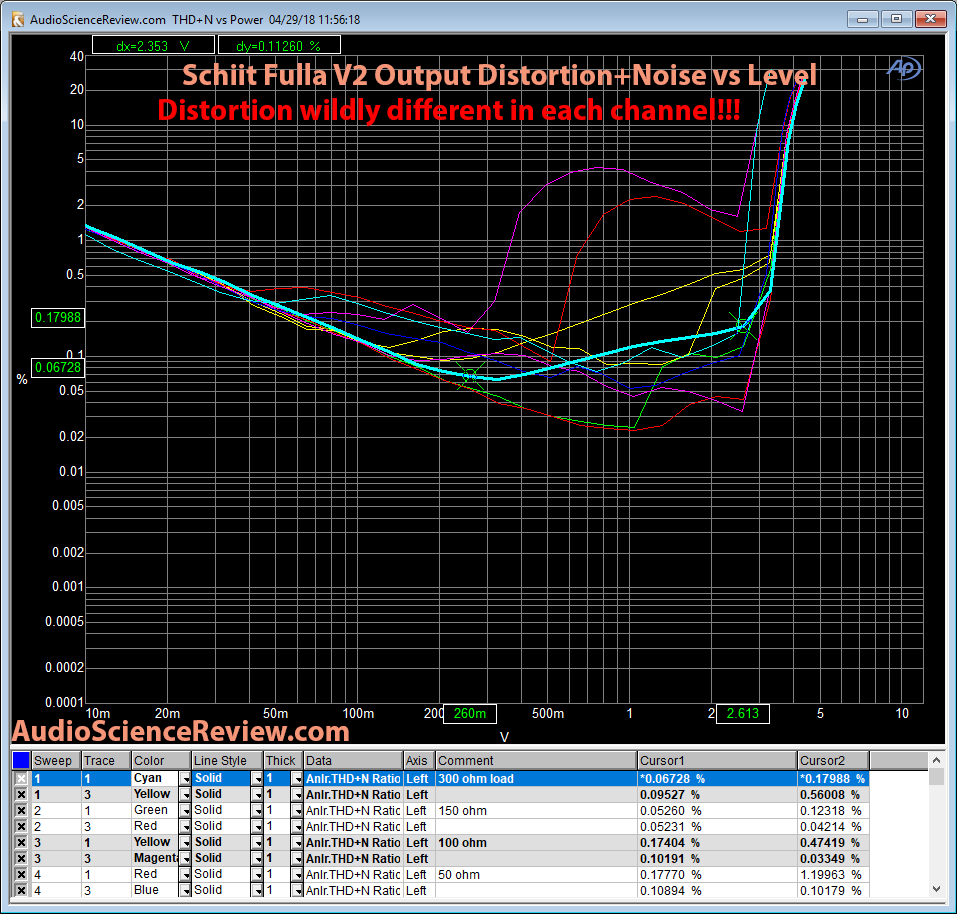 What the heck??? Each channel produces entirely different distortion profile! One is far more distorted than the other as this single measurement shows at 33 ohm: 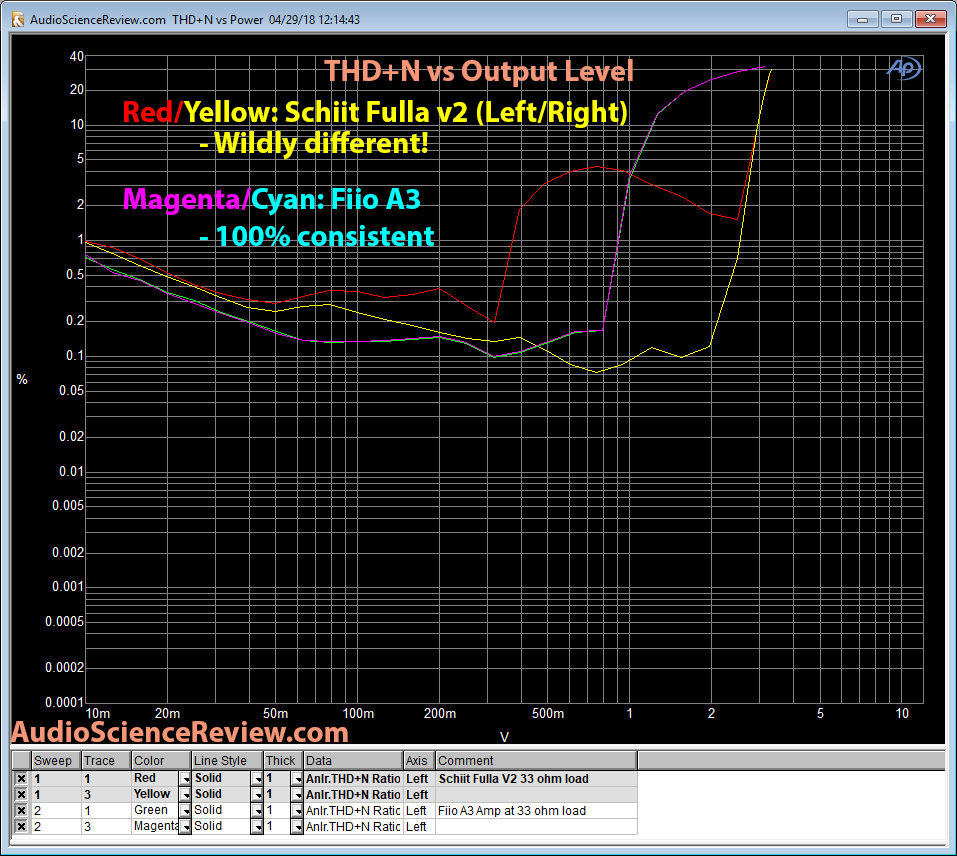 Look at how different red and yellow curves are. They were so different that I thought I test my setup with another yet unreviewed headphone amp: the Fiiio A3. As you see from its graphs, both channels produce identical distortion with the two lines falling on each other completely.

Come on Schiit. Can we not review any of your products without something so broken popping out? How can the two channels differ so much? Do they use the wrong parts in one channel? Not enough feedback to counter part variations?

Look, I don't get paid enough to sit there and annotate that power graph like I did with XDuoo TA-01. So if you want to know what power it puts out, you need to do the work yourself. I am too unhappy right now...

Listening Tests
I did fair amount of comparison listening tests with levels matched prior to making measurements. The results were very inconsistent. Depending on headphone in use, volume level and content, I would get different outcomes as to which was better. Not helping is the amount of noise generated by the XDu001 TA-1 which would bleed to Schiit's output once connected via my AB box.

Eventually I got one set of consistent results: using HifiMan HE400i with output levels matched around 0.350 volts. There, the Schiit had consistently better bass, and more resolution. Switching to XDuoo TA-1 the detail in between notes would collapse and bass would become weaker.

In less consistent tests I noticed that high frequencies were less in XDuoo TA-01 or put inversely, more in Schiit Fulla V2.

Further results were the effect of background hiss. This had an interesting effect at times of making one thing there was more sense of space between instruments. Hard to explain this. I hope to capture this and upload at some point for you all to listen.

I often hear people talk at length about change in soundstage when evaluating headphone amps. I heard no such thing despite focusing on it across many, many listening tests. There was no expansion or contraction of soundstage. What was there was always a function of content. Note that this was with levels matched. let them vary and you would come up with any outcome you wanted!

Conclusions
I struggled to figure out how to compare the XDuoo to other products. I thought by picking a solid-state product like Schiit Fulla V2, the difference would be clear in that the Schiit would produce better measured results across the board. This was not universally the case. A solid-state product lost out to a tube product from China no less in some of the tests.

At the end, this turned out to be a mixed results both in measurements and listening tests. If I had to pick one to listen between the two, it would be the Schiit Fulla V2. Otherwise, I would personally avoid both. The XDuoo brought no tube "magic" to the table. So I can't see dealing with a tube just for the sake of it.

Anyway, I may do additional comparisons of Schiit Fulla V2 to other products that compete with it.
Amir
Founder, Audio Science Review
Founder, Madrona Digital
Review Thread Rules
My Technical Background
My YouTube Channel
M

Is there some type of noise floor modulation issue with the schiit fulla 2? The noise appears less than the xduoo in the -90db test but is much more in the j test and 1khz test.
OP

xDuoo might actually be a sillier name than Schiit.
OP

You tell me. It was hell typing the darn thing over and over again.
Amir
Founder, Audio Science Review
Founder, Madrona Digital
Review Thread Rules
My Technical Background
My YouTube Channel
F

amirm said:
I may do additional comparisons of Schiit Fulla V2 to other products that compete with it.
Click to expand...

It should be compared to the FiiO E10K. Both are solid state amp/DAC combo units at around $100.
OP

flipflop said:
It should be compared to the FiiO E10K
Click to expand...

I have reviewed the Fiio E10K. I will do some comparisons in the future.
Amir
Founder, Audio Science Review
Founder, Madrona Digital
Review Thread Rules
My Technical Background
My YouTube Channel
M

Nice review Amirm! You've probably have said this someplace but what are you using for the A/B testing?
OP

Thanks. I actually have not said it before. It is a cheap AB tester I bought on Amazon: https://smile.amazon.com/gp/product/B00NTKFKMG/ref=oh_aui_search_detailpage?ie=UTF8&psc=1 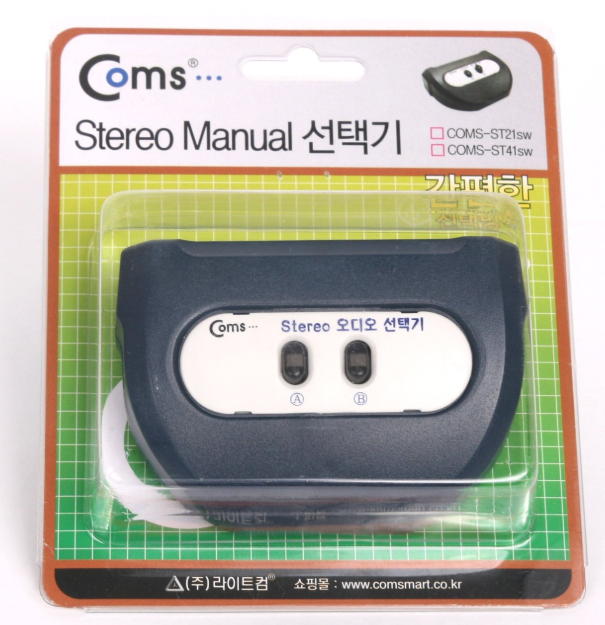 The switches really feel good and you can switch fast without much glitching. Internally the routes are on the PC board instead of wires and such.

For a cheap little box, it works well!

Note that it only has 3.5 mm in and out connectors so you need 1/4 TRS converters/cables to go with it depending on your application.
Amir
Founder, Audio Science Review
Founder, Madrona Digital
Review Thread Rules
My Technical Background
My YouTube Channel

I'm really curious about the business model and product life cycle of products at this price point.

It feels like there is a seemingly never-ending variety of <$150 amps.....only to have practically all of them get replaced / refreshed / discontinued after 6-12 months.

Are they intentionally appealing to the FOTM crowd?
OP

Flavor of the month
OP

There certainly is a glut of such products. The reason is that it is the biggest audio market out there. I suspect unit sales are over a million units a year.
Amir
Founder, Audio Science Review
Founder, Madrona Digital
Review Thread Rules
My Technical Background
My YouTube Channel

What is it with the weird capitalization a and doubled-up vowels? Why can't they have a sensible name like FiiO?

Would all the noise in the xduoo be caused by the tube being in the circuit path?
OP

I really enjoy your reviews. They make my day... everyday
G

I think the real issue is that the different headphones sounded different on both. That's a big negative. This means that the amp is a limiting factor and can't be trusted to be transparent depending on what headphones I'm putting on. The varying thd values - whatever. I don't want to listen at clipping anyway, so it means little to me other than is this clipping starting at a very early point where I would be likely to reac hit in normal listening. Even though you mentioned that you didn't want to measure power output, if you did, you would notice that's the biggest differentiator between the two units.
You must log in or register to reply here.

A
What amp should i get for my first time

Looking for a travel DAC/AMP
2