This is a review and detailed measurements of the Topping MX3 DAC, Bluetooth, Headphone Amplifier, and Power amplifier. You even get a remote control with it. Despite all that functionality it costs just USD $130 from Amazon including Prime shipping. I bought mine from Massdrop 10 months ago. I don't know what I paid but likely less.

From the outside, the MX3 looks quite attractive: 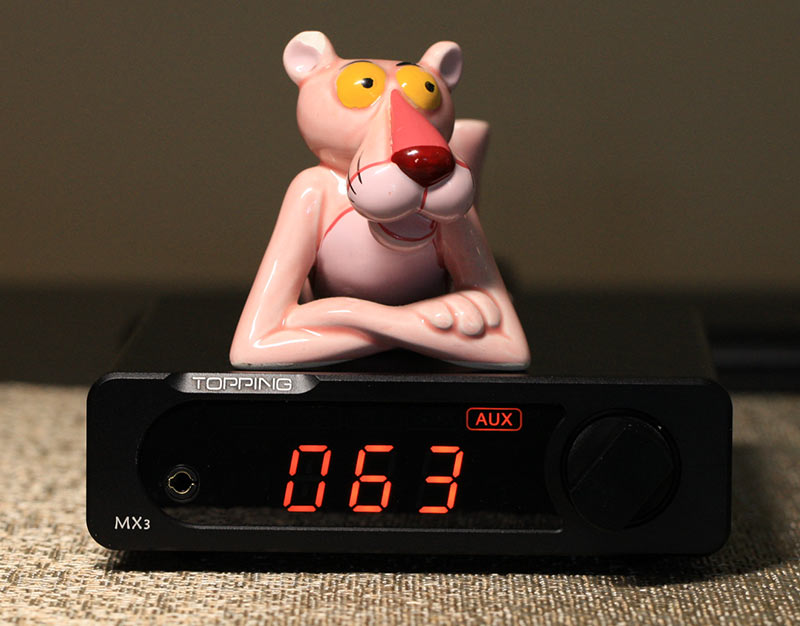 It has the same design language as the Topping DX3 Pro but even more attractive with that slanted logo.

The volume control is digital and very sensitive.

There is a ton of functionality here which I won't go into as there is a good review of it from Z which I will post after this review. Suffice it to say, it is very feature rich and well designed for such a bargain product.

Everything is powered by an external laptop sized switching power supply: 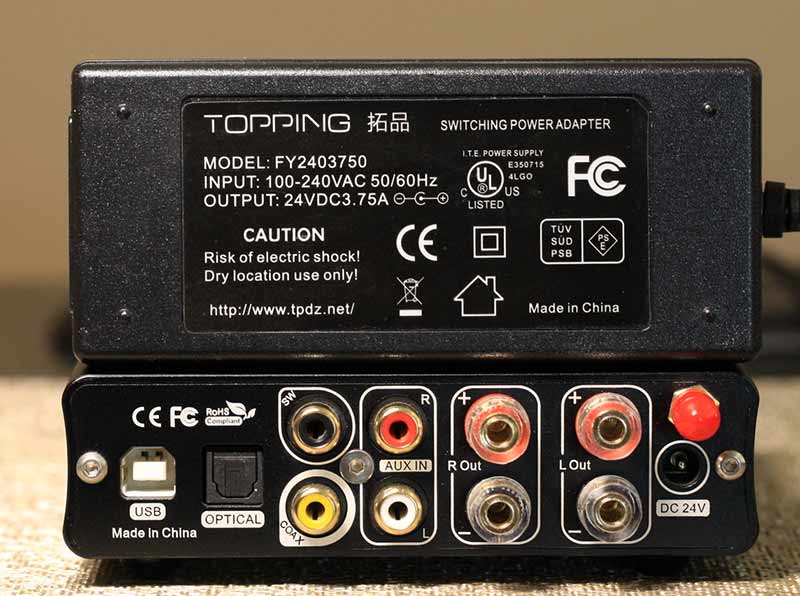 Not only is extra expense incurred in getting a Topping branded power supply, but typical of them it comes with full compliance with regulatory bodies both in US and EU.

For most of my testing, I used the USB input but did give the Aux analog input a try as well. I did not test the subwoofer out. Not did I play with Bluetooth.

If the MX3 performs, it will be the audio miracle of modern times so let's get into measurements. But first a note: I had to take some shortcuts to get through all of this functionality. I think it represents the missing measurements.

DAC Measurements
There are no line outs on the MX3 so I used the headphone output set to 2 volts to get our dashboard view: 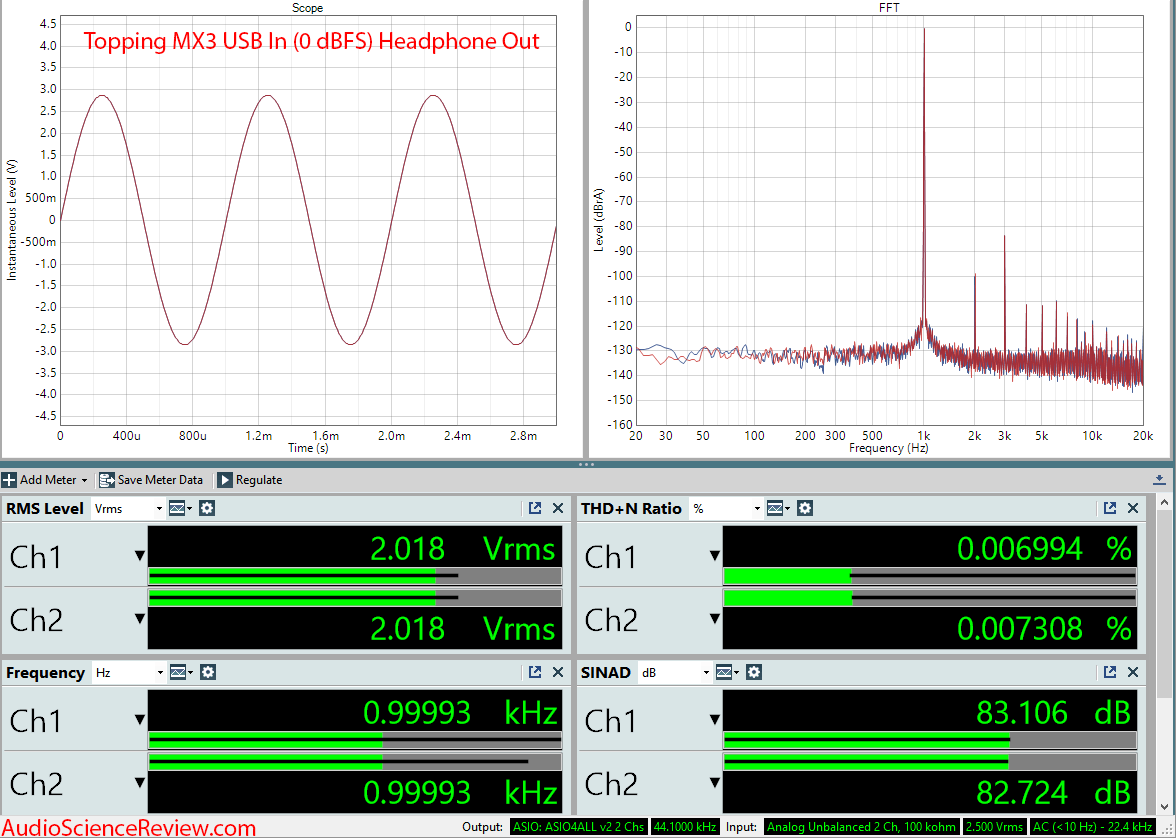 Oh no! Distortion is fairly high putting the MX3 in bottom class of all DACs tested:

This is quite a bit worse than any DAC Topping has produced and will set the limit for the rest of the measurements.

Headphone Amplifier Measurements
Let's start with our all important power versus distortion+noise at 300 ohm: 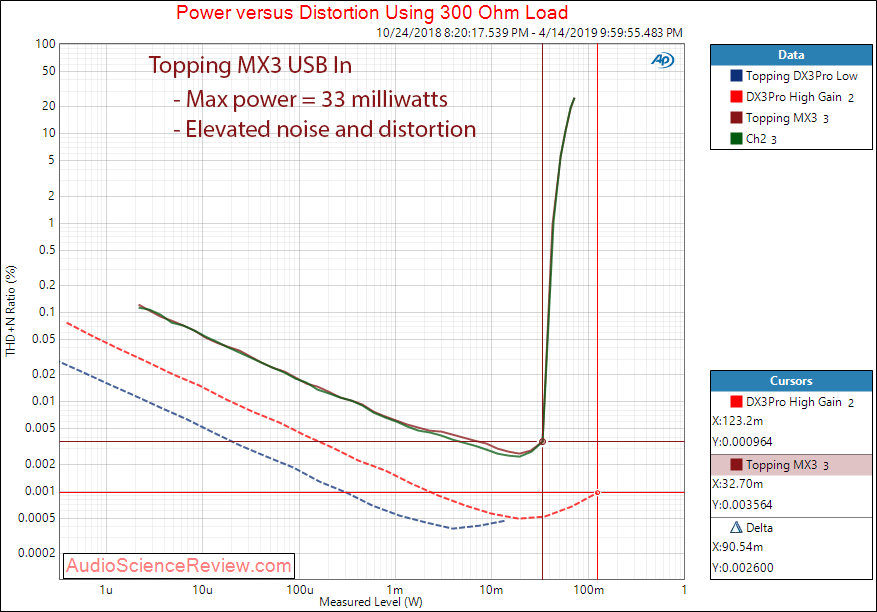 The higher noise and distortion in the dashboard comes into play here putting the MX3 fair bit behind its look-alike, Topping DX3 Pro. At 33 milliwatt power before clipping, there is not sufficient amount for a desktop amplifier. Then again if you listen to the DX3 Pro in low gain, there is more power here than there.

Using 33 ohm load we examine the current delivery of the headphone amplifier: 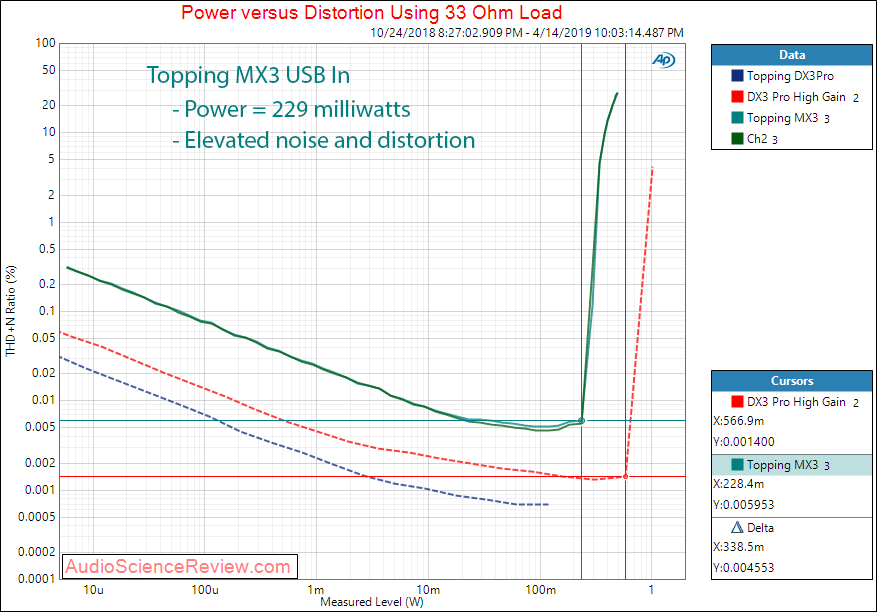 I was pleasantly surprised to see a very low output impedance in MX3:

This means you can use any headphone with the MX3 and not have its frequency response change because of output impedance. 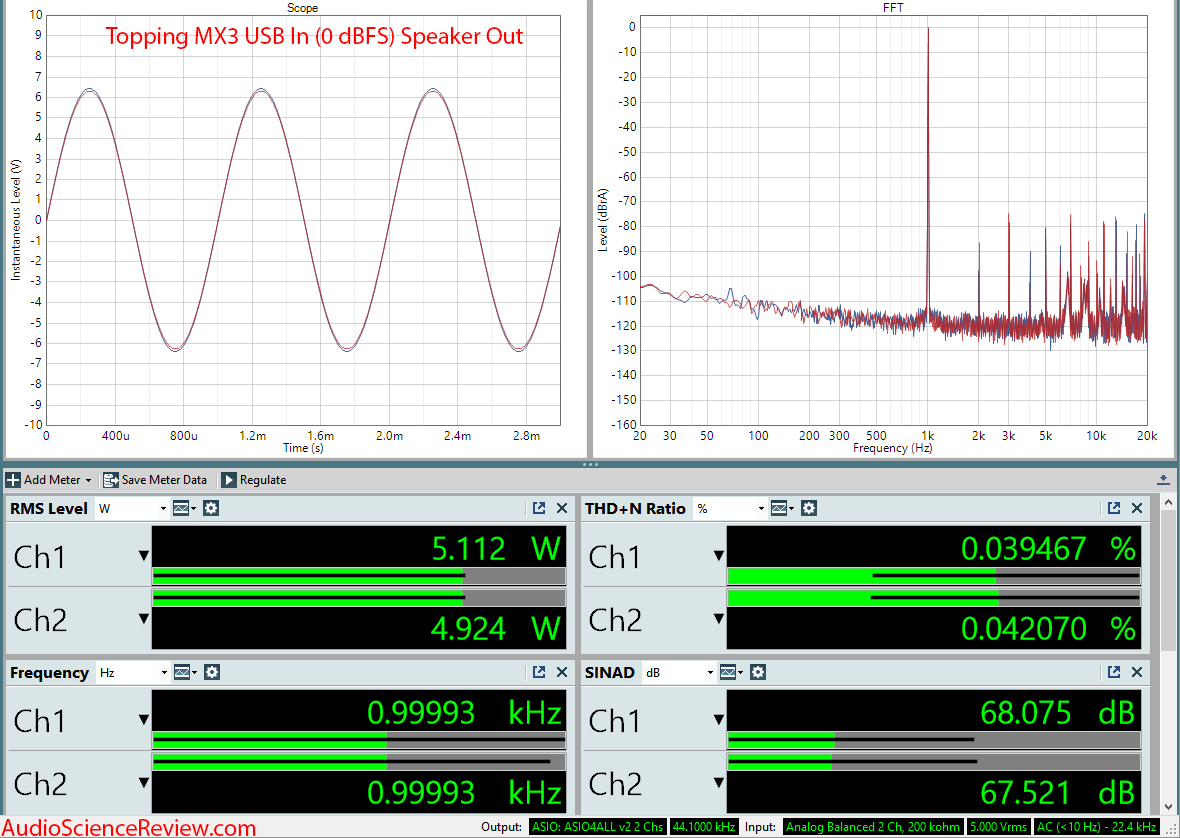 The amplifier is quite a bit worse than the DAC, showing a disappointing SINAD (signal over noise and distortion) of just 68 dB. This is not performance you want to brag about to your friends: 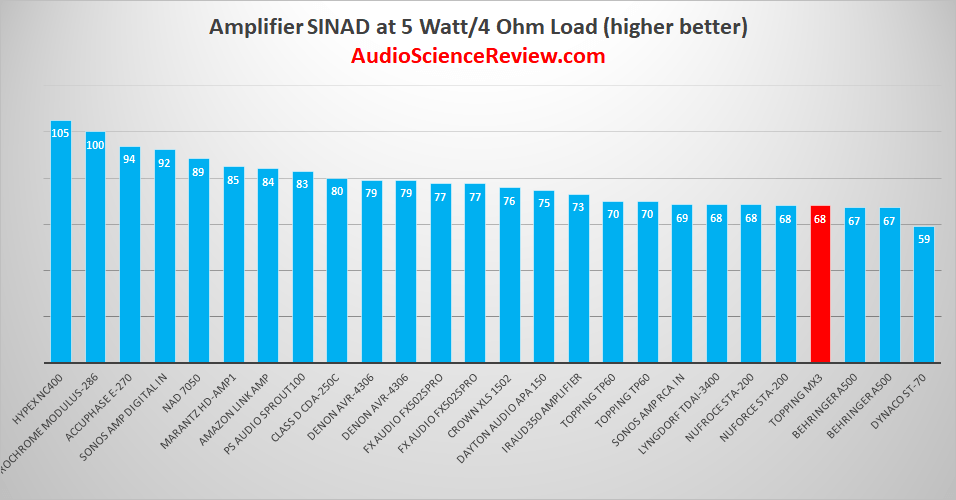 Here is the full power curve into 4 ohm load: 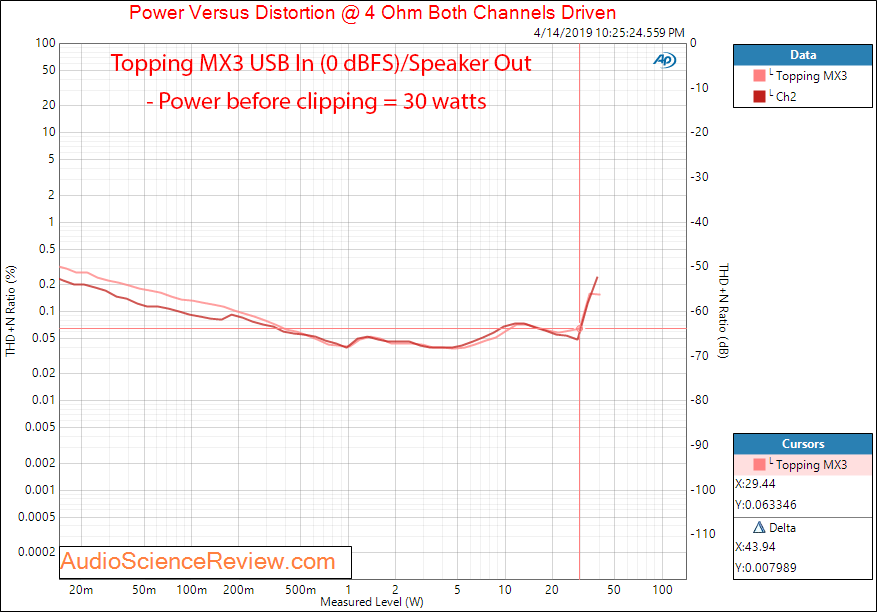 Usually amplifiers keep reducing their THD+N as the signal gets stronger relative to noise. Not so here. Distortion is high enough that at just 1 watt, it starts to dominate and flattens the curve until clipping at about 30 watts. More power can be had if you get it spike up a bit as shown so the unit meets its spec of I think 40 watts into 4 ohm.

Here is the THD+N versus power versus frequency: 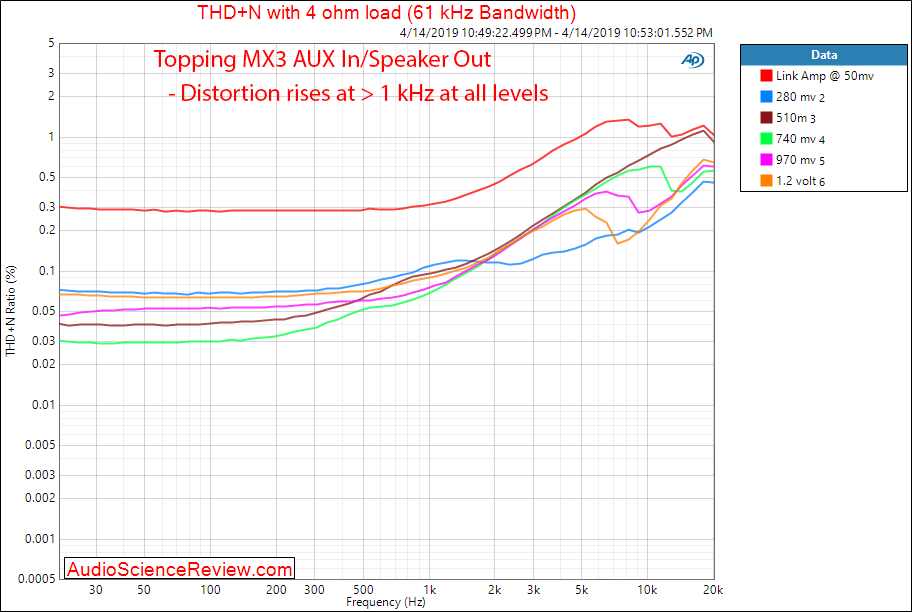 The issue here is rising distortion in high frequencies regardless of amount of power being output. 1 kHz test tone we use in the dashboard then is almost the best case scenario. By the way, the above test was performed with Aux input so that I could vary the input voltage as I do with other power amplifiers.

Here is out signal to noise ratio: 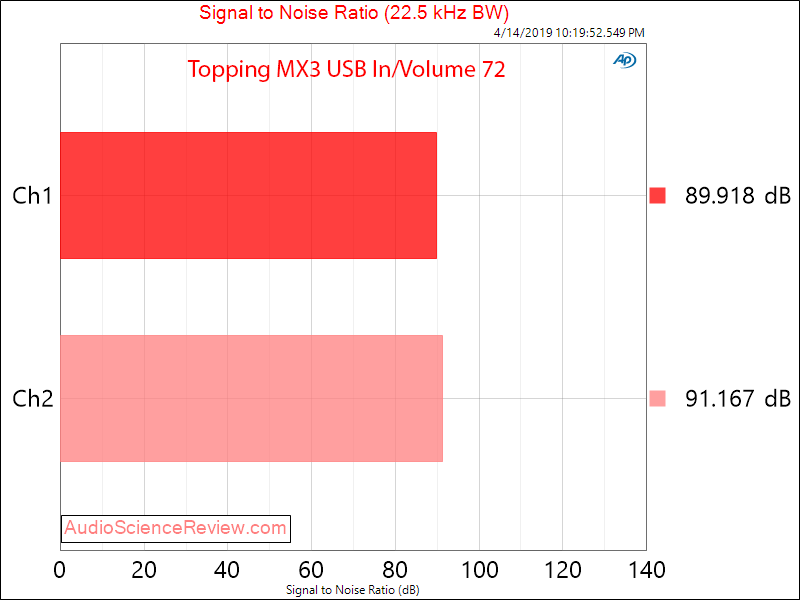 So not quite as good as CD's dynamic range.

Listening Tests
I only tested the headphone amplifier this way. I will at some point start testing with speakers.

With Sennheiser HD-650 high impedance headphone, there was good bit of power giving a physical sensation of bass. Alas, by then distortion would set it and the sound would get bright and corrupted.

Things changed with much lower impedance Hifiman HE-400i. There was plenty of volume here and I had to try really hard to get it to distort. It would do so but at levels I did not want to listen to for more than a second or two. Bass sensation was quite good bringing the full dynamic range out of these headphones which lesser powered headphone amplifiers cannot.

Conclusions
The only bright spot in the Topping MX3 performance is its headphone amplifier especially with low impedance headphones. Outside of that, the MX3 disappoints. While nothing is broken and design clearly verified (Audio Precision graphs are included in the manual), the bar was set quite low to meet the price point.

Is the MX3 transparent enough? Probably for most people. Is it transparent enough for me to recommend it? No. You are much better off with discrete components. You will be paying more though to get that performance.

Am I being too critical? We had fish chips yesterday at our favorite waterfront restaurant and it cost $57 for the three of us. Two of those meals and you can have the Topping MX3. So the value is incredible. Let me know what you think.

The guy from Nigeria who was selling me the money tree sent me email saying due to my mention of his services last weekend, he is inundated with calls so he has raised his price for shipping and handling ot $3,00. So please donate money right away before he raises his price even more using:

Here is a good overview of functionality of MX3 from Z reviews:

Thanks you for this long awaited review.
Iis it a proper full-digital amplifier?
OP

Why did you write "Dac & Amp" in the title, isn't it rather "Headphones amp & Amp", since there's no analog out?
W

I would think this is a neat little amplifier for bedroom use. Add a Chromecast Audio and some not too inefficient budget speakers and you are done. Does it have an auto on/off function? My Ava Maestro 50 does, and that is very convenient with the sleep timer in the TuneIn app on my phone stopping the CCA after a while.
M

Now we only need the SMSL AD18 and Sabaj A4 to compare .

Disappointed by the high distortion >1kHz. If you were to do SINAD measurements at 10kHz, what would that be?
Last edited: Apr 15, 2019
Loudspeaker Data & Preference Ratings
D

That is quite dissapointing performance, in comparison to their very impressive D10 and D30 DACs at least, but of course at this price point one must temper their expectations, given how much functionality is crammed into a very compact box. I guess since this isn't a clear "win", I will need to wait for the SMSL AD18 (and I guess the Sabaj A4 too) review; I hope its coming soon
B

I would like to know if possible, the sub woofer crossover point.

This looks nice for my den.

amirm said:
Here is the THD+N versus power versus frequency:
Click to expand...

Their THD+N plot is much better, are they limiting the bandwidth to just 44.1kHz and/or using a different voltage?
Last edited: Apr 15, 2019
Loudspeaker Data & Preference Ratings
F

I had to join just to jump in in this one...
Long time lurker...
First of all thank you amirm for everything you do for us...

I was wondering if maybe you got a bad unit?
I actually have an MX3 and im running some EXTREMELY clear speakers on it that would show this distortion easily.
Mine actually has an audibly cleaner output than the Rotel RB-981 that the MX3 took the place of....
Although I am running off the optical not usb and according to Topping's specs the optical can do more...

Maybe you could try on optical?
Would be interesting to see..


Maybe one of us will have to send another one your way just for elimination of a possibly bad unit?

fireboltr said:
I actually have an MX3 and im running some EXTREMELY clear speakers on it that would show this distortion easily.
Click to expand...

5W @ 0.04% THD would be inaudible on any speakers on typical music. Even a pure tone at 0.04% THD would be a phenomenal, if not impossible challenge on speakers. It mostly stays under 0.1% which has been the recognized limit of audibility for many decades.
Stealing AdamG247's legendary quote: "I think we can almost all agree that this thread is Dead. Living on life support, and I’m pulling the plug."

MZKM said:
Disappointed by the high distortion >1kHz. If you were to do SINAD measurements at 10kHz, what would that be?
Click to expand...

That would be inaudible (1st component at 20 khz).
F

restorer-john said:
5W @ 0.04% THD would be inaudible on any speakers on typical music. Even a pure tone at 0.04% THD would be a phenomenal, if not impossible challenge on speakers. It mostly stays under 0.1% which has been the recognized limit of audibility for many decades.
Click to expand...

@5W yes... but wouldnt this ramp up rather quickly at closer to max continuous output??? i.e 30W?
I had more noise runing an ASUS Xonar and Rotel RB-981 amplifier... just getting anything having to do with analog audio out of the computer case is a good idea.

even if it is THIS bad... well its only $130 and it is destined for the garage amp duty soon enough.

For general non critical listening I think its great for what it does...
M

LTig said:
That would be inaudible (1st component at 20 khz).
Click to expand...

fireboltr said:
@5W yes... but wouldnt this ramp up rather quickly at closer to max continuous output??? i.e 30W?
Click to expand...

The wattage graph shows that agents near max output, it’s about the same amount of THD.
Loudspeaker Data & Preference Ratings

amirm said:
Is the MX3 transparent enough? Probably for most people. Is it transparent enough for me to recommend it? No. You are much better off with discrete components. You will be paying more though to get that performance.

Am I being too critical? We had fish chips yesterday at our favorite waterfront restaurant and it cost $57 for the three of us. Two of those meals and you can have the Topping MX3. So the value is incredible. Let me know what you think.
Click to expand...

If the budget is limited to say 1k$ then it makes more sense to go with the MX3 and invest the remaining budget into speakers. There are probably very few speakers in this price range which are able to reveal the problems of the MX3.

That is, if active speakers are no option at all. In my view a better DAC with e.g. a pair of JBL 305 should deliver the best SQ in town.

amirm said:
No, it uses a class D amplifier with analog input (TDA7498E).
Click to expand...

Is this IC the cause of the bad SINAD?
M

LTig said:
pair of JBL 305 should deliver the best SQ in town.
Click to expand...

Kali LP6 is gonna give the 305P’s a run for their money.
Loudspeaker Data & Preference Ratings
You must log in or register to reply here.

Wednesday at 4:20 PM
Ugo Ruffini
U