amirm said:
Man, that is disastrous packaging. Never thought I would see a Sony product with such a mess inside it.
Click to expand...
Do you think Sony designed it, or just made a phone call to China?

Surprising. Sony stuff runs the gamut and is no pat guaranty of quality. I guess when the cheap stuff is flogged as expensive stuff you get consumer whipped.
I would rather be called a fool by objectivists telling me I don't hear something that I think I hear over being called a fool by pie in the sky audiophiles who peacock expensive audio jewelry telling me that I should be hearing something that I don't hear.

not sure why this is so upsetting? it's still better than the crown xls and onkyo power amps for speakers?

Amir! Thx for excellent comprehensive review! So if u want a machine like this - options are Raspberry Pie and/or PC/Mac ?

amirm said:
Man, that is disastrous packaging. Never thought I would see a Sony product with such a mess inside it.
Click to expand...
Indeed, it cannot be a Sony's own project, the project was maybe commissioned to some cheap factory without any supervision or verification by a Sony's team.
How much the audio machines for the consumer markets represents for Sony today ?
Sony's keeps up the home theater machine developments (amplifiers, blu-ray players, projectors ...), but in the Hi-Fi they are totally out.
Last edited: Feb 26, 2019

folzag said:
That could well be it. Like I said, the headphone out is unusable, though the line-out I've not had issue with.
Click to expand...
It is a pity, indeed ...
Pls. sell it on eBay / Craigslist ASAP before this review spreads up ...

graz_lag said:
It is a pity, indeed ...
Pls. sell it on eBay / Craigslist ASAP before this review spreads up ...

Click to expand...
Funny thing is, I like it. Well, for the most part. It ticks all the boxes I wanted in an AIO digital player. #1 I like is that it can be used completely stand-alone from the buttons on the front panel. After that Sony's Android app is pretty nice too. The DAC line-outs I never had a complaint with. I suspected they might not have been state-of-the-art, but I was by-and-large blissfully unaware, especially after I started using the JDS Atom in place of the integrated headphone out.

My single biggest gripe was no SW volume control for the DAC line-outs.

My real disappointment is that there is not a comparable product (so far as I've discovered) from any other manufacturers at a mass market price point.
R

I quit buying Sony products years ago when I had one of their expensive laptops and the battery failed 2 weeks after the 1 year warranty . They refused to give me a new battery under warranty . Ok fine , it cost them a lot of potential purchases from me.
Apple would have replaced it for free , guaranteed .

I saved up from a summer job in 1983 to buy the CDP-101 and was the first kid at college to own a CD player. In later years, I owned those massive ES players, including the 707ES -- what an incredible machine. Without exception, those products represented solid and proud engineering feats. This was not a given, and it was not a golden age: I bought a Yamaha integrated amp around that time which was not cheap and which was truly awful -- audible noise from the amp section at all times. I had an expensive Kenwood three-head cassette deck which broke every month! And yes, somewhere in there, there was a Sony cassette deck that was just as bad, but then, it wasn't the ES line. Sony always had some crap, but it was obvious crap and priced accordingly. Not so a $1,000 streaming audio device. I've said before in my posts that this site is a real eye-opener and ought to shame manufacturers into offering products that meet a baseline level of performance. Carry on!
Mac Mini i7 server running Roon
Tidal lossless
RME ADI-2 DAC or Benchmark DAC3 HGC or Topping dx7s (depending on my mood)
Dutch & Dutch 8C
Audeze LCD-2, LCD-3
Sennheiser HD800 modded

Soniclife said:
Do you think Sony designed it, or just made a phone call to China?
Click to expand...
I'd figure at least one phone call to Malaysia, since that's what it says on the back... 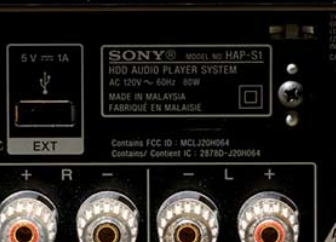 RayDunzl said:
I'd figure at least one phone call to Malaysia, since that's what it says on the back...

I wonder if it is a clone of some other device?
Click to expand...
The French spelling is Malaisie. Trying to decide whether to think of it as malaise or the way you might pronounce it if not French.........my lazy. Either fits.

RayDunzl said:
I'd figure at least one phone call to Malaysia, since that's what it says on the back...
Click to expand...
Doubtful it was designed in Malaysia. Many of our suppliers use Malaysia for manufacturing only.

Yikes.
But at least it has a UL mark.
Only on ASR do I get called "light bulb boy"
G

confucius_zero said:
not sure why this is so upsetting? it's still better than the crown xls and onkyo power amps for speakers?

For sure the hypex nc400 is ideal but it can't be bought and shipped on amazon prime or local store for under 1k.
Click to expand...
I don't know either. Good luck hearing a negative difference on music based on these specs. It just doesn't perform measurably better of which there's clearly better amps out there. The ony problematic item is the awful impedance on the headphone amp. The bas-x a-100 also has a 220 ohm resistor but it is designed to be bypassable though at the expense of significant noise.

It is not worthy of a Sony badge.

I can pinpoint the exact time in audio when things went downhill. The inclusion of a 'menu' button on anything aspiring to high fidelity ruined it.

Basically, that was the point where dedicated and expensive hardware was swapped out for microprocessor control, rotary encoders and as few actual physical controls as possible. Video recorders were the first to implement 'menus' to save buttons and front panel real-estate. All done for cost savings. Remember navigating a menu to change from SP to LP on your VHS when the year before we had physical buttons?

The only place I want to see a stinkin' menu is at a restaurant- they have zero place on my HiFi equipment.
Ricky Roma: I subscribe to the law of contrary public opinion... If everyone thinks one thing, then I say, bet the other way...
G

Now, what I really want to see tested is the Sony DMP-Z1: 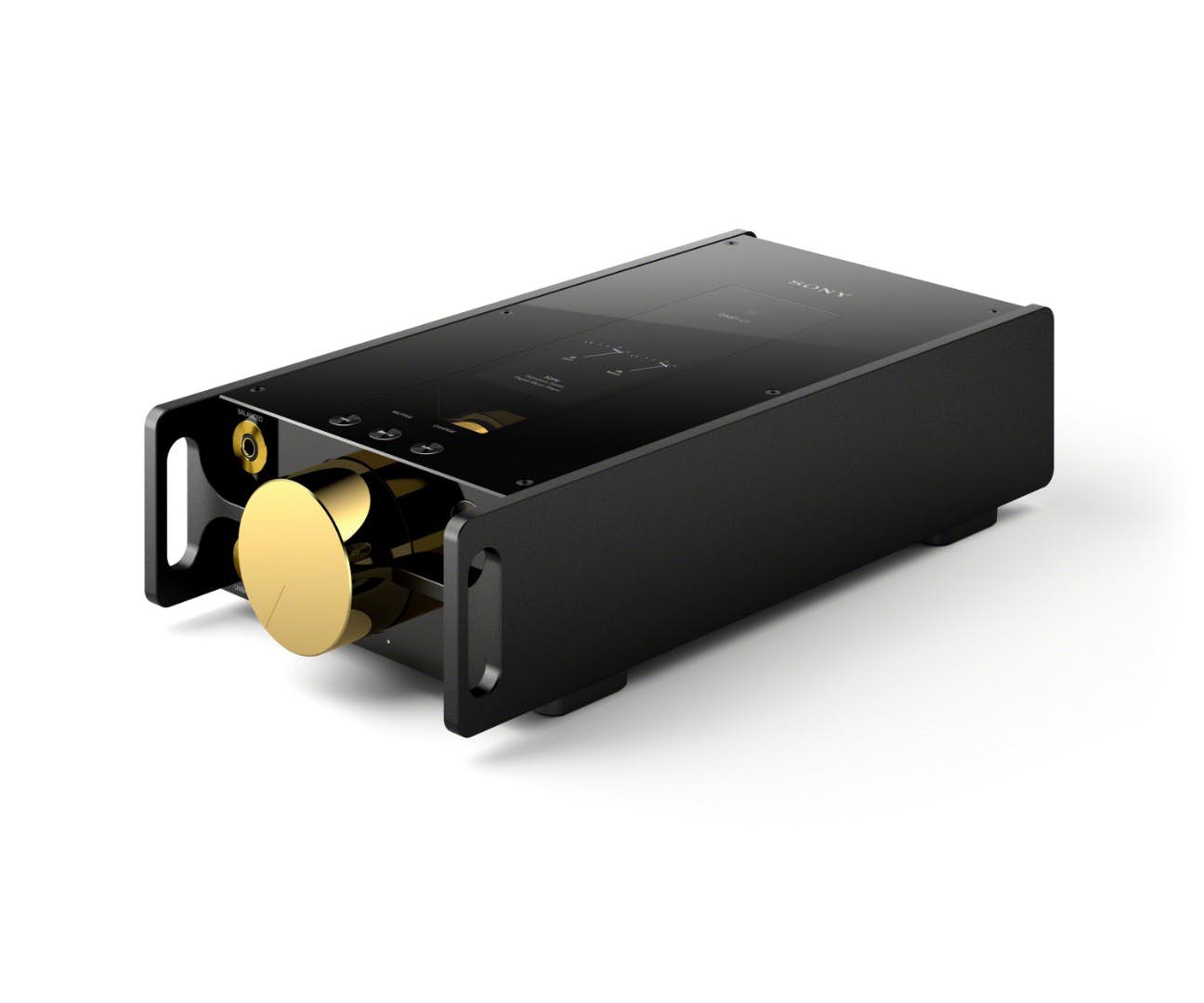 I was greatly discouraged by seeing the measurement of amirm.
I am very embarrassed as a Japanese person by seeing this product of Sony.
Former Sony never made such a product.
Recent Japanese audio makers are crazy. They lost quest for technology.

amirm said:
Sony does not spec the power level at 4 ohm. This is what I got: 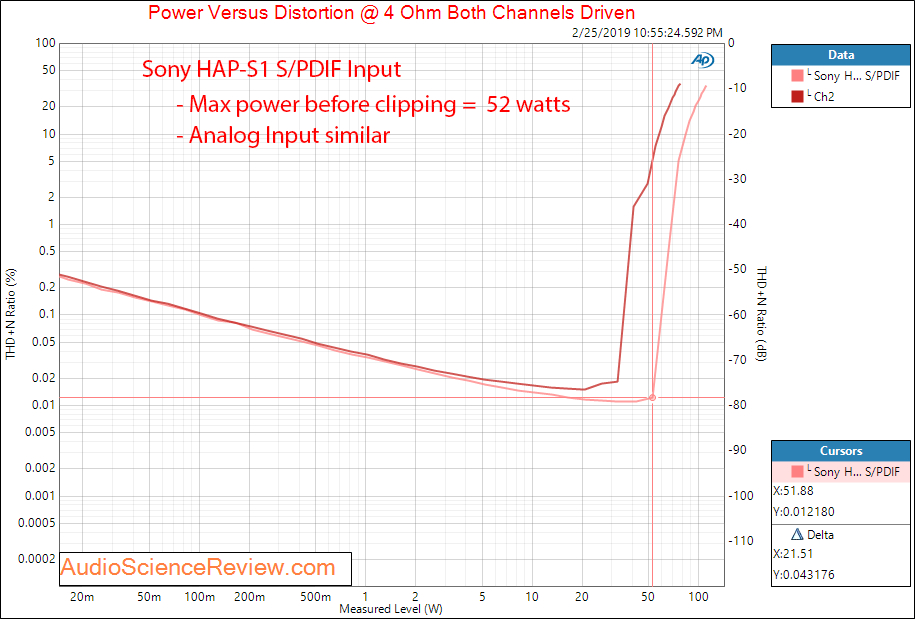 Click to expand...
So what's with the wildly different channel performance with both channels driven at 4 ohms? One about 30W one about 50W. Something is not right there.

Last edited: Feb 27, 2019
Ricky Roma: I subscribe to the law of contrary public opinion... If everyone thinks one thing, then I say, bet the other way...
K

I'm not sure you cant say that Sony in the past measured poorly . To my recollection this is the only real measurement done on a Sony product. They could have been bad since the start. I guess our subjective mind might have gotten the best of us .

restorer-john said:
So what's with the wildly different channel performance with both channels driven at 4 ohms? One about 30W one about 50W. Something is not right there.
Click to expand...
Yes, the two channels are different. I ran that test a few times to be sure. If I use finer steps I could get a few more watts out of both channels on the graph.

As to their specs, I could not figure out what "40 HM" meant. Is it a type for 4 Ohm???
Amir
Founder, Audio Science Review
Founder, Madrona Digital
Contributing Editor, Widescreen Review Magazine
Click for My Technical Background
Master List of Audio Reviews
You must log in or register to reply here.
Share: Facebook Google+ Reddit Pinterest Tumblr WhatsApp Email Link