This is a review and detailed measurements of the Schiit Valhalla tube headphone amplifier. It is on kind loan from a member. The unit is discontinued. I think it came out in 2011 (?). From what I can tell, the cost was US $450 or so.

The sample I have has been through some war duty but otherwise matches the look of typical Schiit products:

The volume control has a good feel.

There is nothing in the back but a set of RCA inputs, power and on/off switch so I will not be posting a picture of that.

The unit is very heavy for its size and gets incredibly warm.

Not much else to the unit so let's get into measurements. 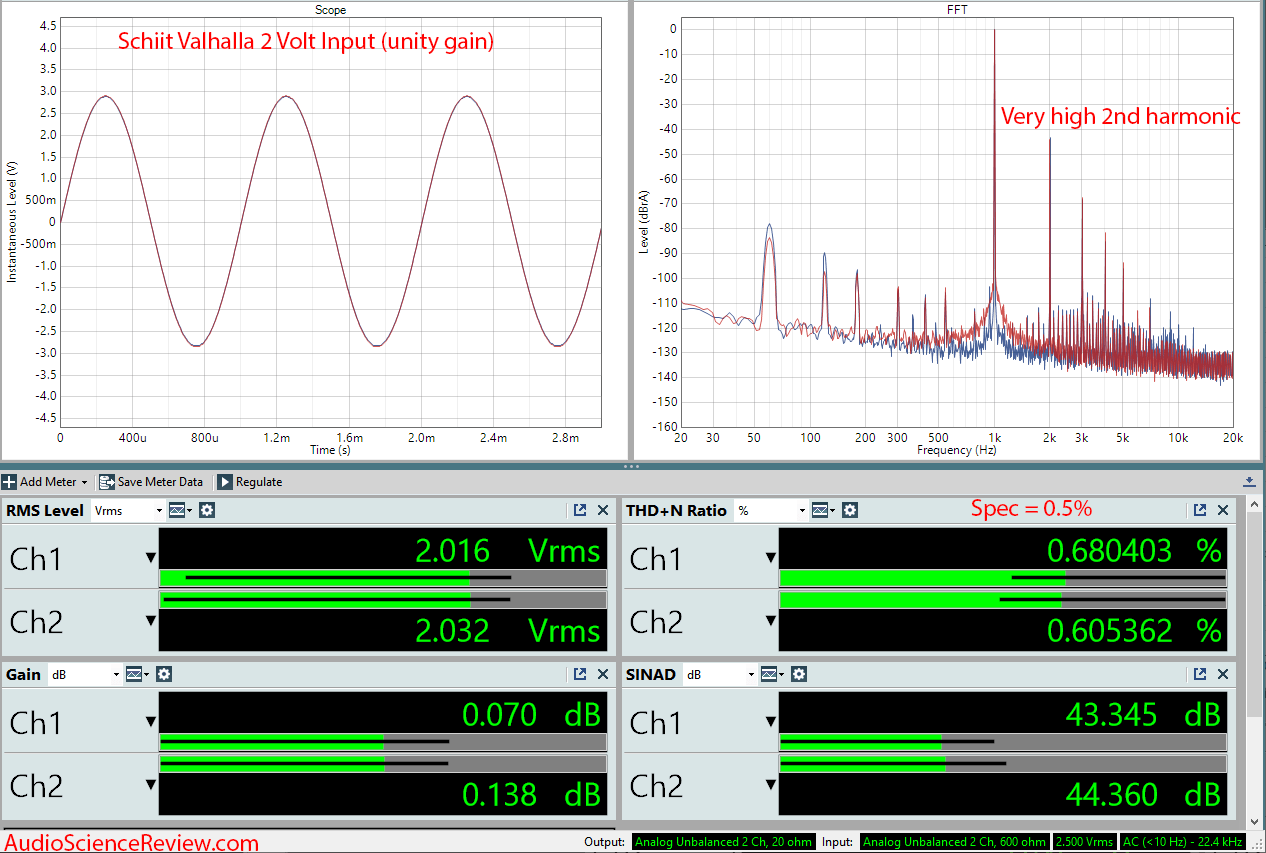 Even though I am at just 2 volt output, distortion was through the roof. I thought something was broken by Shiit specs the unit at 0.5% distortion so we are "fine."

While Channel 1 was stable, channel 2 was all of the place. Its output level and THD+N would constantly vary. Reseating the tubes did not help so something is wrong with those set of tubes/channel.

SINAD (signal over noise+distortion) is just 43 dB, placing the Valhalla at dead last position in our headphone amplifier line up: 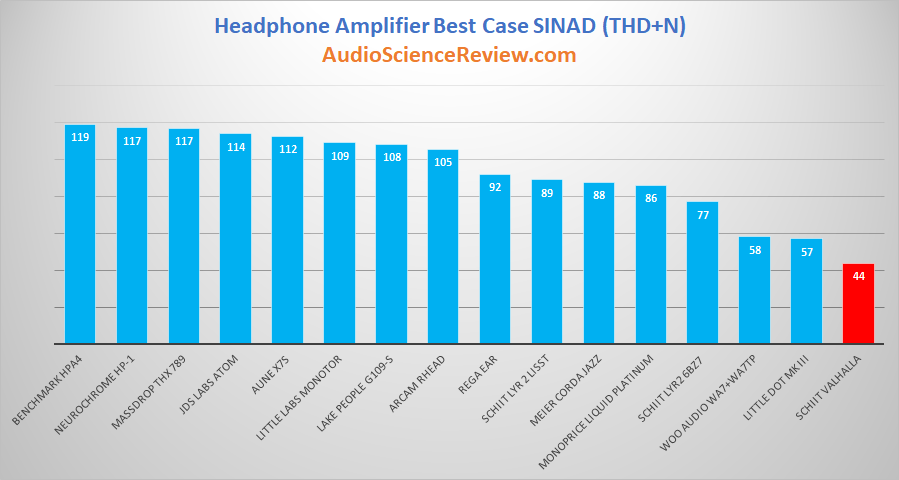 Signal to noise ratio at full level and 50 millivolts out is:

Let's forget about the second channel which is off the reservation (broken). The "good" channel is well, bad: 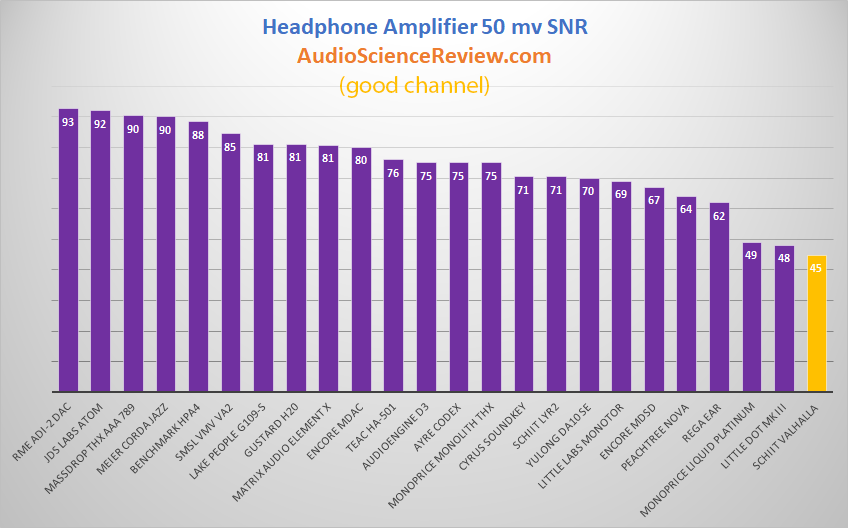 That is a second last place finish. Best not use any sensitive headphones with this amplifier.

Frequency response of the good channel is fine: 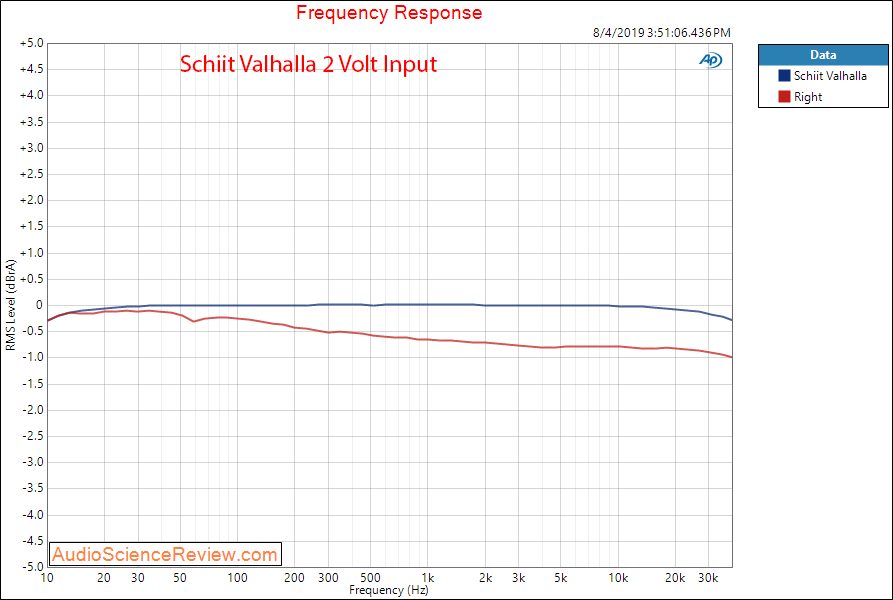 This will change the frequency response of many headphones and rules out using it with low impedance headphones due to high losses.

Output power vs THD+N at 300 ohm looks pretty horrific to the eye: 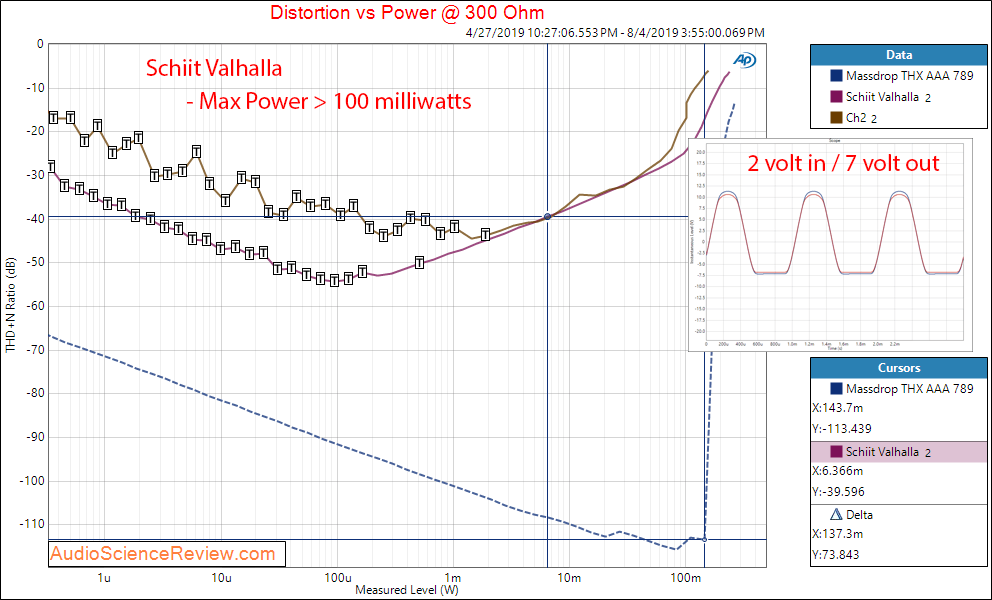 Forgetting again the broken channel, we see that the other channel also has very high levels of noise and distortion. The latter is mostly caused by asymmetric clipping of the negative cycle together with symmetrical rounding of the tops of the curve. 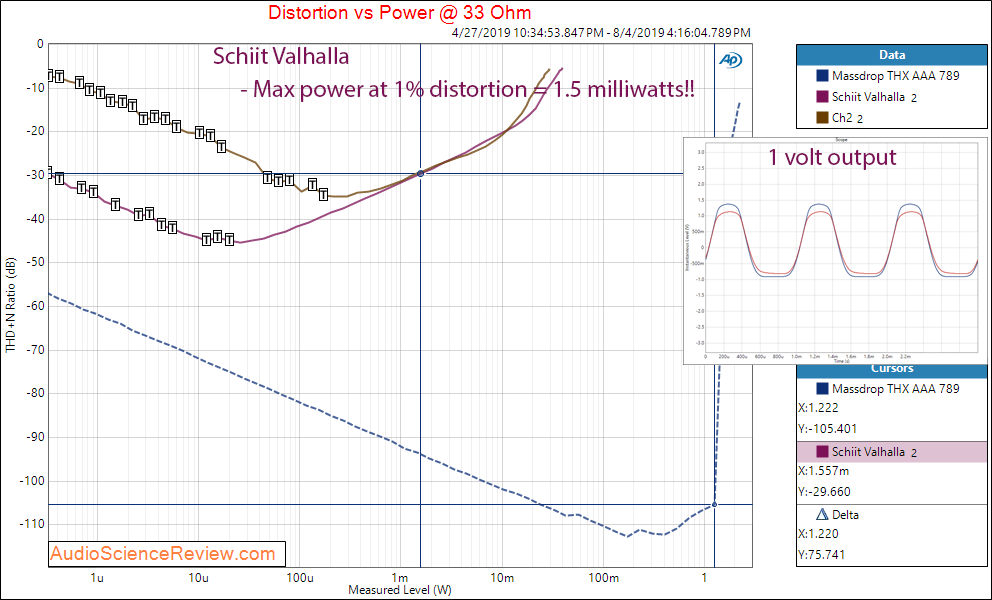 Stopping at -30 db, we barely have 1.5 milliwatts of power! There are dongles that do better than this.

Multitone response as you can imagine, is very poor: 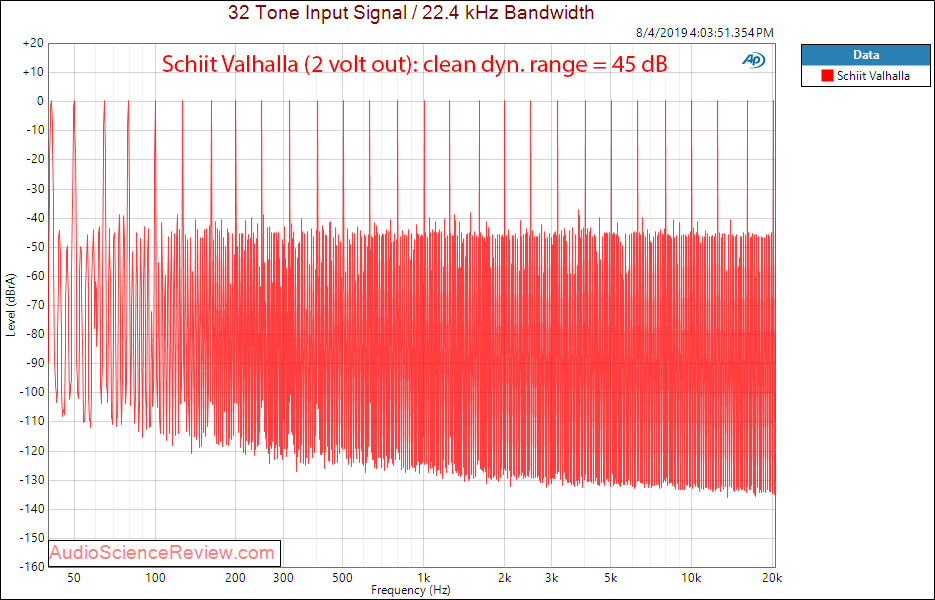 I think we should stop here and not belabor the point.

Headphone Listening Tests
I thought I get the easy out of the way with testing with Hifiman HE-400i low impedance headphone. As soon as you got any decent volume out of the distortion was evident especially with bass notes. Turning the levels higher would cause massive distortion, akin go turning up a clock radio to max volume. It is basically not usable.

Switching to Sennheiser HD-650 completely transformed the experience. Now the fidelity was good and there was plenty of volume until distortion set it. Correlation was quite weak with THD+N when I compared the Valhalla with JDS Labs Atom. Unless I really paid attention where the JDS Labs had slightly less distortion in highs and tiny bit better resolution, you could not tell them apart. Indeed I had my son here who is in his 20s and has excellent high frequency acuity. He could not tell the two units apart.

The dominances of second harmonic and the fact that it masks better, explains why the audible effect is not anywhere close to what the numbers indicate.

Mind you, there was change in frequency response due to high impedance of Valhalla. I could hear the tonality changing a bit, with highs more muted with Valhalla. This also made level matching more difficult.

Of note, there was a tiny soundstage difference in favor of the Atom because it has slightly more highs. Otherwise, there was no magic to the sound of the tube other than the subtle things noted above. Mid-range was NOT more mellow. Soundstage was NOT wider. Nothing was more liquid, etc.

Conclusions
Between high distortion levels, fragility of the tubes, and very high power consumption and heat, I can't think of a reason to buy the Schiit Valhalla. This Schiit, is really Schiit.

That said, if you have an affinity for things like this, and can buy one very cheap, and have a high-impedance headphone, and like a permanent but subtle EQ applied to all of your music, I am not going to chase you around the block if you buy the Schiit Valhalla.

We plan to go on a road trip next week. While we have money in the bank, spending you all's money is always more fun! So please donate what you can using:

Poor Pinky had his mind blown by how bad the measurements were again !

How old are the tubes?

Xulonn said:
How old are the tubes?

Are there any reasons to believe this amplifier might have performed better when new?
Click to expand...

I don't know. Hopefully the owner sees the question and answers it.

On second question, the measured distortion is similar to what Schiit advertises so likely is representative of when new.
Amir
Founder, Audio Science Review
Founder, Madrona Digital
Contributing Editor, Widescreen Review Magazine
Click for My Technical Background
My YouTube Channel

The SNR at 50mV is just as good as my Ohropax® 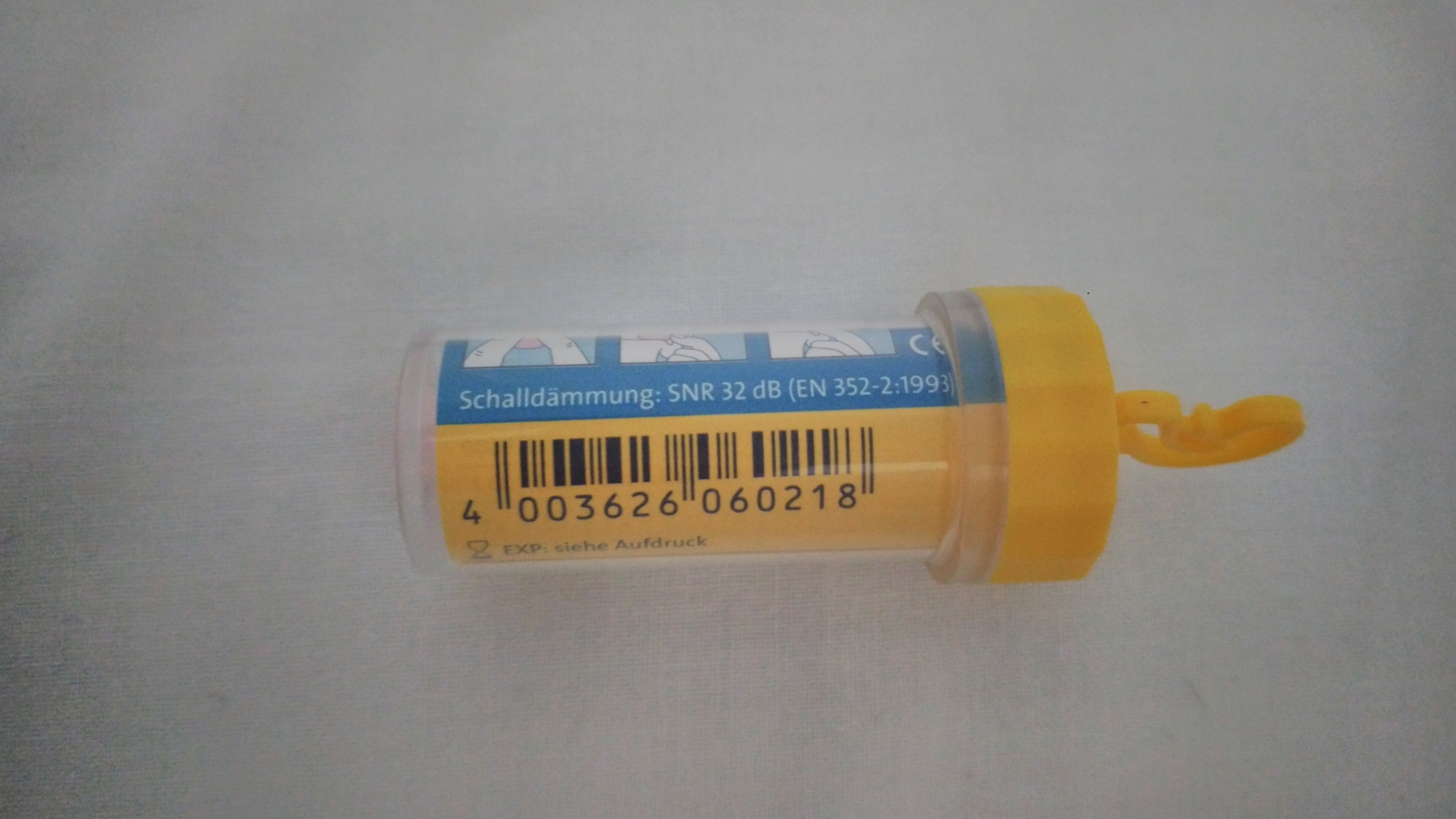 do note that it is specified at 1V output voltage and it is not specified into which impedance.
It is also very likely that at least one of the tubes crapped out in the 8 years of service.
Given the 14 and 3.5 Ohm output R of this model chances are the current Valhalla performs 'better' as there seems to be more feedback = lower distortion.

The tested amp, however, even the best channel is not something to write home about.
Not defending this amp nor the brand b.t.w. nor questioning the measurements.
Just sayin' the tested amp may well be broken (it clearly is in one channel anyway).
I reckon a second sample may be needed.
Last edited: Aug 5, 2019
People have a tendency to overestimate their hearing capabilities.
Use your ears to listen to music not as an analyzer.
B

Why even bother measuring this company's garbage? I think the point has been made. They generally make crap, and they're really not worth paying attention to. Others do a better job.
D

This was reviewed because someone took the effort to send it in.

I'm still holding out hope for some of Schiit's newer stuff like the Freya S, Saga S and the newer Ragnarok since they are now publishing their own measurements (linked at the bottom of each spec page).
M

beefkabob said:
Why even bother measuring this company's garbage? I think the point has been made. They generally make crap, and they're really not worth paying attention to. Others do a better job.
Click to expand...

What garbage?
There is no audible difference between the Valhalla and the Atom. Yes, the Atom has great measurements but who cares if you cannot hear it? 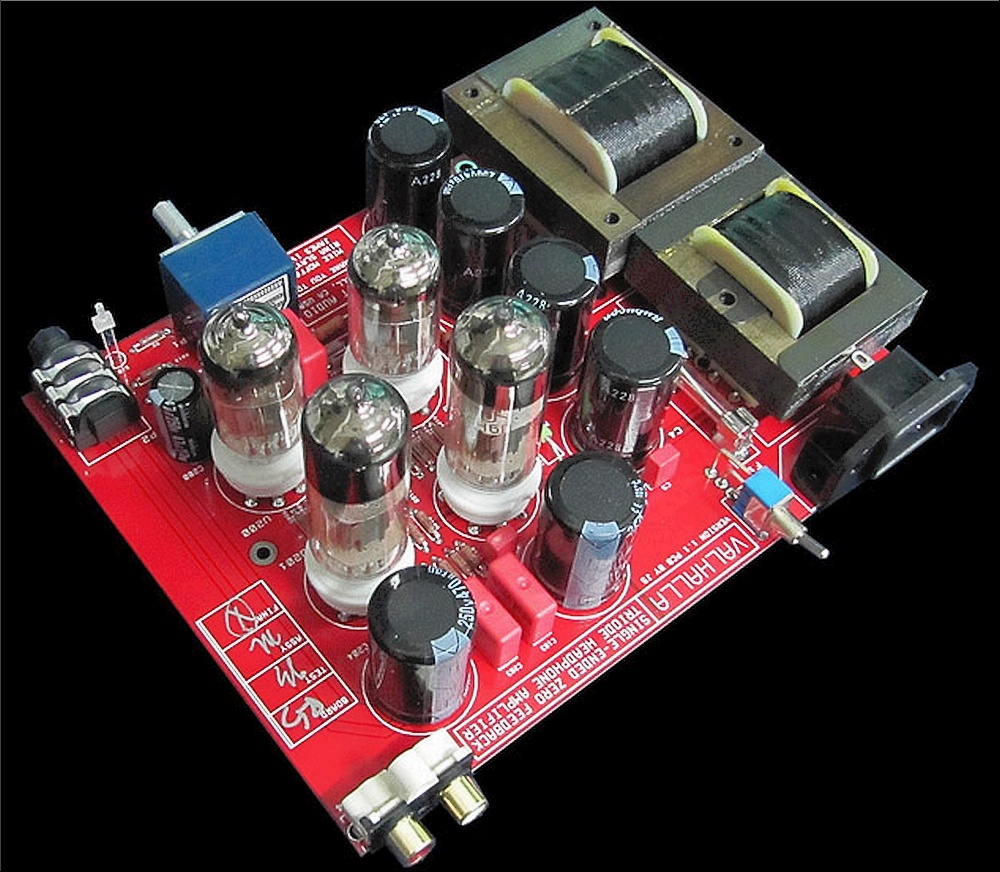 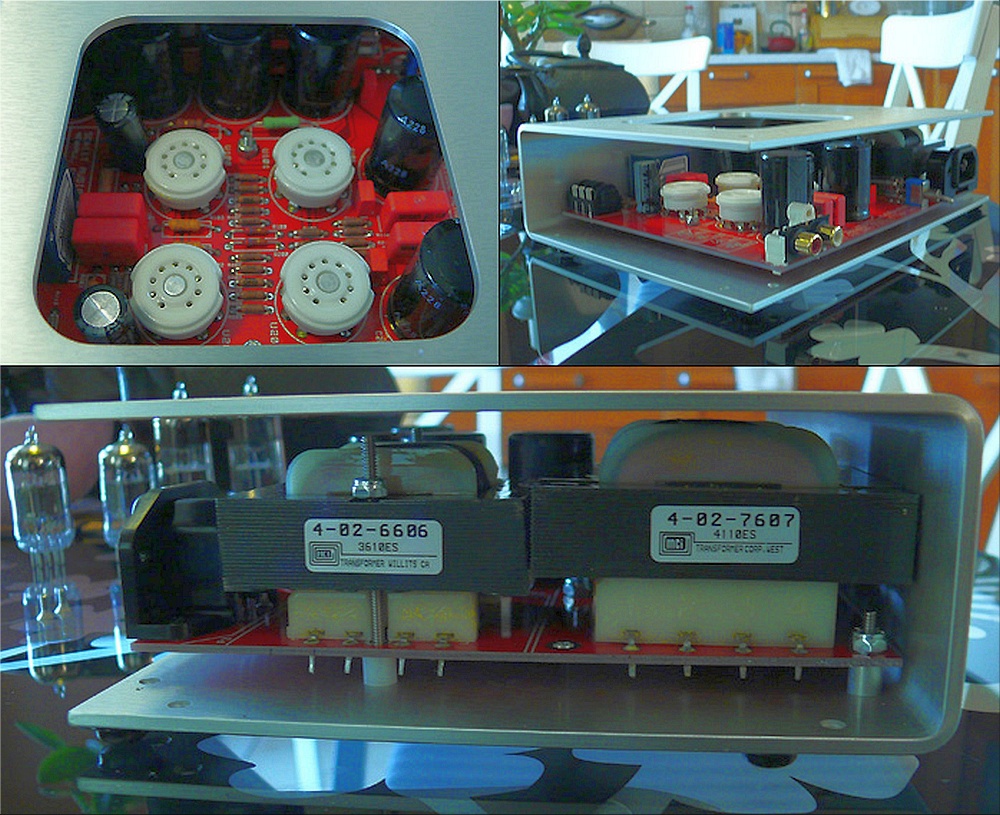 I guess the question is if you can hear no audible improvement going beyond the Atom, and given its high power, why spend more? I have an Atom and see no reason to spend any more if simply interested in sound quality. I would however pay more for an Atom in a lovely Accuphase or Luxman style case.
I used to fly, but I go the modern way now, by bus.

Hummm.... the transformers do not seem to be very well attached. 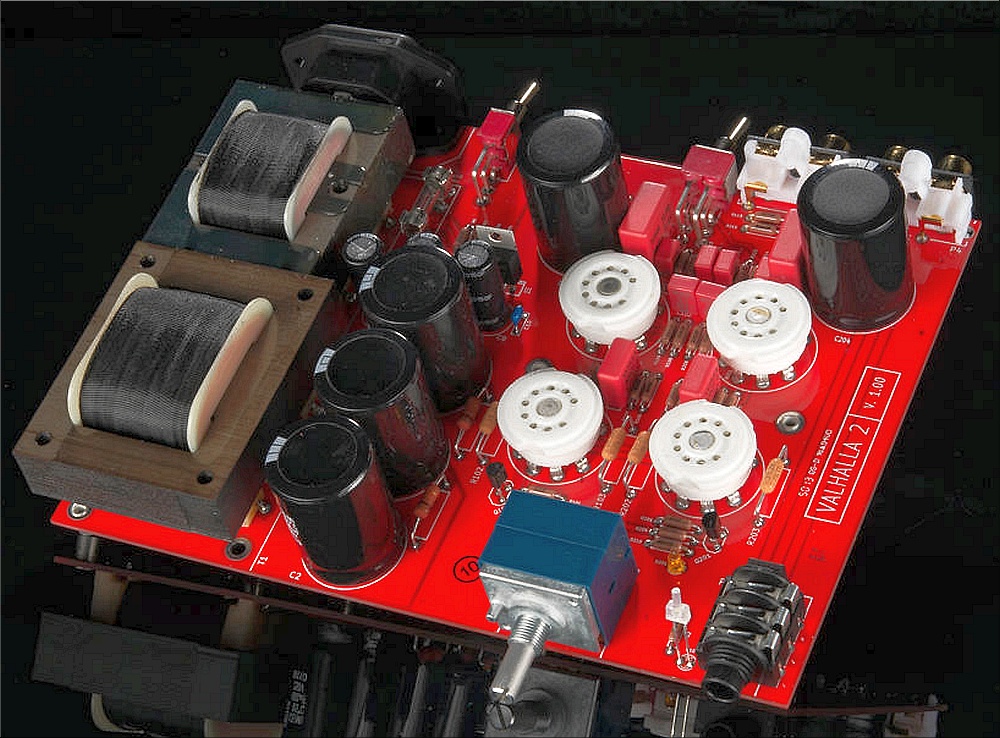 maty said:
Hummm.... the transformers do not seem to be very well attached.
Click to expand...

JJB70 said:
I guess the question is if you can hear no audible improvement going beyond the Atom, and given its high power, why spend more?
Click to expand...

That's only at high impedance. With low impedance headphones the Valhalla is total garbage.

I have no experience with the Valhalla but I did own a Vali 2 (before I discovered ASR, now sold). The midrange did sound "good" (i.e. euphonic coloration) especially with rock guitar compared to my Violectric V280 which is neutral. Looking at this review, maybe the Vali 2 is also plagued with the same 2nd harmonic as the Valhalla? When I rolled the tube to a JJ it got a lot more distortion, not sure if the JJ wasn't compatible or I just got a bad tube.

I do think maybe with a clear broken channel maybe this should have been investigated, and perhaps not published. The fact you come in around the spec in one channel means it may be working. But with tube gear with a few years on it, maybe not. Perhaps you should get a tube tester when you review second hand tube gear. It does seem fair to see the tubes are basically good on such units. I like the B&K Dyna-Jet 747 if you can find one, but there are other good choices.
"The real purpose of the scientific method is to make sure Nature hasn't misled you into thinking you know something you don't actually know." Robert M. Pirsig

Please no more audio-gd and Shiit gear pls, I dont pay for testing that garbage!

Thanks Amir for the review.
Did that piece of Schiit sound better or worse than the other one named totaldac?
You must log in or register to reply here.