This is a review and measurement of the Schiit Fulla DAC and headphone amplifier. It is the version 1 and is on kind loan from a member. If you are interested in V2/current version, I have purchased that, and the review will be forthcoming.

The Version 1 is a diminutive unit, a bit larger than the typical "thumb drive" sized USB DACs. It is made from folded metal like the larger Schiit products. 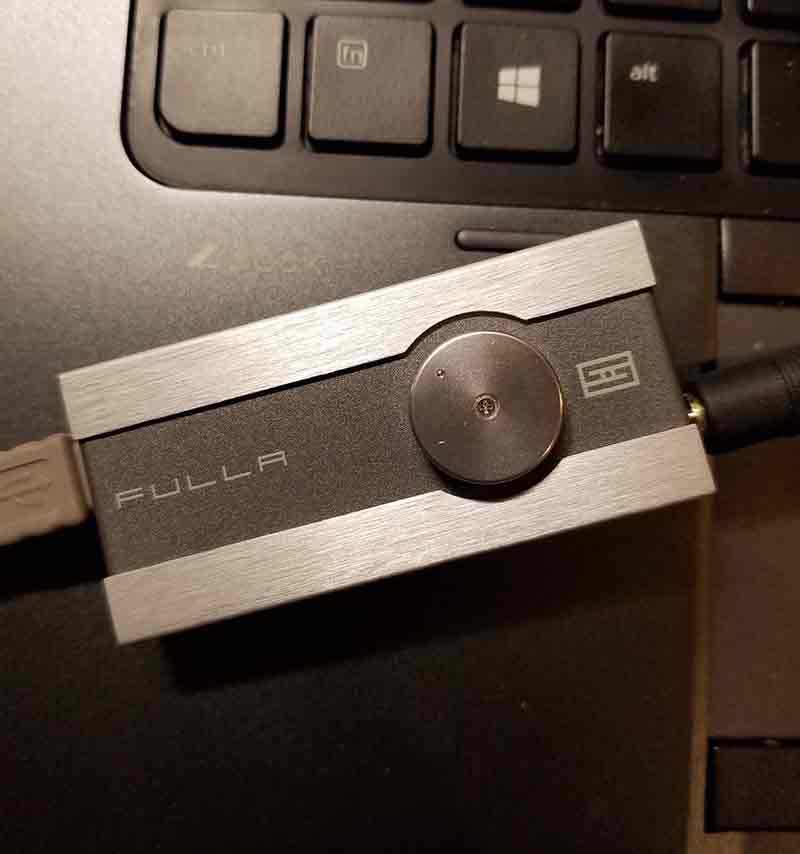 Format wise, this is an older DAC so limited to 96 kHz sampling rate as reported by Roon: 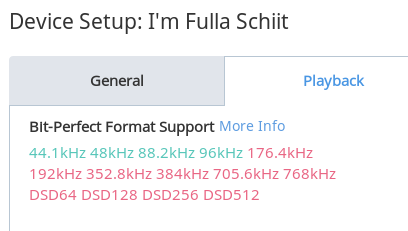 Yes, the USB identifier indeed says "I'm Fulla Schiit." Would be quite funny if the performance is great. Let's see if that is so in our measurements. If you are not familiar with my tests, I suggest reading my tutorial on audio measurements here: https://www.audiosciencereview.com/forum/index.php?threads/understanding-audio-measurements.2351/.

Measurements
All measurements are performed over only input over USB. The device is class compliant so I did not have to install any drivers to test it (in exclusive mode through Roon player).

I should say that this being an older device, I am limiting my measurements to a smaller subset of the usual. For comparison, I also show its performance against king of bargain USB thumb drives, Speaka (see https://audiosciencereview.com/foru...-speaka-usb-dac-and-headphone-amplifier.2423/), Audioquest Dragonfly Black and king of performance in this category, the SMSL Idea.

Let's start with jitter and noise with levels matched with SMSL Idea: 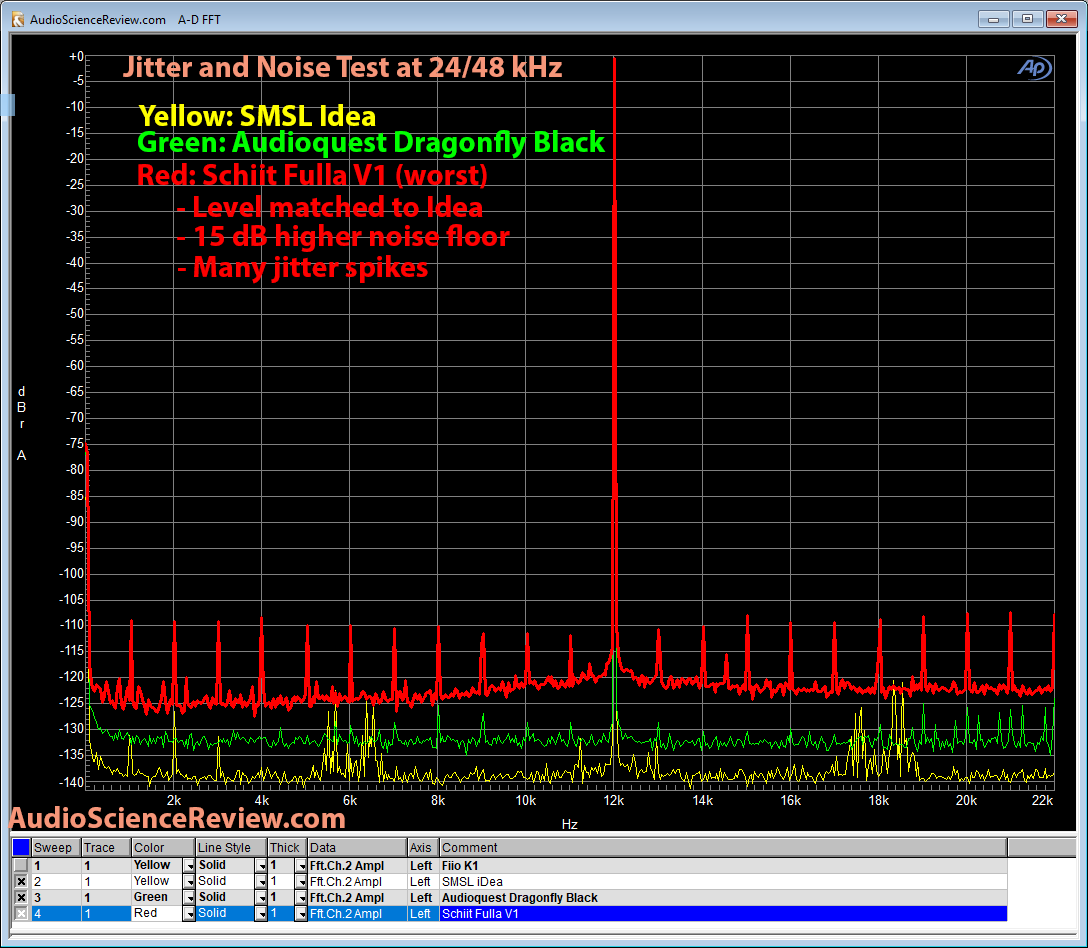 As we see, the Schiit Fulla is not competitive with competing products in this category. It has clear set of jitter spikes on 1 kHz boundaries (USB micro-frames?), and significantly higher noise floor. Fortunately the former is limited to -110 dB so not a big audible concern.

I have been asked to also show the results of this test at 44.1 kHz so here it is, comparing it to 48 kHz above: 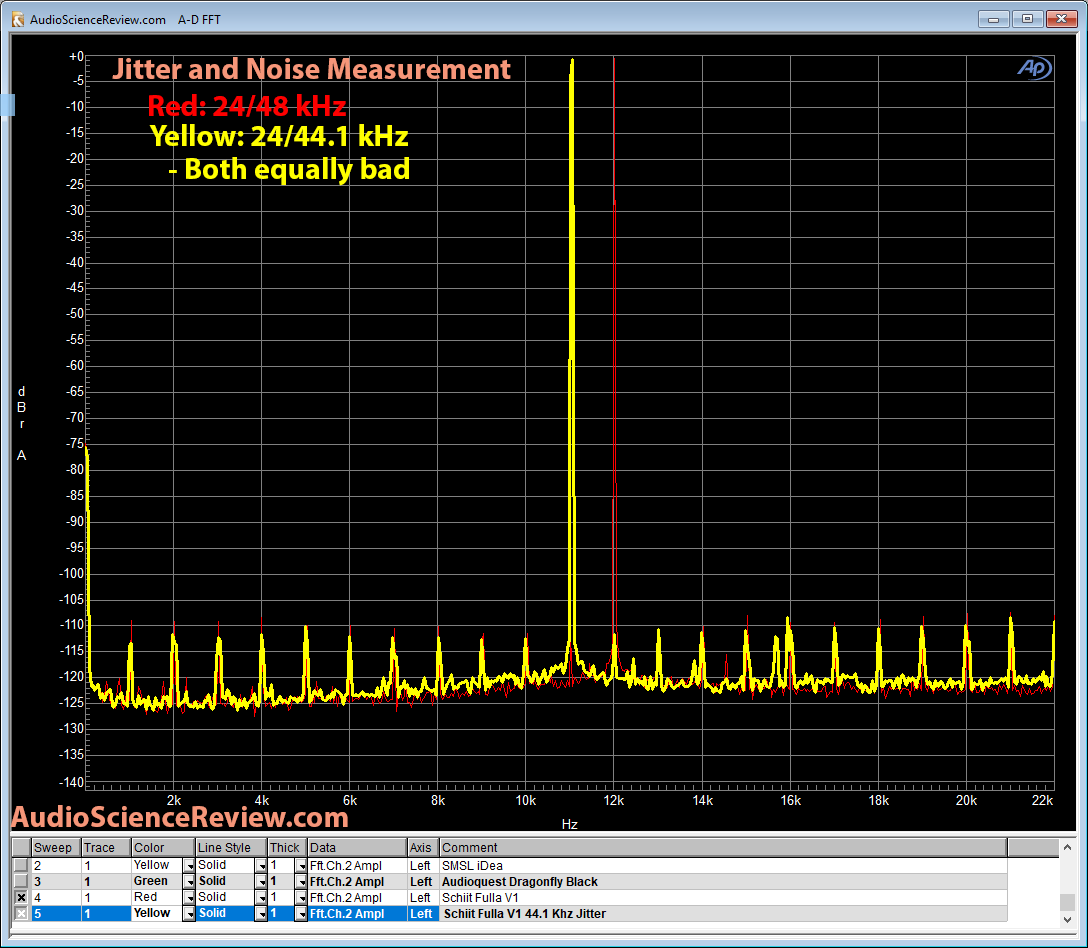 As we see, even though our main tone changes to a different frequency, the distortion/jitter/noise profile remains essentially identical. So there is no reason to test both sample rates.

Moving on, let's see how the -90 dB sine wave looks like as a test of linearity and noise: 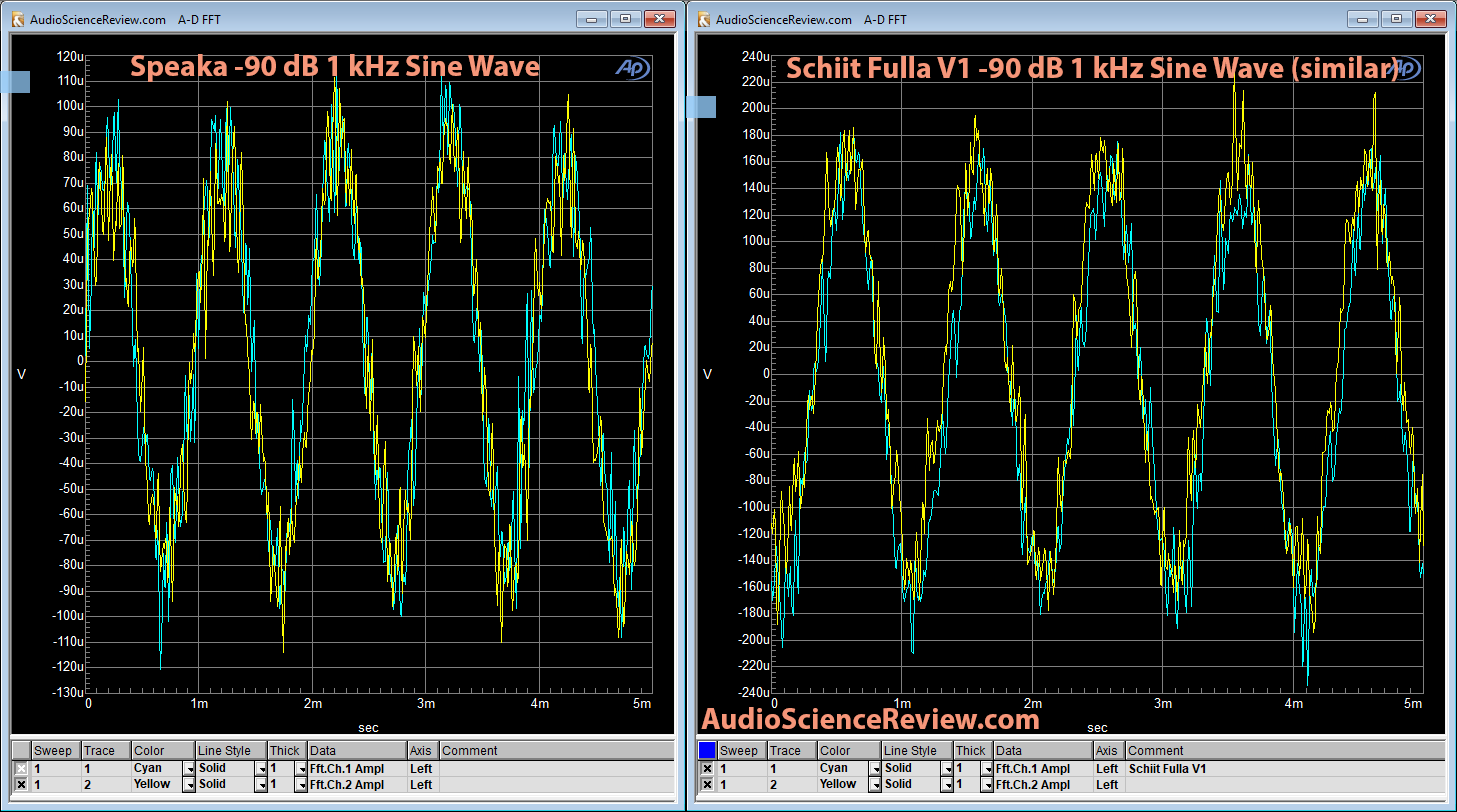 Here, I am giving the Schiit Fulla V1 an advantage with higher output level. Neither seems like a winner. Performance is OK but noisier than most desktop class DACs. 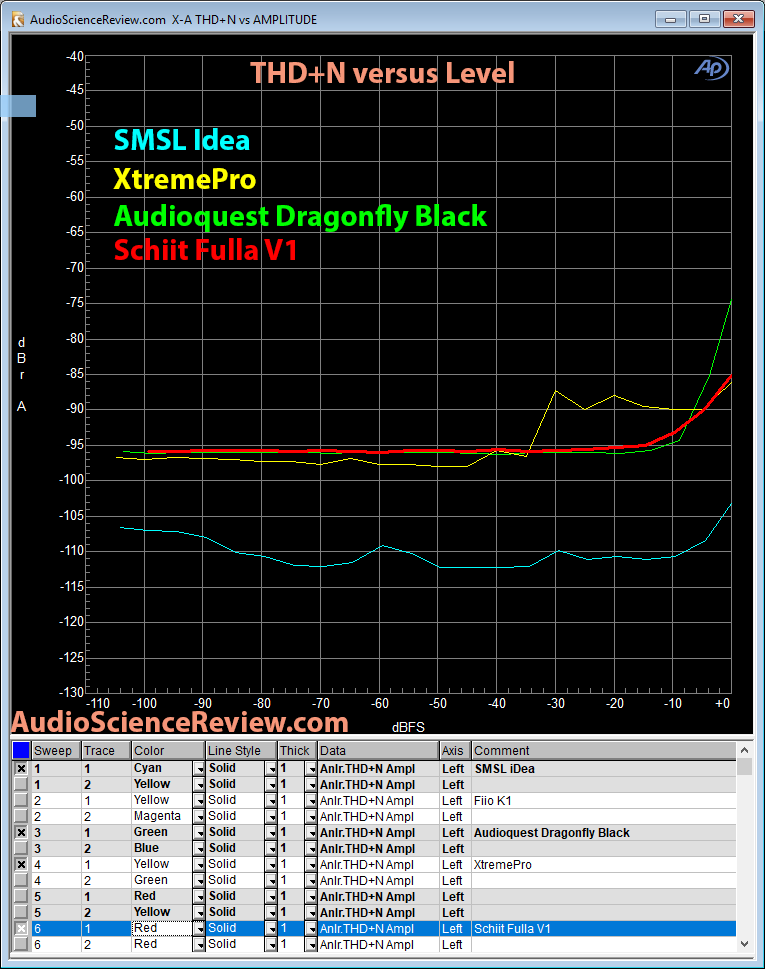 SMSL Idea wins by a good margin with the Schiit Fulla mixing in with the rest. 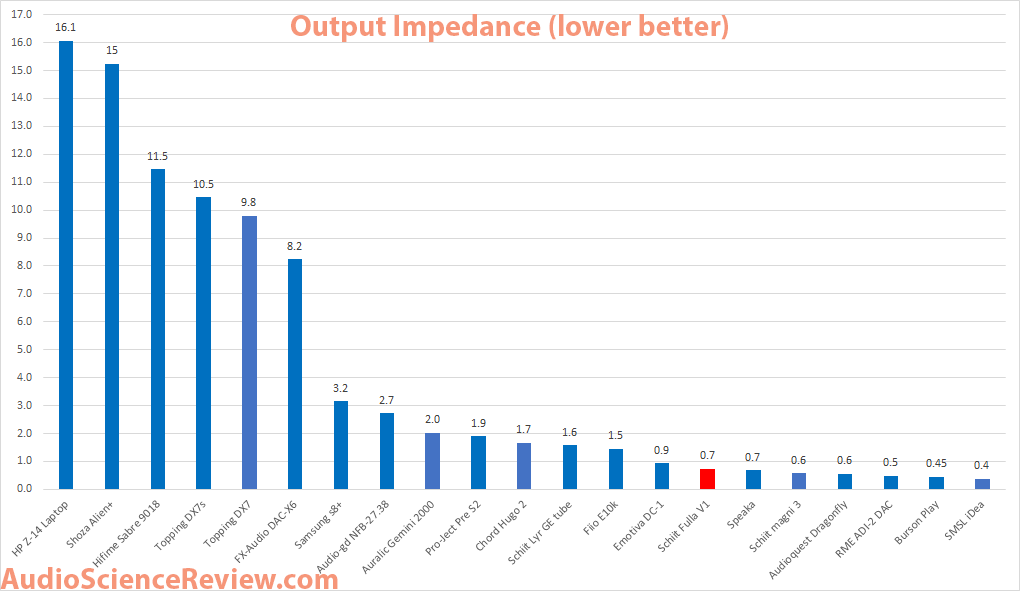 We get a nice 0.7 ohm impedance which is pretty good. This means the unit will not change the frequency response of your headphones.

Subjective Listening
I didn't bother comparing the unit to any other. Instead, I just listened to the unit. Using my Sony MDR-V6 headphones with the music on pause, the volume control was pretty scratchy. Turning it up and down would make a clear static sound as the wipers moved. Switching to Sennheiser HD-650, I could not hear it anymore.

Listening to my reference clips, the Sony MDR-V6 sounded quite satisfying. There is plenty of power to drive them. Switching to the high impedance Sennheiser HD-650, the sound became anemic with barely enough power to drive them. This is not atypical for this class product.

Conclusions
The Schiit Fulla V1 DAC and Headphone amp follows the same well travelled path as other Schiit DACs I have tested. Measured performance in critical tests such as Jitter and Noise is simply not competitive. Better job can be done even if it is hard to make a case for the differences being audible.

On the other hand the volume control as small and cheaply made as it is, is quite handy to have. Most USB thumb drive DACs either don't have volume control or have some kind of up/down digital control.

From subjective front, listening with more efficient/lower impedance headphone is quite pleasant. So if that is what you have and can find this unit on the cheap in second hand market, you won't see me hounding you for purchasing it .

Another test for you: with these amps, make a quick check of the DC output level - should be zero of course. In fact, with all DACs and amps, an extremely important characteristic (as far as I am concerned) is the behaviour at power-off and power-on. Large 'thumps' could damage headphones or blow up speakers. A well-designed device will avoid these problems under any circumstances - it isn't necessarily a trivial problem to solve. Otherwise, you might get something like this:


Click to expand...
http://nwavguy.blogspot.co.uk/2011/07/banned-at-head-fi.html
Last edited: Apr 16, 2018
Digital audio is a rare example of perfect technology; it has given audiophiles everything they wanted. But now they're bored...

Pardon me if this is a question you've answered elsewhere. How do you run the J-test signal into the DUT? Via the AP addressing the device's ASIO driver directly or is it a standalone .wav file played via a player like foobar or JRiver? Or...?
"Evasions of the obvious can become very complex.”
― Thomas Sowell
F

@amirm
can you check the channel balance with the volume pot at different positions?
G

I thought that was a very balanced review. Thank you Amirm. Now you've reviewed DAC line but the Gungnir multibit.It's interesting to see that the Fulla does a better job at -90 db than a Bifrost MB does. I also liked that you included your subjective impressions and posted about the impact of the measurements on them. Would be nice to see the power output of the headphone amp.
OP

SIY said:
Pardon me if this is a question you've answered elsewhere. How do you run the J-test signal into the DUT? Via the AP addressing the device's ASIO driver directly or is it a standalone .wav file played via a player like foobar or JRiver? Or...?
Click to expand...
The latter. I run my media player, Roon, in "bit-exact" mode and play the test file. Then move to AP software and run the spectrum analysis.

You could use the ASIO interface in your AP to do the same. But you would need to install ASIO drivers which I prefer to not do.

One advantage of using my regular media player is that to the extent there is sensitivity to what the PC is doing, then the work profile is the same as when I play regular music.
Amir
Founder, Audio Science Review
Founder, Madrona Digital
Contributing Editor, Widescreen Review Magazine
Click for My Technical Background
My YouTube Channel
OP

mindbomb said:
@amirm
can you check the channel balance with the volume pot at different positions?
Click to expand...
Yes, I will do that and power measurements. I started the test late at night and didn't have time to run more.
Amir
Founder, Audio Science Review
Founder, Madrona Digital
Contributing Editor, Widescreen Review Magazine
Click for My Technical Background
My YouTube Channel

I likely wasn't clear. As I mentioned in the Request thread, I usually use the ASIO function of the AP for its output, which works perfectly with the Behringer, M-Audio, and Scarlett ASIO drivers, but crashes hard with the CEntrance driver. In order to get some basic data for my AudioXpress review, I had to do a multicomputer kludge, and still couldn't do sweeps because I had to rely on prerecorded test signals.

To be fair, for its intended use, the CEntrance driver works fine (no issues with foobar or J-River, my usual players), so I was curious about whether is was specific to the APx500 software or if it had the same issue with the software in your 2722.
"Evasions of the obvious can become very complex.”
― Thomas Sowell
OP

SIY said:
To be fair, for its intended use, the CEntrance driver works fine (no issues with foobar or J-River, my usual players), so I was curious about whether is was specific to the APx500 software or if it had the same issue with the software in your 2722.
Click to expand...
My software cannot use the PC as the generator at all so it is not an issue there. I have no choice but to perform asynchronous operation with it.
Amir
Founder, Audio Science Review
Founder, Madrona Digital
Contributing Editor, Widescreen Review Magazine
Click for My Technical Background
My YouTube Channel
OP

Alright. Took fair bit of work but I managed to port my S/PDIF power measurement to USB. Here are the results: 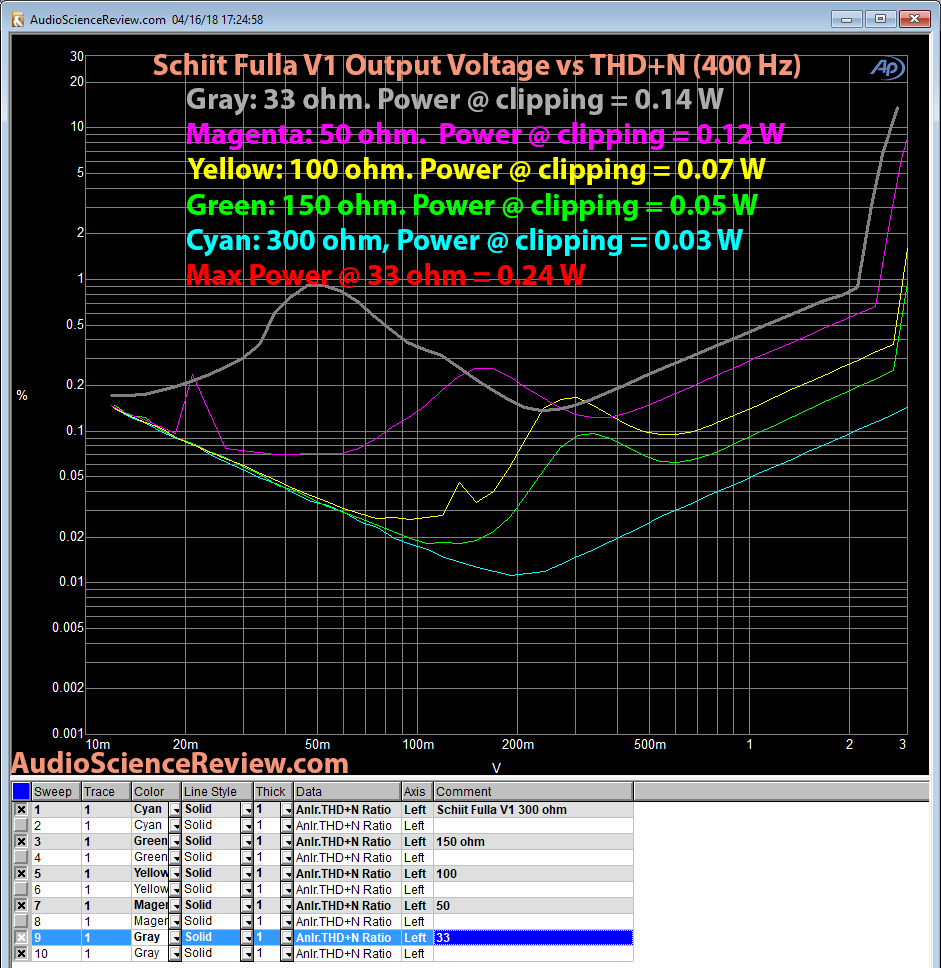 Absolute maximum power is 224 milliwatt. That's at nearly 14% distortion so I don't think you want to use it that way. Schiit rates the output at 200 milliwatt @32 ohms. Without clipping but at nearly 1% distortion I get 140 milliwatts. So their truth hangs somewhere between these two extremes. My measurements are with both channels driven by the way.

Overall distortions are fairly high but considering the little device we are dealing with (and lack of data otherwise at this point), I guess it is not too bad. Here is the RME ADI-2 DAC at 10X for a refresher 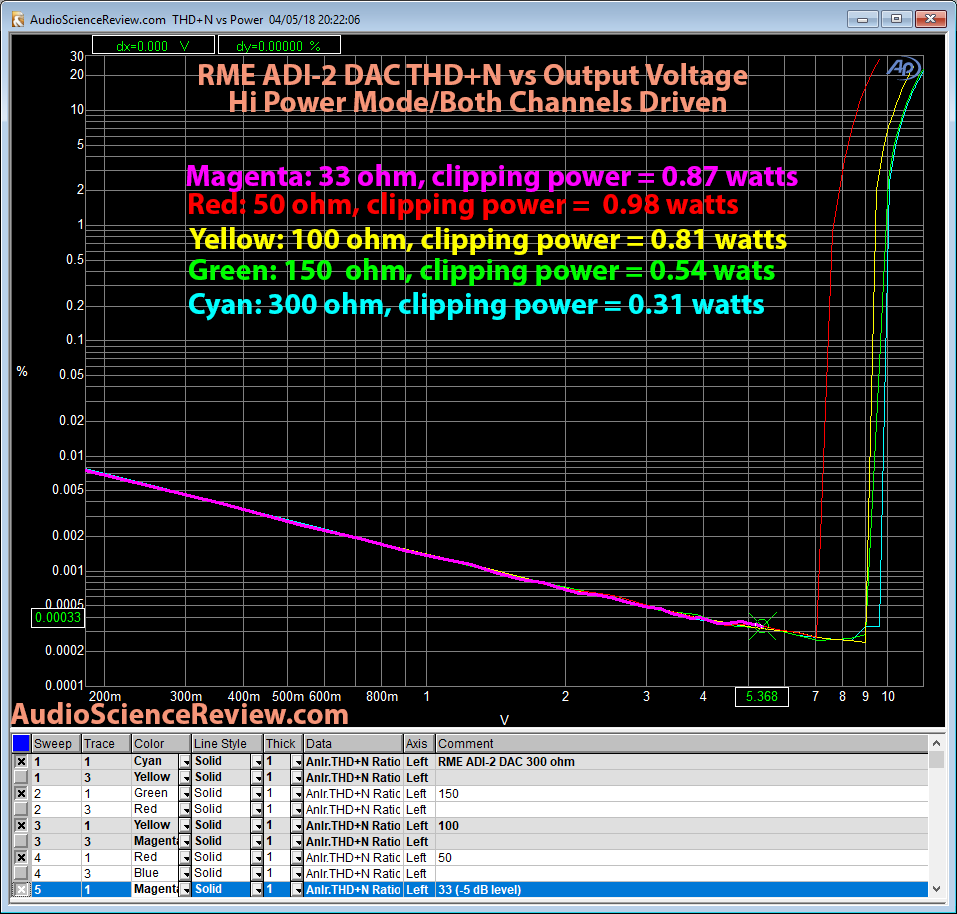 Quite a bit cleaner as it should be.
Amir
Founder, Audio Science Review
Founder, Madrona Digital
Contributing Editor, Widescreen Review Magazine
Click for My Technical Background
My YouTube Channel
OP

And here are the channel balance measurements:

At max volume, there is no imbalance. As I reduce the volume, we get this: 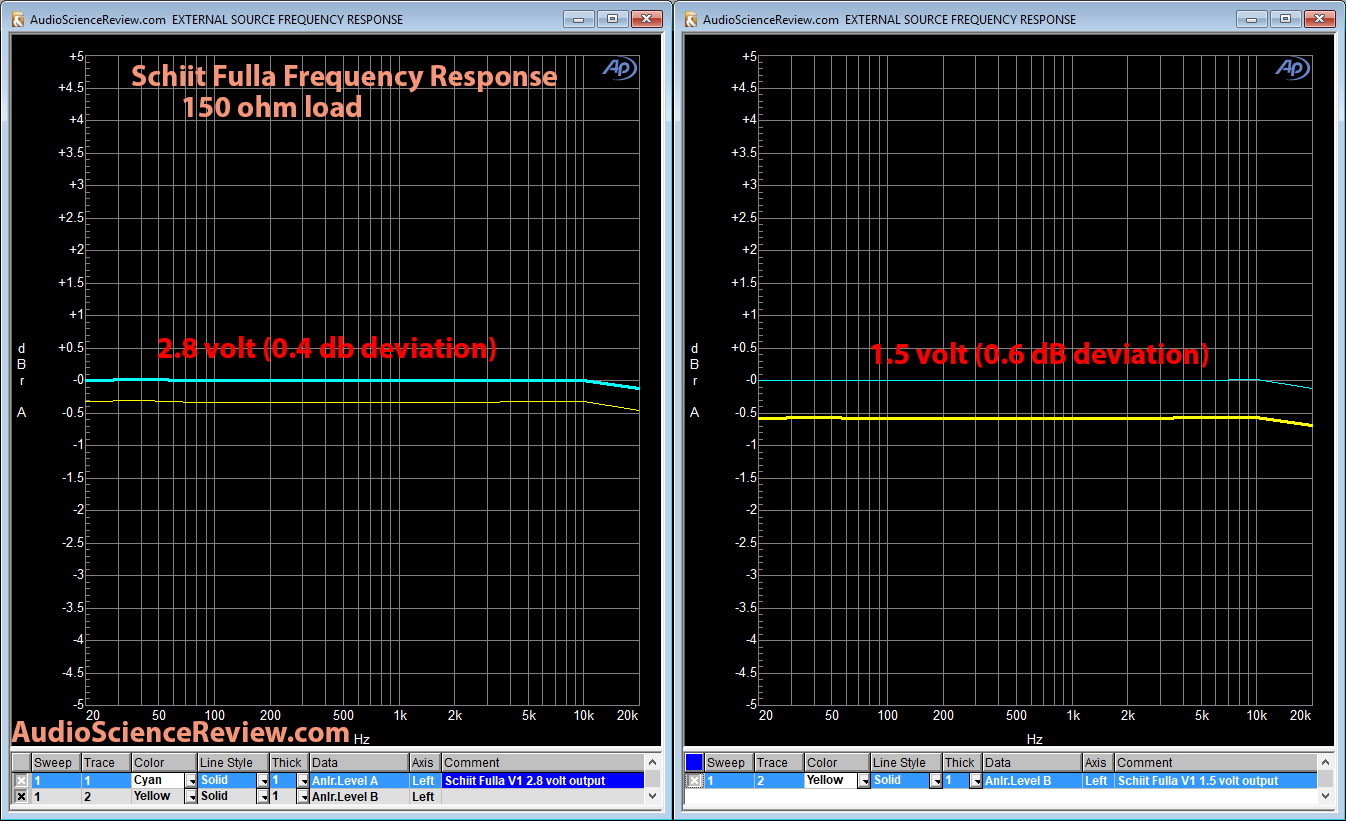 We see a growing deviation. With lower volumes still, we get: 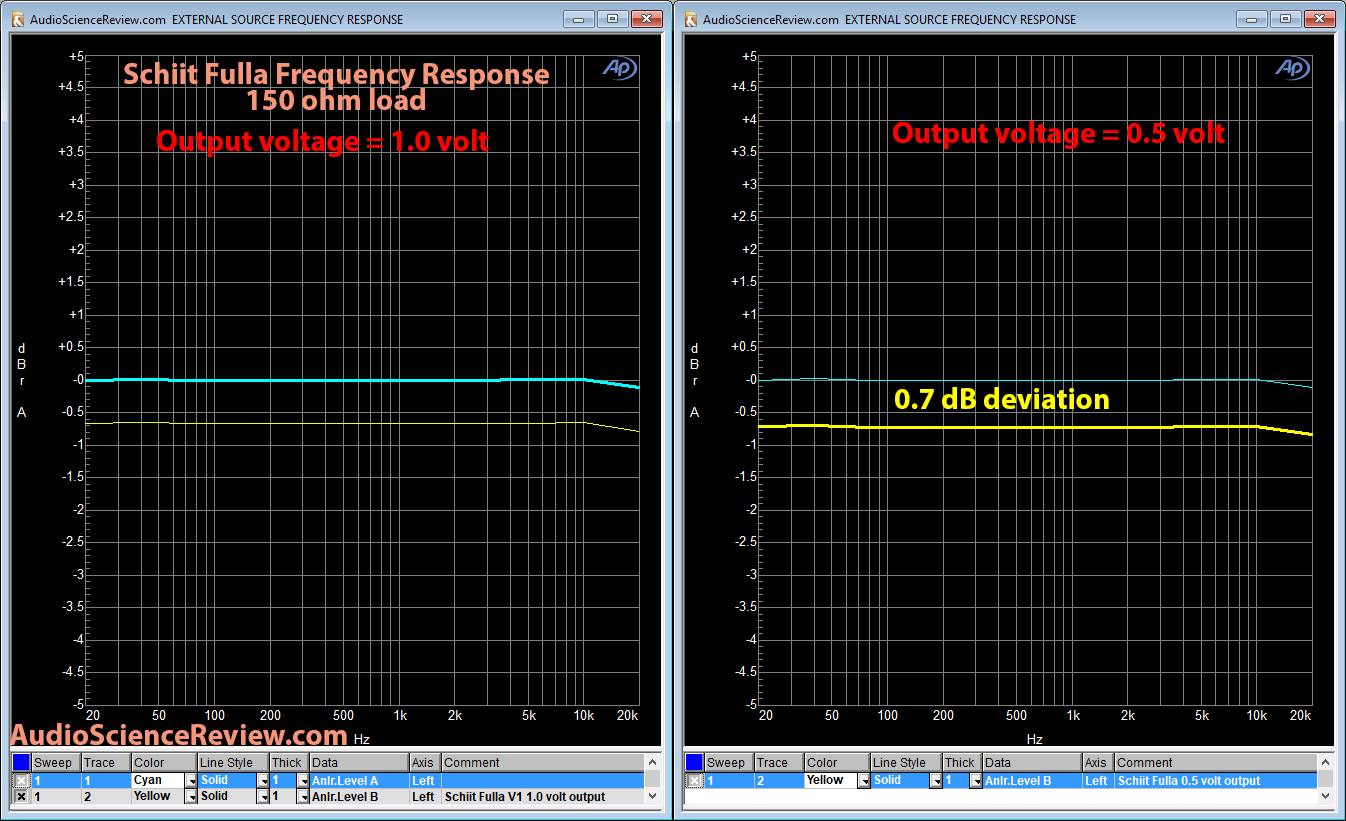 One kind note guys: on USB devices for now, the process of getting data is pretty time consuming. So unless you really need more information, it would be good to spend my resources on measuring other devices than digging more into the current ones.

Very nice work, Amir, but I can't see why you keep wasting your time on that Schitt... Definitely agree with moving on to better things.
Don
"After silence, that which best expresses the inexpressible, is music" - Aldous Huxley

DonH56 said:
Very nice work, Amir, but I can't see why you keep wasting your time on that Schitt... Definitely agree with moving on to better things.
Click to expand...
I was thinking the same thing. miniDSP is begging to be measured, IMHO.
Monoprice HTP-1 => LCR: JBL708P + [Rythmik FM8 x2] + Rythmik F12, Surrounds: JBL Stage A130
M

amirm said:
The deviation keeps going. I stopped here as the volume is pretty low at this point.
Click to expand...
Isn't 500mv still pretty high? I was hoping to see what -30db and -40db looked like.
OP

Thanks for another good and illuminating review.
M

amirm said:
It is 1.6 milliwatt since it is at 150 ohms.
Click to expand...
i have an hd6xx, and on my headphone amp atm, I have the volume pot set for peaks around 150mv (for when I was browsing youtube). A small amp like the fulla might be used with lower impedance headphones, and then would have to go lower still, like 50mv. Poor channel balance there would be really annoying for everyday usability.

And then there is iems, which would need even lower voltage than that.
Last edited: Apr 17, 2018
OP

OK, here is the response at 0.25 millivolts: 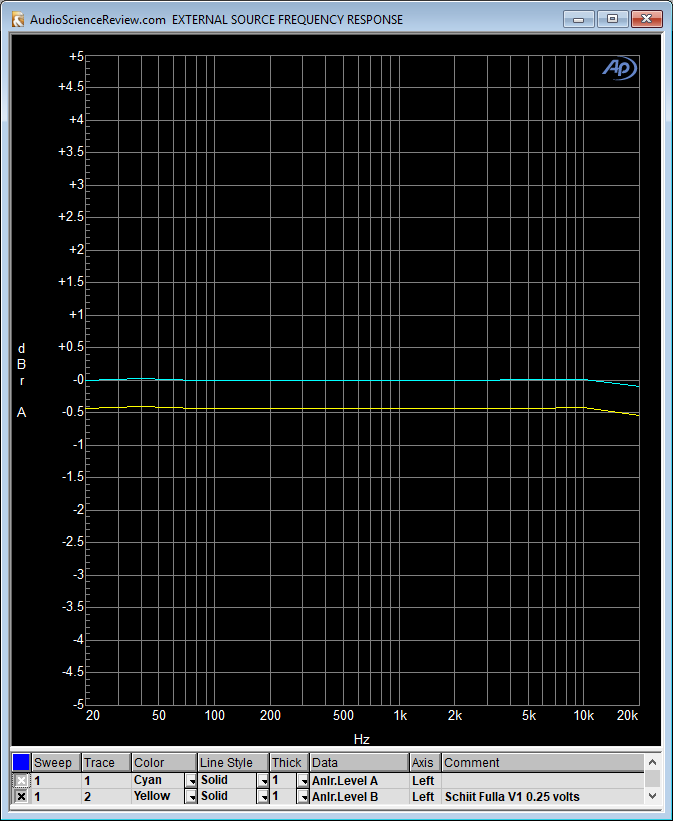 Tried to go below that but now Roon keeps failing to talk to it. I set it to polling method and it still stutters and Roon stops.
Amir
Founder, Audio Science Review
Founder, Madrona Digital
Contributing Editor, Widescreen Review Magazine
Click for My Technical Background
My YouTube Channel
You must log in or register to reply here.
Share: Facebook Google+ Reddit Pinterest Tumblr WhatsApp Email Link