FrantzM said:
Same Here!! Now if they could re-Drop it. Any other way to acquire this gem?
Click to expand...
Just go Massdrop to request. Once they hit a critical mass number, they will re-open the drop.

Its pretty standard on almost all their popular stuff.
J

amirm said:
You bought two??? No wonder there is a shortage.

I agree. For its performance, it has a very reasonable price.
Click to expand...
Amir - based on your experience in measuring amps, what would you say the best performing amp is for $500 or less? Best if has both SE and balanced outputs, but since price/value will probably be very different, what about best SE only, and best SE and balanced combo?

maxxevv said:
Just go Massdrop to request. Once they hit a critical mass number, they will re-open the drop.

Its pretty standard on almost all their popular stuff.
Click to expand...
I just did, there's more than 600 requests at the moment
R 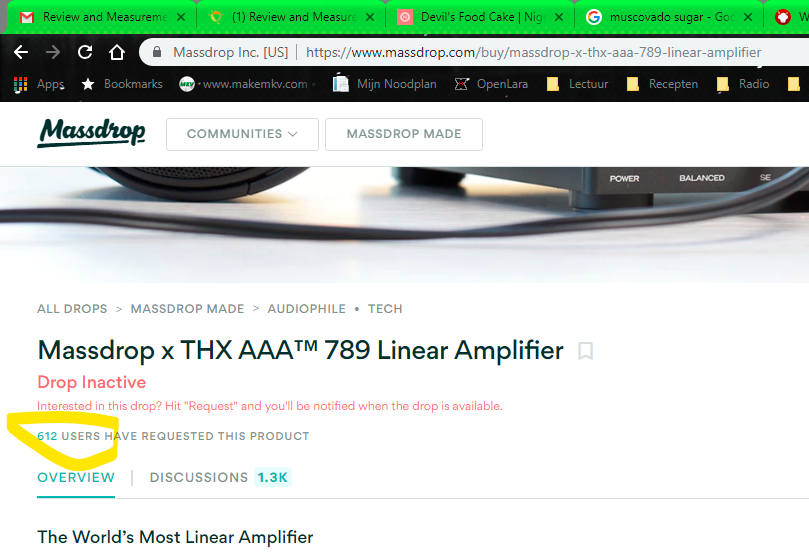 maxxevv said:
Just go Massdrop to request. Once they hit a critical mass number, they will re-open the drop.

Its pretty standard on almost all their popular stuff.
Click to expand...
They will make it to regular item eventually. I think they're just making use of these "one-time drops" to start manufacturing and stocking it, so that when it turns into a regular drop it will be available immediately.

at least that's my impression from SDAC

The 2800+ are the cumulative requests from across the last 2 drops that have completed and further requests (including the 600+) since.

They probably display different for different parts of the world. I only see the 2800+ numbers.
C

Regardless hopefully it drops again soon.

@amirm, can you please test THD vs power level with a lower load on the balanced output (16 ohms, and maybe lower) ?
I would be curious to see how this amp react when the current limit hits.
waveTracing | rePhase
M

im glad i ordered 2 also. but the first one i got has some power button issues. and a few others over at head fi say the same thing. also the gain knob on my first one is not centered at all. on I its more like II and then the second detent at what should be II is almost at III. i mean it clicks at each detent but its annoying lol. im pretty sure i read a response at one point where cee tee had said they will re drop them again. if they do i may even grab a third for the office. im considering the monoprice unit but im not sure if i really want the dac built in or not a decent price though for the combo unit.
F

Just waiting for this drop and nabbing it ... Not that I need one more headphone amp or DAC but ... We can all indulge a bit..

I notice them mentioning the ASR review . Long Live The King!! ..... and His Followers ... 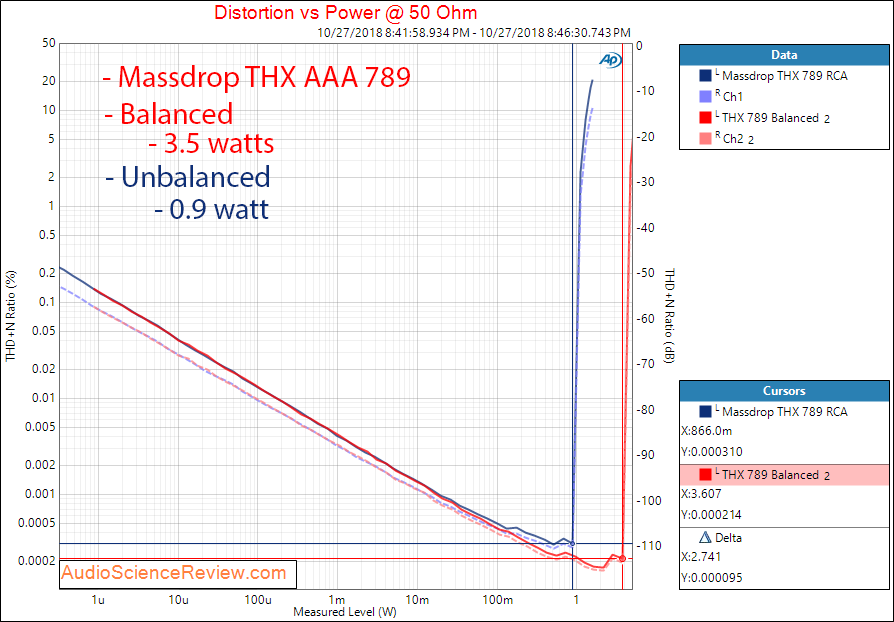 "You simply get copious more power at whopping level of 3.5 watts before clipping." >> the lines fall on top of each other until SE clipping point, so as long as you don't run out of headroom, SE performance is identical.

He has no balanced headphones right now so the subjective testing was all done via SE (as well as the khadas tone board input, connected via SE), showed no audible distortion whatsoever.
Click to expand...
No man, I meant sinad, thd, dnr.

It does say on the manual that comes with it that single ended performance is worse.
The question is how much worse.

maxxevv said:
That is some awesome headphone amp there! Thanks again for the great work. Makes me really interested in the Monoprice one with the dual AKM chips now ...

They can be bought readily.

It does say on the manual that comes with it that single ended performance is worse.
The question is how much worse.
Click to expand...
Confirming, when you say single-ended, you mean RCA inputs and not the headphone out?
Amir
Founder, Audio Science Review
Founder, Madrona Digital
Contributing Editor, Widescreen Review Magazine
Click for My Technical Background
Master List of Audio Reviews
C

What about the imd smpte performance？
T

The Monoprice unit states dual THX AAA 788 amps. Same as the Massdrop '789' ? The real question is the implementation of the dual AKM4493 chips. As amirm has shown in many tests, just having a name DAC chip does not mean automatic success. The components upstream and downstream from the chip are just as important. However at the price of $479.00 against $499.00 for a DX7s this is very attractive. Can't wait for a review.
I think Topping choosing a AKM chip for the DX3Pro might give a clue to future Topping products. What could Topping do with the THX chips?

Speaking of Massdrops long lead times, and yes I have waited too, remember the very contested R-2R DAC from back in, what, July? Those folks are still waiting for first shipment! Now that would be a DAC for amirm to test.
You must log in or register to reply here.
Share: Facebook Google+ Reddit Pinterest Tumblr WhatsApp Email Link