Review and Measurements of LOXJIE d20 DAC and Headphone Amp

This is a review and detailed measurements of the LOXJIE d20 DAC and headphone amplifier. It is on kind loan from the company. If you have not heard of LOXJIE, it is a spin off from SMSL with colorful designs. The d20 is their first dac and retails for USD $270 including prime shipping. It uses the currently top of the line AK4497 DAC chip from AKM. So in theory it should have excellent performance.

The d20 comes in either blue or red colors. I have the red: 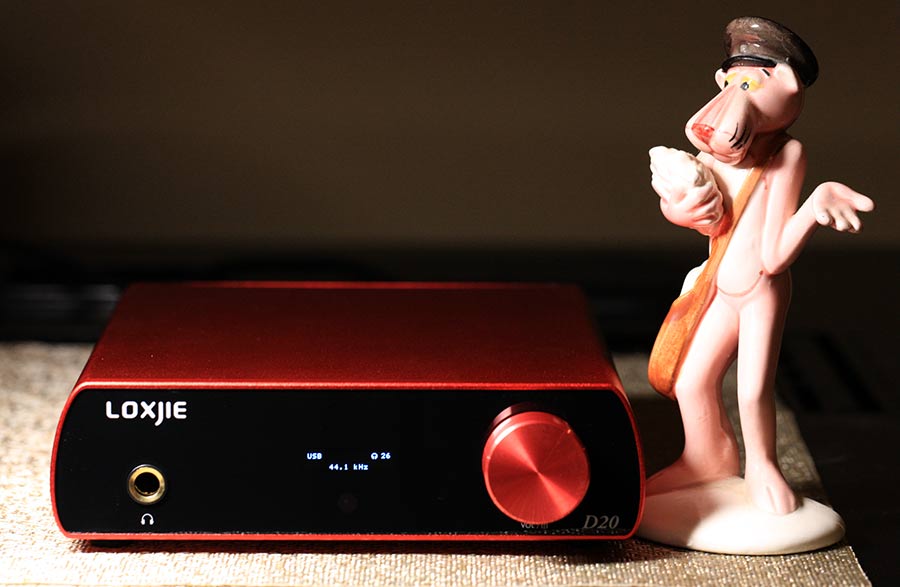 Somewhat unusual for these DACs, it includes an AC mains power supply so there is no external dongle. As you can see from the front panel it has a 1/4 inch headphone jack and the signature, tiny display from SMSL. While I am appreciative of the inclusion of the display, the size is just too small from aesthetic point of view let alone usability. I see the economy of using a small display and reusing it in many designs but wish that SMSL/LOXJIE would go to the next size up.

The d20 comes with a remote control (which I did not use). The navigation of using the unit itself was quite intuitive with the pushable knob. WIthout the remote though, switching between headphone out or line out requires multiple steps so the remote is recommended for that use. Note that there is no mode to output to both jacks at the same time.

There are the usual selection of filters for the DAC. I left it as default sharp roll off. There is also a strange selection for sound manipulation called current MIN, MID, and MAX. I did not play with it much other than confirming that it made no improvement to the distortion measurements. It is not documented as to what it does.

Let's get into the measurements and see how she does.

Measurements
As usual we start with our dashboard view: 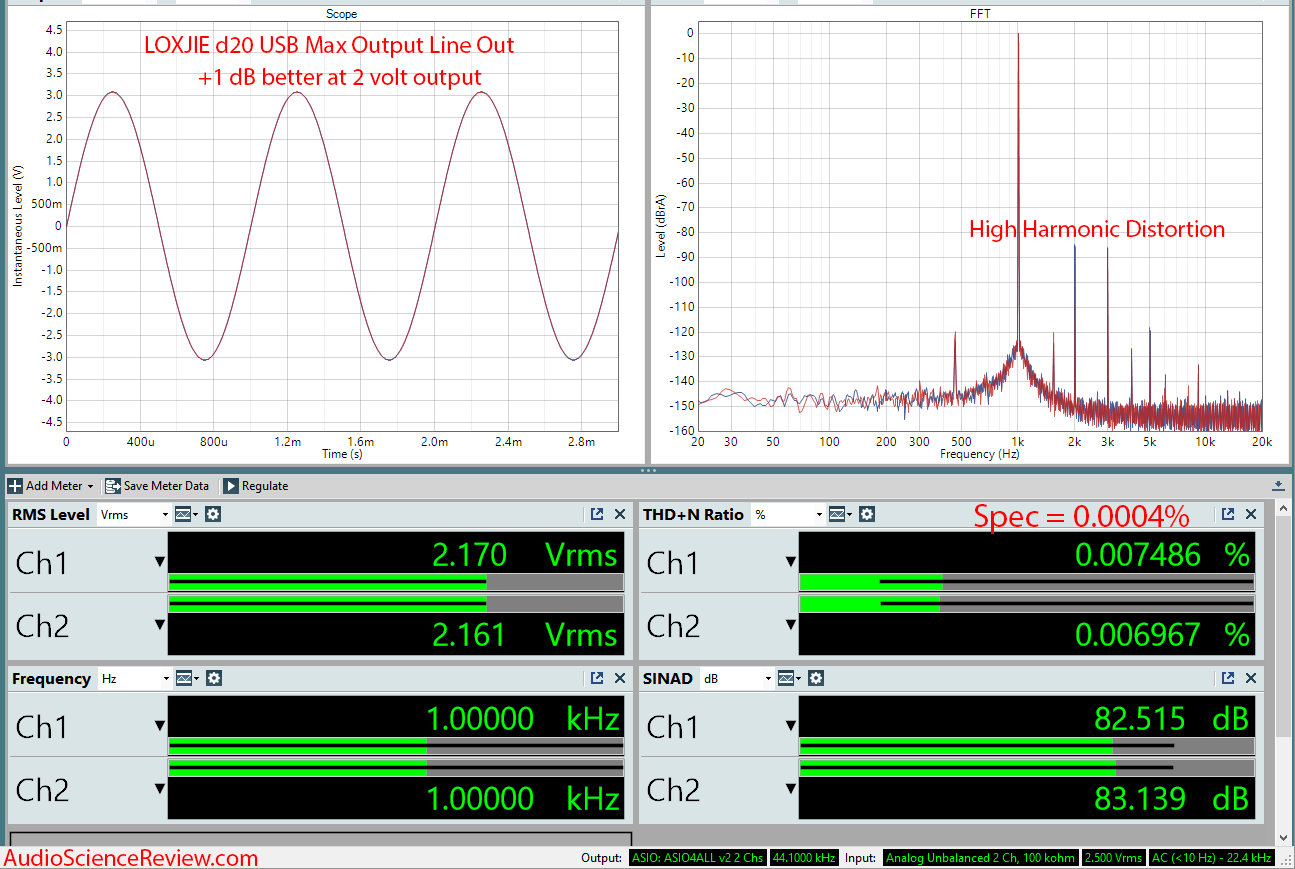 Now, that is a punch in the face. The output voltage of 2.1 volts is healthy and a bit higher than nominal 2 volt we expect to see. But what is up with such high distortion? Second and third harmonics are way up for a DAC in this class resulting in pretty poor SINAD (signal over distortion and noise) of just 83 dB. Reducing the output level to 2 volts improved things just a hair. Going way down to 1 volt output made things better (close to 90 dB SINAD) but still pretty poor.

LOXJIE specs the unit as having 0.0004% distortion. We are getting 20X higher at nearly 0.008%. For headphone out they have much worse rating close to what we are getting so perhaps some design revision has impacted these measurements? If I were to guess I would say it is the output amplifier that is causing the high distortion. They advertise it is designed using "transistors" which means it is a custom design of their own.

Predictably then, the LOXJIE d20 makes a very poor showing when compared to other DACs: 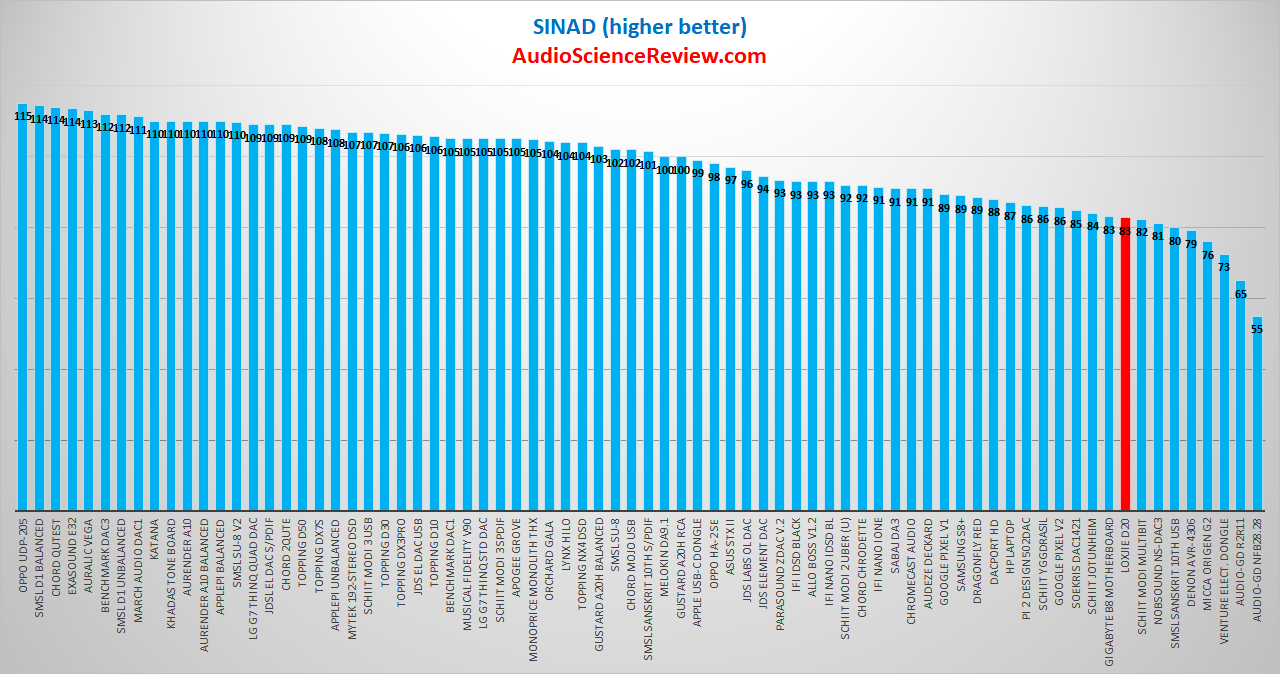 It lands the forth and worst quarter of the units tested, landing right next to my PC motherboard DAC!

The predictive power of the dashboard is quite high and we see that in follow up measures such as the intermodulation distortion: 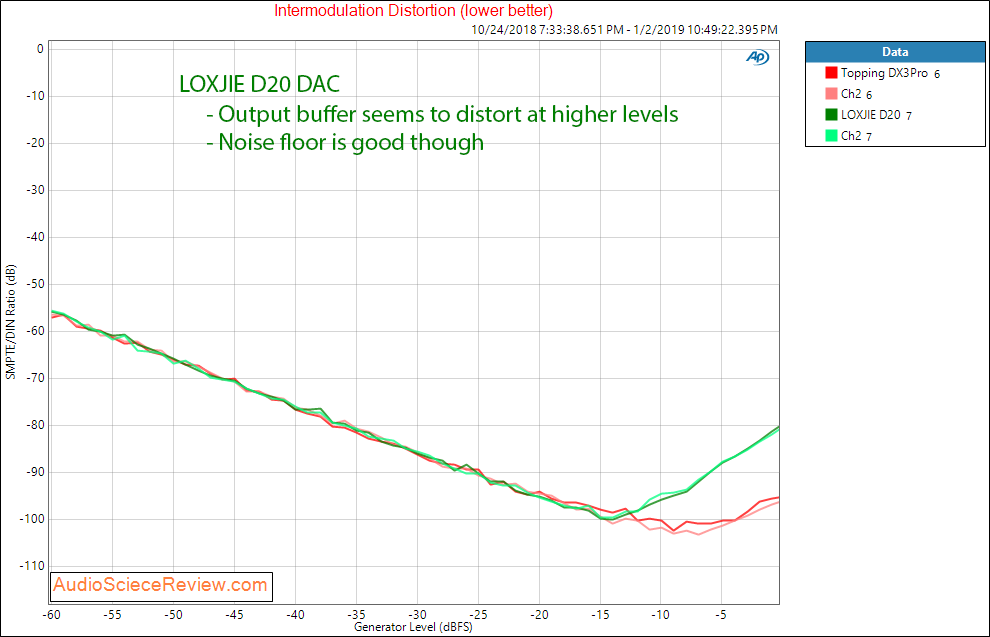 All is well when we are in the downward portion of the curve where noise dominates due to small magnitude of our signal. But then distortion takes over at -15 dB and climbs high.

The jitter spectrum shows that the digital values can impact the output of the DAC: 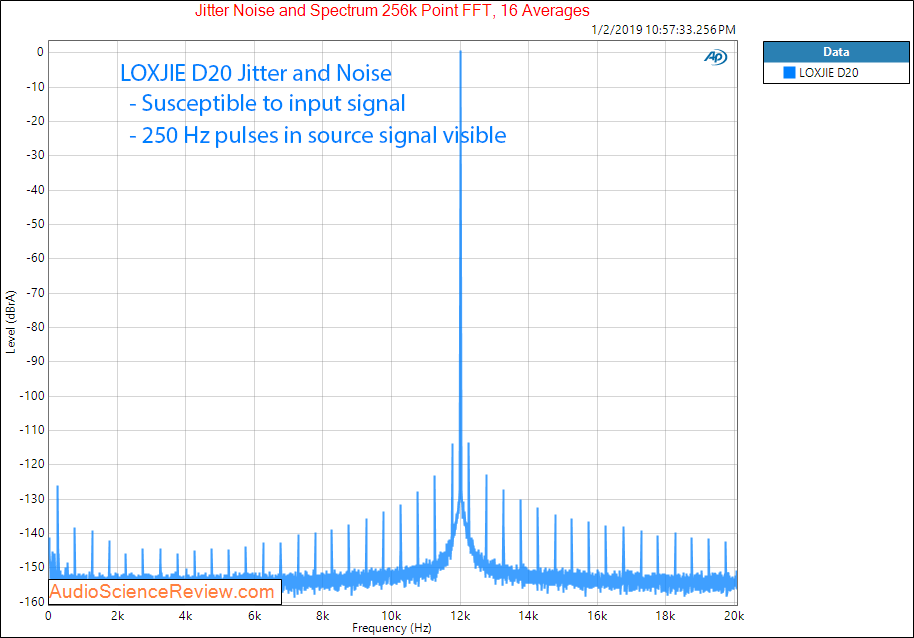 None of those vertical spikes other than the main one at 12 kHz should be there. Fortunately they are not audible.

Linearity is good but not perfect: 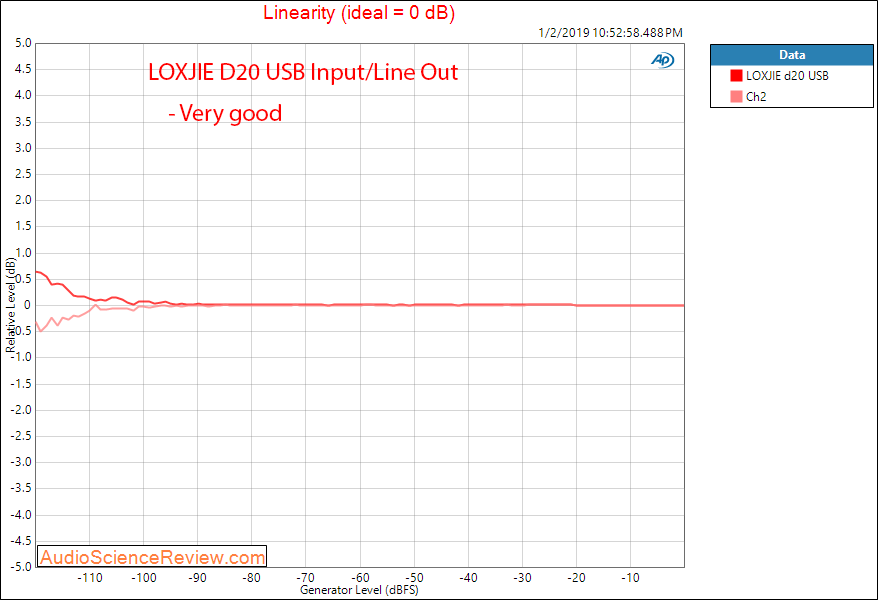 Ideal output would have nothing between the 32 tones. Instead we have all of those spikes filling the valleys.

Moving on to headphone section, we get this for power versus noise and distortion at 300 ohm: 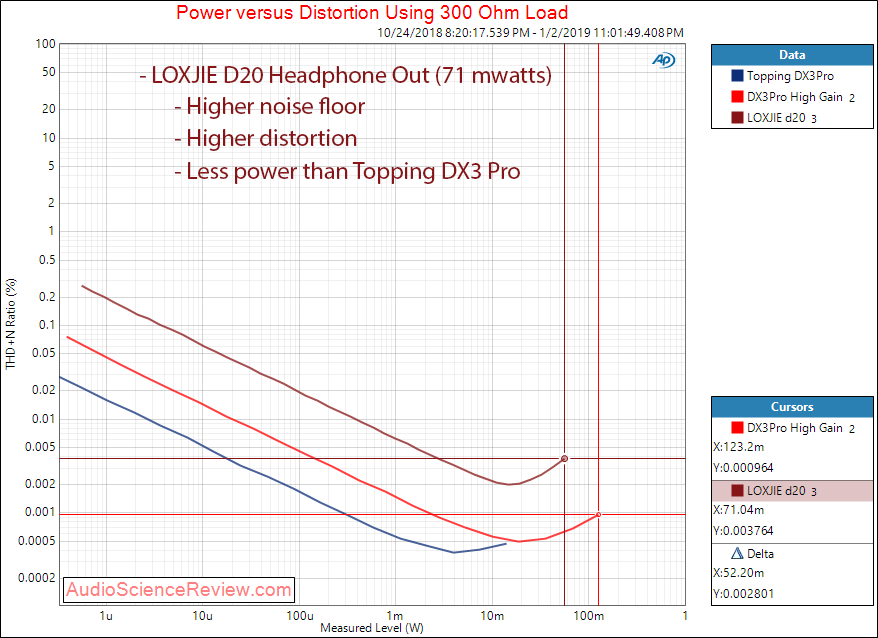 We see elevated noise and distortion together with less power as compared to its nearest competitor, the Topping DX3 Pro. 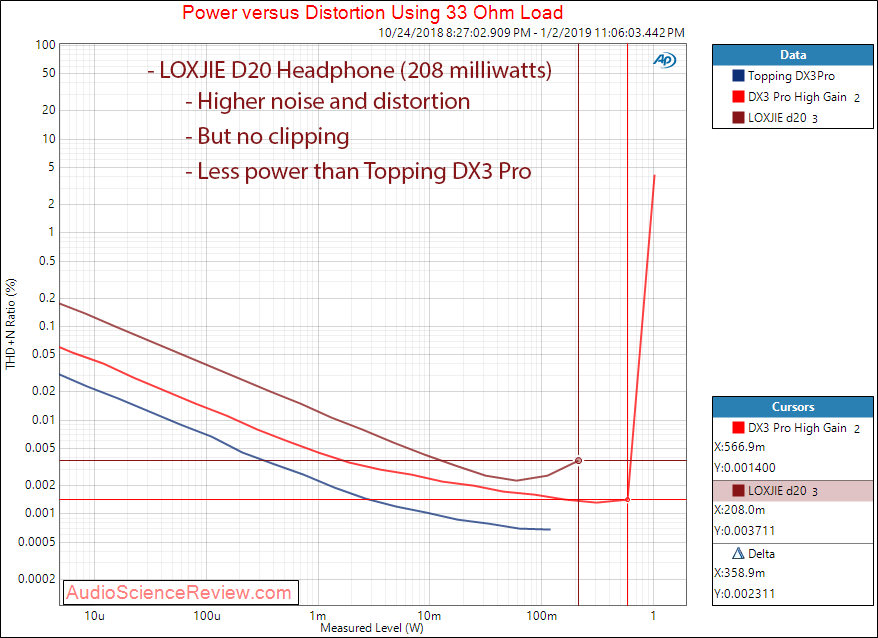 "Good news" is that there is no clipping so you can turn it up to max with similar fidelity.

Channel balance is perfect as it is controlling the level using the DAC/digital means: 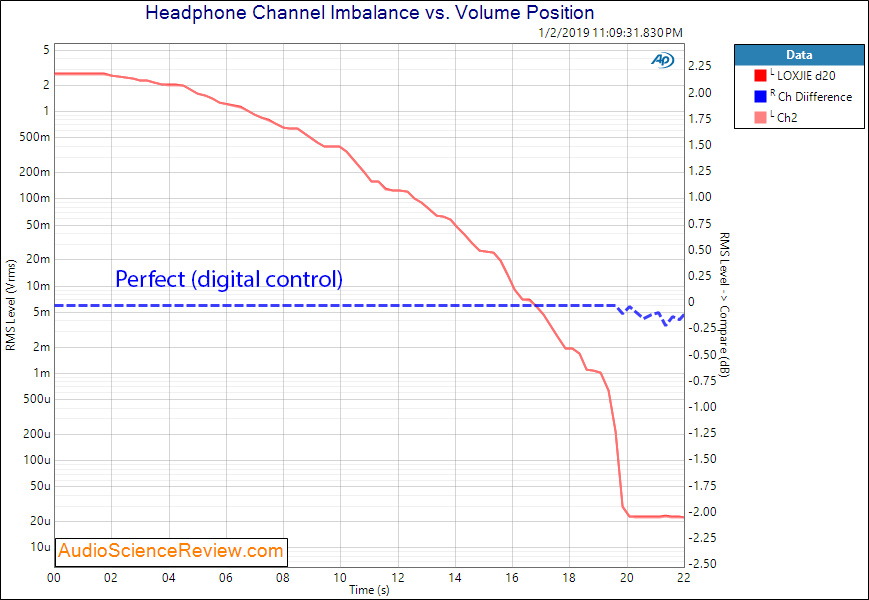 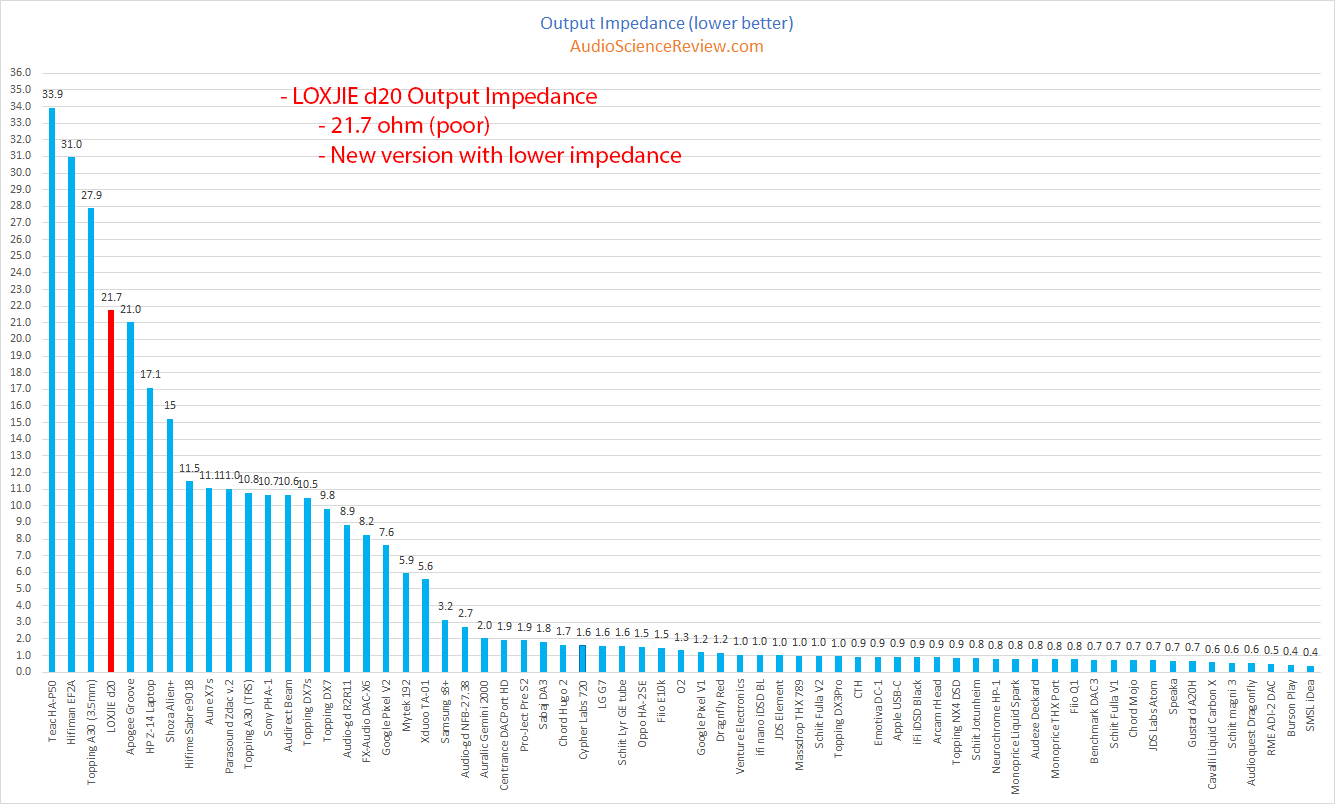 At nearly 22 ohm, that is way up there and will impact the frequency response of most headphones.

One of the owners of the unit sent me private message saying LOXJIE has modified the output stage of d20 and it no longer has high output impedance. Until I test it, I have no way of confirming that.

Given the disappointing objective performance, I did not perform any listening tests.

Conclusions
LOXJIE sets out to create a cheerful, differentiated audio products with vibrant colors. Alas, attention needed to be paid to what is inside first. There, performance is very disappointing indicating serious design errors that are degrading performance by 20+ dB. Reading the specs and the brochure for the product implies a very high fidelity design but there is no trace of it here. As such, I cannot recommend the LOXJIE d20.

For slightly less money you can get the superb Topping DX3 Pro which not only has excellent objective performance -- with a lower end DAC chip no less -- but also includes Bluetooth and a huge LED display.

It has been a while since I had some nice caviar with eggs and toast. Please consider donating some money so that I can get a can using:
Patreon: https://www.patreon.com/audiosciencereview), or
upgrading your membership here though Paypal (https://audiosciencereview.com/foru...eview-and-measurements.2164/page-3#post-59054).
Amir
Founder, Audio Science Review
Founder, Madrona Digital
Contributing Editor, Widescreen Review Magazine
Click for My Technical Background
Master List of Audio Reviews

Aww that's too bad. Really low noise floor but pretty high harmonics in signal. Could have been great.

Hum... Another product with the only argument to use the AK4497... Or any bad integrated flagship chip, for that matters...

I was obsessed for such a long time about the chip only... ASR opened my eyes, somehow!
Anti-BS Crusader
OP

WOW! What a disappointment. I wonder if all of their products are on the same level of performance. I sent my P20 back a month ago, but I am still wondering how the device would measure.
OP

I have the P20 which I bought myself and will measure it at some point.
Amir
Founder, Audio Science Review
Founder, Madrona Digital
Contributing Editor, Widescreen Review Magazine
Click for My Technical Background
Master List of Audio Reviews
H

Shame, I like the look of it, it's a nice change in styling! The lcd is laughably small though. The volume knob looks cheap as well, hopefully it's better in person. Appropriate Pink Panther as well
R

Amir doing product beta testing yet again... Let me guess "this unit is faulty".
Send them a testing bill.

It is going to be morning very soon in Shenzhen, very easy to imagine the number of jaws that will drop after reading this review.
You save our reputation with our wifes @amirm - one cannot bring home a device as much broken as this one, which is not going to be the last in the long queue to the bone yard, unfortunately. 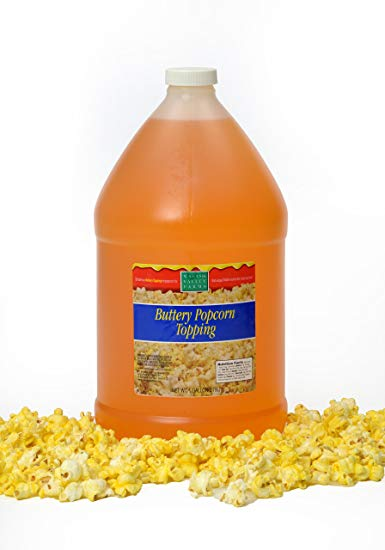 2019 New Chinese Audio Product of the Year: Power Bottoming B50 with EXTRA BASS 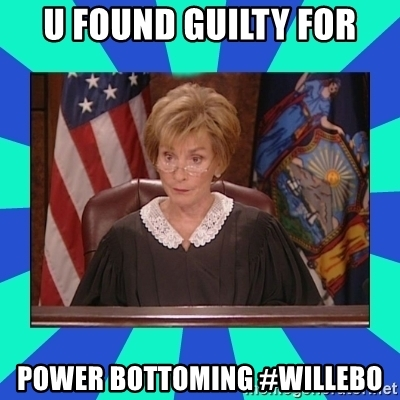 2019 New Chinese Audio Product of the Year: Power Bottoming B50 with EXTRA BASS
Click to expand...
Sounds like a cheap receiver with saturated input stage.
W

That screen looks a lot like my Sabaj D4. I've been curious to send that over to Amir, but I know Reference-Audio-Analyzer has analyzed it at the very least and the measurements looked fine? I think?

There's always been something sound-wise that doesn't seem as clean as, say, the SDAC, despite using the same chip. However, subjective impressions aren't worth much, of course.

bravomail said:
Lox Jie translates to Russian as "audio fool". Telling? .
Click to expand...
And as "merde" in French and as "schiit" in Californian-Valencian's slang ...