This is a review and detailed measurements of the KORG NuTube based, NuTekt HA-KIT headphone amplifier. It is on kind loan from our friends at Gig Harbor Audio. It comes in kit form and retails for USD $249.

If you are not familiar with "NuTube" is miniaturized triode vacuum tube. Here is the marketing statements from the company: 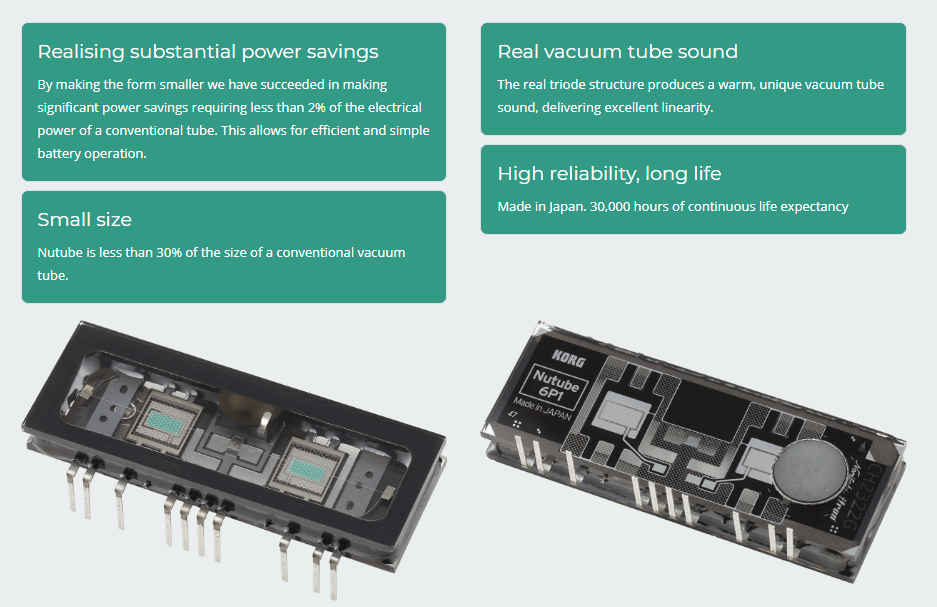 The KIT comes in awfully cute configuration of the "CMOY" headphone amps: 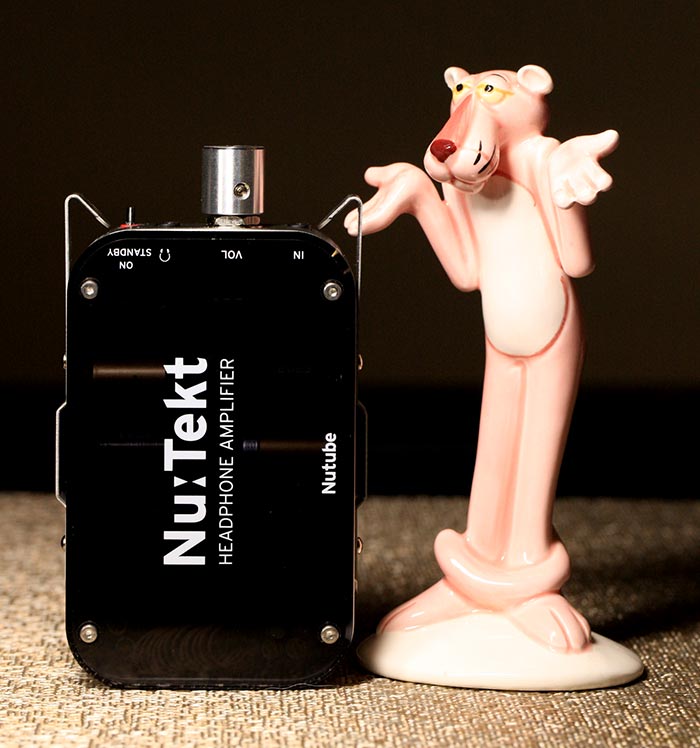 When powered up, you see two pretty blue lights when the tubes light up: 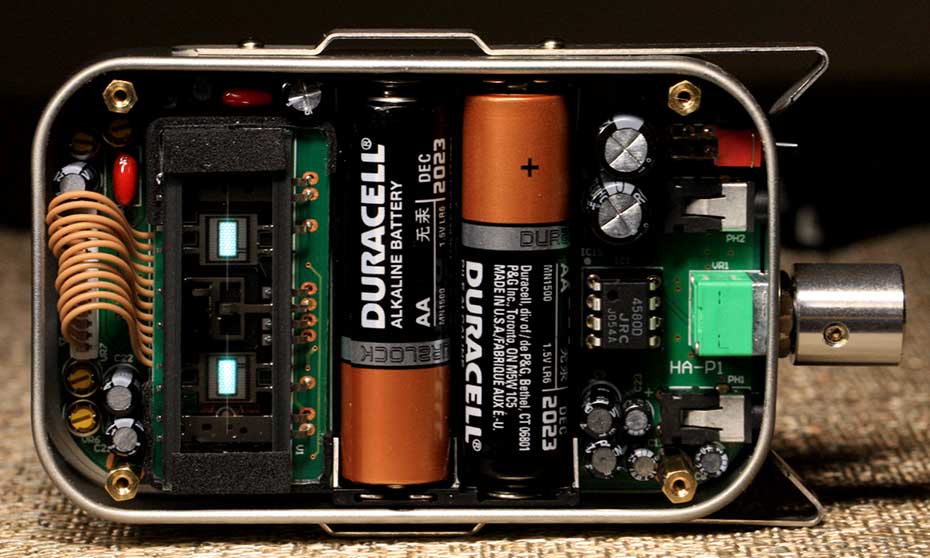 As you see, it runs on just two AA batteries which is stated to last 9 hours. Don't try this with your normal tube amplifier!

The tubes can be microphonic (generate electrical output based on vibrations) so they are mounted on rubber foam of some sort. Banging on the modul with my finger created a high pitched "biiiiing" but took fair bit of effort to get it to do that. So in normal use it should be fine even if you are walking with it and such.

Out of the box the two channels had different levels, total amplification was negative at 80% (i.e. it was more of an attenuator) and distortion was through the roof at some 2.5 to 4%. There are four potentiometers on the left that adjust levels and bias of the tubes. Using my audio precision analyzer, I matched the levels, increased amplification to 1.4X or so, and reduced distortion substantially as you see in the measurements below. KORG states that the user adjust these by ears. Good luck with that.

Let's get into the measurements and see how she does.

Measurements
As noted, I optimized the performance prior to measuring the unit. Here is our dashboard data: 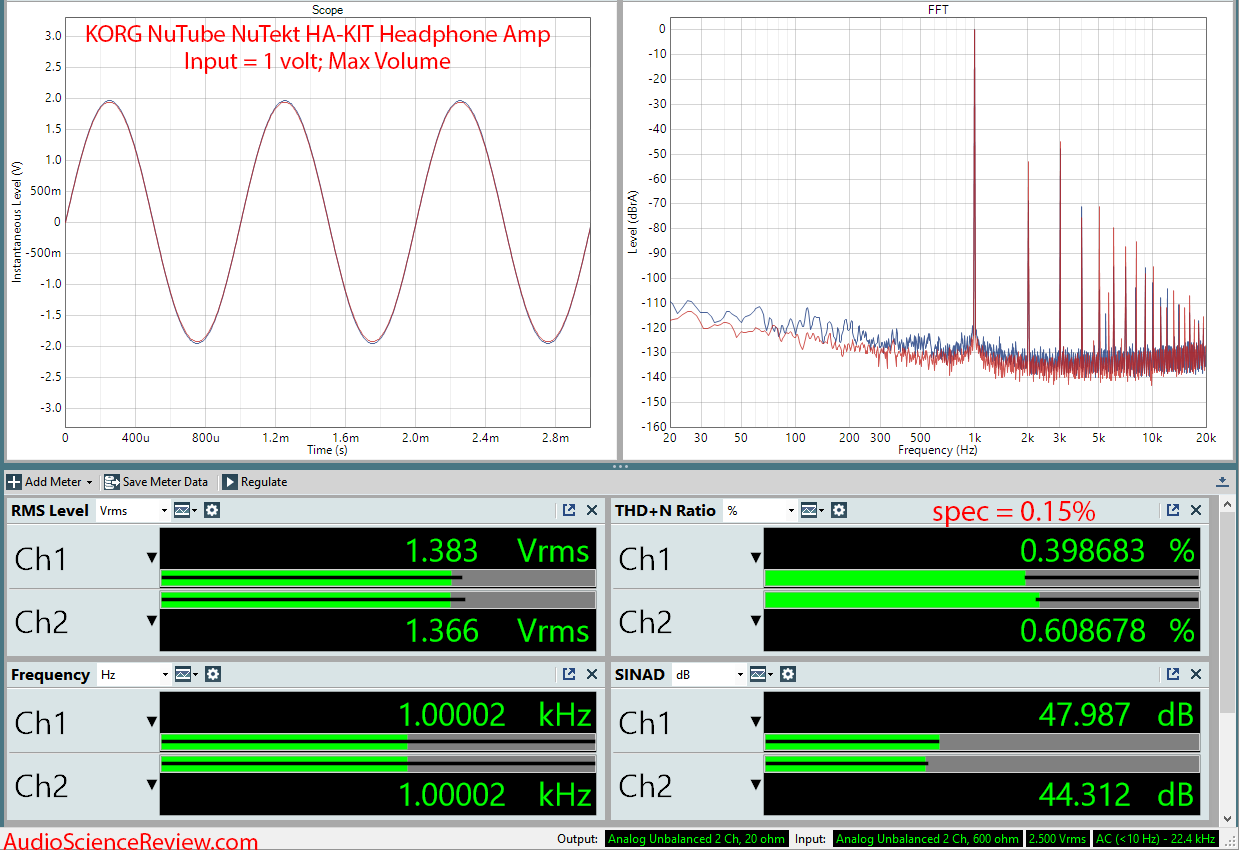 As we see with an input of 1 volt, we only get 1.38 volts output. That's hardly any amplification. I tested the batteries and while not new, they were outputting 2.9 volts or so. There are no specifications for power, gain or anything so hard to say if this is a defect in assembly or the unit is supposed to only output so little power/voltage.

We have massive amount of distortion here, dominated by the third harmonic. There is a one-line spec saying distortion should be 0.15% but I am getting 0.4% in one channel and 0.6% in the other.

Fortunately the unit is quiet when as indicated by its signal to noise ratio: 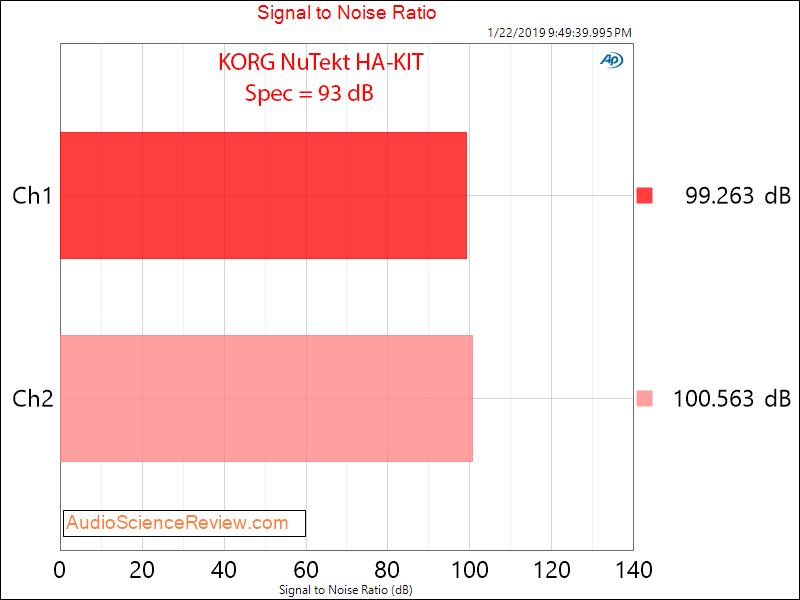 It actually exceeds the spec of 93 dB so that indicates the assembly should be OK.

There is very audible and significant turn on pop. I measured it to quantify it (will run the same test in the future): 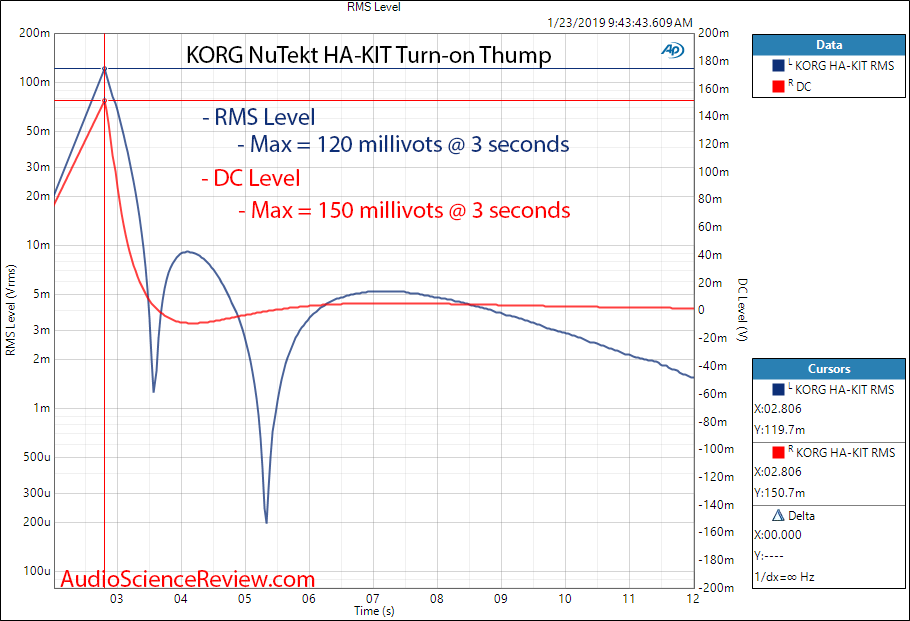 As we see there is good bit of DC component to that to the tune of 0.15 volts. Definitely keep the headphones off your ear when turning on the unit.

Likewise there is noise when powering off: 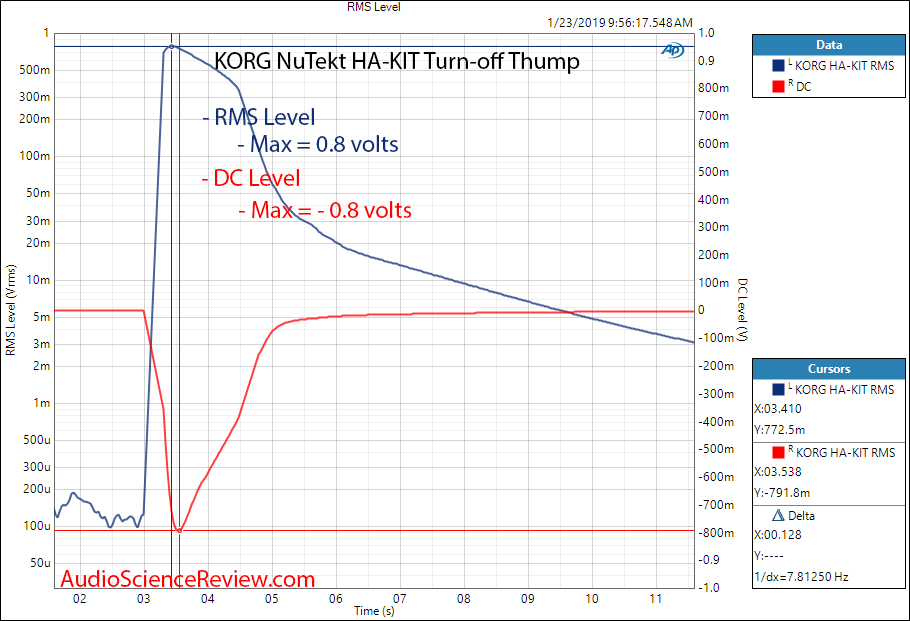 These are with 300 ohm load by the way so there is fair amount of energy there.

Frequency response is very flat so anything you hear differently will be the result of distortion: 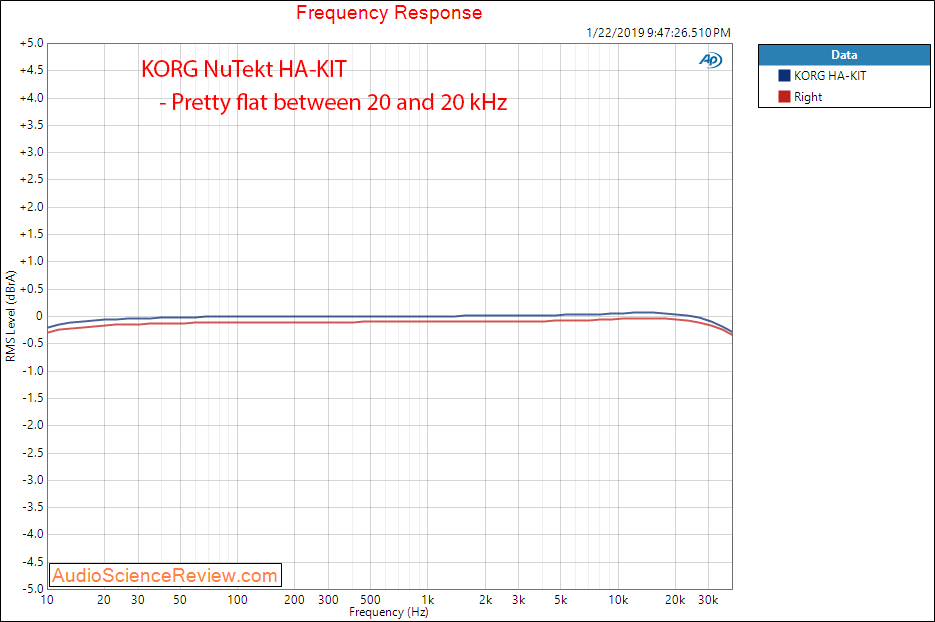 You need to be sitting down before you look at intermodulation distortion versus measured level: 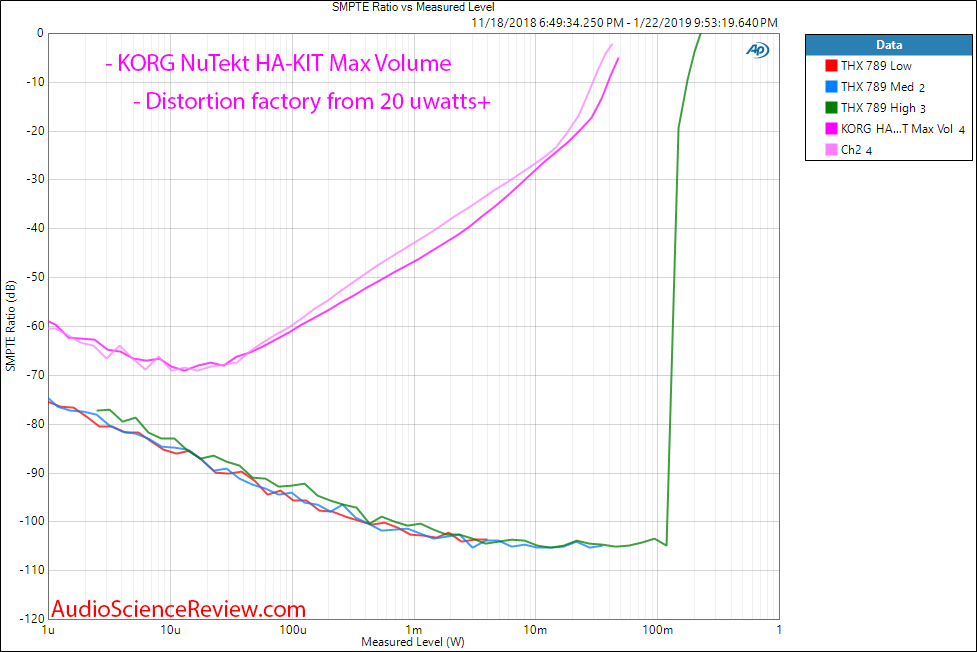 You don't have clean power after just 20 uwatts or so. That is microwatts, not milliwatts. Given the anemic output, you will be operating the HA-KIT near the top of its range and as such, very high distortion levels.

Power versus distortion at 300 ohm states the same thing: 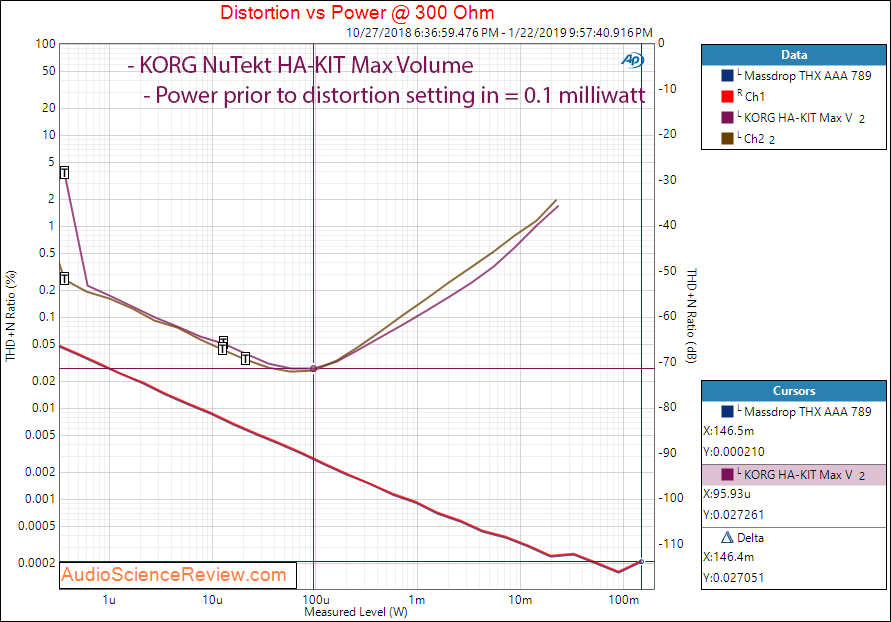 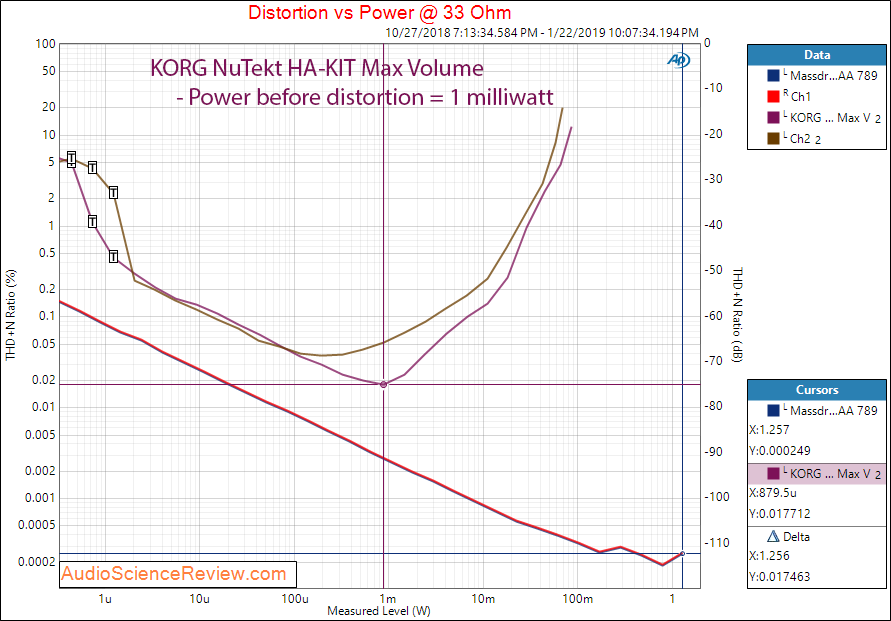 At least we have decent amount of power, albeit at very elevated levels of distortion.

THD+Noise versus frequency shows same serious levels of distortion at all frequencies: 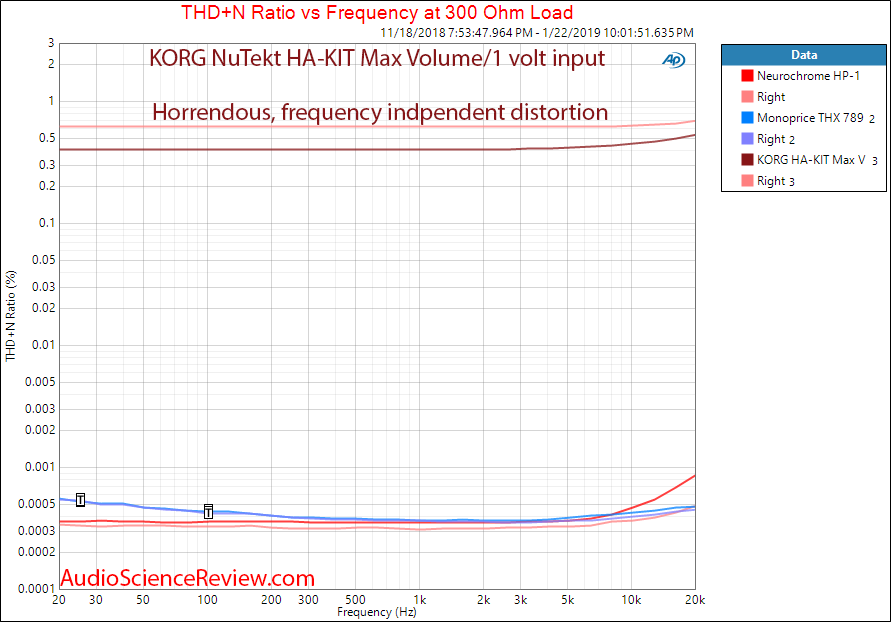 Output impedance is 10 ohms so expect some frequency response variations with lower impedance headphones which have varying impedance curves: 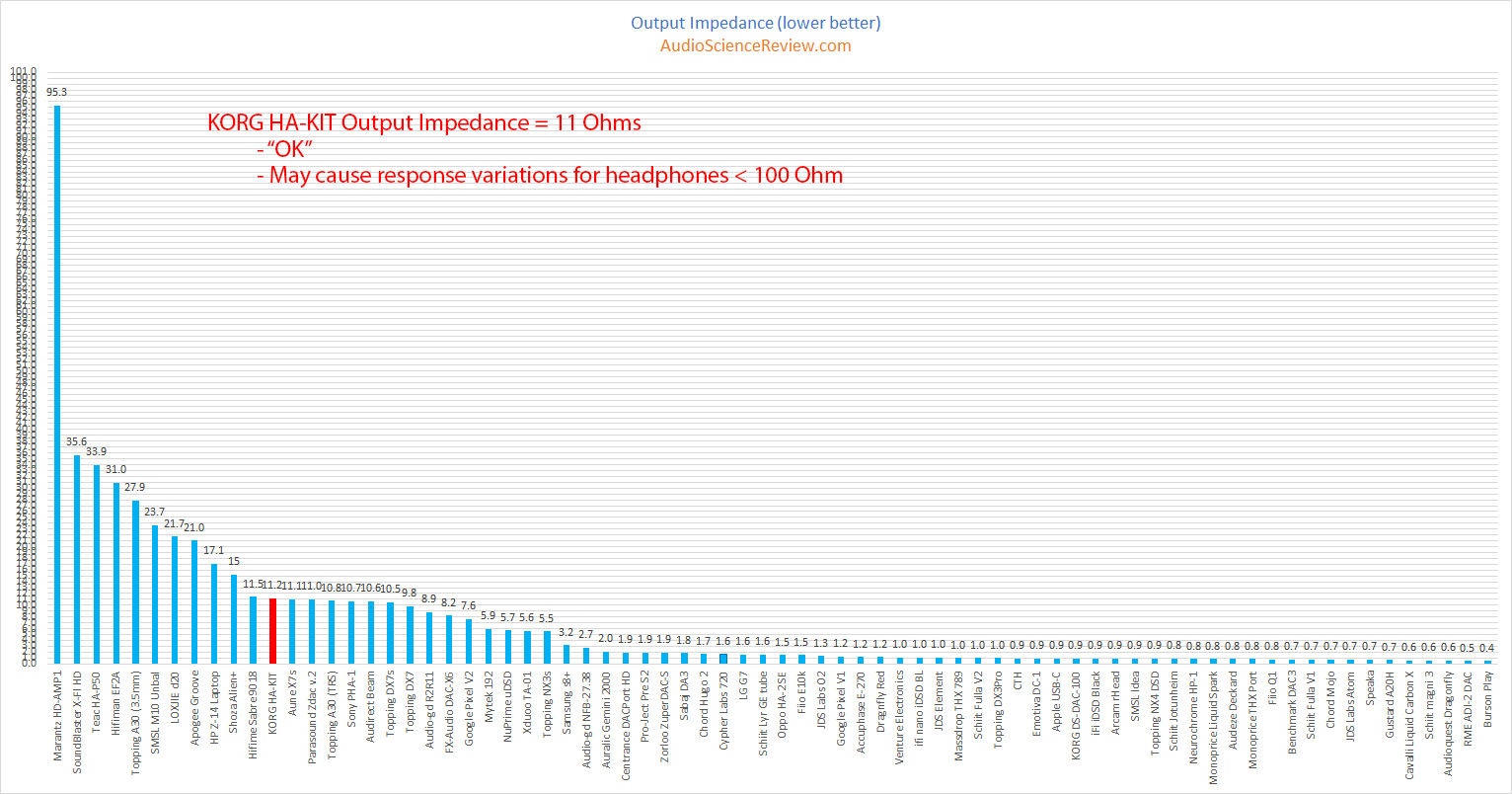 I think we know what is going on, yes? Yes!

Listening Tests
I thought this step in the review would be a walk in the park but was not the case. With my two reference headphones, the Sennheiser HD-650 and HifiMan HE-400i, there simply was not enough volume there. The sound was weak and I actually had to tell my wife to turn down the TV to hear it. So put aside your high impedance or power hungry low impedance headphones. FYI the testing was done against the JDS Labs battery operated O2 with levels matched through a selector box.

I got decent volume with AKG K90, Grado SR60 and Sony MDRV6 but let's wait on those. I tried to test with my Etymotic ER4XR but the sound was anemic so gave up on that. What proved to be usable was the KZ-ATE IEMs. Even there, I had to wear my AKG K9 over them to block enough noise to hear the details in music!

WIth the KZ-ATE I was able to hear the same characteristic I hear in other higher power desktop tube amps. High frequency detail if isolated become more shrill and hissy. This is especially so if there is accompanying bass which pushes the amplifier more into distortion range. Bass frequency "detail" would also get lost if it existed (e.g. in regular rhythms). There was also a sense of detail that was lost at times.

Note that the exaggerated highs can make you think there is more space there so keep listening and focus on clarity of high frequencies.

Once there, I was able to hear the same issues with Sony MDR-V6 headphones. And to some extent with the Grados.

Surprisingly on a lot of content it was hard to hear much of any difference. What was front and center of course was the lack of power. The volume was just a step above what I call background music listening. If the music content is not maxed out to 0 dBFS, then you are just not going to enjoy this device even with sensitive and noise blocking headphones/IEMs.

Conclusions
Korg/NuTube have succeeded in created a miniaturized tube. The sound or better said, the audible artifacts are the same as classic tube products. In this portable configuration though, gain and available power is highly limited so in my book the package is a failure. Yes, you get some of that tube characteristic. But that is a detriment in my book, not an advantage. Best way to learn this is to perform an AB test like I did. Do NOT just opower this thing, be impressed by its looks and lights and think you are hearing this and that. Perform a controlled, level matched test (doesn't even need to be blind), and then evaluate. I am sure you will hear all the drawbacks and no benefits.

In summary, the KORG/NuTekt HA-KIT is a cute desk decoration and great conversation piece. As a headphone amplifier for listening to music, it is not something I can remotely recommend.

They say you should save money for a rainy day. It rains for about 6 months here so I need plenty of money!!! Please consider donating funds using:
Patreon: https://www.patreon.com/audiosciencereview), or
upgrading your membership here though Paypal (https://audiosciencereview.com/foru...eview-and-measurements.2164/page-3#post-59054).
Amir
Founder, Audio Science Review
Founder, Madrona Digital
Contributing Editor, Widescreen Review Magazine
Click for My Technical Background
Master List of Audio Reviews

Nothing else is in the queue at the moment.
Amir
Founder, Audio Science Review
Founder, Madrona Digital
Contributing Editor, Widescreen Review Magazine
Click for My Technical Background
Master List of Audio Reviews

Years ago there was a small tube called the Nuvistor. Looks like these guys were trying to reinvent the wheel.

We got a new benchmark! Other side of the spectrum.

but harder to find those for portable devices, sorry!
!t's Got to Be Purrfic!

confucius_zero said:
so many bad korg products reviewed... any reviewed gems upcoming soon?
Click to expand...
I have been able to sell my Korg DS-DAC-100 the other day ... I would have never do that without @amirm recent review of it ...
Now, this Korg brand is coming back here ... Who, within this reputable manufacturer organization, has taken the decision to give the green light to the budget associated to the development / launching of this joke here just reviewed ?
Whoever you are, pls. come out to explain what the reasons for which you did that are ...

Here you have the full catalog available : https://www.ebay.fr/str/nutubeusstore
And some nice PCB' shots here : http://www.nutube.us
H

This reminded me of the Littlebear portable tube amp Zeos has reviewed and liked. Wonder if anyone would send one those in to be reviewed?

I'm not entirely sure why portable tube amps exist to be honest... for me part of the fun of tube amps is the looks and trying different tubes, these portable ones don't really provide satisfaction in that regard. I guess if it can provide a tube sound then I get it but this one sounds like it's broken if it can actually power your headphones properly.

I've heard of this being used in guitar pedals and that seems like a better use of its tube-like characteristics. 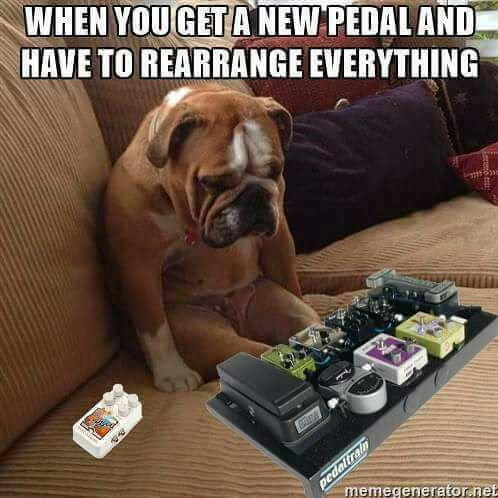 @amirm I believe there is a typo in your thd+n vs frequency graph. You list the monoprice thx 789, I think you mean massdrop.

Wow this just looks wonderful! I better pick one up immediately /s

I have a different nutube headphone amp and if I so much as brush against the headphone cord I get a ringing sound from it. I guess I got an extra microphonic nutube.

I don't have any power hungry headphones so I don't really need an amp, I just like building things but I quit using it because of the ringing.