This is a review and detailed measurements of KORG MR-2000S ADC and comparison to the ADC portion of RME ADI-2 ADC. I have previously measured the DAC portion of KORG MR-2000S and RME ADI-2 DAC.
The KORG has been on loan to me from a kind owner. It will be shipped back tomorrow so I won't be testing anything on it after the review. I own the RME ADI-2 Pro and will do more testing on it in the future. 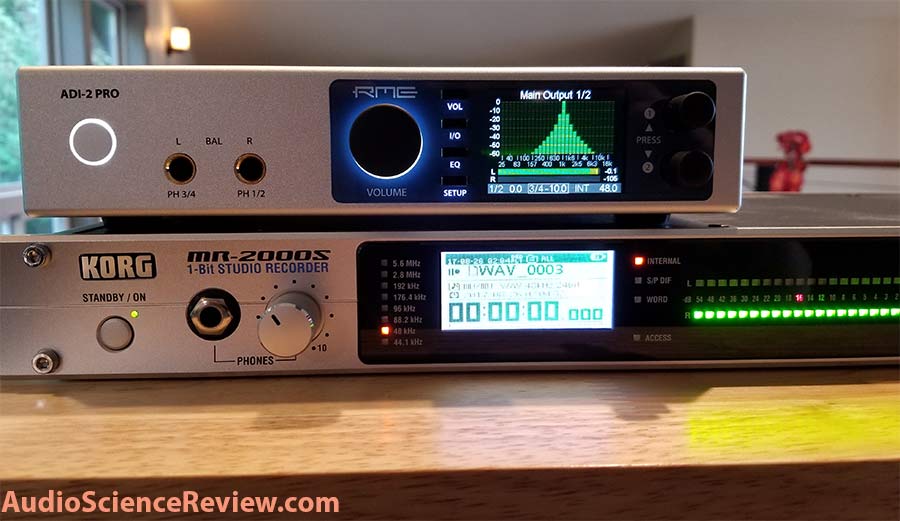 The KORG MR-2000S is a stand-alone (and connected) professional audio recorder whereas the RME ADI-2 Pro is just ADC/DAC. So not in the same class of operation but still, I am sure many are looking for a reference so I picked the ADI-2.

Operationally both devices are a nightmare. We are talking small screen user interfaces with a design that only the original firmware developer loves. We are talking nearly half hour spent on both just to get the bloody devices to input audio over XLR and output over SPDIF at the same sensitivity and sample rate/bit depth. Honestly, why don't these companies do some usability testing of these features?

I have already complained about the ultra-cheap and chintzy dongle on the ADI-2 Pro which I had to use for S/PDIF. But I thought I do it again in the hopes that RME improves the quality here.

The KORG is a rack mount device with all the connectors in the back. The lousy part of it is a monochrome display that has low contrast. The display on the RME ADI-2 Pro runs circles around it.

Anyway, I am sure most of you want to see the measurements so let's get into them. These being the very first ADCs I am testing, I don't have a tutorial to send you to. So I will describe them as we go although they are similar in nature in some cases to DAC tests.

Measurements
For all of these tests, the only input used was the balanced XLR. In almost all cases, the drive level was 19 dBu. The input sensitivity on RME ADI-2 was set to 19 dBu. On the KORG I set it to "16 dB" which matched the RME to 0.1 dB.

Let's start simple with frequency response. Here I set the analog output on my Audio Precision analyzer to 19 dBu for RME and 18 dBu for the KORG to offset them on the graph for better viewing: 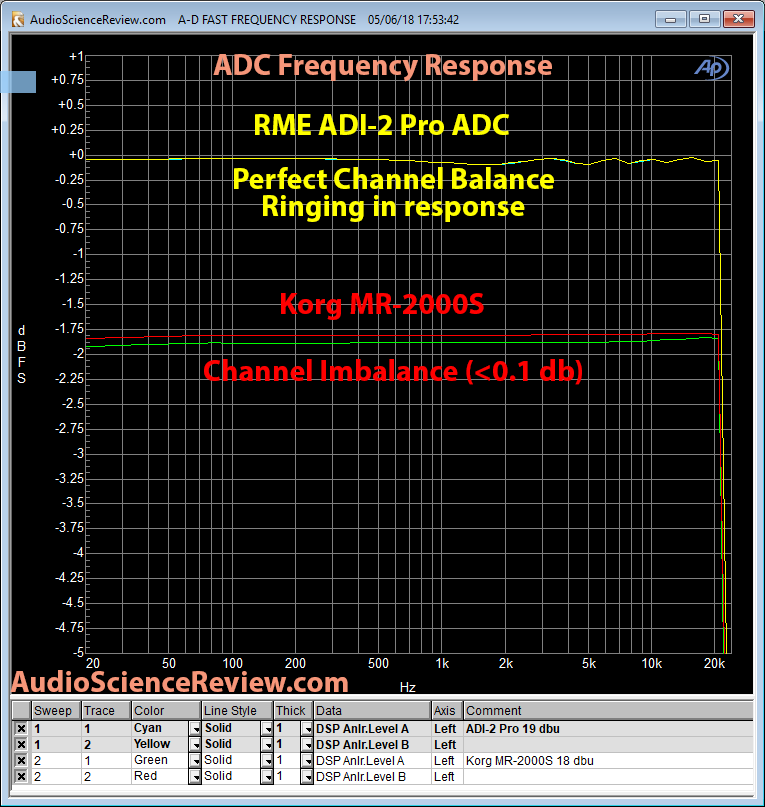 Starting with RME, I was a bit disappointed to see the ringing (up and down swings) which I assume it is due to the anti-aliasing filter. While the variations are small, it starts ringing at around 1 kHz! Will have to analyze this further in the future.

The Korg doesn't have ringing but the two channels are offset by about 0.09 dB. Not a lot but in a professional product, I expect better matching. 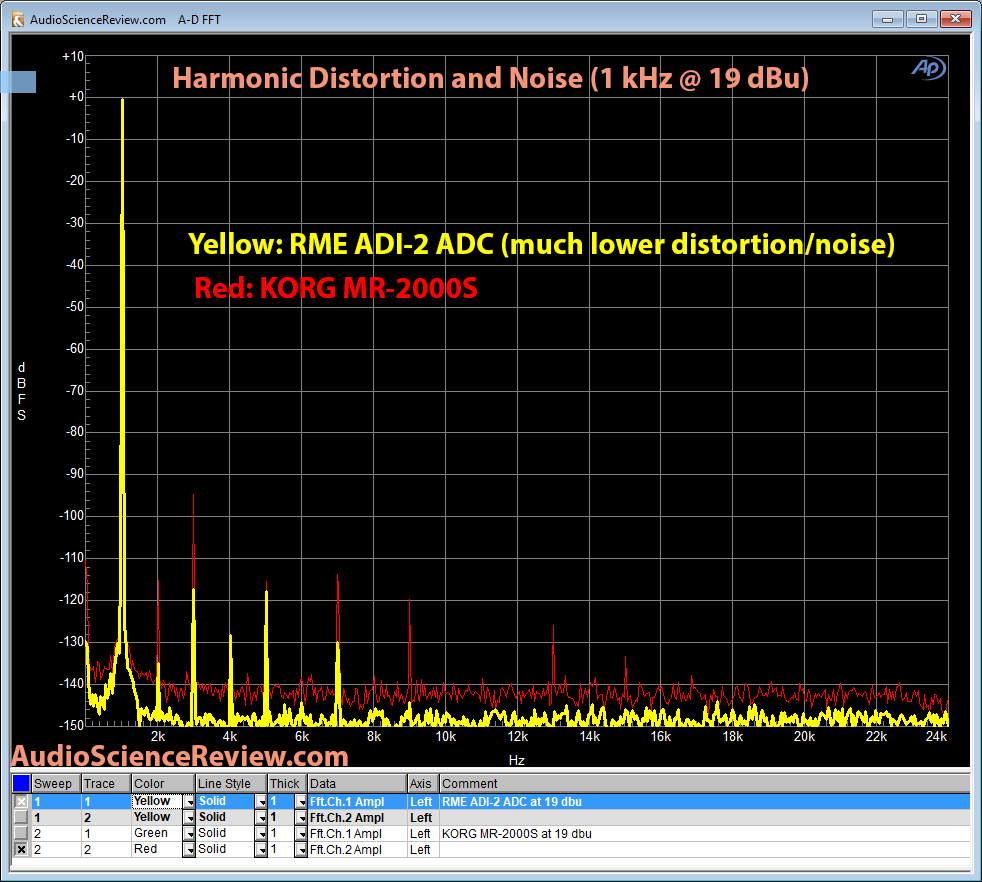 The RME shines really well here. It has a lower noise floor (by 8 to 10 dB) and much lower harmonic distortion components. We are talking 20 dB differential so not insignificant.

Looking at the noise floor with no signal we see:

We have 10 dB difference in favor of RME ADI-2 Pro as the previous measurement indicated. Converted to bits, the RME delivers 20 bits while the KORG trails it at 18 bits.

Next let's look at linearity. Here, an analog output is varied by my analyzer and resulting digital value compared to it. Any deviation is a product of error in my audio generator and ADC: 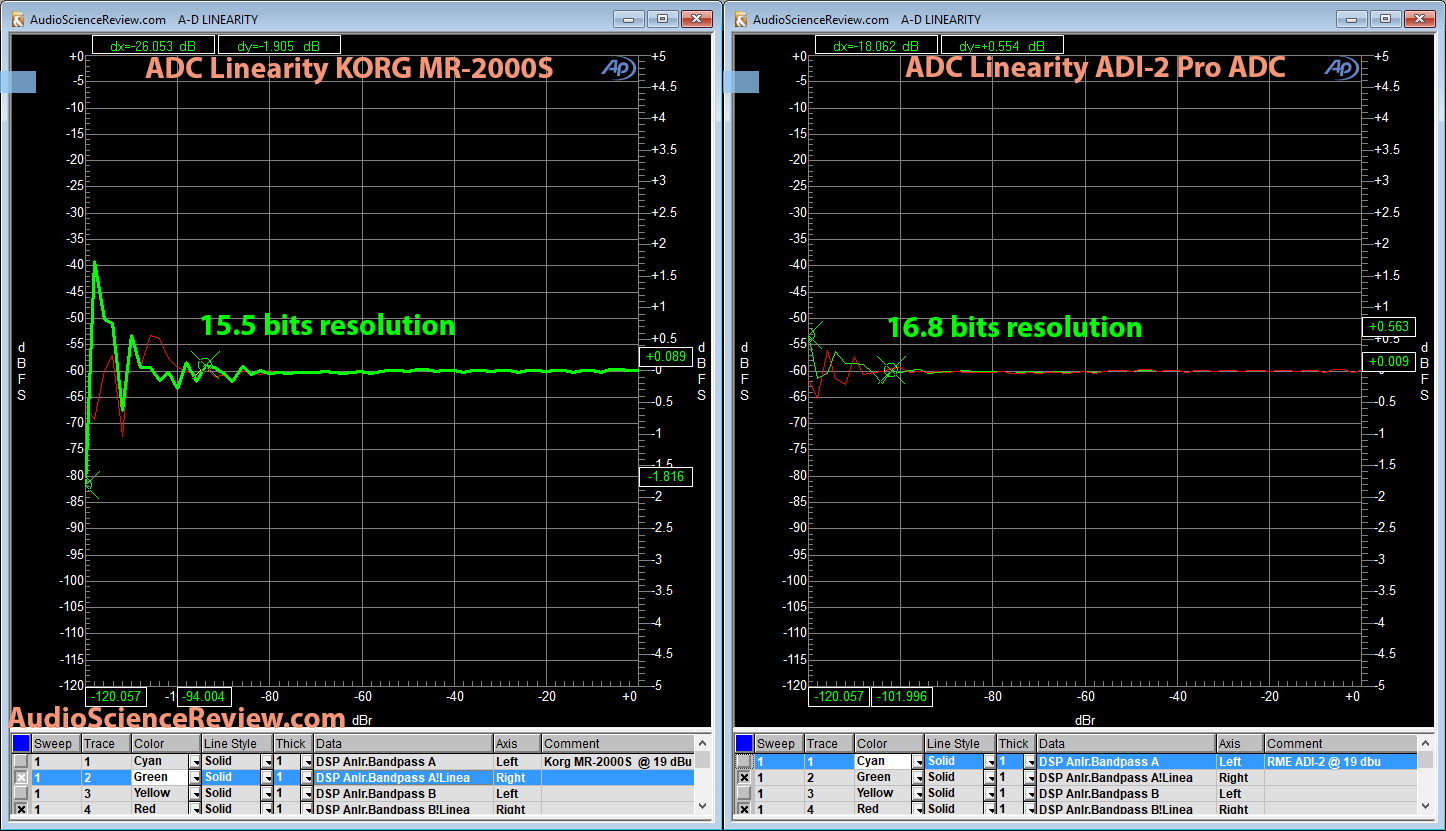 As we see, RME ADI-2 Pro delivers again. Using my self-imposed limit of 0.1 dB, the RME delivers equiv. of 16.8 bits here while the KORG stops at 15.5 bits. But the RME maintains its low error almost to the limit of -120 whereas the error on the KORG keeps getting larger and larger.

Let's look at THD+N versus level where my analyzer changes the analog output level and measures what comes back as far as distortion and noise: 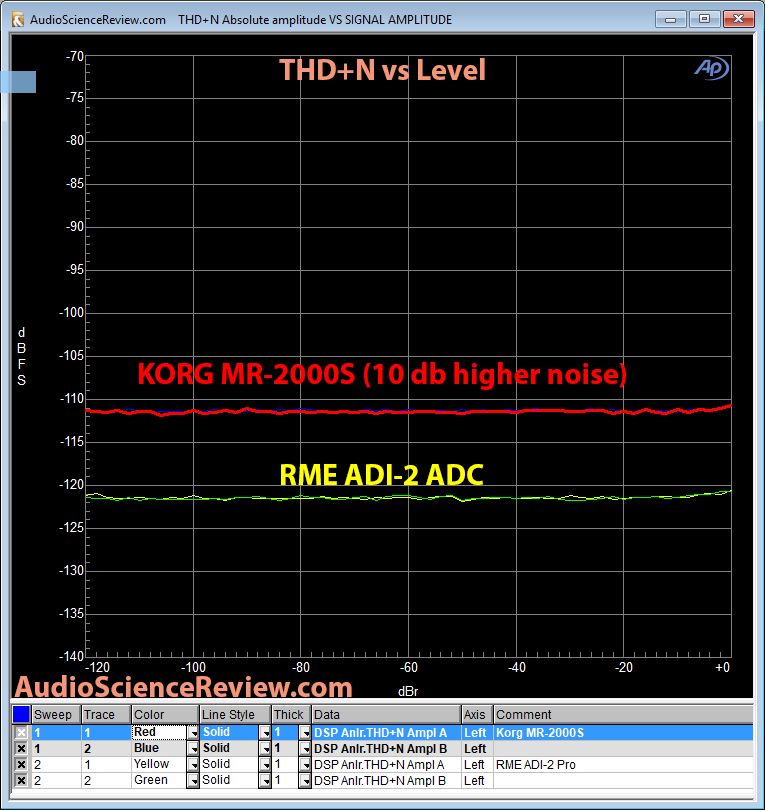 Pretty uniform differential in favor of RME ADI-2 ADC across all levels. Neither ADC clips the input either.

Now let's see how they do when we keep the level the same but change the frequency: 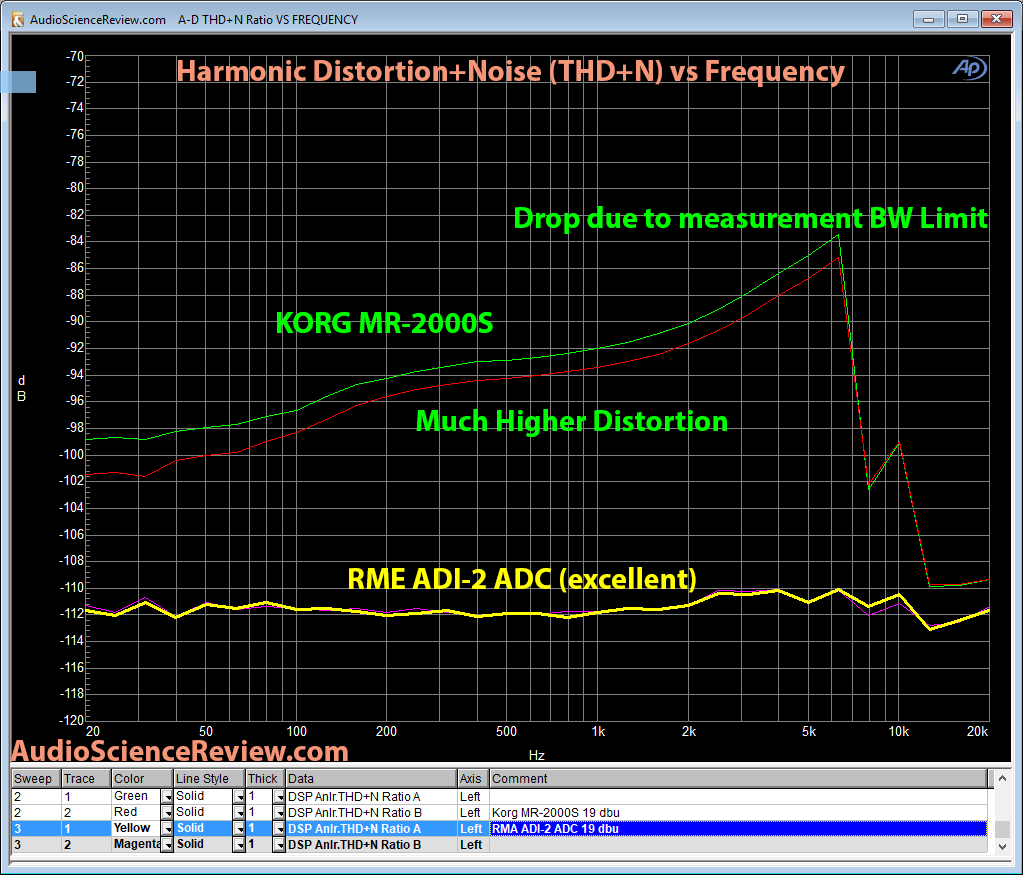 We see a rising distortion with frequency in KORG MR-2000S. The sudden drop at the end is actually a measurement error in that we have kept the bandwidth fixed so the harmonics are no longer measured after a point. So in reality, the RME ADI-2 Pro has a commanding lead at higher frequencies to the tune of 30 to 40 dB!!!

A side note: in all of these measurements we are at the mercy of how clean the output of my analyzer is as that is the minimum noise and distortion that can be seen even with an ideal ADC. Fortunately as we see in the measurements of RME ADI-2 ADC, the analyzer distortion seems excellently low as to allow easy differentiation of these DACs.

Conclusions
The RME ADI-2 Pro runs circles around the KORG MR-2000S' performance. It does this in every measurement and consistently so. Until I measure more ADCs, I can't say how "bad" the KORG is. But I can say that the RME ADI-2 ADC like its DAC is producing superb measured performance.

Thanks for measuring/evaluating the AD converter of the Korg MR-2000S.
It appears Korg's DA conversion is superior to its AD conversion.

I hope you can perform additional ADC tests on other units in the future!
Vbr,
Sam

I've been considering how to do ADC measures and reviews of the devices I have on hand the past week. Other matters have kept me from posting them. I'll do so in time. Not having an AP unit complicates matters, but multiple comparison of 3 DACs over a trio of ADC's makes some useful comparisons possible, but not as straightforward as DAC testing. It would appear all of my ADCs are better than the Korg. So it actually doesn't look competitive against more recent gear. Again in time I'll back up that opinion with test data.

I agree with you about the user interfaces. I'll say the Forte and the Zen Tour are both reasonably well thought out in this area. Software interfacing is more detailed and better, but both of those devices can be used quite straightforwardly for your basic purposes using the touchscreens they have. The software of the Focusrite 18i20 leaves something to be desired even though its hardware interfacing is old school and simple. The Zen Tour does the best job of having a very usable and useful touchscreen interface which is highly functional without a computer connected combined with a useful, easy to understand and surprisingly adaptive and powerful software interface. That is before I get to Android phone apps for the Zen Tour which can be nice as well. So some companies are making progress in this area. I think this is currently an area of rapid improvement in prosumer recording interfaces. Antelope audio has supplied regular significant software updates to these capabilities so improvements have occurred after the hardware was released.
OP

c1ferrari said:
I hope you can perform additional ADC tests on other units in the future!
Click to expand...

I need more kind donors like you . But yes, over time I hope to have a whole chapter dedicated to professional products.
Amir
Founder, Audio Science Review
Founder, Madrona Digital
Contributing Editor, Widescreen Review Magazine
Click for My Technical Background
My YouTube Channel

I'll be sending you a Tascam DA-3000 in due course. It will be interesting to compare the Korg MR-2000S versus the Tascam DA-3000.
I'm hoping others from various forums find you efforts to be of benefit and/or offer constructive observations relevant to evaluation protocol/methodology.
Vbr,
Sam

Very cool to see ADC measurements! I feel like less people are commenting since these are 1. way out of budget, and 2. DACs are more what people/consumers look for, to reproduce music rather than to capture it
OP

The market for analog to digital converter of course is very different than DACs. And audience much smaller. Still, as long as people offer them to me, I will measure them.
Amir
Founder, Audio Science Review
Founder, Madrona Digital
Contributing Editor, Widescreen Review Magazine
Click for My Technical Background
My YouTube Channel
N

It is not a high priority for me right now. Probably in fall/winter when I have more time I will make one.
Amir
Founder, Audio Science Review
Founder, Madrona Digital
Contributing Editor, Widescreen Review Magazine
Click for My Technical Background
My YouTube Channel
N

amirm said:
It is not a high priority for me right now. Probably in fall/winter when I have more time I will make one.
Click to expand...

Wow the performance of the RME ADI 2 pro is great again!
It seems they really made a great box, it costs $1000 right? Or is this the more expensive edition?

Jimster480 said:
Wow the performance of the RME ADI 2 pro is great again!
It seems they really made a great box, it costs $1000 right? Or is this the more expensive edition?
Click to expand...

I agree either way however. They really make a great box at RME.

I agree either way however. They really make a great box at RME.
Click to expand...

2k is still getting up there!
I would like to see a comparison of this vs the Benchmark setup. Even though Benchmark is around 2x the price?
OP

One of our members is due to visit me in June and is supposed to bring his Benchmark DAC V3 here. If so, look for that comparison then.
Amir
Founder, Audio Science Review
Founder, Madrona Digital
Contributing Editor, Widescreen Review Magazine
Click for My Technical Background
My YouTube Channel

Thanks for the review.

By the way, the RME ADI-2 Pro can be had for around $1500 from Thomann, that's where I bought mine I use it mostly for the 5-band parametric EQ to compensate for the bass in my 4-way open baffle speakers. Works great, no complaints apart from getting lost in the menus sometimes...
You must log in or register to reply here.

Do I need an audio interface or a headphone amplifier?