This is a review and detailed measurements of Hifime UDA38Pro DAC which is built on the flagship ESS DAC chip, the ES9038Pro. I purchased this a few weeks ago based on suggestions from members that this is by far the cheapest implementation of ES9038Pro. I paid USD $260 including shipping from Hong Kong. I was told in the confirmation that I would get a tracking number but none came. I complained to Hifime and they never responded but the unit arrived the next day so I did not chase them anymore.

I must say, it is rare that I am so disappointed from the look of a unit as when I received the UDA38Pro. It is a cheesy, China-special box that should be retailing for $20 instead of over $200: 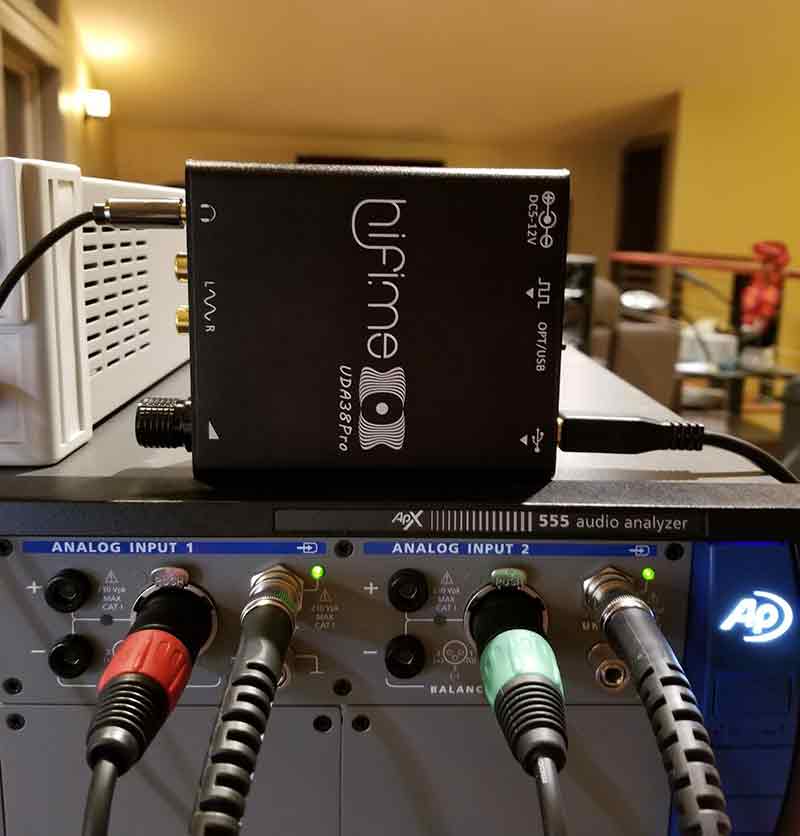 As you can see, it is a tiny little box. It can be powered from USB or external adapter which was not supplied. A tiny toggle switch selects between USB and Toslink inputs.

Output is provided in both RCA jacks and 3.5 mm headphone jack. The level in both is adjusted using that volume control. In my sample, the shaft is crooked or the knob is pushed in too far as it would rub against the case with the most unsatisfying feel. I pulled it out a bit and it rotates a bit easier.

The volume control has limits but apparently controls the levels digitally. As such, it jumps in large steps, making level setting a bit difficult.

The unit is USB UAC-2 compliant so I did not have to install any drivers to use it on Windows 10 Creators edition.

Let's get into the measurements and see how she did.

Measurements
As usual, I started with the dashboard view of the device. I must say, I was not prepared for what I saw at max volume out of the RCA jacks. The output was severely distorted. I was seeing 2.5 volt output so I thought I should set it to 2 volt which is the nominal output of RCA jacks for consumer products, hoping that gets rid of the massive amount of distortion. Well, it was not meant to be: 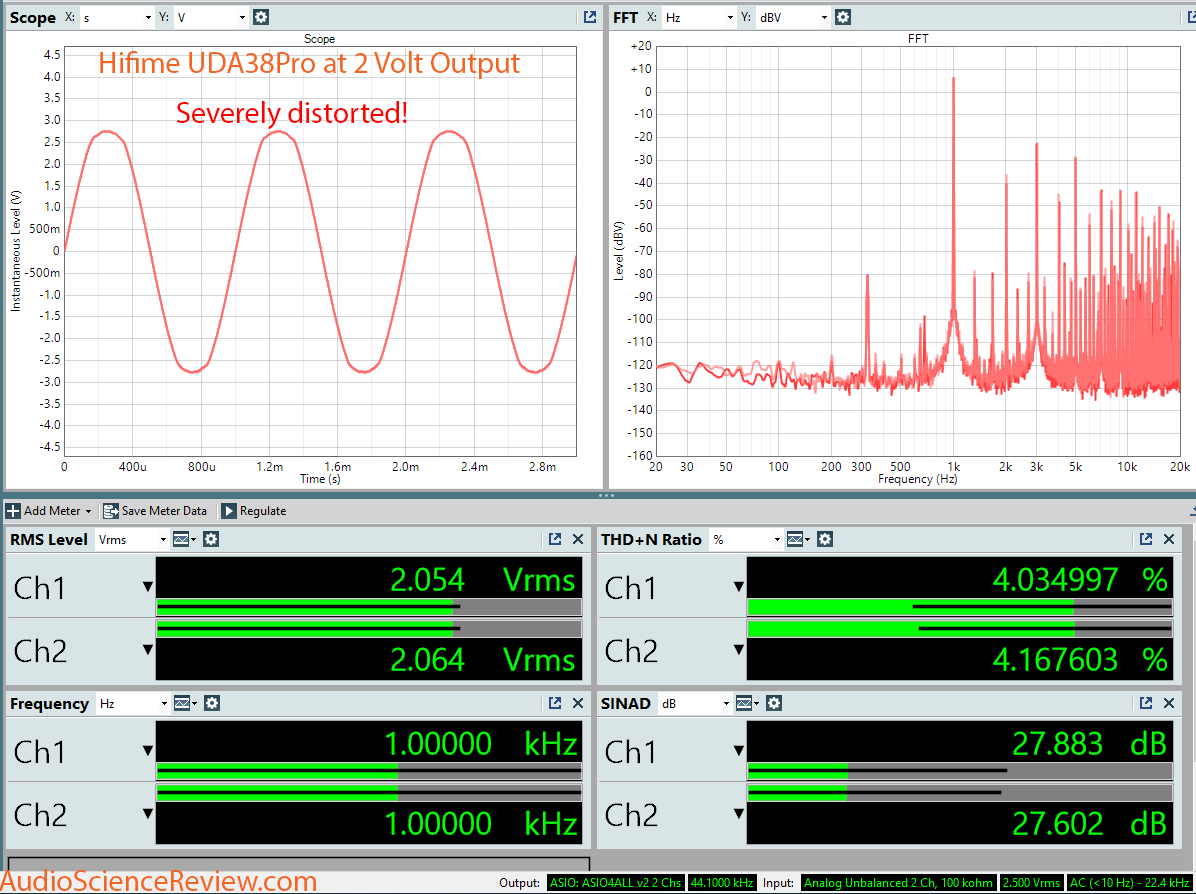 We usually resort to FFT spectrum to find distortion as seeing it in the scope display on top level usually is very hard. Not here. The waveform externes are clearly rounded which indicates massive amount of distortion. That is reflected in whopping 4% THD+N and SINAD of just 27 dB!!!

This was with USB. I thought maybe an external power supply helps it. So I hooked up my lab supply at 12 volts and it made almost no difference!

I thought I give it another major break and test it at just 1 volt output: 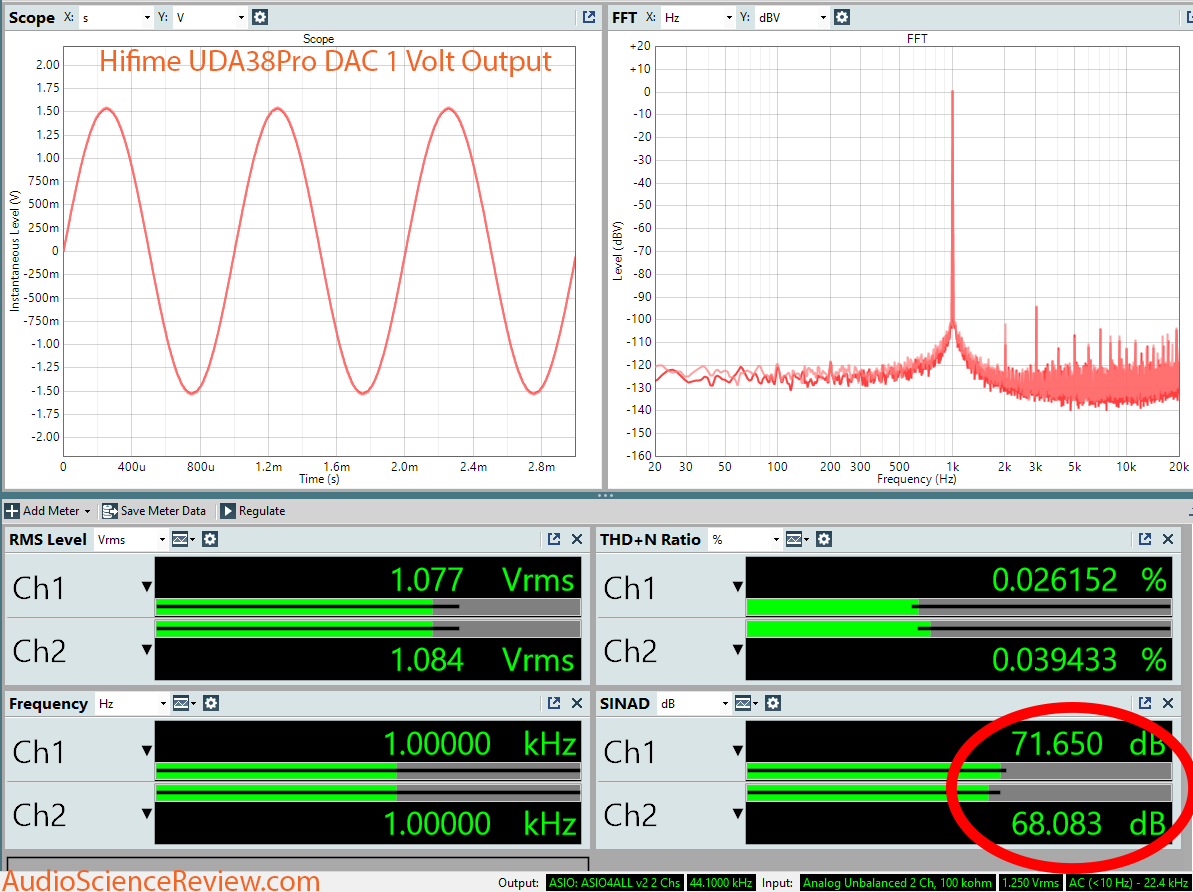 Now we are getting half-decent results but distortion is still two orders of magnitude worse than it should be. SINAD of just 71 dB out of the better channel is still horrible. Company claims this for THD+N in dB:

Yet with 100 K ohm load of my analyzer which is much easier to drive than 32 ohm, its performance is nearly half as much.

This is broken as broken ever comes.

I thought maybe the headphone out would save the unit. No such luck: 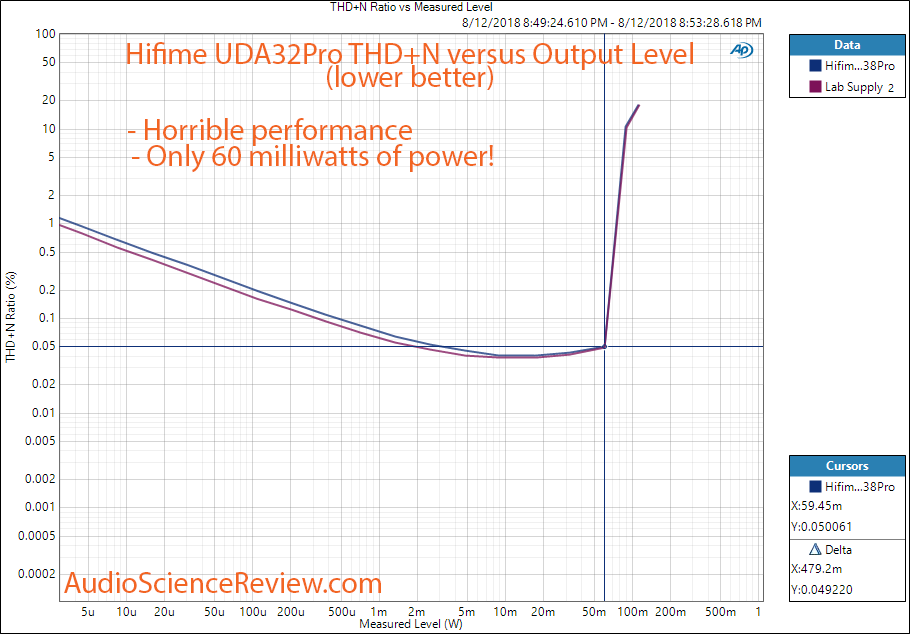 The unit only outputs 59 milliwatts of power at 33 ohm and with very high levels of noise and distortion. Here is what the dashboard looks like at max headphone volume level: 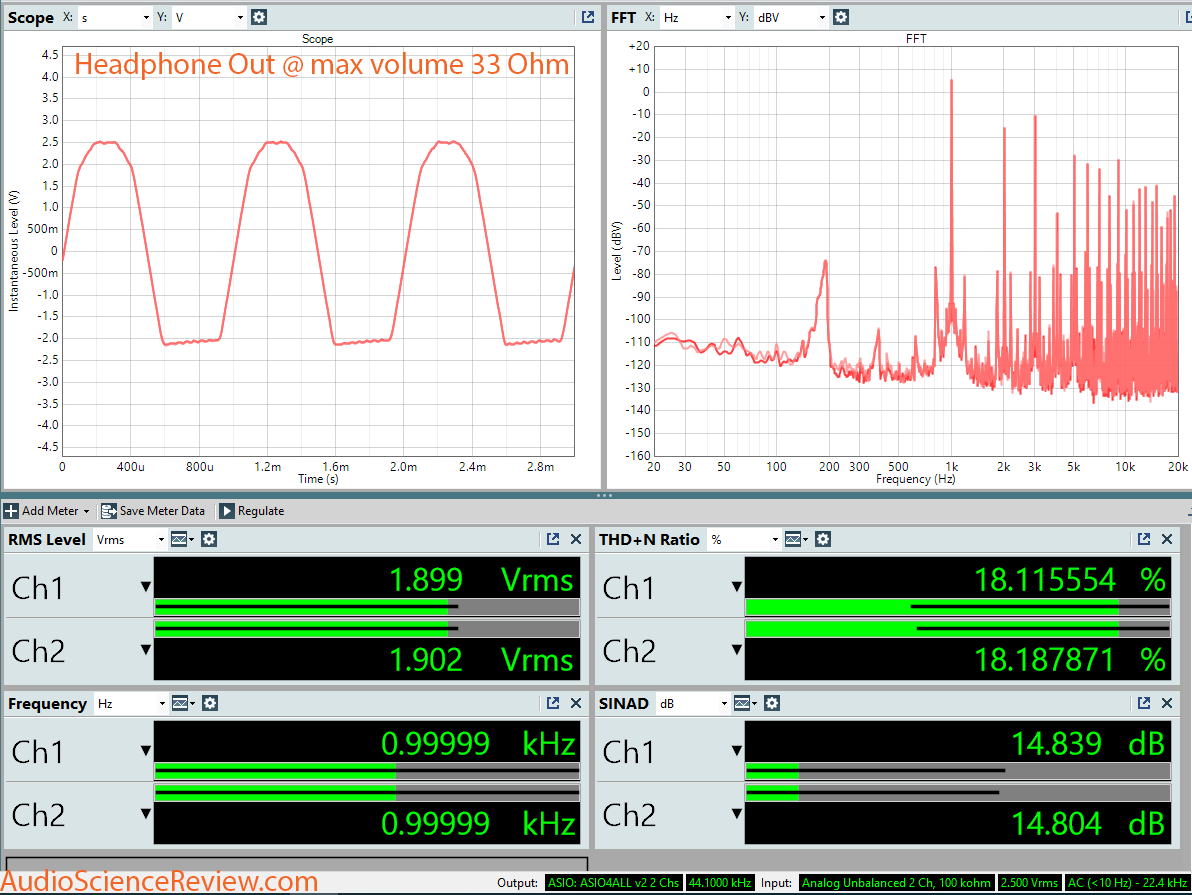 Just 1.8 volts of output with massive distortion. Again, adding the lab power supply made no difference.

At this point I aborted further measurements.

Listening Tests
I connected my Hifiman HE-400i to the headphone out and started to listen. I could not get decent levels out of it until the volume control was around 3:00pm. By then bass distortion was horrendous. Any increase in level would cause them to massively distort.

Using my sensitive IEMs helped the situation a lot by pushing distortion further out to higher levels. You could get good, loud sound without severe distortion. But even there, if I pushed the unit a bit more, bass frequencies would fall apart.


Conclusions
The Hifime UDA38Pro DAC is a completely broken implementation of a DAC and headphone amplifier. It clearly has never been measured or even listened to. I guess it is possible my unit is broken but what is my recourse with the company? They would not even respond to my simple request for where my unit was. Still, I will reach out to them and see if they care.

As it is now, the lesson is clear: do NOT go by what chip is inside a DAC. It is the implementation that matters the most. The DAC chips routinely perform better than the enclosure and designs they are put in.

Look for verification of DAC design through measurements. Hifime provides essentially nothing. That should have been a warning sign.

I was always leery of hifime products. Thanks for the reassurance.

I think this is a new record for worst performing DAC. At least that I can remember from the reviews I've read.
OP

Time to open a "hall of shame" section.
G

amirm said:
Definitely a record.... And at such high price....
Click to expand...
China special!
M

gvl said:
I was always leery of hifime products. Thanks for the reassurance.
Click to expand...
There was a previous review on the hifime sabre 9018 also, and it wasn't great also... but it wasn't a disaster like this.

Wow, I wonder if the inside is just sawdust.

Credit card charge back if they don't refund.
OP

Proof positive that careful instrumented testing is essential, and it's entirely possible to take a first class DAC chip and build a piece of garbage, or Schitt as some would do.
There is no spoon.

amirm said:
I paid with paypal. What is their policy on such things?
Click to expand...
I don't know exactly, but they do have one, and I think it's skewed in favour of the customer, not the vendor.

That is quite horrible!!!

amirm said:
I paid with paypal. What is their policy on such things?
Click to expand...
I think you can file the "items significantly not as described (SNAD)" claim through Paypal.
Clearly, it doesn't work as it should.

amirm said:
Definitely a record.... And at such high price....
Click to expand...
It’s worse than a record lol
independence, we do it together..
https://www.patreon.com/audiosciencereview
G

I'm very happy I successfully fought the temptation to buy this type of devices in the past. Usually the thinking goes like look it is a good price, and they probably used a manufacturer-recommended reference design for the implementation so what can possibly go wrong? Not.
G

For a sanity check need to try an external PSU, just the ESS chip itself draws 100mA I think.

amirm said:
I paid with paypal. What is their policy on such things?
Click to expand...
PayPal policy is simple - if the seller can't prove that they shipped you the item you wil get your money back.

gvl said:
For a sanity check need to try an external PSU, just the ESS chip itself draws 100mA I think.
Click to expand...
That is the first thing I tried. It improved the response by one dB or so.

Here is the strange thing though. It initially pulled 300 milliamps from my lab supply. But after the first try, it doesn't pull much at all yet the red LED on the back lights up. I am thinking the regulator gave out or something even though I am at 12 volt.
Amir
Founder, Audio Science Review
Founder, Madrona Digital
Contributing Editor, Widescreen Review Magazine
Click for My Technical Background
Master List of Audio Reviews

Purchased it beginning this year, been listening to it for about two weeks, wasn't totally overwhelmed with the sound and then when i got the Topping D50 never used it anymore.
These measurements clearly demonstrate why i preferred the Topping D50 over the UDA38pro. And i say preferred because the Topping died on me, halfway in a song it began to stutter and crackle and went dead. Currently using a Gustard X20pro (2 x ES9028pro) and this sounds 100 times better then the UDA9038pro.

As Amirm said, don't buy a product just because it has a top of the line dac chip, implemention is much more important.

This is the third dac Amirm tested with ES9038pro that goes south.
Is this particular ES chip so hard to implement properly?
G

amirm said:
That is the first thing I tried. It improved the response by one dB or so.

Here is the strange thing though. It initially pulled 300 milliamps from my lab supply. But after the first try, it doesn't pull much at all yet the red LED on the back lights up. I am thinking the regulator gave out or something even though I am at 12 volt.
Click to expand...
Weird. 300mA is 3.6 watts at 12V, does the USB spec allow more than 2.5W these days?
You must log in or register to reply here.
Share: Facebook Google+ Reddit Pinterest Tumblr WhatsApp Email Link