Review and Measurements of DACPort HD and Dragonfly Red

This is a review and detailed measurements/comparison of AudioQuest Dragonfly Red and CEntrance DACPort HD portable, "thumb drive" sized DAC and headphone amplifiers. Both are kind loan from members. The Dragonfly Red retails for USD $200 from Amazon and DACPort HD for $179.

Physically the DACport HD is fair bit larger than Audioquest although in grand scheme of things, the differential is small: 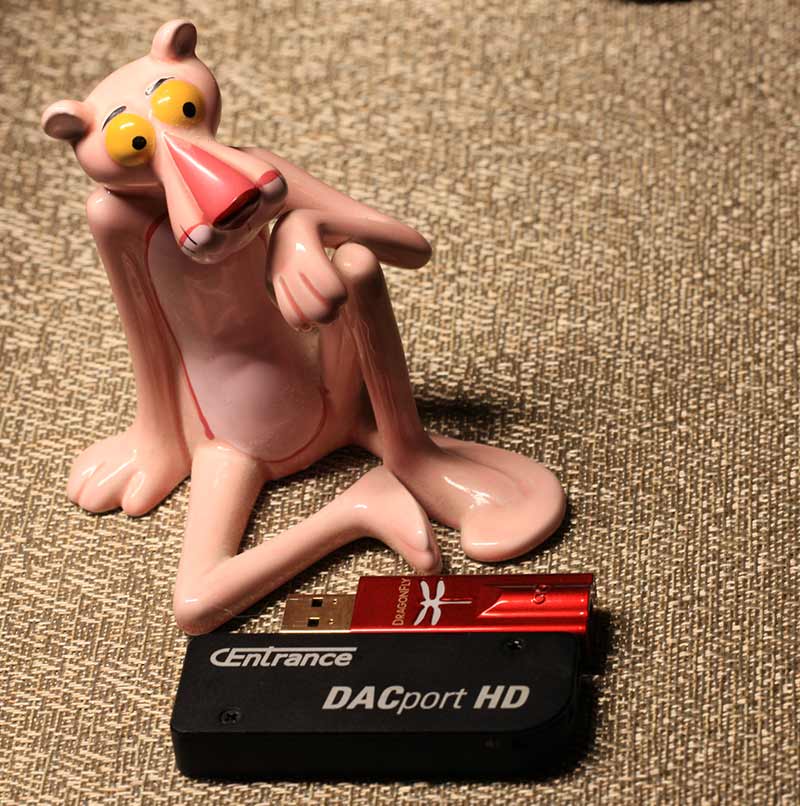 The Dragonfly Red is made out some kind of metal and runs very cool. The DACPort HD is made out of lighter weight aluminum and runs fair bit warmer.

The DACPort HD has volume control and low/high gain, neither one of which exists on AudioQuest Red. It also supports a range of formats up to 384 kHz PCM sampling and DSD while the Dragonfly Red is stuck in the last decade, limited to 24-bit/96 kHz PCM only.

The DACPort HD requires a cable to connect to USB Port. The Dragonfly as you see just plugs in.

Let's get into measurements and see how they compare. 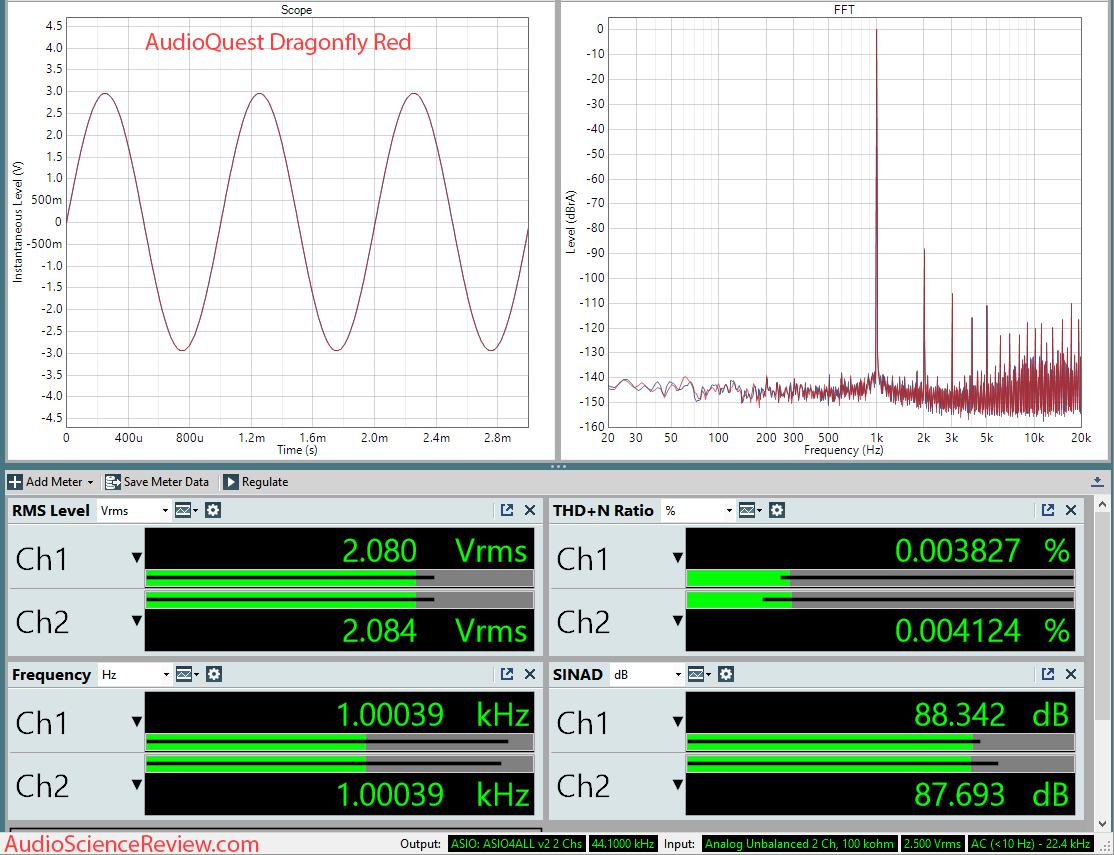 Nice to see 2 volt output which means you can use this as DAC with the same nominal output that desktop DACs have. Distortion/SINAD though is not so hot though. Here is the DACPort HD: 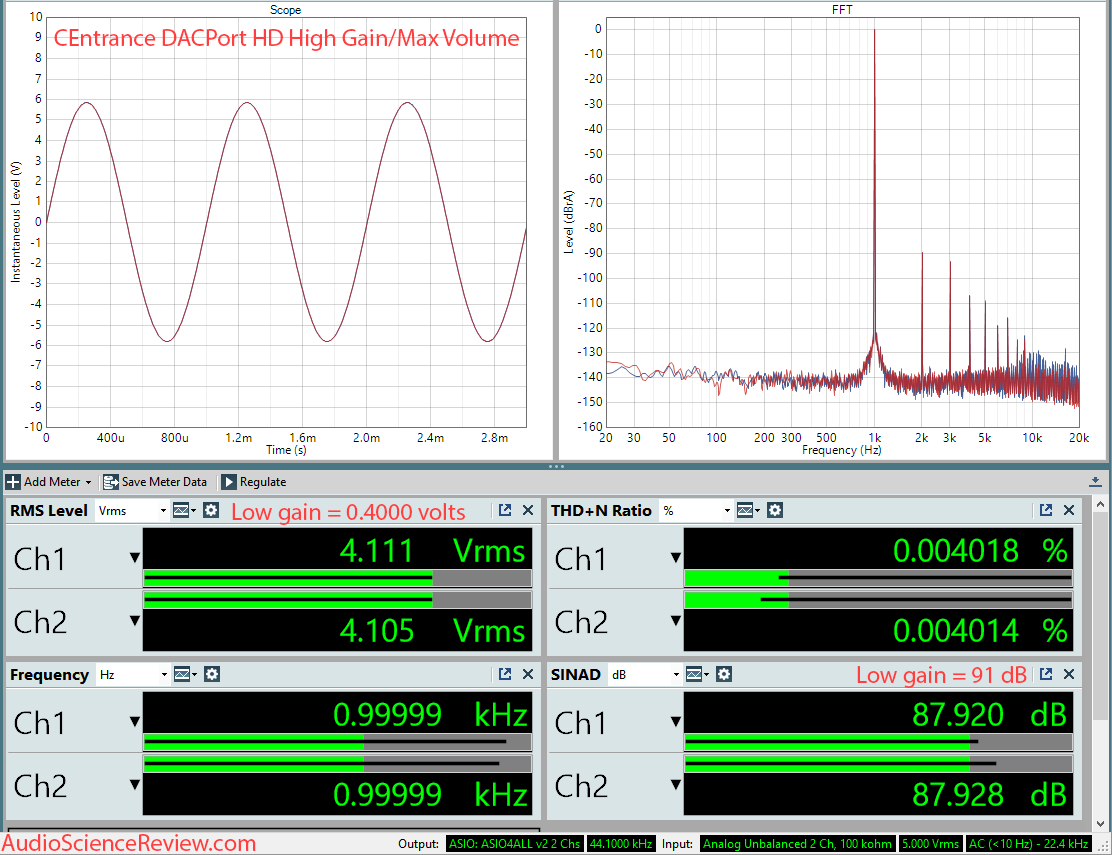 Voltage output jumps up to more than 4 volts which bodes well for the amount of power it can product. Distortion remains the same though although you gain a few dB by using low gain mode.

Putting them both in context of DACs tested (portable and otherwise), we see them land at the top of tier 4 or bottom of tier 3: 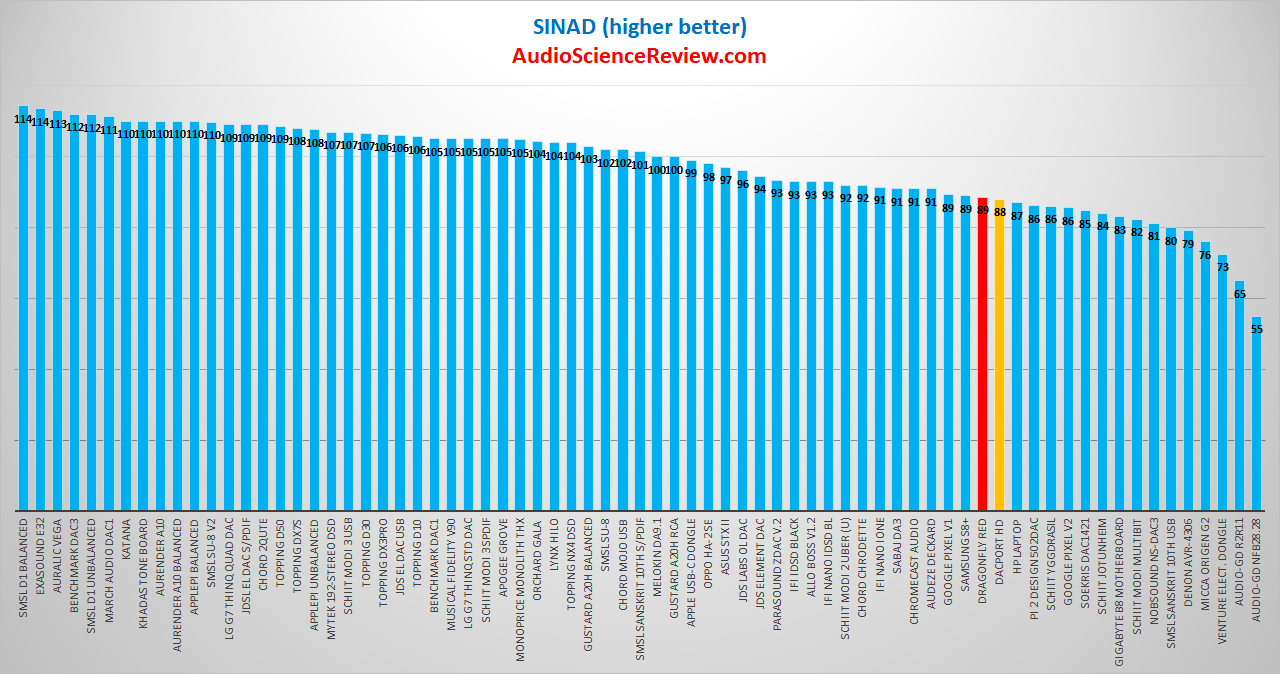 Let's test the intermoduation distortion but unlike before, the IMD is plotted against output voltage as opposed to input digital value: 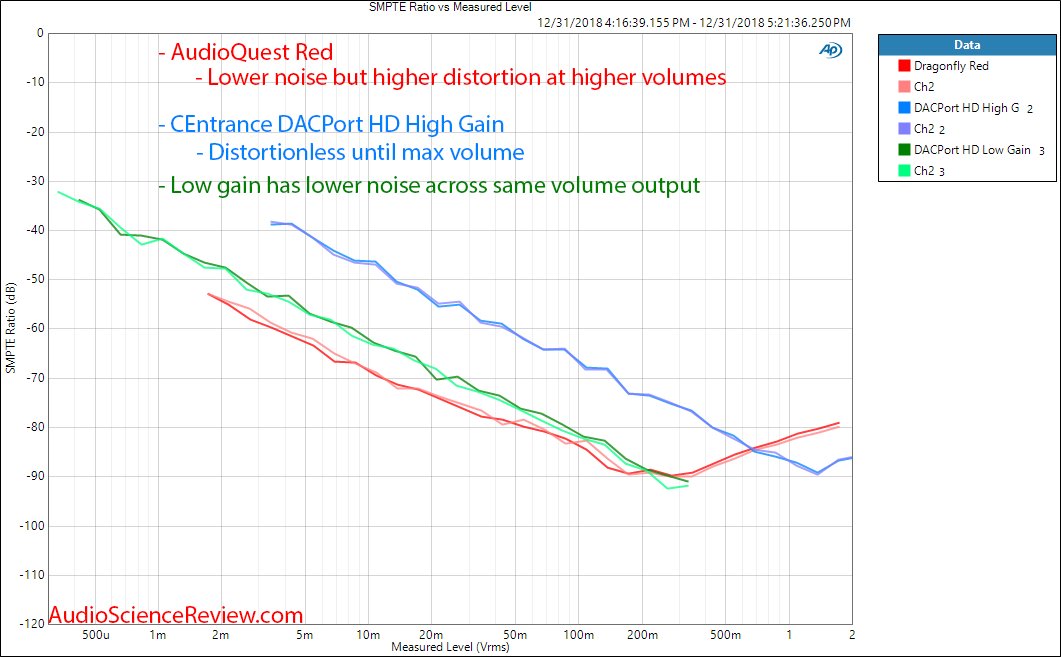 In high gain mode, the DACPort HD has higher noise which dominates the performance until the end. The Dragonfly Red has much lower noise but its output starts to saturate pretty early and distortion rises as a result. Low Gain in DACPort though nearly matches the noise floor of Dragonfly Red so you could have that performance with DACPort also.

Jitter and noise is comparable: 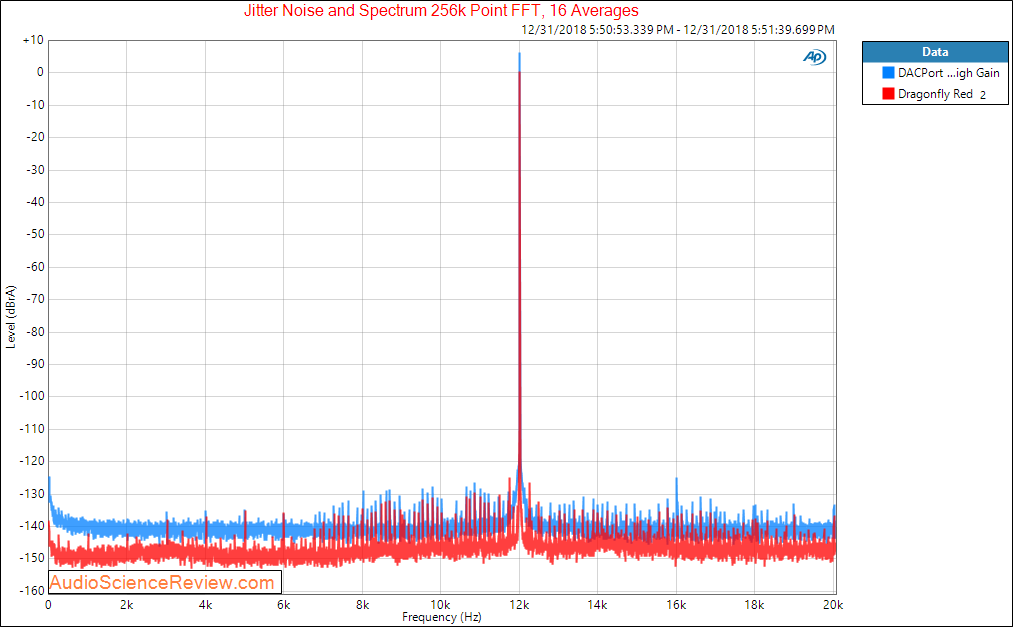 Both are doing well here and there is no audible concern.

Let's look at all important power versus distortion starting with 300 ohm load: 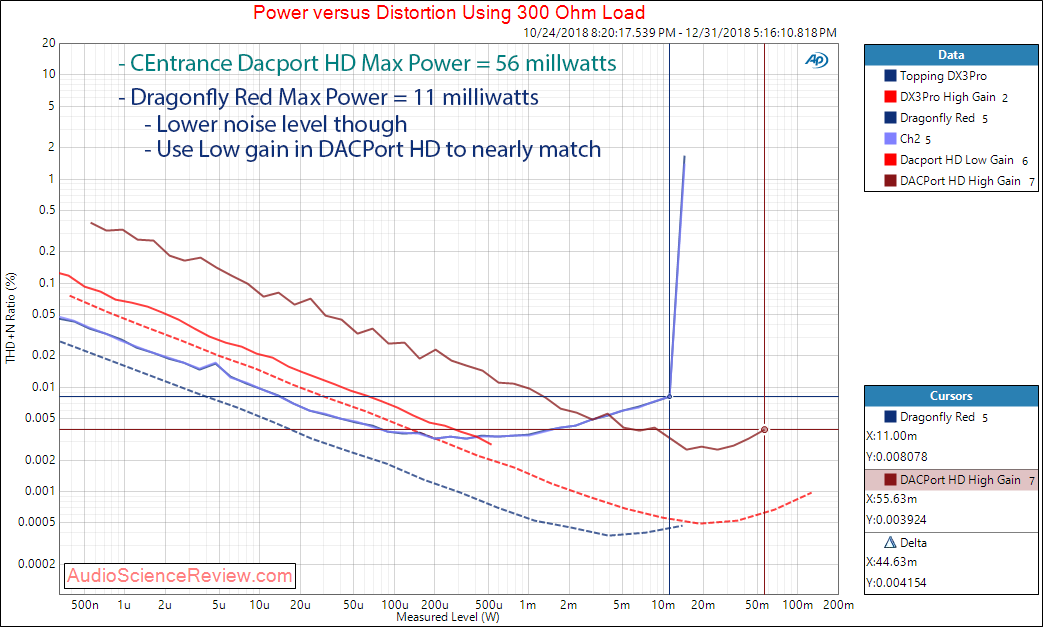 The same performance as IMD test repeats here except we can now quantify the amount of power. Clearly the DACPort HD is more capable, producing 5X more power than Dragonfly Red. Same theme continues at 33 ohm: 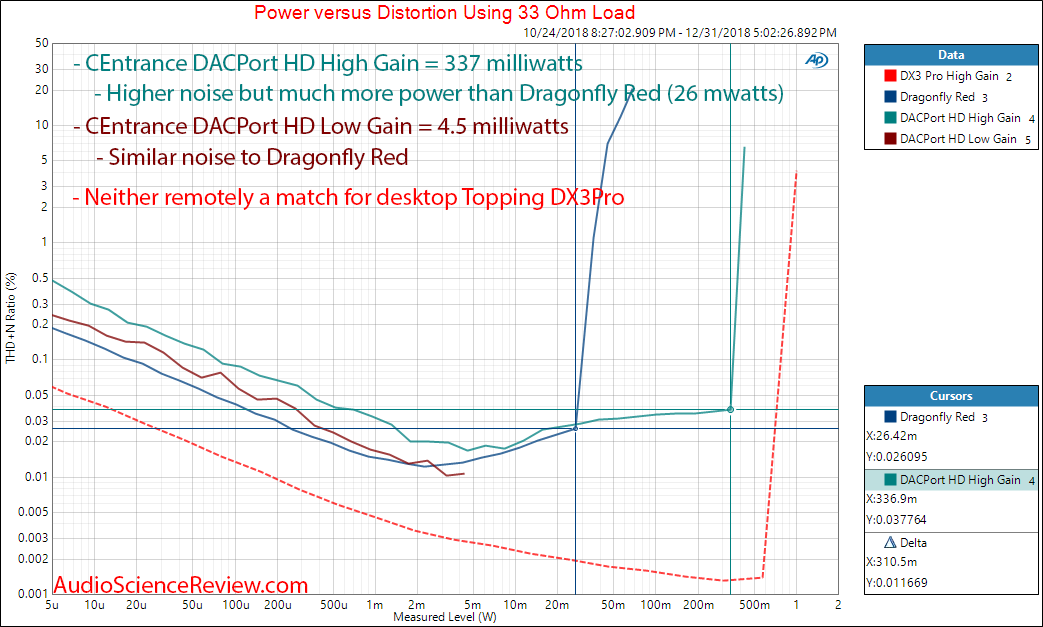 Here the gap widens even more with DACPort HD in high gain producing an astonishing 0.3 watts of power! This little guy as a lot of mojo under its unassuming case.

Putting all of this together against other small USB DAC & Amps, and sorting based on power at 300 ohm we get: 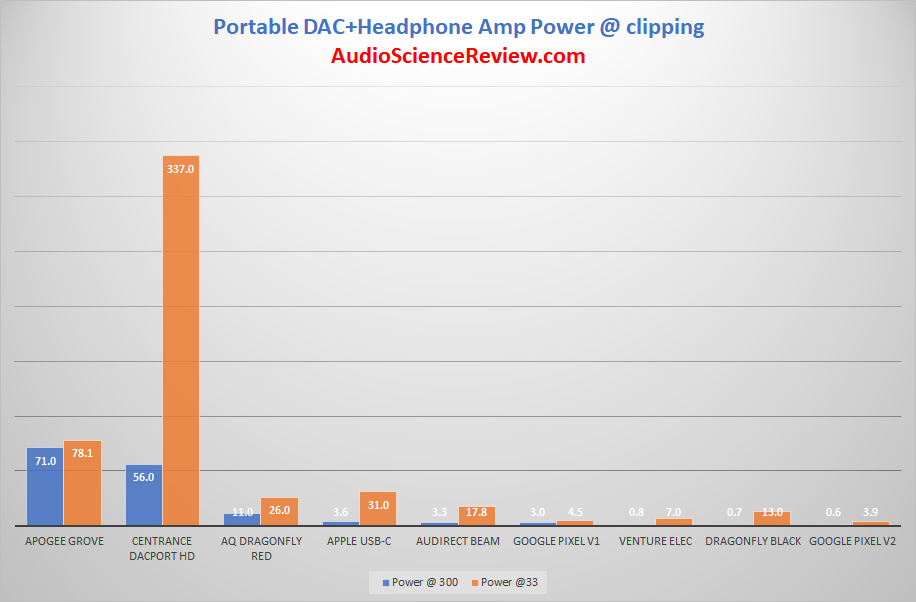 That is a commanding lead for the CEntrance DACPort HD. It has a bit less power in 300 ohm compared to Apogee Grove but then runs circles around it at 33 ohm due to much higher current availability. The tiny USB-C dongles disappear in the dust.

Output impedance is similar although the Dragonfly Red has the edge: 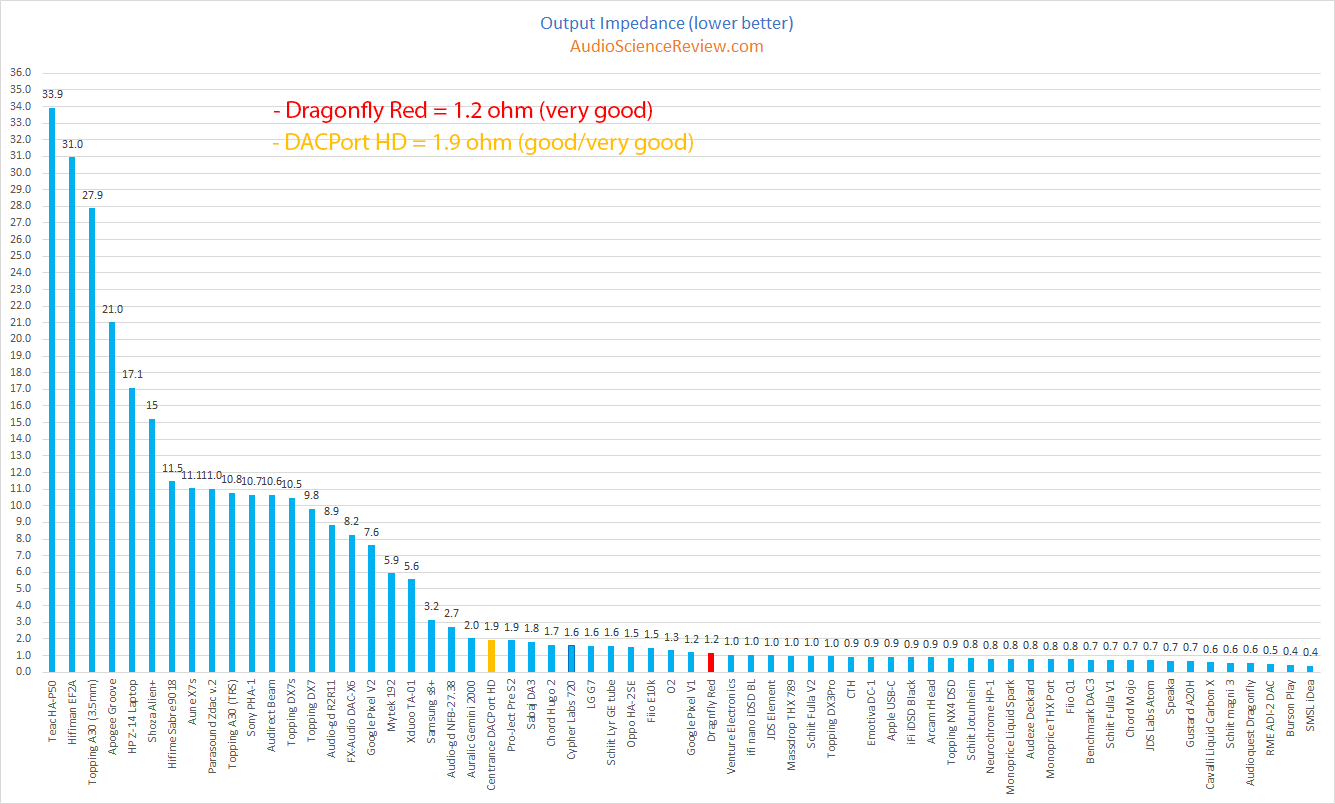 Neither should be a concern for all but lowest and wildest impedance headphones you may find.

Since the DACPort HD has a volume control, I decided to run the channel balance test against it: 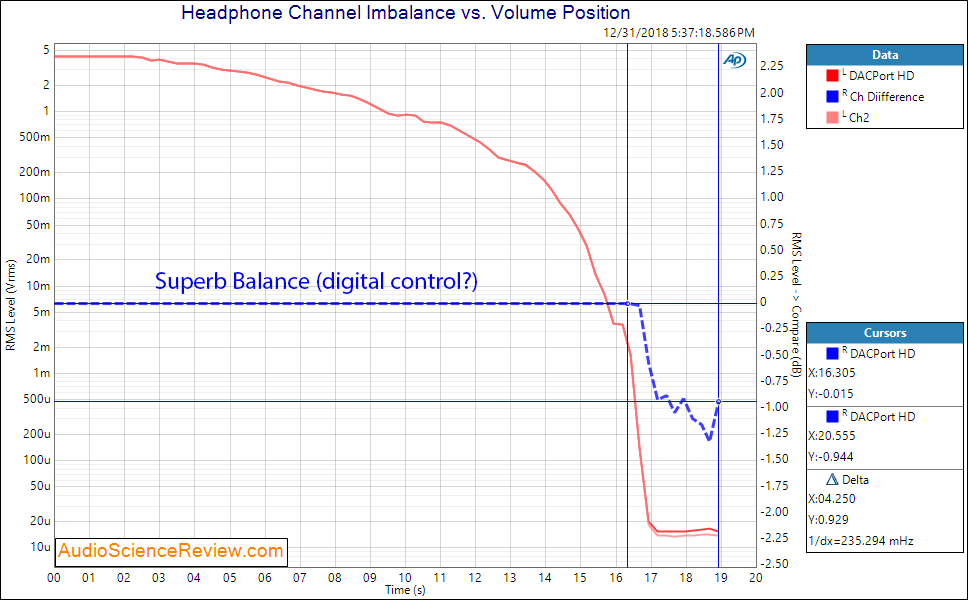 Boy, I did not expect this. The volume control feels like a cheap little potentiometer which I predicted would have horrible balance. Not so at all. There is zero deviation until the end, indicating that it is a mono pot that is sampled. That digital value is likely then used to change the volume in the DAC chip. Very nice!

Listening Tests
I hooked up both units to my AB selector, ganged both units in Roon and started to play my bass heavy headphone test tracks. At similar volume, the fidelity is close but the DACPort has clear headroom. Increasing its volume past what Dragonfly Red could deliver resulted in much more satisfying bass with HD-650 headphones. Highs remained cleaner and the better dynamics resulted in nicer sense of space around instruments. While I had to keep the Dragonfly Red at max to get "pleasurable" volumes, I could operate the DACPort HD at 70 to 100%.

Similar story repeated with Hifiman HE-400i. The DACPort HD makes you almost forget you are generating music out of this little box. The Dragonfly Red not so much.

Fascinating thing happened with this track from Laurie Anderson called My Compensation,

It is a mix of deep bass and vocals. The DACPort HD handled it fine but on Dragonfly Red the sound would constantly mute/volume limit. Clearly it lacks sufficient power reservoir to handle the peaks in this track.

Conclusions
I have gotten many requests to review the CEntrance DACPort HD and have not had time to review it until now. It is a shame because this is one performant thumb-drive sized USB DAC and Headphone amp. It powers headphones that normally would require desktop DAC and Amps. It doesn't put those products to shame but does with other small devices. Its features such as dual gain settings and perfect channel balance nicely add to the equation. As such, the DACPort HD gets my recommendation for this class of devices.

The Dragonfly Red would have done much better had it not been in the presence of DACPort HD. It costs more, has less features and has outdated format support. So I can't really recommend it even though I understand its popularity.

Not that it's entirely surprising but I think it's worth mentioning that another competitor that was reviewed a while ago, the Schiit Fulla V1 and V2, doesn't perform as well as these.

It would be cool if you post the SINAD graph for the SMSL iDEA and the DragonFly Black, in order to compare with these.

Did the Dacport work without installing Centrance universal driver? It's been a while but I thought it was required, at least with the Slim version I have.
OP

gvl said:
Did the Dacport work without installing Centrance universal driver? It's been a while but I thought it was required, at least with the Slim version I have.
Click to expand...

Merkurio said:
It would be cool if you post the SINAD graph for the SMSL iDEA and the DragonFly Black, in order to compare with these.
Click to expand...

very nice DAC, for a small usb type one
D

Could you try comparing the two DACs' current draw levels under various loads and output levels? I'd be interested in learning how efficient the DACPort HD is for mobile usage, both when used with sensitive IEMs and with harder-to-drive headphones.
OP

I used to have the non HD version of this. I sold it within a month, and I can't seem to recall why.

Afaik, the Dacport is a power hog and not all that suitable for mobile use as the output buffer is biased to run in class-A mode or close, that's why it runs so warm.
B

gvl said:
Afaik, the Dacport is a power hog and not all that suitable for mobile use as the output buffer is biased to run in class-A mode or close, that's why it runs so warm.
Click to expand...

Now I remember, I was trying to use mine OTG and it burned me.

bigx5murf said:
Now I remember, I was trying to use mine OTG and it burned me.
Click to expand...

Yea, it was in my pocket rubber banded to my phone. Living in 120F ambient temps and being outside all day probably didn't help.

Hello, I have a thumb drive DAC and headphone amplifier called MUSILAND MU2PLUS. The device is from China and its core uses a "CS43130M" so I will easily get a "1.7VRMS" signal. I got some interesting results through "RMAA" 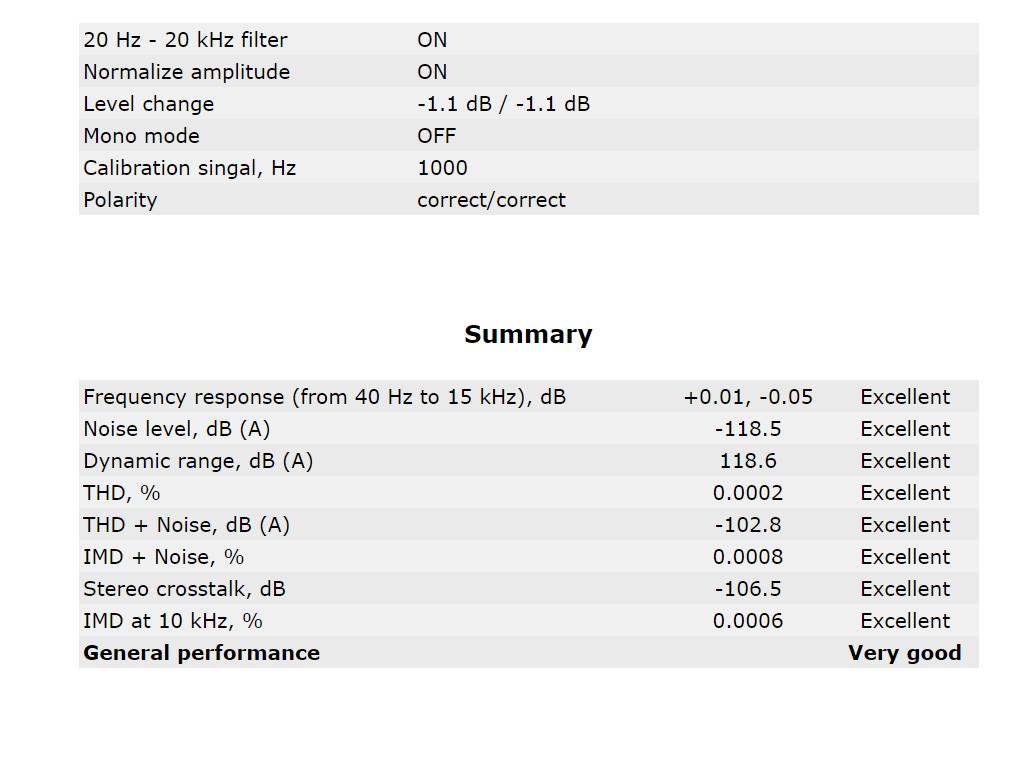 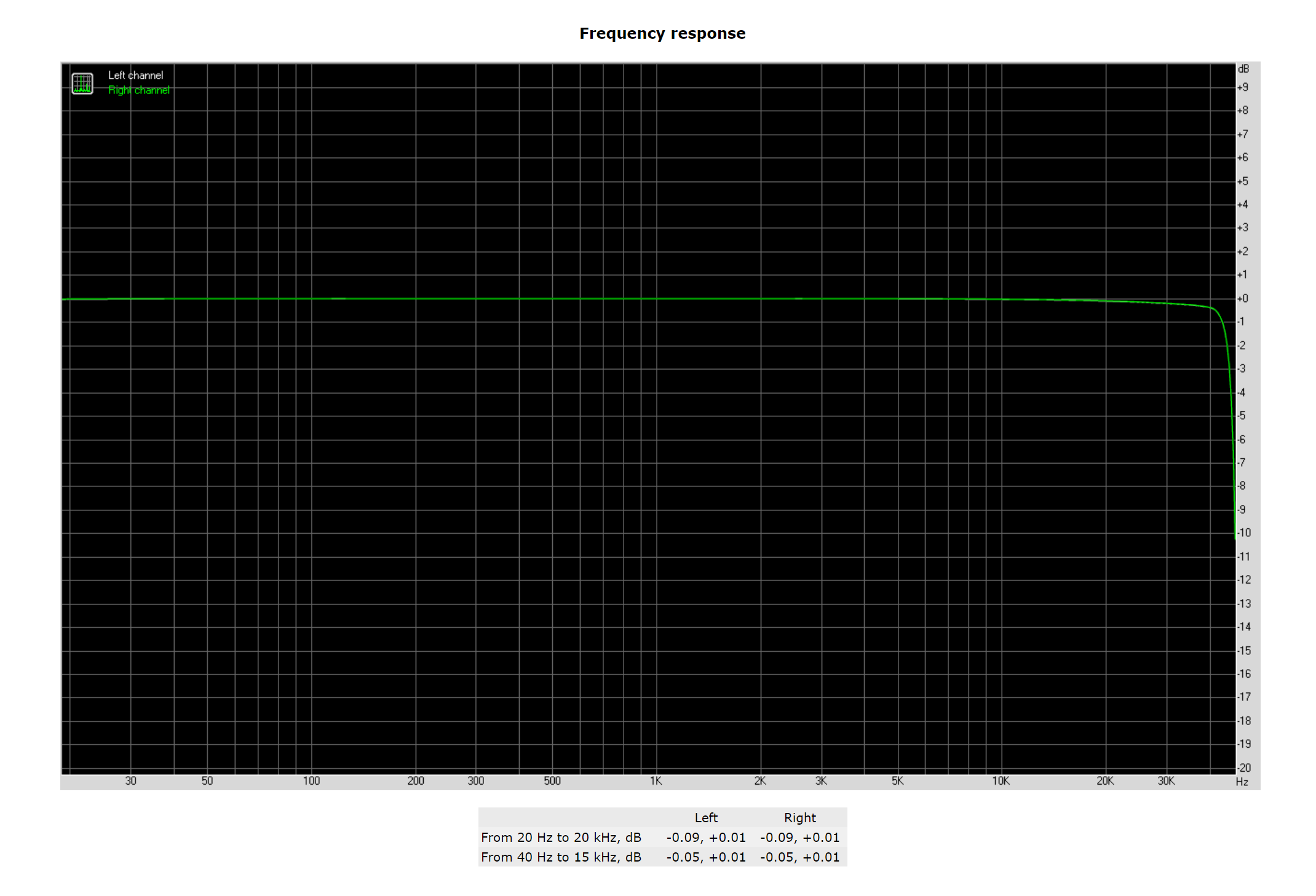 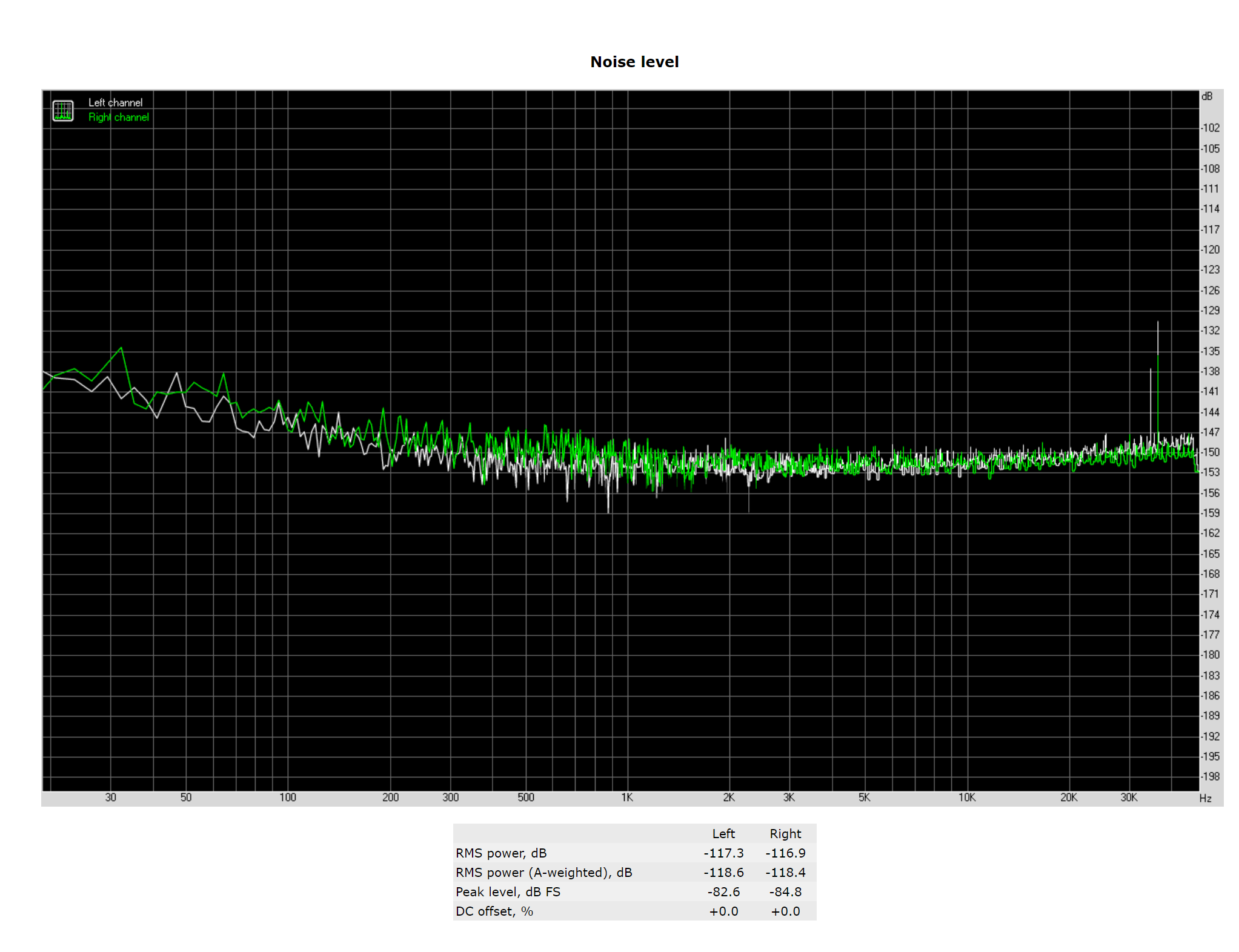 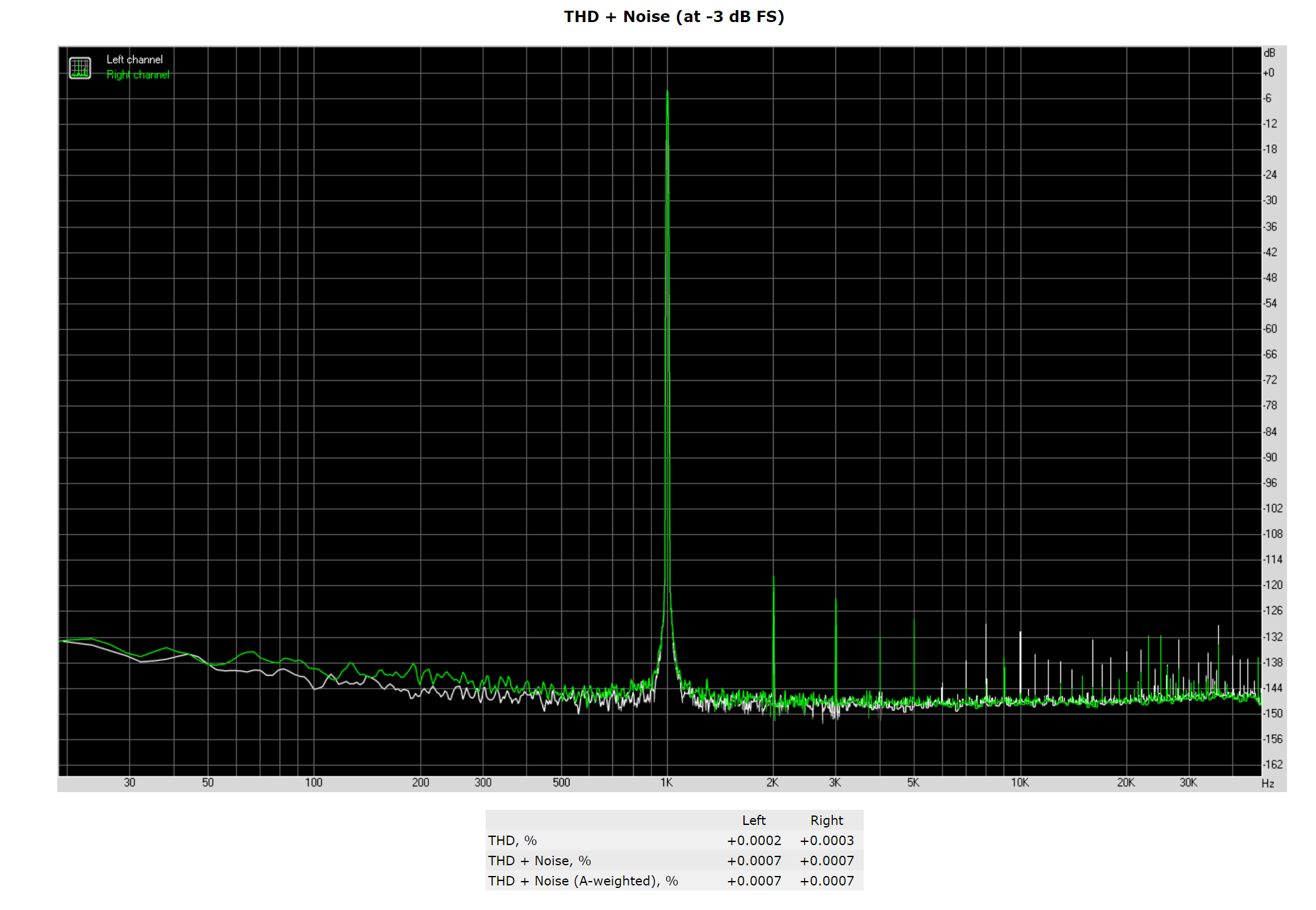 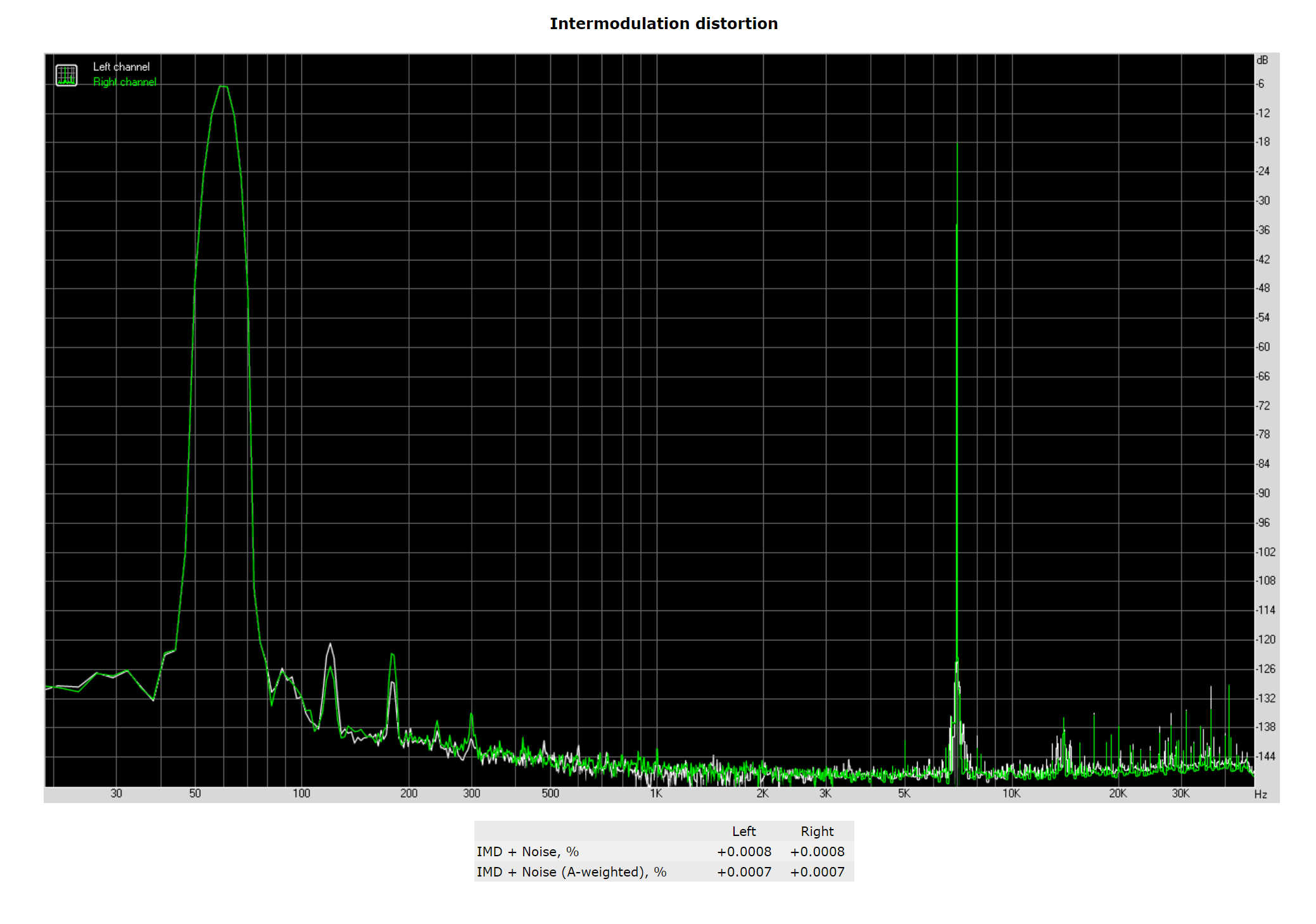 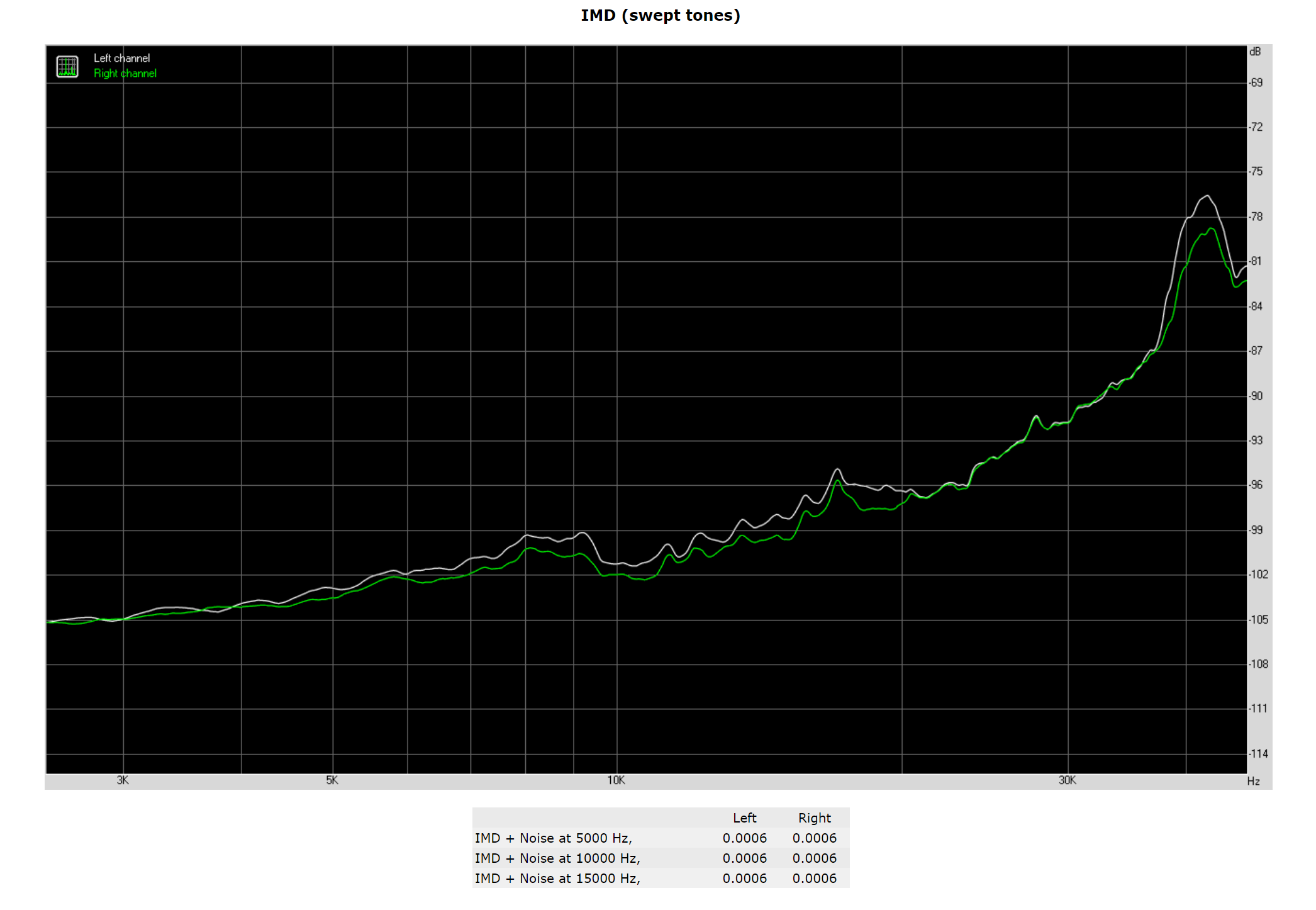 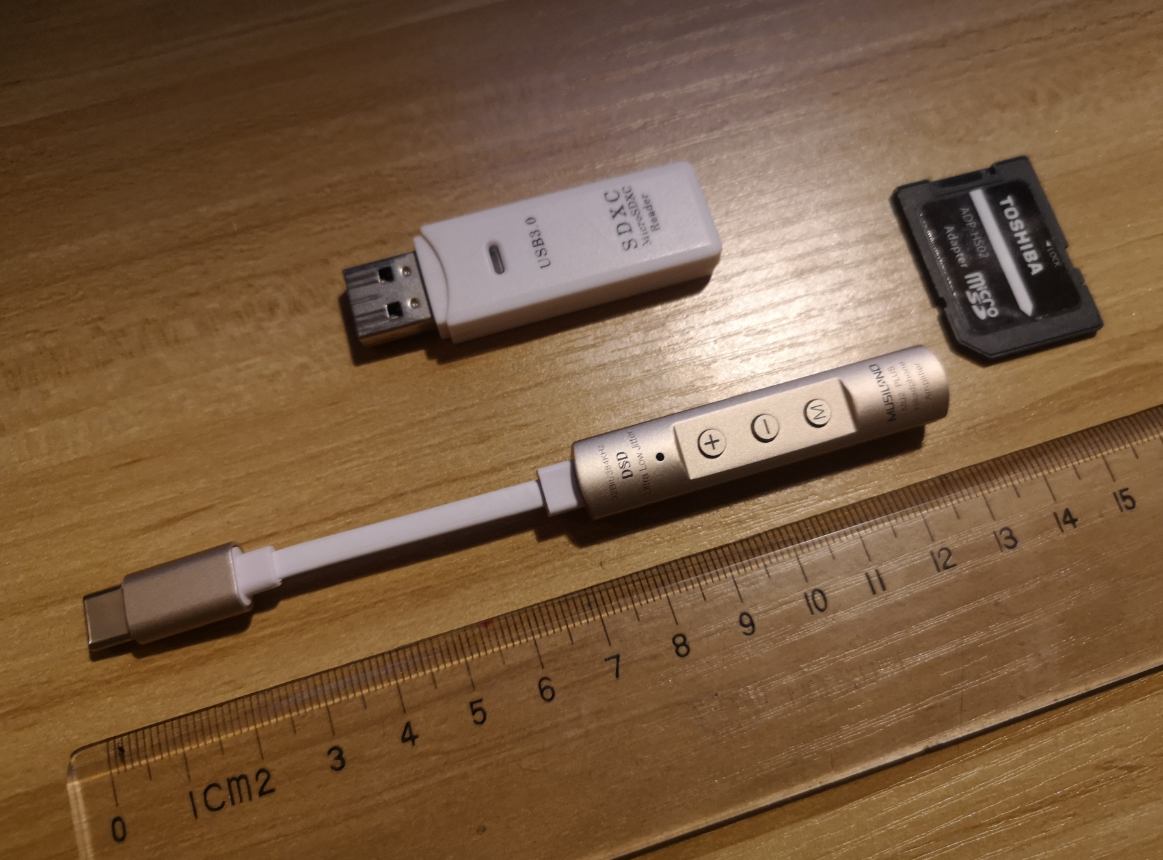 Happy New Year! Thanks for the review!
P

I expected worse results because of some online discussions.

I have both (slim version of DACPort, less power and formats support) and haven't felt like either of them lacks power, except maybe for 600 Ohm headphones.

By the way, some reviewer made a big deal of DACPort having 10 Ohm impedance, but here we see it's under 2 Ohm in reality...

This would've been the perfect scenario to also include the Cyrus SoundKey, which is also still a current device but, like the Dragonfly, stuck in the last decade ...
J

Nice to see the DAC port live up to its good reputation, a few have recommended it to me as a great product at a great price and this test supports the recommendations. The Audioquest looks to be a good product too, it is a bit annoying that Audioquest peddle so much snake oil when their headphones and DACs demonstrate that they are capable of engineering excellent products.
I used to fly, but I go the modern way now, by bus.
You must log in or register to reply here.