My Planet recently began skipping and so I thought I'd give the tracks and lenses a clean. One of the wires to the lid sensor was frayed and so I took the sensor off and desoldered the wires from the board to make fixing it easier. Things were left in that state till after work the following day, now I cannot find the sensor anywhere. Its part number, written on it (luckily I took note) is A41e 710.
Does anyone know exactly what this is or where I could get another ? Its approx 5 mm square and has 5v, ground and signal terminals, on the board its referred to as the lid switch.


Thanks for any help.

The first step would always be to contact Rega and ask whether there are replacements available to purchase anywhere. For such old products, it can be nigh impossible to find original replacements, though.

Is this any help?:

Step one, contact Rega and ask nicely- they'll have one most likely. If they say they don't have any, ask them what it was specifically.

If no luck, get back to us here. I have heaps of lid/mech/limit switches, so don't be too worried.

If it has three wires/connections, it is either a two state (NC/NO) switch or it could be an optical (photo interrupter). Did it have visible leaf contacts or was it enclosed? Was there a lever or button/gap or how was it activated? Was it silent in operation or did it click like a microswitch?
Ricky Roma: I subscribe to the law of contrary public opinion... If everyone thinks one thing, then I say, bet the other way...

Could it be a hall effect sensor?

Berwhale said:
Could it be a hall effect sensor?
Click to expand...
Absolutely. The only schematic I can find shows it as a hall sensor. 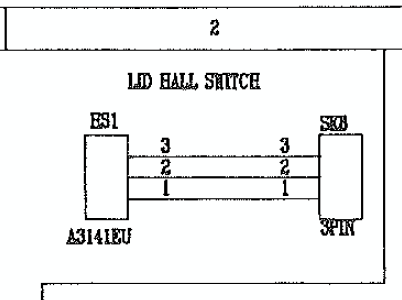 Mystery solved.
Ricky Roma: I subscribe to the law of contrary public opinion... If everyone thinks one thing, then I say, bet the other way...
OP
D

It was a solid state unit that was held in place on the underside of the top casing by a strap. This makes me think it may be a magnetic proximity type ( Didnt know they were known as hall effect sensors).
The 3 connections (wires) were connected to a small pcb with contactors to holes where the wires from the board were soldered. Its operation was silent. I've emailed Rega for info as to what it was specifically .. hopefully it will be good news from them. Thanks for the replies.
I'll remember this site you'r a right helpfull bunch .

Desmo67 said:
I'll remember this site you'r a right helpfull bunch .
Click to expand...
Remember to come back and post your solution to this thread. Take a few pictures of the fix. It may help someone else down the track.
Ricky Roma: I subscribe to the law of contrary public opinion... If everyone thinks one thing, then I say, bet the other way...
OP
D

Count Arthur said:
Is this any help?:

There's a whole bunch more here: https://www.cricklewoodelectronics.com/CD-and-DVD-Laser-Mechnaisms.html
Click to expand...
I used CD-Player-DAC-Transport List (narod.ru) to find a donor for the cd transport mech KSS240A, a Sony CDP M12 cost £30 off ebay .. luckily in perfect working order .. plays all the CD's the planet skipped on no problems. Just waiting for some solder, 4 replacement diodes for the power section and the Hall sensor and all should be sorted again.

As I only use it as a cd transport (plugged into an MDAC) I'm not sure if I should bother with replacing the electrolytic capacitors on the board?

Desmo67 said:
I used CD-Player-DAC-Transport List (narod.ru) to find a donor for the cd transport mech KSS240A, a Sony CDP M12 cost £30 off ebay .. luckily in perfect working order .. plays all the CD's the planet skipped on no problems. Just waiting for some solder, 4 replacement diodes for the power section and the Hall sensor and all should be sorted again.

As I only use it as a cd transport (plugged into an MDAC) I'm not sure if I should bother with replacing the electrolytic capacitors on the board?
Click to expand...
I kind of got the wrong end of the stick when I read your original post, I saw "lenses" and "sensor" and thought you were talking about the laser mechanism.

Regarding the capacitors, these can last a very long time. They don't last as long when they are used at or over their temperature specifications in things like hot power amps; especially if you leave things powered up all the time. If you switch things off when they are not used it can take many years to rack up 2 or 3,000 hours of running time, and in low power stuff, like CD players, things shouldn't get anywhere near 85 degrees C, so they should last significantly longer.

You can have a good look at the capacitors, they sometimes bulge when there are problems, but not always: https://www.capacitorlab.com/visible-failures/
D

The Planet was a very popular £500 - £600 player (clamshell case type?) and I sold many of them. Rega are good gys when it comes to service and as I understand it, they can supply parts still BUT ALWAYS BEST TO ASK THEM!!!!! Hopefully you can get what you want. You may need to go through a Rega dealer though - in the UK, your contract is via the dealer and even a twenty year old player should be addressed via a dealer first. Hopefully said dealer won't be so up themselves that they can't or won't help you (takes one to know one and I've been there, done it much to my shame in decades past - but hopefully learned many life-lessons along the way).

It's a specialist niche device outside of a Rega system (we sold it with Remote, Couple interconnect (Klotz AC110 with Neutrik Pro plugs) and into a 'clamshell' Mira amp) and the 'sound' was always very good for fifteen hundred quid with Jura speakers, the first version of which I loved with a port tweak and spesaker cables which didn't upset the sparkly highs too much.

Since the thing is now so old, if you can get it working properly again and feel an update is possible, have a look here - http://www.acoustica.org.uk/ and scroll to the Rega Planet page

DSJR said:
Jura speakers, the first version of which I loved with a port tweak and spesaker cables which didn't upset the sparkly highs too much.
Click to expand...
Out of interest, is that the mod to put the port at the front of the Jura?

The first Jura had two issues - boom and tizz. Inside the box as I recall, there was a slatted partition above the port tube, so the thing had been thought through to a large extent. All I did was to buy a 50p basic bath sponge, cut it in half and put it in sideways in the port, minimising the air-flow. Easily removed but on the mk1 Jura, it fixed it for us, the bass remaining fairly extended but still 'tuneful' and quite articulate (in audiophool terms). The last gen Ela in comparison (which became a slim tower over the wedge shaped little floor-stander) totally lacked bass and tonal 'substance' for me. Why anyone would bodge the port further I've no idea when the bodge above worked so well and for pennies...

the Jura tweeter was a Tonagen thing I believe and a bit 'lively' (without seeing measurements). At the time, Cable talk did some good speaker cables with no perceived hf 'hash' (I'd love to do an a-b again of their identical looking 3.1 and 4.1 dumbbell types) and with the Planet linked to the Mira as described in my earlier post and with 4.1 speaker cables, a very satisfying little system of the times for UK size rooms (long before the days of cheap Chinese made speakers although Quad did well with the popular 11L if anyone wants to look that one up).

Sorry for the thread crap here. Rega revised the Jura into a mk2 model with the drivers pushed closer and further to the top of the box as I remember (I can't remember which version has the black band around the 'base') and these lost all the bass I remember and all but screamed at you! Remember Rega are primarily 'vinyl people,' their main dealers tend to live in a kind of 'splendid isolation bubble' away from the stuff being reviewed and recommended here and their own MM cartridges have quite a severe hf suckout right where the Jura and others in their family could project too much. useless for neutral sources though, even the Planet unless they were jammed into corners.

All good fun for me and it's disappearing fast into ancient history. Current similar size RX3 speakers are double the price and much more 'solid' than the Ela or Jura ever were and rather more 'tamed and benign' in tonal balance, but still 'communicate' well. As I've moaned before, absolutely no idea how they'd (say, Brio R driven) begin to compare with some of these smaller active 'prosumer' models today for a couple of grand the pair or less..
Last edited: Feb 23, 2021
You must log in or register to reply here.
Share: Facebook Google+ Reddit Pinterest Tumblr WhatsApp Email Link