amirm said:
You mean by not specifying any distortion, noise, or really anything other than wattage?
Click to expand...

I had not bought an amplifier without the manufacturer specifying level of distortion, noise.I had asked myself the question why it is not specified.I think the answer to that question regarding Rega IO can be found in your review.

With that said, Rega is not doing anything illegal. Perhaps cowardly not to specifying distortion, noise but not illegal.

I suspect that Rega probably knows its performance but do not want to report it but think that it is enough that the brand Rega itself sells. So maybe it can be?

Or Rega just ignore creating an amplifier with sensible levels of distortion, noise.

Developed construction in a hurry due to ...

One can speculate, but in the end of course I do not know the reasons why it came about that this IO turned out the way it did and yet it ended up on the market.

Edit
Additionally, I wrote this in the sister thread about IO
More information before a decision to buy is good so it is great that Amir tested IO.

So I really appreciate you testing what's related to HiFi.
Last edited: Nov 3, 2021

DanielT said:
I had not bought an amplifier without the manufacturer specifying level of distortion, noise.I had asked myself the question...
Click to expand...

"...I won't bother unless those specs come from the trusted lab-bench of some dude w/glasses named @amirm?"
Stop the Hooligan B*st*rds and their Shenanigans!

pseudoid said:
"...I won't bother unless those specs come from the trusted lab-bench of some dude w/glasses named @amirm?"
Click to expand...

Even better of course. However, if a manufacturer specifies something ( it does not only have to apply to Hifi) the manufacturer is aware that what is stated may be tested to see if what is claimed is true.

NHL99 said:
Tracing the origins, design based on 'Wireless World magazines dating from the late 40’s to the 70’s'.
Click to expand...

How loud is loud, how to measure it? Is THX calibration bad for your health?
What is the LP frequency of your subwoofer(s)?
What type of amplification do you use if you use one or more subwoofers?

sarumbear said:
Transistor amplifiers in the 40s?
Click to expand...

It's all a giant conspiracy. They existed (in secret).

Marty took a bag of modern transistors back in the De-Lorean and gave it Bardeen, Brattain and Shockley at Bell Labs in 1947. They fast tracked "their discovery" so Steve Wozniak would eventually build the first Apple in his garage and Elon Musk's mom planned it all so when he grew up, he'd become the world's richest man and eventually send humans (back) to Mars.

Why are those horns facing back? And, they are too close together. Staging will suffer.
Co-designer of Silver 5L
BSc, MSc (EE, Imperial College, London), MA (acoustics, Surrey University, UK)

How loud is loud, how to measure it? Is THX calibration bad for your health?
What is the LP frequency of your subwoofer(s)?
What type of amplification do you use if you use one or more subwoofers?
E

GimeDsp said:
I request you fry some bacon and eggs on it.
Click to expand...

I recall the '70s derogatory terms "Japanese Watts" after the HeathKit craze died out.
Stop the Hooligan B*st*rds and their Shenanigans!

May I suggest that 'Japanese Watts' was more about higher voltage output with feeble current. Into the 80's newer wave of 4 - 6 ohm speakers with all manner of reactance. This is one area where many UK amps could perform better, even if THD, IMD and so on went out the window,

Just to refresh our younger readers as to what was thought acceptable forty years ago - an early 80's HiFi Choice test on the UK-revered Naim 32/250 (could have been the small SNAPS preamp supply) had distortion at rated power into 8 ohms as -80dB, and -63dB at 20lHz. IMD (19 + 20kHz) was a mere -69dB. Just think what fun Amir would have tearing into one of these sets fully restored? Modern Naims are around 10 to 15dB better (and in my opinion, 'sound' a bit cleaner for it) according to Stereophile, but still....

Restorer John may remember this, but the same 'Choice book' tested a Pioneer PM 44 which measured well with claimed poor sound quality and in another issue, the two Sony ES integrateds (a 500 and 700 I think) sounded poor apparently (loose bass was one criticism). I'm starting to wonder if even by this time, reviewer ego and personal tastes were starting to heavily creep in to the judgements, unless some measurements were being left out. the followup test book left the IMD distortion figures off the reprinted Naim review for example. While I have the HFC 'Issue 50' here, the Io's distant ancestor Naim Nait (15 - 20WPC and now a quite valuable used collector's item) measured distortion at rated power as - 20Hz = -66dB, 1kHz = -72dB and 20kHz = -51dB. IMD at rated power 19/20kHz was -70dB and -52dB at '0dBW' on the phono input (RIAA was all over the place, but intentional I think and worked with the crap cartridges we used to sell back then, all with lf lift and presence suck-outs).

A Creek 4040 which in price is where the Io would be if made back then, was worse. THD ranged from -60dB, -69dB (1kHz) and -51dB at 20kHz and IMD as mentioned above was -57dB and -27dB on the phono stage, not that the latter figure mattered overmuch with the cartridges used as said above.

So, with that kind of UK spiritual ancestry, I honestly think the Io isn't 'bad' at all
Tear down these walls, Cut the ties that hold me, Crying out at the top of my voice, Tell me now if you can hear me...............

DSJR said:
Restorer John may remember this,
Click to expand...

I refuse to acknowledge your assertion about the 'bad-hair day' (every day) Restorer-John being an old-fart like us.
My understanding (of what "Japanese Watts" stood for) was that they were playing the old "grosser schwantz" game and fudging the means with which they tested for power output @3% THD (<<I think and if I am not mistaken>>: rather than W/[email protected]% THD).
Stop the Hooligan B*st*rds and their Shenanigans!

Not as I understood it (and restorer John, while perhaps not as old as I, knows the 80's and 90's far eastern amps far better than I believe anyone in the UK does now as we saw so few of them due to reasons already given!). I remember Sony ES models gradually thinning out each year and getting ever cheaper as the early 90's progressed. For us independent dealers, the requirement was to sell the entire range and not cherry pick as we could with Denon and even Yamaha for a time. That's why only the big chains often had these brands and even then, maybe not the top models which probably had to be ordered from Germany, the main European centre for such products I recall.

OK, do you remember the thread recently about an inexpensive Denon amp which claimed reasonable power but sounded a bit 'weedy' in practice? I can think of quite a few lower cost amps that could give good power into an 8 ohm resistor but fell down somewhat driving loudspeaker loads which were beginning to dip too much towards 4 ohms even then (late 70's onwards), probably due to marginal power supplies and over-ambitious specs as you mention above. Their top models could do very well for example and the Yamaha receiver shown tested in the proper Io test, was a seriously good 'sounding' receiver in its time and I sold a few of these, as well as the CR800 and fondly remembered if over-the-top CR1000 and the integrated amps related to these. Didn't like the *10 and *20 replacements though for some reason but that could be subjective only vibes here (the flip switches weren't as nice 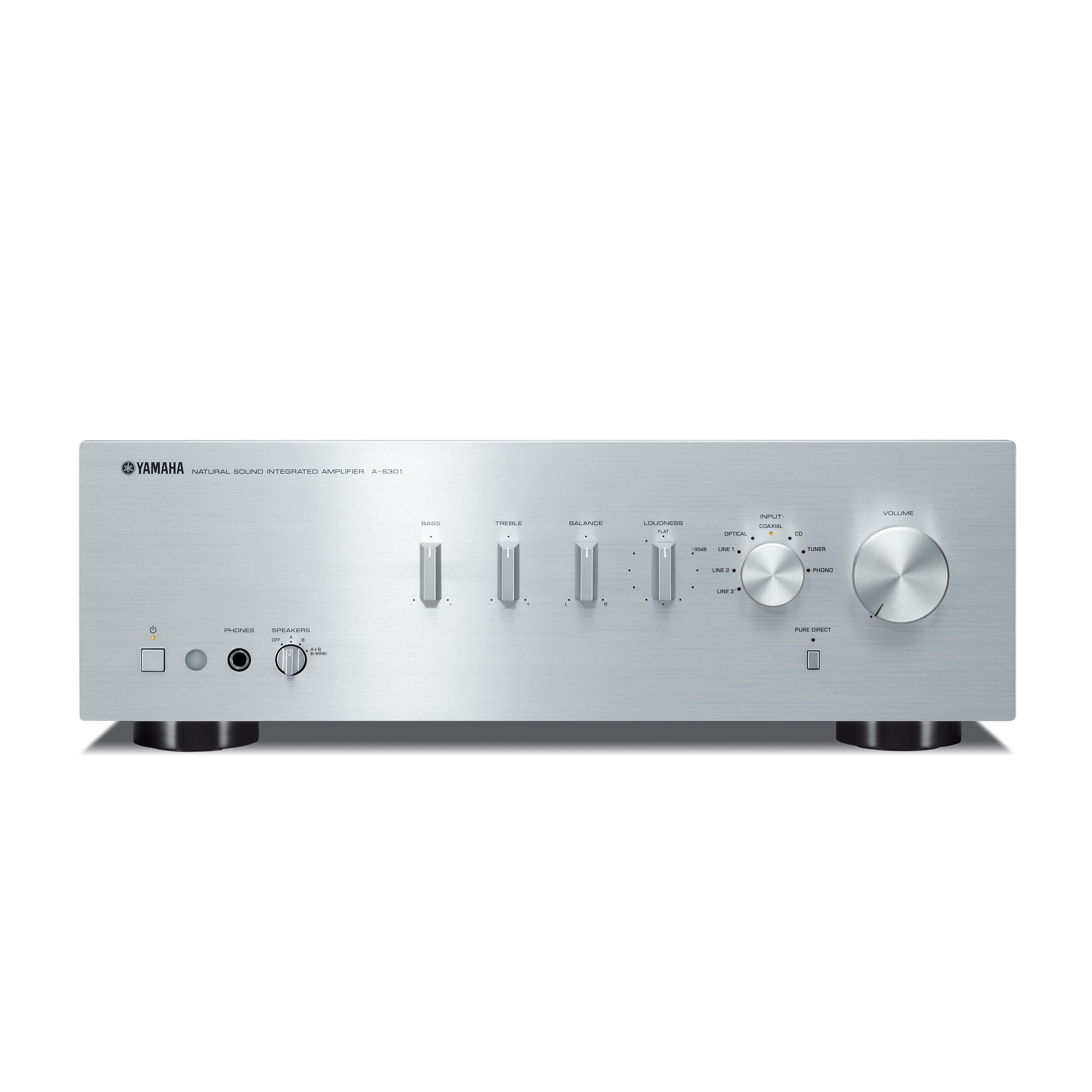 Designed for excellent sound quality, with a beautiful appearance.An integrated amplifier with the advantage of digital input.

I didn't take screenshots but currently, the spec above seems fair and it's a very cheap amp here.

Designed for excellent sound quality, with a beautiful appearance.An integrated amplifier with the advantage of digital input.

These companies all have a "design philosophy". They'd better study electrical engineering.

I have an AS-300 here. Same amp without the inbuilt D/A. A solid performer, with some limitations.
Ricky Roma: I subscribe to the law of contrary public opinion... If everyone thinks one thing, then I say, bet the other way...
B

Any idea what the phono section output is, my present cartridge is 3.6 mV the phono preamp I have on waitlist requires something close to 5 mV. I put $60 down on the open box IO so I'm locked in unless I want to give away $60. Can you tell me if the I/O preamp section gain?
You must log in or register to reply here.