I acquired this interface cheaply and have performed some measurements to evaluate its suitability for measuring amplifier etc. https://www.presonus.com/products/firebox This is an example of a several generations old budget audio interface. 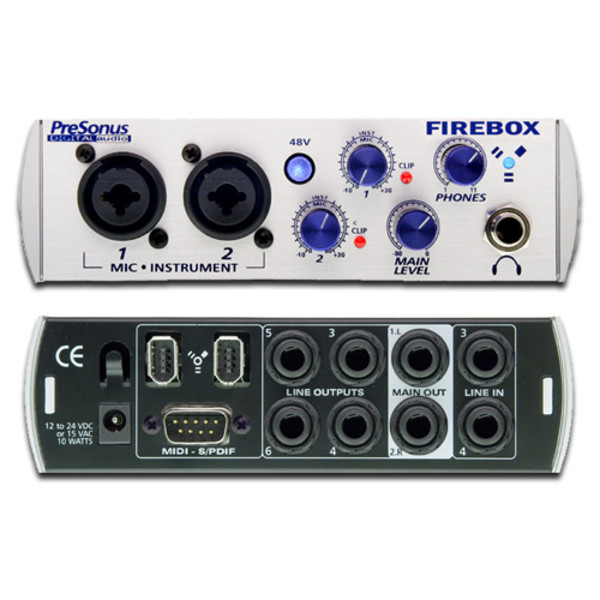 Measurement setup is with a 3 conductor jack lead input 3 and output 1L. It's worth noting that the outputs of the firebox are not diffirential and are instead 'impedance balanced' which means that the -leg is connected to ground via a resistor instead of driven. I normally use the external AC adapter to power the interface as otherwise its flaky to initialize on boot-up without it but in loop-back I can see significant AC harmonics: 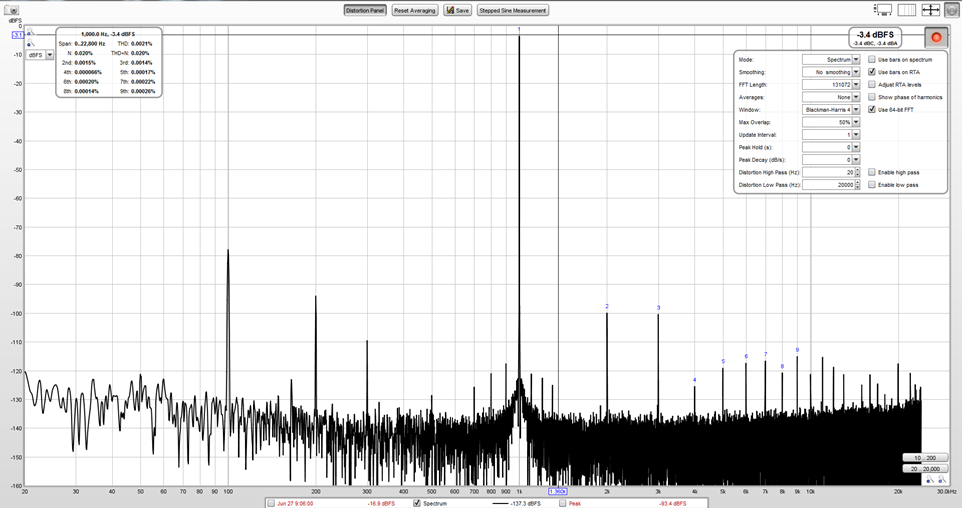 Remaining tests are conducted powered from Firewire only. The optimal level for this interface in loop-back (don't know if ADC or DAC limited) is around 5.7V . Beyond this voltage the performance utterly collapses with harmonic and non harmonic tones across the spectrum. I have conducted further testing at 4V as this is close to optimal and also used in ASR testing. 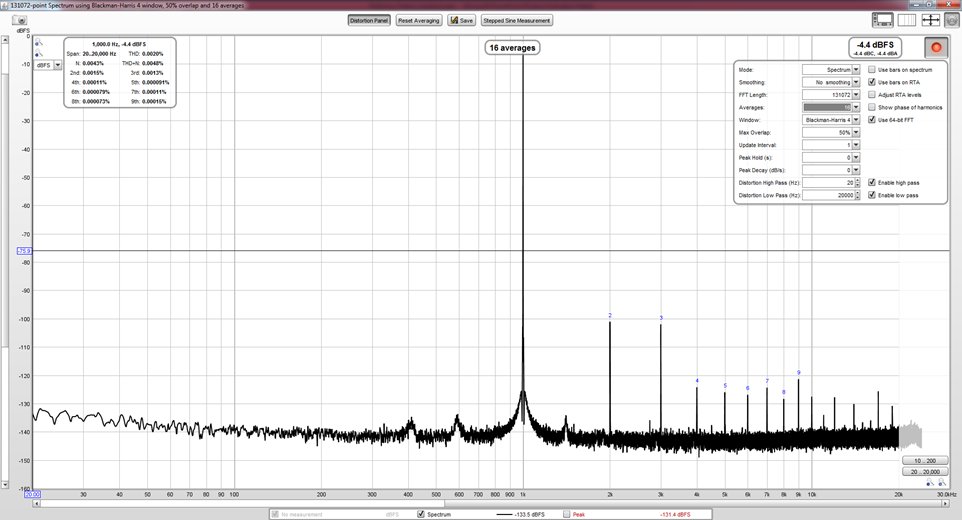 So noise is elevated by using 96kHz sample rate even if low and high pass filtering to 20-20kHZ is used. Further tests done at 48kHz sample rate: 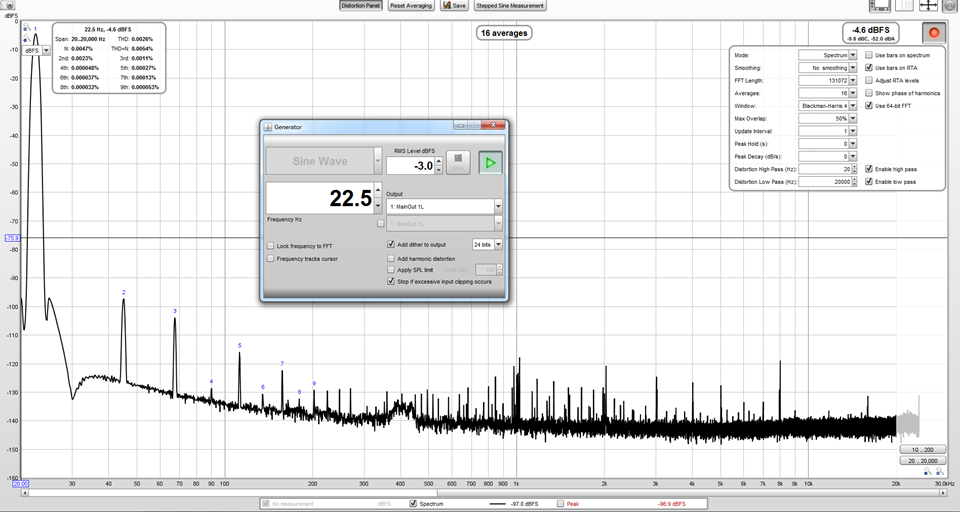 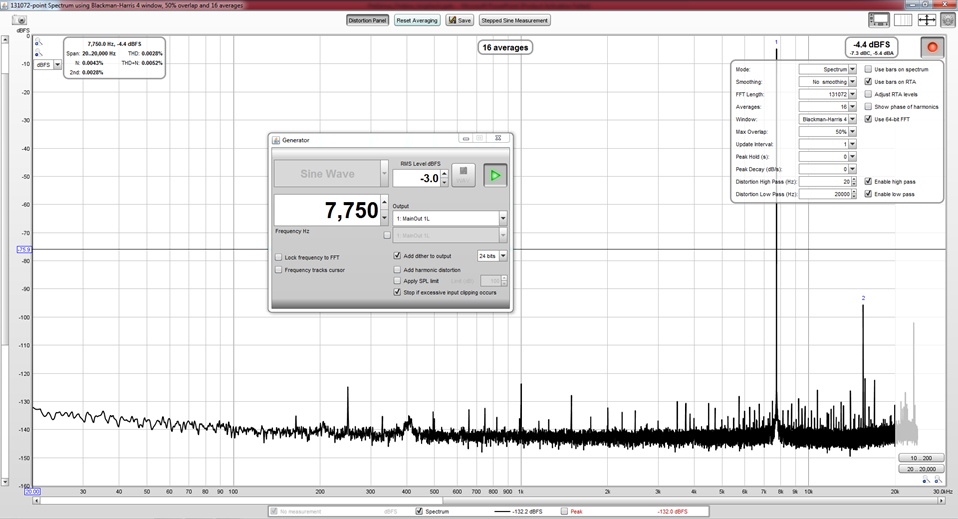 Looking at other loop-back measurements it looks to be possible to get around 94 dB SINAD from modern interfaces in the same price range so this seems OK for something so cheap and old.
OP
K

Here are some RMAA measurements, not sure how to adjust this software and exactly what its doing. 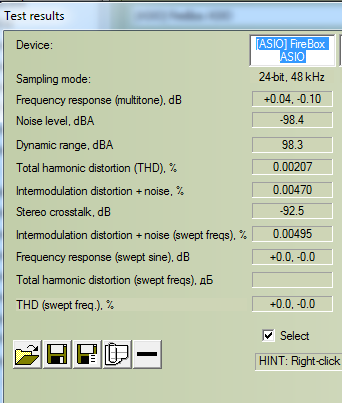 Seems alright for what it is. Frequency generation seems to have a bit of a PSRR problem (and distortion worsening at 96 kHz is clearly pointing towards some issues, possibly correlated jitter which may be a layout or power-related issue), and booting requiring an external PSU may suggest some degraded electrolytics in the power section (I mean, this thing should be from the mid-2000s, when such problems ran rampant, and Presonus isn't exactly the kind of brand to use premium components).

Official specs for the Firebox do not seem to line up with your findings. About 5.7 Vrms is +17.3 dBu - at least 2 dB short of the +20 dBu (@0.5%) max input spec, but at the same time well above the supposed +10 dBu 0dBFS reference level. An identical SNR spec for both mic and line inputs seems suspect, too. Dodgy manufacturer specs aren't all that uncommon.
My audio 'blogalike' | Audio DAC and ADC History | Helpful Audio-Related Calculators
OP
K

The startup issue I think is more of a windows issue as its OK to start if I unplug it and plug it back in once the PC is booted, I have tried different firewire cards with no change. On boot it goes into displaying a red light instead of a blue light and doesn't show in device manager. I have already modified mine a bit to lower the insane headphone amp gain, probably not worth swapping the opamps in something so old though. I was thinking about getting a Motu M4 for measurements or a QA402 but the gains in performance don't seem worth it, I think I would be better off using this and just hiring a AP unit for a week if I need better performance.

Looking at the output on a multimeter I can increase the output voltage a few volts more than the point at which I see clipping so I think its the inputs that are clipping before the output.

kipman725 said:
I was thinking about getting a Motu M4 for measurements or a QA402 but the gains in performance don't seem worth it, I think I would be better off using this and just hiring a AP unit for a week if I need better performance.
Click to expand...

It all depends on what you need it for, I guess. Acoustic measurements or an average hi-fi integrated or power amp (with suitable attenuators) should pose no major issues, and the mic input (assuming the EIN spec is accurate) should provide low enough noise to gauge the output noise of most line outs. Max levels around the +18 dBu mark also betray the unit's original price tag, more the equivalent of an Audient iD14 MkII or iD22 today.

That kind of comparison also shows the kind of progress we've made since 2005... I'd think either of those would show a solid 10-15 dB higher dynamic range in loopback.
My audio 'blogalike' | Audio DAC and ADC History | Helpful Audio-Related Calculators
You must log in or register to reply here.

The Signal Chain: How do noise and distortion propagate through my system?
2