This is a review and measurements of my Openamp phono preamplifier. The project was released in 2012 as an open project.

Openamp is a preamplifer for MM phono cartridge. It uses operational amplifiers, a monolithic buffer and a feedback RIAA correction. DC servo is used to remove DC voltage from the output. Output stage/buffer of the Openamp works at 20mA idle current. It remains in class A for all amplitudes of output voltage for loads 600 ohm and more.
The preamplifier is supplied from 2 x 15V to 2 x 18V regulated power supply.
Gain is 40dB 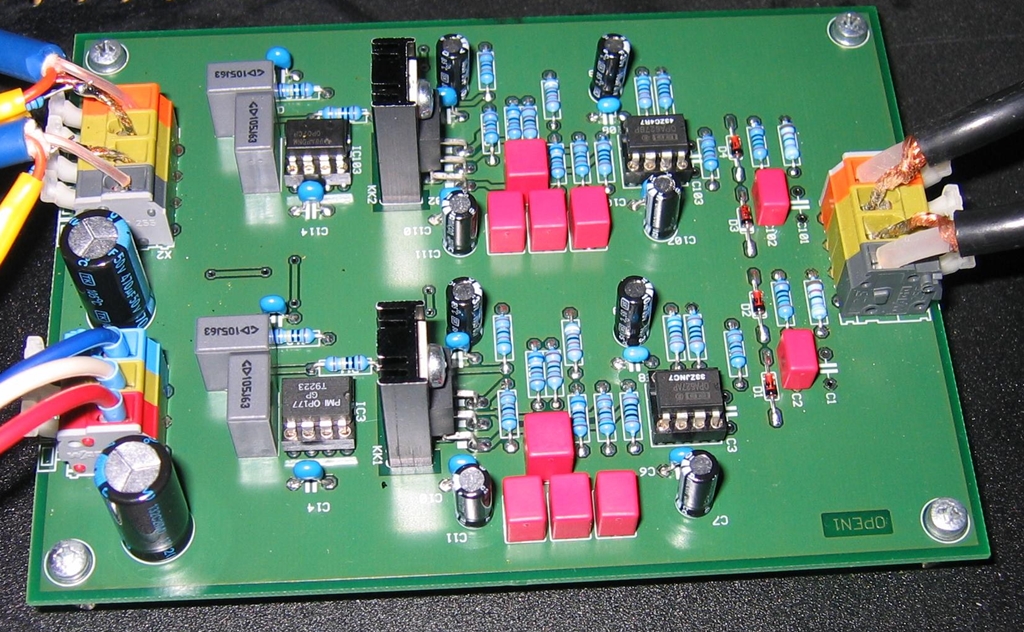 Let's start with the output noise plot, with the input shorted by 50 ohm. Our sample uses OPA134 opamps, which are not the parts with the lowest noise, however the JFET input opamps are better for the MM phono preamp, one of the reasons is the absence of the input bias current flowing through the MM cartridge. 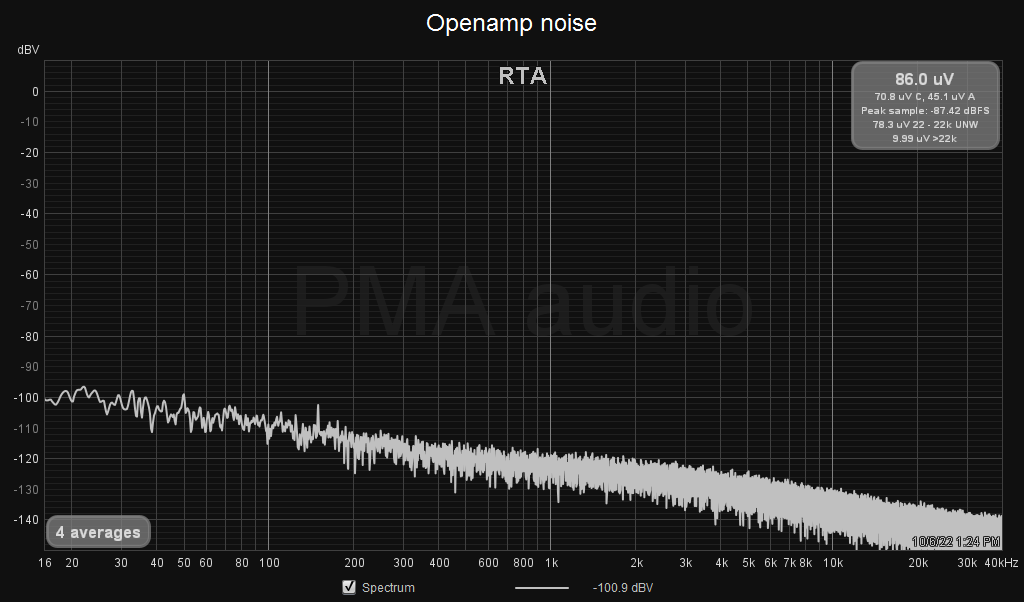 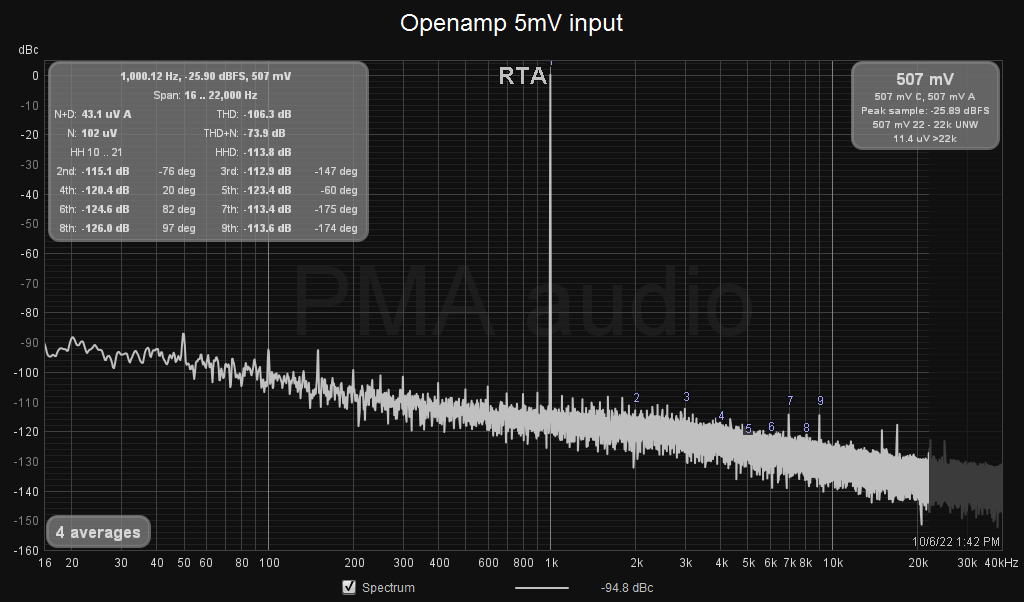 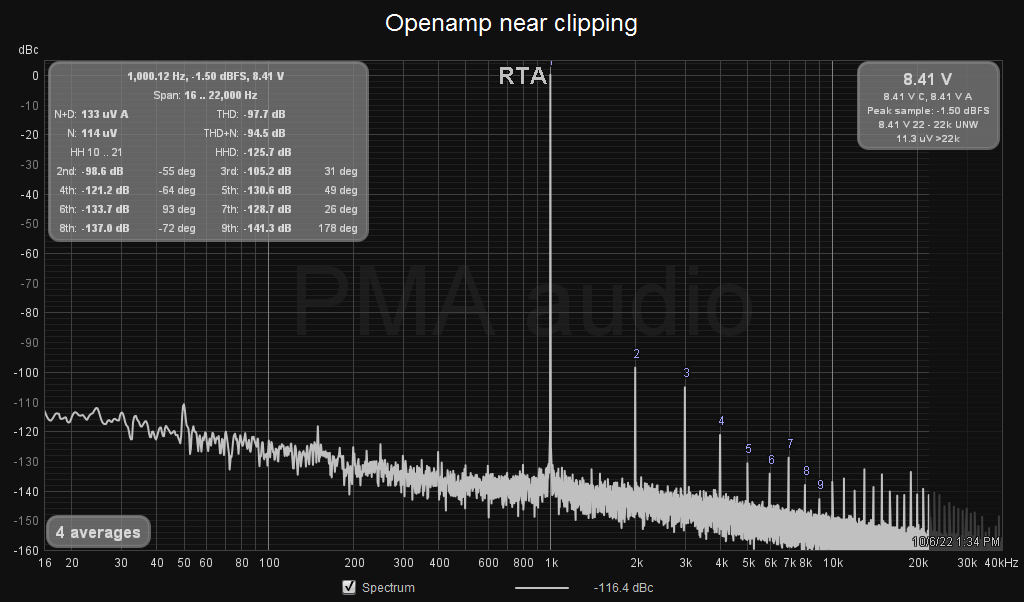 “Most important measurement in a phono stage is frequency response”, as @amirm used to say, so here we go: 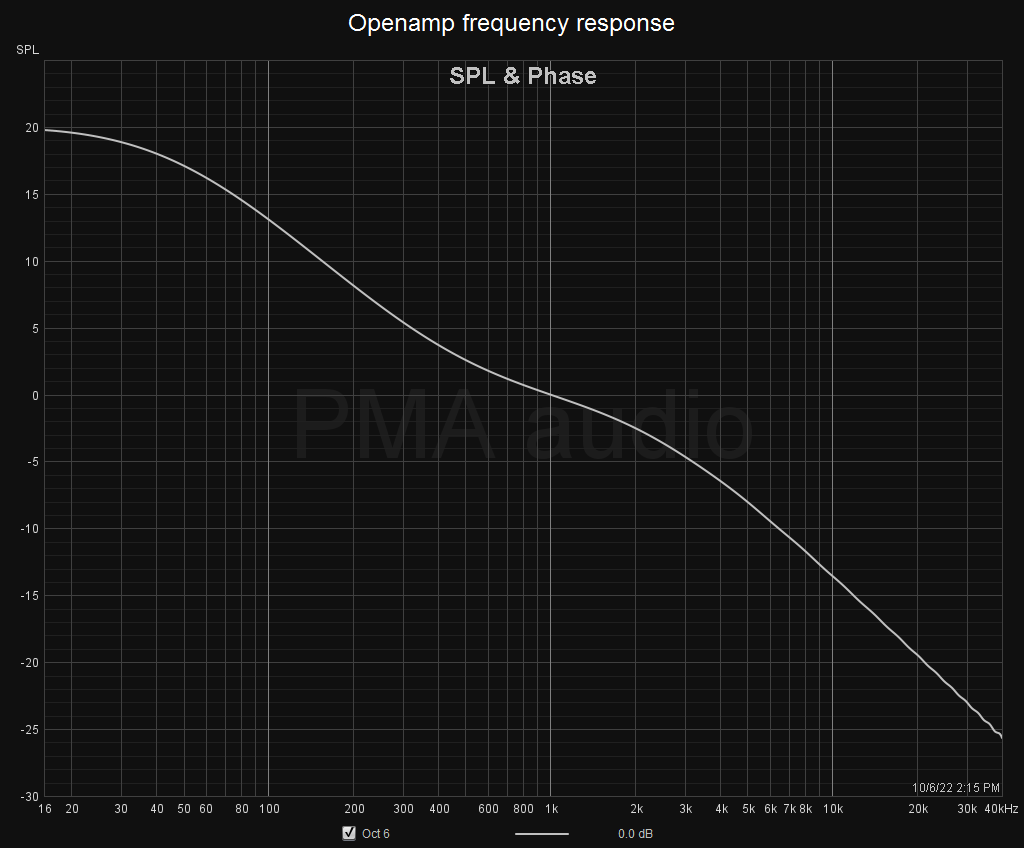 Now the THD and THD+N vs. output voltage plots 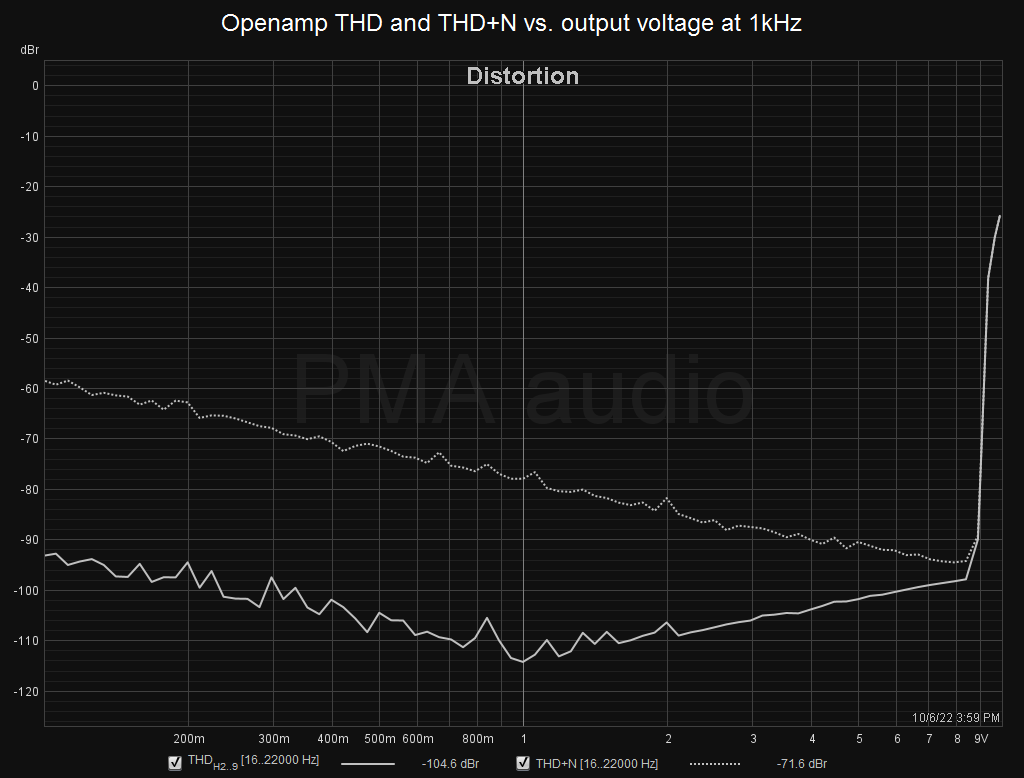 We can see the distortion “knee” at 9V. 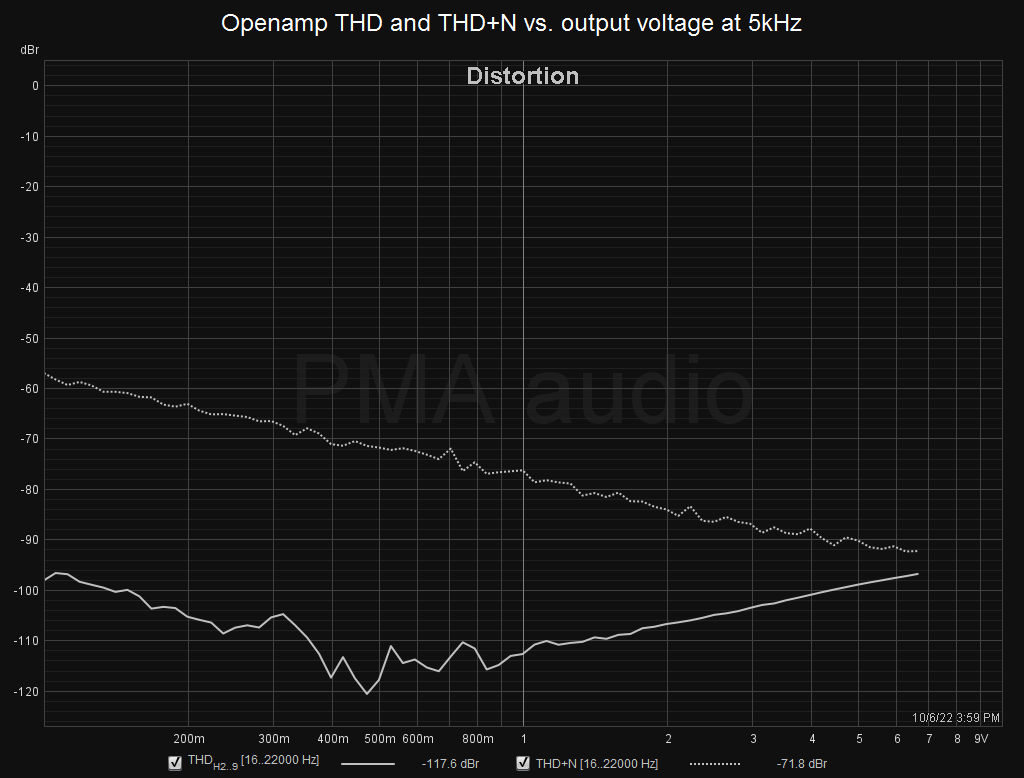 Unfortunately my DAC + output divider does not yield enough noiseless voltage at 5kHz (remember RIAA curve makes lower gain at higher frequencies) and if I omit the output divider, I get too much DAC noise. However, oscilloscope shows there is no problem with clipping level at high frequencies, it remains the same as at 1kHz.

This project was given to the public 10 years ago, together with schematics and Gerber files. I believe it made a very good MM preamp, with very high output drive capability due to output LT1010 buffer used. One may load it with 100 ohm without problem, with high overload margin.
Last edited: Oct 7, 2022
my audiopages
OP 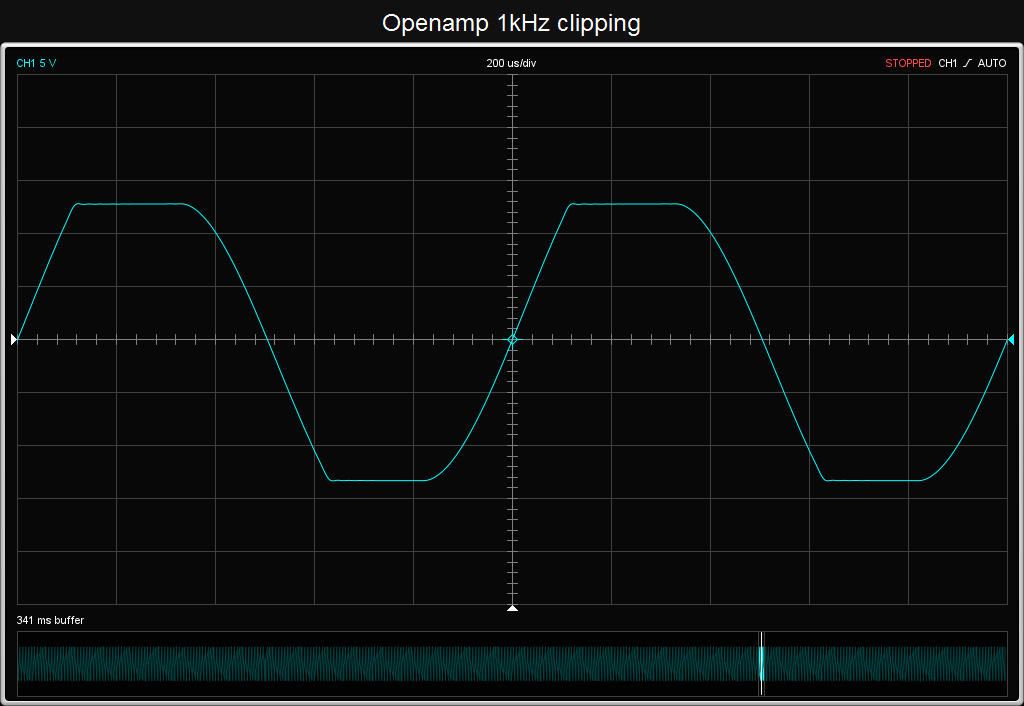 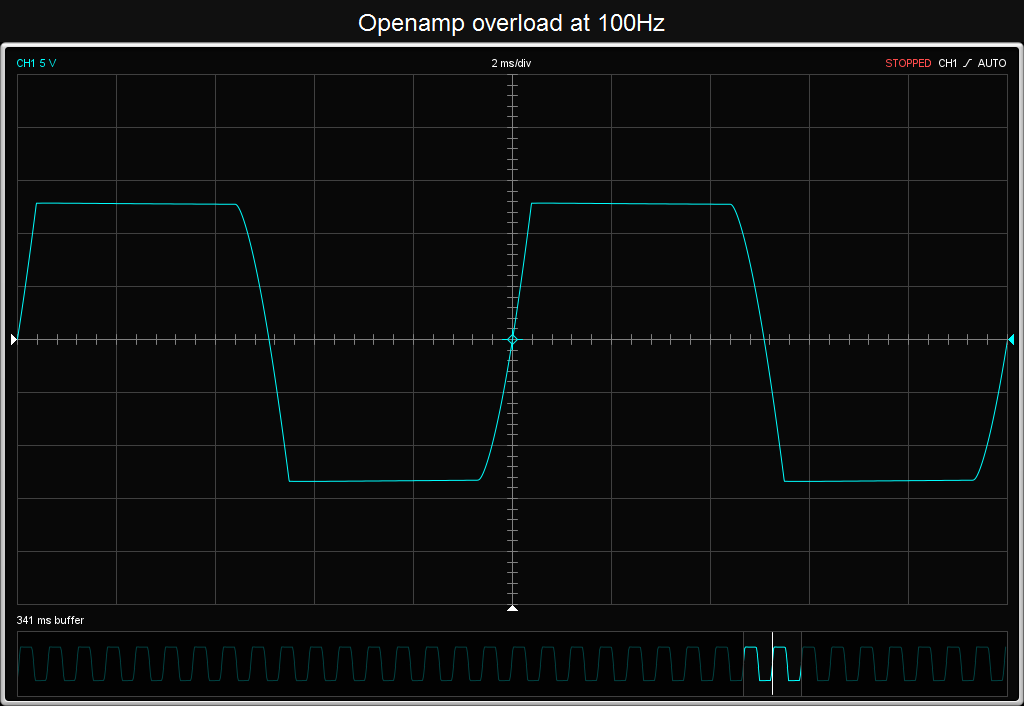 Let me show a less conventional look at distortion plots: 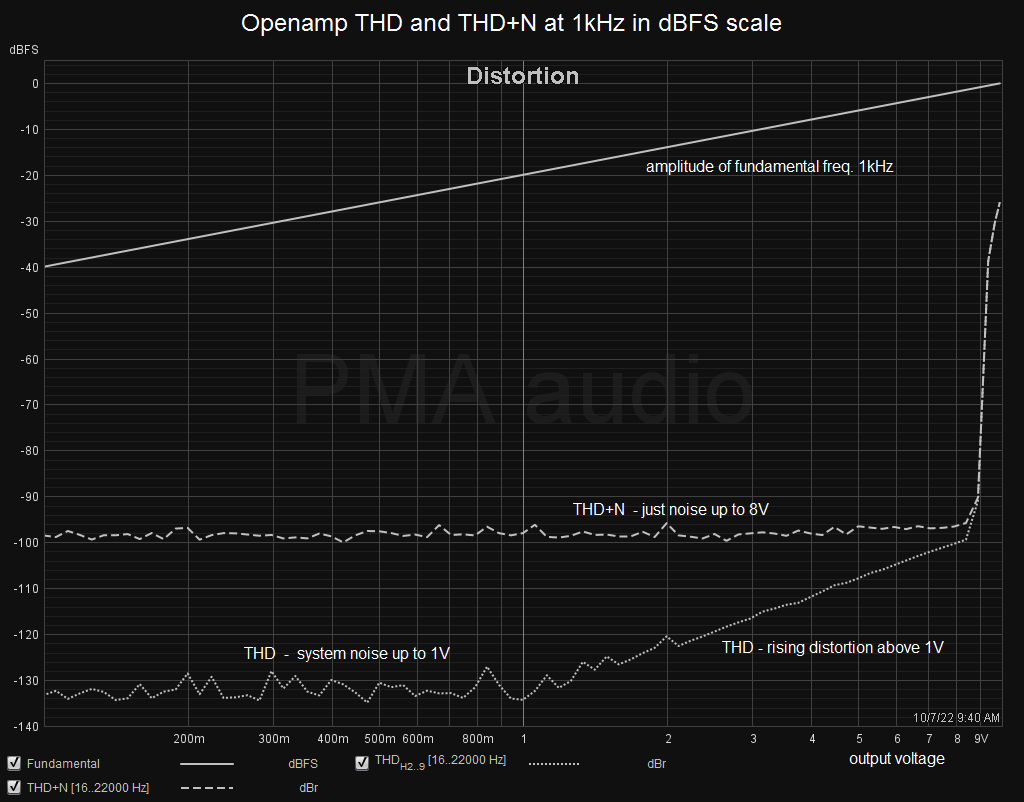 It is the same plot as THD and THD+N vs. voltage plot at 1kHz as shown in post #1, but now in dBFS scale.

The top trace shows rising amplitude of fundamental frequency, we go from -40dBFS to 0dBFS. Below, from top, is a THD+N trace and it reflects just noise, THD+N is here defined just by noise.

Below the THD+N trace is the THD trace. This is distortion only, without preamp noise component. But, we can see the system and FFT "noise floor", which is somewhere at -130dB. So the real distortion can be seen just above 1V and we can see it rises from -130dB at 1V to -100dB at 8V.
my audiopages
OP

20kHz voltage swing. Again, there is no limited swing at this high frequency. Show me the second phono preamp with such behaviour . This sample had 2x17V power supply, thus the 30Vpp swing. With 2x15V supply, the swing is 26Vpp.

Hi PMA,
You may recall I mentioned previously at "the other place" how much I liked my build of your preamp.
It's nice to see impressive measurements supporting the quality I've heard.

mlloyd1
You must log in or register to reply here.

A
Modern AVR Phono Preamp - Reviews and MM only

Dec 1, 2022
apexkingjusto
A
B
Making sense of phono amp measurements