Seems that if you want to create a riot in the streets of ASR, all you have to do is show a non-ruler flat response of Neumann KH80 DSP professional monitor (speaker). Not knowing that, that is precisely what I did in my first review of KH80 DSP: 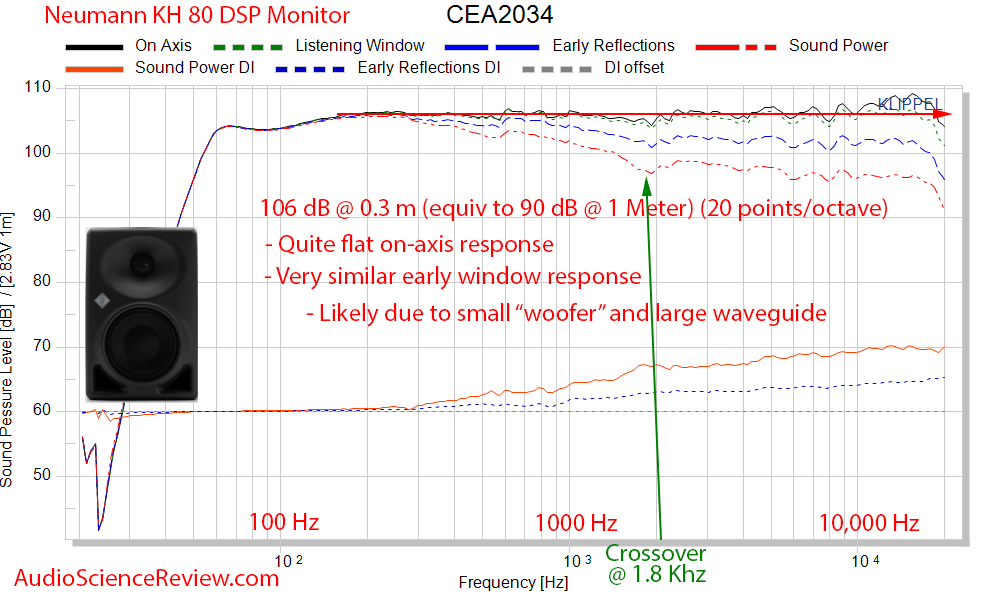 This was one of the earliest speakers I measured with the Klippel Near-field scanner. So naturally (or not), there were a lot of suspicions that it could actually recreate anechoic chamber measurements such as provided by the company: 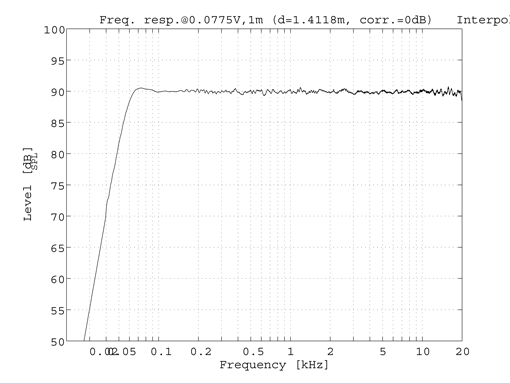 After what seemed like a hundred pages and numerous attacks from every corner on validity of measurements including me not even being dressed right to measure speakers, I decided to test a second KH80 DSP monitor sample that another member was kind enough to offer. Was that the end of it? Of course not. As I said, if the measurements were not ruler flat, folks were not satisfied and this is what we had: 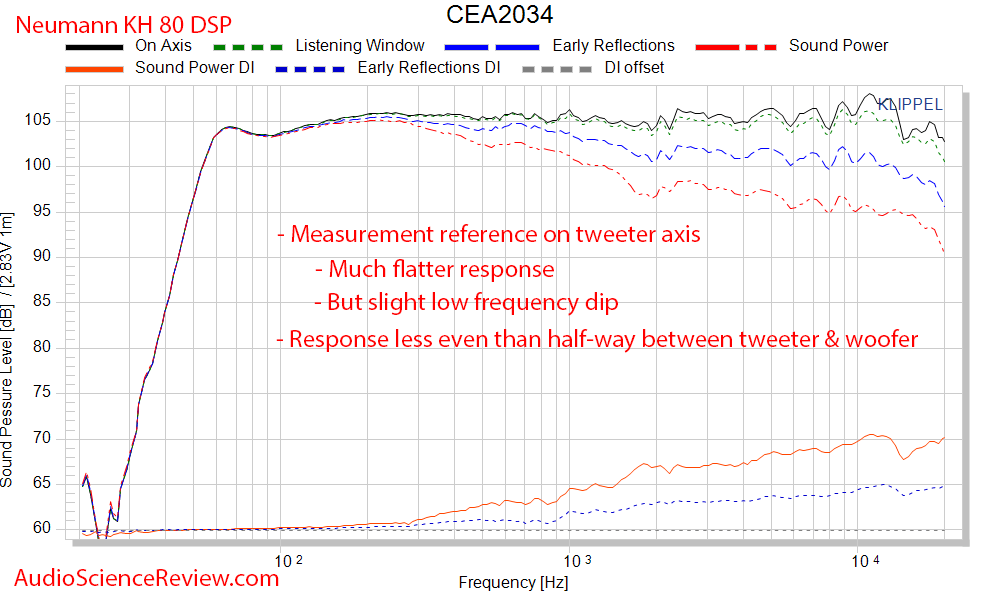 A sin was committed once more with the same dip around 80 Hz or so. Protests ensued and library books burned in streets with assertion that ASR measurements were flat wrong.

After some 25 pages of posts, folks seemed to forget about the fight and thread went dormant. Until... we heard back from Neumann which had asked Klippel Germany to measure an identical sample to what they had measured in anechoic chamber. While there were some differences between the two measurements, they were closer to each other than mine was. So folks went for the jugular this time. Nothing short of repenting on my part and accepting that my measurements were bogus would satisfy. The proof as they said, was right there.

When someone kindly suggested to fund the purchase of a third sample, I decided to not make it the community's problem and purchased that myself. Meanwhile @GuyLayfield reached out privately to me offering that we work together to see what is going on. Suspicion quickly went after the temperature difference for when I tested mine (in winter) and theirs (temperature controlled at 21 degrees C). Guy showed me a couple of useful slides from Klippel indicating changes in speaker parameters based on temperature: 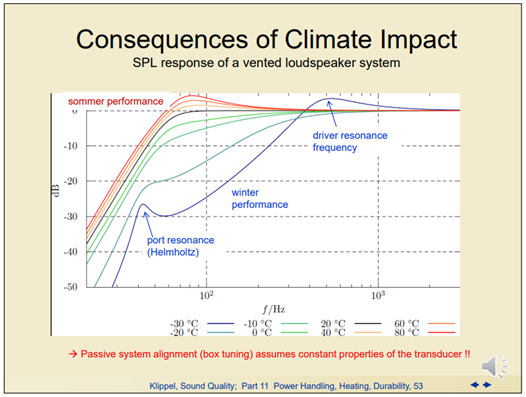 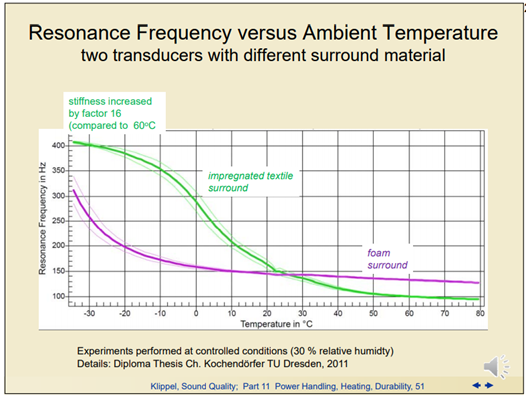 Meanwhile my sample arrived and measured it. And what do you know, the low frequency dip had disappeard: 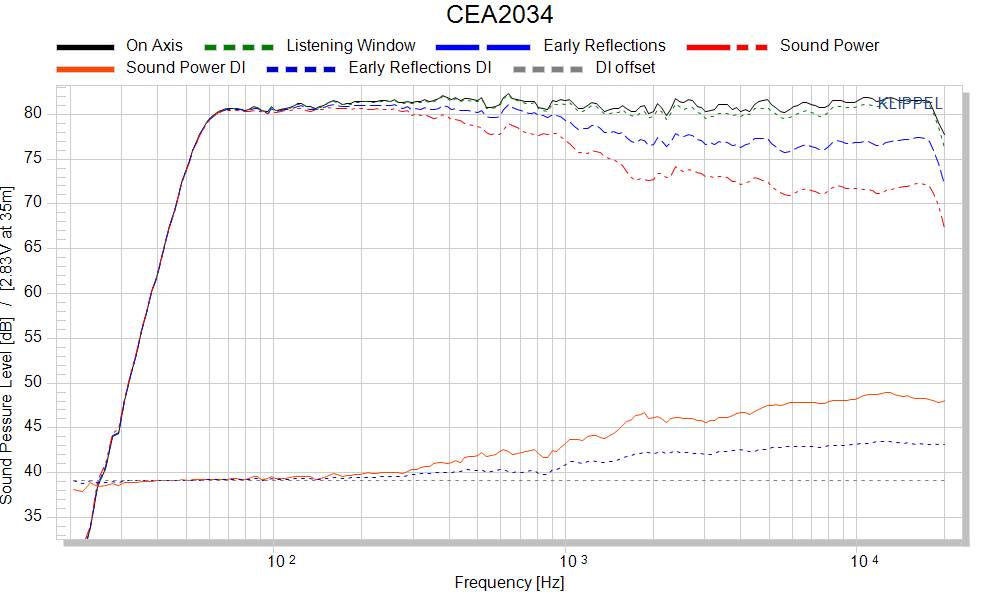 We still had to verify the problem was temperature. So Guy put a unit in the fridge overnight and then made measurements in the morning every 3 minutes as the speaker and its components warmed up. Here are his results, normalized to 21 degree C (black line): 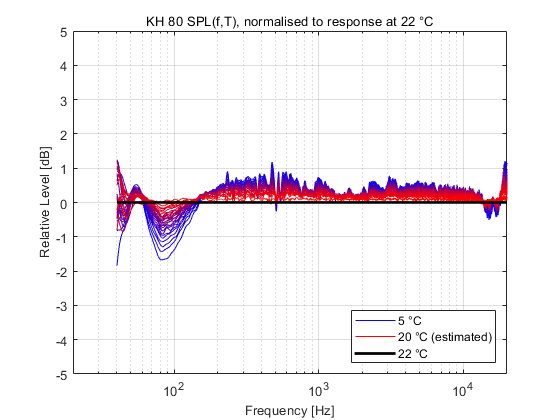 As we see in the bottom blue line, lower temp most definitely created the dip around 80 Hz and gradually disappeared as the speaker warmed up. This then showed that my measurements are indeed accurate but were simply impacted by the lower temperature at the time.

Guy, knowing you all, wanted to still investigate some variations in measurements, some of which were also in Klippel Germany measurements. As it happens, they have measurements for each speaker sold and that included my sample. So we set out to try to reduces differences.

The guilty party here appeared to be the microphone protection cage that I use. This is a sensor shroud around the mic with micrswitches that detect any impact to any object (e.g. speaker) and instantly shuts down the system. It avoids banging an expensive microphone against an expensive speaker! Quite a while ago I had noticed that it was causing some comb filtering due to reflections. I experimented with absorption around it and got it under control. Still, we thought maybe it is at fault.

So I took out the cage and sadly as soon as you do that, all alignment of the system is gone. So while I was at it, I re-adjusted everything better than ever before, and even worked on optimizing the signal processing for least amount of error. Here is that measurement: 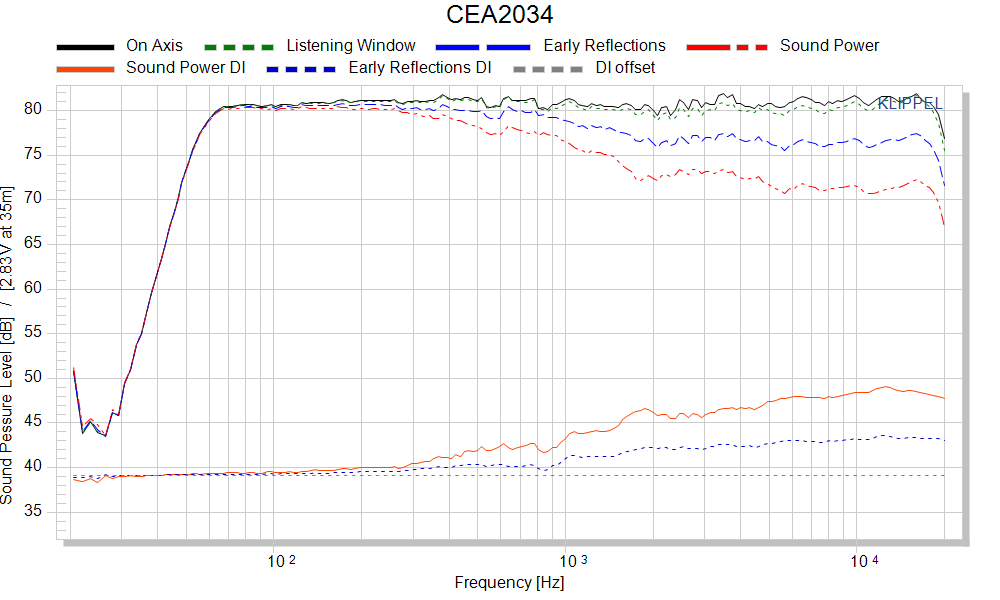 Yes, it looks the same! It is a bit flatter in bass but I think it has tiny variations here and there. According to Guy, we are now with +-0.6 dB from their measurements.

We don't know if the variations are because my measurements are wrong, or theirs. There is no gold reference here.

Frankly, I am sick of it at this point so told Guy that we are done and I should just post the results. People need to remember that every measurement system has variability and there is fair bit of that between anechoic chambers as well. For the purposes of evaluating speakers, what we have is more than good enough and far, far better than anything any reviewer is producing.

Importantly the moment the speaker is put in a room, nothing remotely flat comes out of it. So we need to keep that in perspective.

EDIT: by request, here is the newer beamwidth measurement I have been publishing for other speakers: 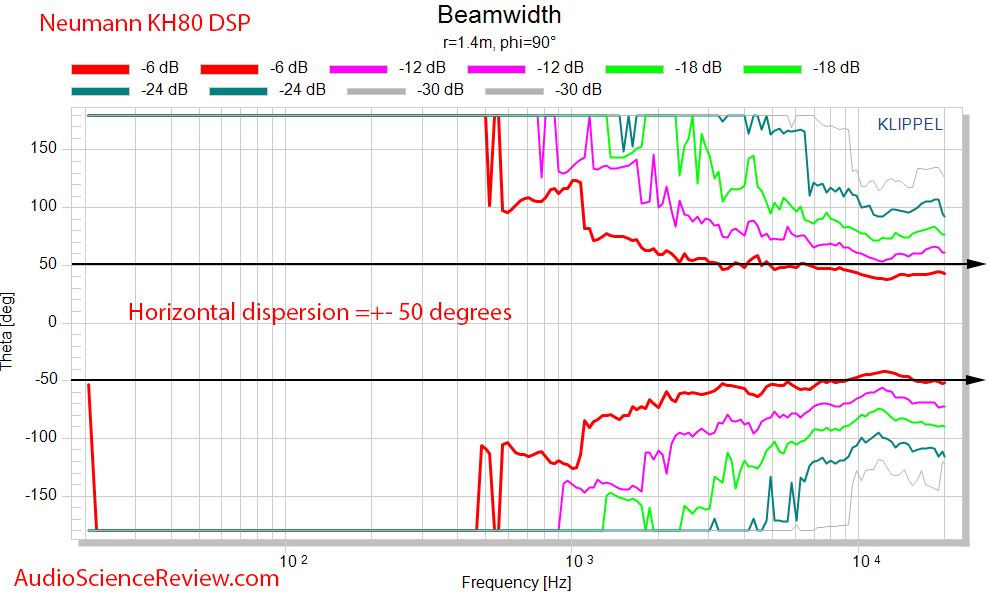 Conclusions
The main variable in our measurements not quite matching Neumann's was temperature. Whether this impacted just this speaker or the others, I don't know. If I get some time (yeh right), I will go back and remeasure a few of the other ones I still have and see what difference there may be. Come this winter, I will heat up the measurement room to get it closer to spring weather at least. Fortunately it never gets that cold here and hopefully we will find that other speakers are not affected as much.

Beside temperature, I have also fine tuned the system, using averaging for example to reduce noise level, deploying more optimal parameters to get the high frequencies right, etc. These have been in place for months so the bulk of what we have measured are accurate as they also enjoy warmer temperatures.

@MZKM has a new score for this speaker which he will post. New spin data is enclosed.

Be on notice that I am not measuring this speaker again so don't even think about asking me to do that. As it is, I have to now rip the system apart again and put the cage back on it and re-align it all.

As you can tell I am quite grumpy because of this ordeal. Fortunately it is not something where a few hundred dollars won't fix. So please donate what you can using: https://www.audiosciencereview.com/forum/index.php?threads/how-to-support-audio-science-review.8150/

amirm said:
We still had to verify the problem was temperature. So Guy put a unit in the fridge overnight and then made measurements in the morning every 3 minutes as the speaker and its components warmed up. Here are his results, normalized to 21 degree C (black line):
Click to expand...

It’s time for everyone to donate, because Guy had to put the speakers into a refrigerator to mimic @amirm ’s home temperature.
Why is there NO perfect equipment, only compromises?
M 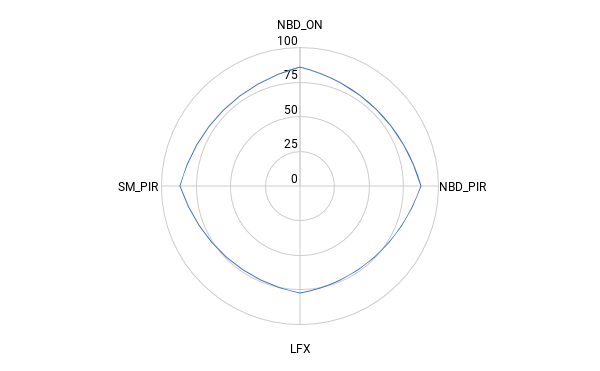 Donation sent. You can buy this Lasko from Kohl’s online now.

Why is there NO perfect equipment, only compromises?

I really appreciate the time and effort you've put into getting this right. All the more given that the differences were relatively small to begin with.
M

What I find interesting is the difference in vertical dispersion in the crossover region.

___________
Neumann gives some tight constraint specs for frequency response, so let's look at that:
Spec on left, measured on right

Neumann also has claims on production consistency, but since we have different levels of accuracy with the past samples, I did not see how well they matched.

MZKM said:
What I find interesting is the difference in vertical dispersion in the crossover region.

Ah forgot to mention that the final measurements are for reference axis and not tweeter. This makes some difference here because speaker is so small.
Amir
Founder, Audio Science Review
Founder, Madrona Digital
Contributing Editor, Widescreen Review Magazine
Click for My Technical Background
My YouTube Channel
C

amirm said:
Ah forgot to mention that the final measurements are for reference axis and not tweeter. This makes some difference here because speaker is so small.
Click to expand...

Yes, but odd how the Sample #1 measurement (tweeter axis) had the least dip in the crossover region. So, if they didn't optimize the crossover for mid-axis, why not just flatten the treble a bit more and have tweeter-axis be reference?
Loudspeaker Data & Preference Ratings

Great work as well going back and triple checking things!!

I wonder if the temperature effect is on the speaker parts themselves or some effect on the internal amplification/circuits as we've seen that affect some components.
OP

SimpleTheater said:
Donation sent. You can buy this Lasko from Kohl’s online now.

Thank you so much. In hindsight, I should have asked for a few thousand dollars!
Amir
Founder, Audio Science Review
Founder, Madrona Digital
Contributing Editor, Widescreen Review Magazine
Click for My Technical Background
My YouTube Channel
OP

SimpleTheater said:
It’s time for everyone to donate, because Guy had to put the speakers into a refrigerator to mimic @amirm ’s home temperature.
Click to expand...

I'm confused. Are we sending the donations to Guy since he put the speaker in the fridge and tested multiple times in order to arrive at the measurement Amir got?
https://www.erinsaudiocorner.com/

amirm said:
I am not measuring this speaker again so don't even think about asking me to do that.
Click to expand...

@amirm, would you mind testing the Neumann KH80 again? Just thought it might be worthwhile.

is it wrong that i Find this incredibly funny. People went Through a lot of effort for a few db on one frequnecy, doubt the difference is even audible! This is science

You could put one speaker on ice while testing the other... the possibilities are endless!
Looking back at life, I feel I must award myself the Headless Panther.

I keep my HT room at 73 degrees Fahrenheit. Could you please retest this speaker and every other speaker at this temperature? Thanks in advance!
You must log in or register to reply here.

Thursday at 2:31 AM
Helicopter