Hi everyone.
Recently, I have been doing a composite amplifier with tpa6120a2. It's a great chip and i have had pretty good result so far.
However these is something I can't explain so far.

I have had a chance to measure the distortion of the original jds el amp and did modification with opa2211/opa1612 and had higher distortion with low impedance load at high frequency 5-10khz.
As we all know opa2211 has by far the best spec (not sure about ad797 but still).

Here is the problem. I used opa1612 to control the tpa6120 and had higher distortion at high frequency as well. When recently opa2156 came out, I tried them in the same circuit, the thd is impressive at 0.00009% at 6500hz. That is better than opa1612 as what I remembered. But two days ago I had some sort of discussion in another thread about cmrr etc. That got me thinking, opa1612 has super high CMRR across the frequency range up to about 100khz and very high open loop gain at 10khz. Why it made the measurements worse than with opa2156?

Things probably matters but I don't have connections yet:
input impedance
low input/ source impedance of my circuit
470ohm Rf in the nested feedback network

Another side information: yesterday I measured jds atom which has njm2068 wrapping around lme49600 instead of lme49720. The performance under load is pretty much the same as opa2156 and is better than what I measured from el amp. Njm2068 doesn't have jfet input nor have super high loop gain or anything.
Summing of information:
njm2068 and opa2156 lower distortion
lme49720 and opa1612/opa2211 higher distortion

Please, someone give me some insights, thanks in advance.

Opa2156 & njm2068 has CMOS input and opa1611 & lme49720 has bipolar input. Bipolar topology typically has better performance but there is a limitation in common-mode voltage input. This can cause distortion in certain circumstance.
This is one of the reason Nwavguy prefered njm2068 on his O2 amp design.
Recently, QuantAsylum compared opa1612 and opa2156. link

I would guess JFET, not CMOS, input stage. JFETs are subsurface devices with low noise; CMOS tends to have higher noise as well as some other issues for audio circuits.

I don't have any real insights (have not thought about it, would need time to analyze) but I suspect CMRR is not the primary factor at play but some other details of the opamp designs. At such low distortion levels it can be hard to find root cause.
Don
"After silence, that which best expresses the inexpressible, is music" - Aldous Huxley

OPA1612/2211 has excellent CMRR but PSRR isn't stellar and strictly follows OLG. And bias current vs common-mode voltage has a slope that adds distortion (H2) when source impedance isn't super low and well balanced while OPA2156 doesn't have that problem (but may have nonlinear capacitance vs CM voltage unless the input stage is bootstrapped like in OPA1642). Maybe those are the factors that make the 1612 worse than 1656 in your application. 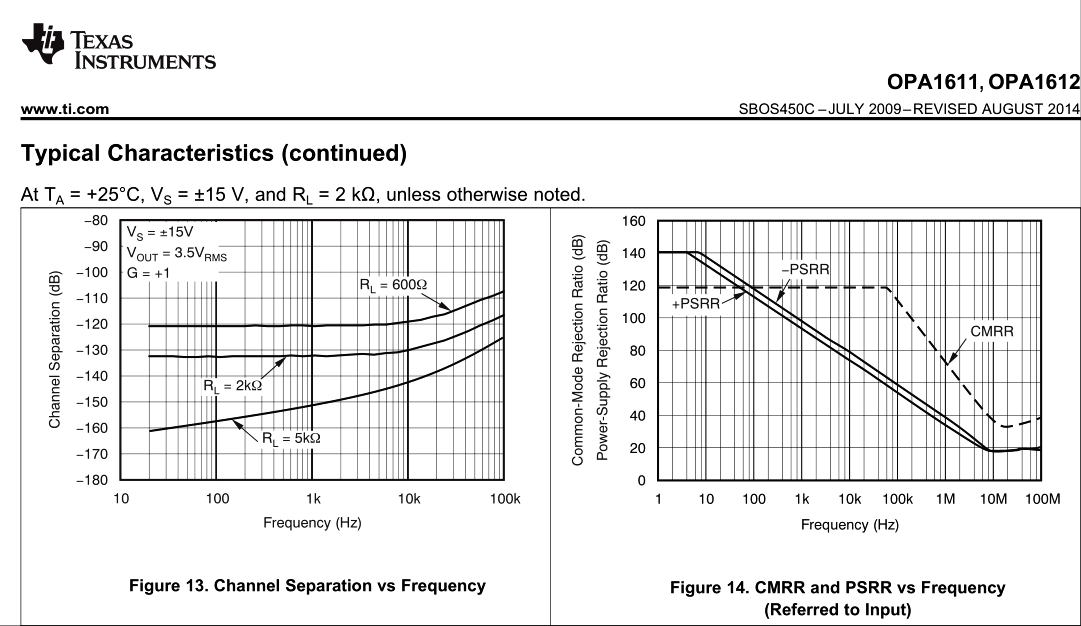 DonH56 said:
I would guess JFET, not CMOS, input stage. JFETs are subsurface devices with low noise; CMOS tends to have higher noise as well as some other issues for audio circuits.
Click to expand...
The OPA2156 is CMOS according to TI's datasheet, with no mention of JFETs. Its unusually good performance for a CMOS opamp was why QuantAsylum thought it worthy of a blog post.

somebodyelse said:
The OPA2156 is CMOS according to TI's datasheet, with no mention of JFETs. Its unusually good performance for a CMOS opamp was why QuantAsylum thought it worthy of a blog post.
Click to expand...
Yah, I saw that in the header, but couldn't find any detail about the input stages, or much of anything else after a quick skim. It may be a CMOS op-amp with JFET input, or chopper-stabilized, or just really big and very low-noise input FETs. I should ping one of my friends over there, or maybe somebody here knows someone. Really good performance regardless.
Don
"After silence, that which best expresses the inexpressible, is music" - Aldous Huxley

It's CMOS according to a TI guy:
https://www.diyaudio.com/forums/ven...erformance-cmos-audio-op-amp.html#post5732359
It's made from the same process than OPA1652 and 1678 and for those we find CMOS input diff symbols in their spec sheets so extrapolation for the 1656 should be correct.
You must log in or register to reply here.
Share: Facebook Google+ Reddit Pinterest Tumblr WhatsApp Email Link