My time with the Aune S7 Pro

I am by no means an expert, I'm just a music lover like you. I have about 20 years experience playing guitar and spent my early 20s working live concerts and Guitar Center during the day. I love the sound of a guitar amp, specifically a live guitar amp over driven pushing a cabinet of speakers. That sound and acoustic experience is my passion. I'm fascinated by the idea of tiny driver in a headphone attempting to replicate that phenomenon. I have never really heard it. Some can recreate the sound but the acoustics and the behavior are always wrong. I have heard some come close. So this is my journey to try and find the real thing. 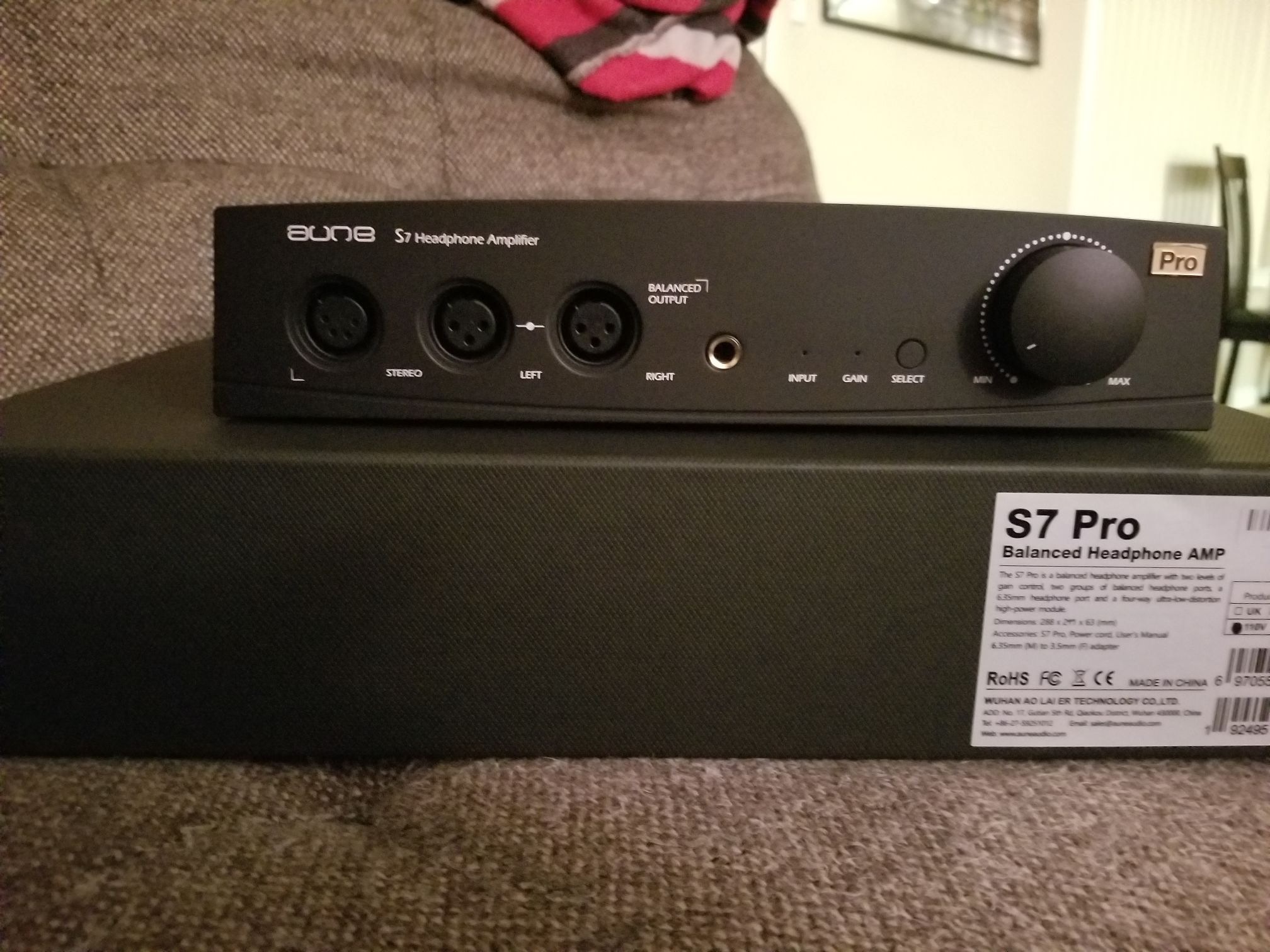 This was a real treat. I had been wanting to upgrade my desk amp. I had been using a Darkvoice, but I bought a set of HE4XX. The planar driver definitely doesn't like a tube so I started researching. So I began reaching out to Zeos from Z reviews. I was focused on finding an ultra clean desk amp that can power everything and had balanced connections. Also I didn't want to include a dac. I wanted to cut cost. I figured an amp only unit would be more focused from an engineering perspective and yield a better product. The options discussed where the Audo GD 1-Amp, and NFB. The Schiit Jot, Mjolnir, and Asgard. Monoprice Amps and Massdrops various amps(2 weeks before Z heard the 789) etc. His patreon chat and his direct advice led me to the Aune S7. So I emailed Aune. 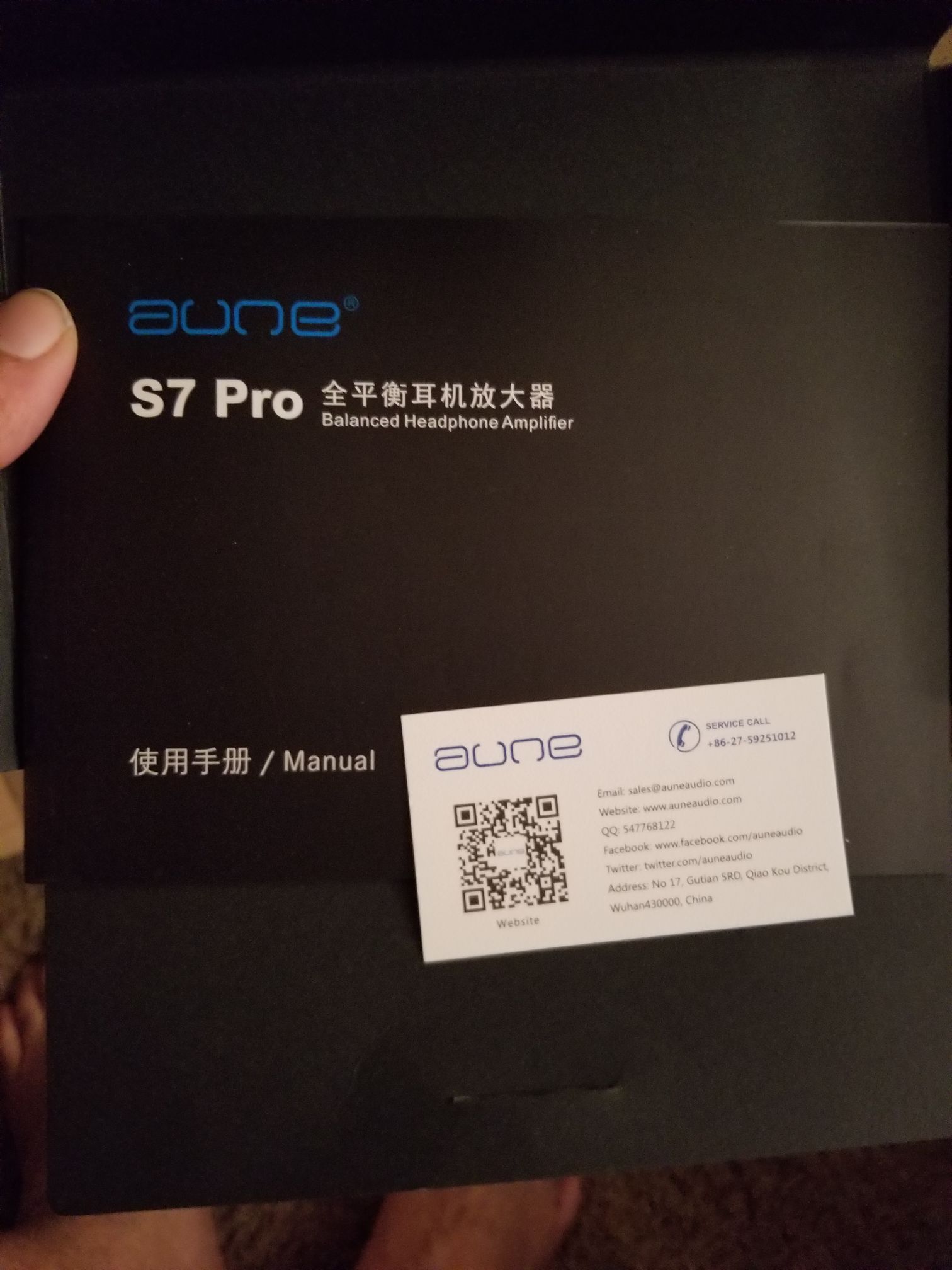 This was the best part. Candy Mei from Aune is amazing to work with. Unbelievable fast response, gave me a great deal. She even covered shipping for free! I have to say, this was my by far my favorite customer service experience all year! I cant say enuff, Thank you Candy!

Apparently the S7 had concluded production. It was being sold in the US via Massdrop. Massdrop was now only selling the S6 dac/amp. Candy let me know they had a new model called the S7 Pro. I conversed with Zeos, He and I both wanted to know how it compared to the old S7. So I pulled the trigger on an Unknown Model. Dont try that home kids! 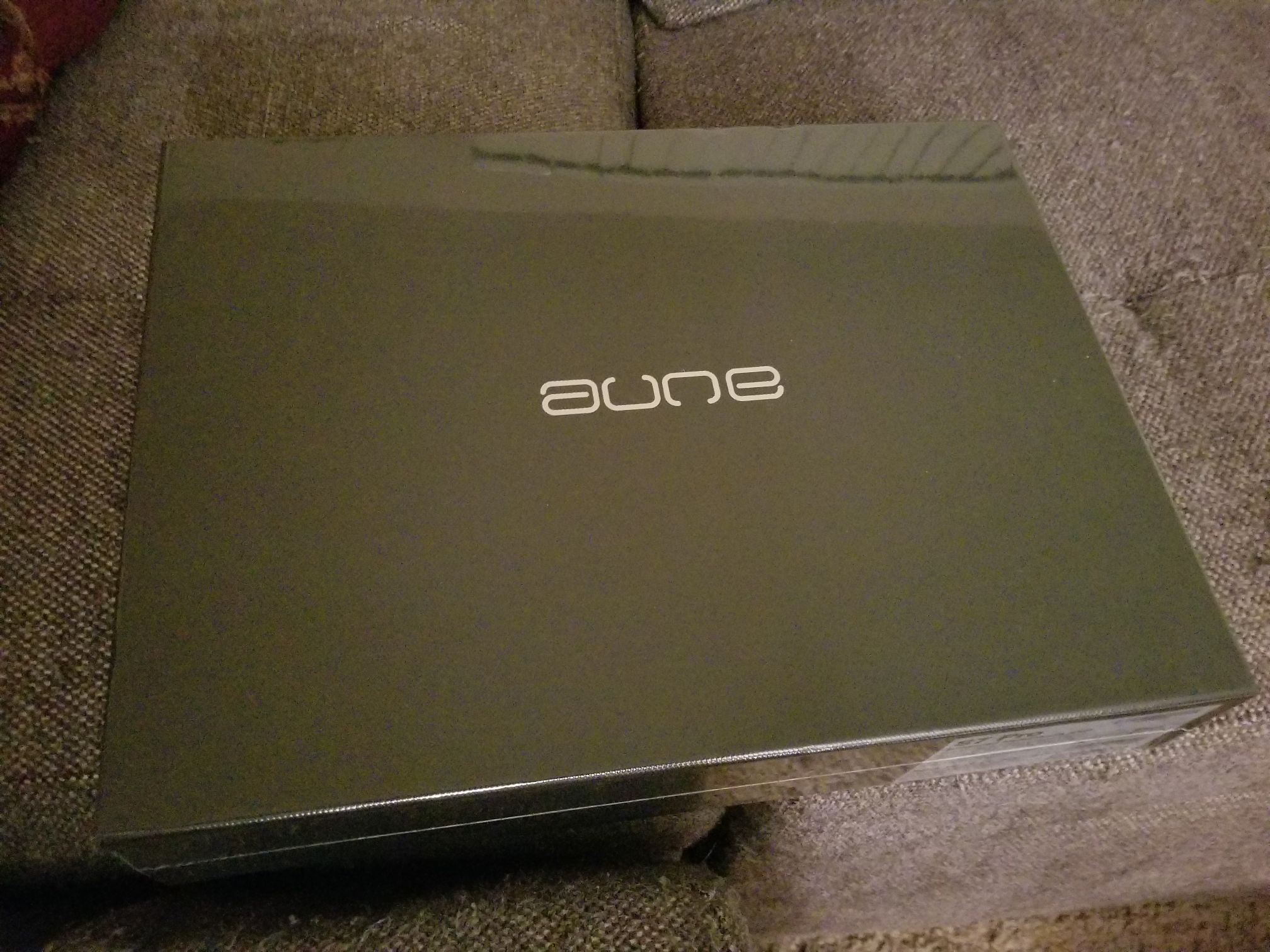 1 Week later, it was on my desk. I have never heard the Original S7. If it was anything like this I would have been impressed! This thing is powerful! 4.5w with the balanced connections! It floored me. Also, this is by far the cleanest sounding audio device I have ever heard. This thing was impossible to detect. I had never heard music uncolored like that. I used my 660s for there detail, and couldn't detect anything. It was the first time I ever thought I could here a difference in dacs(Mimby vs SU8 single ended). I had fallen in love! I also had taken pride in doing my research and owning the best amp Zeos had heard. Then Z heard the 789...

So I followed through with my talks with Zeos and sent him the S7 Pro. He still has the Original S7 and did a side by side listen.

Short Summary, it's an amazing amp but there's no difference. 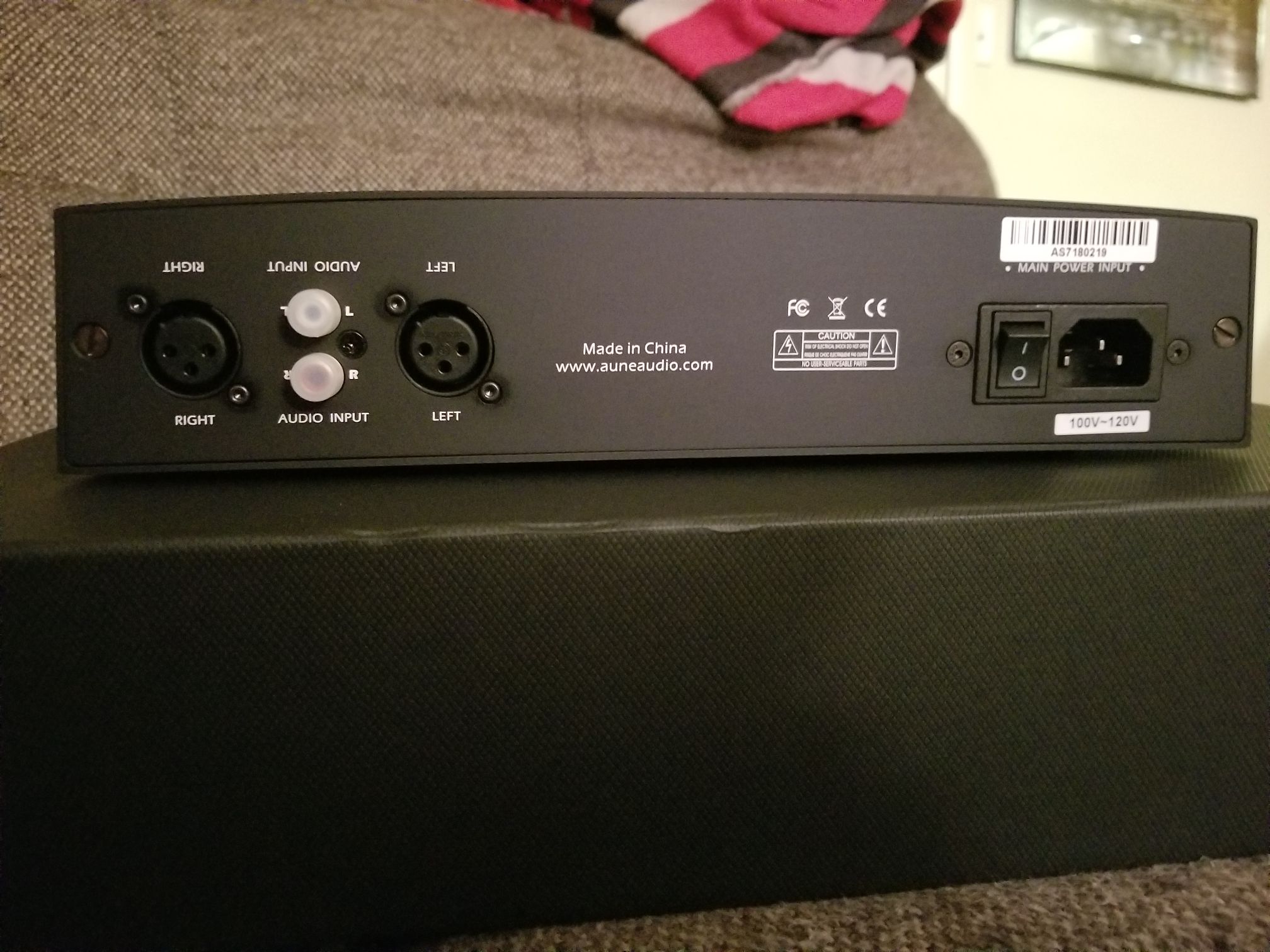 I love the Aune S7 Pro so much! It's an amazing amp that I can not recommended more! The sound is unbelievably transparent and there is so much power! I have sold it in favor of trying out the 789. If the 789 is even 80% what this amp was, I'll be happy.

Zeos posted the review of my amp, so I wanted to post the video.


I also wanted to comment on the 789 vs the S7 pro, I love both. Besides all the hype, the 789 truly is nothingness on a wire. It's single ended power has no comprises, unlike the S7. I definitely learned something about headphone amps, there is a difference, just like Amp heads. I cant really describe it, but the clean sound of the 789 is a different clean sound then the S7.

The 789s nothing sounds more nothing, if that makes any since at all...if there isnt anything playing you cant tell if the 789 is on. Literally, if the light was broken you couldn't tell. The amp is cold until it's been on for like 3 hours, then its luke warm at best. The S7 was the same way temp wise, but the sound was a bit warmer. It was more "musical" I guess...The 789 is very "analytical", there seems to be zero color(listening with 660s). I actually miss the more musical sound. Both have no noise at all, the 789 has like -2 noise, but both are punch, big, and great sounding Amplifiers.

On that, I have learned alot about headphones and hifi audio. "Clean" does not = Great. "Clean" = revealing. Listening to the 660s through a 789/SU8 I have been using, I feel as if I get 100% what I am meant to hear. The sound is dry, crisp, super detailed and tight. It amazing for well recorded, not heavily distorted stuff. I borrowed a friends 990s and felt like a moron...I way prefer the v shaped sound. Apparently I am not an audiophile, but that's cool. That super dry clean sound kills most metal, electronic stuff.I liked the colored punched up sound of the Beyerdynamic more. I guess it's just more inline with my taste. Last week I got a set if T50rp Mk3s from Amazon and liked them more then the 660s as well for that stuff.The 789 really shines with them just due to detail and intense punch it brings. All headphones sound even better on a more musically friendly amp like my Darkvoice, but alas the tube as well is no good for bass heavy music.

So I am on a quest for a solid state with clarity, detail, and punch of the 789, but a warmer more friendly sound like S7. It most have better SE performance maybe Gustard H20(Fing [email protected]!!!) ? Mjolnir? Benchmark? God I hope Topping or SMSL does some endgame amplifier to challenge the 789...

So after along pointless ramble in the dark. My conclusion. Different amp technology seem to have a noticeable tone impact. I knew this was the case with guitar amps it seems to be exasperated due to low power. After all this...I listen to my Darkvoice alot more. Reason, I'm in a big Tom waits,Leonard Cohen, Nick Cave and Highway men phase. Tubes make a much larger difference. In short, with tubes the nothingness sound now has a sweet light static huming. In trade you get alot more body to the music with a light bass roll off. It's great for anything more atmospheric or bright. If I want to listen to other people's sound clip though... or when I go back to Metal \m/, game, or want to blast my skull with Electronic music the 789 is waiting . To the the S7 credit I will be repurchasing as my 6 pin amp choice in the future, if it goes back on massdrop like the old S7. To anyone considering the S7 or the S7 pro, it's balanced performance is as good as the 789 but the single ended kills it for me. I would consider the 789 IF your goal is super duper clean, 0 color, gain on wire sound. If your a fan of amps and the sound of analog doing analog, or like a bit more body to your music( and don't mind being forced to use 4 or 6 pin cables) the Aune is my pick. Also, go get a Darkvoice and listen to Rain Dogs...your welcome.
Last edited: Feb 2, 2019
HD660s,6XX,4XX,PortaPro Black Edition
Modi Multi, SU8
Aune S7 Pro, DarkVoice 336se
B

Try to Schiit Magni 3, it's B-stock is cheap.
F

Anybody have any idea what the output impedance on the XLR4 is? Not listed in their specs.
A

I recently bought this amp. I already had THX 789. I have stopped using it after listening to S7 pro. It is an absolutely awesome amp. Would really love to see @amirm do full review of this. Currently pairing it with SMSL M500 as my endgame setup.
@amirm, I am open to loaning my unit for your review. Let me know if you would be interested!

Regarding Z reviews, they are more of an entertainment than real review. He says great things about THX 789 as well as Audio-GD R2R. That makes his remarks essentially meaningless .
Last edited: Jan 11, 2020
You must log in or register to reply here.
Share: Facebook Google+ Reddit Pinterest Tumblr WhatsApp Email Link