GoldenOne said:
Page 1 of stereophile this month.
Click to expand...

Why would not this Jim Austin just finish with a powerful:

"And in conclusion, let us present MQA's _real_ tests - the tests that totally discredit these GoldenSound's pathetic attempts! The tests that speak for themselves so Loud-and-Clear - and illustrate MQA benefits so obviously - that no front-page-smear column, or bob's-talk-blog, or any of those plentiful ad-hominem attacks would be never-ever, EVER necessary!"

DimitryZ said:
Have you ever done actual professional testing in any engineering discipline?
Click to expand...

As an engineer who has done a fair bit of testing, I find a lot of products give erroneous results when tested 'incorrectly'. Oddly enough, the products that have the strongest supporters are the ones that survive (and still perform within expected parameters) when users knowingly or unknowingly abuse them.
N

levimax said:
1st unfold non-MQA DAC is no problem with EQ but you can't EQ in front of a MQA DAC (unless you have Roon) because EQ changes the bitstream and it is not longer recognized as MQA by the DAC.
Click to expand...

OK that makes sense now. Doing a little reading, it sounds like the rendering step is an upsampling step not unlike what izotope src does in Audirvana. Little some experimentation, perhaps one could get close to the fully rendered MQA signal with Audirvana while being able to PEQ/REQ.
D

I thought the entire point of MQA was that it "preserved ultrasonics" which are presumably lost in 44.1 mastering?

rkbates said:
As an engineer who has done a fair bit of testing, I find a lot of products give erroneous results when tested 'incorrectly'. Oddly enough, the products that have the strongest supporters are the ones that survive (and still perform within expected parameters) when users knowingly or unknowingly abuse them.
Click to expand...

In my experience, as performance demands increase, the margins errode and system testing parameters become ever more important.

dadregga said:
I thought the entire point of MQA was that it "preserved ultrasonics" which are presumably lost in 44.1 mastering?

Not sure what you mean, but here are @Archimago measurements.

amirm said:
What gets me to post is all the ill-informed stuff I read about it from people who don't know the topic. Stop doing that and I will go do something else. I just showed you again all the wrong things you say about this situation. If you don't like what I am doing, don't keep posting superficial talking points against MQA.

And who cares if you see or don't see benefit. It is a solution for a subset of high-res consuming people who want to use this format. The world of audio has far more serious problems that needs our attention but a few of you can't let this vendetta go. It has become personal for you causing you to lose objectivity.
Click to expand...

Finally caught up with this 'salvo'...

No, you did not "show me" anything about "all the wrong things you say about the situation". (What "situation"?) You've repeated a few general statements of yours, and made a couple of personal attacks (hopefully unintentionally).

...But all that was not the goal. With my initial and follow-on clarifying posts, I simply wanted to offer an alternative view. To let "independent consumers" to hear _my_ MQA/Tidal experience, to let them to form their own "educated opinion". (Fully realizing that this message of mine - as the five of yours I am responding to - will probably be seen by a hundred of folks total, and that is.)

As for "and who cares if you see or don't see benefit." - Naively, I thought that the very premise of your site was to help us - the "lay" consumers as we've been called - to see (and to seek) "benefits"... Through exchanging opinions, experience, and reliable, provable testable (!) data!?

If you want to go solve "far more serious problems that need your attention" - by all means please go! But, for the record, I find you calling my opinion a "vendetta", "ill-informed stuff", "superficial", "become personal" and "causing to lose objectivity" offensive (all this just from a couple of paragraphs of yours). Suggest a simpler and more civilized term for it: “a person who disagrees with you.”

So, let's either (1) agree our positions to co-exist and be mutually-respected and respectful; or (2) continue the debate (but please, PLEASE, lets make it constructive and leave all those personal attacks out.) And maybe we can start by implementing >this<?

PS. You’ve fired at all of them, but left out this one. (Secretly helping me to make the point? )

Raindog123 said:
…And to the most fundamental question of “At the end, what is the SQ benefit of MQA?”, there is anything but an answer…
Click to expand...

Can you give an example of your configuration/solution?
F

noobie1 said:
Is there evidence that MQA is getting any substantial royalties for licensing its product? I read on APS awhile back that MQA is likely giving its license for essentially free in order to gain market share. Given how they are bleeding money and desperately need a large streaming service to adopt their product, I could certainly see a scenario where this is true.
Click to expand...

Some manufacturers are reporting the fees for MQA addition are substantial.
Roon and anyone else who markets an MQA software decoder ("first unfold") in their software apparently plays a licensing fee per MQA track played back.
Last edited: Jun 6, 2021

amirm said:
As I have repeatedly explained, the most common platform for consumption of MQA which has DSP is Roon and it has no problem managing both.
Click to expand...

To get back on [semi-]technical track...

What is the SECOND most common platform to do that? (And what is the price of Roon today, eg life-time?)
F

amirm said:
I didn't tell you MQA is free to users. I said MQA is free to those of us who use software decoders in Roon (and Tidal App). None of us have ever paid for MQA. I paid for Roon what I paid without Tidal or MQA. I then subscribed to Tidal and Tidal later added MQA without raising its price. And Roon added decoding for the same without asking me for more money.

Roon charges plenty of money for their player and MQA costs are cost of doing business.
Click to expand...

A fundamental misunderstanding of basic economics. You are paying, whether it is visible or not.
And the upcoming Tidal pricing tiers includes a premium for MQA.
F

RobS said:
So how much did MQA pay Jim Austin to write that?
Click to expand...

Jim Austin has been in the tank for MQA from the beginning. He decided it was "good for the industry" (meaning audio magazines, record labels, manufacturers - but not consumers) so we should accept it despite all its flaws negative aspects, and potentially devastating aspects.

They don't need to pay him. He represents "the industry" and doesn't see himself as having a different role. It took him ages to stop referring in print to MQA unfolded to lossless 24/352 and the like, even though he was well aware no such thing exists.

And how much do you want to bet that Jim Austin had multiple discussions with MQA about his response before composing his "independent" editorial?
Last edited: Jun 6, 2021

firedog said:
A fundamental misunderstanding of basic economics. You are paying, whether it is visible or not.
And the upcoming Tidal pricing tiers includes a premium for MQA.
Click to expand...

Of course, subscribers are paying. But if there are a significant number of subscribers there for the MQA, then the economies of scale can be passed on to all subscribers.
Last edited: Jun 6, 2021
MQA is dead!

awdeeoh said:
no need to capture, just download directly from the server, it'll take less than a month.
Click to expand...

How? Do you mean with the open source downloader? It appears that this tool can only download one album at a time without human intervention. After each album download one must then select another album for download. With 60M tracks, there are conceivably 6M albums, requiring as many human interventions. Do you still think it can be done in less than a month?
Last edited: Jun 6, 2021
MQA is dead!
B 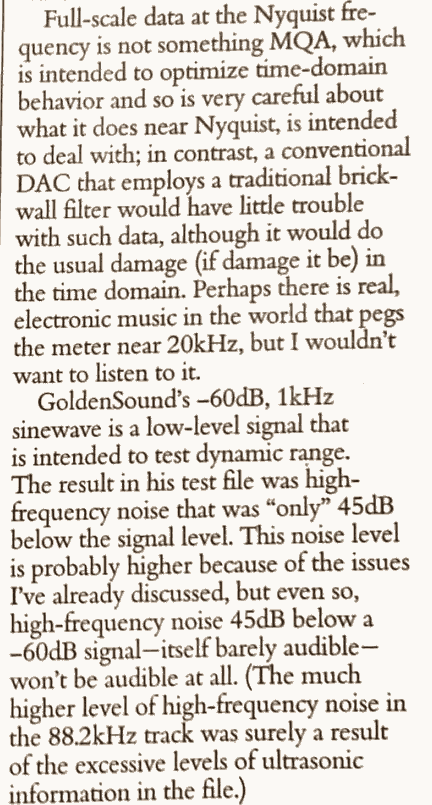 First paragraph: Of course you don't want to listen to it, because if you do, your "time domain" nonsense will fall apart. If you still want to listen, here is a real example, with flac snippet attached:
https://www.audiosciencereview.com/...-music-on-tidal-to-test-mqa.22549/post-807177

Second paragraph: Let's see. The decoded MQA file with the same file name as the screenshot in GoldenOne 's archive cannot even achieve the dynamic range of 16-bit 88.2kHz with much softer noise shaping. Also, if the MQA encoder cannot resolve excessive high frequency content like white noise and other ultrasonic tones in GoldenOne's test file, only those parts of the file should had been compromised. The MQA encoding process indiscriminately added large amount of ultrasonic noise in the whole file, even in portions only contain digital silence, it makes no sense at all, just bad design. The added noise even clipped a -3dBFS 1kHz tone, how can this be "near Nyquist"? 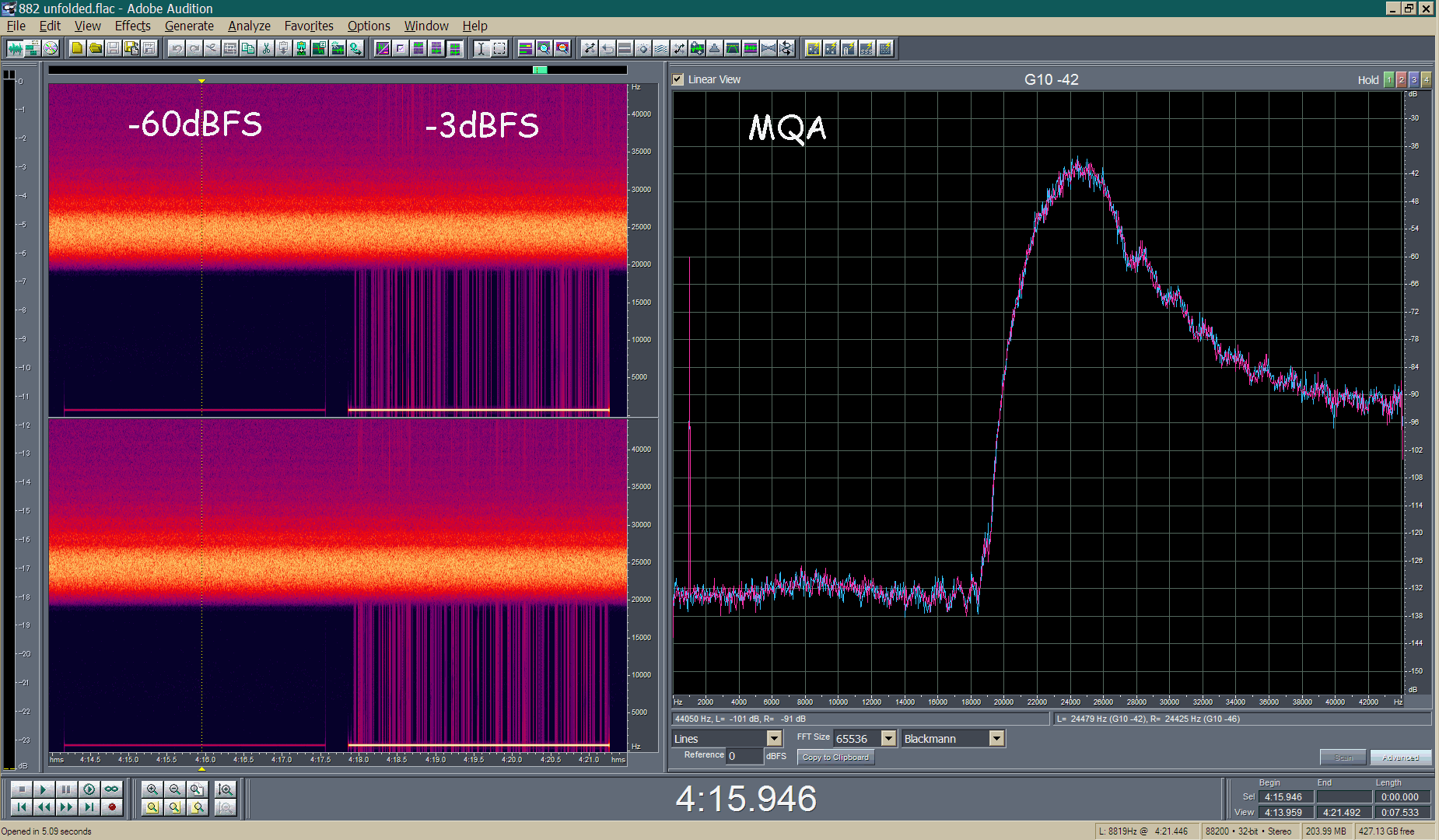 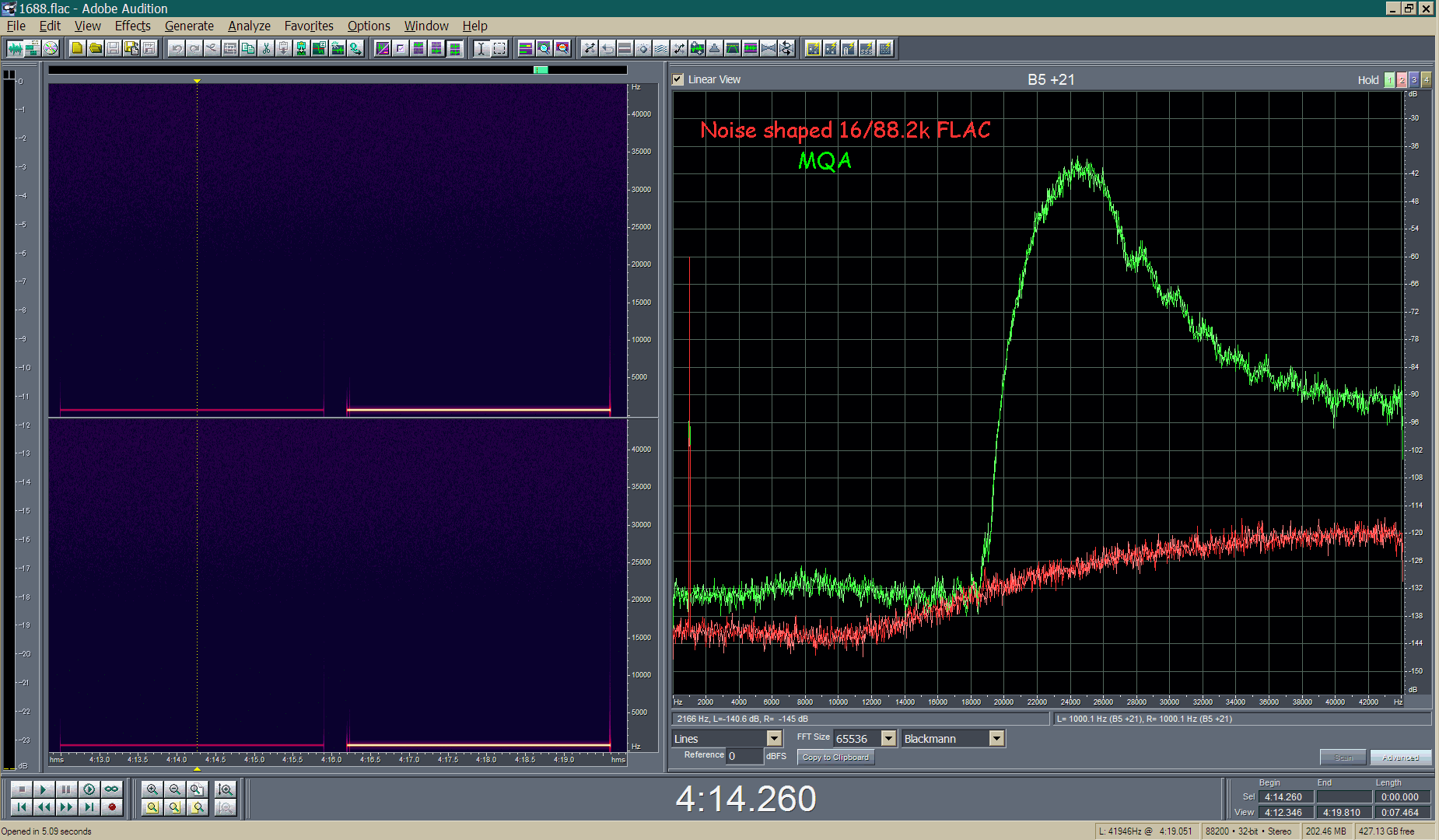 firedog said:
Some manufacturers are reporting the fees for MQA addition are substantial.
Roon and anyone else who markets an MQA software decoder ("first unfold") in their software apparently plays a licensing fee per MQA track played back.
Click to expand...

Got a link for the information please?

amirm said:
You sure are on a roll here with more fallacious summaries. Hardly anyone buys copies of files in MQA. Almost every bit of MQA is consumed in streaming. And you spin this as it just works for me? No. It works that way for everyone. Sure, two people in Japan buy MQA CDs and play them in hardware capable MQA player. So what?
Click to expand...

amirm said:
I read that useless explanation -- multiple times actually. There is nothing clear about it:

"We actually can show this effect quite prominently when looking/listening to MQA-encoded music that began life as 44.1 or 48kHz. Very obvious examples are pop recordings such as this Bruno Mars album below originally of 44.1kHz sampling rate, fed into the MQA encoder and then unfolded to 88.2kHz within the Tidal software. "

You need to know what the labels gave them to encode. I have seen tons of horror stories which I have documented. You don't need MQA to screw things up -- the labels do that routinely.

Regardless, my point was that this is just a bunch of guessing games which contrary to what Archimago said, require fair bit of expertise just to know the vocabulary let alone what is really going on. The notion then that he can be Joe-anybody online to do this analysis is a farce.
Click to expand...

Anthony T said:
Got a link for the information please?
Click to expand...

Raindog123 said:
Can you give an example of your configuration/solution?
Click to expand...

Its either Roon, or they are EQ after the core decode in (for eg) the Tidal desktop app , to EAPO or similar and not caring that the receiving DAC wont then be able to do the farcical "final" unfold (the upsampling one) so no blue light! This is of course a perfectly acceptable position as they already have the "best" of MQA from the core decode
Too many DACs> Too many amps> Too many headphones

To NAD C658 owners - Can someone please test this for me? (female vocal distortion)
2