This is a review and detailed measurements of the Moondrop Blessing 2 IEM. It was sent to me by Shenzhenaudio and costs US $320. 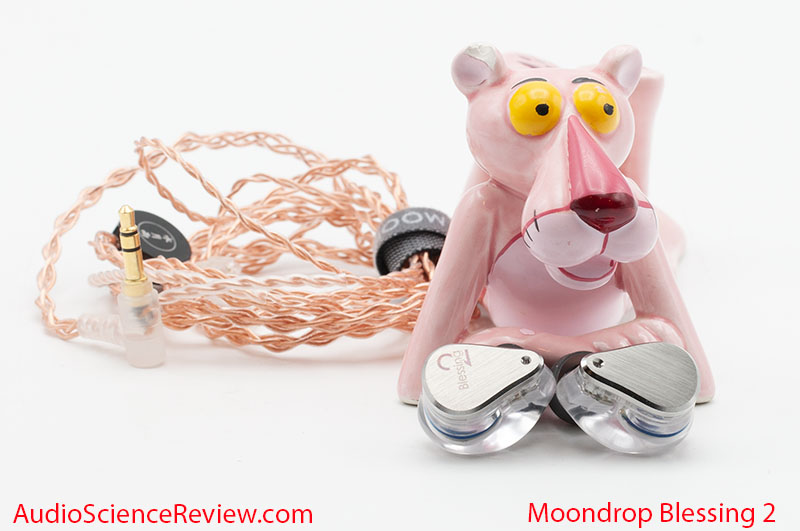 Blessing 2 feels substantial in hand without being overly large. The tips included are silicone and rather thin. This made it harder to mount on my headphone fixture but worked very well for my ears.

Note: The measurements you are about to see are made using a standardized Gras 45C. Headphone/IEM measurements by definition are approximate and variable so don't be surprised if other measurements even if performed with the same fixtures as mine, differ in end results. Protocols vary such as headband pressure and averaging (which I don't do). As you will see, I confirm the approximate accuracy of the measurements using Equalization and listening tests. Ultimately headphone measurements are less exact than speakers mostly in bass and above a few kilohertz so keep that in mind as you read these tests. If you think you have an exact idea of a headphone/IEM performance, you are likely wrong! 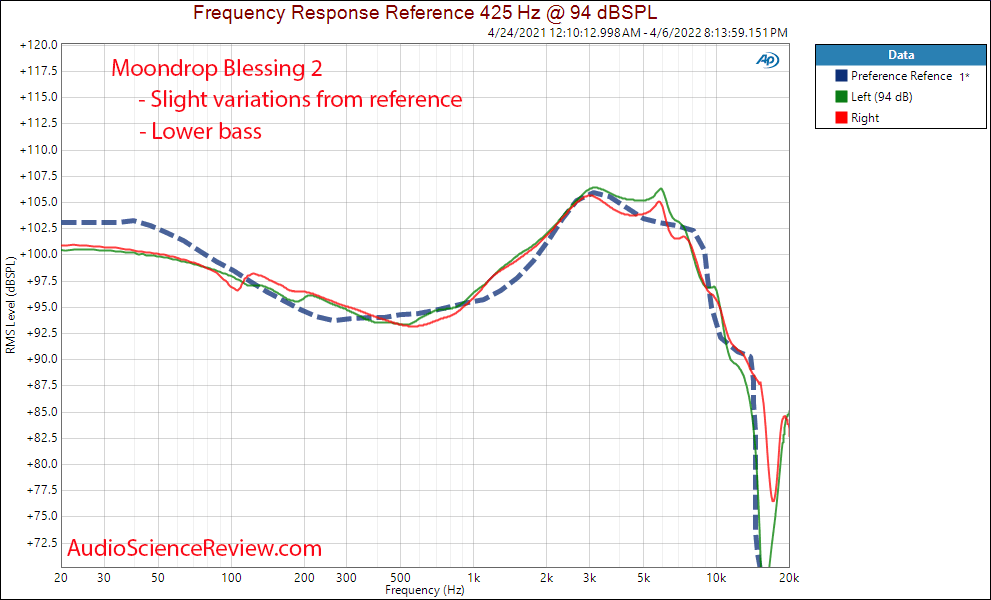 When I first measured these, I thought they had target Harman curve but my fitment was wrong given the small differences. Then I read up and it seems they have their own tweaked target they call VDSF (diffused target of sorts). Variations from Harman target were small so I was very curious as to its audibility (see listening test section). Relative response shows how small the variations are: 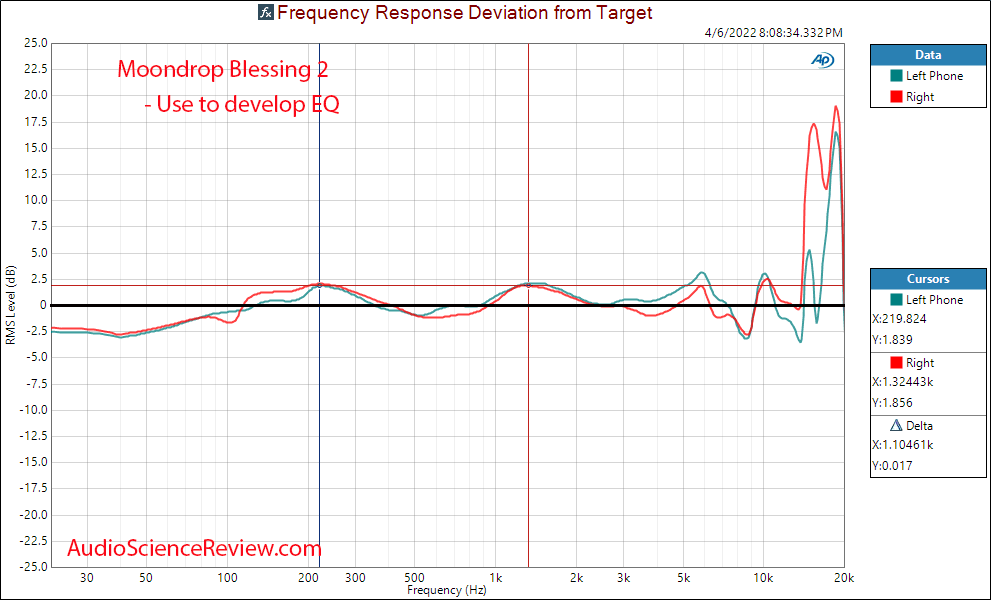 I was dismayed to see the same distortion which we saw in another BA driver IEM: 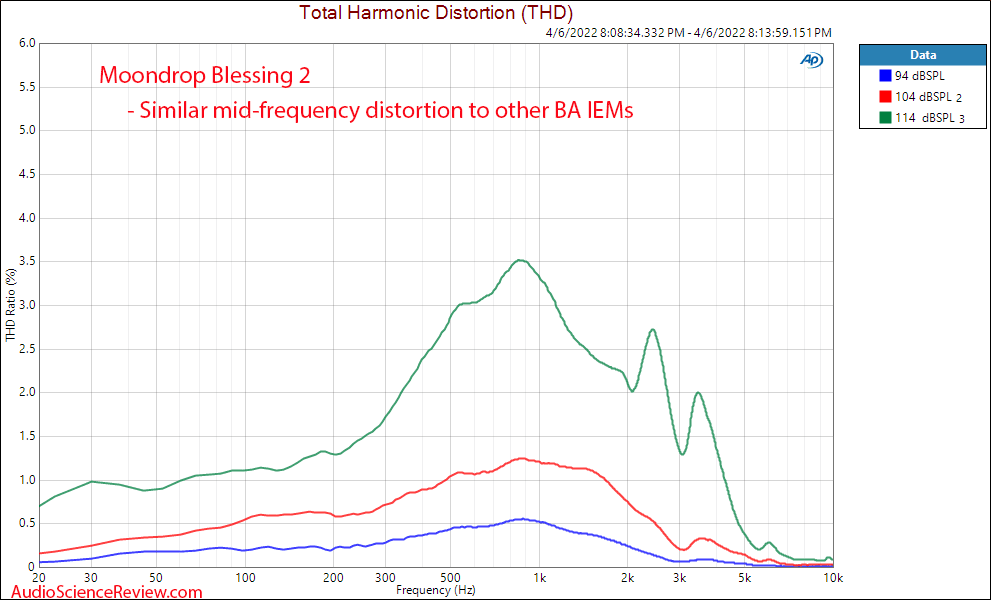 I worked on qualifying this in listening tests. 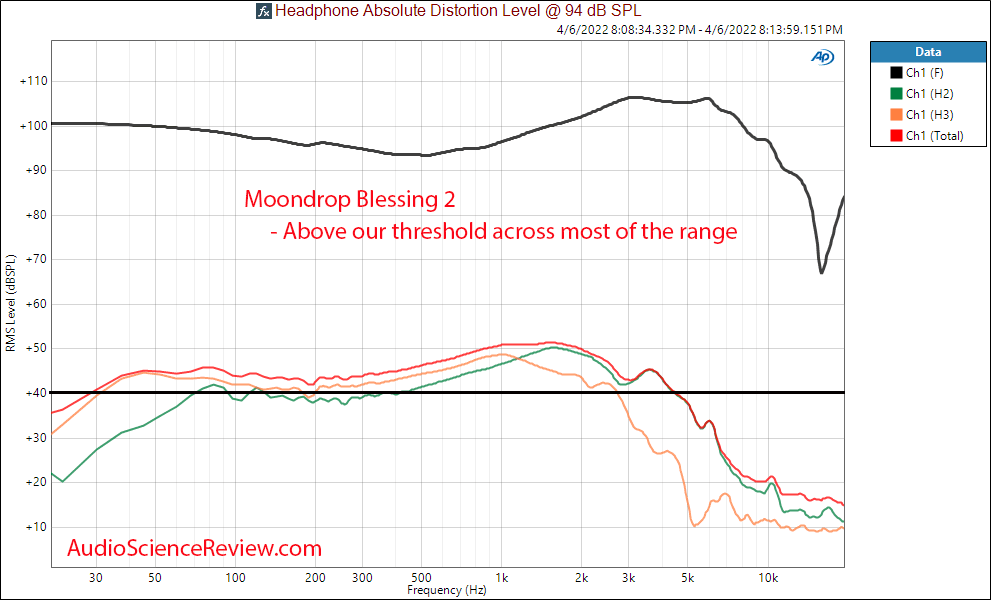 Impedance is low and a bit variable: 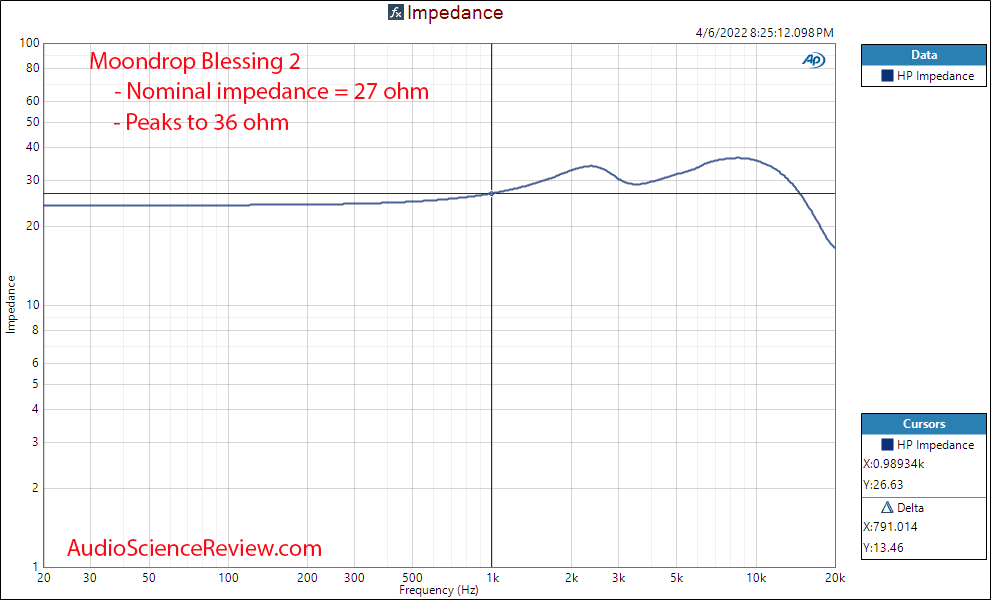 Sensitivity is on the low side meaning you need more power to drive it: 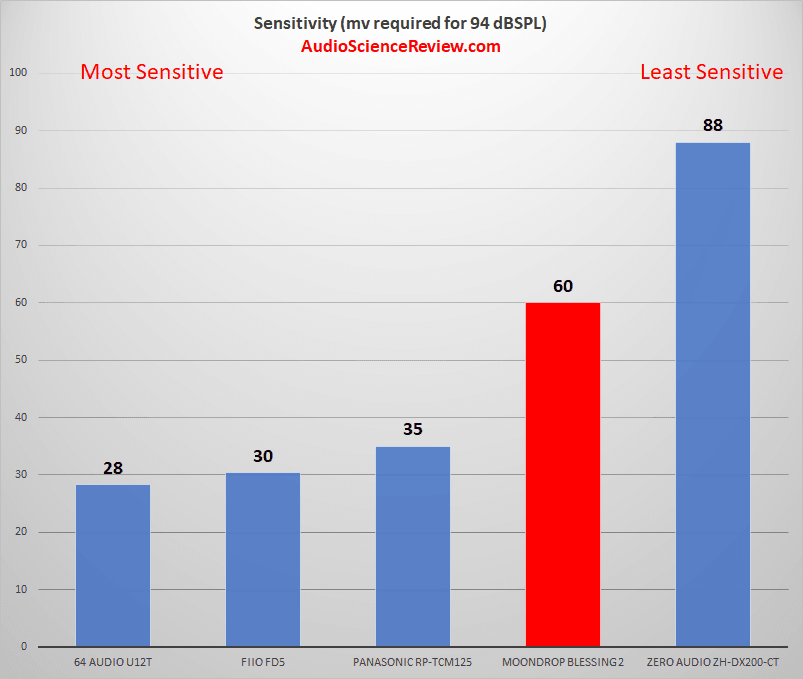 Group delay is clean and uneventful: 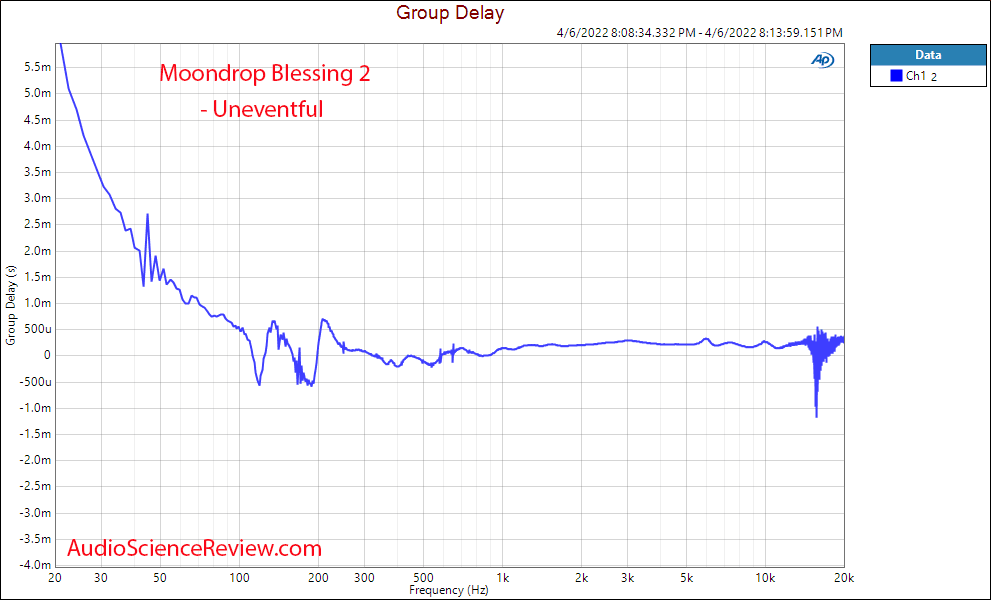 Moondrop Blessing 2 Listening Tests
First impression was, "hey this is quite good and doesn't need changing." Experience shows however that absolute evaluation is not truthful. So I developed an EQ based on differences with our target curve: 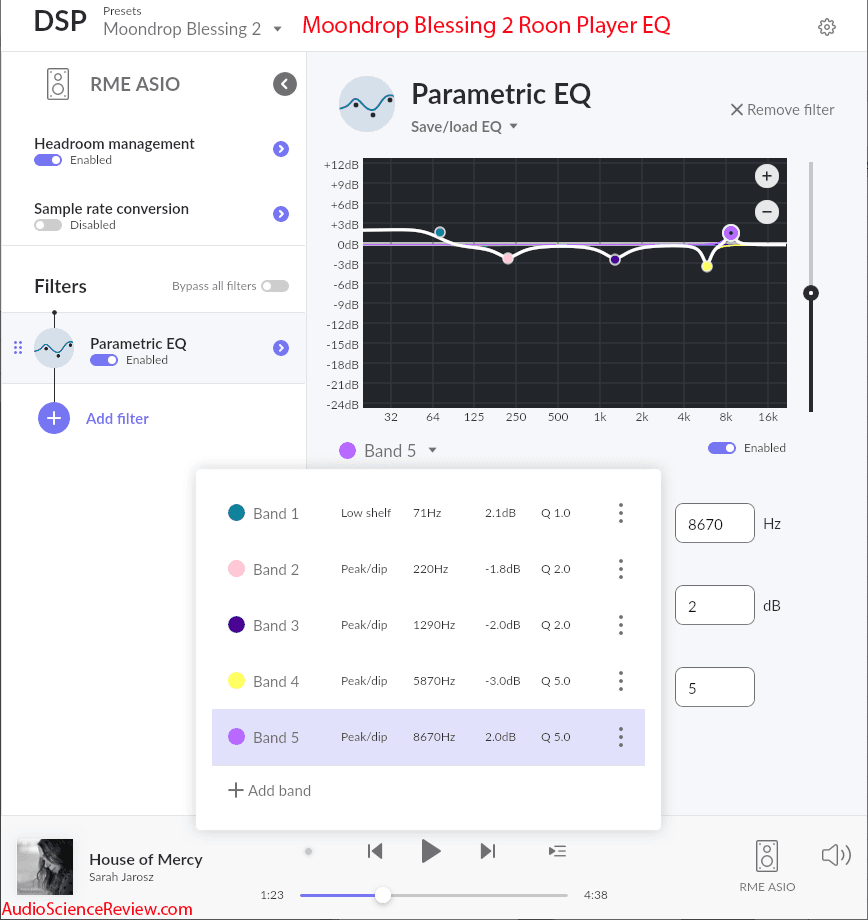 AB testing quickly showed that the sound without EQ was thinner and a bit harsh. It would be fascinating to have a formal study of this to see where preference lands in blind test as the difference is small and is two flavors of good sound.

With EQ in place, the fidelity was startling good at times. The level of detail was amazing during some periods. I then cranked up the volume some and noticed distortion in upper bass with some subtle ticking. Push it harder and it compresses, refusing to get louder and and become more congested. Mind you, this is at totally unhealthy listing levels but shows you that the distortion measurements are accurate and predictive.

I have yet to hear an IEM with good sub-bass. Response of the Blessing 2 was better than average (with EQ) but still very far from any over the ear headphone.

Conclusions
Without EQ, the response of Blessing 2 is close enough to our target to beat out performance of vast number of speakers on tonality! With EQ, it becomes even better, with warmer, and less harsh sound. It can't handle ear bleeding levels but maybe that encourages you to not go there. We are talking about last bit of refinement and performance not being there.

I am going to recommend the Moondrop Blessing 2 especially if you use it with Equalization.

How about Moondrop Aria?
OP

jasonhanjk said:
How about Moondrop Aria?
Click to expand...

I don't have it. But do have the S8 which I will review next.
Amir
Founder, Audio Science Review
Founder, Madrona Digital
Contributing Editor, Widescreen Review Magazine
Click for My Technical Background
My YouTube Channel
H

amirm said:
I don't have it. But do have the S8 which I will review next.
Click to expand...

Any Moondrop Kato around?
Y

Nice one! Any chance in future to have a set of UERM or UERR for measurement? Really interested to see how these long regarded as holy grail of neutrality fares in measurement and listening tests

So this versus the Fiio FD5?
F

Kato would be excellent. It's a fantastic IEM.

Too bad on the distortion, otherwise great!
H

Too bad on the distortion, otherwise great!
Click to expand...

The distortion figures we are seeing again is the nature of BA drivers. I'm not a huge fan of BA's and prefer single DD designs.
P 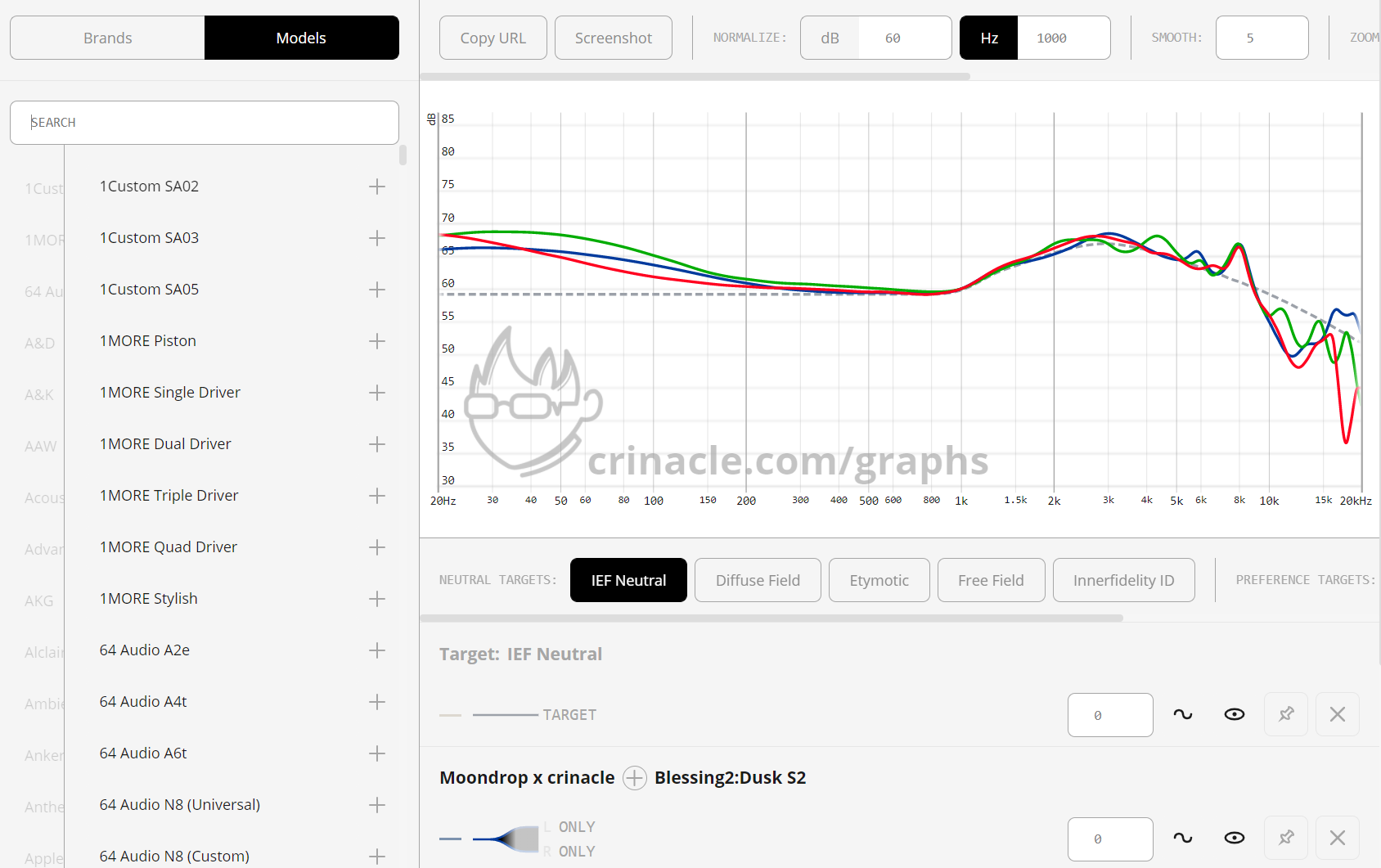 Based on the measurements here it seems the Dusk version has around 4dB more bass. *I wonder what effect it will have on the distortion*
B

People should be warned that they are big though, not sure small ears will like it. I always use the largest tips so I guess I am OK but the stems are substantial.

These days my galaxy buds 2 get more use, wireless is just more convenient
G

Balanced-armature transducers were used in the first telephone handsets, but moving-coil transducers have better performance. To hear YouTube reviewers talk about balanced-armatures in IEMs, you would think they were a great new innovation.
R

I own the Dusk. That should have a little more low bass than this "regular" version.
I hope Amir gets to compare the 2 versions objectively and subjectively some time in the near future.
You must log in or register to reply here.

Good sounding IEMs that I tried in CanJam Singapore 2022