EDIT 29/10: I have resolved my measurement issue and also added a revised THD sweep.

Hopefully this is the correct area to post this.

Following on from the measurements @amirm did of the Yamaha A-1 amplifier, I thought I'd measure my Sony TA-F540E

This amp is rated at 90w x2 into 8 ohms - but I could only get 55w RMS per channel without any significant THD (both channels driven).

If people like this, I also have a JVC AX-5 which I could measure, along with a couple of other amps (if my dummy load can take the pressure!!)

Here are the graphs. 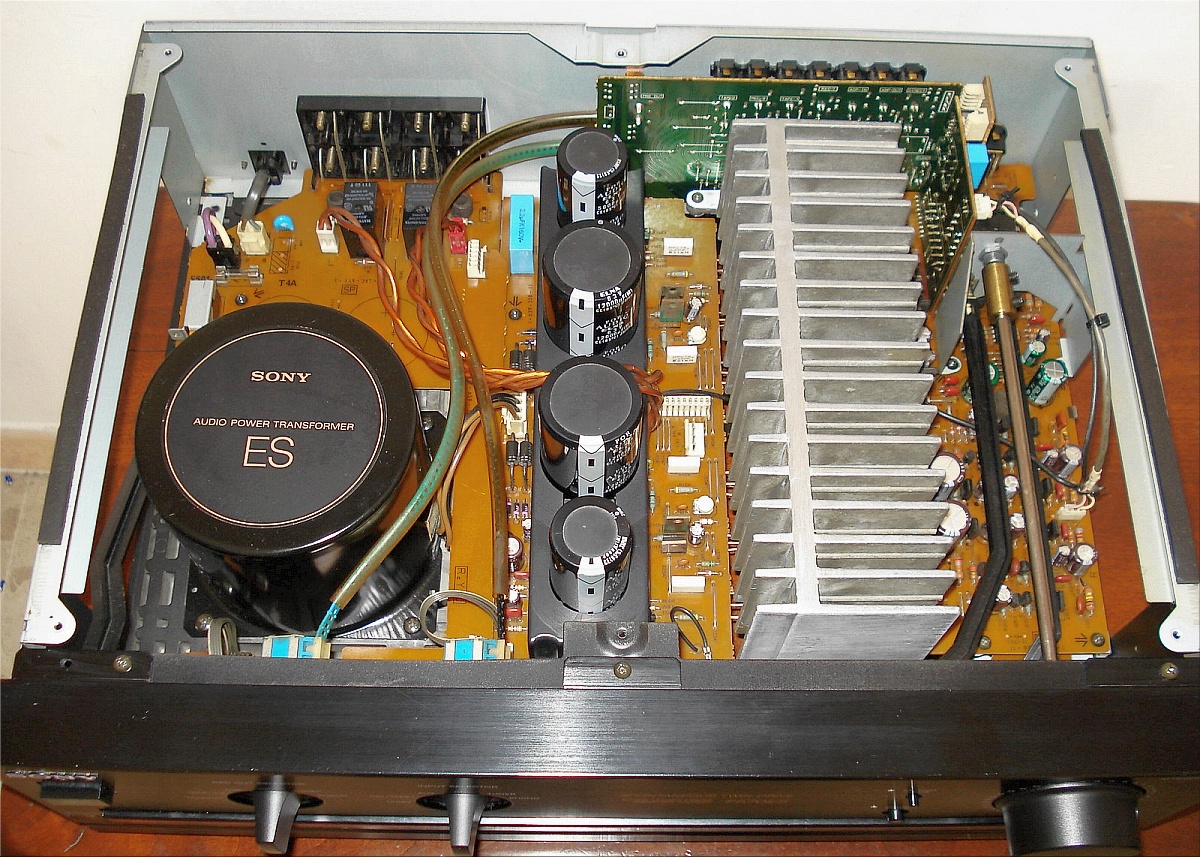 pozz said:
Can you post a few details about your test rig?
Click to expand...
My test rig is an Asus Xonar Essence STX sound card for the ADC, and a customised CS4398 DAC (Ebay kit) to provide the test signals.

The DAC is fed via SPDIF from a USB to SPDIF converter.

The input to the sound card is buffered by a preamp with a gain of 2x.

For measuring the amplifier, I used an 8 ohm dummy load, with the output taken from a voltage divider (12k and 470 ohm to ground).

Attached is a reference plot of the 'loopback'.

Very nice work here. And of course us test happy people would like to see you test JVC AX-5.

I notice Sony claimed THD of less than .008% while you obtained .0033% driven to 55 wpc. So looks like your results are in line with claims. I also wonder with the long train of 60 hz harmonics if the caps are up to snuff in this unit. Or maybe that was normal to them.

In any case, thanks for doing the measurements.
"The real purpose of the scientific method is to make sure Nature hasn't misled you into thinking you know something you don't actually know." Robert M. Persig

Ceburaska said:
why aren’t you happy with the THD/ freq graph?
Click to expand...
There appears to be some aberration in the software I am using. I have switched to a different app (Arta steps) and have now provided a revised THD sweep.

The aberration was that the THD measurement was unstable from the beginning of the measurement until ~ 1.5kHz where it stabilised.
https://gtkc.net
https://vintagetechnics.audio
B

This bodes well for the Sony TA-AX6 I just scored at goodwill. Most people in this hobby thumb their noses at anything Sony. But quite a few of their products have shown promising measurements here.
O

I don't know when Sony went to hell, but they sure did. The way I found this forum was by googling Sony HAP-S1 reviews. You should read this one:
https://www.audiosciencereview.com/...urements-of-sony-hap-s1-streamer-server.6921/
Amir probably saved me $1000, since I was looking at one of these in the local home theatre store. On the other hand, older Sony seems just fine: I own an early 90's ES receiver which has always been satisfactory. Maybe it has something to do with them getting in the media business and the accompanying management changes. Whatever happened, I would not touch new Sony gear today, it is not what it was.
B

If you look at the AVR that have been reviewed and measured here. They're universally lacking. But currently a Sony is at the top of the heap I believe. Beating out an Anthem and a NAD.

In the 2-channel mode, you make a loopback in one channel and put the device under test into the 2nd channel loop. This eliminates soundcard inherent frequency response error.
pmacura.cz/audiopage.html
OP

pma said:
Re frequency response, you might consider 2-channel measurement with ARTA/STEPS, free software.
Click to expand...
I have previously used Arta for that purpose, but had doubts about it's accuracy - however - following an email to the Arta developer I now understand why I thought it was inaccurate.

I also have a bode plotter function in my USB 'scope that I could use - I probably should have used that (good up to 1MHz).
https://gtkc.net
https://vintagetechnics.audio
You must log in or register to reply here.
Share: Facebook Google+ Reddit Pinterest Tumblr WhatsApp Email Link