This is a review and detailed measurements of the Drop Focal Elex. It was kindly loaned to me by a member and costs US $700.

The Elex naturally follows the design of the rest of Focal line: 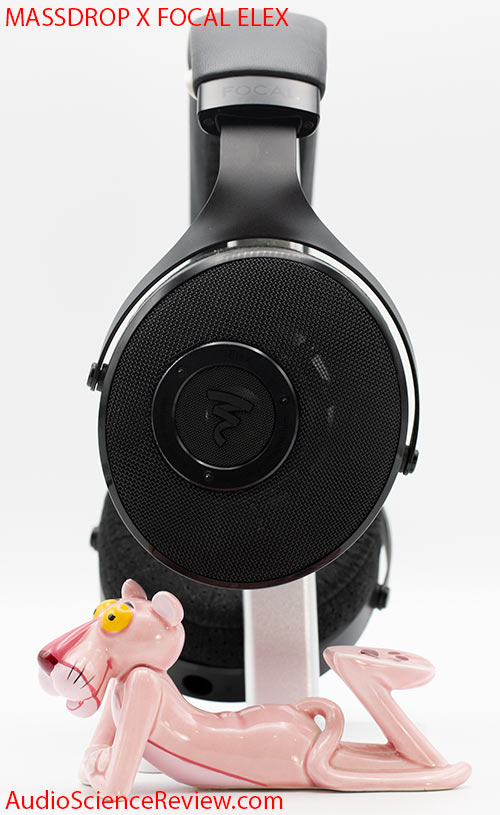 The headphone weighs 440 grams and has inside cup dimensions of 62x55x27 (height, width, depth). Note that the driver is angled so the cup depth varies.

Overall comfort was excellent. The owner must have a similar shape to my face and head as to have worn off the pads just right.

Mounting the headphone on the text fixture was easy requiring very little manipulation to get left and right to match at dual frequencies (within reason).

Focal Elex Measurements
As usual, we start with our stereo frequency response measurements: 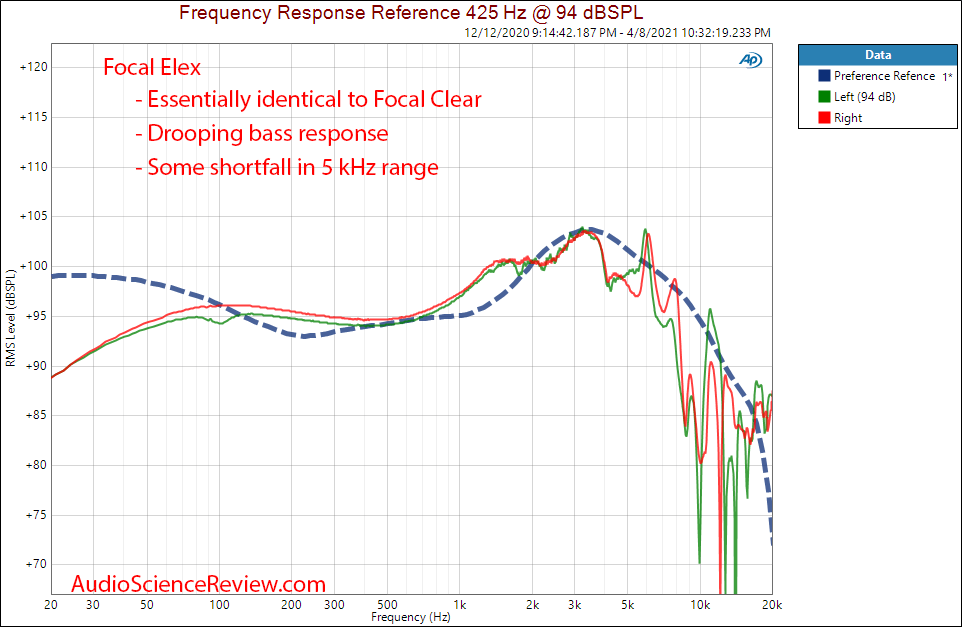 That sure looks similar to Focal Clear frequency response: 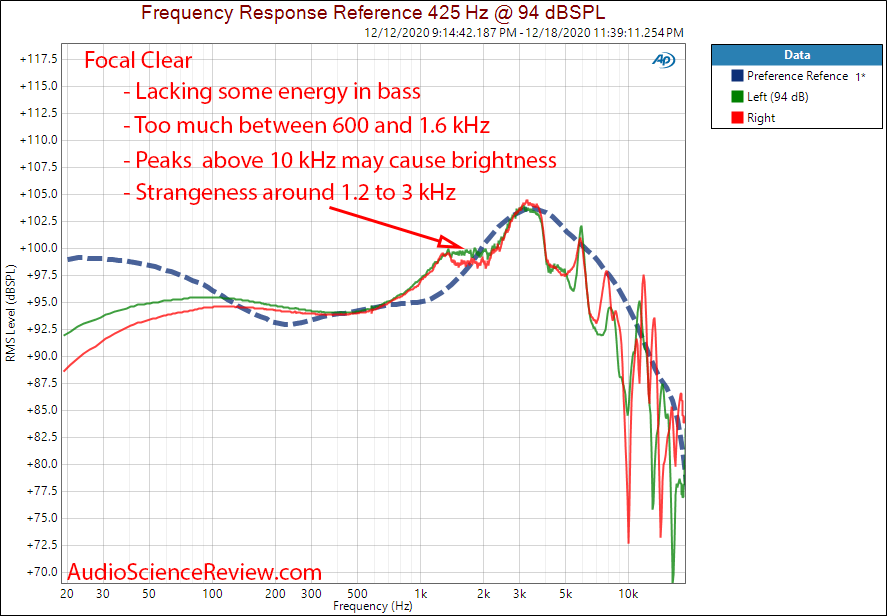 The only thing different is better channel matching in Elex which could be a measure difference as much as sample difference.

Even the Focal Utopia looks similar: 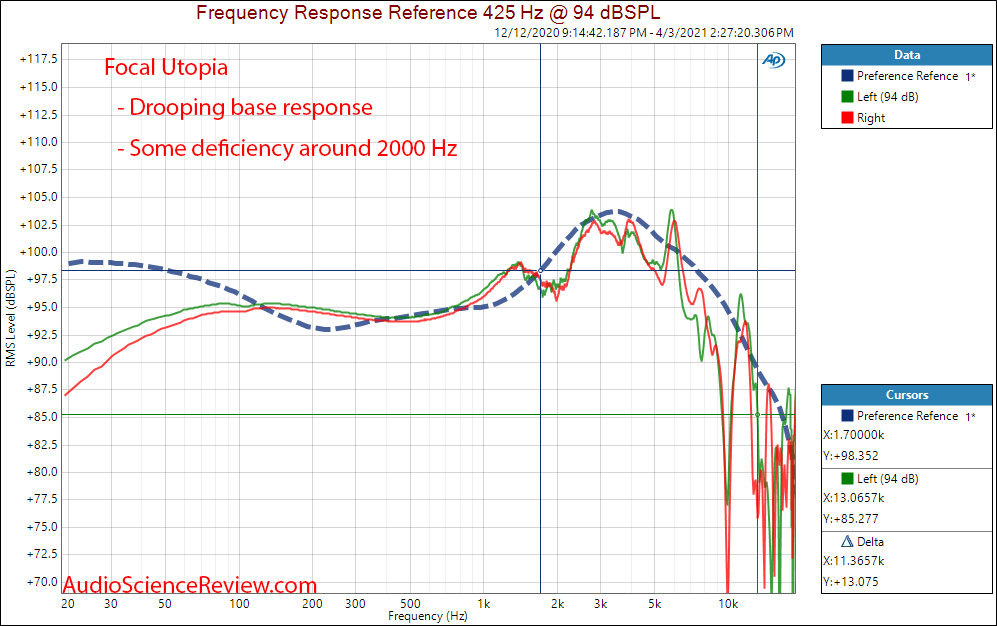 Looks like they have their own target response that all of these are matched to.

Back to Elex, the relative frequency response is thus: 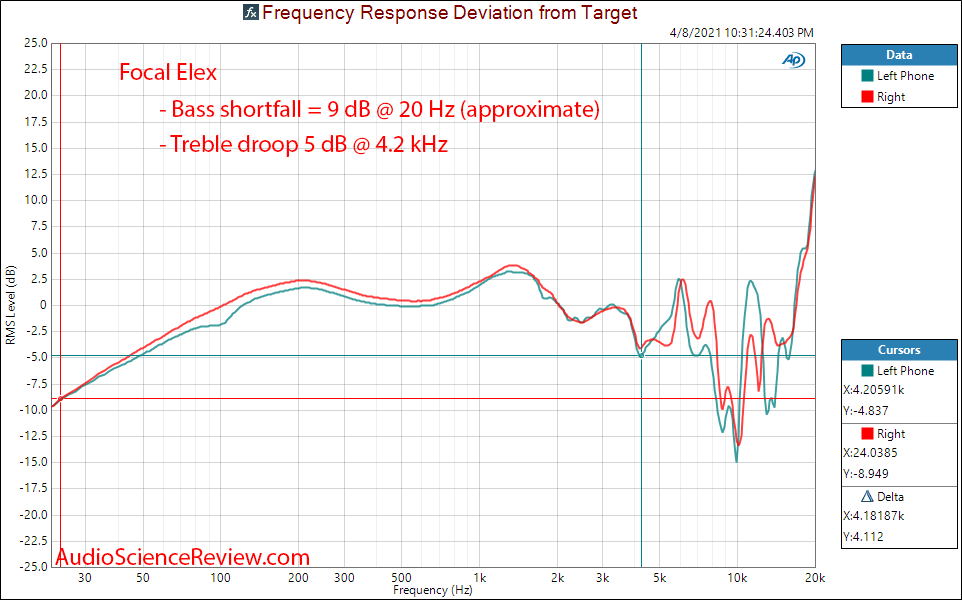 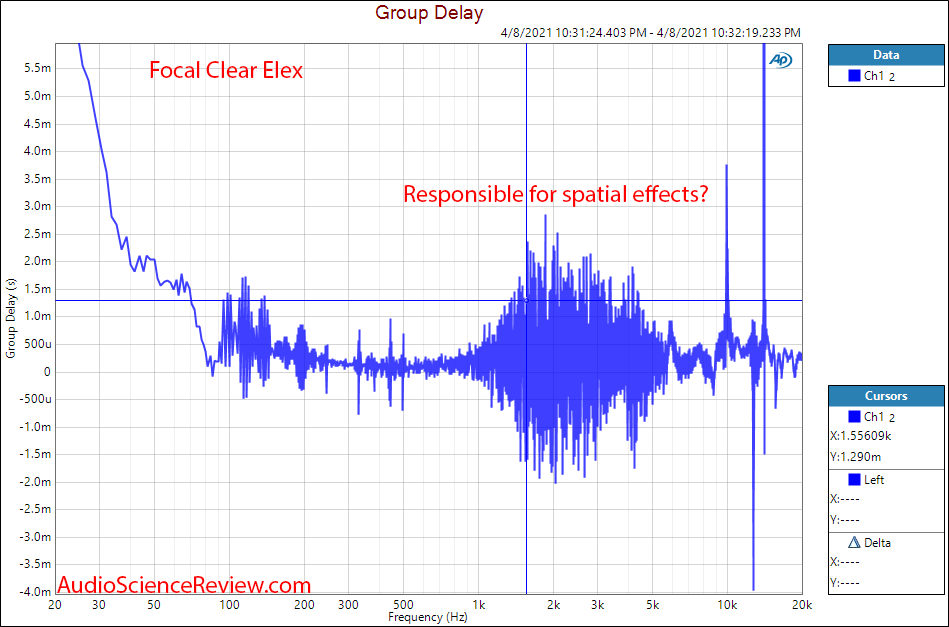 I have noted a member's hypothesis that messiness in group delay in that 2 to 4 kHz may result in better spatial effect.

As if we need any more proof of sisterhood between the Clear and Elex, here is the distortion graph which matches yet again: 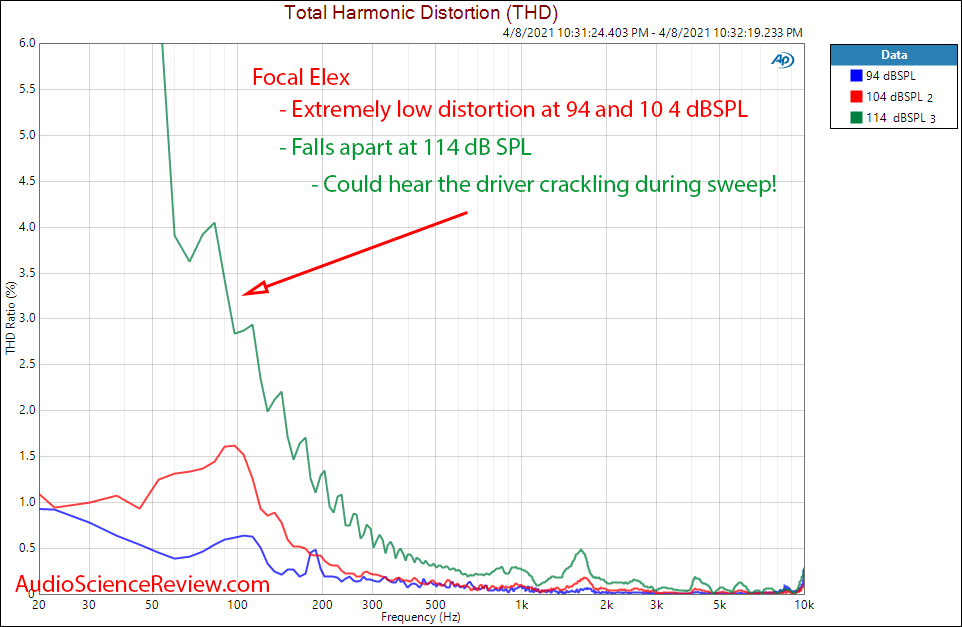 One difference though: this time I did not have my own headphones on and listened to the sweeps. I was horrified to hear the drivers crackle at 114 dBSPL! The clear must have done this as well given that signature response in green: 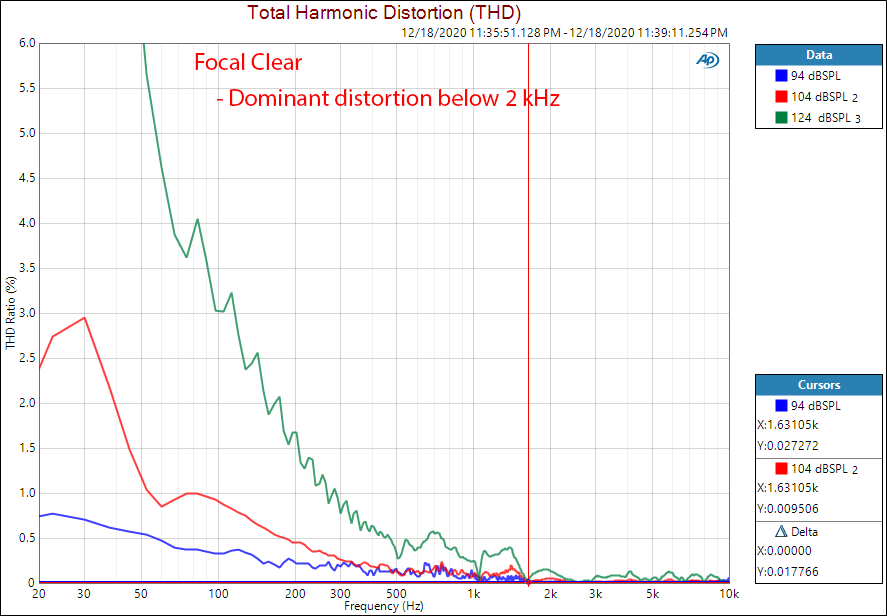 So whoever thinks the driver limitations here is imagined, well, they need to stop saying that.

On the positive front is the incredibly low distortion at 94 dBSPL (blue). The line literally melts into the "0" percentage. Even at 114 dBSPL, there is no distortion to speak of above 2 kHz. So as long as you don't hit the limit of the drive, this is one low distortion transducer. Maybe that is the trade off they made?

Here is the distortion graph in absolute scale: 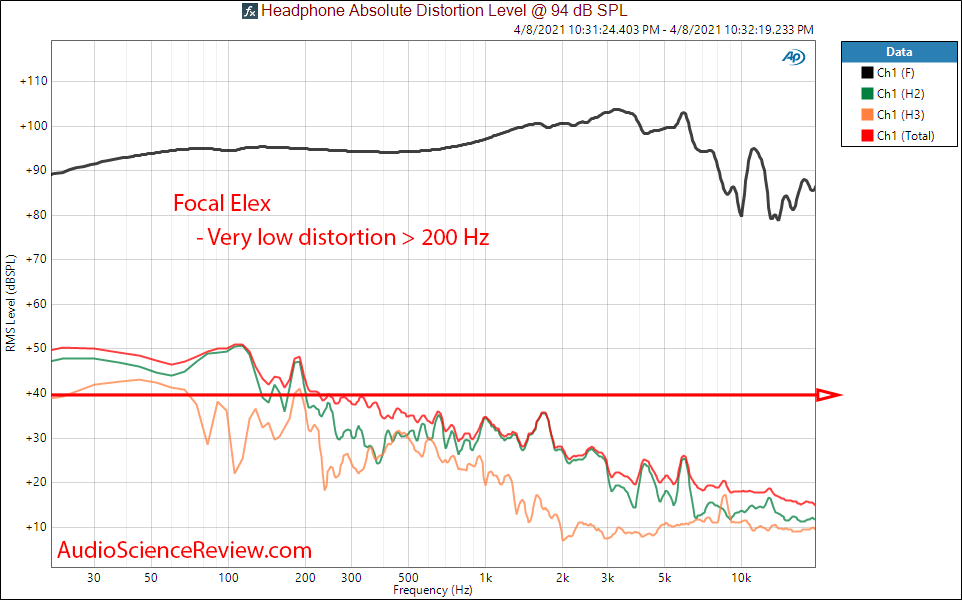 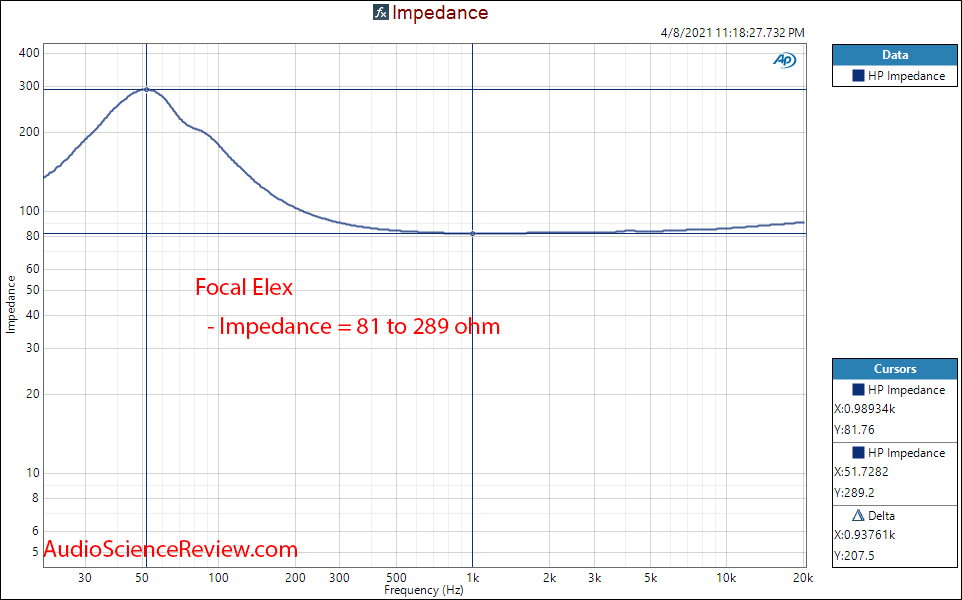 Sensitivity is good requiring half as much drive as Sennheiser HD-650 for example: 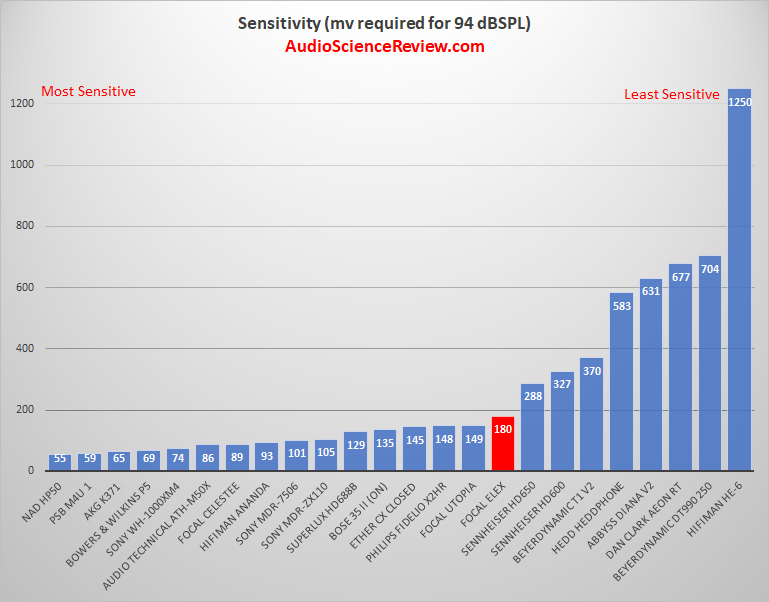 Focal Elex Listening Tests
As with the Focal Clear, the non-equalized response was fine but nothing to get excited about. Similar equalization (created from scratch here rather than copied from Clear), resulted in major improvement: 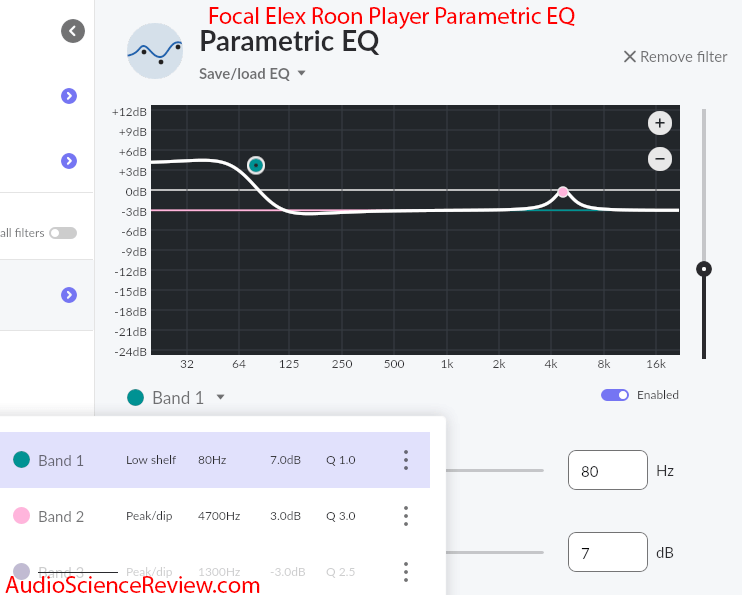 I may be biased by distortion measurements but I constantly went "oh that note is clean!" This happened across the board in many tracks. Quiet notes were especially a delight with the Elex.

It was not long though before I got horrified with the crackling sound. Oh man is this thing scary. The only audio gear that I am scared of is my 1000 watt power amplifier which has enough juice to send a speaker to Mars! The Elex headphone had me in the same spot where I had to have my hand on the volume control. I could not enjoy any track at high volume as I kept worrying about the crackle.

So I turned the volume down and got busy with another review. A couple of hours later, I realized how comfortable this headphone was and how nice its sound was at low volumes.

Conclusions
Let's cut to the chase: if the Focal Elex did not have the driver limit with that nasty crackle, it would get the highest remarks from me. It has an utlra low-distortion driver that lends itself well to equalization. Once there, the sound is a delight as long as you keep the volume reasonable and sensible. Equalization sadly gets you closer to its limit and in my application would surely hit the limit. What a shame.

I am over the shock of the driver limit that I had with the Clear and decided to upgrade my rating of Elex to "recommended."

Wow, I knew it was a close relative to the Utopia and Clear, but surprising to see just how close, and even measured slightly better in distortion than the clear at 104dB. Thanks for yet another review tonight!

@amirm thx for another review! You are a beast.

Interesting that you found these comfy. I found them so heavy that I could barely wear them for more than 45 min at a time. I do have a small head though.
SMSL M300 MKII+A90+HD800S/HD6XX/Aeon2 Open
Vanatoo t0

Hi,
Here are some thoughts about the EQ.

Notes about the EQ design:

Note that -1.5dB was used for HF to be closer to the initial voicing.
The score in bracket corresponds to the neutral/flat Harman curve.

Last edited: Apr 10, 2021
Process and analyze the NFS data yourself, Correct Spinorama, Directivity 2D and 3D live etc. :
Make sure you have the latest version
A Matlab - Octave Tool to calculate the correct Spinorama - CEA2034 from the NFS data
D

Looks like Focal's design philosophy re: headphone drivers is "low distortion until you hit the absolute limit of the driver" vs Sennheiser's - which appears to be "soft onset of distortion, but higher overall" - and in fairness, 114dB is loud as balls even in the bass. I wouldn't even really consider listening past 90 for the sake of my auditory health.
current setup:
RME ADI-2 Pro FS->Neumann KH310s/HD6XX's
Analog processing: Apogee Rosetta 200->Warm Audio Bus Comp/DIYRE L2A->Apogee Rosetta
Recording: ART TransX->ADI-2 Pro FS
F

Thanks for the review Amir. The investigation into spatiality is the most interesting for me. I have the HD650, Ananda and Susvara. How each one presents that affect is so unique and fascinating. There seems to be very little attempt to deconstruct the science in that area. It's only you and Resolve, who have openly spoke about trying to see whats happening.

I have this HP and love it, even without EQ. Thanks Amir for reviewing it!
Purifi & Buckeye All The Way

Great review, thanks as always.

The FR graphs confirm what I heard when comparing the Elex to the Clear and Utopia; the differences are subtle and not commensurate with the massive price difference.

I’ve been listening to the Elex regularly for over a year and have yet to push them to the point where the driver crackles. I’m listening at well below 114db though.
Zensō @ Bandcamp | SoundCloud | Apple Music | Spotify | Tidal | Qobuz
G

I rarely listen at anything over 85dB for more than a few minutes. I must say I enjoy the Elex, and particularly as I got them during their Black Friday promotion last year for $550.

Comfort is okay, but I do find after a few hours that the clamp pressure gets a bit much and can cause a headache. I find them much more comfortable than the HD6XX however which is lighter but has a truly horrible clamp pressure for extended listening.

Amir vs Jaakkopasanen (measured by Oratory1990):

Oratory1990 vs Jaakkopasanen (measured by Oratory1990):

I am curious how they measure compared to the Elears which I own. I feel like I listen at fairly high levels and I've never been able to get mine to crackle even with EQ.

Focal designed their driver with high excursion, but it has a limit. I believe they mentioned that they dont recommend exceeding 90-95dB before it may start to distort heavily and bottom out. It's a lovely headphone in my opinion with great dynamics, but also one where you want to just turn up the volume on as well! (I don't listen super loudly to begin with though, so loud for me is like 80-85dB at 1KHz...)

Is it possible to see harmonics plotted on log scale?
T

While you are over your shock of the poor performance at higher SPLs, have you tested enough headphones that you feel comfortable abandoning that as a good criteria for recommendation?

Maybe it's home theater bias, but not having high SPL output available to me, for a person to sell me a "high end headphone" and omit that capability is just wrong. I really think that if MOST manufacturers at the high end can hit that, it's just not something that's acceptable. I'm sure there will be apologists for whatever reason, and if the driver fits your criteria, great, but I don't think standards should be lowered if it comes out that there are a large amount of high end headphones that don't have this issue with high SPL.

The FR graphs confirm what I heard when comparing the Elex to the Clear and Utopia; the differences are subtle and not commensurate with the massive price difference.

I’ve been listening to the Elex regularly for over a year and have yet to push them to the point where the driver crackles. I’m listening at well below 114db though.
Click to expand...

The block Drop impose on exporting these back to the UK is a real pain, and why I "had" to get a second hand clear instead.
Too many DACs> Too many amps> Too many headphones
G

Jimbob54 said:
The block Drop impose on exporting these back to the UK is a real pain, and why I "had" to get a second hand clear instead.
Click to expand...

Fortunately I have a brother who lives in the USA and he got them for me. It's not Drop's block it's Focal's.

gava said:
Fortunately I have a brother who lives in the USA and he got them for me. It's not Drop's block it's Focal's.
Click to expand...

True, and lucky you!
Too many DACs> Too many amps> Too many headphones
B

What headphones work best for those of us with big ass ears?

beefkabob said:
What headphones work best for those of us with big ass ears?
Click to expand...

Sennheiser 800 series
Too many DACs> Too many amps> Too many headphones
You must log in or register to reply here.