This is a subjective, qualitative, sighted evaluation and comparison of a prototype pair of March Audio Sointuva loudspeakers with Purifi woofers and Bliesma tweeters. The purpose of the exercise was for Alan (Mr March Audio) to get some feedback on the prototypes from “fresh ears” and to geek out with a fellow ASR member. I have no comments on price, looks, build quality, market positioning or anything else except how they sound.

More words are available below if you have the time...

Before we begin:
I have no prior association with Alan or with March Audio. Nor am I in the market for any new gear so he’s not going to sell anything to me. We don’t have a lot of hifi manufacturers in Western Australia and I PMed Alan to see if I could visit him since I will be on holiday in his home town of Albany in a few weeks time. As it happened he was visiting Perth sooner than I was visiting Albany so we arranged for him to bring the Sointuvas over to my house.

What about COVID you may be asking? We are very very lucky to live in the remotest part of the developed world. There has been no COVID in WA for over 6 months now. so we have few to no restrictions on our activities. Family and friends elsewhere are not so lucky and we hope things get better as soon as possible.

OK but why no measurements, surely this is Audio Science Review, not HiFi+? Frankly we didn’t have the time or inclination. Since everything was done in my listening room the best we would have got is an MMM from the main listening position and Alan already has much better free space measurements. It would have been great to stick a miniDSP in the chain and fiddle with EQ, but there wasn’t time. It would also have been interesting to see what the RoomPerfect auto-EQ in my Lyngdorf amp did for the speakers, but again lack of time, and I would have had to erase my existing settings. I don’t have Amir’s training but I do know how to listen for flaws in a speaker, so my ears would have to do. 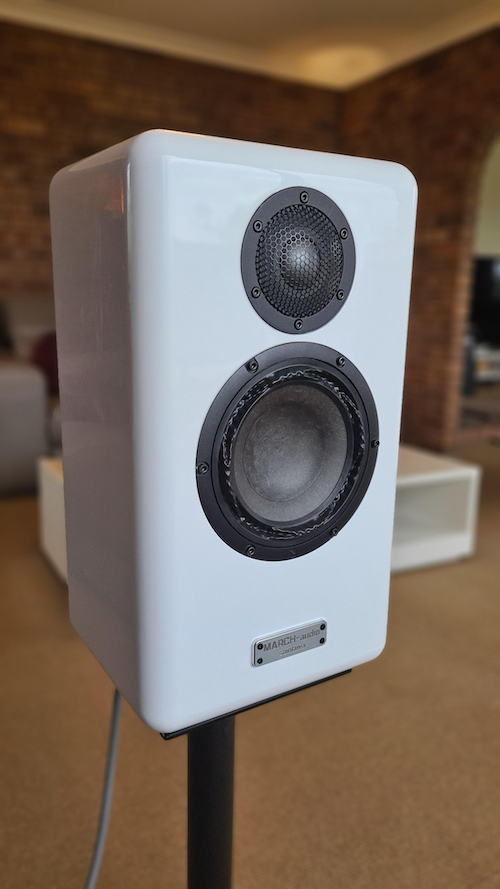 The Sointuvas are mid-sized passive standmounts using a Purifi 6.5” woofer, a Bliesma tweeter and two Purifi passive radiators. The design goal is neutral response, deep bass and very low distortion in a moderately sized enclosure, so that for the intended domestic setting a subwoofer is not necessary.

There are some interesting technical points to note:
Baseline for comparison:
My main system is Lyngdorf W210 woofers crossed over at 180Hz to Sonus Faber Cremona Auditors. The woofer and speaker placement and choice of crossover frequency mostly eliminates floor bounce and rear wall quarter wave issues. I bought the Sonus Fabers before I was educated in speaker science, but according to https://redspade-audio.blogspot.com/2013/02/sonus-faber-cremona-auditor-stand-mount.html they actually have a fairly modern dispersion characteristic. The W210 woofers are designed to go in the corners behind the main speakers, and have 2x10” drivers each, with ports tuned to 20Hz or so. Room correction is mandatory with these woofers and is applied via “RoomPerfect” built into my Lyngdorf TDAi2200 amp. It’s not Dirac, it’s over 10 years old now, but it’s what I have. Amir reviewed the modern version here: https://www.audiosciencereview.com/...measurements-of-lyngdorf-roomperfect-eq.6799/

Getting started:
First we had to move the Sointuvas around to get an even bass response in the room. As passive speakers with no room EQ applied placement is clearly important. The room itself is 4m wide, 5.5m long, 3.5m high, and fairly well damped by rugs and furniture and curtains. The Sointuvas ended up around 40cm from the wall and curtains behind them, and 1m from the side walls, facing down the length of the room with a bit of toe-in. During that process we also identified that a change Alan had made the day before to the prototype crossovers was “not good”, so we EQ’d the treble down by 1dB above 2kHz to bring it back to the design intent using software EQ on Alan’s laptop. Remember these are prototypes so nothing similar would be expected in production.

Listening:
Thank you for waiting! The “methodology” such as it was involved playing a few tracks on the Sonus Faber/Lyngdorf system to get a bit of a baseline of the room sound, and then switching to the Sointuvas. We went back and forth a lot with different tracks, just listening for interesting differences and any potential issues with the Sointuvas, then choosing tracks to bring those things out or check for comparability. Level matching was very approximate. We weren’t looking for “better or worse”, just trying to analyse tonal differences and seek out any audible distortions.

Lets’s go back to the design intent: deep bass and very low distortion in a moderately sized box. Those goals are met admirably. The Sonus Faber/Lyngdorf combination went down to 20Hz and had more energy up to 200Hz, but the Sointuvas were significantly cleaner sounding throughout their 40Hz and up range. On killer tracks where sub 40Hz content is present they were totally unfussed, and didn’t lose control in any way. On tracks where punch and slam are required they delivered. On tracks with complicated rapidly shifting bass the Sointuvas kept a good articulation of individual notes. The 4x10” room-corrected woofers in the W210s did slightly better on note-to-note articulation to my ears, but for the 2x6.5” woofers in the Sointuvas to come close is a heck of an achievement.

Tonally the Sointuvas are neutral. Like, actually neutral. Nothing stands out, no weak spots, no “look at me!” frequencies. I did not “hear details I’ve never heard before”, and that is a good thing. Personally I prefer a bit more of a lift below 200Hz, but pushing them a little closer to the back wall would probably make that happen. When we dialled that lift in via EQ the sound from 40Hz up was very close to the Lyngdorf/Sonus Faber combo. There is clearly huge headroom available for room correction at any reasonable volume levels.

Regarding the low distortion goal, you’d have to defer to measurements for “the truth”, but the Sointuvas were free of any audible harshness or hash. I could listen to them at high volumes all day. At one point I thought I could detect an issue with some kind of congestion around 400Hz while low bass was playing at the same time, but we moved the speakers by less than 10cm and the problem went away, so it was probably a room mode/reflection issue. Gamechanging? Not proven. Very good? Yes.

Compared with the usual system in the room the Sointuvas had more treble clarity but less bloom and soundstage width. This isn’t a “better/worse” thing, just a pretty obvious function of the fact that the Sonus Fabers are designed to be very “nice” while the Sointuvas are more “truthful”.

Off axis the sound was very even and enjoyable throughout the space. The reference here would be the LXMini system I have in another room, but that is a coaxial dipole above 800Hz so it’s not a fair comparison. The Sointuvas were certainly better than the Cremona Auditors when it came to vertical response consistency.

Thank you! I wish I was there too...
Radikal aktivist

These are definitely the nicest looking speakers I've seen that use those Purifi drivers, plus I love the grills -- others I've seen have been rather ugly -- so, anyway, kudos to the beautiful design.
OP
M

They do look nice. Not as nice as the Sonus Fabers, but that's an impossible standard to meet The solid hardwood cabinets should make it a closer run thing when the Sointuvas go into production. 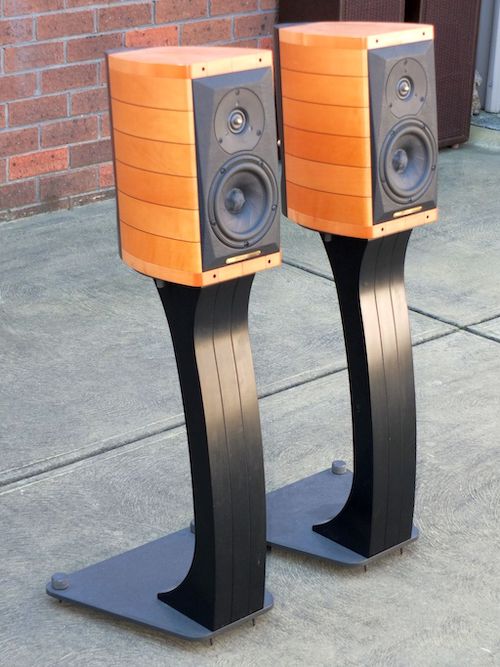 I woukd just like to publicly thank @mcdn for his hospitality the other day. It was a very interesting few hours messing around with kit. Thoroughly enjoyed hearing the LXminis and CBT. Two more radical designs that I have always thought I should get round to playing with and investigating but never seem to find the time.

Really useful to get the feedback from a fresh pair of ears, both positive and negative, to steer the design in the right direction.

Well done both of you!
P