This is a review and detailed measurements of the Marantz AV8805A Audio/Video Processor (no amplifier). It is on kind loan from a member to see how the switch to ESS DAC has impacted the performance of this processor. AV8805A costs US $4999. I previously tested the AV8805 version.

Even though the cardboard box says AV8805A, there is no such designation on the unit itself, front or back:

You all know I am not a fan of Marantz designs. The porthole display is too small causing you to flip down the panel to see what the AVR is doing. If the porthole was pretty it would be one thing but I think it is odd looking. The back panel is silliness in the extreme with gold plated obsolete video inputs such as component and composite.

Anyway, the unit came with the latest firmware (owner had tested it first) and I performed a factory reset before testing.

Marantz AV8805A Measurements
I am using a mix of Toslink and HDMI inputs for the tests so let's look at both in our dashboard: 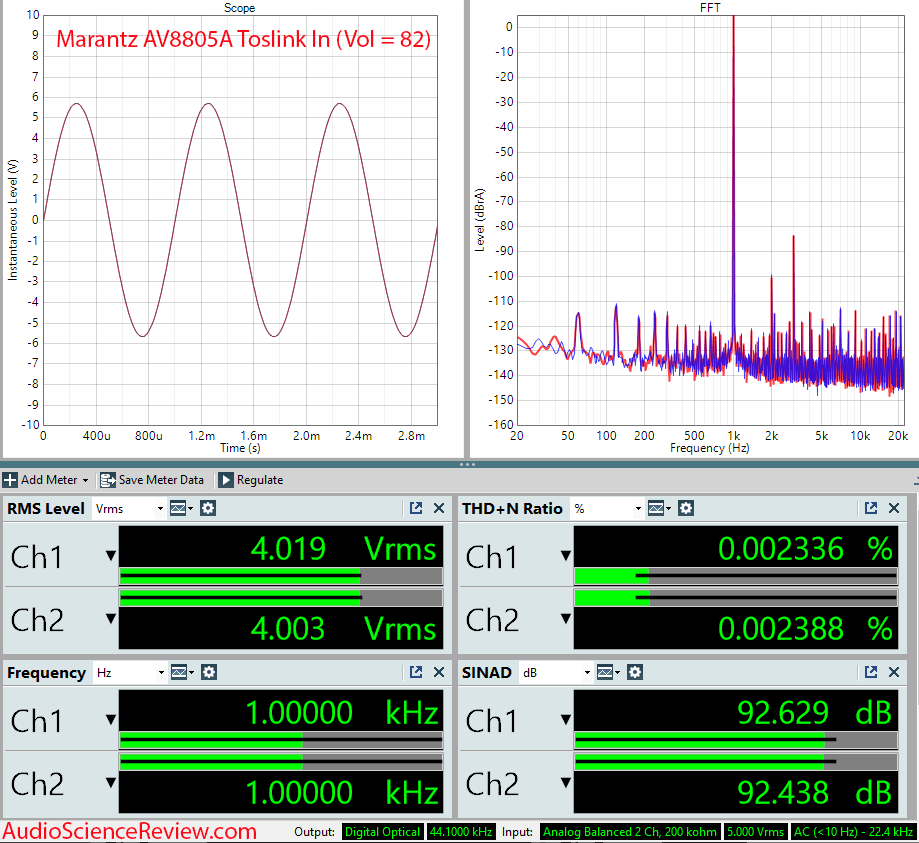 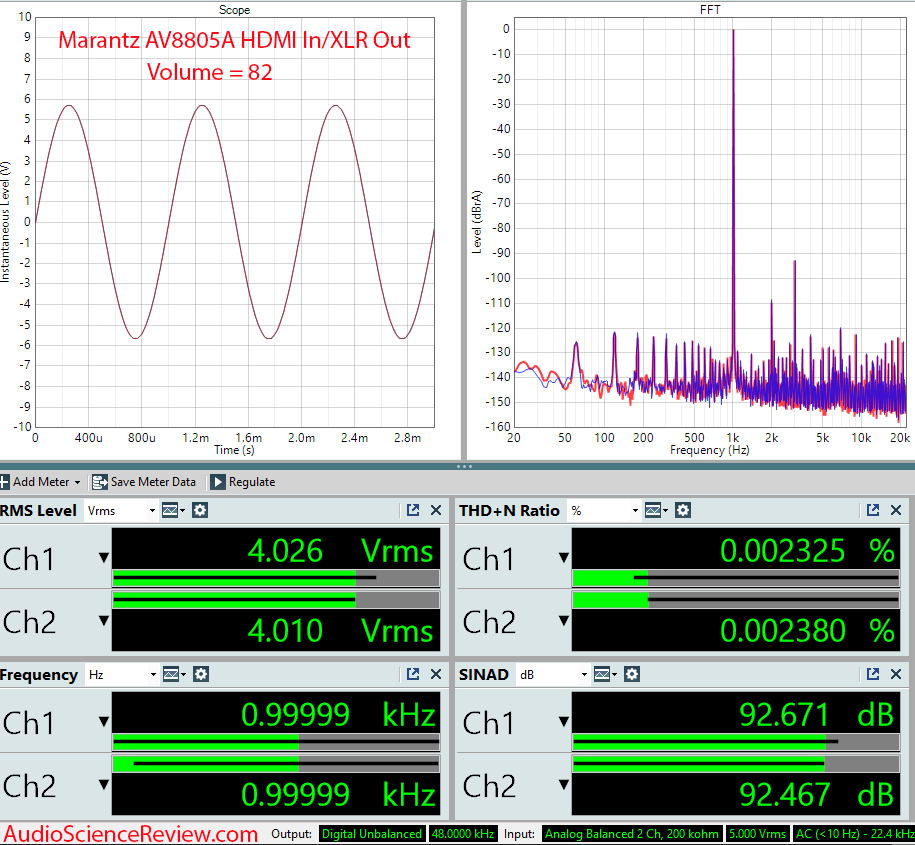 SINAD when adjusted to the same 4 volt output is a hair better than before: 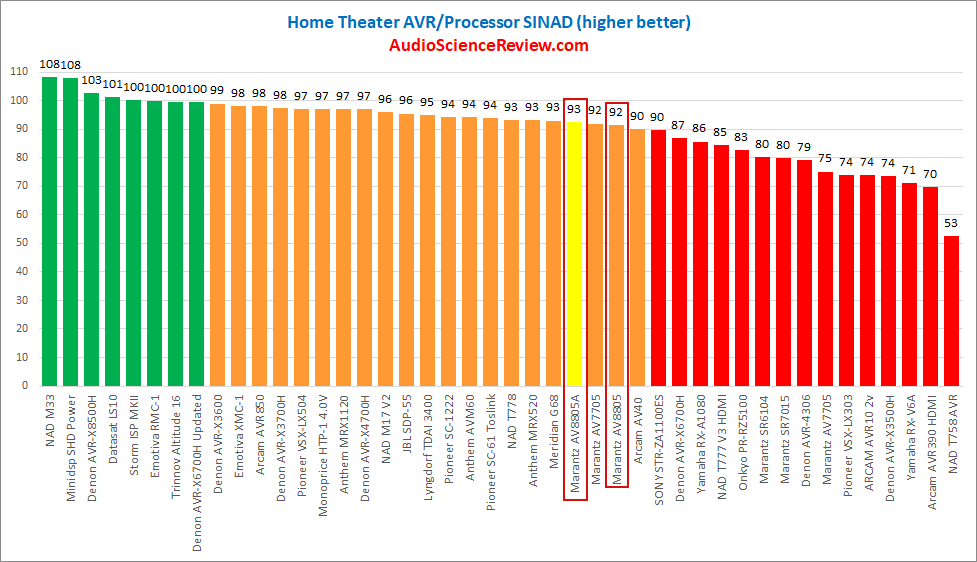 There are a lot of spurious tones however. Their levels are too low to impact SINAD due to high distortion but still, it shows lack of good engineering hygiene.

Unlike a number of other Marantz products, the top performance is reached at 4 volts output which is good: 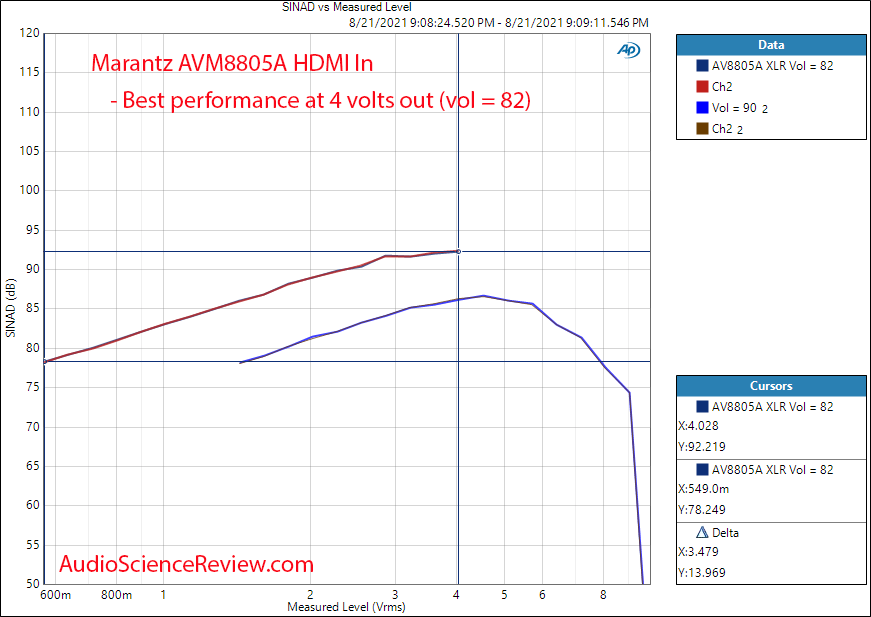 Dynamic range is 3 dB worse than before:

IMD distortion shows less saturation than with the older DACs: 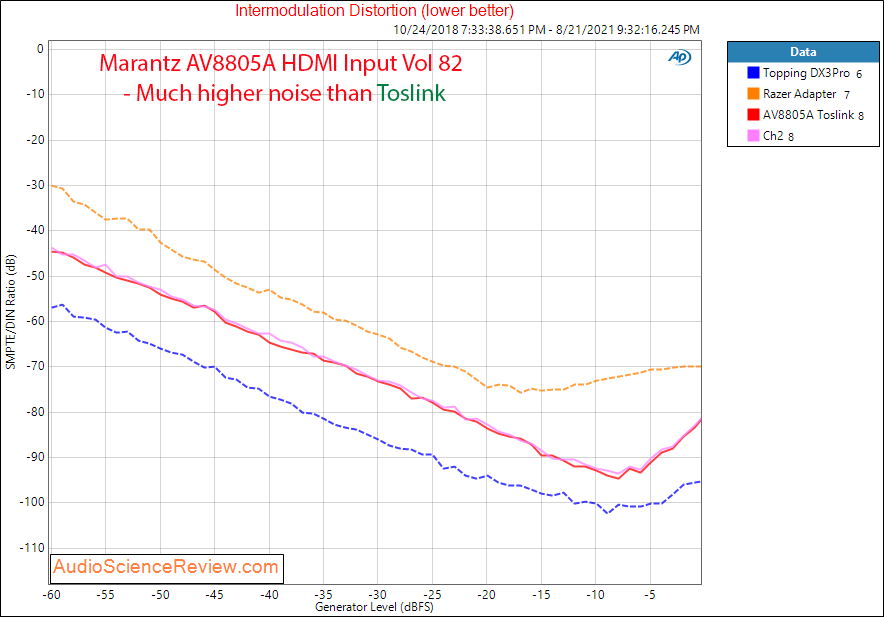 Sadly the same slow filter is used for the DAC: 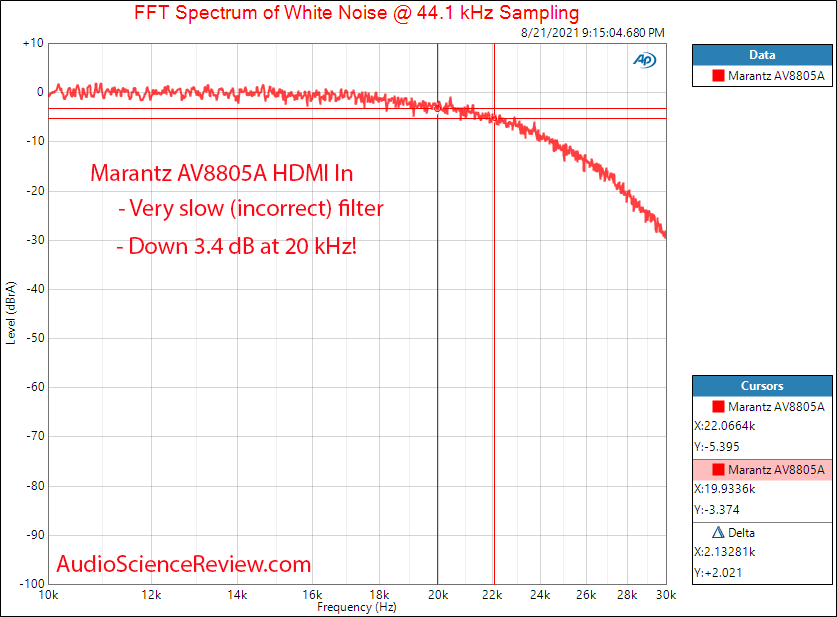 Predictably jitter spectrum is not clean: 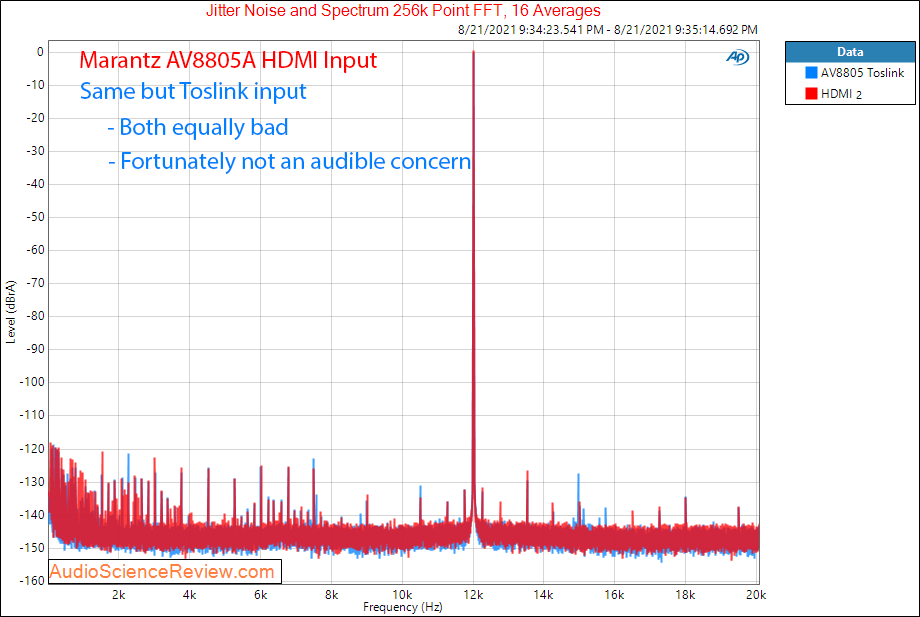 Multitone is decent likely because it has lower levels than our other test signals: 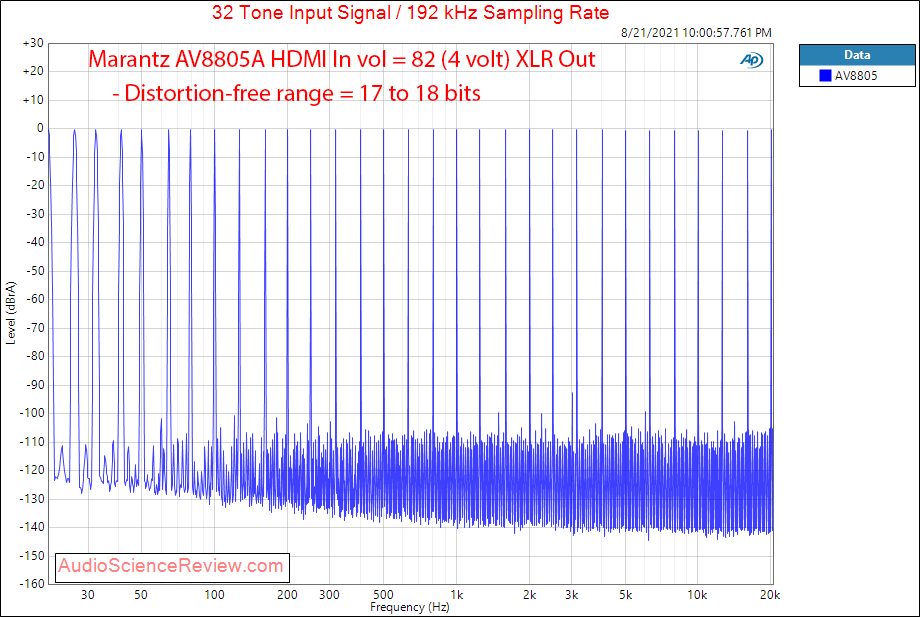 Linearity is a bit worse than before but in the same ballpark: 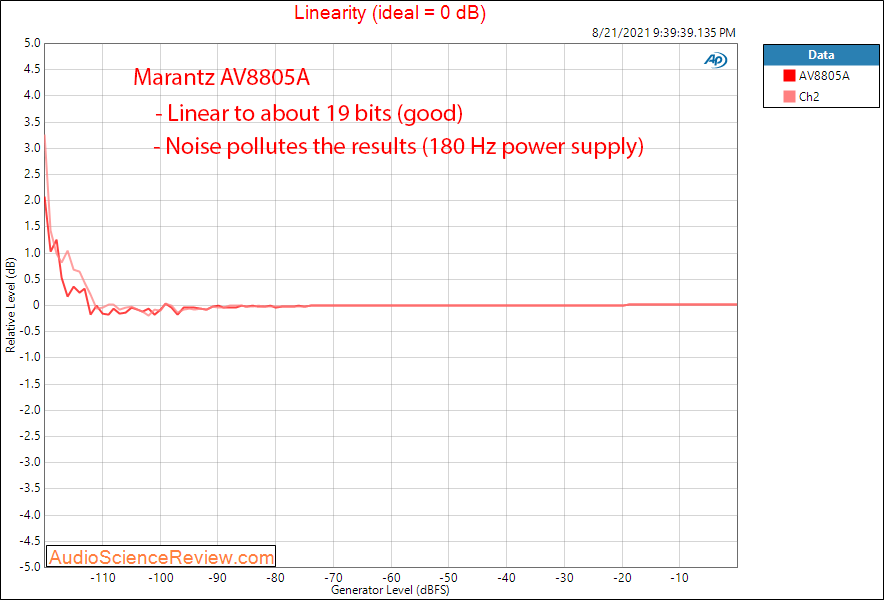 The slow filter comes to haunt the THD+N vs frequency test: 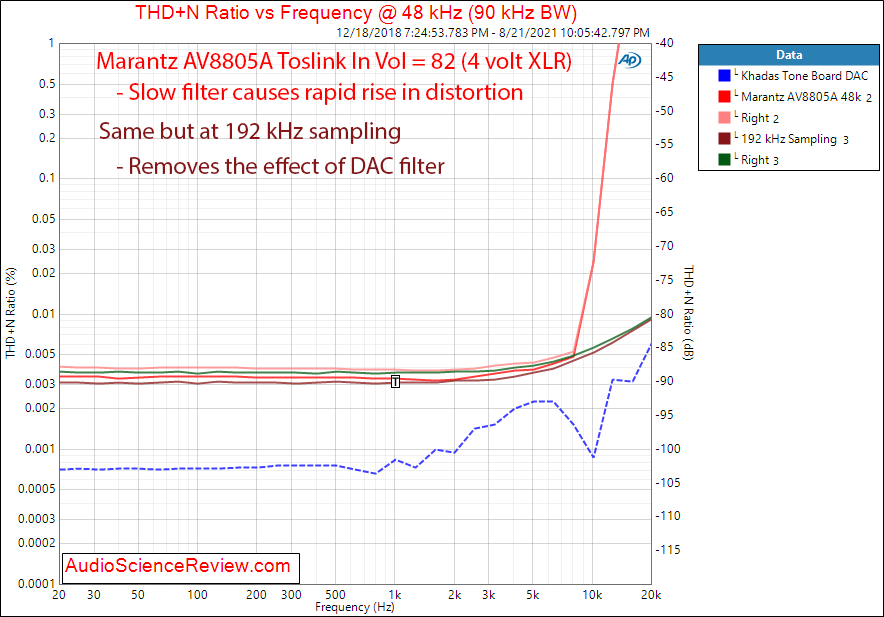 The spurious tones that should have been filtered were not causing them to sink SINAD at higher frequencies. Switching to 192 kHz removes that issue but still shows that performance is nothing to write home about being many dBs worse than our $99 reference DAC.

Conclusions
Performance here is not awful but clearly could be a lot better as sister group Denon has shown. $5,000 is a ton of money for an AV product so performance needs to be much more optimized than it is. Anyway, good news is that switch to ESS DAC from AKM has not resulted in any harm. Overall performance remains quite similar.

I should note that the owner used a camera and found the ESS DAC chip in there and D&M confirmed to me that the "A" designation means it uses the updated ESS DAC chips.
Amir
Founder, Audio Science Review
Founder, Madrona Digital
Contributing Editor, Widescreen Review Magazine
Click for My Technical Background
My YouTube Channel 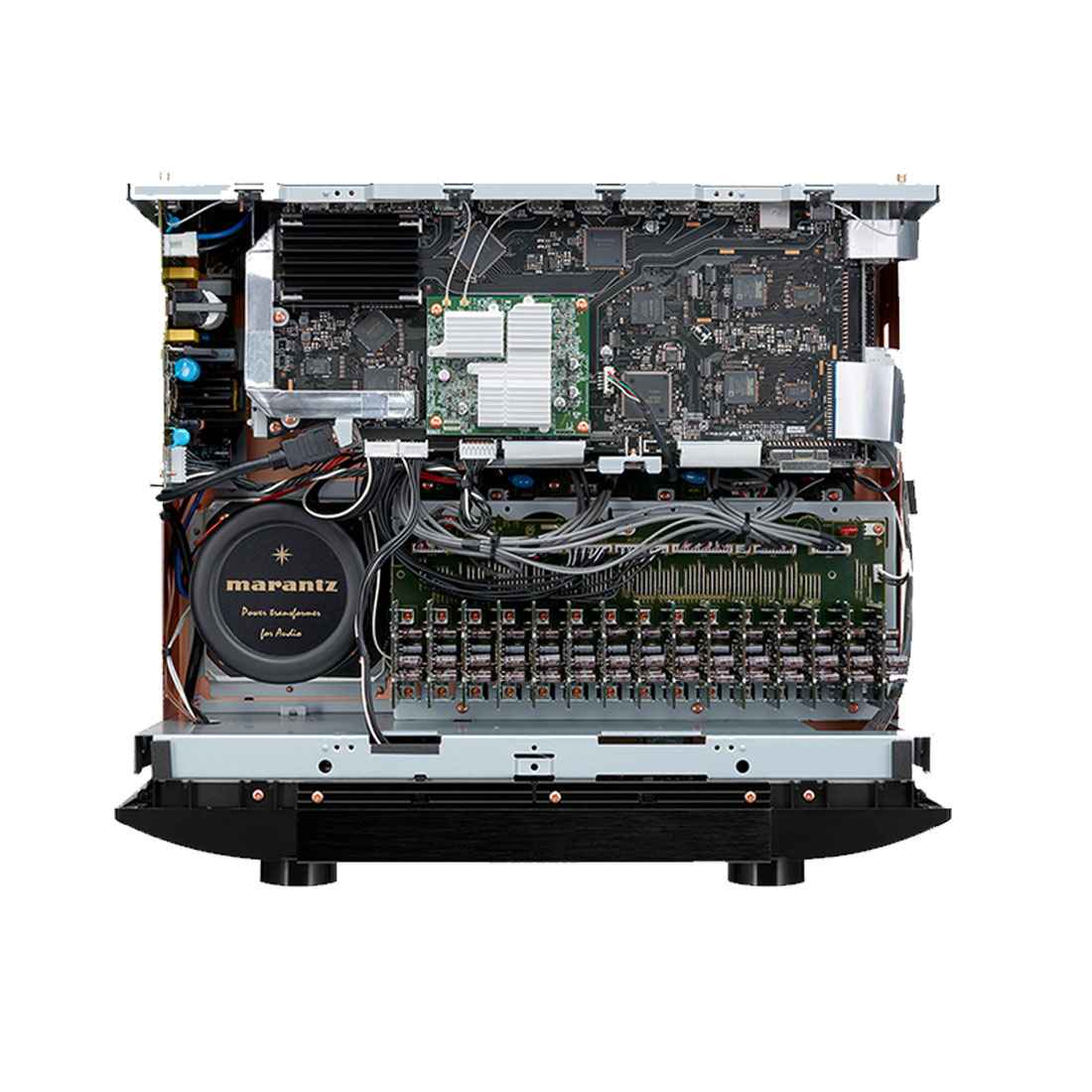 Pics of the HDAM circuitry galore. 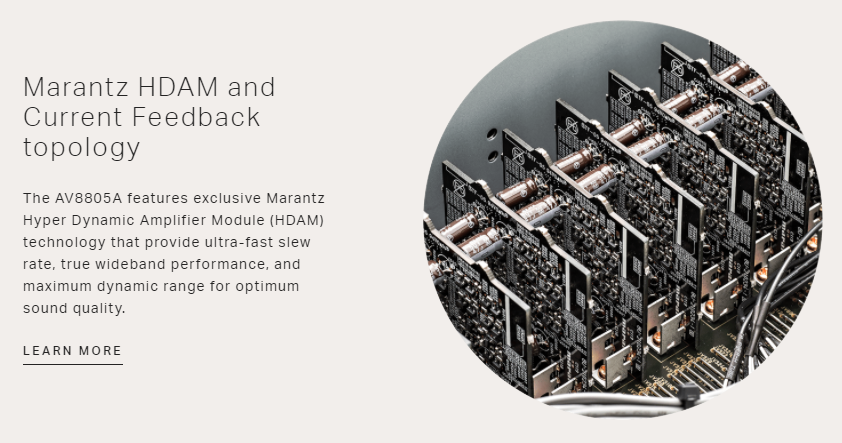 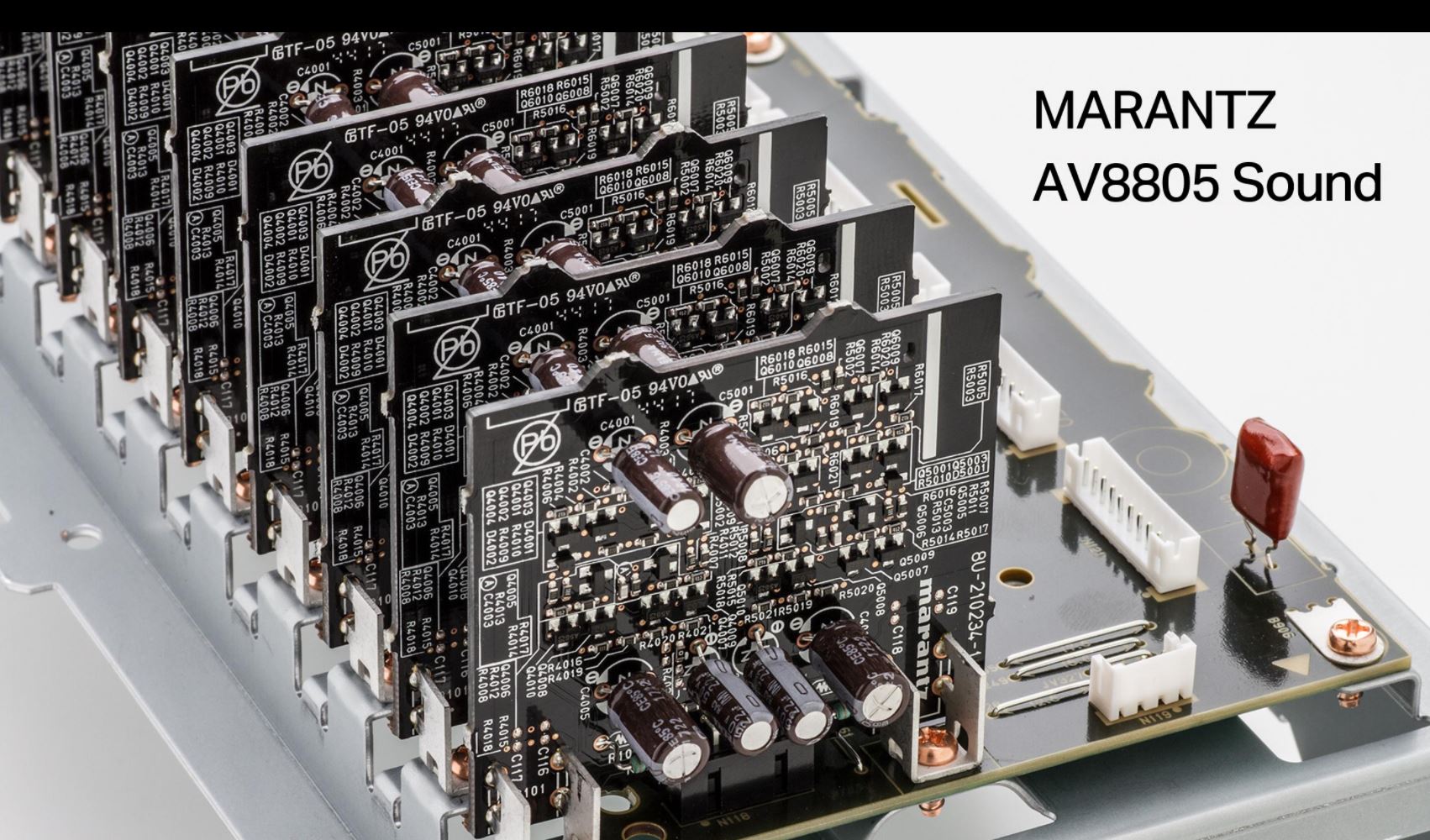 Thanks. Looks like their name doesn't mean as much as it used to, as it appears to be all for show. So glad I went with the Denon.
R

amirm said:
... $5,000 is a ton of money for an AV product so performance needs to be much more optimized than it is.
Click to expand...

Especially, considering that the Denon AVR-X6700H measures better, at 50% of the cost and being a "complete" AVR...
R

In Germany some would say "what a beautiful graveyard of parts" (and money...)
R

GWolfman said:
Thanks. Looks like their name doesn't mean as much as it used to, as it appears to be all for show. So glad I went with the Denon.
Click to expand...

They want to keep their line apart (as the design shows already), but doing so at the expense of performance is the wrong way IMHO.

respice finem said:
In Germany some would say "what a beautiful graveyard of parts" (and money...)
Click to expand...

How would you say this in German?

But the auto translation is OK already. I'm using it often to translate long (and largely irrelevant) text pieces, quite usable, even for languages like Polish. Too lazy to translate them manually, ich bin ein fauler Sack
Last edited: Aug 22, 2021

So is this recommended or not? The non-A had the lying down panther, while this one has the undecided but notionally measures the same....
OP

I measured the non-A before I measured a ton of Denon AVRs that do so well. As a result, I knocked the rating down to "I don't know."
Amir
Founder, Audio Science Review
Founder, Madrona Digital
Contributing Editor, Widescreen Review Magazine
Click for My Technical Background
My YouTube Channel

Understood. I can't help but think D&M should sack off the Marantz engineers and let the Denon team do all the AVPs instead.
R

Depending on the "merger" conditions, it may be feasible or not. And, an alternative way of differentiating the lines would be called for, which isn't easy, I guess. My idea would be, for an AV preamp, a sleek flat box, all digital, AES-EBU out for a fully active setup, instead of having composite video inputs and such in a huge and half-empty cabinet... Alternatively. switchable digital / analog out for legacy systems.
Last edited: Aug 22, 2021

Audiophiles and home theater enthusiasts will be eye-opended. Thank you Amir.
M

I suspect that is the very same engineering team, just working to a “different” set of requirements to differentiate this brand, driven by marketing.

Does the Marantz have an AP analyzer ? I mean is it an industry standard to have just around 90dB Sinad?

Marantz expects the system to be measured independently? ASR forum opens eyes of many home enthusiasts. Me included. I will buy a Denon receiver instead.
Last edited: Aug 22, 2021
OP

DACs_Lover said:
Marantz expects the system to be measured independently?
Click to expand...

amirm said:
Clearly not until recently. Hopefully things are changing as they see we are not going anywhere.
Click to expand...

Amir, is it possible to have a AV processor as good as decent topping DAC? Why a Denon receiver with a cheaper price tag can have a better measurement?

Dealers / Youtubers those that were recommending this unit over a Denon receiver are lying to us. They claim to have golden ears.

Could European models (230V) measure differently? Assuming @amirm measured a model with 110V AC input. Probably it shouldn't make any difference but as it seems there are problems with engineering here so maybe even that could make a difference in their technical implementation.
T

Mr YouTuber’s aim is to steer you towards to a purchase decision. Buy something, anything. Just buy it.

it’s like when you go to shop for clothes. Does the sales assistant ever tell you “god that looks terrible on you?” Lose a few pounds?” Or “get the bigger size?”

it really doesn’t matter; because the earnings are through the affiliate links, and number of views and the number of subscribers; it earns them a passive income.

all the clever engineers left audio decades ago (or retired) and went to do more interesting things like video displays, software, robotics or AI…
Last edited: Aug 22, 2021
You must log in or register to reply here.

Yesterday at 1:01 AM
rickyhgarcia
R

R
Help me find my next AVR/Processor