amirm said:
Had a private request to measure the RCA output at full 2 volts and reduced 1.4 volt. Here they are:

I have another processor to test so please don't ask me for more measurements of this one.
Click to expand...

peng said:
The PM800X have different versions of HDAM. Also, those HDAMs in the PM series are actually doing something as they are not just an extra unity gain buffer added behind the volume control IC right at the end of the signal path. /QUOTE]

That's what I was thinking/hoping. I own a PM8006 and have to say I'm really quite happy with it. I would send it in for review, but I'm living in Germany... Would also be interesting to see measurements of a NR1710/11, as those slim line AVR should have a different architecture.....
Click to expand...

sarumbear said:
First, I said more than a dozen brands tested here, not seven, nor what is available in the market. Do please read before you disagree. Finally, are you really saying that there are 700 Hi-Fi brands on the market competing with each other?
Click to expand...

A dozen or seven makes no difference. In terms of affordable options there are around 7 anyway if you take into account parent companies. And yes I am saying hundreds of brands are competing for other types of components. You can design a dac today and sell some. Same for amplifiers or speakers.

Want to design and sell your own home cinema surround processor? Good luck getting even started. First thing you need to do it get licensed for Dolby and DTS. That is a very high barrier to entry. Then you need to have the technical know how to program the actual firmware on the machine. Which goes beyond even DSP controlled stereo amplifiers because you have much more to deal with including video support.
"Human beings are poor examiners, subject to superstition, bias, prejudice and a profound tendency to see what they want to see rather than what is really there." - M. Scott Peck

"Man does not see reality as it is, but only as he perceives it, and his perception may be mistaken or biased." - Rudolf Dreikurs
D

Blumlein 88 said:
I used to think that. But that isn't it. Pro gear can have much higher density and channels than AVR and the best of it is very good measurement-wise. So it could be possible to make an AVR that has great numbers, and my guess is other than bothering to make it a goal the cost vs what they have would be somewhere from minimally higher to perhaps not at all higher.

Take Marantz's insistence on the HDAM. It isn't particularly great, they make it with quite a few discrete transistor circuits. My guess is they could make an all IC version 20 db better in every metric and far cheaper. Why don't they do it? I don't know.
Click to expand...

I think you'll find buyers make decisions more on features than sound. If that's their preference, why do you think sound should be more prioritized?
Sony Walkman > 3.5 mm headphone out > Amazon basics cable > Little Bear amplifier for that tubey distortion > Aeon RT closed

sarumbear said:
Curious, what source(s) do you use that only has composite video output?
Click to expand...

SNES being one off the top of by head.
P

I didn't see any major difference between the two tested except in linearity as you pointed out but that's a difference of 2 bit, not a huge deal.
The difference in preamp/DAC SINAD is negligible if you compare them at the same output voltage level, both managed about 74 to 75 dB.
P

peng said:
I didn't see any major difference between the two tested except in linearity as you pointed out but that's a difference of 2 bit, not a huge deal.
The difference in preamp/DAC SINAD is negligible if you compare them at the same output voltage level, both managed about 74 to 75 dB.
Click to expand... 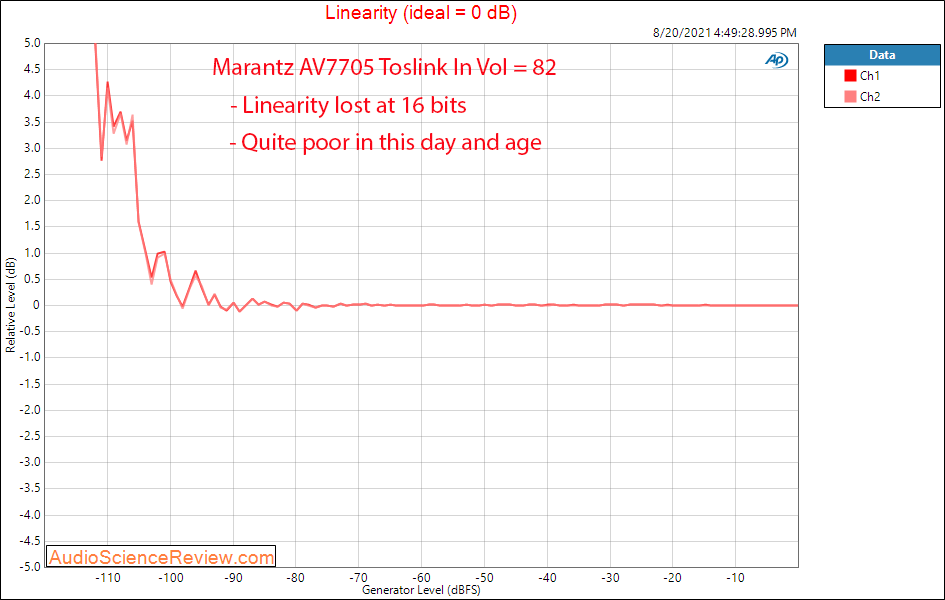 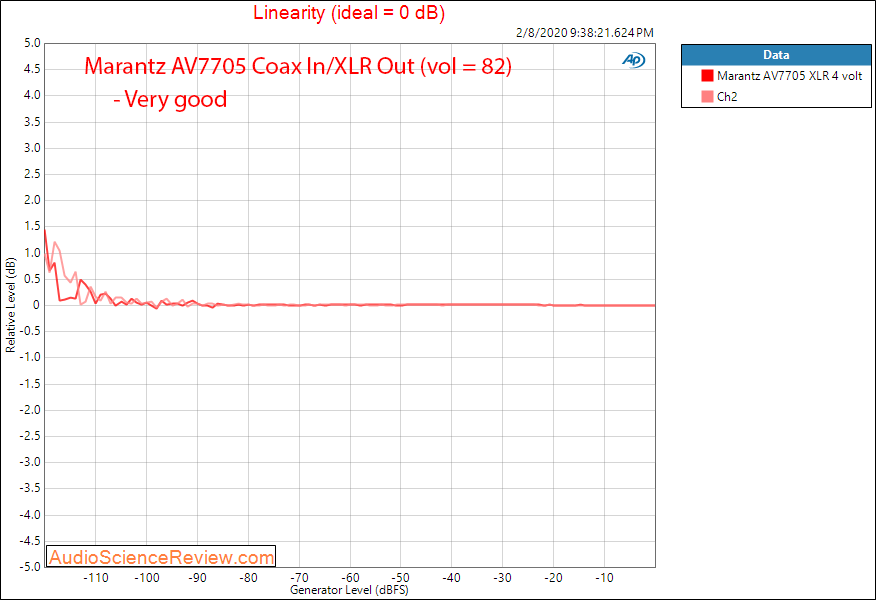 From the above charts, one can conclude that the SP-DIF coax input signal (from Amir's first benchtest in 2020) is superior to the Toslink (optical) connection from this most recent August 2021 benchtest.
P

Martin_320 said:
From the above charts, one can conclude that the SP-DIF coax input signal (from Amir's first benchtest in 2020) is superior to the Toslink (optical) connection from this most recent August 2021 benchtest.
Click to expand...

He said almost 20 dB difference so that confused me a little. Now I see what he's saying, it looks like the it's a case of 16 bit vs 18 bits. I don't know how significant that is in practical sense. I noticed at least a few other AVP such as Monolith HTP-1 and Emotiva XMC-1 did do that well either. Though one would think between the two samples of the AV7705, the difference shouldn't be that much, but again, practically speaking it most likely won't make a difference. At least the preamp/DAC SINADs are consistent for the two.
M

They sounds very similar for pop and classical songs, playing up to 98dBC peak at 11ft listening distance.
B

They sounds very similar for pop and classical songs, playing up to 98dBC peak at 11ft listening distance.
Click to expand...

The AV7706 measures about the same as the AV7705. This is to be expected as little has changed between the two models. Unfortunately the HDAM's haven't been upgraded with currents sources as is seen in the SR8015. The current sources are still resistor-based. This restricts "reasonably" good performance to a maximum from the XLR outputs of about 2.4V RMS.

The AV7706 offers better distortion performance if the digital input is restricted to about -4dBFS and below, that is -5dBFS, etc. The X6700H for example, doesn't work this way.

This effect can be seen using three scenarios:

Internally the AV7706 outputs 2V from the DAC IC/filter circuit. The volume control is set at -6dB internally. This outputs 1V to the + output, the - output is thus -1V and the overall outputs is 2V.

#2: -6dBFS input and setting the volume control 6dB higher to again reach 2V from the XLR.

Internally the AV7706 outputs 1V from the DAC IC/filter circuit at -6dBFS. The volume control is set at 0dB internally. This outputs 1V to the + output, the - output is thus -1V and the overall outputs is 2V.

#3: 0dBFS input to say the left channel with that channel set at -6dBFS in the channel offsets. Volume control set as in #2 above, that is +6dB vs. #1.

Internally in the AV7706, the left channel input is 0dBFS. This is offset -6dB to -6dBFS. The output is thus 1V from the DAC IC/filter circuit. The volume control is set at 0dB internally. This outputs 1V to the + output, the - output is thus -1V and the overall outputs is 2V.

Channel offsets in the AV7706, and other Denon/Marantz AVR's and AVP's using Audyssey are often -4dB and less. These lower digital input levels in practice may be improving the THD performance in practice in the AV7706.


On possible reason for this worse performance at digital input levels approaching 0dBFS is that the distortion of the AKM AK4458 DAC IC increases levels close to 0dBFS. Of course the X6700H also uses the AK4458 (or did, another story), but perhaps there is a difference in how the X6700H adjusts digital input level behind the scenes.

The attached file is the distortion performance of the AK4458 vs. input level from the AK4458 Evaluation Board manual


An alternative explanation to the above is that the DAC IC/filter circuit has higher distortion in the AV7706 than in the X6700H. The X6700H and Marantz SR8015 AVR's, and some other Denon AVR's, have current sources that feed the NJM8080 opamps in the DAC filter circuit such that the opamp is operated in Class A. The AV7706, and AV770X series in general, do not have these current sources.

It may be possible that these current sources cause the opamps in the DAC filter circuit in the X6700H and other recent Denon units to operate with significantly lower distortion in the 1V to 2V output range than in the AV7706.