fieldcar said:
I like the soap dispenser style input selector. 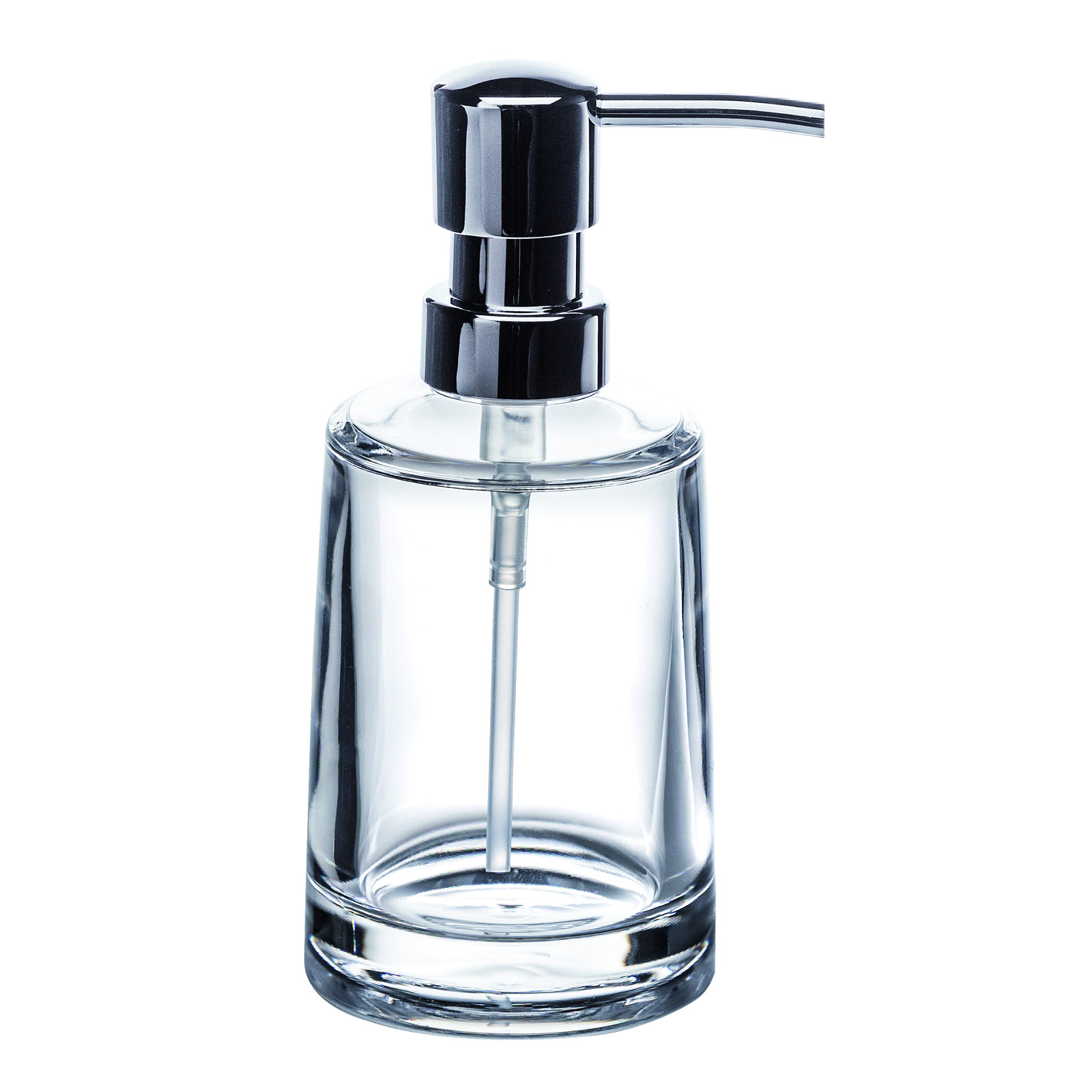 Need it to clean out yer earholes after you listen to all that distortion . I don't even like distortion in cheap car audio stuff. Not sure why people like it in really high end audio where its supposed to be about "fidelity."

They do have aesthetics going for them, though. I did buy a cheap FX Audio Tube 02 headphone amp some time back just for the hell of it. Implementation was just some faux 5725W pentodes parked across the +/-12V rails as the input for the "flavor" and an op-amp + emitter-follower stages for driving the headphones if I recall. And after all that it still ended up being transparent with its distortion products more than 50 dB below the fundamental even at low impedances. I was quite disappointed, ironically. To add some ironic insult Amir tested one and his had audible distortion. So much for remembering that tube sound, which I probably would have promptly wanted to forget if it did have distortion out of the box. At any rate, it still made for an ok headphone amp.

levimax said:
Do you really think that this amp with all the PS noise and distortion would sound "better" to anyone than a competently designed hybrid tube amp which should be able to achieve a SINAD of 70 or more quite easily? The only tube amps I have used are "vintage" so they perform much better than modern tube amps like this. To me I can't tell the difference between a decent tube amp and a SS amp.
Click to expand...

Even tube amp enthusiasts are split into 2 camps. The flea watt amps like this one are gonna struggle tested at 5w. to me these things are like bonsai trees where they have to be perfectly matched to the right speaker and can “arguably” deliver delicious tiny little apples. It was kind of an art back in the day to coax them into sounding good.

Mojo Warrior said:
This review of a competently designed and built tube amp clearly demonstrates why the electronics industry overwhelmingly embraced transistor technology, because it was far superior to vacuum tubes.

So much for nostalgia and so called "golden ears audiophiles"..
Click to expand...

I don’t have golden ears and get my tube amp setup is not gonna measure like my listening room. This piece of gear is fine if you got $3k to throw around. Just wish it was a bit better. Cause valve Amps are cool like old cars.
A

Ahhh…the perils of voltage controlled currents! It is unbelievable how people spend serious money to achieve lower performance and lower amplifying power. It is, imho, like spending more to buy a book where highlighters and bold print pepper the pages to make the reading more exciting and the experience in some way different from the one relaying on un-distorted source.

Just for giggles, I put my Dynaco SCA-35 power amp section which I built into the chassis below on my bench. This amplifier uses the same output tubes as the Luxman and can do 17 watts per channel. I set up my 'dashboard' and the results are below. This half-century-old Dynaco beats the Luxman at the same measurement conditions. The THD is 0.08145% and the THD+N is 0.11096% - easily beating the far more expensive Luxman. You can see that there is still a strong 2nd order harmonic distortion present in this amp where ideally there should be very little, but it still beats the Luxman. 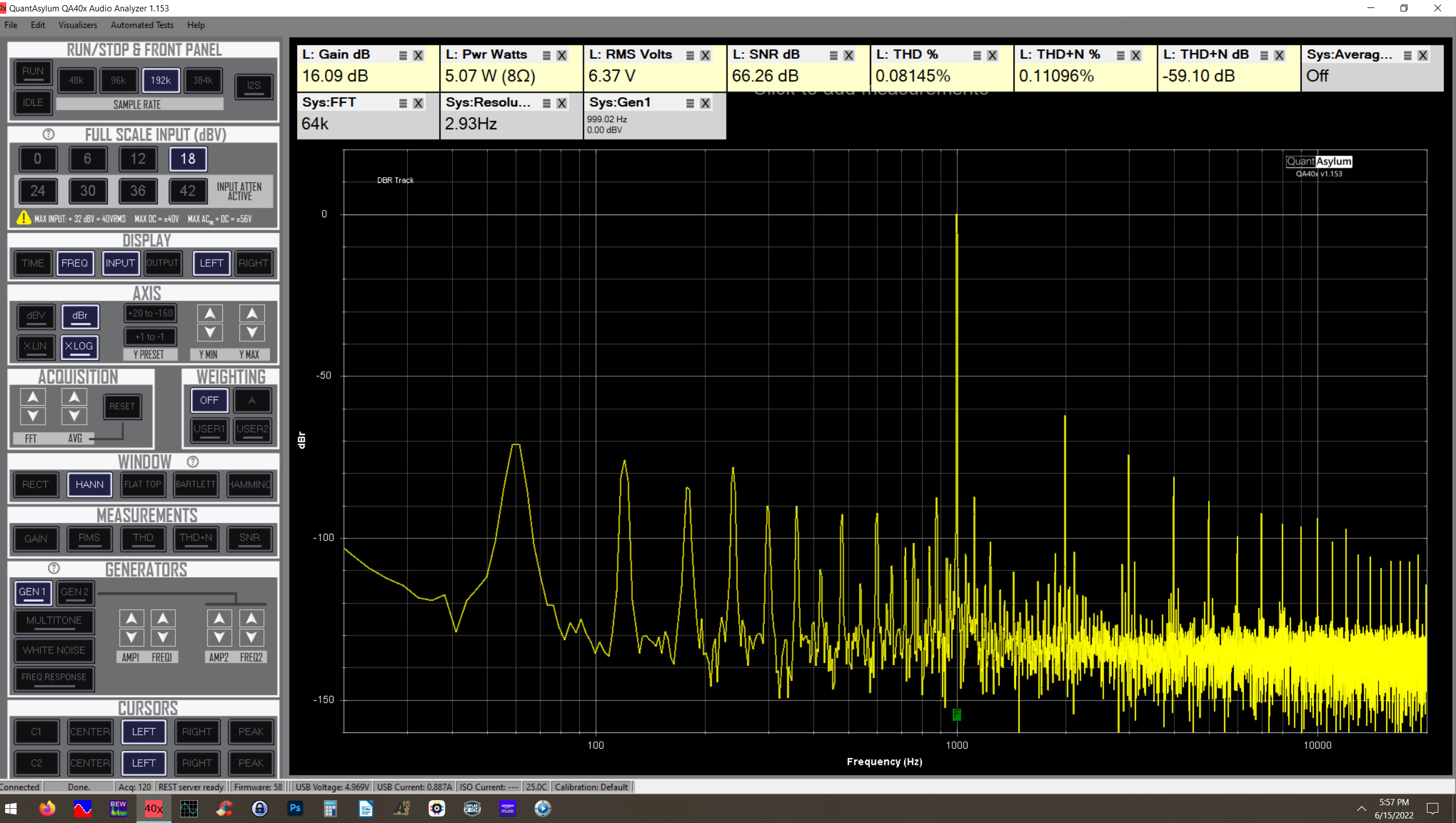 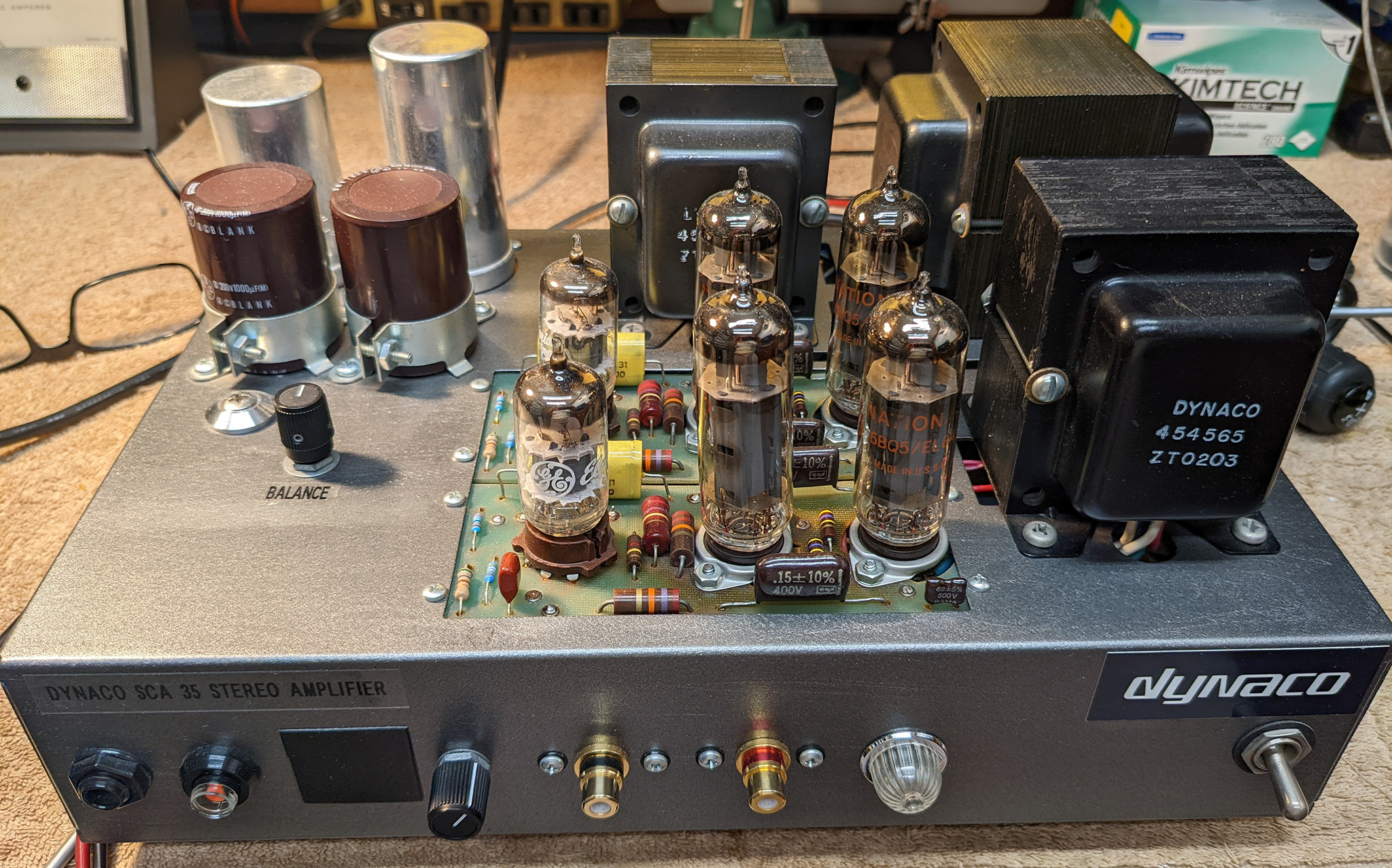 Electronics hardware and software design engineer for a leading manufacturer of high end audio power amplifiers and preamp/processors for home and professional cinema use. We manufacture our own branded product lines and are a large ODM/OEM manufacturer.
J

Do tube amps ever get electrical certifications?

SKBubba said:
Bet it sounds great playing Dark Side of the Moon on Klipschorns in the, uh, "right" frame of mind.
Click to expand...

In one of my systems I currently have set up a little Chinese integrated amp, not unlike this in spirit: 6V6 push pull/6SL7 pre (10-12-16 watts/ch depending on the distortion you need/want) driving La Scala II loudspeakers. Using line level DAC input, and with the volume control at 8 o'clock, it's about as loud as you probably want to listen. At position 9 it will be almost too loud. But the sound is 'clean' regardless of level.

So you don't need much beef if your speakers are sensitive enough.


amirm said:
It is the classic case of paying a lot more and getting 1) a lot less fidelity and 2) enjoyment.
Click to expand...

I think the first point is objectively correct, but the second point is an open question, and depends. My guess is that anyone who buys this thing probably knows what they are in it for, from the get-go, but will nevertheless be happy. Alternately, anyone who is not inclined to purchase something like this (because they know what they would be in it for) is not going to obtain much enjoyment from the device.

FWIW I've swapped out a SOA SS amplifier for a couple of different tube amps, and thought I heard differences. Sometimes I preferred one to the other, but after a day or so I got used to each's sound (if indeed they sounded different and it was not my imagination) and moved on. Of course all my loudspeakers are of the 'easy to drive' variety. With power hungry and low sensitivity speakers YMMV.

A final thought... against the Luxman, if I was going to get another low powered tube amp, and wanted a similar form factor, I'd probably go the DIY route. Something like the little Elekit from Japan. You won't get all the features of the Lux, but you will get the satisfaction of building something, and saving more than a few dollars. Every now and then I run across a man who insists on cutting his lawn with a manual push reel lawn mower. They can be kind of righteous about it. So be it.
And there is that group that likes to shoot black powder old timey rifles. These Luxman integrateds are popular with the Amish. You see them advertised in Amish Ways Magazine 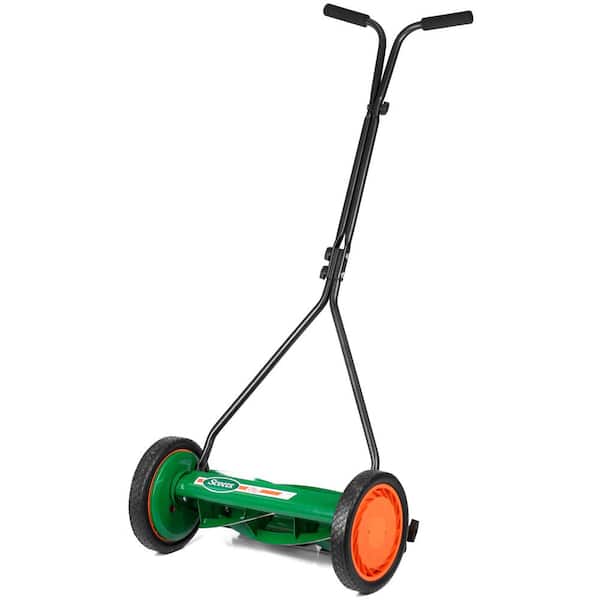 I can't get past it being 12 WPC with 1 percent distortion, no matter how pretty it looks.

Maybe if someone wants that drop dead gorgeous Japanese design aesthetic and are willing to pay for it, they should look into an Accuphase instead.

juliangst said:
I gave it the 'not terrible' rating because it's not broken. It's just how most tube amps perform and If someone wants to spend money on this I won't stop him.
Needless to say that objective performance is absolutly terrible and even 100€ amps like the new SMSL DA-6 give units like this a run for it's money.
Click to expand...

Without question it will have reviews lauding an 'organic, musical warmth', yada yada.

Tubes and vinyl are basically fetishism.

levimax said:
@SIY has designed and knows of some very good performing tube amps... maybe he can answer
Click to expand...

where's my friend @SIY at ??? with thoughts and opinions

MacCali said:
where's my friend @SIY at ??? with thoughts and opinions
Click to expand...

I have no expertise in the various commercial options available at the moment. I can talk about circuits and topologies all day, though!

I think Pete Millett is still selling versions of his Engineer’s Amp, which is a very good design. But it requires building skills, which not everyone has.
“"If I have been able to see further, it is because I have been surrounded by midgets"
- Murray Gell-Man

Best coffee on the planet
L

I am not a tube fan that is for sure. But when I read a review of this amp on Stereophile that calls it relatively quiet with a S/N level of 82 dB in the audible band I have to question some of the measurements you do ranking it at the bottom of you chart?

That and doing listening tests with the Infinity 253 - c'mon anyone knows you need a more efficient speaker dealing with a 10 watt amp rather than making comments about where the volume control was for your preferred listening level.

Folks that buy this amp are not interested in a Topping PA5 either. It sells because it is Luxman and looks the part.

it's easy to see why this scores bad, they are pushing those EL84's far beyond their confortzone. EL84 in push pull should be 6 to 8w max output to be low distortion. So they are probally running the tubes to the maximum rated voltage which is asking for high distortion.

But is it not good that tube amps are bad, expensive and have little power? Isn't that the thing with a tube amp? Having a lot of distortion to color the sound?
If it's a cup of tea that you like, that is. A lot of the bad then becomes good, right?

Edit:
Aren't there cheap plug-ins you can buy and connect to an otherwise good amplifier to color, distort the sound? Wouldn't it be cheaper? An Aiyima A07 with a cheap tube amp distortion plug in gadget that colored the sound.
Last edited: Jun 16, 2022
J

amirm said:
If an audio reviewer can't hear this level of distortion, they should give up testing audio gear.
Click to expand...

LOL
The Infinity is a 3-way floor-standing speaker. What if instead connected to a small 2-way speaker, such as B&W, Wharfedale, Dali or similar? The bass boost could be more fitting in such a context.
D

Waxx said:
it's easy to see why this scores bad, they are pushing those EL84's far beyond their confortzone. EL84 in push pull should be 6 to 8w max output to be low distortion. So they are probally running the tubes to the maximum rated voltage which is asking for high distortion.
Click to expand...

6BQ5 amps can very comfortably run 15 WPC while keeping distortion far lower than this. I've built a few, @SIY has built many of them, and there are a good number of commercial designs that do it as well, with the ST35 being one of the better known (but not necessarily highest performing) examples.


My biggest issue here is that $3300 is really a lot to ask for a stereo 6BQ5 amplifier, and it isn't a great implementation of one either.
You must log in or register to reply here.