This is a review and detailed measurements of the JBL 104 Powered Monitor (speaker). I purchased this recently for just US $90 including free shipping from Amazon. JBL shows the list price as US $129.

These are hefty, egg-shaped speakers: 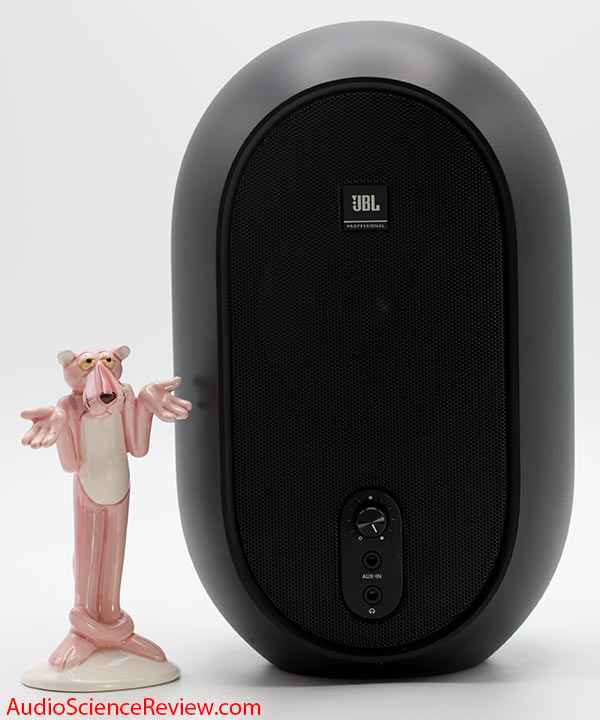 That's the master speaker that houses the amplifiers for both channels. Here is its back panel: 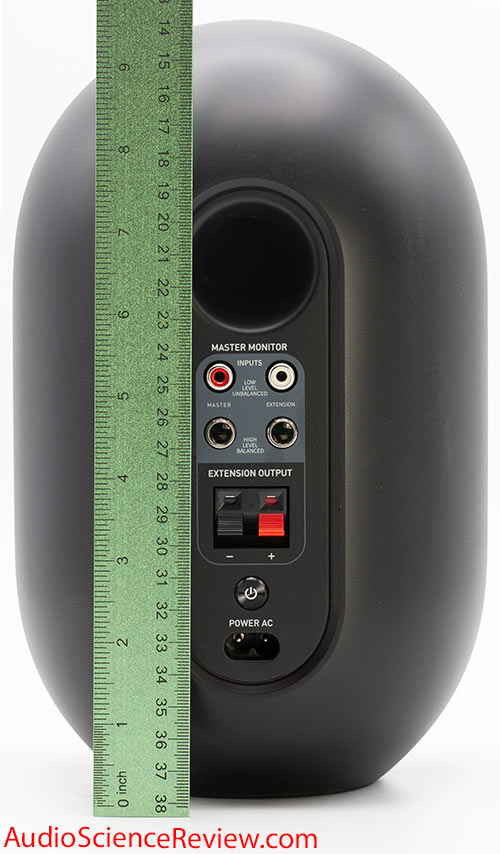 By computer speaker standards, they are a bit large. Compared to a JBL LSR305P Mark ii, they are quite a bit smaller.

They feel quite solid for something so cheap. Really, hard to imagine you are getting a brand name speaker with dual power amplifiers shipped to you for just $89. But do they sound good? Let's measure and find out.

Passive Speaker Measurements
Thinking there is just a passive crossover, I would just power the slave unit with my own amplifier. That way, I can set the voltage to it exactly to 2.83 volts as the CEA-2034 standard stipulates. So I did and ran the full suite of measurements. These are the spinorama measurements: 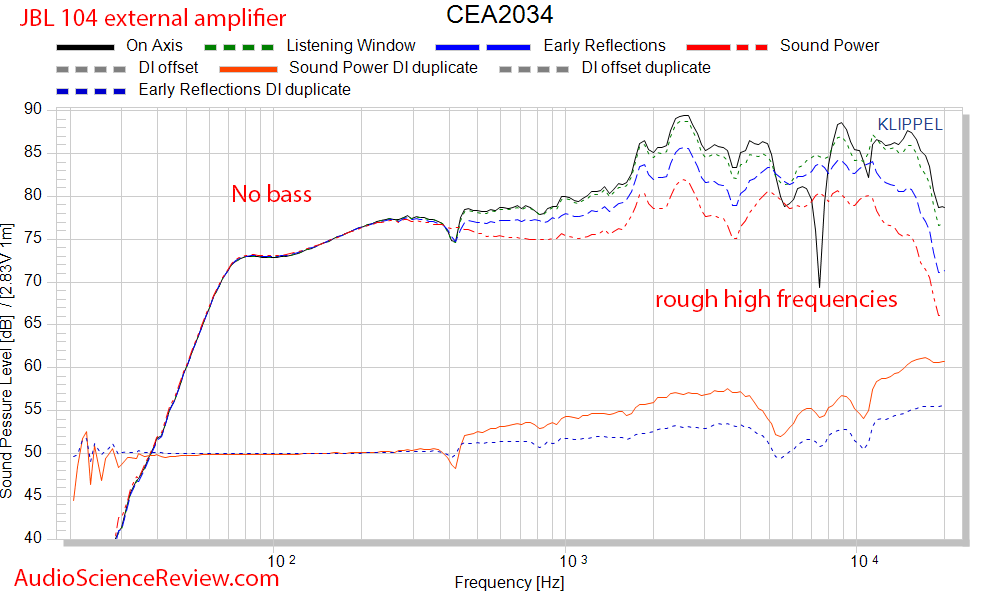 Boy, this is a disaster. No bass. No low mids. And highly irregular highs. I set one up to compare to the JBL 305 and my listening results don't match anything like this. I play clip after clip and it just doesn't jive with the measurements. It then occurred to me that the amplifier in the master unit may have an EQ it applies to what it feeds the drivers. So I measured it all over again which I now mark as the "104 active monitor."

Active Speaker Measurements
CEA2034 stipulates that you have to set the levels this way:

I can't go to 1 meter let alone 2 meters. So I set the level at 1/3 meter which translates into 95 dB. When I played this, it sounded a lot louder than I remembered the passive speaker levels. I don't know how they arrived at this being the equivalent level as the 2.83 volt SPL depends on speaker sensitivity and this one does not (since it is a measured value). Anyway, measurements are done and this is what I got: 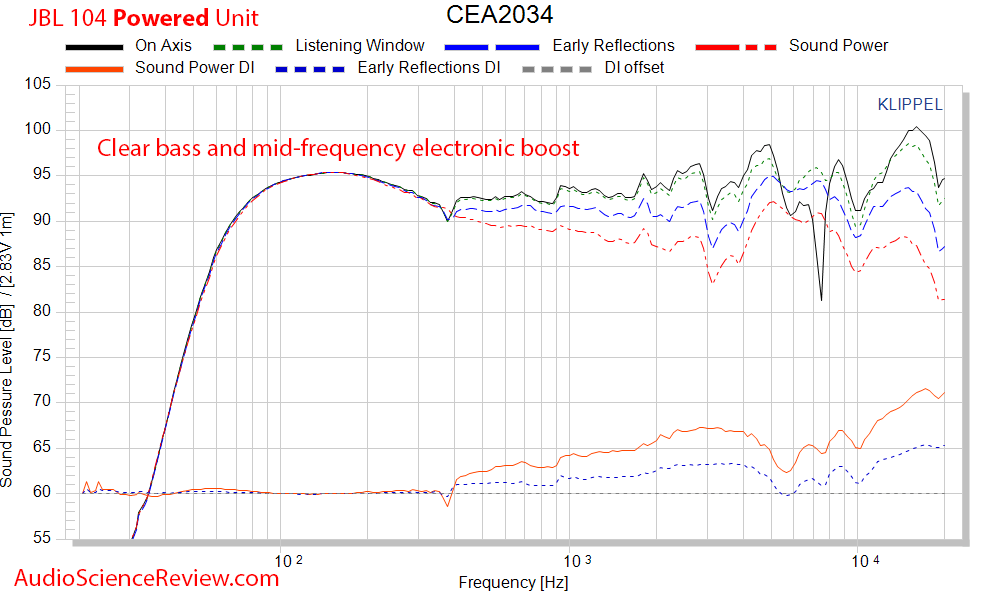 Check out that big boos! Not only does it push up the bass but also good bit of the response to about 1.7 kHz where the crossover is. We have an on-axis cancellation around 7.4 kHz or so. A deep dive into polar plot near that frequency shows the problem: 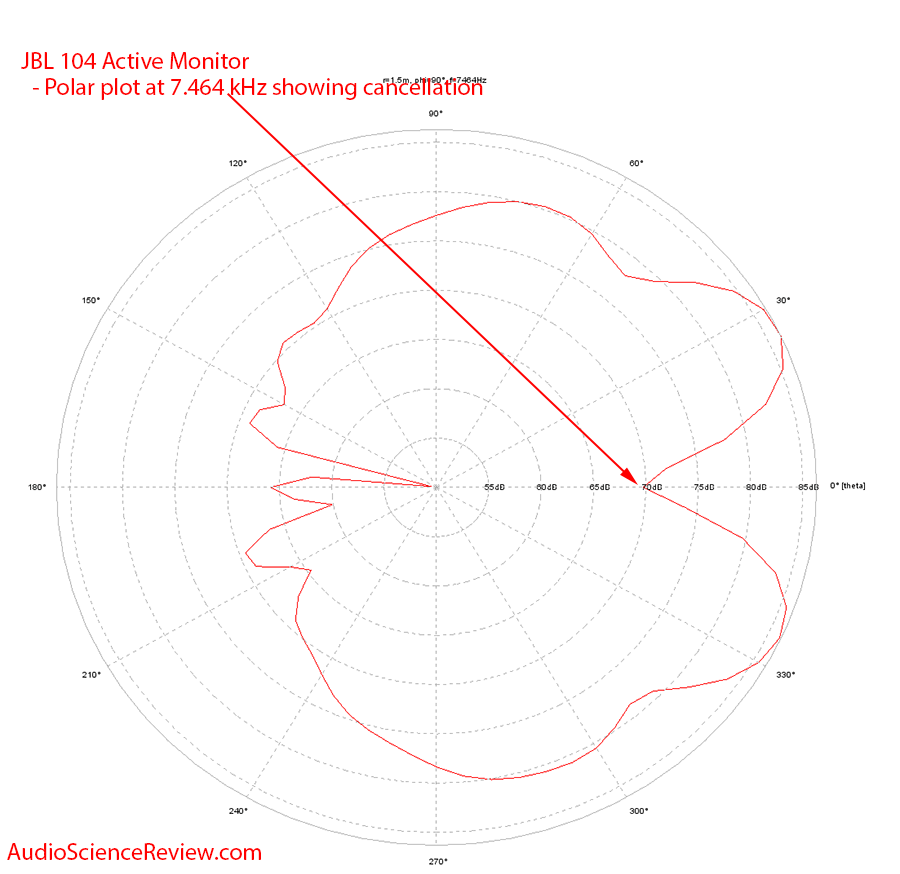 And let's show off what our software can do by looking at that in 3-D all around the speaker: 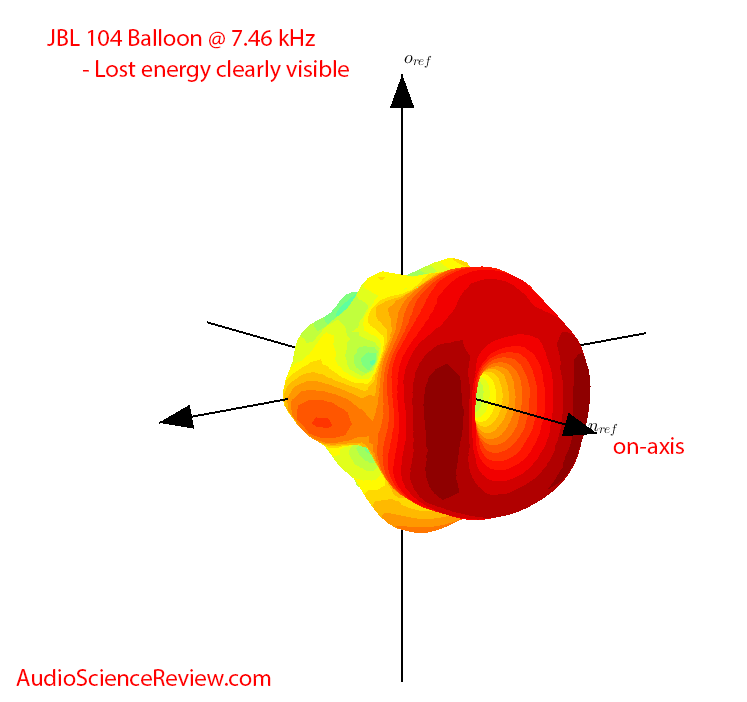 Expected in-room response assuming you listen in far-field, would be like this: 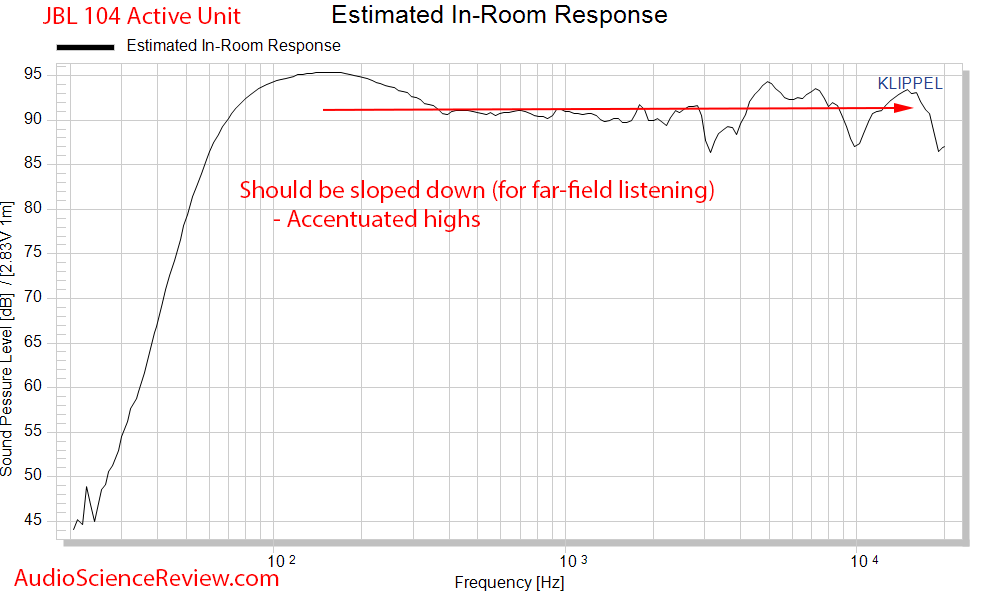 The sound should be bright as we normally like to see this tilted down.

We are done with key metrics. 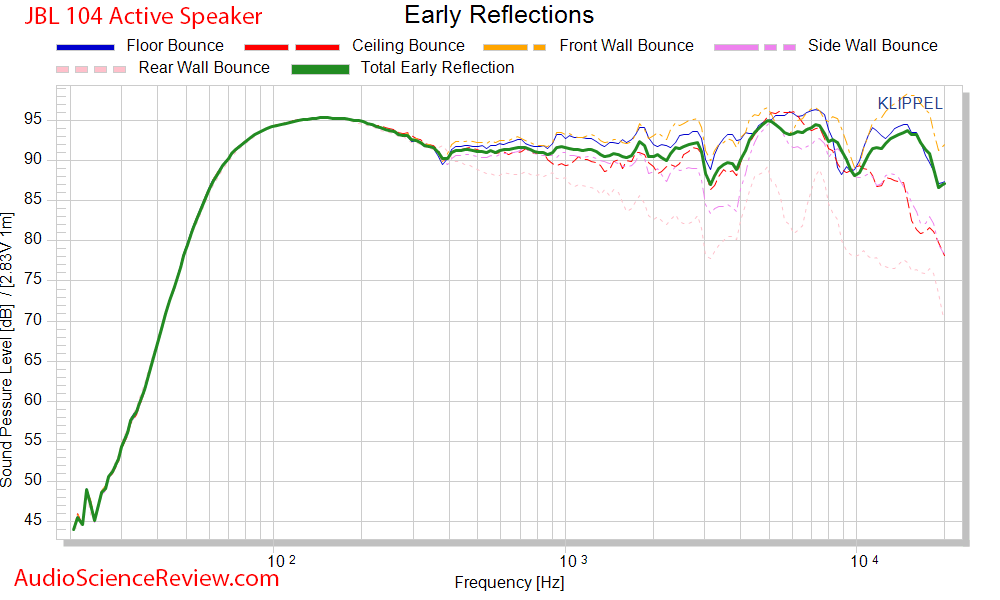 The coaxial driver produces nearly identical vertical and horizontal dispersion which accounts for above:

And here it is at all angles:

Our horizontal and vertical slice contour plots show what we already know (and highlighting the uneven response): 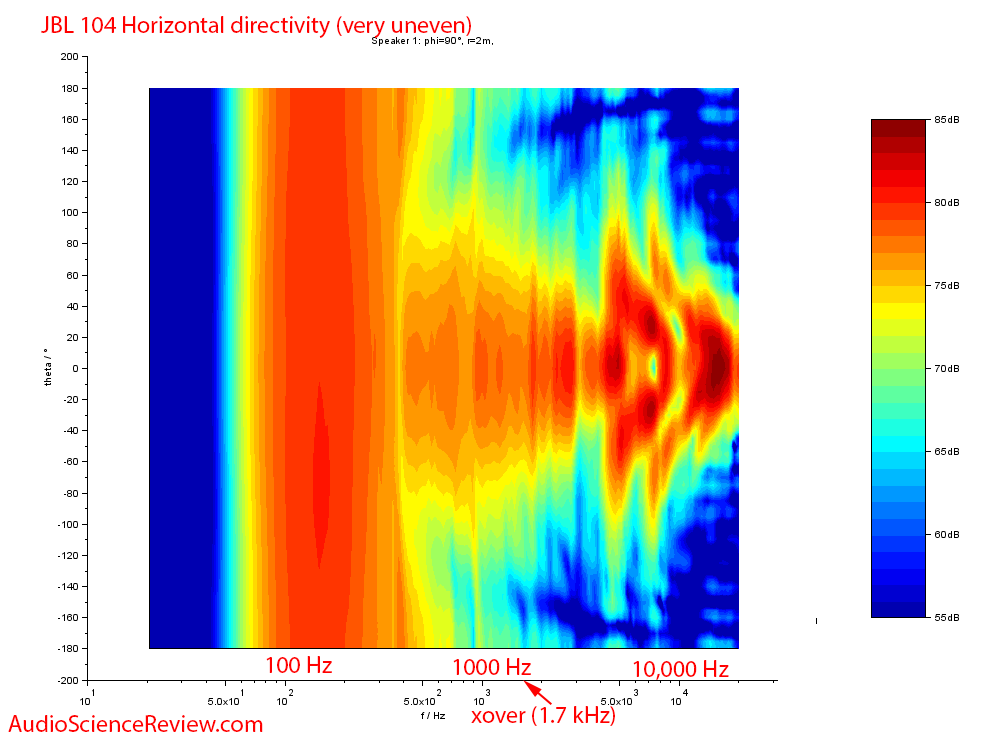 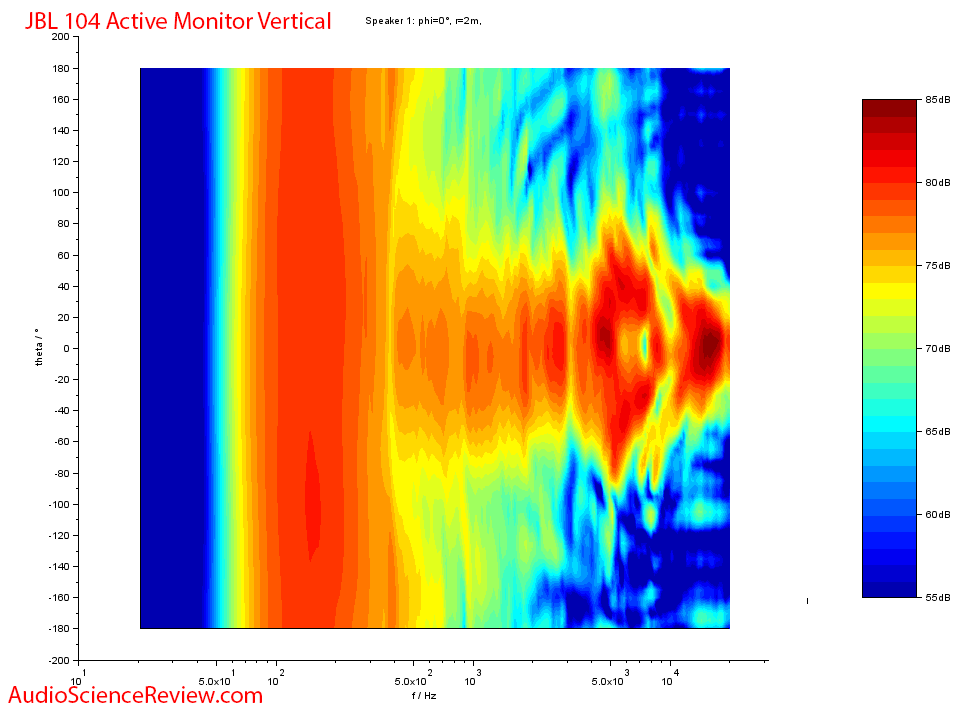 Accuracy of Results
I was interested in measuring the JBL 104 because Harman has a frequency response measurement for it: 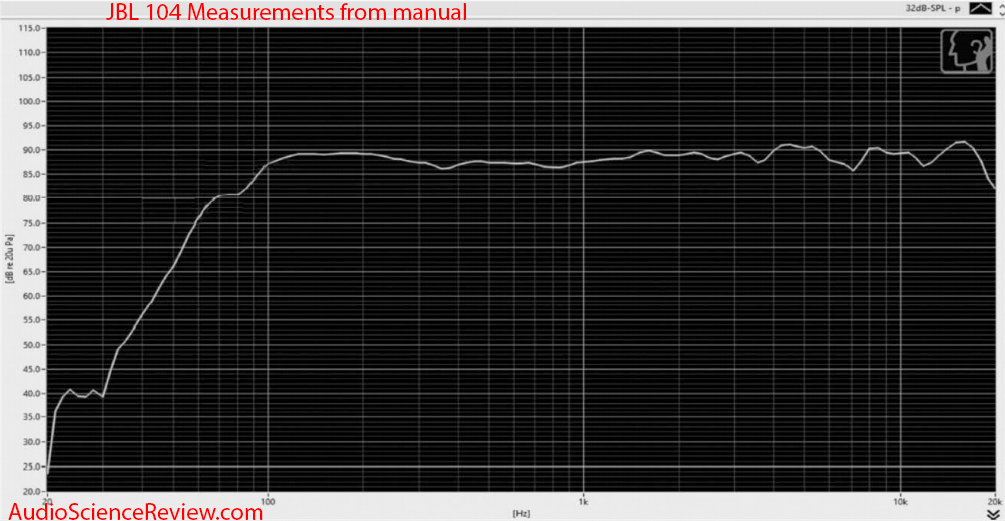 Yes, I know. Our measurements look nothing like this. Or do they? Look to the left: the scale is from 20 to 115 dB! That is a huge scale which helps to compress the graph a lot. We too can play that game: 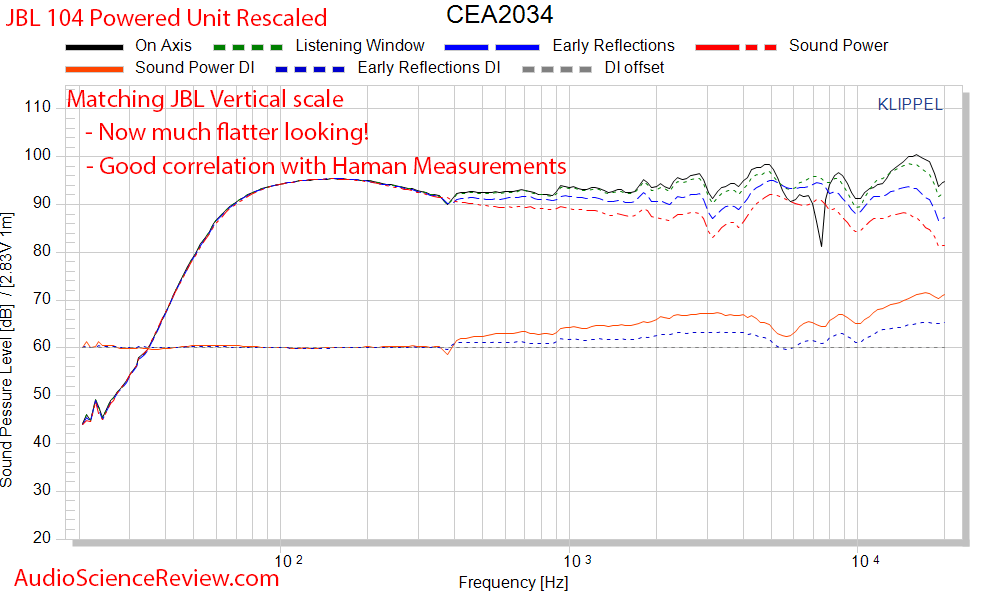 Neat trick, ha? CEA-2034 standard rightly requires 50 dB scale which is what I have used in this review and will do so in the future. That way we can properly see the variations in frequency response.

The JBL graph is quite smooth which tells me it lacks resolution and hence the fact that we have more exaggerated ups and downs but overall, the correlation is quite good.

Informal Listening Tests
The character of JBL 104 depended on the music you played. On some content, it sounded like a baby version of jBL 305P Mark ii. The latter of course had deeper bass and warmer sound but I was surprised how close the 104 came. On other content though such as female vocals and anything that had "lisping," the JBL 104 became too bright and annoying. This was after a moment of "ah, that sounds detailed."

Conclusions
I don't know how we got fixated on testing so many JBL products but here we are. The JBL 104 drivers by themselves are quite poor. Heavy EQ in its amplifier though tries to make-up for some of that. Objective results are still nothing to write home about. Subjective listening depends on the content naturally as you either excite the peaks or don't. If you do not, it sounds alright and performs well above its price point. Can't recommend it though if you want a true hi-fi experience.

Drove 200 miles roundtrip in pouring rain and tons and tons of traffic to pick up 7 more speaker to test! If you think I am going to pay for all gas and time spent on the road, you are very much mistaken! Please pay up by donating using: https://www.audiosciencereview.com/forum/index.php?threads/how-to-support-audio-science-review.8150/
Amir
Founder, Audio Science Review
Founder, Madrona Digital
Contributing Editor, Widescreen Review Magazine
Click for My Technical Background
Master List of Audio Reviews
OP

Here is a bit more for those of you who enjoy spending time on these measurements.

I measured the horizontal dispersion at 19 Khz to see how aligned the measurement system is: 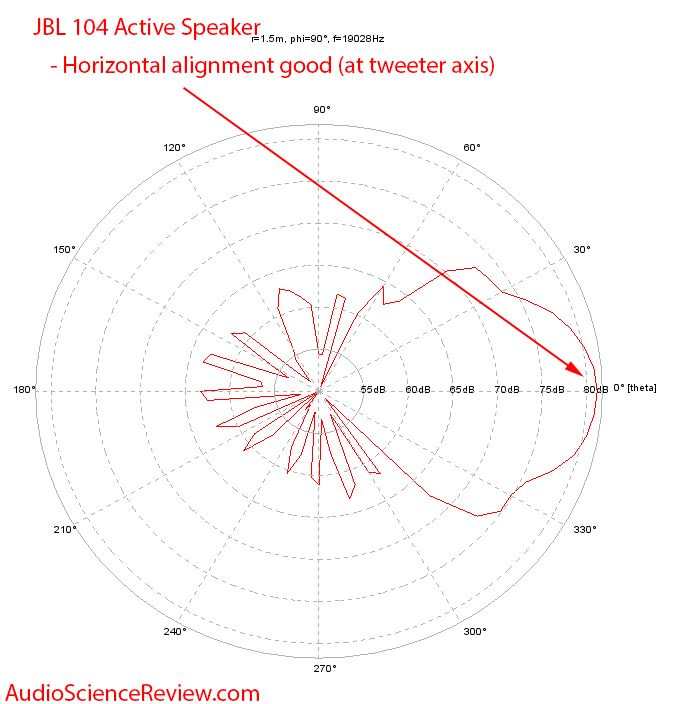 So our rotational axis is quite good.

Vertically it is challenged though: 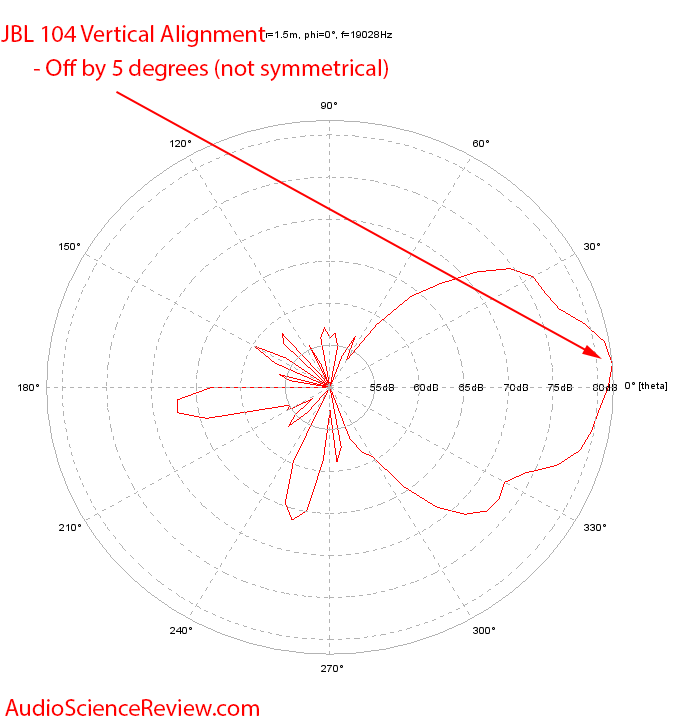 I had knocked the microphone out of alignment and that may be in play. I will need to level everything and see if that makes it go away.

Then again I measured at lower frequency and it is tilted the other way: 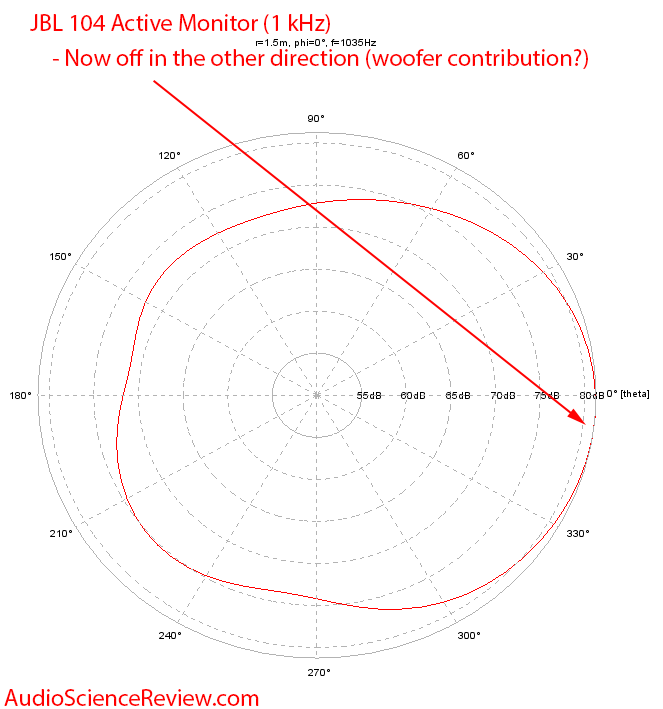 Forgot to post the data itself. Here it is.

That pretty much sums it up. I paid about $56 and am super pleased with them for what they are, but of course the 708p setup is a whole other experience.

We’re really digging the bottom of the barrel here. These low end Samsung speakers (305P MK II included) sound like a bunch of bees fighting inside of a tin garbage can. I wonder how the 705P’s measure?

Thunderlips said:
We’re really digging the bottom of the barrel here. These low end Samsung speakers (305P MK II included) sound like a bunch of bees fighting inside of a tin garbage can. I wonder how the 705P’s measure?
Click to expand...
They are not Samsung speakers...lol... JBL!

It will be interesting to see what $20 buys you.
Master List of Speaker Companies
C

sweetchaos said:
will be interesting to see what $20 buys you.
Click to expand...
Remember, $22 will get you a Dayton B652 AIR with 6.5" woofer and AMT ribbon tweeter... You provide the amp though.. Perhaps the $10 Kinter?

We may criticise, but given the price, these speakers are nothing short of a triumph.
One of the things that providing active equalisation gets you is that the designer can trade off design compromises differently. If you know that the frequency response will be externally compensated, you can trade off a flat response in exchange for some other desirable attribute. When things get this cheap, that isn't to be ignored, it is to be grasped with both hands.

Being a coaxial design on-axis response is always going to be ragged. It is apparent that JBL have put some real design effort into managing some of the issues - the bass driver has a specialised surround design that is clearly intended to ameliorate some of the nasties. But no matter what, the design intent is almost certainly not to listen on-axis. Indeed desktop placement would place the designed listening axis at about 30 degrees up in the vertical, and possibly with some off axis sideways angle as well. On axis hole is arguably not so much a flaw as a design feature compromise. It would be very interesting to see what the horizontal directivity is like measured above the horizontal axis.
The night is coming, and its filled with dark surprise.

Cahudson42 said:
Remember, $22 will get you a Dayton B652 AIR with 6.5" woofer and AMT ribbon tweeter... You provide the amp though.. Perhaps the $10 Kinter?
Click to expand...
Those Dayton's are impossibly cheap for what they suggest to be offering !

Over the time I got the feeling that women tend to prefer oval shaped objects more than men. Considering a girl depicted on pictures within product webpage, this may be aimed for female customers, designwise.

pavuol said:
Over the time I got the feeling that women tend to prefer oval shaped objects more than men. Considering a girl depicted on pictures within product webpage, this may be aimed for female customers, designwise.
Click to expand...
As well. However it is close to optimal for managing diffraction. Whether this drives the design is hard to know, but there are solid technical reasons for using such a shape.
The night is coming, and its filled with dark surprise.

pavuol said:
Over the time I got the feeling that women tend to prefer oval shaped objects more than men. Considering a girl depicted on pictures within product webpage, this may be aimed for female customers, designwise.
Click to expand...
One reviewer video said they look like suppositories >@^_*@<

There should be another warning in user manual: "Further user equalising is strictly forbidden! We have already equalised it for you in our lab more than enough!"

pavuol said:
That's nasty I think, we should make some "more polite" jokes, like:

There should be another warning in user manual: "Further user equalising is strictly forbidden! We have already equalised it for you in our lab more than enough!"

Click to expand...
When @amirm said they sound, "the JBL 104 became too bright and annoying" I was thinking they might be perfect for me because I max the high end on the EQ so I can hear that stuff.

Doodski said:
One reviewer video said they look like suppositories >@^_*@<
Click to expand...
Curous to know which video site you watch your reviews on.

daftcombo said:
Curous to know which video site you watch your reviews on.
Click to expand...
This guy @ 1 minute into the video>