daftcombo said:
We need a kind of SINAD chart, for instance in the form of a calculation of the sum of areas (integrals) betwen estimated in-room curve & target. And rank them from highest to smallest.


View attachment 45274
Click to expand...
You read my mind. I think that would make a great KPI.

Matias said:
Great first article!
Could you add an impulse response too for the standard set of graphs? Always interesting to see how drivers time responses blend with each other or not.
Click to expand...
Impulse, step response and phase please, yes!

amirm said:
I post it uncompressed but the way the graph was generated was lossy. Here it is again:
View attachment 45252

Click on it for larger image.
Click to expand...
Amazing resolution. Are the finger-like lines stretching out from 1kHz to the hotspots at the right/top and right/bottom part of the graph due to the modal effects of the waveguide?
Home: RME ADI-2 Pro FS R BE—Sennheiser HD820
Work: JDS Labs Atom—AKG K371
Measurement: Behringer ECM8000—Behringer UMC204HD—REW

Interference said:
From what I have seen in teardowns, these use a STA-series digital amplifier, so that means the analog signal is fed through an ADC.

As a consumer, I would not be very happy at the idea of spending money on a DAC just to have the signal re-digitised by the speaker.

Here we need to waste money on a DAC just because the manufacturer is better off not providing a digital input altogether.

I would like to see more studio monitors with digital inputs (and DSP controllers for those: as of today if I wanted a physical knob on a stand-alone device to control the volume of a digital stream the options are quite limited).
Click to expand...
How would digital inputs work for speakers that are sold singly?

Matias said:
Also impedance, to know how hard a speaker is to drive. Maybe a single metric combining impedance and phase to simplify?
Click to expand...
As thiese speakers are active, we can't measure impedance.

amirm said:
I know some of you want to see more pretty plots so here is the contour for 305P:

We can see the same hot spots due to resonances we saw in the review graphs.
Click to expand...
Could be more pretty with a different color table. I may take a stab at making this more pretty later if I can make time.
.sig

Matias said:
One is active, the other is passive.
But I am saying overall, not only these, to add difficulty to drive as a standard set of measurements.
Click to expand...
I was talking about the 305p's, forgor about the others, sorry.
Yes, impedance plot for passive speakers would be useful also. We don't even need a spinorama for it.
T

amirm said:
I know some of you want to see more pretty plots so here is the contour for 305P:

We can see the same hot spots due to resonances we saw in the review graphs.
Click to expand...
amazing work! I have a question on the weighting that determines the estimate of in- room response. Wouldn’t the directivity affect the balance of direct vs reflected significantly?

daftcombo said:
We need a kind of SINAD chart, for instance in the form of a calculation of the sum of areas (integrals) betwen estimated in-room curve & target. And rank them from highest to smallest.
Click to expand...
I'm skeptical towards this idea. There are many more parameters in a loudspeaker than in a dac or an amp. A dac and amp should simply try to be transparent. That's all. So in a way it's possible to make a simple chart. Loudspeakers should also be transparent, ideally. But given that they are physical transducers there are always inherent trade-offs, and I'm not sure whether we really are at a point now where we can make one such chart for loudspeakers where they are ranked from better to worse.

Example: A waveguide creates more even dispersion characteristics. This is in line with what Tooles research predicts that listeners like. But a waveguide also limits dispersion somewhat. This goes against another of Tooles findings, that listeners often seem to like wide directivity in loudspeakers. So say that we have two speakers, A and B. Speaker A has more even directivity, but it's more narrow because of a waveguide. Speaker B has a directivity that is somewhat more uneven but still good (a three-way with a smaller midrange and tweeter perhaps), but it's much wider. How do we rank these two speakers against each other?

My guess, based on my own anecdotal experiences and research I have read, is that some people would prefer speaker A and some speaker B. This would depend on many things - musical taste (classical music often benefits more from wide directivity than electronic music for example), room and speaker placement, and possibly taste/preference. So I would see it as possibly misleading to make a chart with one speaker ranking.

As I see it, the information Amir has begun to provide here will be extremely, extremely useful. But I think it's also a goal to learn to place that information in context, and educate ourselves as to what these data points actually mean perceptually.

That said, I understand that making rankings has appeal. It obviously makes the results more accessible and comparable. The SINAD chart is probably one reason for the success of ASR. So if such a chart is desirable, my suggestion is to make at least two, possibly three charts, of dimensions which are relevant when choosing loudspeakers.
O

gvl said:
Does the hiss decrease when the volume is turned down on the back? I got the 104s and hiss is there, but mostly goes away if I keep the volume at or below the unity gain and compensate with higher input level.
Click to expand...
It definitely does help to have the volume as low as possible in the back and use my Topping D50 on its highest volume setting but when sitting at my desk it's there. How close do you sit to them?
F 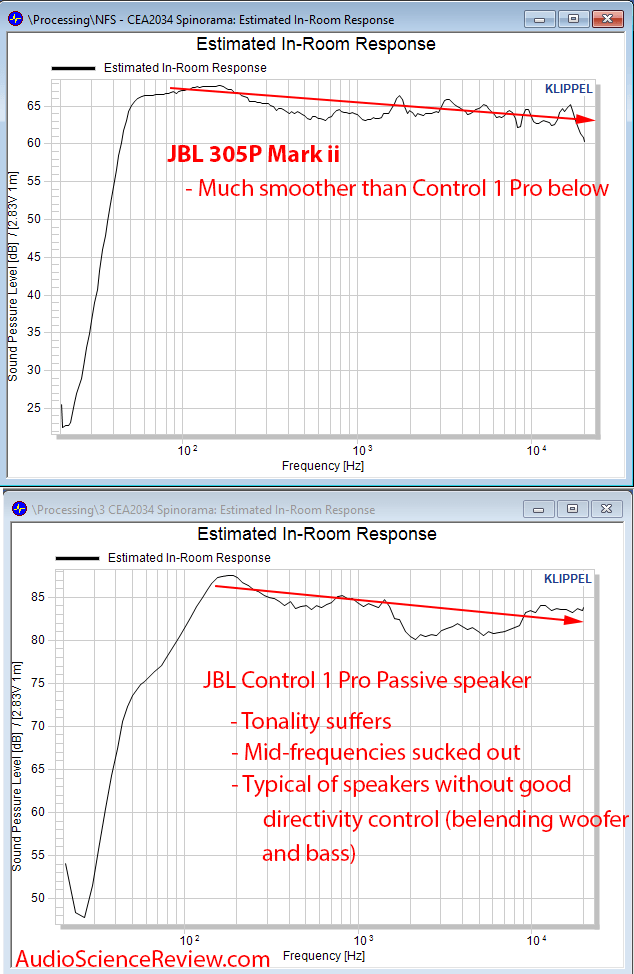 Anyway, great article. I learned a lot and feel like I can finally make full sense of those spinorama plots.
If you own more than seven things, the things own you.
O

Uy Lam said:
So much data... really impressive, and much appreciated. Long time lurker, and made an account just to comment. I'd be curious about the entry level KEFs, as I hear so many good things. I have the KEF Q150s, and my roommate has the ELAC 2.0 B6.2s. As for theses JBL's, definitely a killer for a desktop setup!
Click to expand...
Same , i'd also be curious. They have this huge store with like hundreds of speakers you can try out. I have to say the Kef q series punch way above their price range. They just sound so natural. They have this insane price to performance imo , but the same can't be said for their more expensive series. Elac also sounded pretty good for even a lower budget.

Boy I feel i'm not donating enough money to pay for all of this work....
S

Thomas_A said:
Whether it has good tonal balance can be discussed. If the simulated room response looks like that also measured at listening position, I would not prefer that. The range 300-1500 Hz is lower in level than the 2000-8000 Hz. I would prefer the opposite.
Click to expand...
Agreed - to me, the measurements seem quite consistent with a perception that the speaker's tonal balance is a tad bright and has somewhat scooped mids. That's certainly been my subjective impression of the 306p. If I were using them on a permanent basis, I would probably use a high shelf EQ to attenuate the treble since I'm not sure the HF trim switch even does it to my liking.

I second the suggestion that the X-axis be given in terms of a more standard 10-20k scale - it would make the charts much easier to interpret given how ubiquitous similarly scaled REW charts are in the online audio world.

But this is fantastic work. Thank you so much!
V

CerealKiller said:
Boy I feel i'm not donating enough money to pay for all of this work....
Click to expand...
Isn’t that the truth. Thanks again Amir.