Is the AHB2 suitable for my setup?

abdo123 said:
Then why is OP claiming that the Hegel is capable of doubling power with halving of impedance?
Click to expand...

Was what I was told
The graph shows that the 2 ohm capability is better of the et400. So safe bet to buy it I gues
OP
B

voodooless said:
Make belief? @BossBunos, redo the test now you know you've been fed lies about the amplifier performance. I bet now the Purify will suddenly sound better. Like magic
Click to expand...

Haha that would be classic. But no I borrowed the purifi with the impression that it would be much better than the Hegel and my wife would walk in and ask me what I had changed in the system because it sounded so much better now!

The fact is that I was kinda disappointed.

BossBunos said:
my wife would walk in and ask me what I had changed in the system because it sounded so much better now!
Click to expand...

That only ever happens in fake reviews
Do diamonds shine on the dark side of the moon?
R

First, I don't think you can bridge the 1ET400A.
It's certainly not recommended, from what I read in the datasheet: "(...) bridging two 1ET400A designs will result in performance degradation (...) Bridging is therefore not recommended. All operation and performance specs are void in this configuration"

Second, that would never fly for a speaker with impedance dipping below 3 ohm.
Last edited: Oct 18, 2021
A

BossBunos said:
Haha that would be classic. But no I borrowed the purifi with the impression that it would be much better than the Hegel and my wife would walk in and ask me what I had changed in the system because it sounded so much better now!

The fact is that I was kinda disappointed.
Click to expand...

My wife only says it sounds better when my speakers are off.

BossBunos said:
It's probably cause the Hegel is voiced with thicker bass while the purifi is ruler flat.
Click to expand...

Rja4000 said:
First, I don't think you can bridge the 1ET400A.
It's certainly not recommended, from what I read in the datasheet: "(...) bridging two 1ET400A designs will result in performance degradation (...) Bridging is therefore not recommended. All operation and performance specs are void in this configuration"

Second, that would never fly for a speaker with impedance dipping below 3 ohm.
Click to expand...

I am someone that upgraded from a Hegel Rost to the AHB2. At the time, I was using some Tannoy XT6Fs. The difference in sound was substantial enough for me to notice, with a AHB2 providing "wider, fuller" bass sound that I was not expecting but took as a sign that AHB2 was able to drive them better. It does, after all afford more wattage. Again, I was not expecting a difference in sound as I thought I knew better. But the XT6Fs seem to be harder to drive than a lot of speakers. I know the XT8Fs dip to 3.2 ohms, so I imagine something similar is going on with the ones I had. I accounted it to that.

The review already mentioned (that I am attaching) says this:

"Under dynamic conditions there’s enough voltage headroom to sustain 124W and 225W into 8/4ohm but current limiting means there’s only 59W and 6W permitted into 2/1ohm loads [see Graph 1, below, but also note the Röst’s very consistent THD regardless of load]. So speakers that include dips to low impedance are best avoided (by way of reference all HFN speaker lab tests include this information)."

Based on the review and measurements, the Rost is a decent-enough and overpriced integrated but is not a grown up one. Disappointing is how I would describe it given how much the marketing does to promote the engineer/engineering. It certainly does not work power wise like you thought it did. I know restorerjohn says that this type of issue with low impedence is usually not one that is a big deal in the real world, but I think that my particular combo of the Tannoy and Hegel is a particularly bad one--and that's my fault. I can't speak to your Focals and what you heard as I have not seen measurements. I do expect a more competent design in your Focals than in the Tannoys (which seems to be a terrible speaker company these days), so the fact that we heard different things does not surprise me. TLDR: I think that the Tannoys and Hegel have design issues and compromises that are bad for the price and that made a perfect storm of drivability issues that most would not have. I got rid of both as I want my money to go toward good engineering.

That being said, if I had a Purifi amp I would in no way exchange it for a AHB2. There is simply no need. Indeed, as thrilled as I am with the AHB2, I got it before the Purifi amps came out and if I were buying an amp today I would go for the extra wattage of the latter.


Edit: here is a graph of the XT8F impedance. Would love to hear thoughts on whether this would be tough to drive by an amp with current limiting below 4ohms. From: https://hometheaterhifi.com/reviews...olution-xt-8f-floor-standing-speakers-review/ 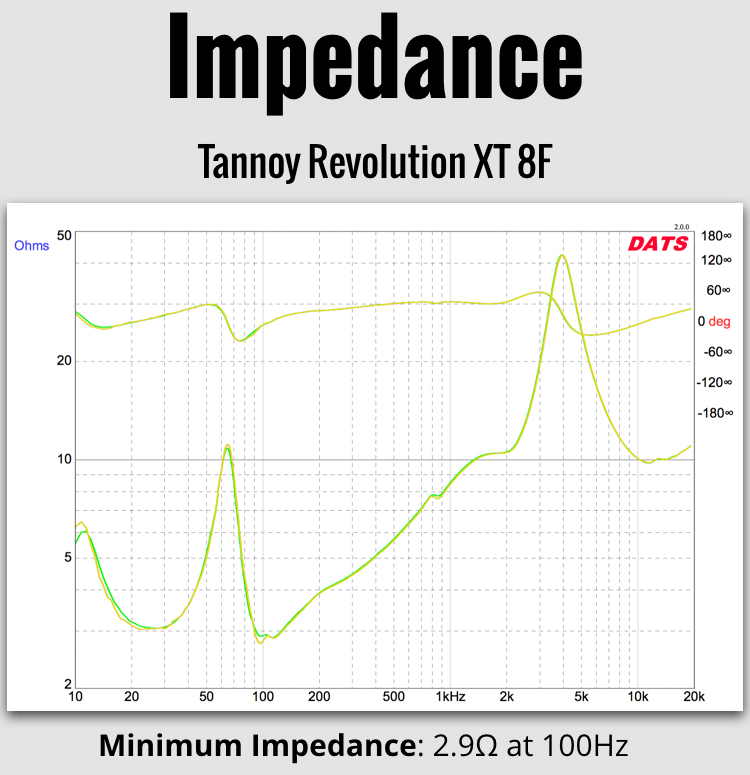 amper42 said:
My Hegel H90 sounds awesome with my BMR monitors, even better than my Purifi amp.
Click to expand...

Why exactly is the H90 better sounding to you?
A

BossBunos said:
Why exactly is the H90 better sounding to you?
Click to expand...

The Hegel H90 has a USB interface that I plug into the MacBook Pro. This configuration turns the H90 into a souncard for the MBP that is selectable via Sound preferences. In this configuration, the Hegel H90 internal DAC provides a dynamic bass punch that I enjoy. I don't hear that same sound when connecting my Denon DCD-800NE CD player into the H90 analog inputs. That Hegel USB interface is what I use with the BMR's.

However, you should understand the Hegel H90 offers only a small fraction of the power provided by the Purifi amp. If I put a larger load on the H90 like the Revel F328Be speakers the H90 runs out of power quickly and the Purifi by comparison sounds 1000x better. So from my perspective, some smaller speakers can sound great on the Hegel H90 at moderate volume (70dB) levels using the USB input. But don't expect the H90 to provide anywhere near the power of the Purifi amp.

I know this is probably hard to understand. Most of us are conditioned for a quality piece of gear to sound better in all circumstances and there are individual circumstances where even a lower powered Hegel H90 can sound really nice.

In your particular case, with the Sopra 2 my 1st choice would be to try the Purifi amp. If that didn't do it for me I would try the ABH2 or maybe even two ABH2 with one amp on each speaker in mono mode.
Last edited: Oct 18, 2021
OP
B

Since the data shows that it has nothing to do with low impedance capability of the Hegel (because it simply is not that good in 2 ohm) it must have been something else. Maybe an upstream component (preamp section of the Hegel or just my imagination). I'm now considering the 1ET400 or NC1200 based amps. Especially because I use dirac which will need at least 6 db of headroom. So a powerful amp will be useful to drive the speakers at high levels. But first I will wait for the 1ET7040SA to launch. Rogue audio and vtv already have announced amps with these modules.
You must log in or register to reply here.

How do I test if the PreOuts of my AVR or the power amplifiers are clipping?