Hi there,
Would you consider a 26x22 ft room too square to be good for sound? It’s exact dimensions are (lxwxh) 26’11” x 22’4” x 8’10” or in the metric system 8m22 x 6m82 x 2m70.
Although not mathematically square, would you consider this to be too square to avoid sonic havoc? (Not asking for dsp and possible room correction solutions, just curious if this room is considered square, in other words: do those 4 feet of extra length make a difference). Thanks in advance for considering this question.
Greets,
Rudy

Well, almost - 5" difference so the graph wouldn't overlap itself, as with square data, so consider the pairs single lines 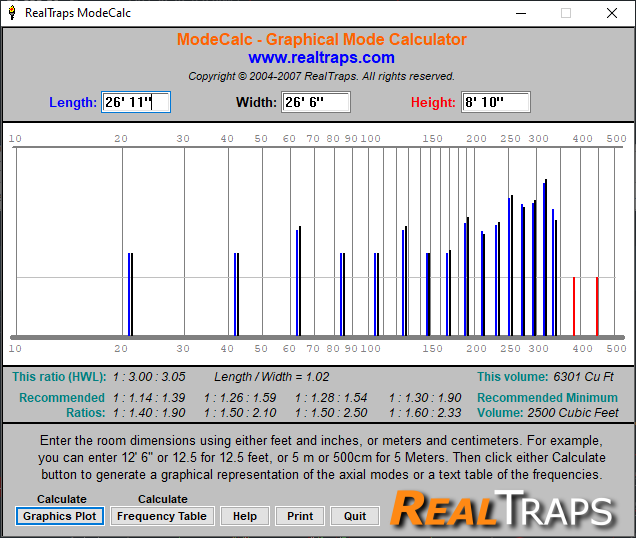 "rooms for recording and playing music are designed to have many resonances that are distributed evenly, rather than just a few resonances at the same or nearby frequencies. " 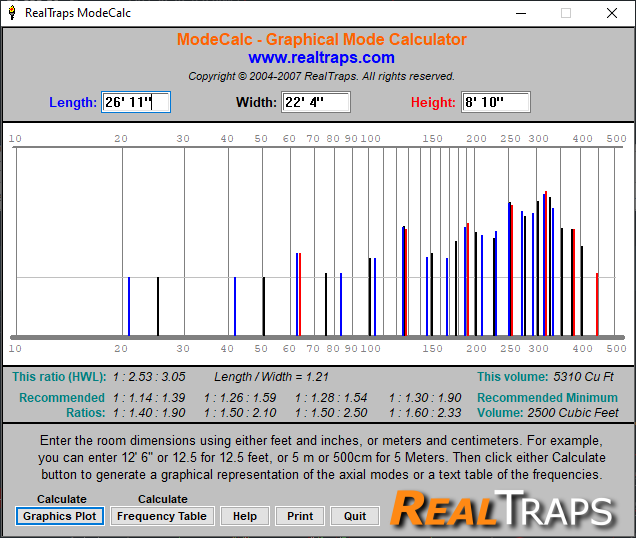 Worst room ever. Fellow had an 11 ft x 11ft x 11ft room made of metal. OMG, how awful the sound. He needed to move his rig from the living room at least for a couple years. This was a possible place he could put it. It lasted about one month. Sacrifices were made elsewhere in the house to end this horror.

I'd think though near square your room is enough un-square to avoid the worst results. As Ray's post shows it isn't a horror show, just not optimum.

Here is the room sim in REW. LP and speaker position makes a difference in the smoothness of the response line though major modes are not much effected. I'm showing only the axial modes. 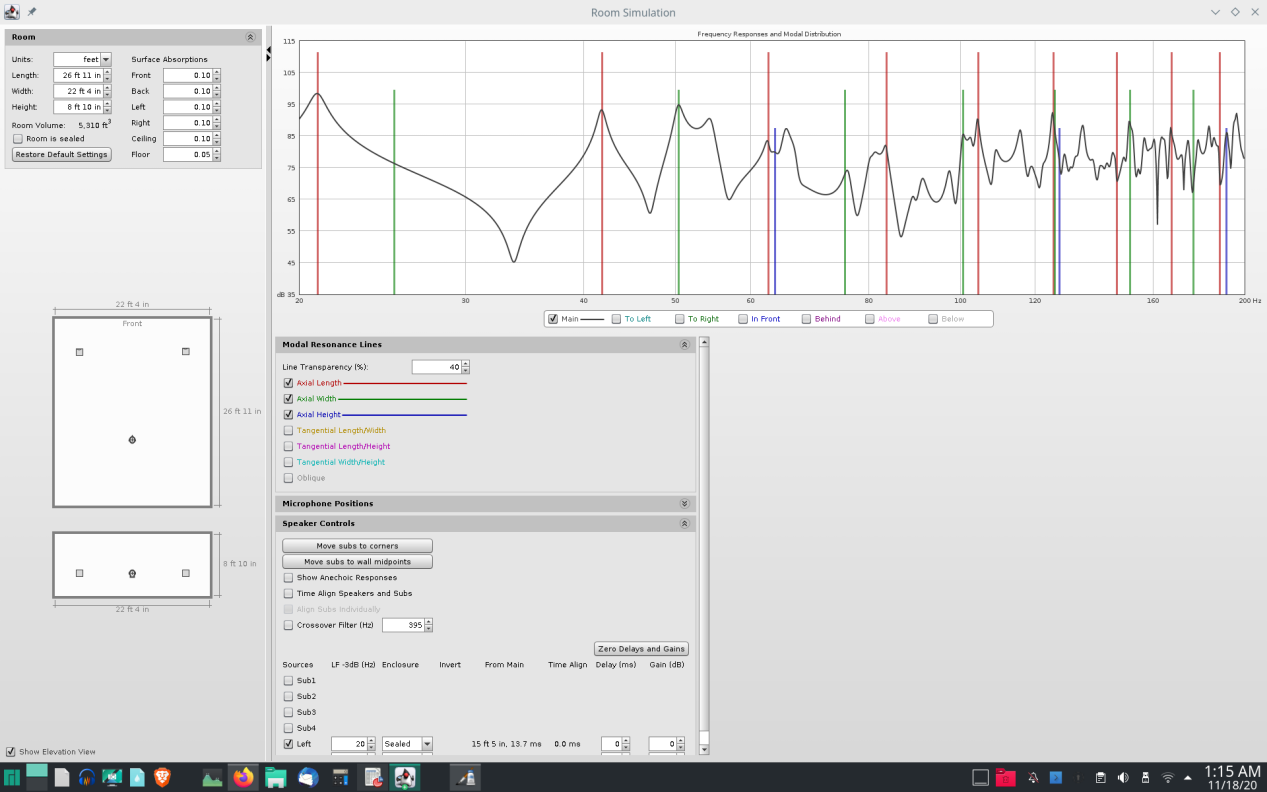 "The real purpose of the scientific method is to make sure Nature hasn't misled you into thinking you know something you don't actually know." Robert M. Pirsig
OP
M

Thanks for taking the trouble. I did visit the amroc room mode calculator and it gave more or less the same results, but I wasn’t sure how to evaluate these data. Not optimal indeed. Goid news is: the room is big. It should be able to accomodate large three way floorstanders. At my current LP however here is a annoying vertical bass dip. Standing upright sounds fine, sitting down the bass disappears.

Anyhow, hopefully I can treat the issues with room treatment, or two strategically placed subwoofers and some dsp.

Mentalrudy said:
At my current LP however here is a annoying vertical bass dip.
Click to expand...
Bass in music is not (very rarely) a single frequency.

Your mind will fill in the blanks based on the harmonics it receives.

"The brain perceives the pitch of a tone not only by its fundamental frequency, but also by the periodicity implied by the relationship between the higher harmonics; we may perceive the same pitch (perhaps with a different timbre) even if the fundamental frequency is missing from a tone."

https://en.wikipedia.org/wiki/Missing_fundamental#:~:text=A harmonic sound is said,at the fundamental frequency itself.&text=Nevertheless, a pitch corresponding to the fundamental may still be heard.

Depending on where you pick the string, the ratio of the fundamental to harmonics changes. It was difficult to pick this note wihout the second harmonic being higher in level. Took many tries.

You might say "Well, it will sound distorted if the fundamental is missing."

Observe the "distortion" measure of that undistorted note above. 22.7% - it has harmonics, it is no longer a pure sine, so, the software says it is distorted.

I can argue that music is distortion, the more, the better.


I have a deep hole around 48Hz in my setup:

I didn't know it was there until I measured.

It's a phase problem, this room is not a closed rectangle, so the phase of the standing waves of a test tone cancel, y travelling different distances, though the sound of either speaker alone doesn't create the dip at the listening position.

Mentalrudy said:
Would you consider a 26x22 ft room too square to be good for sound?
Click to expand...
Depends on what you're playing.

mansr said:
Depends on what you're playing.

Click to expand...
Funny. I was thinking of the Joni Mitchell version.


When I was at junior school, aged ten or so, I was in the playground when this girl, Lesley Humphreys who I never liked, came up to me and said 'you're a square'.

I didn't know what this was but the way she said it made it seem not a good thing to be. 'No I'm not'. I said.

When I got home that day I asked my Mum what a square was....... Yup, I was a square. I still am although a bit more rounded now!
I'm just an ordinary hi-fi listener with no special knowledge except what I've read (Toole and a few more) and from my attempts to improve things in my listening room.

Mentalrudy said:
Would you consider a 26x22 ft room too square to be good for sound?
Click to expand...
Nope.

But if you have free reign in this room, what I WOULD suggest is setting up your speakers along a diagonal. This is what Floyd Toole did in his square-ish home listening room back when he lived in Canada.

And, maybe even set them up not quite on a diagonal, to introduce a bit more diversity into the distances from your woofers to your walls in the horizontal plane. To the extent that your two speakers interact with your room differently in the bass region, their summed output will tend to smooth out a bit.
Speaker design is tradeoffs, Highness. Anyone who says differently is in marketing. - The Princess Bride (poetic license invoked)
You must log in or register to reply here.
Share: Facebook Google+ Reddit Pinterest Tumblr WhatsApp Email Link