Now, this might be an odd request as the Iphone 4 are around for some time, but they make good DAPs and are fairly repairable.
BUT: I replaced my Iphone 4 with an 4s - and the 4s sounds dull and lacks clarity. It is not like those "uhmm, I think the 4s lacks some... depth?Maybe?" impressions. It is audible almost from the first note,
especially with orchestra.
I even bought a second 4s and it sounds dull as well. Can't tell both 4s from each other but always from the clearer Iphone 4. Checked all settings, Eqs bypassed, checked with Music, File Explorer, VLC, Neutron. I am using Koss Porta Pros.
I would say, treble is missing around 6 kHz. VLC gave me even some strange Compressor / Limiter like "Radio Sound" that could not be defeated. But not the main issue here. Really strange.
I mean the 4s was sold to the Zillions? And no one ever noticed that the 4s misses treble?
So, does anyone still have both Iphones and could check frequency response of the 3,5mm jack?
All the best and thanks, Herbert
Last edited: May 27, 2019

Here are the things you need
iphone4
iphone4s
The frequency response of iphone4s has fallen below 20k, compared to iphone4
H

Wow, thanks, that was fast! And the drop even starts around 5kHz. Googled for tests,
never found one. Do they have any explanations for this? I have schematics and remember there are inductors/coils in the signal path to the headphones. They are missing in
the signal path to the rear adapter...
So maybe someone could compare both outputs?
BTW I now tried to compensate the loss of treble using the EQ of "Neutron", but the difference is less
audible than expected. So I assume the loss in treble even more severe than in the linked graphs.
All the best,
Herbert
Last edited: May 27, 2019

August said:
Here are the things you need
iphone4
iphone4s
The frequency response of iphone4s has fallen below 20k, compared to iphone4
Click to expand...
Interesting. Do you know of measurements from the more recent ones? (5/5s/6)

Arnandsway said:
Interesting. Do you know of measurements from the more recent ones? (5/5s/6)
Click to expand...
That website uses RMAA to test each generation of iphone, you just search in the upper right corner
Last edited: May 27, 2019

Being annoyed listening to music on the 4S with the reported level of drop at high frequencies...

Question is, can the Iphone 4s be modded to get treble back? Attached
is the circuitry of the headphone output. I see ferrite beads FL26/FL27
maybe the resulting lowpass is too strong?

Herbert said:
Question is, can the Iphone 4s be modded to get treble back?
Click to expand...
I don't think you're ever going to achieve what you're looking for. Honestly.
Last edited: May 28, 2019
H

I am experienced with smd devices. Don't need the new
crap where you can' t exchange batteries and add precious metals to the pile of electronic waste. Don't need apps.
Just need to get reached by phone or type texts like this.

So could anyone seriously look at the schematic posted before and check if the low pass filter is too slow?

For comparison, here is the Line audio output for the dock connector, no ferrite beads. Would be interesting to measure the frequency response of line out against headphone out... 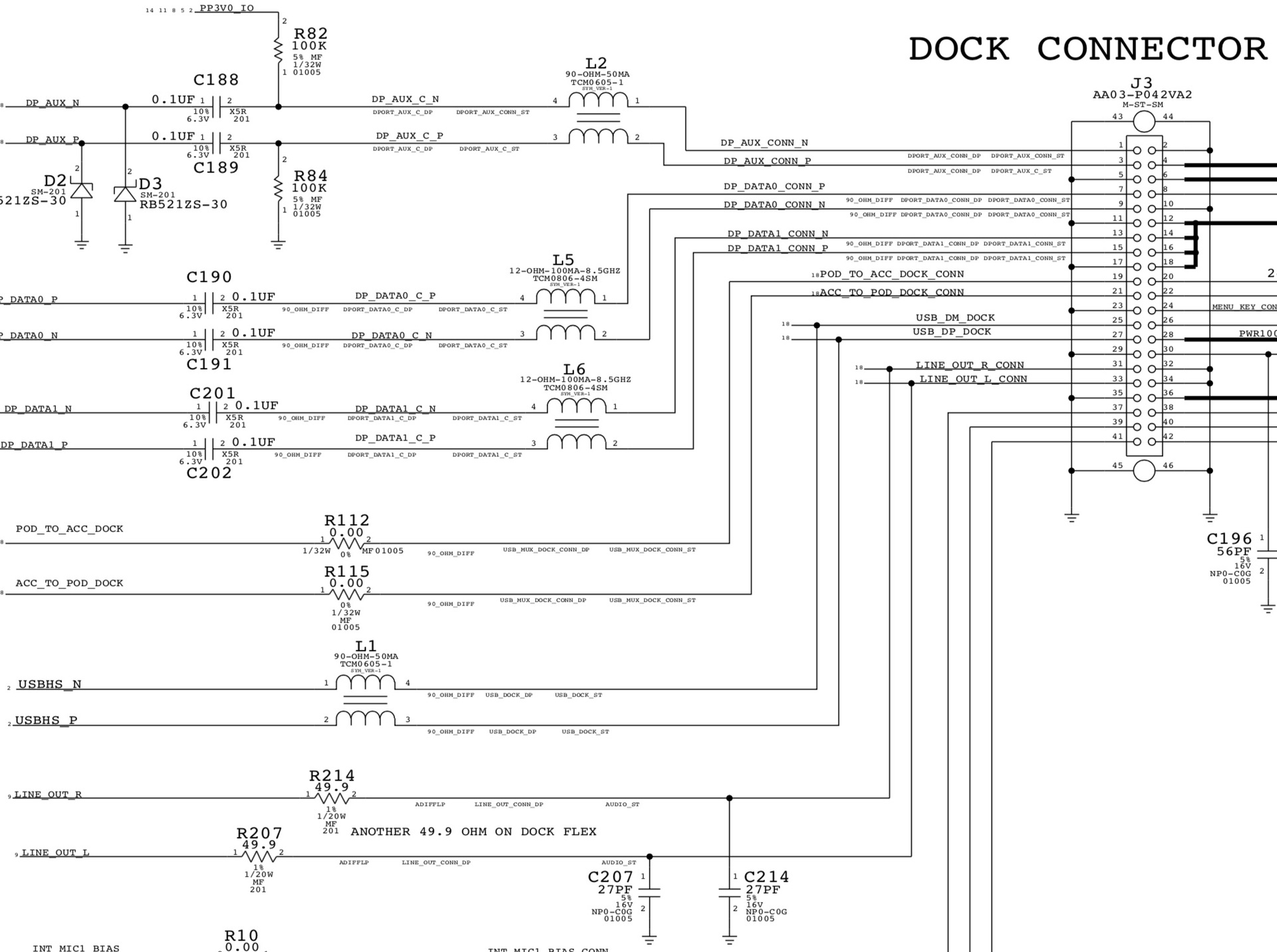 Resurrecting this thread because yesterday I bought an Iphone 6s - guess why, because of the headphone jack.
Hate this. I would have been lucky with the iphone 4 forever, but surfing in the net became a nightmare.
I checked the frequency response of the 6s @Ken Rockwell and @Soomal to make sure this iphone is linear - guess what:

Again, the 6s sounds muffled compared to the 4. Of course I checked that EQ was off and used Neutron-player for
comparison. I do not believe in listening tests but have no other choice than to do this -
therefor I use John Adam´s "The Chairman Dances", a Minimal Music piece for orchestra. As it has long sections
with repetative patters and uses the whole tonal spectrum of an orchestra,
it is easy to listen for a minute and memorize the sound.

The muffled sound (still pleasing with a warm lower end) is so obvious that I start to wonder whether it is really a lack of proper design.
Now I am wondering if modern Iphones (4s upwards) were / are are able to recognize which Apple earphones are attached to the 3,5mm jack -
and automatically adjust EQ to compensate for their characteristics - without the user´s knowledge...?

I soldered the cable of the ordinary Iphones shipped with the iphone 4 to the Koss´ transducers long time ago when I bought the Koss.
So if I there was any mechanism of automatic recognising, the 6s would think it communicases with Apple earphones -
whereas the 4 did not have this feature yet.

A small hint might be the following: When plugging between the 4 and 6s I can hear how the sound in the 6s changes when plugging
the headphones in - the ordinary effect we all know since the times of the Walkman when inserting a jack while the device is playing:
First it is mono for a second, as the jack is inserted, then stereo. With the 6s I have the impression, the sound is brighter the first half of
a second after insertion is completed - and then becomes muffled.

I am no technician - I do not know whether this unnoticed EQ-change only needs a certain resistor-value on the headphone side
to be triggered or more - but this resistor could be easily inserted in the remote / microphone part of the cable...

This IFixit teardown indicates that there might be space for this:
https://de.ifixit.com/Teardown/Apple+EarPods+Teardown/10501?lang=en

ferrite beads work in the MHz range, not in the audible range nor far above it. They are there to prevent HF entering the audio path.
You really need to go in the 10uH range to get any audible effects. Also the 56pF is not consequantial.

There is no smart 'headphone detection'. In order to do this one would need to sweep headphones and have a huge database. It would also be impossible to tell any planars apart as the vast majority is purely resistive in the audible range.
People have a tendency to overestimate their hearing capabilities.
Use your ears to listen to music not as an analyzer.
H

Hello Solderdude,
thanks for the reply. Well, as I wrote I soldered the Koss to an Apple earbud cable.
This cable has some electronics, most obvious microphone and volume control.
Apple would not need a huge database, as they only produced one,
maybe two types of headphones with plugs as standard accessoires.
Thus it would be logical if they compensated frequency response only for their own products.
This thread started only for the 4s. As I have the same effect on a 6s it cannot be a design flaw as you pointed out...

EDIT: Just checked the describe effect on the 6s, using File Explorer and Neutron for playback:

Press play before inserting the plug. During insertion, you´ll hear mono, completely normal.
When insertion is completed, for less of a second the music sounds clear, even more separated
(Separation could be a trick of the brain) Then playback stops for a blink of an eye - and continues,
now being muffled...
Last edited: Jan 9, 2020
A

Herbert said:
Hello Solderdude,
thanks for the reply. Well, as I wrote I soldered the Koss to an Apple earbud cable.
This cable has some electronics, most obvious microphone and volume control.
Apple would not need a huge database, as they only produced one,
maybe two types of headphones with plugs as standard accessoires.
Thus it would be logical if they compensated frequency response only for their own products.
This thread started only for the 4s. As I have the same effect on a 6s it cannot be a design flaw as you pointed out...
Click to expand...
Just resolder apple earbuds cable with mini-jack or other connector and measure that vs dumb cable.

I assume you mean the TRRS plug + 1 or 2 buttons + mic.
The mic and buttons are not in the headphone wiring but on a separate ring of the TRRS connector.
The buttons basically short the microphone or have different resistors in parallel to the mic which define - and + button functionality.
There is nothing there that let's the detection circuit in the phone 'see' which earbud is used.

Apple uses another standard as say android when it comes to mic and ground so it is important to use apple compatible products.

People have a tendency to overestimate their hearing capabilities.
Use your ears to listen to music not as an analyzer.
H

Guess using a dumb cable would be the best way to prove. Just do not have the time and nerve for this right now,
probably after the weekend.
There is definately a chipset in the cable, probably for digitizing the microphone signal, see the Ifixit link I gave in post #10:
TI25ASGVI 079 So In assume it is possible for an Iphone to sort out what (Apple) earbuds are connected...
Last edited: Jan 9, 2020

The wires for audio are directly connected.
The chip used for remote and mic could well identify the headphone amongst other functionality.
In that case the iphone could well apply a certain EQ when connected.

Is the sound of the Koss different than when it was connected to a TRS plug ?
using any other aftermarket i-phone compatible earbuds/phone would 'cancel' any deliberate tone control.
People have a tendency to overestimate their hearing capabilities.
Use your ears to listen to music not as an analyzer.
H

When I bought the Koss - maybe 4 years ago, maybe longer, - I did only use the Iphone 4.
I did toss the Koss´original plug because its volume control was not compatible with Apple´s.
This is why I use the cable of an original earbud.
When I decided to "upgrade" to a 4s - new ones were still available in 2019 as they were produced until 2016
for markets in developing countries - I noticed the muffled sound and thought it was a design flaw, this is why I started this thread.
Luckily the Iphone 4s died after a month and I got my money back.
As the effect is the same on the 6s, this might not be a design flaw but a hidden and annoying "feature".
And Apple constantly changes DACS/Headphone Amps from model to model so I guess this cannot be hardware related

Alex-D's test would be the simplest way to find out.
People have a tendency to overestimate their hearing capabilities.
Use your ears to listen to music not as an analyzer.
H

I have no gear to test. Just in case I will find out the Koss sounds identical on the 6s and 4
using a normal jack, it would be interesting to measure the 6s frequency response with / without earbuds
and their electronics attached...
I assume a 3,5mm three pin jack just shorts the Microphone/Remote signal to GND and should do no harm at all?
H

I removed the pcb that contains the Microphone, digitizer IC TI25ASGVI 079 and volume up / volume down buttons.
This pcb is independent from the audio signal that leads directly to the driver and is connected to Microphone / Common

Guess what - now the Iphone 4, the 4s and 6s sound identical over my Koss headphones.
It is only my ears to detect a difference that is now gone with the mod - but before the mod it was very obvious.
So there seems to be more behind the HPHONE_DET line / signal in the schematics posted above and it sounds like
a hidden frequency compensation is done, when Apple headphones are connected and the removed PCB
communicates this to the device...
Last edited: Jan 14, 2020
You must log in or register to reply here.
Share: Facebook Google+ Reddit Pinterest Tumblr WhatsApp Email Link