I have searched Youtube for a factory tour, maybe to shed some light on this single sided board question, but found nothing for the consumer factory in Malaysia.

Unless a proper engineer can answer this one, it will remain a mystery to us, it seems.
♥ REDBOOK!

TheBatsEar said:
I have searched Youtube for a factory tour, maybe to shed some light on this single sided board question, but found nothing for the consumer factory in Malaysia.

Unless a proper engineer can answer this one, it will remain a mystery to us, it seems.
Click to expand...

I am a proper engineer, and the only reasons I can see are cost saving over using a double sided (or more) PCB, or extensive jumpering-out of sections of the board which have features which aren't used - but that could just as easily be accomplished on a multi-layer board. I design up to 10 layer PCBs here at work, and while they cost a bit more than a single sided one, the flexibility and compactness of layout, which is important for grounding, outweighs what relatively small cost savings.

Unless of course this is part of Yamaha's 'secret sauce' claim than jumpers sound better than multi-layer boards or something like that.

Arrogant as well, shows what they think of their customers really.

Anyway, i have the A-S1200, don't think it's anything else but neutral. Bought it mainly for the VU meters which i think are splendiferous.
♥ REDBOOK!

Yup, I've seen this nonsense before. The guy obviously makes his living doing this, so he's not going to rock his own boat by being logical.
Hardware / Software Engineer for a High End Audio, Consumer Audio and Professional Cinema Audio Manufacturer
U

From what I understand they talk about tuning the treble/bass correction circuits. While a lot of their talk seems not to be too science oriented to say so, capacitor changes in that particular place should have audible effect, after all these corrections are ment to obviously change the sound. Perhaps europeans like a to boost treble 0.8dB more than japanese guys
OP

I doubt it. Europeans, like Japanese customers, like it neutral in that price range. A 0.8 dB treble boost would be considered defective. I doubt there is any tuning done by those clowns on a product that is already in production.

Then again, it's a clown world.
♥ REDBOOK!

I watched that video and hated it. It's absolutely ridiculous. What on earth is a "sound tuning for the European market"? I don't know what the power dynamic is in these two individuals' working relationship, but I felt sorry for the guy changing the parts in the amp having to pretend he understands the European guy's subjective descriptions of the sound. "Still, I'm missing some kind of rest. So, a little more body. Just, tiny little bit." WTF?!
DBR62 / A-S301 / MOTU M2 / SYS / BC3 / TX-492RDS
P

Curiously, one of the prominent YouTube reviewers noted he had corresponded with the Yamaha engineer responsible for this latest series of these amps and relayed that they purposefully had gone for an FR with boosted bass and treble energy.

If I'm not mistaken, does the stereophile review of the as3200 with simulated loudspeakers load bear this out? Seems it's a 0.15db variation over the FR, or is it too minor to be audible?
OP

pastorbarrett said:
Curiously, one of the prominent YouTube reviewers noted he had corresponded with the Yamaha engineer responsible for this latest series of these amps and relayed that they purposefully had gone for an FR with boosted bass and treble energy.
Click to expand...

No, prior to publication of his review he relayed to Yamaha his subjective listening impressions, which they corroborated as matching their design brief, namely prominent treble, mid bass...I just thought it interesting and curious that they would offer such a confirmation.
OP

Seems clowns are talking clowning amongst themselfs there ;-)

In my multichannel multi-driver multi-amplifier project, I recently rather intensively evaluated YAMAHA A-S3000 as shared in post #307 (including this inside and outside photos), post #308 and post #309, on the thread. 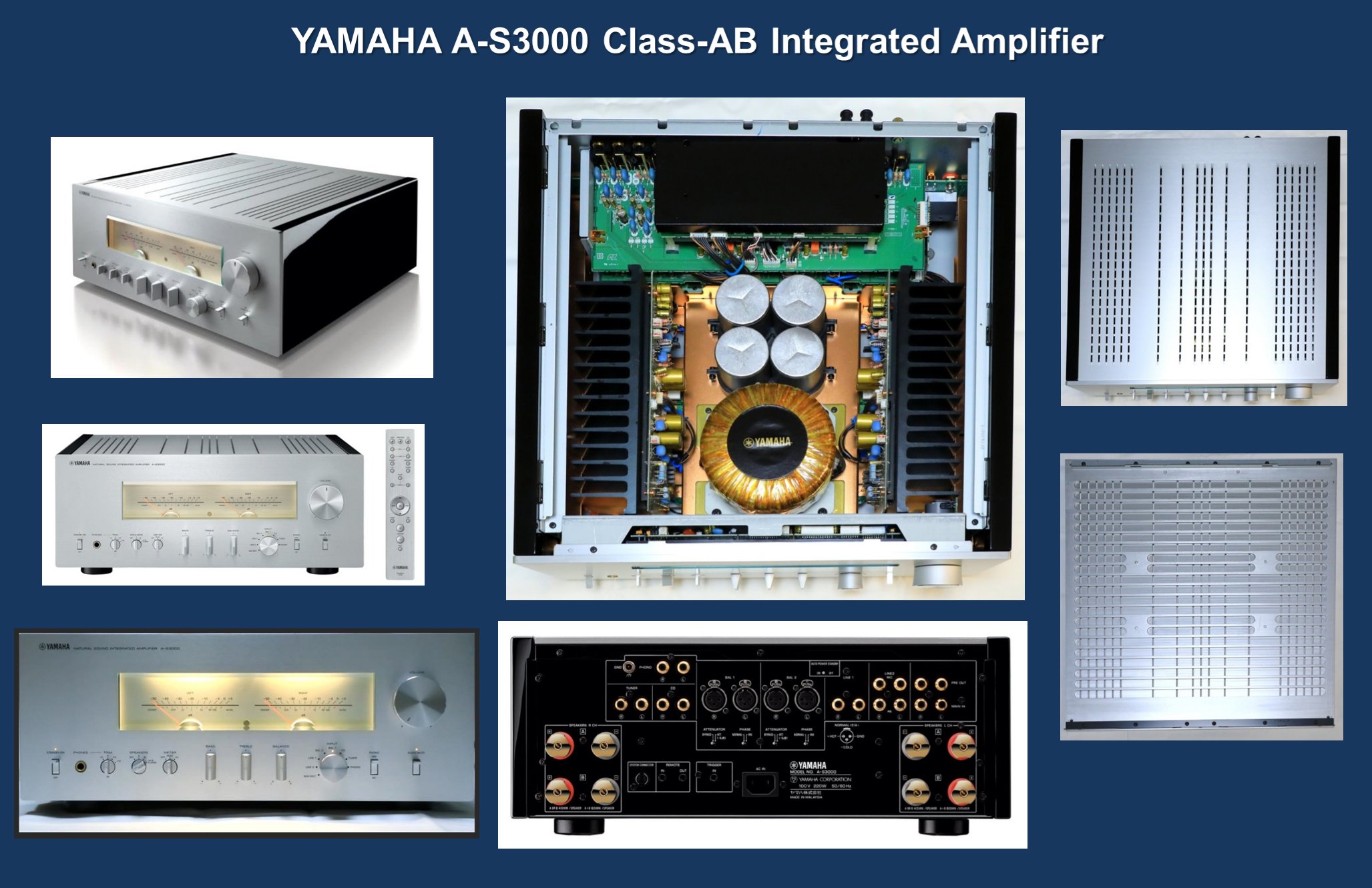 Wow, now that is what i would call an enthusiast system

Edit after reading your thread: Holy Batman, that's an interesting setup if i ever saw one. Really cool. Entirely over the top in my opinion, but really cool nonetheless.
Last edited: Apr 7, 2021
♥ REDBOOK!

TheBatsEar said:
Wow, now that is what i would call an enthusiast system

It certainly is a enthusiasts system and I want one!
OP

Wouldn't mind the Yamaha speakers myself to be honest.

But then, the surrounds and spiders are probably hardened and maybe even under risk of falling apart, after all those years.
♥ REDBOOK!

What do you think about smallest brother 202D? I am thinking to replace my really old Sony receiver with something affordable but with good for money quality sound ?


TheBatsEar said:
Anyone interested in looking inside Yamaha amps? I have a bunch in my collection, most of them need repair, all of them have to be opened eventually for dusting.

I'll start with some pictures i made inside a A-S1000 that i bought for 500€ in mint condition. This one weighs 25kg, it's a serious amp. For example, if you move the bass knob from 0, a relay clicks and adds it into the signal path. A bit of dust inside and a black sharpie marking on the volume knob was all that was wrong with it. The amp was about 11 years old when i got it, i eventually ugraded to a A-S1200 and sold this one for 600€. To me it sounded just as good as the A-S1200, but lacks standby and VU meters.

Not a scratch. Very large, heavy and deep:
View attachment 120970
Click to expand...

I bought a used A-S501 and am happy with it. It does well driving Focal Aria 906 speakers. I like the choice of bypass, called Pure Direct, or tone controls engaged, controllable from the remote, too. To my ear Pure Direct is neutral, not "musical," and while the tone controls do boost some frequencies, it is still not "warm" or "musical." That's fine with me, but it would be nice to have a Pre-in input so I could compare a pre-amplifier with the Yamaha pre-amp stage.

The USB jack on the rear is supposed to provide charging power, but it does nothing when I connect a phone, a tablet, or other chargeable device.

Although quite belated, the budget one Yamaha A-S301 which I am using at my upstairs office. I used it only tentatively in my main system at listening room since no XLR balanced input available; 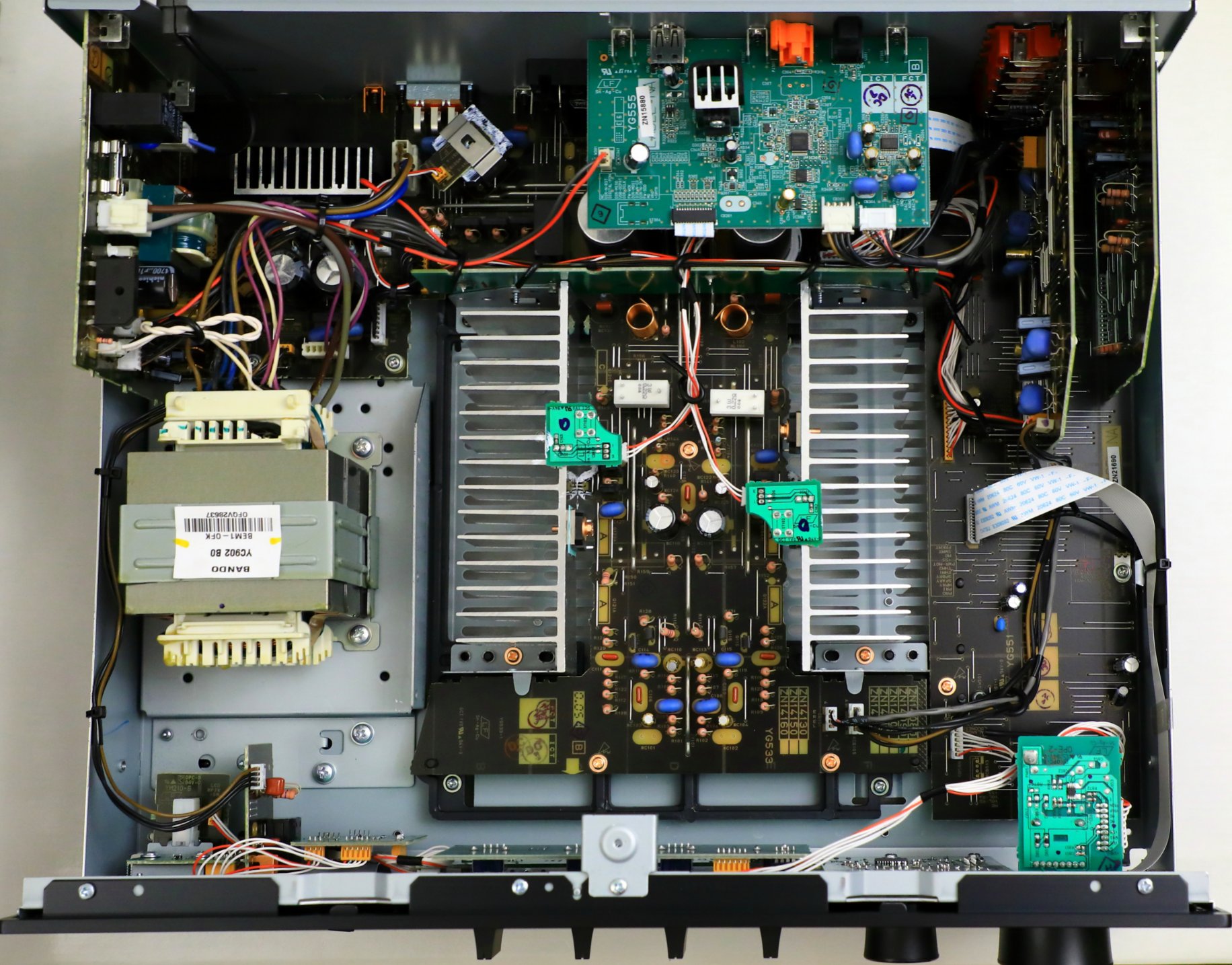 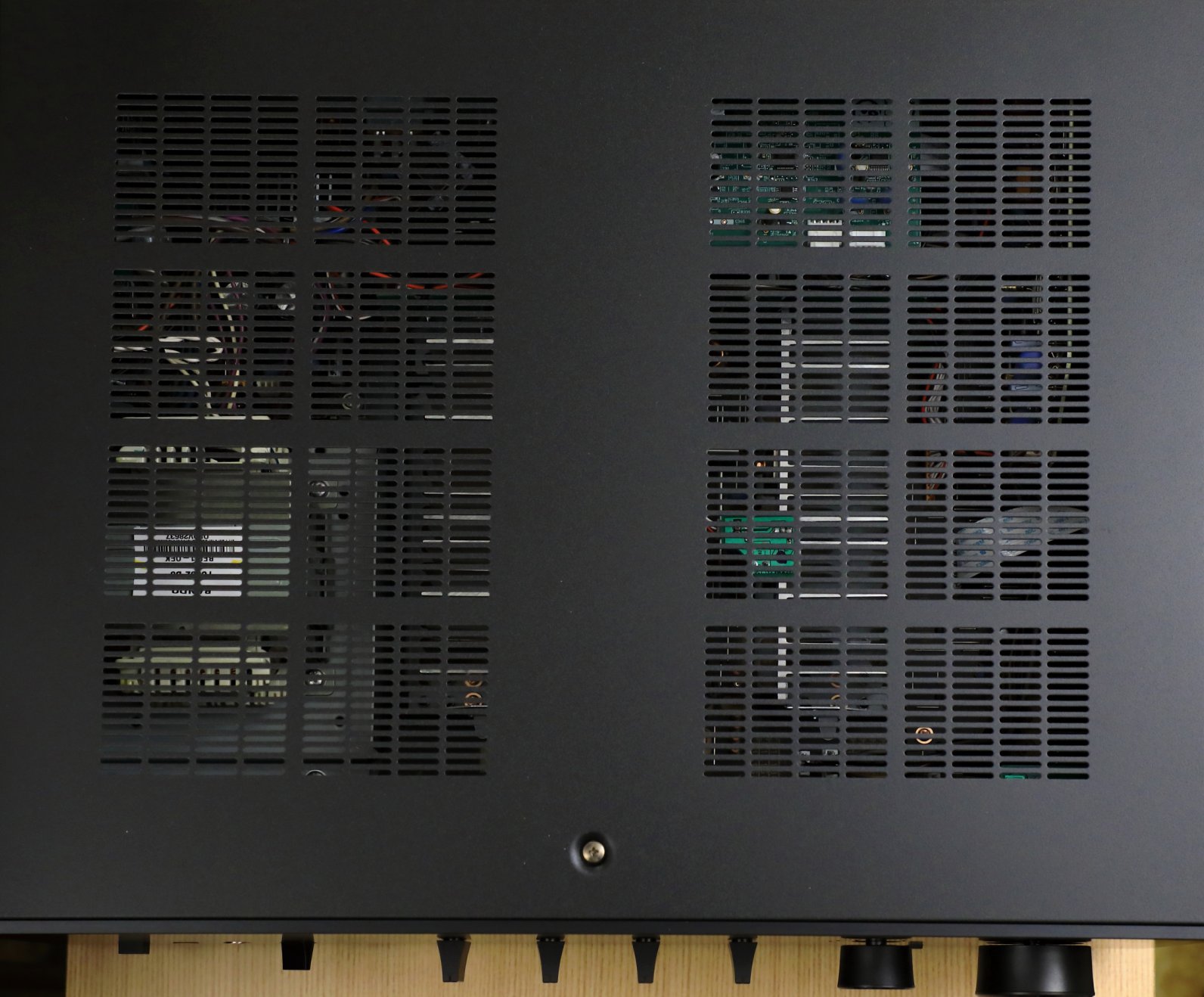 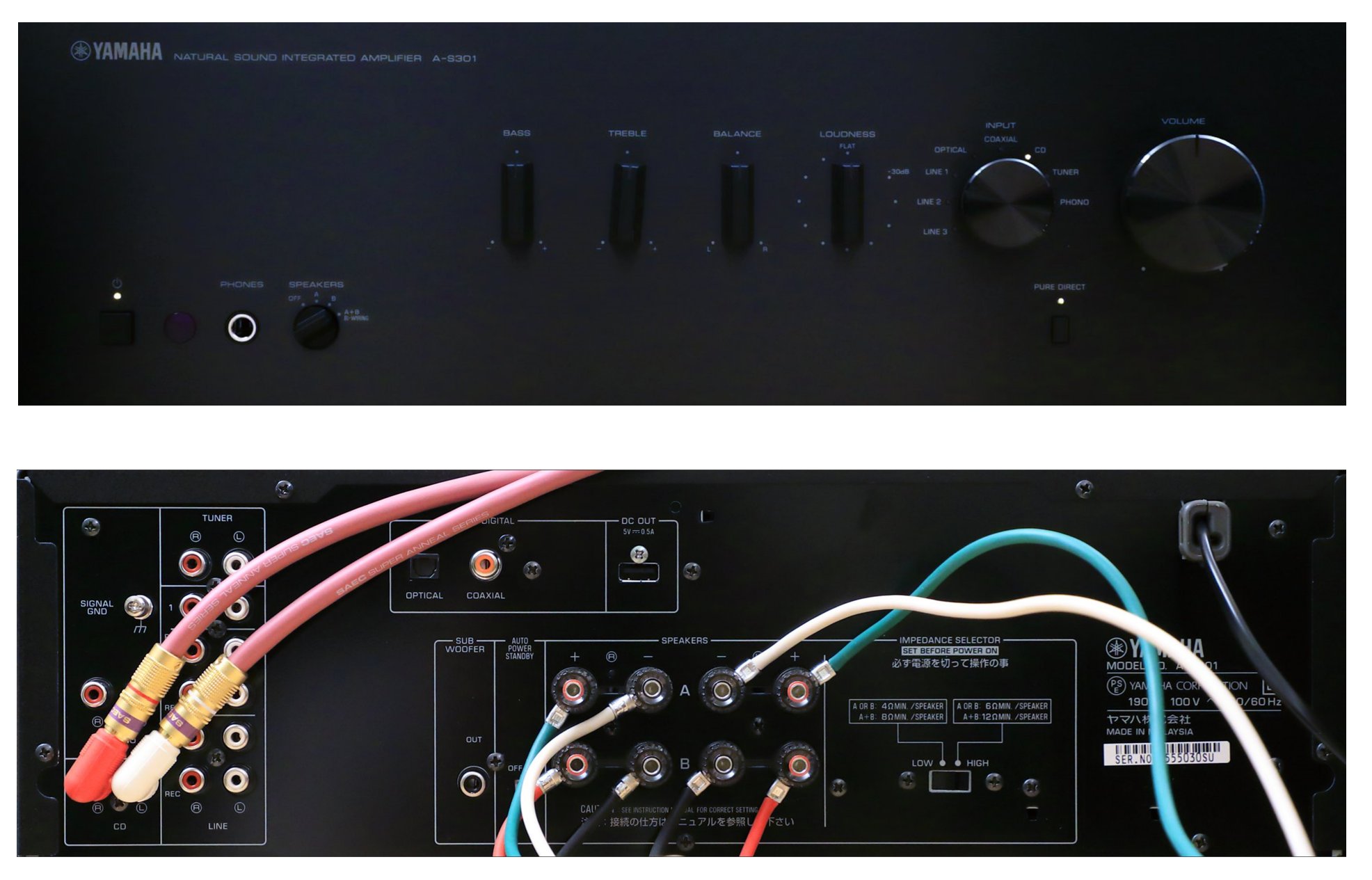