This is a review and detailed measurements of the Infinity RC263 center home theater speaker. It is on kind loan from a member. The RC263 costs US $268 on Amazon including Prime shipping.

The RC263 is too large for my photo booth so you have to settle for where I test speakers for listening: 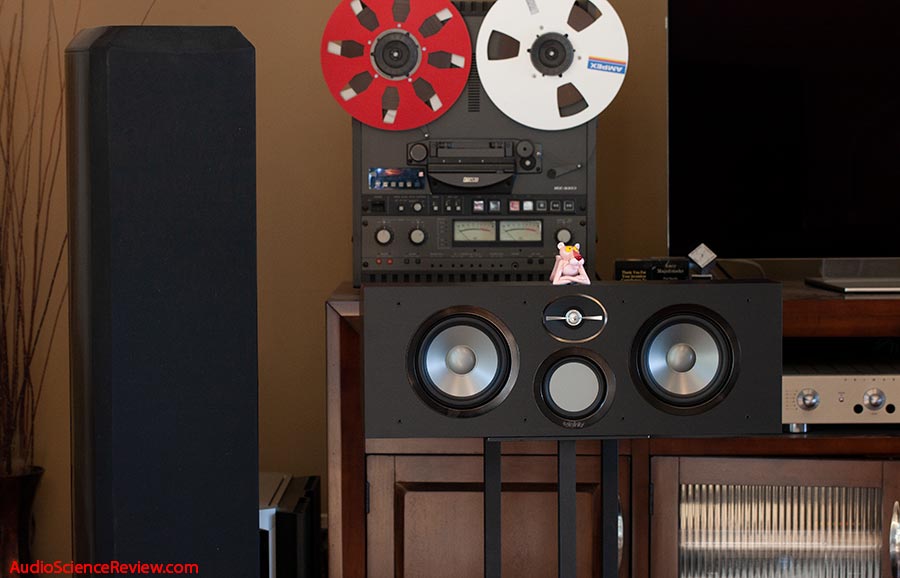 As you see the RC263 is a 3-way which is a recommended configuration for horizontal center speakers (two-way "MTM" designs tend to have poor horizontal direcitivty). Inclusion of two mid-woofers should help with power handling which is critical for center speakers as in movies most of the energy is directed at it (due to anchoring the screen). We will see this in measurements to follow.

Measurements that you are about to see were performed using the Klippel Near-field Scanner (NFS). This is a robotic measurement system that analyzes the speaker all around and is able (using advanced mathematics and dual scan) to subtract room reflections (so where I measure it doesn't matter). It also measures the speaker at close distance ("near-field") which sharply reduces the impact of room noise. Both of these factors enable testing in ordinary rooms yet results that can be more accurate than anechoic chamber. In a nutshell, the measurements show the actual sound coming out of the speaker independent of the room.

All measurements are referenced to the tweeter axis with frequency resolution of 2.7 Hz. 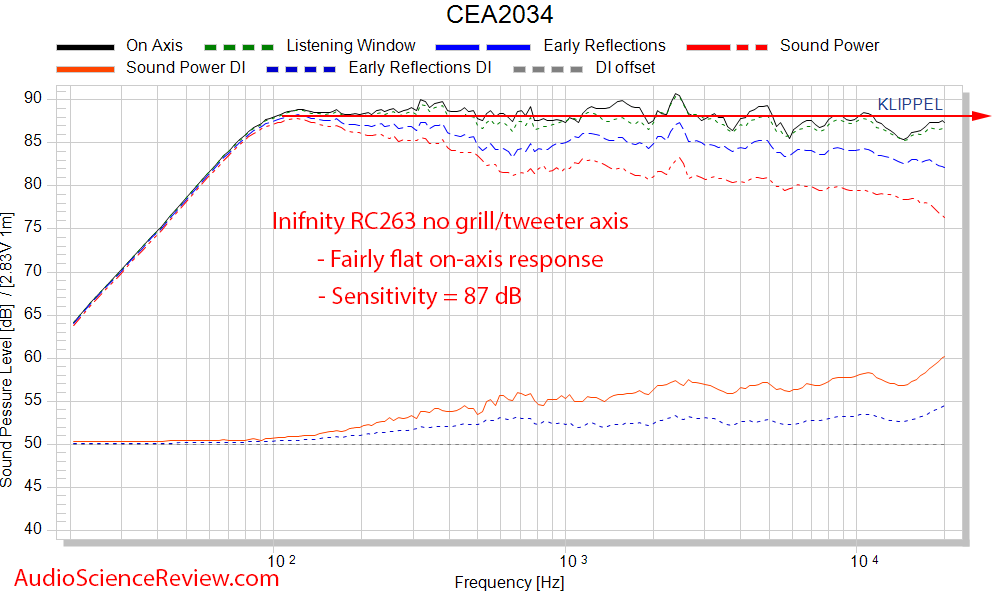 We want our "on-axis" to be flat as to not impart constant coloration on everything we play and this budget speaker manages to do that fairly well.

Sensitivity is a couple dB above average for bookshelf type speakers which is good.

Estimated frequency response (taking into account important reflections in a room) is very good as well: 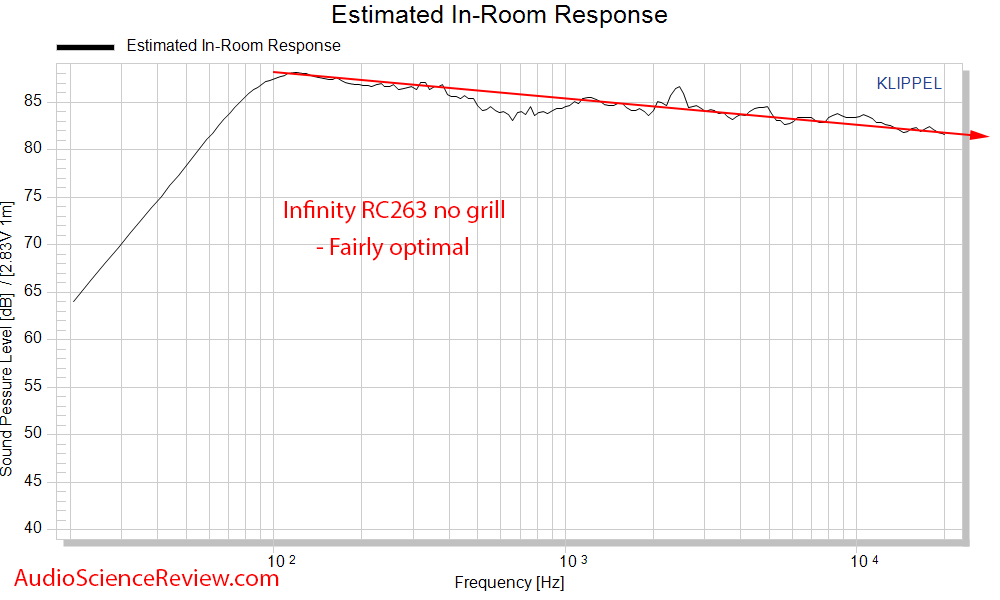 This due to early reflections working together to produce a smoother response than one would typically expect: 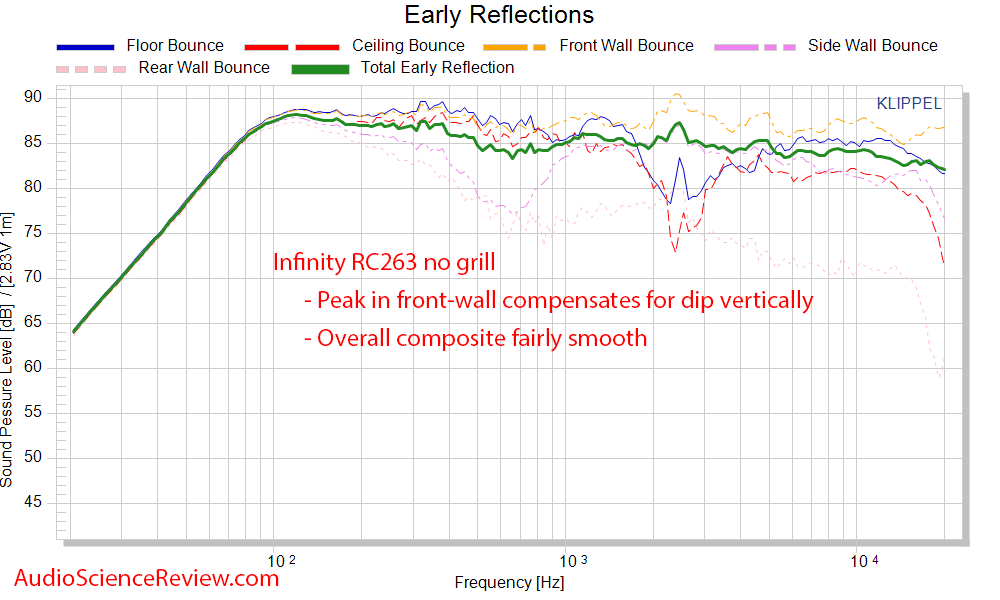 Here is the horizonta "directivity" which shows how the power of different frequencies drops off as you move away from the direct axis of the tweeter (left and right): 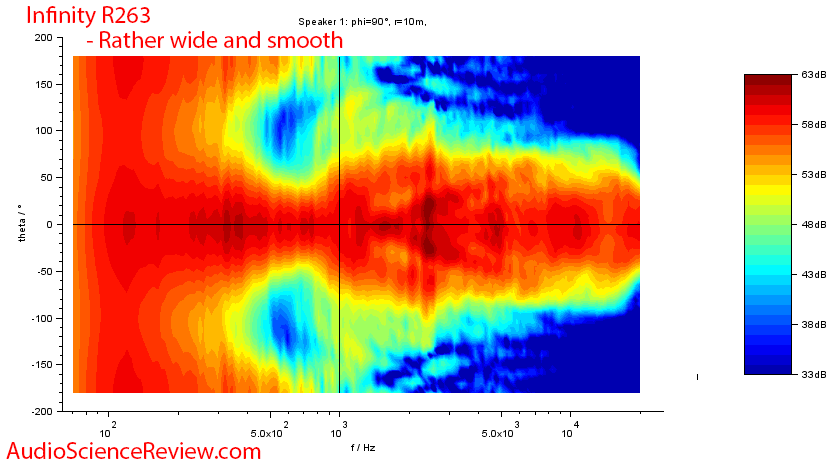 This is very good and broad which is what we like to see in a center speaker allowing for wide seating area and good side reflections.


Vertically it is a bit chewed up and narrow in mid-frequencies: 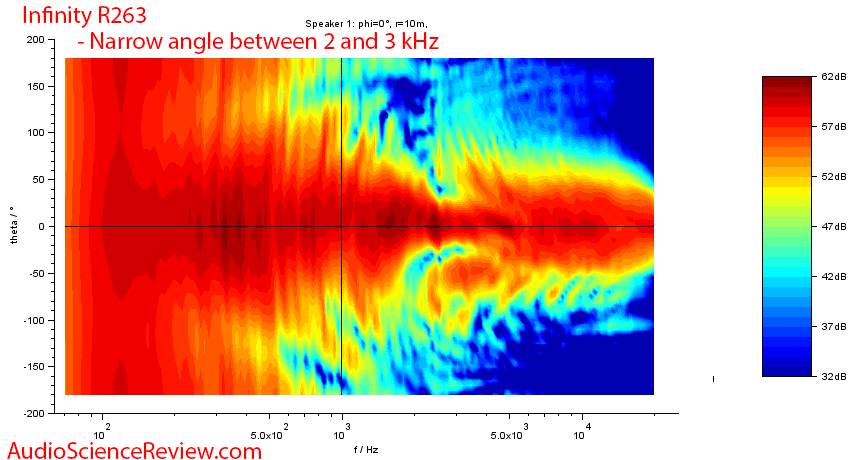 The cabinet on RC263 has dual angles so suggest using the back side which points the drivers up if the stand is too low (e.g. under a projection screen).

Distortion is rather high in the area of midrange and tweeter (infinity does not provide any crossover information): 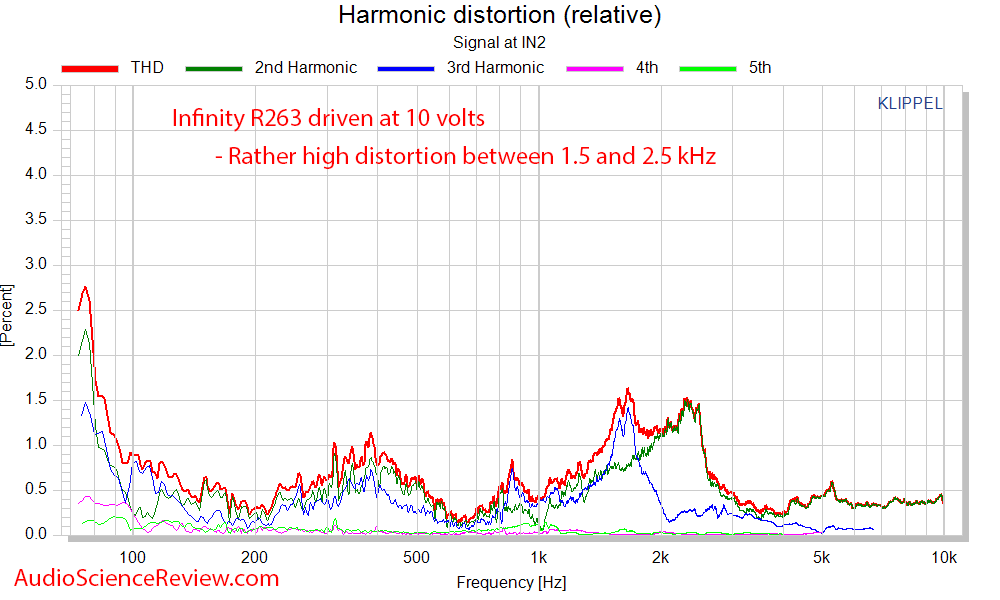 The increase distortion frequencies is rather broad which makes it easier to hit so likely is a much bigger problem than a spike here and there. I am tentatively setting a 0.5% as maximum acceptable for broad distortions and RC263 violates that fair bit, peaking to 1.5%.

Impedance in bass domain where most energy is dips to 4 ohm: 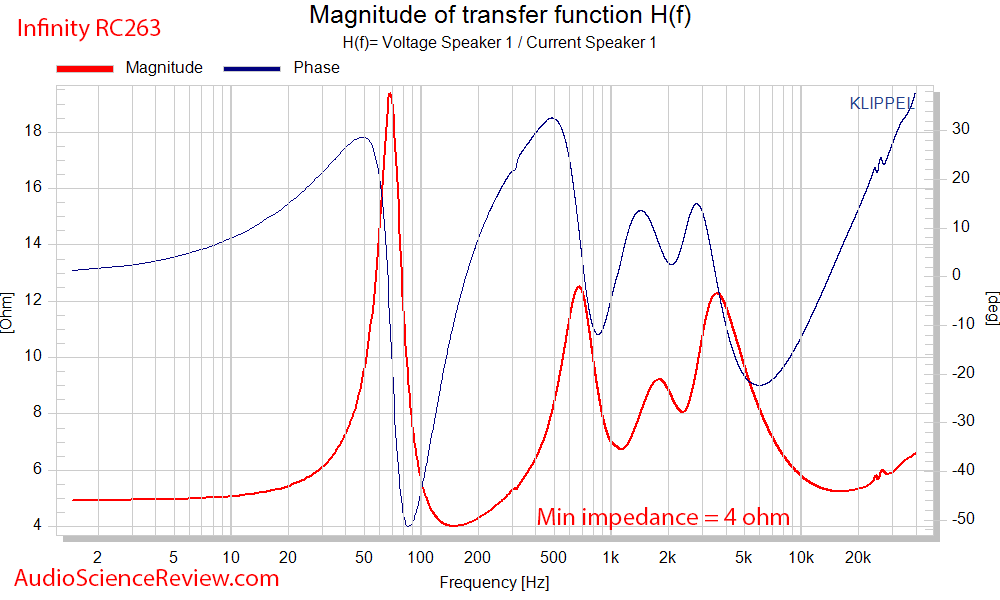 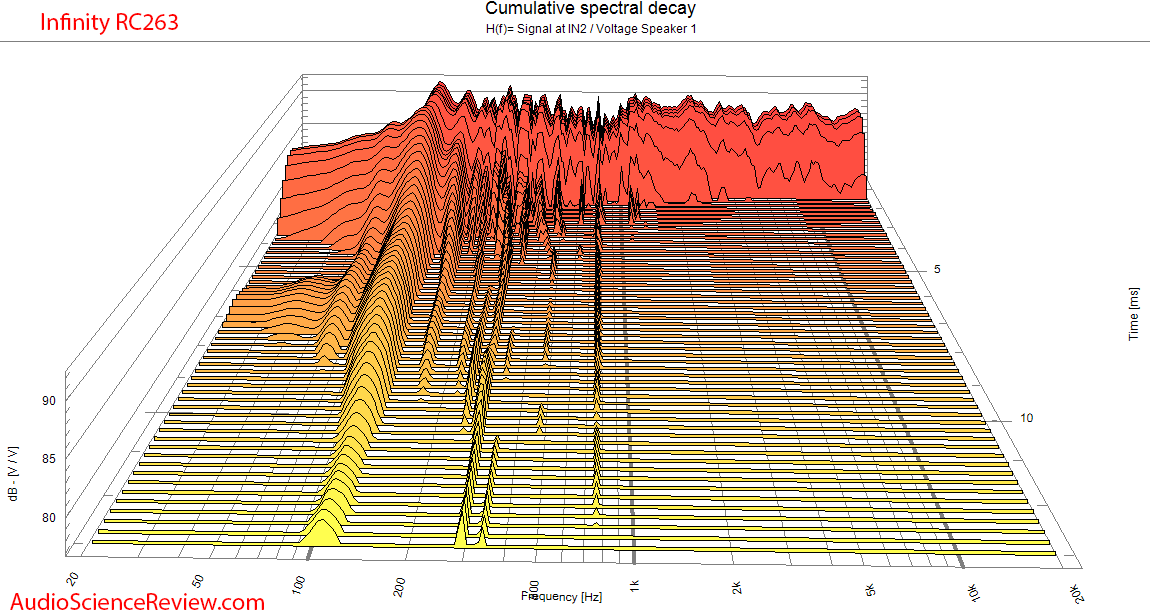 Speaker Listening Tests
First impressions were rather positive but after a bit, lack of bass performance made the overall experience rather bright. Dialing in a few dBs of bass boost cured that. To my surprise, this did NOT result in the drivers bottoming out showing the excellent power handling of the RC263.

It is said that the Infinity is the "baby Revel." To see if that is true, I put my Revel C52 speaker which costs US $2,000 in the same spot. Performance improvement was quite substantial. Bass had much more energy, able to energize my seat. But importantly, there was a ton of detail and ambiance which was lost with the Infinity RC263. I had my son with me for a second opinion and that was his impression as well without being prompted. Now, some of this may be sighted bias, and differences in frequency response or distortion. I don't have an analysis of that for you. But I can share that my reference tracks sounded much nicer with the Revel C52.

Conclusions
The Infinity RC263 has excellent objective measurements for a budget center speaker. They have tried hard to hit key aspects of good sound in a horizontal center speaker within a very tough budget. So unless you can afford to spend a ton more, the RC263 makes for a very good center speaker in a home theater, augmented by a subwoofer.

As such, I am going to put the Infinity RC263 on my budget speaker recommendation together with its companion, R162 left, right and surround speakers.

Went out yesterday with the Pink Panthers wearing their pink masks and everyone was starring at them! I asked one of them why and he said he had never seen a panther with a pink mask that I should have made them white ones! So now I have to buy new material for my wife to make more in white. Please help me with that expense by donating using : https://www.audiosciencereview.com/forum/index.php?threads/how-to-support-audio-science-review.8150/ 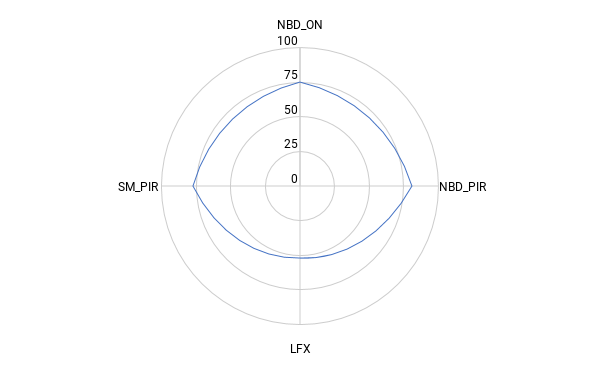 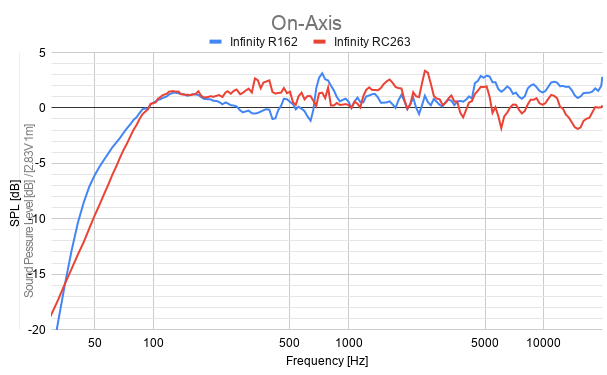 I have added the Infinity RC263 to Loudspeaker Explorer where it can be compared with other speakers.

Consistency within the listening window leaves a lot to be desired. People sitting at ±30° will have a bad time: 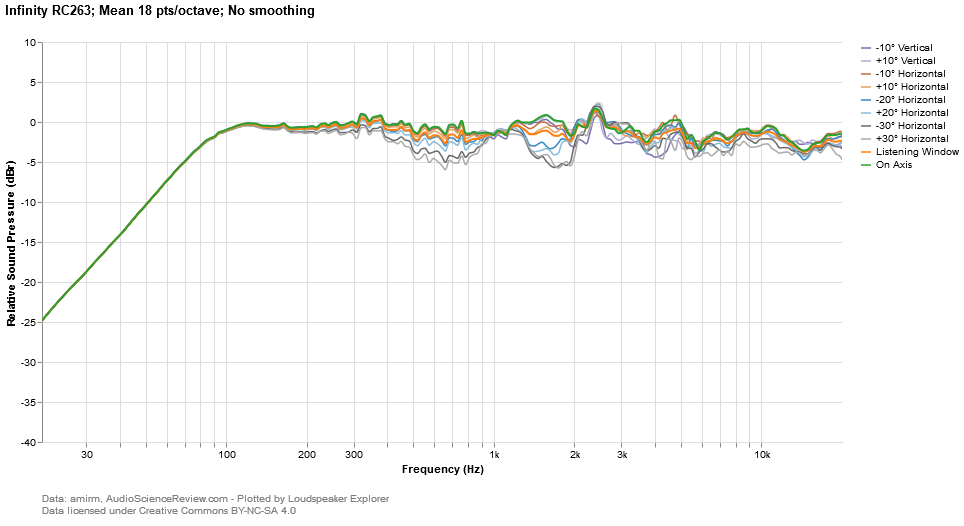 Looks like a great center speaker at a great price. good to know it can handle some volume too for HT use.
S

Another excellent review - thank you for it!

Would you recommend 3-way center channel speakers like this and your Revel C52 for a stereo pair?

I guess the bass performance leaves a lot to be desired without a subwoofer though but power handling may be great owing to the dual woofers.

amirm said:
I am tentatively setting a 0.5 dB as maximum acceptable for broad distortions and RC263 violates that fair bit, peaking to 1.5%.
Click to expand...
dB should be % instead?
S

The bass response between the Infinity RC263 and Revel C52 Amir compared it to seems almost identical. We can see this quickly and easily using the Loudspeaker Explorer! 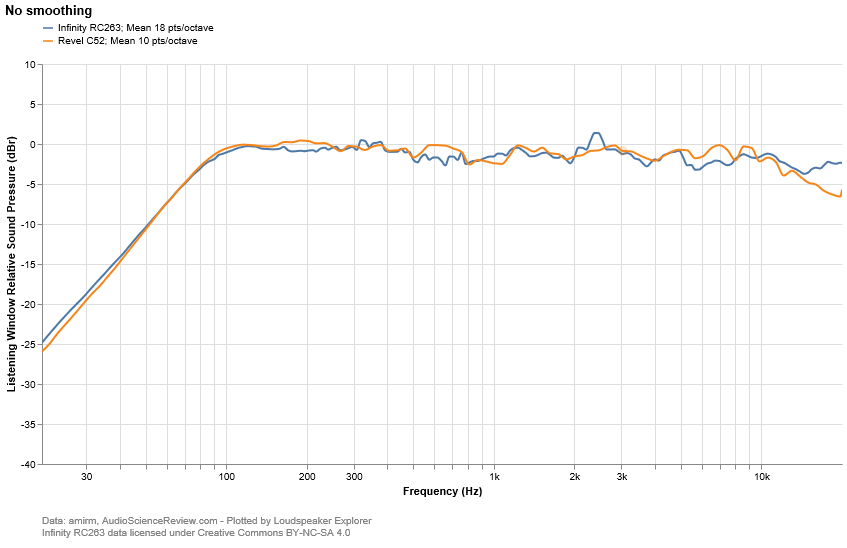 Paid $159 shipped from Harman for this during the last sale. I'll be keeping it and the R162's for my rears!
A

I purchased this center last month during Harmon sale. Voices are crystal clear even at low volumes. Spinorama is very good, especially for a center. Obviously outclassed by Revel Performa 3 way but better than any 2 way I have purchased previously. The 4 inch mid-range solves the problem of voice intelligibility at low, medium or high volume. No longer must boost the center to hear dialogue. After a few weeks I found this center does not fatigue.
W

Response flat all the way to bass

I think this (along with the previous reviews) shows why measurements are important. I myself also prefer a few dB worth of extra bass.
The hypocrisy in telling others "Just be yourself" is that nobody would say that to Hitler
A

Of course, eq integration of sub, mains and center with Anthem Room Correction made a world of difference.
A

I tried the RC263 and was pretty pleased, especially given the frequent sale price of $199 or less. It really seemed to open up at higher volumes but was a bit subdued at lower levels. I had an Emotiva C2 on-hand and tried them head to head, ultimately keeping the Emotiva C2 (which I run with my Revel F35 fronts) due to what I perceive as a bit fuller sound overall and larger soundstage in my room. I don't hesitate to recommend the 263 to others, however, and it blended perfectly with the Revel M16s I was running at the time.
OP

airs said:
Paid $159 shipped from Harman for this during the last sale. I'll be keeping it and the R162's for my rears!
Click to expand...
$159??? That is incredible.
Amir
Founder, Audio Science Review
Founder, Madrona Digital
Contributing Editor, Widescreen Review Magazine
Click for My Technical Background
My YouTube Channel
OP

spacevector said:
Would you recommend 3-way center channel speakers like this and your Revel C52 for a stereo pair?
Click to expand...
I did a test against my Revel Salon 2 and the tall vertical orientation of Salon 2 definite has value. I did not compare it to a 2-way though if that is what you are asking. In my theater I use three horizontal and for movie watching, it works well (keeps left and right out of the screen real estate).
Amir
Founder, Audio Science Review
Founder, Madrona Digital
Contributing Editor, Widescreen Review Magazine
Click for My Technical Background
My YouTube Channel
V

amirm said:
Distortion is rather high in the area of midrange and tweeter (infinity does not provide any crossover information):
Click to expand...
Vertical directivity give some clues about the crossover frequency, which appears to be about 2.5 - 3 kHz (slightly higher than in model R162).
Comparing RC263 distortion to R162, it seems it is NOT coming from the tweeter (providing it is the same in both models), the mid (RC263) and the woofer (R162) are to blame for.
Last edited: Apr 7, 2020
P

How audible is the distortion for this center and the bookshelves?

edechamps said:
I have added the Infinity RC263 to Loudspeaker Explorer where it can be compared with other speakers.

Consistency within the listening window leaves a lot to be desired. People sitting at ±30° will have a bad time:

View attachment 57547
Click to expand...
The horizontal polar looks good though. Would you explain this assertion a little more?
R

PBH said:
How audible is the distortion for this center and the bookshelves?
Click to expand...
All the research I have read would suggest that it is not audible at all in music and zero chance of audibility for a film. Or if it is audible, you would not see it as distortion but rather part of the sound sig. Also if you listen to electronic or rock or anything that already have has tremendous distortion already built in than forget about it.
Maybe, maybe on some things you might notice, again this is according to all the reading I have done. Speaker distortion is not the same as electronic equipment such as amps distorting.
As 1 subjective example, my R162 sound "cleaner and easier to listen to" than my KEF Q150. It is not subtle. High volumes are easy with the R162 and with the Q150 they just have a slightly tinny and wearing quality.
By the way the 4th and higher harmics are well suppressed. The 2nd and 3rd are considered essentially non-factors - even desirable for some (think tube amp and vinyl lovers)
"The loudspeaker is by far the weakest link in the reproduction chain. Unless you have really poorly designed associated equipment you cannot get significant improvement in accuracy by going to very expensive equipment. Marketing departments like to tell you otherwise. Hearing a change is not an indication of greater accuracy. Some products are designed to make an audible change so the customer will notice it. Other products rely on the power of suggestion which works the better, the higher the price tag." -LINKWITZ

PBH said:
How audible is the distortion for this center and the bookshelves?
Click to expand...
Infinity R162 has too high 3rd harmonic in a too wide frequency range, which is bad in my book.
RC263 has much smaller 3rd harmonic peak in a rather narrow frequency range, so no problems here.
A