This is a review and detailed measurements of the Ikea SYMFONISK picture frame speaker designed by Sonos. I purchased it a couple of days ago from Ikea store for US $199. Their website said they had 42 in stock so they are planning to sell a lot of them. That said, there was not a single person looking at their smart home/audio booth.

There are two styles of this, one with white background and another with the same inverted so looks mostly black: 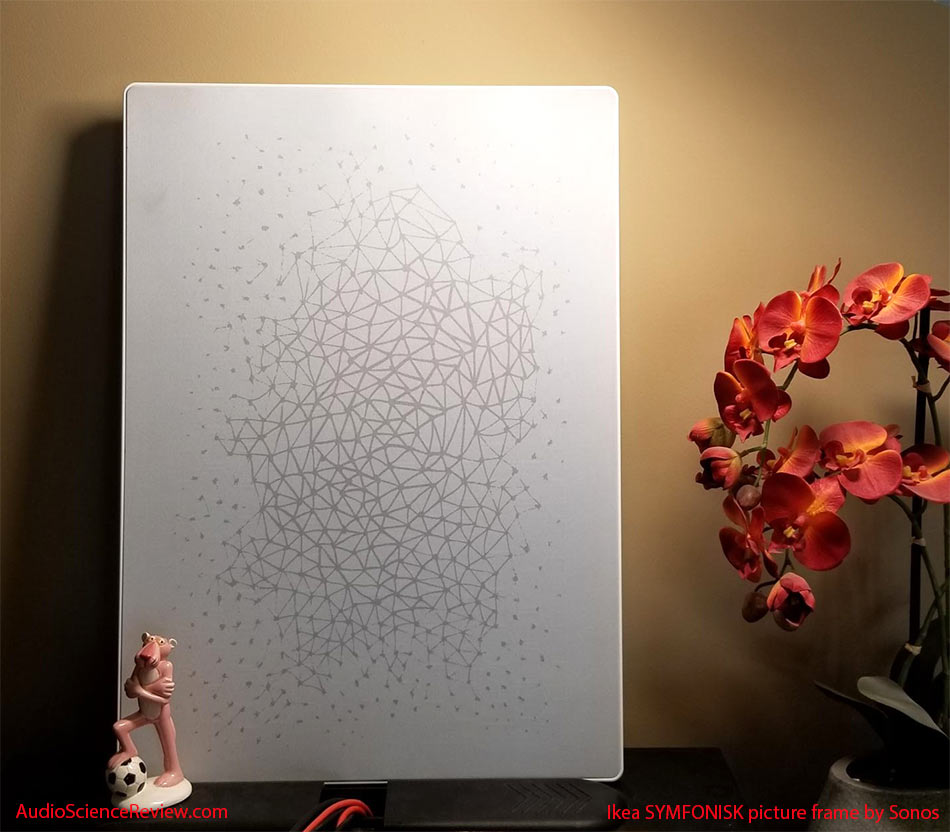 I have not looked to see how easy it is to change the fabric to something else.

There is some depth to the unit so unless you cut a hole in your wall, it will stand proud a couple of inches: 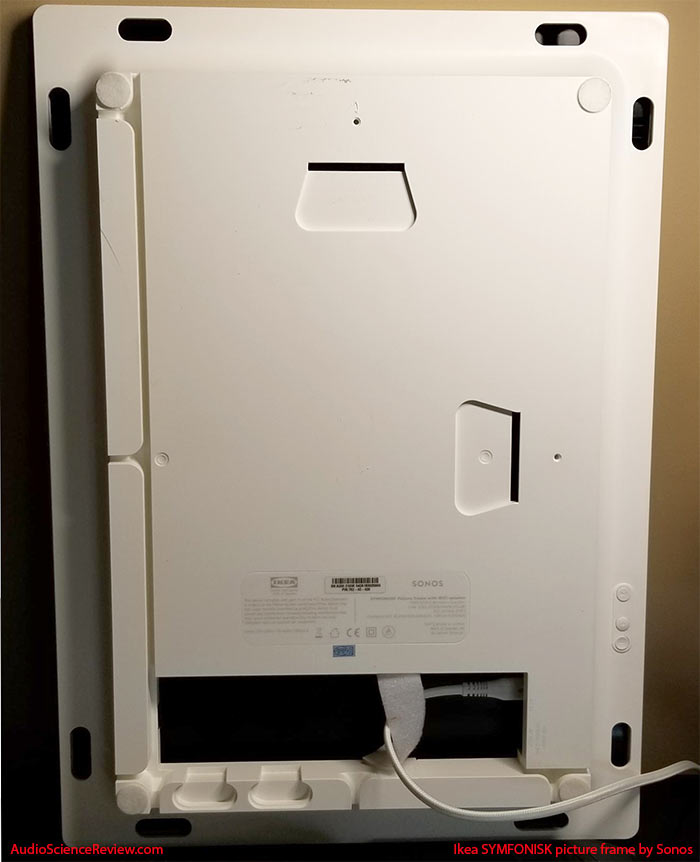 I liked the French cleat that came with it which I used to hang the speaker for measurements. Cable management is nice with that big hole where you can stuff the excess power cord. Interestingly, there is a pass through power plug so you can chain multiple while using one outlet. Smart!

Setup with these products as usual is hit and miss. The Ikea manual has no words in it, just pictures! So I go and download the Ikea app and naturally it can't find anything and keeps telling me In need one of their routers. My "Sonos 2" app did not work either. But there was another app called Sonos and that one did work. It uses NFS to auto-configure the speaker which was nice. But I did not appreciate that I could not just use the included Ethernet port and had to setup Wifi to use it.

The speaker exposes two protocols: Apple Airplay and Sonos. I could not get the latter to work with my Roon player but Airplay did and that is what I used for all of my measurements and listening tests.

There is some kind of honeycomb structure under the fabric. Even when shining light through it, I could not figure out where the drivers were. Listening by ear, I figured out that the high frequencies were coming out of dead center, vertically and horizontally, so used that for measurement reference point.

Since this speaker is meant to be installed on a wall, I spent an afternoon building a back baffle for it, hung it on Klippel NFS to measure, only to see nothing but garbage. This went on through the night until I realized that the special baffle measurement system from Klippel does NOT work for wireless speakers! Wireless speakers require asynchronous measurements where you play the tone in a music player, Roon in my example, and the measurement system attempts to figure out the timing using dual microphones. Well, this can't be combined with baffle measurement where the rear radiation is ignored. Klippel confirmed that this feature is not there but would be coming in a few months.

So I ripped out the baffle and just made a stand out of it to hold the speaker vertically on Klippel NFS platform -- not easy given the tiny size of the platform. Once done, the wall was the size of the inset in the back of the Ikea speaker so should not have created more diffraction than what it creates on its own edges.

Given the full 360 measurements, the data is not quite accurate for some of the measurements when you mount the speaker on the wall. So keep this in mind.

Also, the scan is slightly less accurate than typical due to lengthy process of measuring speakers asynchronously. Error reached about 2% in lower treble and kind of got out of control close to 20 kHz. 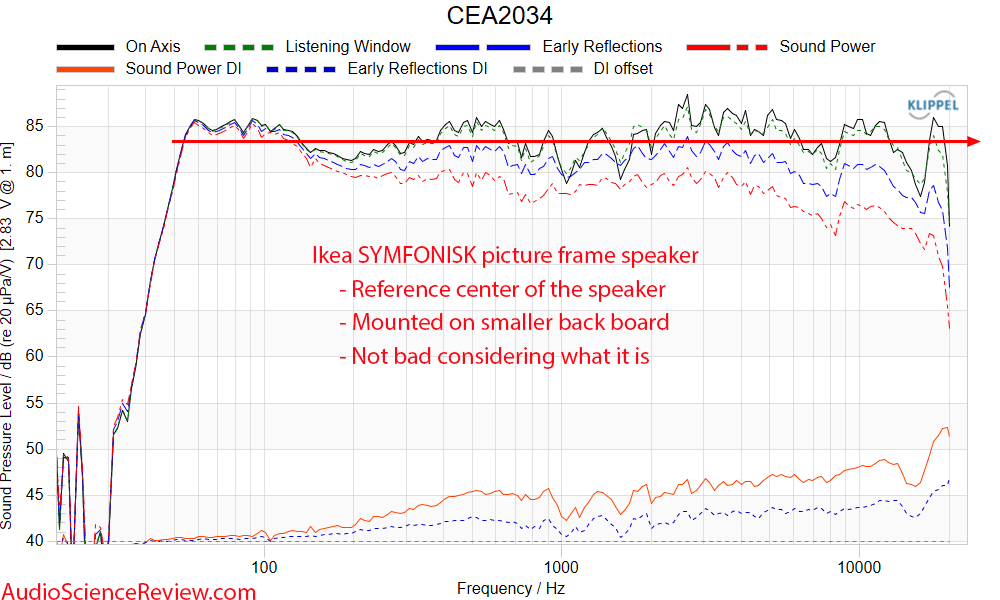 I expected a disaster but that is not what we have. Yes there are a lot of jaggies which can have any number of causes (plastic enclosure resonating, diffraction effects, etc.) but considering this is a lifestyle speaker, seems like good attempt was made to get an "even" response. Directivity looks good (see later graphs) as well. I don't have near-field measurements for you because I could figure out where anything was!

Early window is a graph that you need to look at with some caution given the fact that we are using a full 360 degree scan rather than 180: 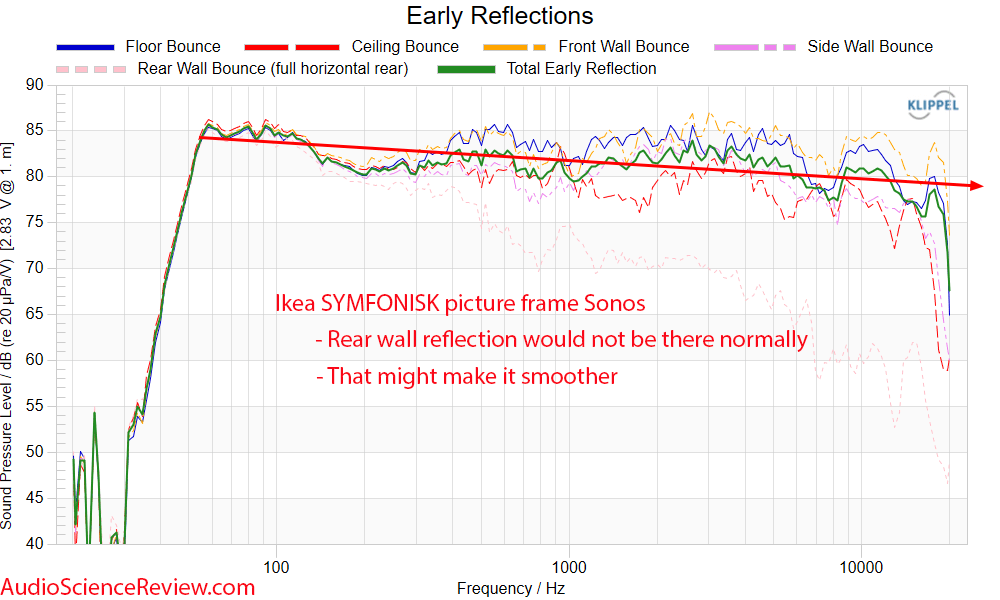 Putting the two together, we get decent predicted in-room response even though it too has some error in it: 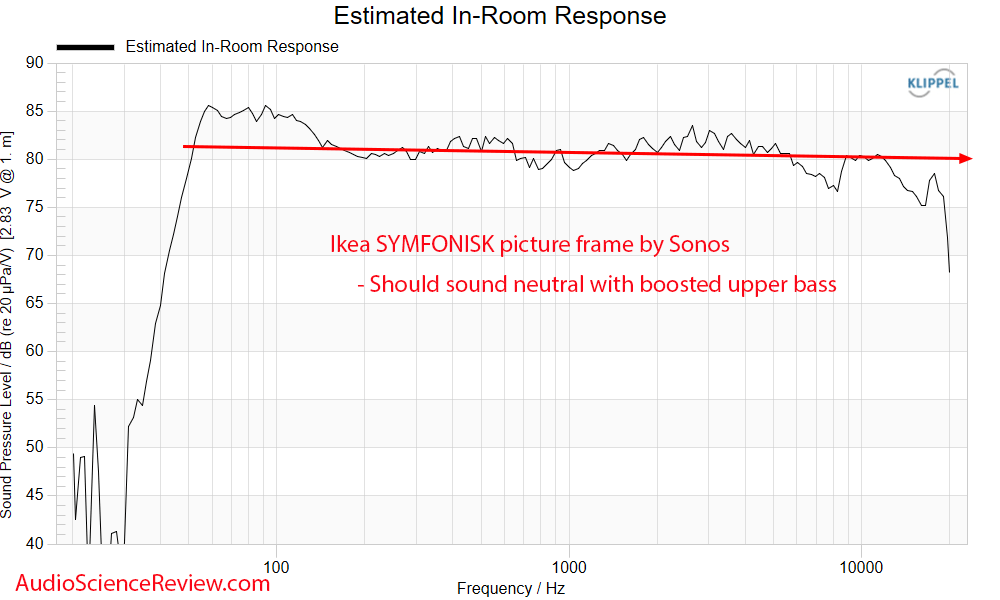 The bass drops like a rock so perhaps that extra peak was there to perceptually compensate for it. Or maybe reference axis will be different in use to make that less so. 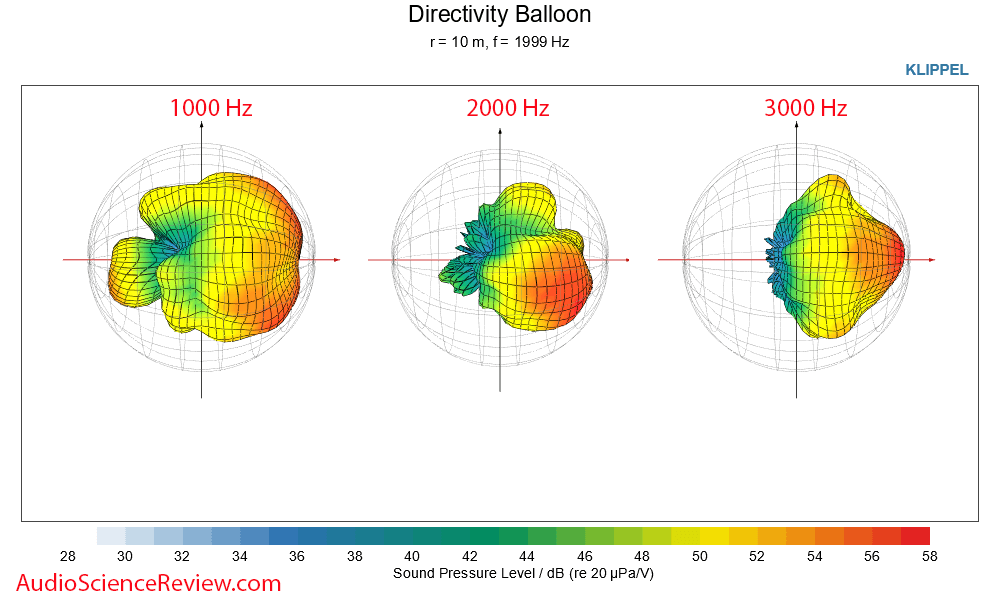 It is actually rather clean at 1000 Hz and especially at 3000 Hz. The latter shows that I picked the center of the high frequency radiation correctly more or less.

Beam width graph floored me with how good it is: 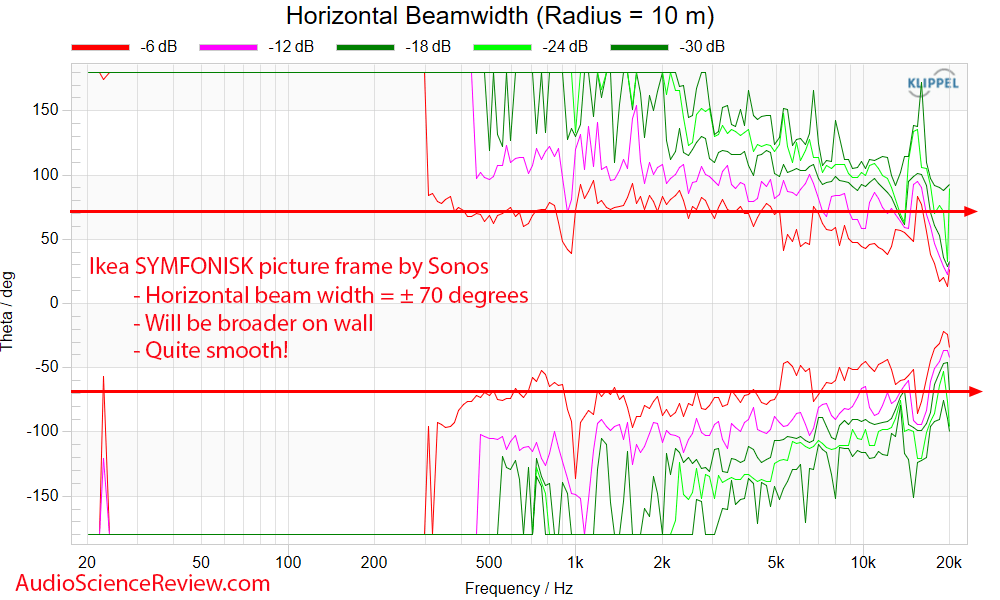 We are talking Pro level powered monitor level here! You can see the same in our directivity plot: 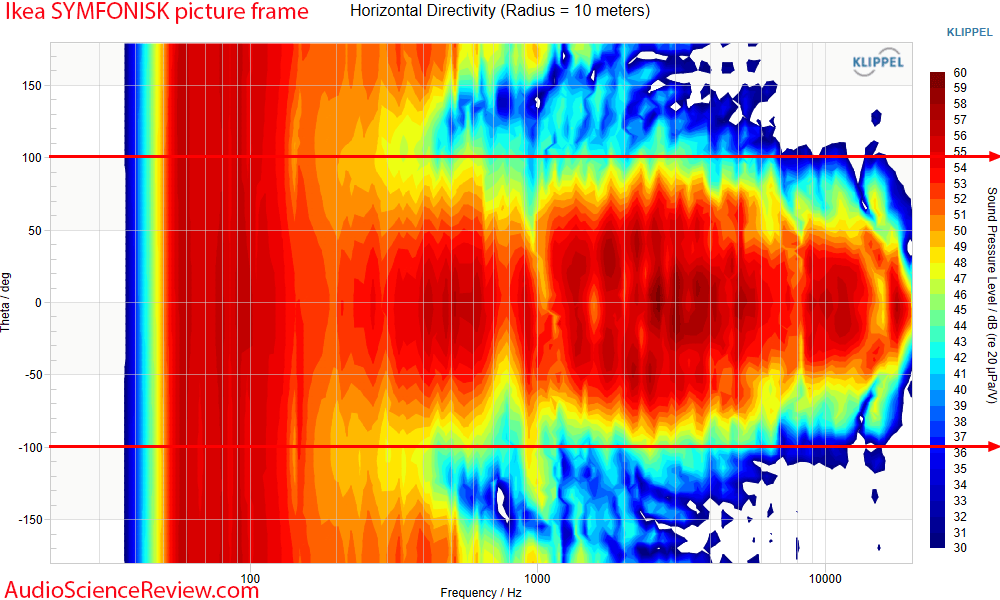 I have drawn two lines at ± 100 degree which is my estimate of how far back the angle goes before you hit a wall. Assuming so, this speaker will be omni directional up to about 6 kHz or so. And even that it still will radiate broadly, adding to its overall loudness and even distribution of sound.

Vertically the picture is complex: 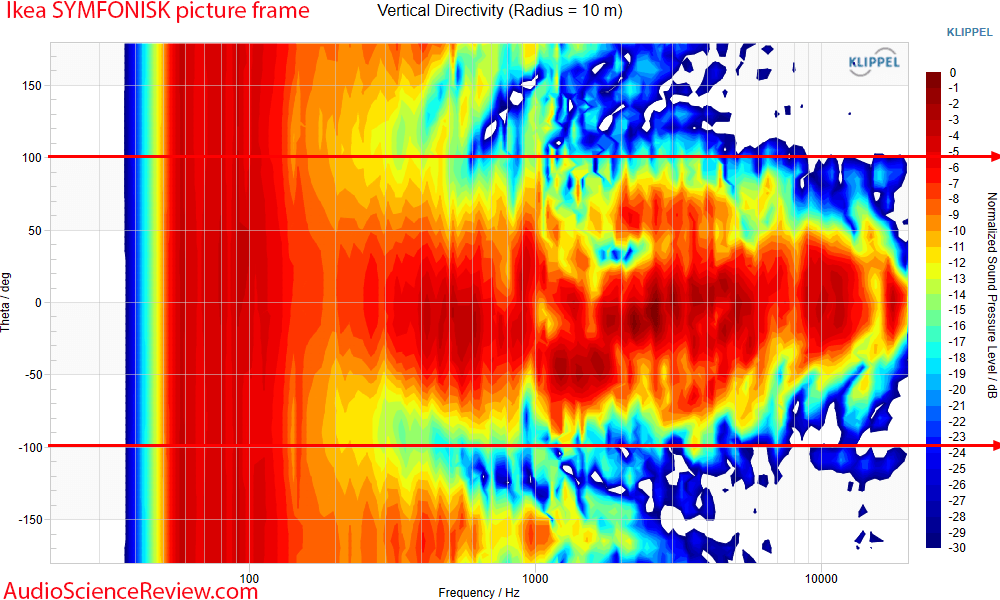 I have drawn the same lines for reference. I think we can say that it is also approximately omni even in that axis.

Here are our in-room measurements in near-field as far as distortion:

Can't figure out why THD between 1 and 2 kHz went down, instead of up as I turned up the volume. I wonder if it has some adaptive algorithm there. It is minor though.

Ikea SYMFONISK Picture Frame Speaker Listening Tests
I had two rounds of listening tests, one when I first configured the speaker prior to measurements, and another after. In the first round, I just had the speaker leaning against a coffee table. As soon as I played a track on it, I was shocked how good the sound was. Turn up the volume and it simply gets louder and that is that. It wouldn't get hugely loud but it never seems to show any signs of distortion. Overall tonality was very nice.

Post measurements, I went though my formal tracks using the positioning that you see in the picture above. One after the other, the sound tonality was close if not perfect. Dispersion was broad which gave a very nice feeling to sound. It is like an open window to what is playing. Everything was right so I felt no need to apply any EQ! As I type this, I am still listening to the speaker and don't want to stop.

Conclusions
Measurements of this speaker unfortunately is not quite the same as its in-use application. Still, signs of good design shine through in the form of great directivity and to some extent frequency response -- both on-axis and predicted-in-room. Subjective listening tests are even more impressive indicating either I don't know what I am doing when listening to speakers, or, wall mounting helps the response. Either way, there is some genius design at play here that is absent in other smart speakers I have tested and listened to. Considering that you can hang this on a wall and have it not look like an odd thing sitting some place, it is a major accomplishment.

Objective measurements don't fully support my highest honors but my listening test results do. So it is my pleasure to give a strong recommend to Ikea SYMFONISK picture frame speaker by Sonos.

Not going to steal pictures made by other sites, but there's pictures of the driver and bass reflex position out there.
The front grill can be pulled from the unit without damage by the way. IKEA is bringing out several designs you can buy to replace your current grill.
In portrait: the tweeter is dead centre, the woofer just above it, the exit of the bass reflex port on the right-top with a rounded rectangular pipe going down.
OP

Ah, the panel was easy to pull off. You just push through the back holes: 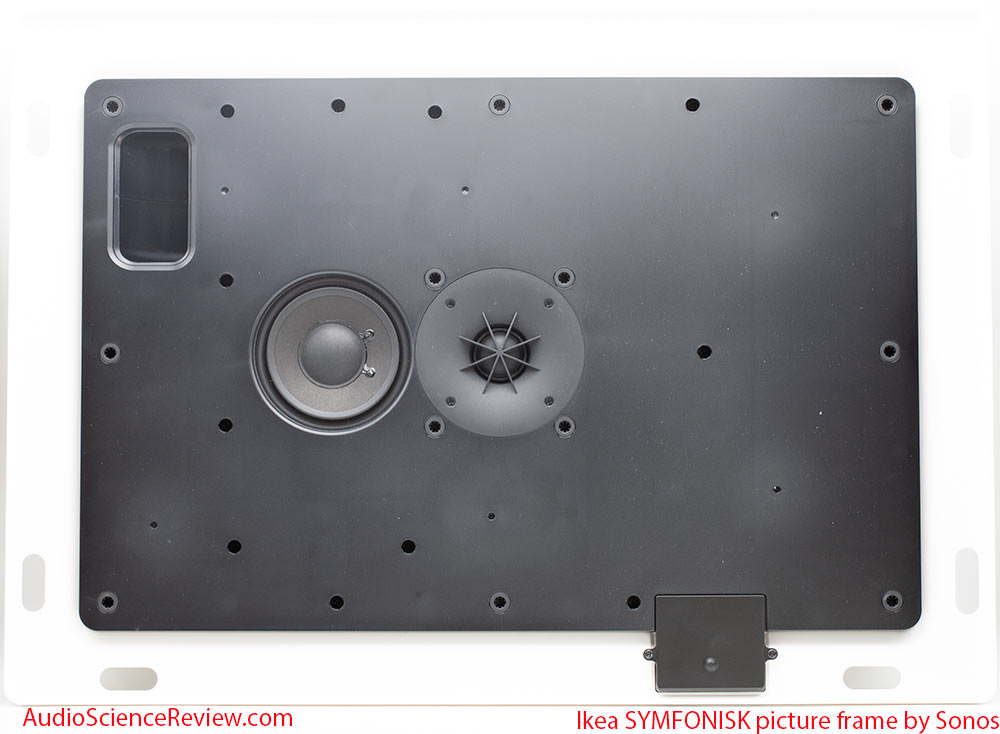 Propheticus said:
Not going to steal pictures made by other sites, but there's pictures of the driver and bass reflex position out there.
Click to expand... 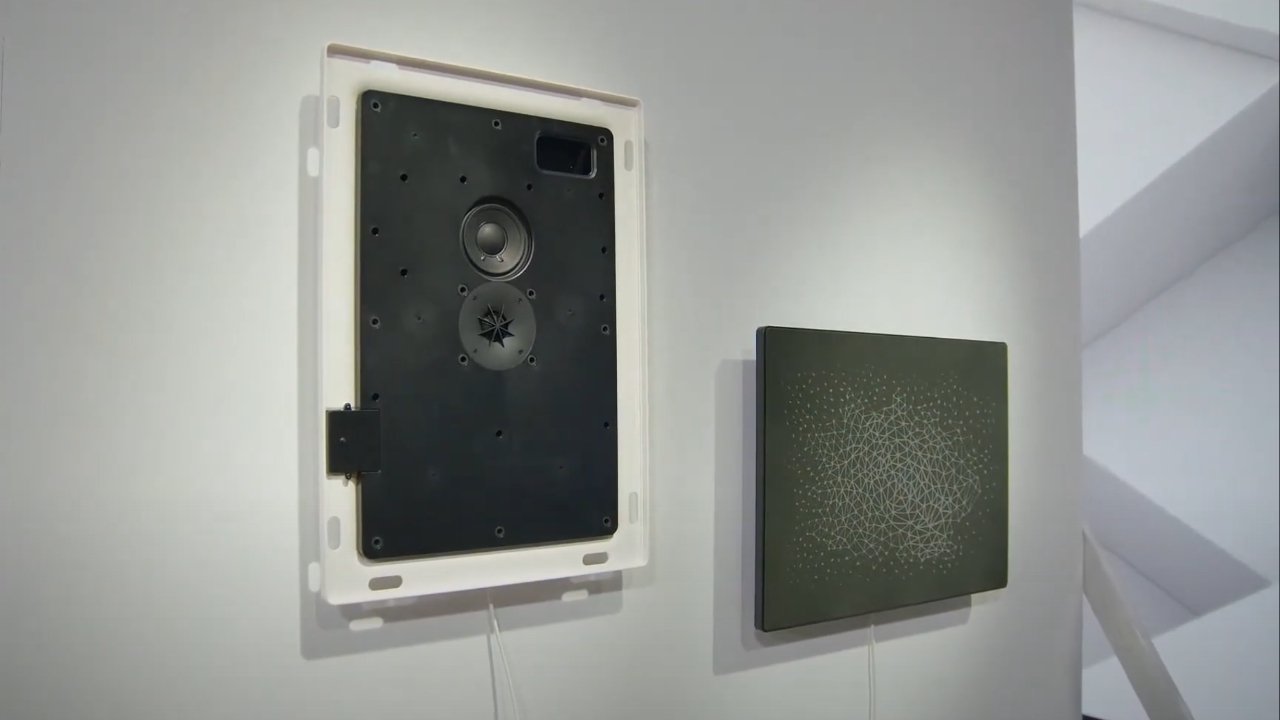 Surprising... but then not. Sonos is on the next level above most "lifestyle" speakers, with some models competing well against enthusiast speakers at similar (and higher) price points.

Propheticus said:
Not going to steal pictures made by other sites, but there's pictures of the driver and bass reflex position out there.
The front grill can be pulled from the unit without damage by the way. IKEA is bringing out several designs you can buy to replace your current grill.
In portrait: the tweeter is dead centre, the woofer just above it, the exit of the bass reflex port on the right-top with a rounded rectangular pipe going down.
Click to expand...

I'm actually impressed, that is a lot better than I expected. And it also seems to be able to play at a decent playback level.
"Human beings are poor examiners, subject to superstition, bias, prejudice and a profound tendency to see what they want to see rather than what is really there." - M. Scott Peck

"Man does not see reality as it is, but only as he perceives it, and his perception may be mistaken or biased." - Rudolf Dreikurs
E

Surprising indeed! Got to check my local Ikea store. Connectivity seems to be a problem though. (edit - not available)
Thanks for the review Amir.
OP

Man, that main woofer is tiny at 3.5 inches/9 cm. Wonder if it uses some kind of transmission line to get that low.

Do you think I can use these as rear channels and Atmos speakers?
Topping D30 Pro -> Topping A90
DCA Aeon X Closed, Sennheiser HD600, Moondrop Blessing 2

NoteMakoti said:
Do you think I can use these as rear channels and Atmos speakers?
Click to expand...

How would you connect them to an AVR?

Was thinking this speaker might have been developed by the folks at oda.co

Would be cool to see their's tested on the Klippel too... 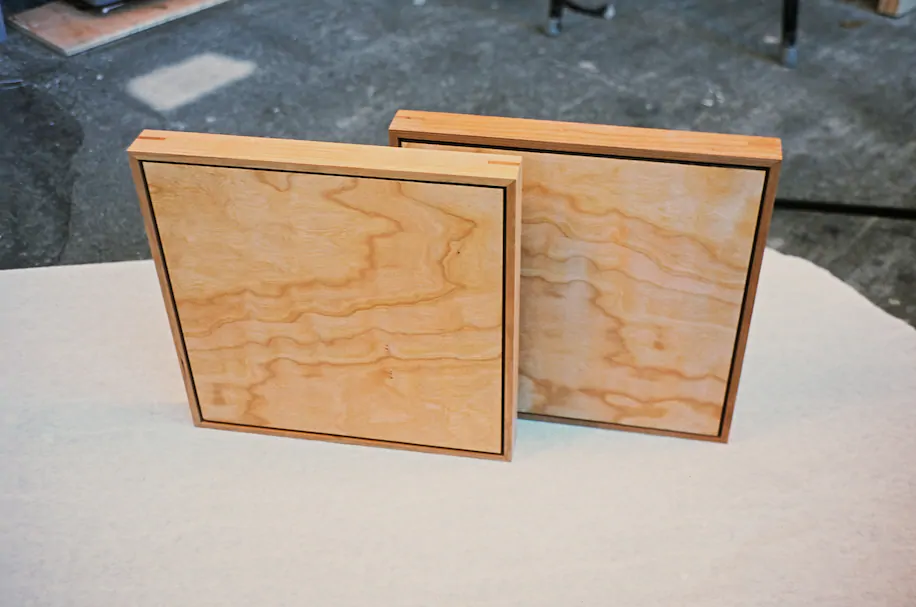 Supposed to be an ironically smiling emoji at the end of that.
M 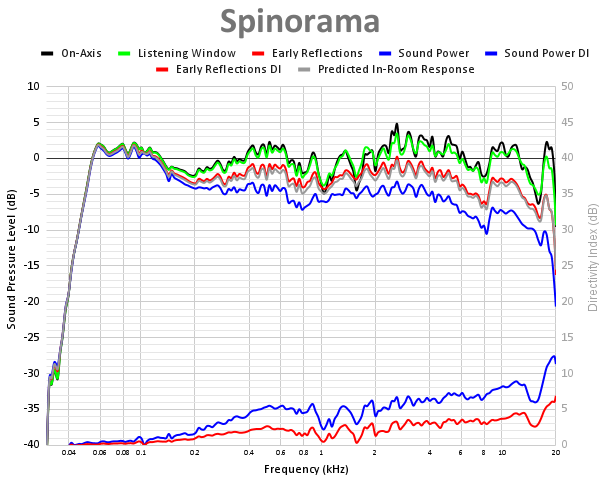 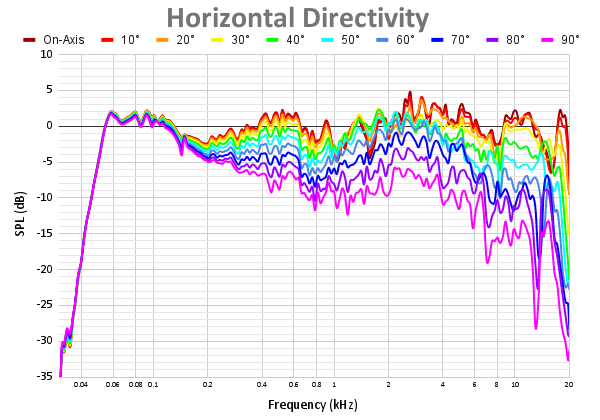 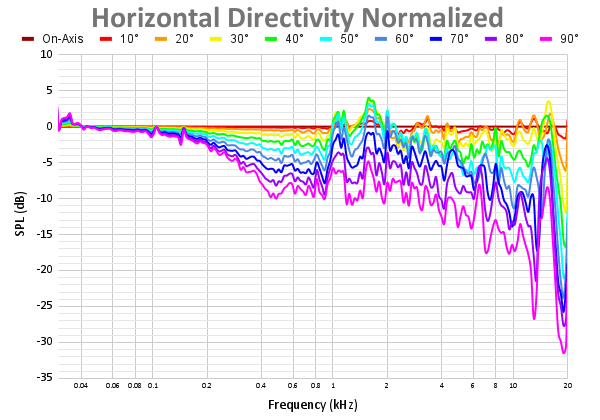 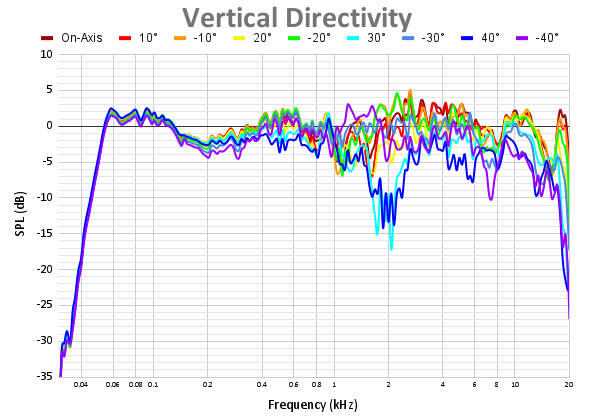 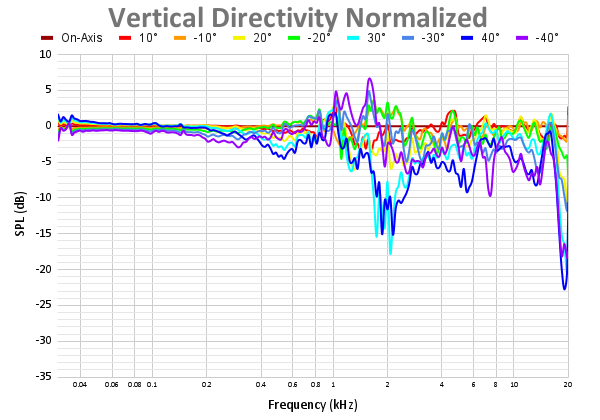 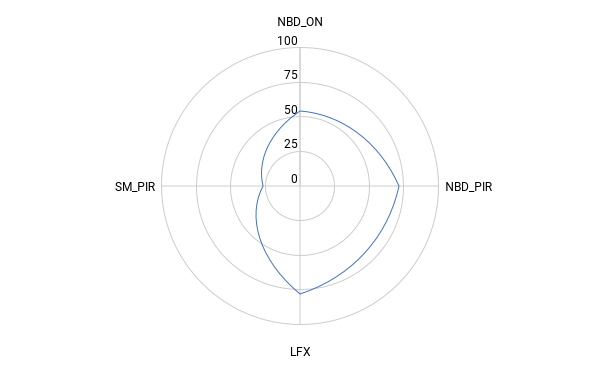 This is a pretty great measurement. I wonder how much better it could be with EQ?

NoteMakoti said:
Do you think I can use these as rear channels and Atmos speakers?
Click to expand...

You could use them with one of the Sonos soundbars (eg Playbar) and set them as surrounds. Or use em with the Sonos amp.
Atmos... don't think so.
T

Also, as an aside this could make some amazing Atmos height channels while fitting into whatever room's decor your in.
You must log in or register to reply here.