How can I rip the Eagles - Hell Freezes Over DVD to lossless audio tracks?

However, it is being said, that the audio on the DVD of that release is of higher quality than, what is on the CD.

So, for comparison I would like to rip the audio from the DVD to a lossless format.
But I'm not sure how to do that without actually loosing the prime information contained in the raw PCM audio on the the DVD.

It seems to me, that most rippers will "interpret"/modify the data and redecode it.

PS: Wondering why there are no hi-res downloads of the acoustic Hotel California-track on Hell Freezes over recorded at Warner Burbank Studios.
S

There are numerous tools that would do that. DVD Audio Extractor is one I've used previously.
https://www.dvdae.com/

Don should give me love... I bought two of those DVDs... and most every other thing he has ever done.
S

Do any of those really decode the DTS 5.1 audio?
I've used ffmpeg and DVD Audio extractor. I just didn't know they could do that.
C

sritacco said:
Do any of those really decode the DTS 5.1 audio?
I've used ffmpeg and DVD Audio extractor. I just didn't know they could do that.
Click to expand...

It doesn't matter how much "product" you've bought from Mr. Henley. He wants you to keep paying and paying until it hurts.
S

It doesn't matter how much "product" you've bought from Mr. Henley. He wants you to keep paying and paying until it hurts.
Click to expand...

I'm going to have to try extracting it now that I know...
A

You should try the DVD Decrypter. It's old but effective. You can rip all audio tracks divided by chapters.
OP
M

Thank you for your replies! Sorry for the late response. For some reason I didn't get email notification about the replies, so I thought my thread was dead on arrival

First a disclaimer: I'm not trying to rip Don Henley off, just rip the DVD's audio
I have purchased and paid for both the CD and the DVD, and I have no intention of passing on the ripped audio tracks to anyone, just listening to the over a separate DAC.

I would love for Don Henley to release Hi-ress downloads / SACD version of the album, and I would be happy to buy it!

I've gotten a few suggestions, that I will check out: DVD Decrypter (sounds amazing with audio tracks divided by chapters, @adlervft !), DVD Audio extractor and ffmpeg (which I'm a bit uneasy about if I can figure it out).

But as far as I can tell, all of them have notable audio quality loss, when they produce the FLAC.
It's like they are making processing in a low quality and then just saving it as FLAC.

I could be wrong, and I could very well be using the tools wrong!

But when I make an MKV-file of the DVD using passthrough of the raw PCM audio, I get the original sound.
I just can't find a way to get from the MKV to FLAC files without quality loss.

I'll see if DVD Decrypter, DVD Audio Extractor or ffmpeg can do the job!

PS @sritacco: From what I heard, it's the PCM audio on the DVD, that has optimal audio quality, not the DTS 5.1. But it's just what I have seen mentioned in other threads/forums.

mashdk said:
audio on the DVD
Click to expand...

As others have suggested, this should work well, they have a free 30 day trial too...

JSmith said:
As others have suggested, this should work well, they have a free 30 day trial too...

DVDAE works very well on DVD-Audio discs! I've used it for that. I extracted the stereo audio for Heart Of The Matter 20 years ago because I just couldn't live without being able to play that without the DVD. I don't remember the process I used at the time, but I've had that extra track inserted in my rip of Hell Freezes Over for a long time.
OP
M

Thanks everyone!
DVDAE works like a charm! Looking forward to listening to the results.
@sritacco I can select the DTS 5.1 and export to FLAC too, if you want to try that out
S

I will... I have a DTS 5.1 CD of Don Henley's The End of the Innocence that I'm going to try also. It will be great to have both as 5 channel flac. I setup Roon a few days ago and now I'm in 5.1 audio nirvana, able to play 5.1 flac and dsf files (transcoded on the fly to pcm). I was very skeptical about Roon because paying a subscription for software to play my own music seems kind of insane, but I must confess to being impressed. It basically upgrades me from Sonos Connect and "seedee" quality audio to now being able to play all high res formats in multi-channel. All for the cost of a NUC off ebay and an hdmi cable to my AVR. I sure wish there were more good 5.1 content!

I don't think any DVD has linear PCM audio on it does it? There have been everything from MP2 to MP4 but I think all are lossy encoding strategies.

Frank Dernie said:
I don't think any DVD has linear PCM audio on it does it?
Click to expand...

It can... generally this is the reason;

Because PCM, being uncompressed, requires a lot of bandwidth and DTS is not universally supported by players, AC-3 is the most common digital audio format for DVDs, and 96 kHz is rare on a DVD.
Click to expand...

DVD-A and combined two sided discs however are different;

Frank Dernie said:
I don't think any DVD has linear PCM audio on it does it? There have been everything from MP2 to MP4 but I think all are lossy encoding strategies.
Click to expand...

When I did the extract 20 years ago, I'm pretty sure the end result was 16-bit 48kHz without transcoding. At the time I turned the wav file into an mp3 for a smaller file size but kept the uncompressed version on my hard drive. This was before Apple lossless and Flac....
S

Frank Dernie said:
I don't think any DVD has linear PCM audio on it does it? There have been everything from MP2 to MP4 but I think all are lossy encoding strategies.
Click to expand...

This screenshot is VLC's codec-info on the MKV-file I made from the DVD using MakeMKV.
For the audio, I chose Passthrough, so that it is unaltered from the disc. As you can see, it is araw codec.
(Sorry for the Danish VLC-version, but codec-part is the same 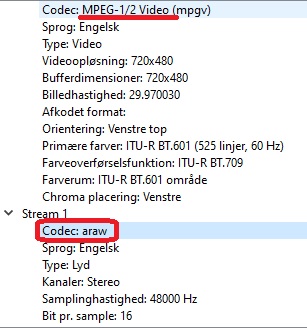