This is a review and detailed measurements of the Hifiman Ananda open-back, planar magnetic headphone. It was kindly sent to me by a member and costs US $700 on Amazon including Prime shipping (retail $999).

This is one massive headphone! 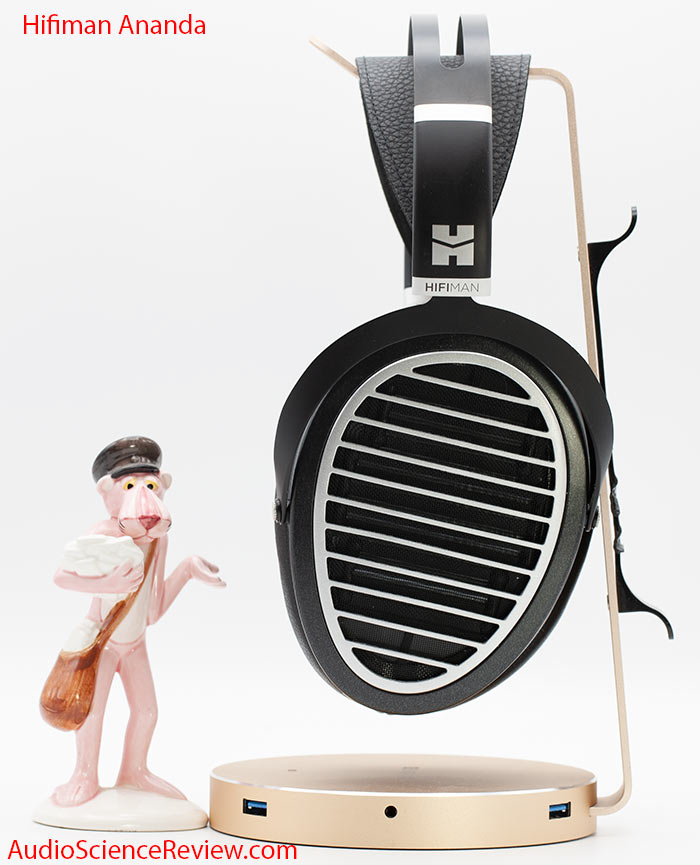 As you see, it dwarfs the panther next to it. For both testing and listening tests I had it in its lowest setting. It fit me but if you have less tall head, then it may not on you. Good news is that the Ananda is extremely light for its size, coming at 410 grams. As you see, the cup is oval so while the height is 88mm, I can't give you an exact width of the inside of the cup. I measured it more or less at 57mm. Depth to the dust cover is 17 mm.

Comfort was excellent despite the large size. I quickly forgot about them after a few minutes.

Mounting the headphone on the text fixture was easy requiring almost no manipulation to get proper measurements. However, I noticed a gap on both cups facing forward. There is a depression there. Pushing the cups closer to the side of the rig pushed up the level of the bass resonance you see below but kept the bass roll off essentially the same. So I did not deem it significant.

Hifiman Andanda Measurements
As usual, we start with our stereo frequency response measurements: 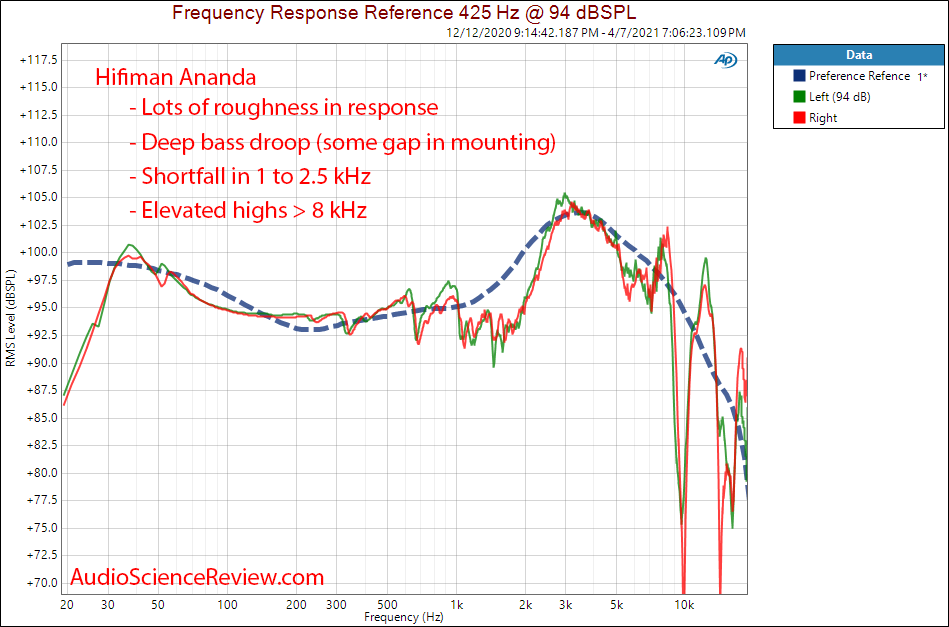 Staying at high level first, we see the aforementioned sudden drop in sub-bass starting at 40 Hz and going down. Otherwise we have more or less our preference curve until we get to 1 kHz where we see the all too common shortfall. This continues to 3 kHz then we are OK until we notice the peaks exceeding our preference curve starting at 8 kHz or so.

At more focused level there are a ton of variations and kinks in the response. It seems the headphone/driver are going through many distortion mechanisms due to resonances, reflections and general driver issues. We can see the chaotic aspect in group delay graph: 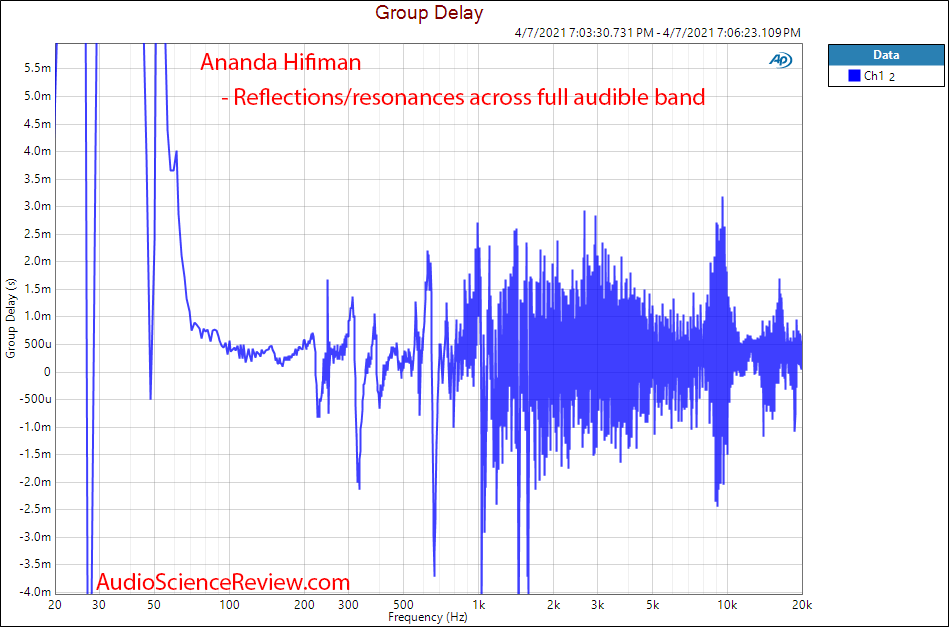 I think this is the worst I have seen it here. Speaking of distortion, we have a lot of it was well: 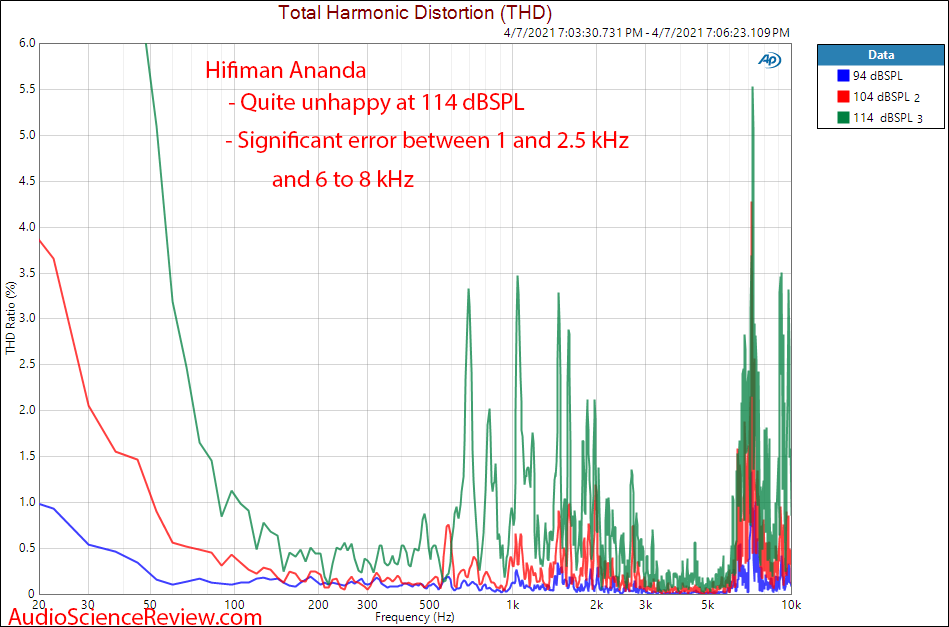 Sure, at lower levels it is not extreme but still, this is not competitive as high-end headphones go. These distortion mechanisms needed to have been found and resolved. Here is the same in absolute at lowest measured level of 94 dBSPL: 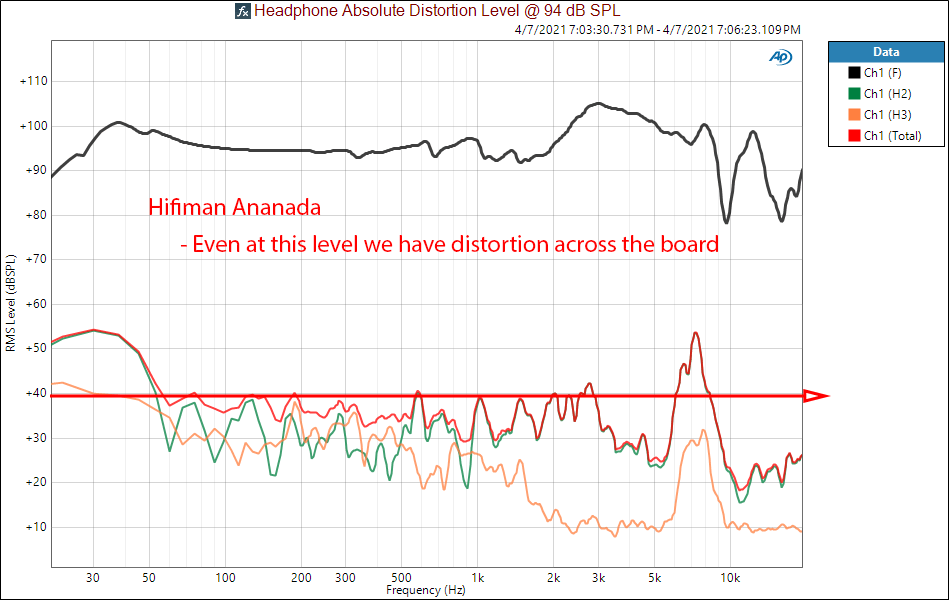 I like to see a clear gap above a few hundred hertz and peak distortion and we don't have it here. Around 7 kHz we actually exceed our target fair bit.

Back to frequency response, here is our deviation from target: 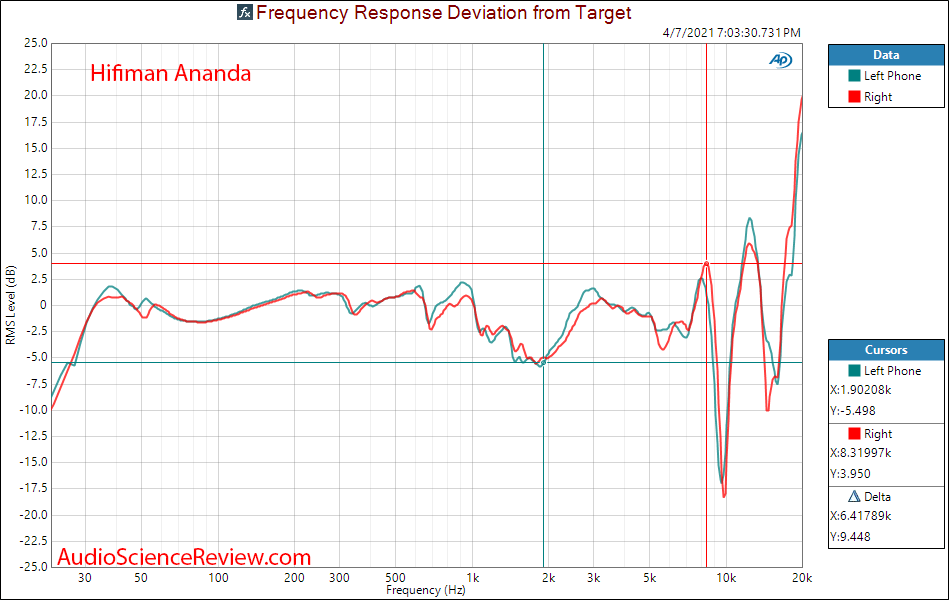 Impedance is flat as is typical in planar magnetic headphones since we basically have traces of wire: 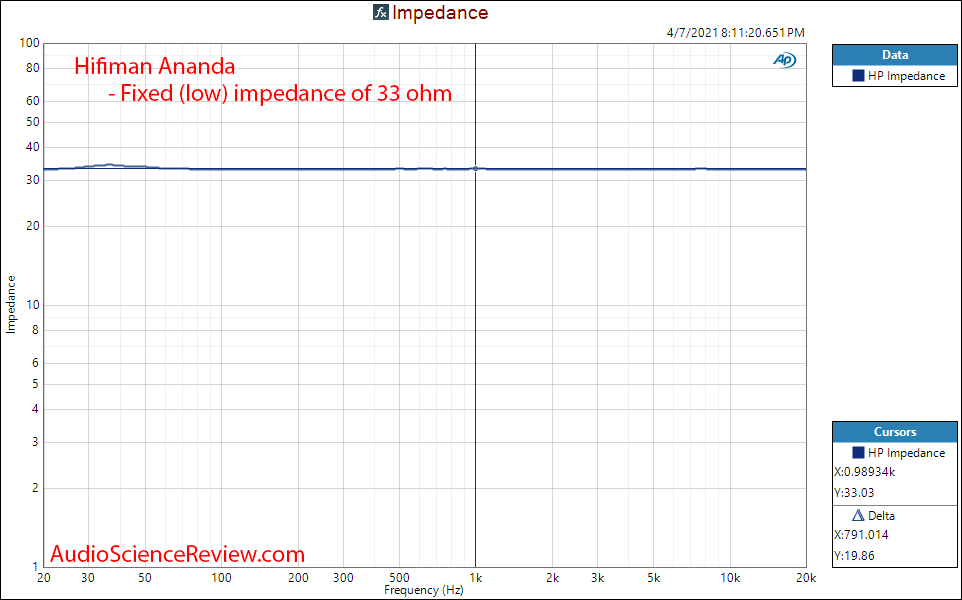 You are in luck as you can use my 33 ohm headphone amp measurements and directly figure out how loud these play. And loud they do given the good sensitivity: 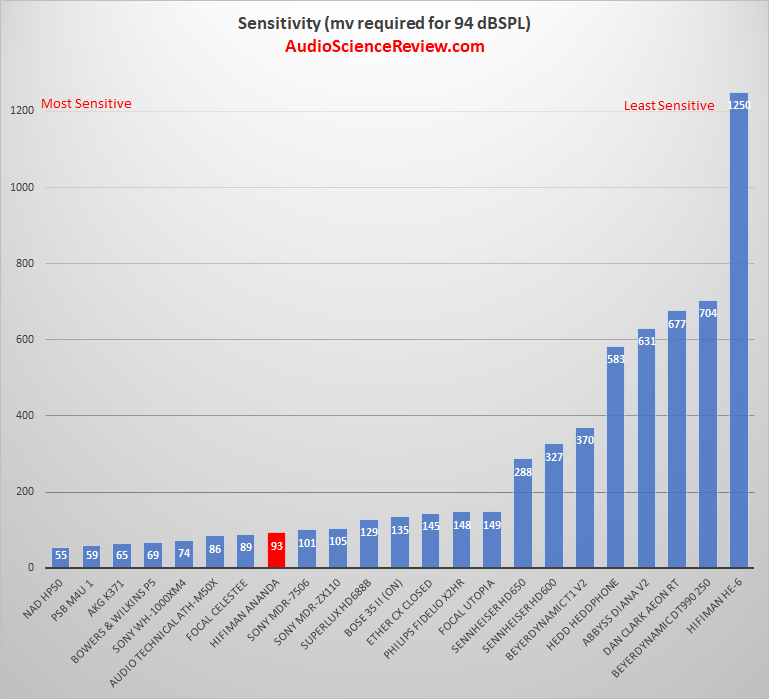 Hifiman Ananda Headphone Listening Tests
Before talking about music listening, let me comment on how loud and piercing the frequency response sweeps were. I almost felt like hearing protection! Not only these thing spit out the sound but do so at elevated levels in highs. So best to not wear them around other people.

Overall experience with music as far as tonality was "eh." There is little sub-bass to make me happy and a bit of brightness because or independent of it. You do get nice sensation of "speakers away from your ear" though which is very pleasing. It nicely pushes the sound out some and leaves room for instruments to image between it and the ear. All of this was not enough to get me to ignore the tonality problems though so the parametric equalization tool came out: 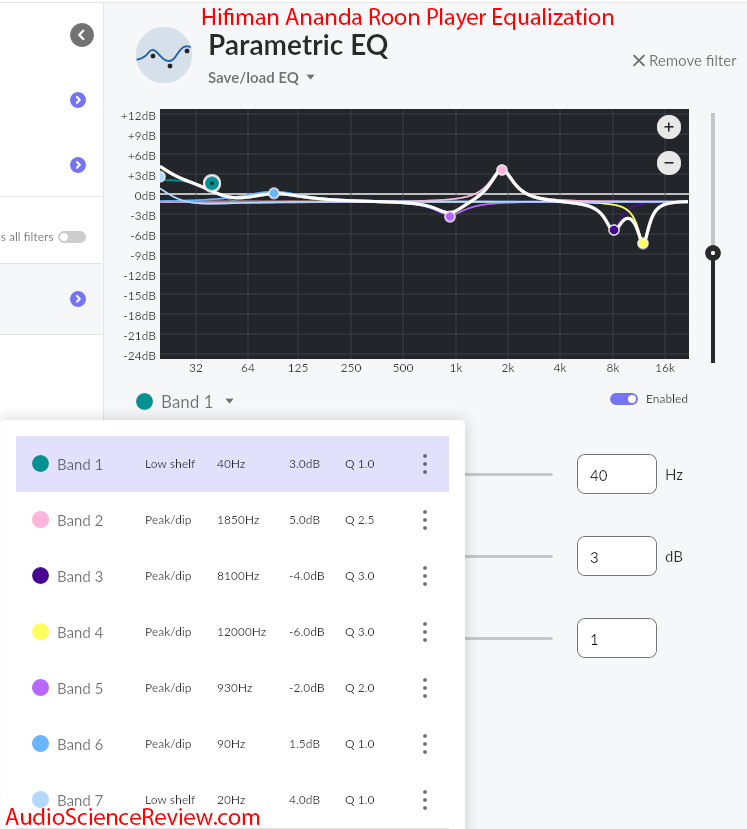 Yes, there is a ton in there. I first pulled up the deficiency in 1 to 3 kHz which as I would have predicted, jazzed up the spatial qualities of this headphone even more. Sound was bright and at first I tried a shelving filter for highs. That didn't do the trick as well as two parametric filters to pull down those peaks in the frequency response. We were close but not quite there. Boosting the sub-bass region first with one shelving filter and then two did the trick to give balance to overall tonality and shave off the remaining brightness.

The sound was good now but still I felt some bass was missing so dialed in the 1.5 dB broad boost centered around 90 Hz. That warmed things up a bit more which was nice. I still had some grunginess I did not like so put in the dip 930 Hz and that helped.

Once there, the transformation was dramatic. The headphone tonality was very nice now and sound super open and pleasing. Alas, after a few minutes of listening, I lost interest in wearing these headphones and focused once more on some grunginess. Mind you, it could just be imagined problem but the final outcome was unlike other headphones that I listen to that are nice. I usually won't stop until I have to do the review. Didn't happen here.

Conclusions
The focus with Hifiman Ananda seems to be "big is good." I agree with that especially when combined with low weight. There is something really nice about wearing two 6 inch speakers suspended on each side of your ear. Alas, many compromises were made in execution of this headphone causing roughness in frequency response in addition to macro tonality issues. Fortunately correcting the tonality also helped with distortion factors but in my opinion, not fully.

If you have this headphone, then I suggest trying the EQ as I have proposed and tune to it taste. The result should be quite satisfying and unique. If you don't have it, I can't recommend that you buy the Hifiman Ananda. It just has too many flaws which I feel the company could have dealt with prior to releasing it.

Unexpected result. I listened to a bunch in the store and the Anandas easily sounded best to me (among the price range I still deem "sane", at least). Kind of surprised by the middling performance here I found the unEQ'ed sound to be quite good, myself.

Strange outcome as I never heard anyone complaining on an Ananda tried right out of the box with no EQ. It confirms my theory, you will never complain if you just spent big money .... even if it sounds that awful like the blue colored picture "group delay" shows. Bring it soon to Mr Fang's knowledge and let's hope he makes some comments on this review!!!

Sundaras next, I hope! Can’t wait!
A

I am glad I didnt buy ananda headphones. Instead got an open box deal at adorama , paid US$550 for he6se v2 , product was absolutely brand new with 1 year warranty.
Ananda means bliss/joy in sanskrit. He6se is definately more ananda-ish - different price bracket ofcourse.

Didn't see this coming (based on most subjective reviews) although maybe people like some "character" a not so good measuring headphone gives?

Did not see this coming. According to Rtings these are very neutral:
https://www.rtings.com/headphones/reviews/hifiman/ananda
A

I do have sundara for a few years now. At us$350 , certainly not bad headphones. Respond well to EQ. Including pad changes. Dekoni he pads increase bass for sure and tame brightness, may be it's old worn out pali pads on my sundara that caused it or my ears/mind, we shall know when Amir reviews sundara.

I'm curious that the Hifiman Arya would do... I had the Ananda/Arya (just because I would like to see what a planar could bring) or the HD800s on my whish list for a step up in my headphone setup. Listening in a store is not a very good option right now, but these reviews help to at least cross one option of the list.
DAC/AMP: Topping E30 / D10s (bridge) and L30 | XDuoo XP-2Pro
Streamer: RPi4 with MoOde Audio in an Akasa Gem Pro case
Desk speakers: Adam t5v
Headphones: Sennheiser HD660s (Equaliser APO: EQ'd based on Oratory1990 Harman), Beyerdynamic DT 770 Pro, Bose qc35
Setup around the house (Multiroom setup): 2x AudioPro C10, AudioPro C3 and AudioPro Link1 -> Marantz NR1403 (pre-amp) -> Syrincs M3-220 DT (active 2.1 system)

Wow! Amazed by the high distortion! And these are a double-sided magnet design, which -'in theory' are supposed to provide lower distortion.

Anmol said:
I do have sundara for a few years now. At us$350 , certainly not bad headphones. Respond well to EQ. Including pad changes. Dekoni he pads increase bass for sure and tame brightness, may be it's old worn out pali pads on my sundara that caused it or my ears/mind, we shall know when Amir reviews sundara.
Click to expand...

I trust only in his judgement s. He nails it every time. I think Sundara will make it better than Ananda, at least more coherent overall. To me Ananda sounded strange when I tried for a few minutes during a summit, so it wasn't a serious testing.

Soundstage said:
Did not see this coming. According to Rtings these are very neutral:
https://www.rtings.com/headphones/reviews/hifiman/ananda
Click to expand...

Yeah, rtings didn't measure anything like the distortion shown on Amir's tests https://www.rtings.com/headphones/1-4/graph#670/4029/589

Narrowly missing the headless panther here I think. Thanks for the review Amir is that the most EQ ever used?
OP

I saw those too. As I noted in the review, no amount of pushing against the pads generated the sub-bass results they show. In addition, in listening tests the sub-bass is just not there. So I have good confidence in my measurements.

In addition I see a lot of smoothing in other measurements posted which get rid of a lot of the fine variations I show.
Amir
Founder, Audio Science Review
Founder, Madrona Digital
Contributing Editor, Widescreen Review Magazine
Click for My Technical Background
My YouTube Channel
OP

Ooh this is going to ruffle some Hifiman stans feathers.