Hi @amirm or anyone

Can you please explain the significance of this test?

I assume it's an important measurement otherwise you wouldn't bother.

Why not measure SINAD at 50 mV instead of SNR? 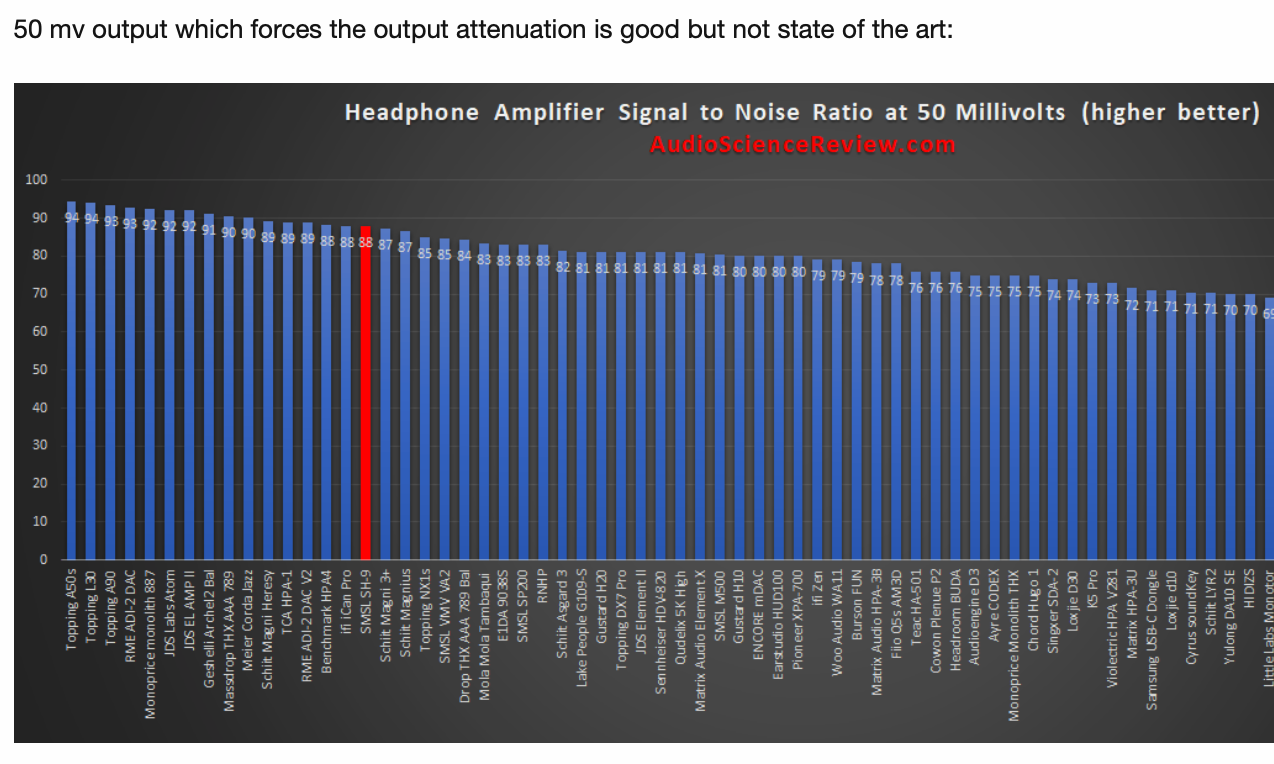 This chart is useful for the highly sensitive IEM's. For example, the Sennheiser HD600 needed 230 mV (rms) to produce 90 dB SPL, whereas the IE 800 only needed 20 to 36 mV (depending on the sample Tyll measured) — a difference in sensitivity of ~20 dB. Therefore, noise at lower output levels is a much bigger concern for sensitive IEM's.

Except for the worst kind of amps, the noise should be dominant at this level. Hence it's equivalent to SINAD for the most part.

And 50mV SNR is probably the most important single digit measurement that reflect real world use condition. (multitone for more information) Although not that better means betterer. But it's the most relevant measurement relatively.

There's one case that this actually matters(audible) which is for ultra sensitive IEMs 140dB/V+. This is also discussed by development of amp in RME ADI2DAC. It can be audible.

I also think it's useful for people who tend to listen at lower volume levels on headphones (particularly sensitive headphones). For example, at 50mv I tested that with a 0dbFS sine wave at 1khz I would be hitting around 85 decibels with my HyperX Cloud II (a more sensitive pair of headphones I own). Since this is peak levels, music will likely sit lower in RMS as the dynamic range is higher. But plenty of people do like to listen to music at lower volume levels than 85db, so this metric can more accurately show how clean the signal is at the levels they realistically listen to music at.

I find this measurment very useful as I only have 32ohm sensitive head/earphones. It becomes even more relevent when the dut has a preout. Last thing I want is my power amps amplifying noise instead of music.
You must log in or register to reply here.
Share: Facebook Google+ Reddit Pinterest Tumblr WhatsApp Email Link