Hello! I'll try to keep this one short on the subjective thoughts. Those will be in my actual review, I just like sharing graphs here first.

The Fluance Ai60 is very affordable powered monitor at just $250. For this price, you get a pair of speakers with 6.5-inch woofers, AptX Bluetooth, RCA, Optical, and USB inputs, a sub out, plus a remote. They're also some of the nicest looking speakers in the price range I've seen, and feel pretty well-built to boot. I'm a big fan of the two-tone look, for which there are three combinations, though they're also available in all black if you're boring or a goth ninja. 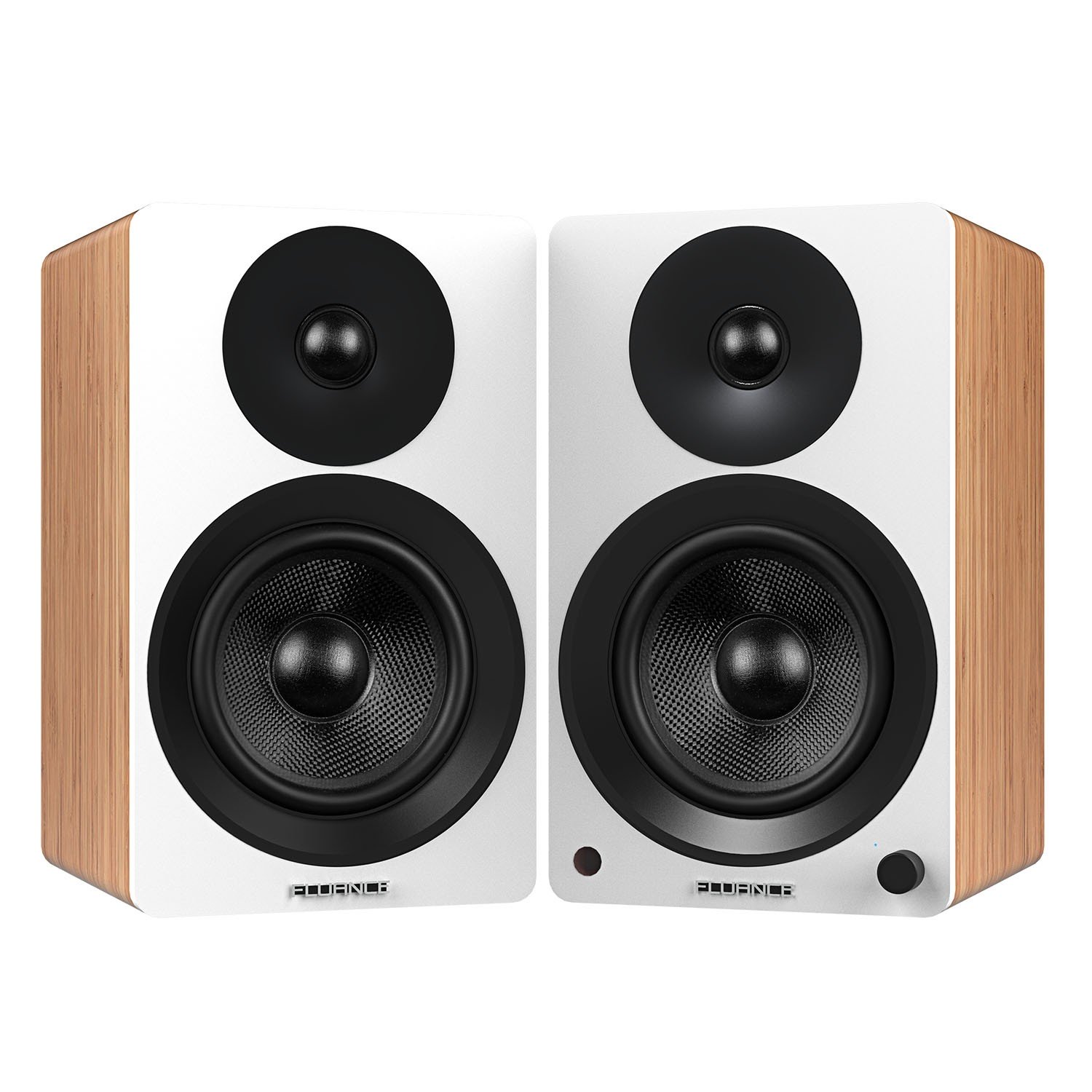 The electronics are in the right speaker, which uses basic lamp wire to plug into the left one. They are a sealed design - no ports anywhere.

Wow! Except... look at that scaling. 120dB, with some really weird smoothing going on, so it's clearly unreliable. And what the heck is "DSP virtual sound?" 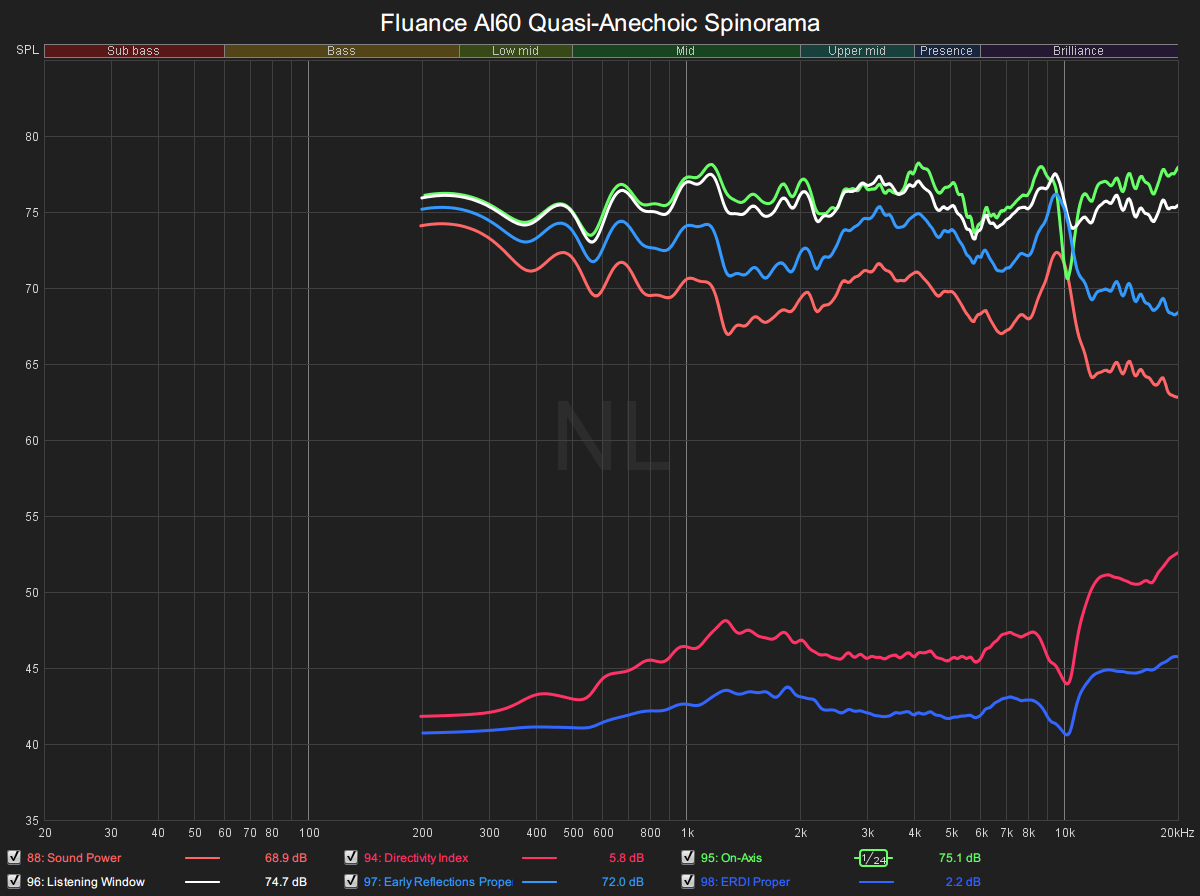 NOTE: No nearfield bass splice for now because I screwed those up; you'll see why in a bit.

Also note I use a significantly taller aspect ratio than Amir. Here's the same measurement scaled to match the Revel M16's:

The Early reflections and Sound Power curves are particularly jagged, but the early reflections DI curve isn't terrible other than that 10KHz dip. Subjectively I thought they sounded pretty good but maybe a bit *cough* unrefined. I think the ERDI curve is good enough below 10KHz though that you can get away with some EQing.

Breaking down directivity a bit more, here is the horizontal SPL plot (note I'm now using 10-degree intervals now instead of my old 15, but REW's pretty new dashed lines help me keep the data from getting too cluttered): 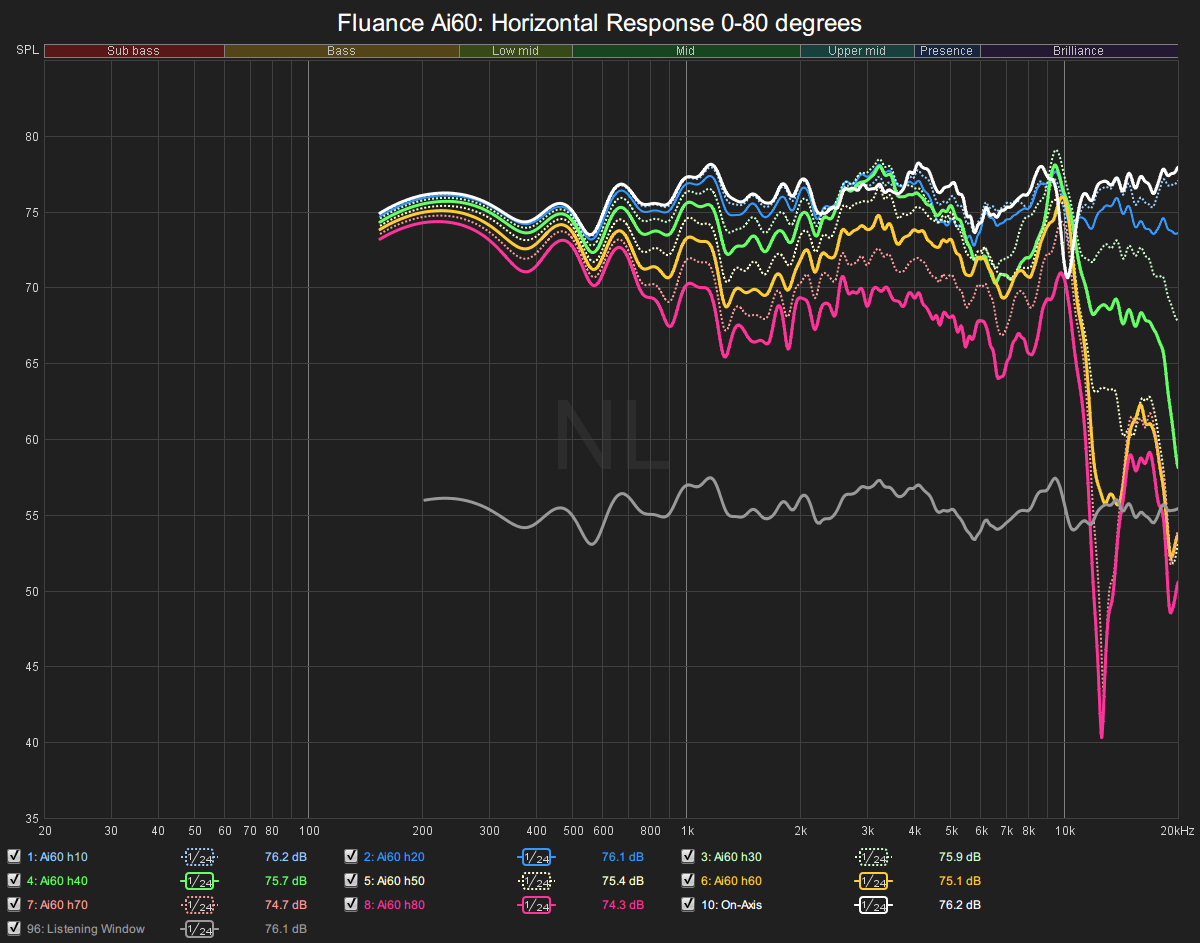 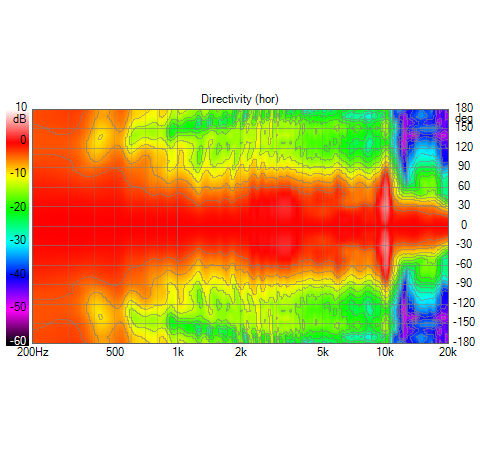 Vertical at 0/5/10/15 degrees above and below tweeter axis + ceiling and floor reflections. 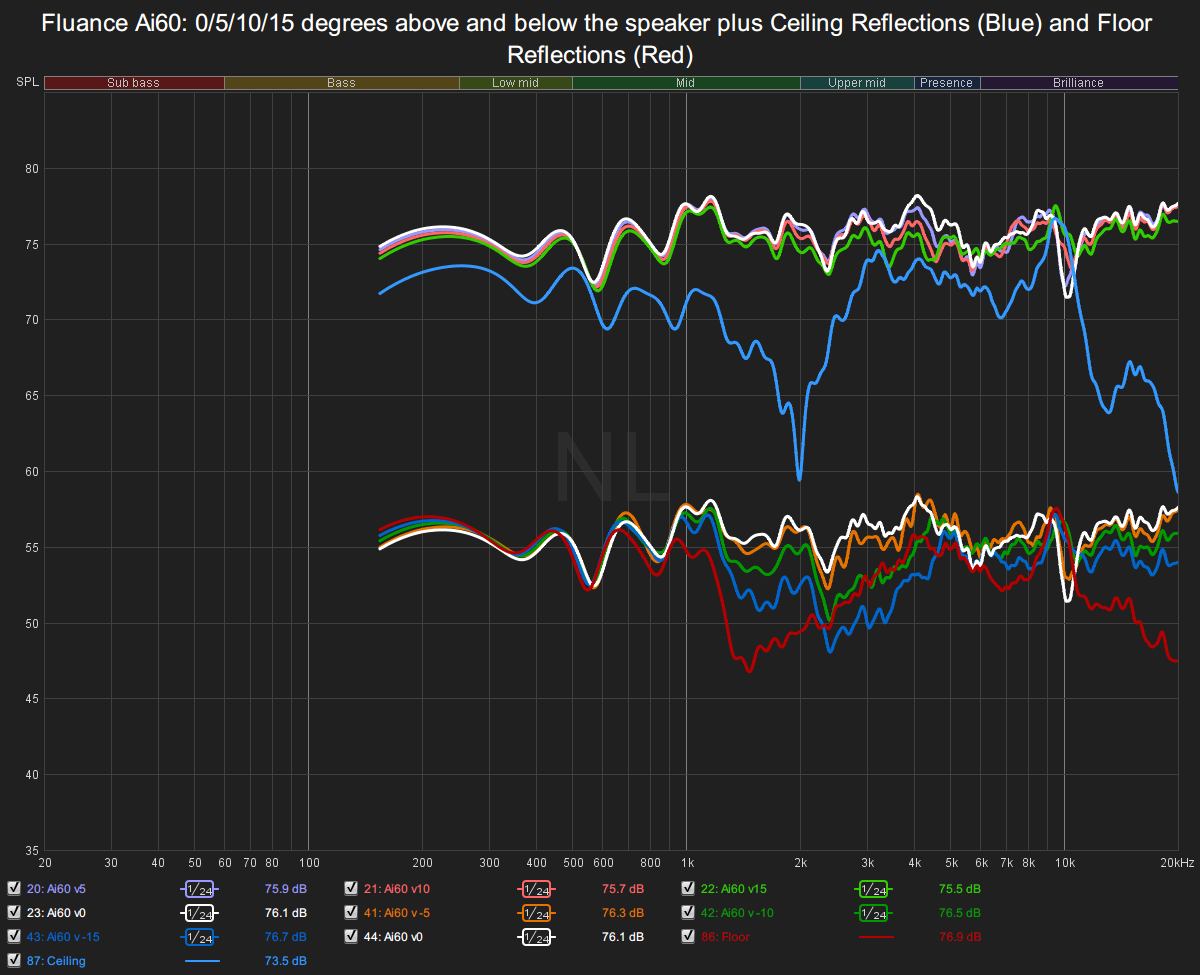 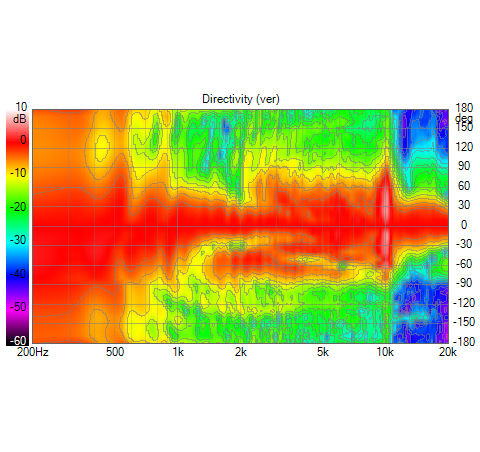 Horizontal is decent, vertical is average for a two-way non coincident. Interestingly, the Ai60 appears to significantly flatter 15 degrees above the tweeter axis! It loses some excess energy in the presence and upper mids regions. So umm, stand up? Or maybe fluance assumed most people would place these too low, such as on a media console, or on a desk without stands? The world may never know.

Lastly, and this is a biggie, the speaker has some weird behavior around volume controls. Specifically, it appears to apply some kind of loudness EQ based on the volume knob setting. It does not appear to do so based on input signal, only the knob level. This is particularly problematic because there is no display to let you see what volume the speakers are at, other than a single LED flashing red when you hit max volume.

I was only able to do some quick and dirty measurements of this effect, but for example, here is the speaker's in-room response at three different knob settings (note what I think is a room null at approx 30Hz) measured from 1m away: 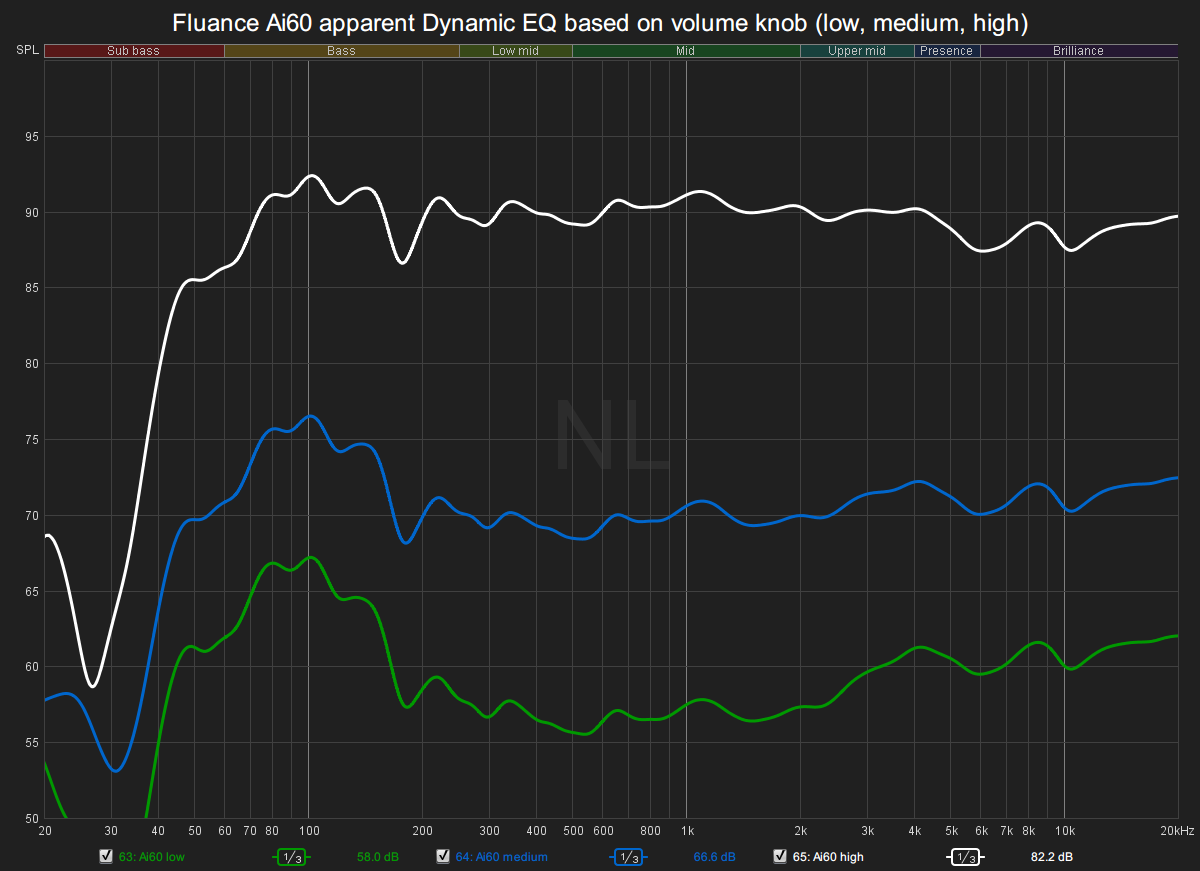 TL;DR: Decent-to-good directivity and bass extension for the price, but I wish on-axis were better given the built-in DSP. I think they could be worth it for the price with some EQ, especially given the design and how many features they pack in. I personally liked them and am happy to recommend them to non-audiophile friends, but the dynamic EQ is annoying and some compression is noticeable when playing loud. They are not the pinnacle of sound quality, but good looking speakers with a good feature set at a good price.

Mainly, just try not to get stabbed by that 10KHz peak off axis peak.

Excellent review, thank you for your work and sharing!
Some comments from Floyd Toole about room curve targets, room EQ and more

The aside about the 8cs is interesting. You have the KH80, I think? Interested to see your thoughts on the cost/benefit vs the 8c. I've got KH80/KH805 and I'm thinking of biting the bullet and getting some 8cs.

Apologies for the OT post. I'll wait for your 8c thread.
OP
N

badboygolf16v said:
The aside about the 8cs is interesting. You have the KH80, I think? Interested to see your thoughts on the cost/benefit vs the 8c. I've got KH80/KH805 and I'm thinking of biting the bullet and getting some 8cs.

I do not want to stay off topic for long, but I'll just say, remember what Dr Toole says that the best speakers are the least flawed. That also means they are the ones that the least flawed for your particular listening situation.

Cardioid directivity plus the fact that EQ based on wall distance is a built-in part of the speakers is a huge deal; the first thing I noticed about the 8Cs was how amazing bass sounded out of the box once I set the distance EQs; something I'll often spend hours tweaking with other speakers plus subs.

Overall they sound great, and they are some of the least fussy speakers I've heard. But I don't think they are inherently amazing in the hi-fi sense of speakers having to be better than one another in this price range. We know past a certain level of linearity that doesn't *really* exist. The 8C are just some of the least flawed speakers I've heard, and it doesn't take much work to get them there.

napilopez said:
but the dynamic EQ is annoying
Click to expand...

When used in the best way for this to work, is it still annoying?
OP
N

Soniclife said:
When used in the best way for this to work, is it still annoying?
Click to expand...

I think it's more annoying for implementation than sonically. You never know how much dynamic EQ you are working with. Unless you are at a high knob volume (it seemes to remain flat a few notches before the max volume setting).

Personally, is much rather just use tone controls, which luckily the remote for these has. However, again, the lack of display hurts it here, as you have to count LED flashes from max to know what your bass or treble levels are.

It's possible that at low volumes you could use the tone controls to bring the bass back down to normal levels, and turn up the volume on your source. I did not test this though.
T

" I noticed there was just too much bass, and after thinking I'd messed up my baffle step compensation for a while, I realized it was because the speaker was applying dynamic EQ when I'd turned down the knob for the nearfield measurement. "

Thank you for confirming what I noticed after purchasing these! The bass was so overdone, it sounds like the DSP was designed by a bass player (Full disclosure: I'm a bass player). Interestingly, this seemed moreso with the Bluetooth input than with the RCA input, which is odd. I suppose it's nice if you're watching movies but it's just too thick and wubby for music. :/ Sending mine back. Will try the Vanatoo Zeros.
R

I tried the Fi50 bluetooth speaker from Fluance and it also had an ungodly amount of bass boost. I sent it back.
T

napilopez said:
It's possible that at low volumes you could use the tone controls to bring the bass back down to normal levels, and turn up the volume on your source. I did not test this though.
Click to expand...

I tried all combinations of high/low input levels and still had to pull the bass down to its lowest setting. Still too much, at least with the Bluetooth input.
You must log in or register to reply here.